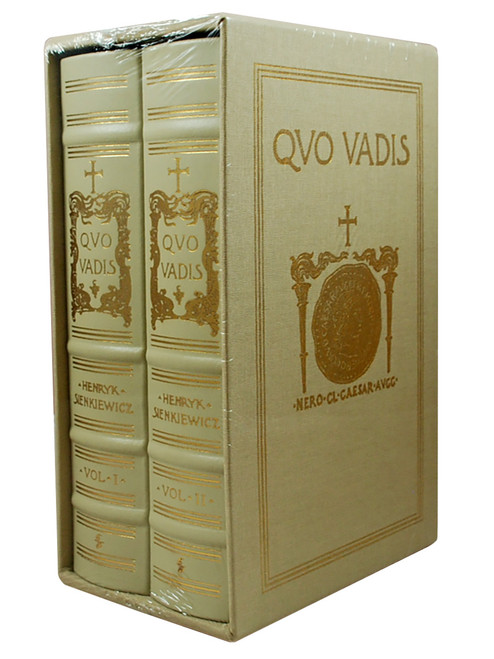 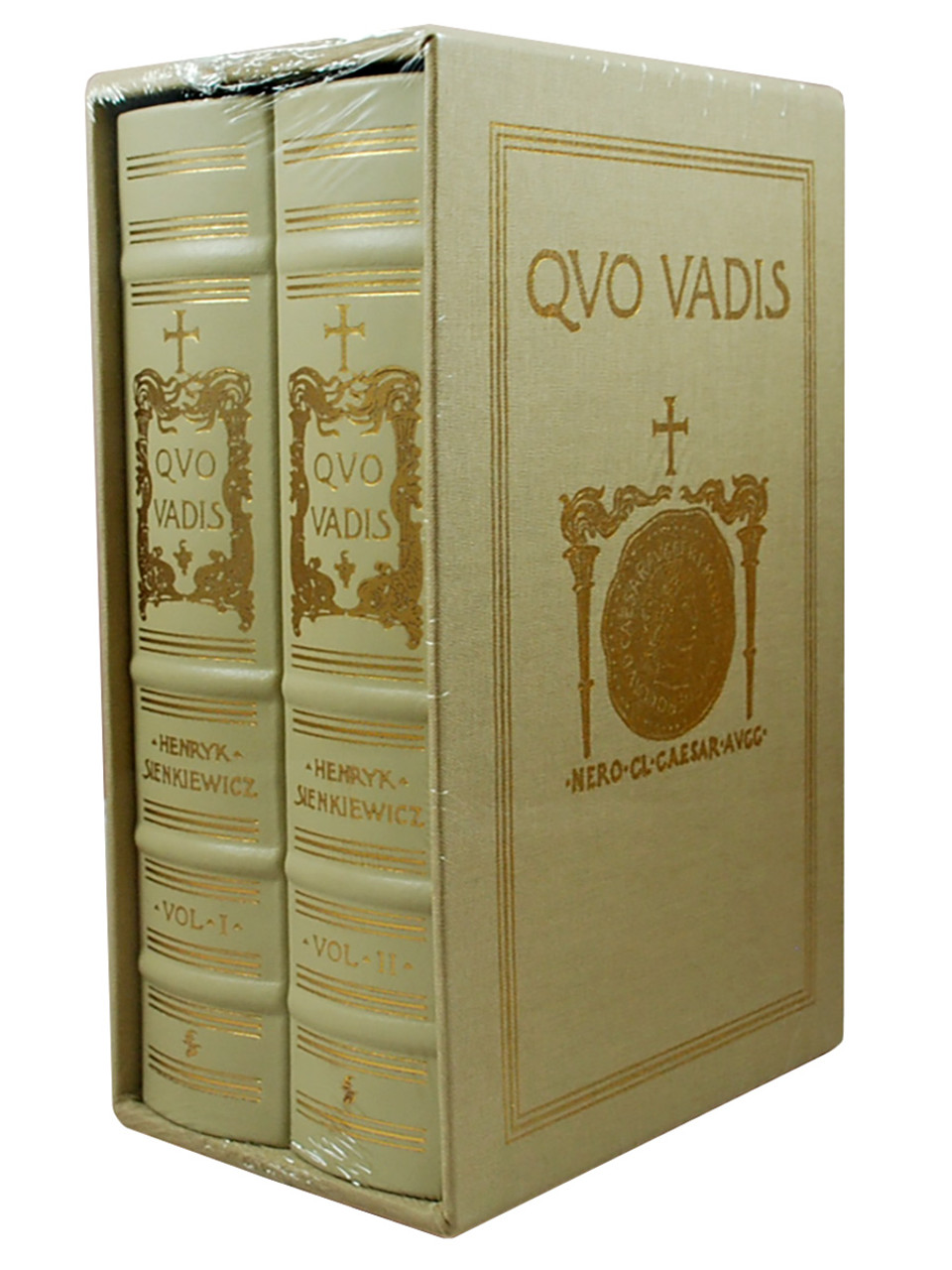 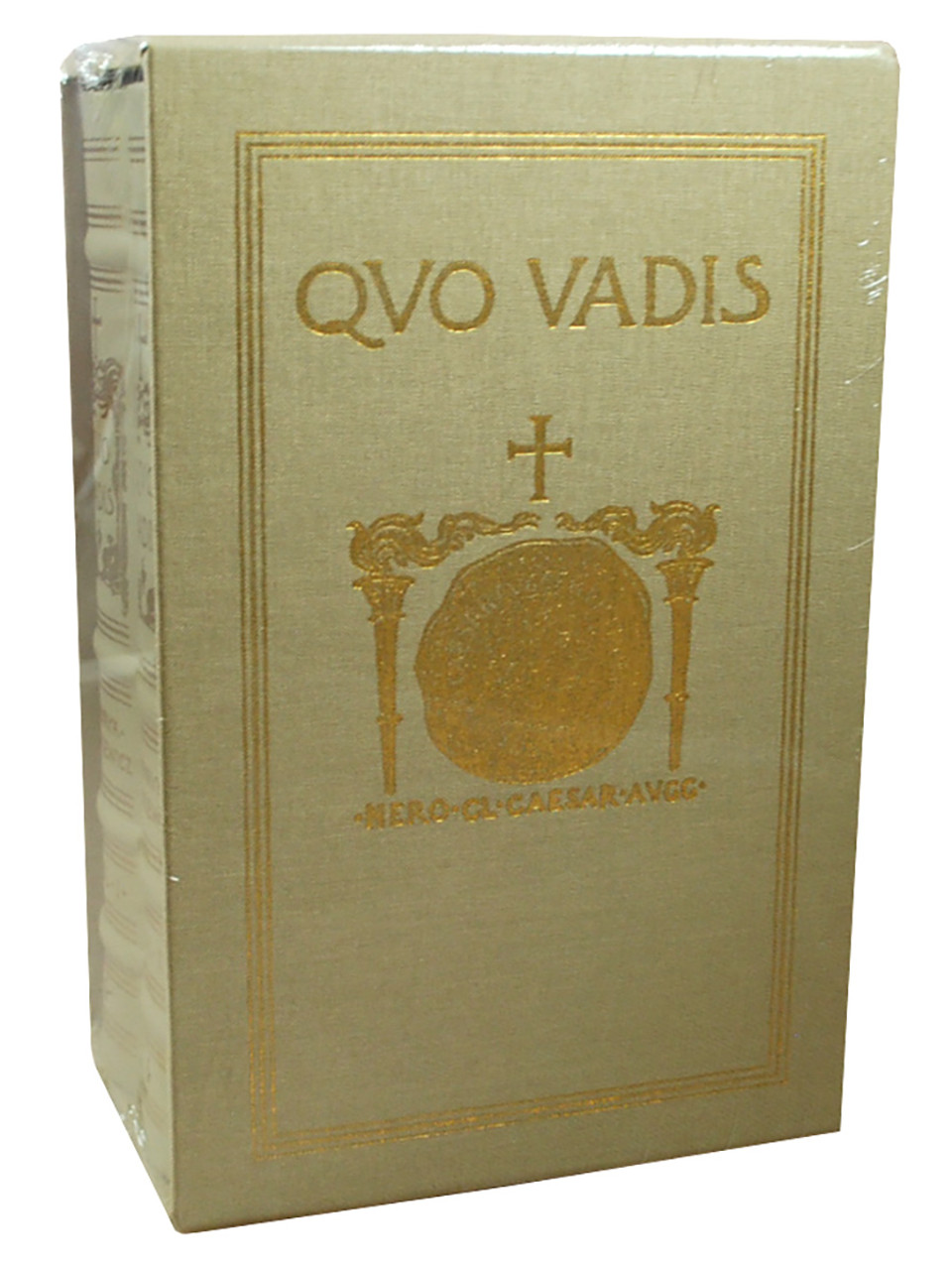 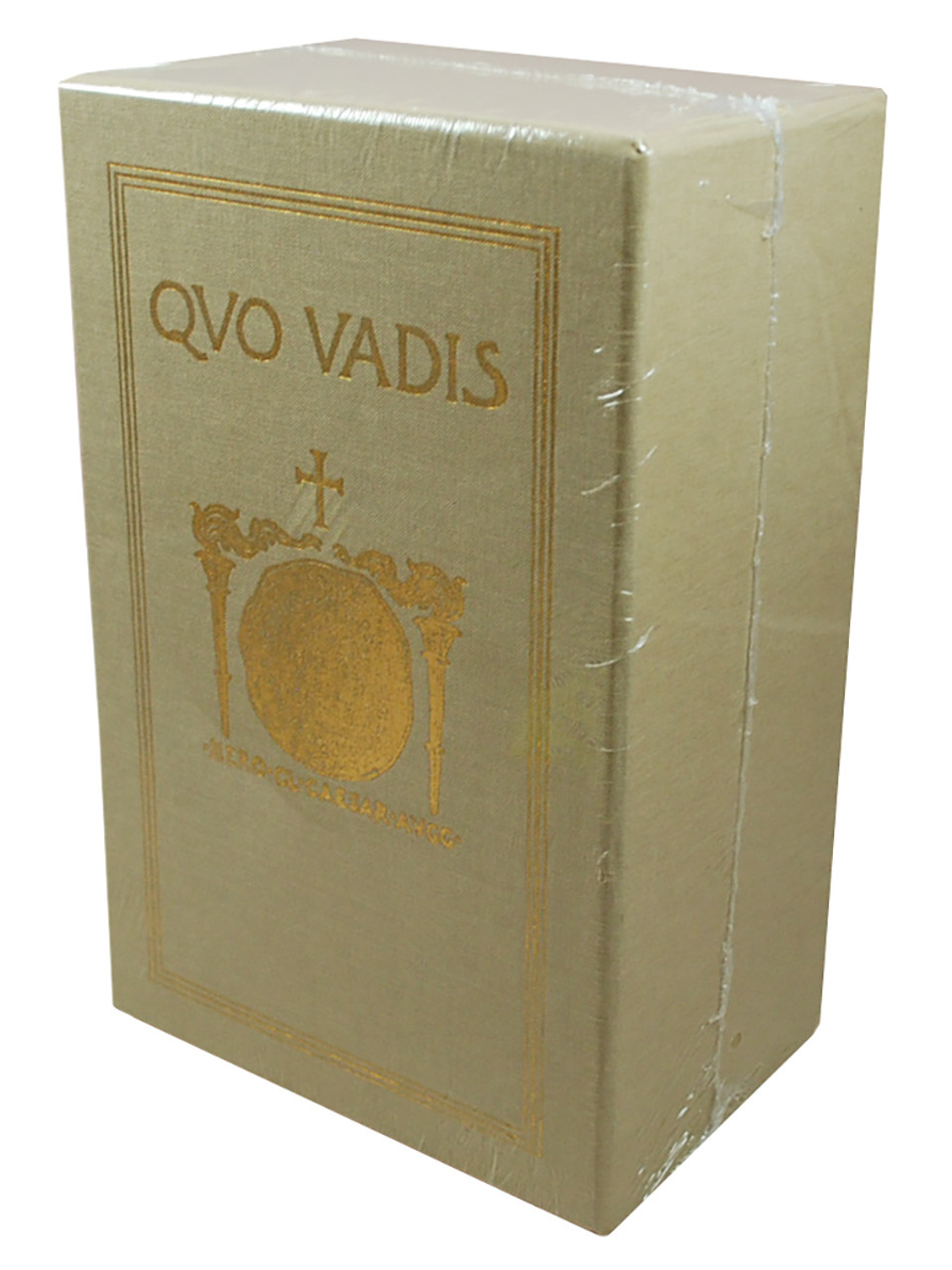 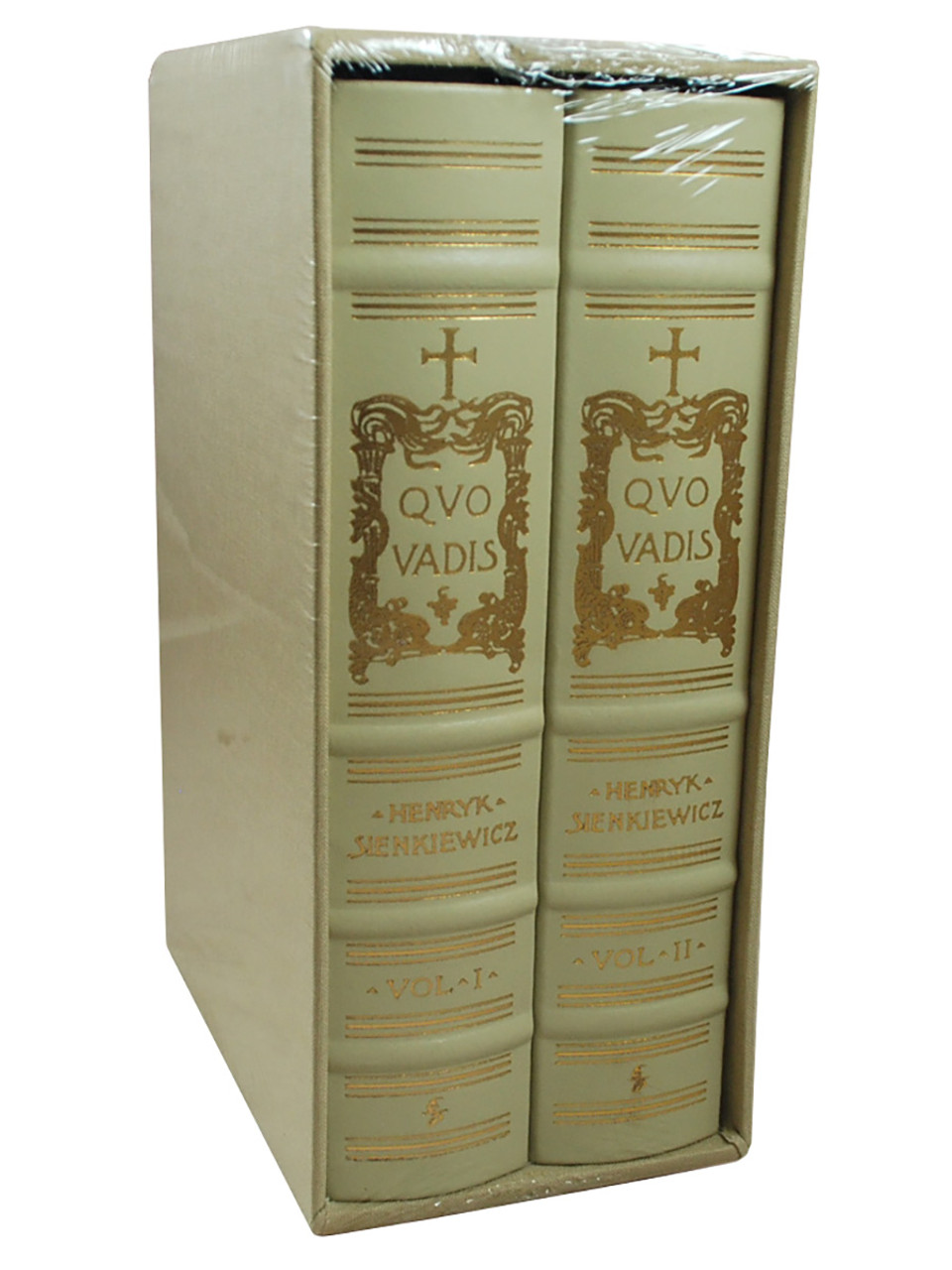 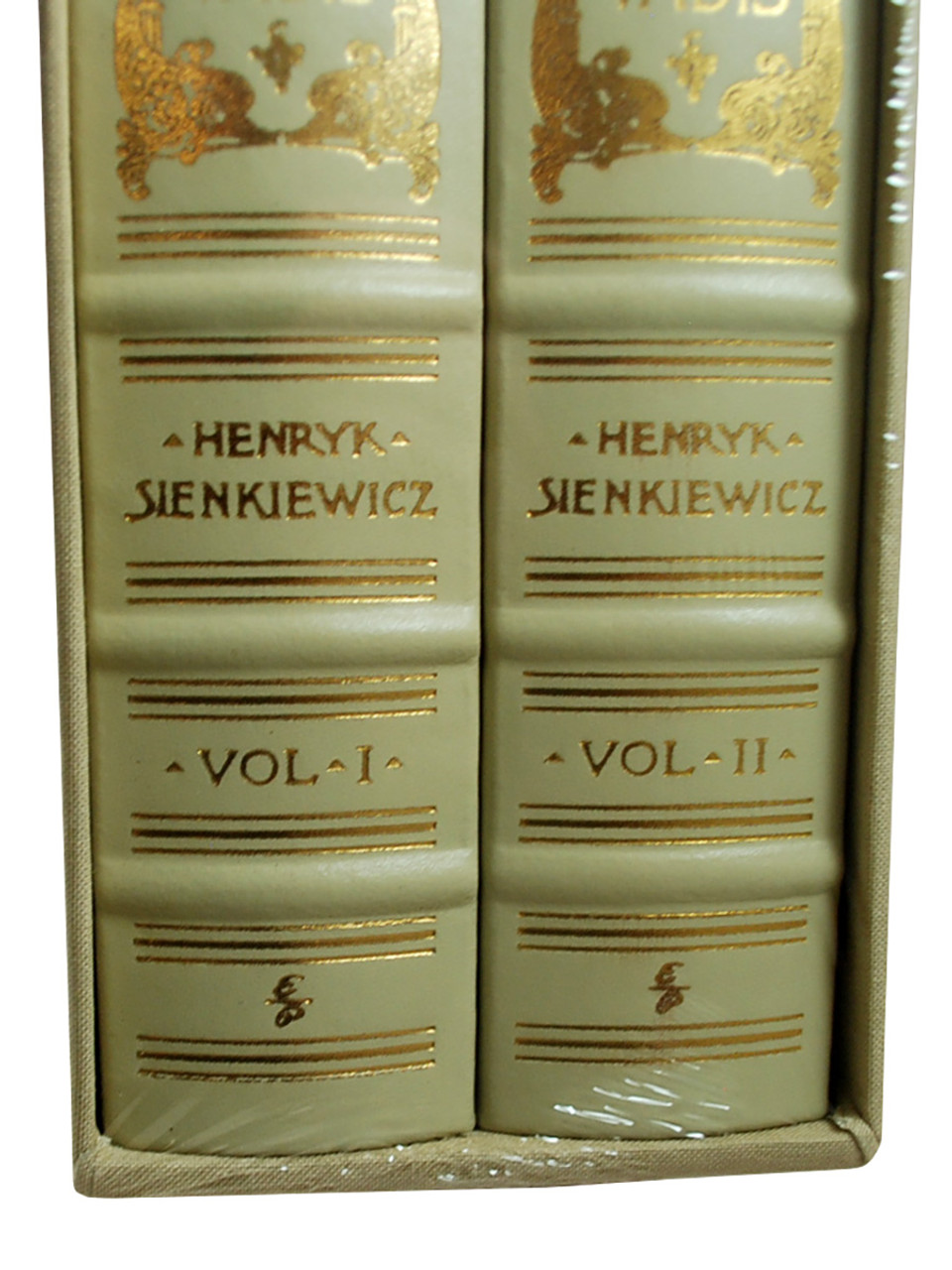 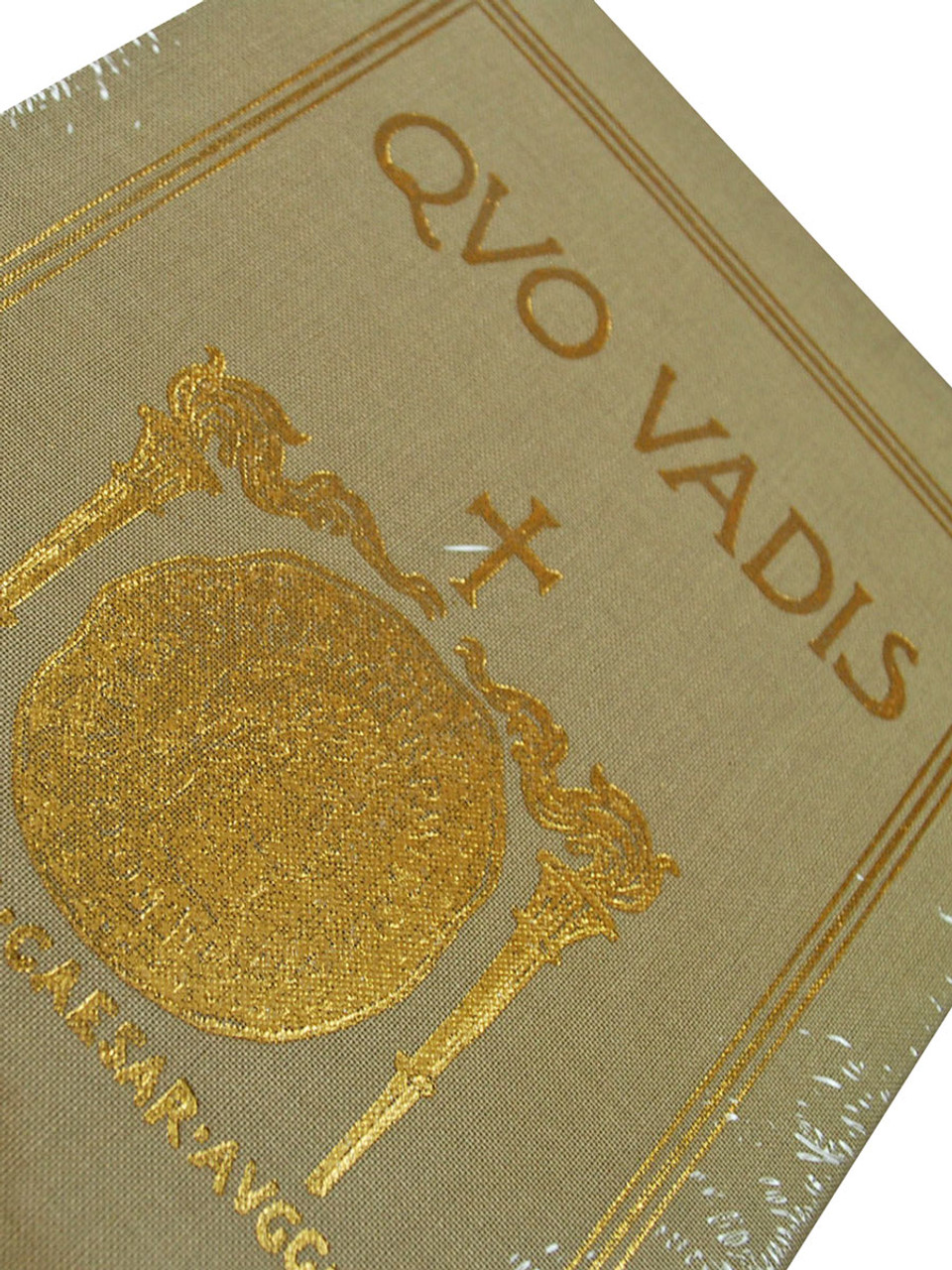 A Luxurious Limited Edition Of Only 700 Produced.

Easton Press, Norwalk CT. Henryk Sienkiewicz "Quo Vadis: A Narrative of the Time of Nero". Deluxe Limited Edition of only 700 produced. Luxuriously bound in full genuine leather. This 2-volume slipcased set is in new condition without any flaws. Sealed.

Quo Vadis, is a historical novel written by Henryk Sienkiewicz. The novel Quo Vadis tells of a love that develops between a young Christian woman, Ligia, and Marcus Vinicius, a Roman patrician. It takes place in the city of Rome under the rule of emperor Nero around AD 64. Sienkiewicz studied the Roman Empire extensively prior to writing the novel, with the aim of getting historical details correct. As such, several historical figures appear in the book. As a whole, the novel carries an outspoken pro-Christian message. This novel contributed to Sienkiewicz's Nobel Prize for literature. 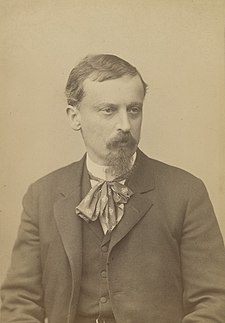 Henryk Adam Aleksander Pius Sienkiewicz ( 5 May 1846 – 15 November 1916), also known by the pseudonym Litwos , was a Polish journalist, novelist and Nobel Prize laureate. He is best remembered for his historical novels, especially for his internationally known best-seller Quo Vadis (1896).

Born into an impoverished Polish noble family in Russian-ruled Congress Poland, in the late 1860s he began publishing journalistic and literary pieces. In the late 1870s he traveled to the United States, sending back travel essays that won him popularity with Polish readers. In the 1880s he began serializing novels that further increased his popularity. He soon became one of the most popular Polish writers of the turn of the 19th and 20th centuries, and numerous translations gained him international renown, culminating in his receipt of the 1905 Nobel Prize in Literature for his "outstanding merits as an epic writer."

Many of his novels remain in print. In Poland he is best known for his "Trilogy" of historical novels – With Fire and Sword, The Deluge, and Sir Michael – set in the 17th-century Polish–Lithuanian Commonwealth; internationally he is best known for Quo Vadis, set in Nero's Rome. The Trilogy and Quo Vadis have been filmed, the latter several times, with Hollywood's 1951 version receiving the most international recognition. 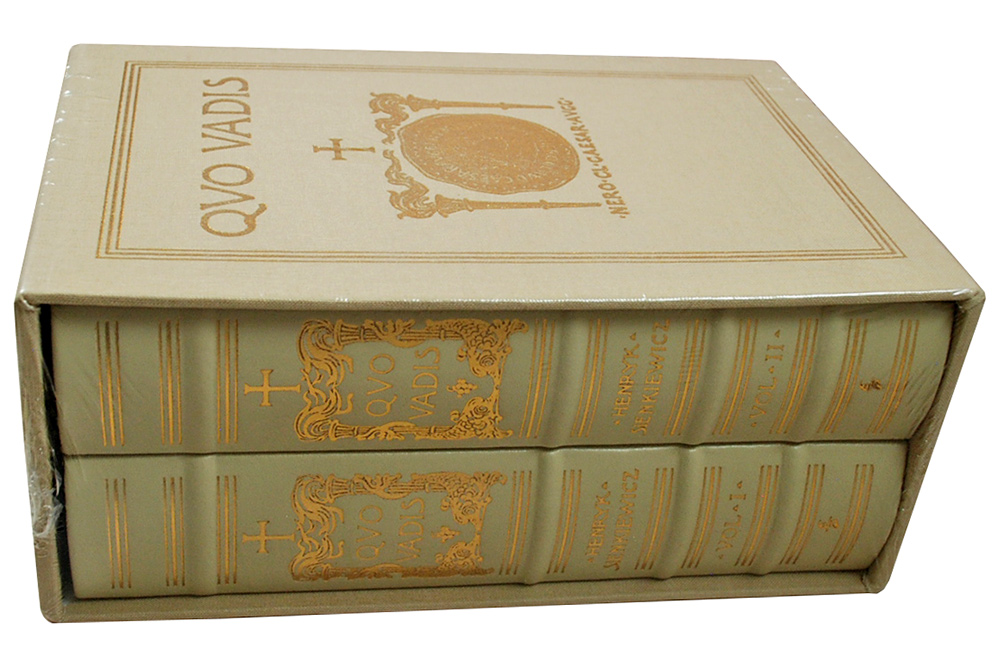 Set at a turning point in history (A.D. 54-68), as Christianity replaces the era of corruption and immorality that marked Nero’s Rome, Quo Vadis abounds with compelling characters, including:

Vinicius, the proud centurion who has fallen deeply in love with a mysterious young woman who disappears the night they meet; Ligia, the elusive beauty. Vinicius will not easily win her love, for she is a Christian, one of the group of dedicated believers led by the apostle Peter. Christians are rare in pagan, hedonistic Rome, and suffer great persecution;

Petronius, uncle to Vinicius, an elegant, witty courtier who scoffs at love and religion but finds his nephew’s passion charming; and

Nero himself, enemy of all Christians, a despotic emperor who plunges Rome deeper and deeper into depravity. The decadence of his banquets is staggering; and even worse, his mad laughter is heard echoing in the amphitheater as gladiators duel to the death.

As Nero’s appalling plans for the Christians become ever clearer, time appears to be running out for the young lovers. Vinicius must come to understand the true meaning of Ligia’s religion before it is too late. 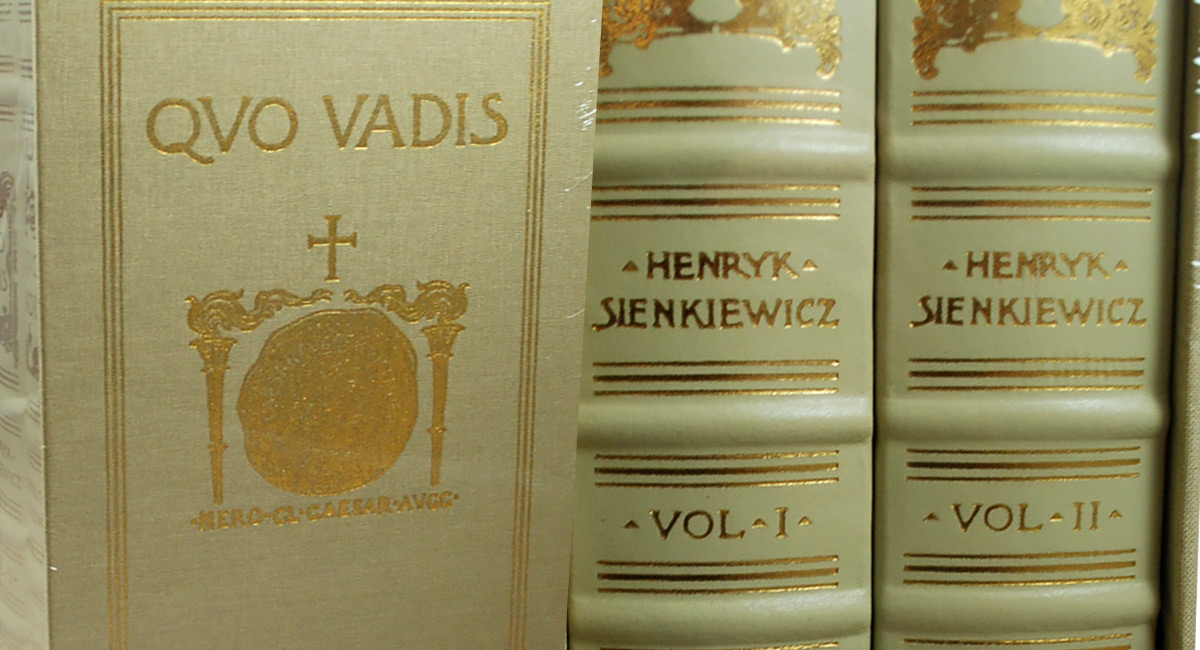 Quō vādis?  is a Latin phrase meaning "Where are you marching?". It is also commonly translated as "Where are you going?" or, poetically, "Whither goest thou?".

It also may refer to a Christian tradition regarding Saint Peter. According to the apocryphal Acts of Peter (Vercelli Acts XXXV), Peter flees from crucifixion in Rome at the hands of the government, and along the road outside the city, he meets the risen Jesus. In the Latin translation, Peter asks Jesus, "Quō vādis?" He replies, "Rōmam eō iterum crucifīgī" ("I am going to Rome to be crucified again"). Peter then gains the courage to continue his ministry and returns to the city, where he is martyred by being crucified upside-down.  The Church of Domine Quo Vadis in Rome is built where the meeting between Peter and Jesus allegedly took place. The words "quo vadis" as a question also occur at least seven times in the Latin Vulgate.

The Polish writer Henryk Sienkiewicz wrote the novel Quo Vadis: A Narrative of the Time of Nero (1895–96), which in turn has been made into motion pictures several times, including a 1951 version that was nominated for eight Academy Awards. For this and other novels, Sienkiewicz received the 1905 Nobel Prize for Literature.

In a season four episode of M*A*S*H entitled "Quo Vadis, Captain Chandler?" the reference pertains to Jesus Christ. A shellshocked officer arrives at the Hospital believing he is the Christ. He has numerous conversations with the characters, including Father Mulcahy. He ultimately leaves the MASH unit for an evacuation hospital, still unrecovered.

Quo Vadis: A Narrative of the Time of Nero, commonly known as Quo Vadis, is a historical novel written by Henryk Sienkiewicz in Polish.

The novel Quo Vadis tells of a love that develops between a young Christian woman, Lygia (Ligia in Polish) and Marcus Vinicius, a Roman patrician. It takes place in the city of Rome under the rule of emperor Nero, c. AD 64.

Sienkiewicz studied the Roman Empire extensively before writing the novel, with the aim of getting historical details correct. Consequently, several historical figures appear in the book. As a whole, the novel carries a pro-Christian message.

It was first published in installments in the Gazeta Polska between 26 March 1895 and 29 February 1896,[5][6] as well as in two other journals, Czas and Dziennik Poznański, starting two and three days later. It was published in book form in 1896 and has been translated into more than 50 languages. The novel contributed to Sienkiewicz's Nobel Prize for literature in 1905.

Several movies have been based on Quo Vadis, including two Italian silent films in 1913 and in 1924, a Hollywood production in 1951, a 1985 miniseries directed by Franco Rossi, and a 2001 adaptation by Jerzy Kawalerowicz.