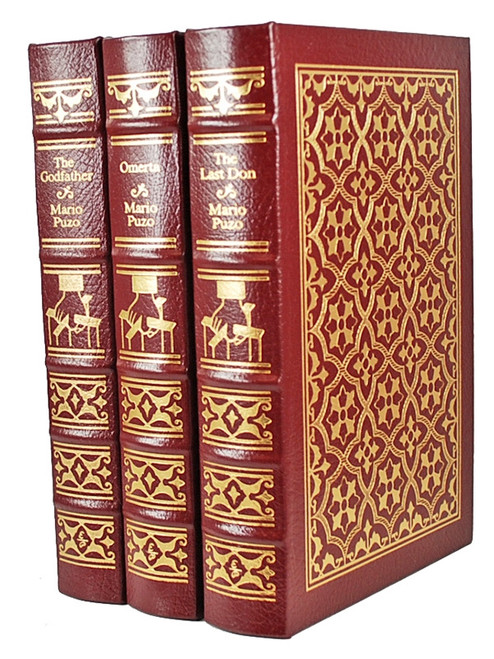 "I think [The Godfather] is a perfectly-executed book, with great invention of story." --Mario Puzo

Easton Press, Norwalk CT. Mario Puzo "The Godfather Trilogy". A limited collector's edition, luxuriously bound in full genuine leather. More than thirty years ago, a classic was born. A searing novel of the Mafia underworld, The Godfather introduced readers to the first family of American crime fiction, the Corleones, and the powerful legacy of tradition, blood, and honor that was passed on from father to son.


A complete three volume set that includes the following titles:


With its themes of the seduction of power, the pitfalls of greed, and family allegiance, it resonated with millions of readers across the world-and became the definitive novel of the virile, violent subculture that remains steeped in intrigue, in controversy, and in our collective consciousness. A leather bound heirloom, as new , in the original shrink-wrap from the publisher without any flaws.

The Godfather has sold 21 million copies and has remained 67 weeks on the bestseller list.

Mario Gianluigi Puzo (October 15, 1920 - July 2, 1999) was an Italian American author and screenwriter, known for his novels about the Mafia, including The Godfather (1969), which was later co-adapted into a film by Francis Ford Coppola. He won the Academy Award for Best Adapted Screenplay in both 1972 and 1974.

Mario Puzo has here created an extraordinary novel; it pulsates with dramatic and evil incident, brute rage, and the naked terror of an infamous underworld. Puzo takes us inside the violence-infested society of the Mafia and its gang wars. He shows us its trials by gunfire and torture and the nature of Mafia friendship. The Godfather is essentially the story of a man and his power, and it is a reading experience one is not likely to forget.

The Godfather is Mafia leader Vito Corleone, benevolent despot who stops at nothing to gain and hold power.

The Godfather is a friendly man, a "reasonable" man, a just man -- and the deadliest gang leader in the Cosa Nostra.

The Godfather's command post is a fortress on Long Island, from which he presides over a vast underground empire that encompasses the rackets, gambling, bookmaking, and unions. Tyrant, blackmailer, murderer -- he gives his friendship (no man dares refuse it), rights wrongs (even murder is not too great a price for "justice"). His influence runs through all levels of American society, from the cop on the beat to the nation's mighty.

Mario Puzo introduces us to an extraordinary gallery of men and women and re-creates the feudal world of the Mafiosi. The elements of this world explode electrically to life in this violent and impassioned chronicle. It is a spellbinding story, written with authentic knowledge of this particular milieu and with the hand of a master storyteller.


About The Last Don

The Last Don is a novel by Mario Puzo, best known as the author of The Godfather.The story alternates between the film industry and the Las Vegas Strip casinos, showing how the Mafia is linked to them both.

Omertà is a novel by Mario Puzo, published posthumously in 2000. It was first published by Ballantine Books. Omertà follows the story of Don Aprile's adopted "nephew" Astorre Viola. This is the final book in Puzo's mafia trilogy. The first two were The Godfather and The Last Don.

Puzo never saw the publication of Omertà, but the manuscript was finished before his death, as was the manuscript for The Family. In a review originally published in the San Francisco Chronicle, Jules Siegel, who had worked closely with Puzo at Magazine Management Company, speculated that Omertà may have been completed by "some talentless hack." Siegel also acknowledges the temptation to "rationalize avoiding what is probably the correct analysis – that [Puzo] wrote it and it is terrible."

Each volume is a wonderful bright clean copy free of any markings, writings, or stamps. Sharp corners that are not bumped. Tight and square spine. Unread books. No attached bookplates or indication of any removed.