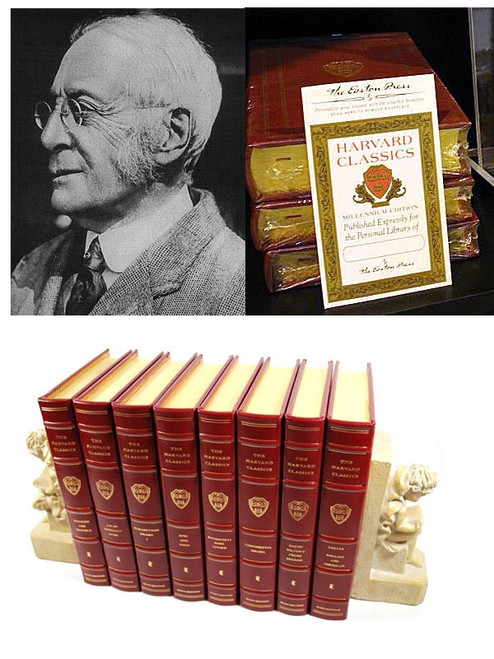 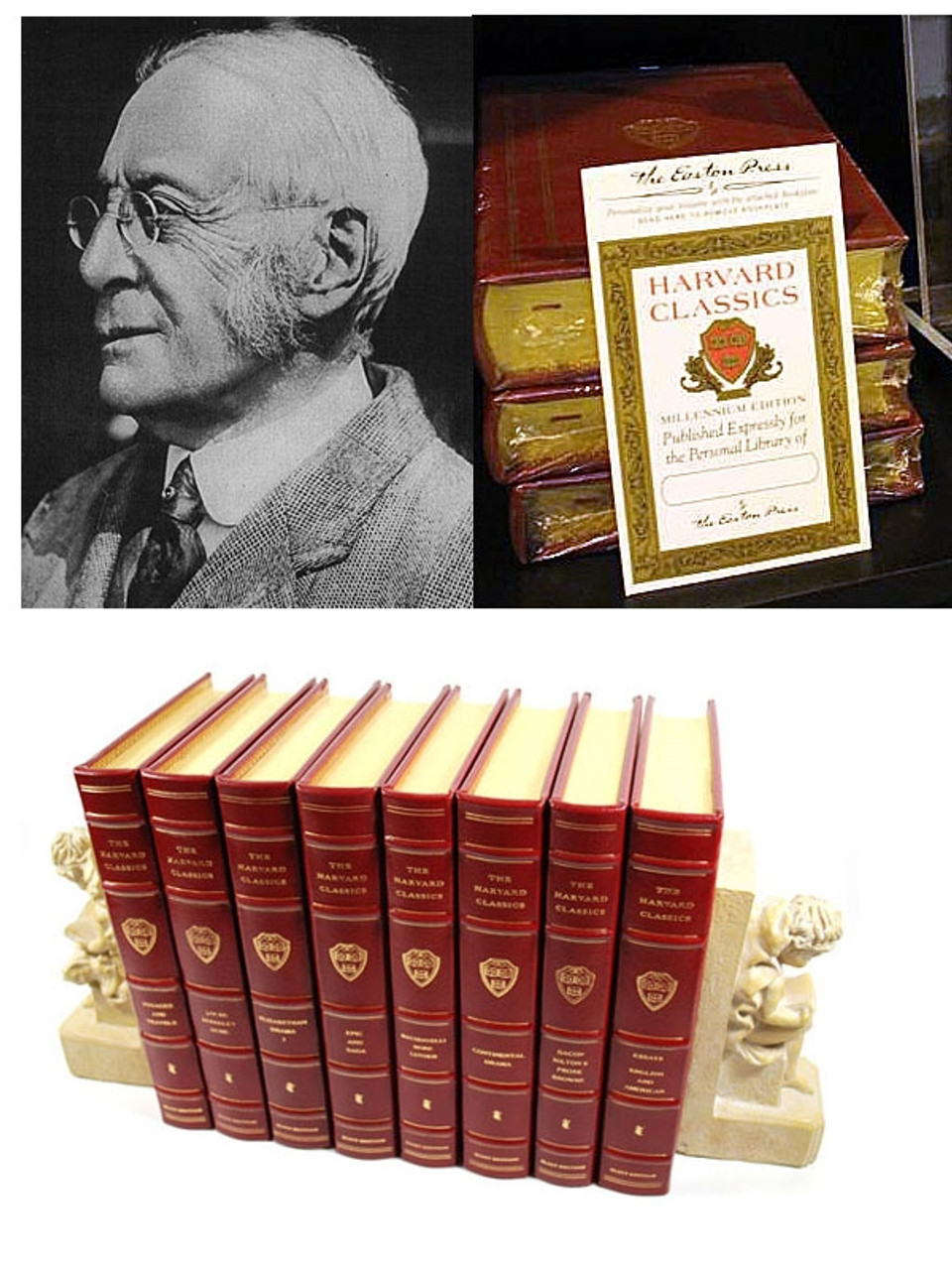 "The Five Foot Shelf of Knowledge": A Grand 50 Volume Collection of The Harvard Classics
Limited Edition - Collector's Set. A truly unique and fascinating set to showcase in your home library or office. This edition is designed to outlast other printings of The Harvard Classics, and will make an enduring and luxurious addition to your own collection. Leather bound edition.


In 1910, Dr. Charles W. Eliot, then President of Harvard University, assembled an exceptional library of "all the books needed for a real education." This is the complete and full matching set, luxuriously bound in genuine leather. This collection features 1,850 works by over 300 poets, philosophers, scientists, explorers, and many others.

Ideal For the Scholar: A Complete and Matching 50 volume Set!
The Harvard Classics, Easton Press, Norwalk, Ct. 1994. Dr. Charles W. Eliot, "Five Foot Shelf of Books. " Millennium Edition. This is a complete set of 50 volumes in Very Fine condition. All bookplates are unattached and unmarked. Includes the original publisher issued "Cross Reference Guide" card. This handy guide provides an invaluable card for referring back to the appropriate volume in the Harvard Classics collection. The cross-reference card measures 5"x8".

The complete collection. Bound in full genuine leather. Front and back covers gilt-stamped in 22 kt gold with veritas emblem of Harvard University. All edges cased in gilt. Spine lettering gilt, with Eliot Edition noted. Illustrated frontis in each, with protective tissue. Holographic endpapers of genuine silk, with gilt tooling on turn-ins. Red silk bookmarks in each. Each volume measures 6"x9".

Printed on archival quality paper, especially milled for this edition (as stated).


This collection includes the following titles: 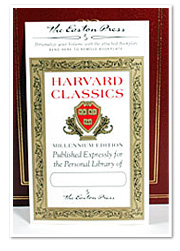 Charles William Eliot (March 20, 1834 - August 22, 1926) was an American academic who was selected as Harvard's president in 1869. He transformed the provincial college into the preeminent American research university. Eliot served the longest term as president in the university's history.

Under Eliot, Harvard became a national institution, recruiting its students from around the country using standardized entrance examination and hiring distinguished scholars from home and abroad. Eliot was an administrative reformer, reorganizing the university's faculty into schools and departments and replacing recitations with lectures and seminars. During his forty year presidency, the university vastly expanded its facilities, with laboratories, libraries, classrooms, and athletic facilities replacing simple colonial structures. Eliot attracted the support of major donors from among the nation's growing plutocracy, making it the wealthiest private university in the world.

Eliot's leadership not only made Harvard the pace-setter for other American colleges and universities, but a major figure in the reform of secondary school education. Both the elite boarding schools, most of them founded during his presidency, and the public high schools shaped their curricula to meet Harvard's demanding standards. Eliot was a key figure in the creation of standardized admissions examinations, as a founding member of the College Entrance Examining Board.

As leader of the nation's wealthiest and best-known university, Eliot was necessarily a celebrated figure whose opinions were sought on a wide variety of matters, from tax policy (he offered the first coherent rationale for the charitable tax exemption) to the intellectual welfare of the general public. He edited the Harvard Classics, which together are colloquially known as his Five Foot Shelf and which were intended at the time to suggest a foundation for informed discourse.

Eliot was a fearless crusader not only for educational reform, but for many of the goals of the progressive movement -- whose most prominent figure head was Theodore Roosevelt (Class of 1880) and most eloquent spokesman was Herbert Croly (Class of 1889). He was also involved in philanthropy, serving as a trustee of the Rockefeller Foundation from 1914 to 1917.

Order Now! Arrives in 2 to 3 weeks. Due to the weight of this item, expedited shipping is not available.