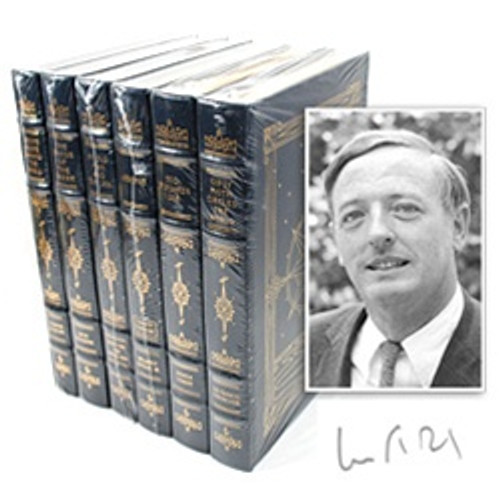 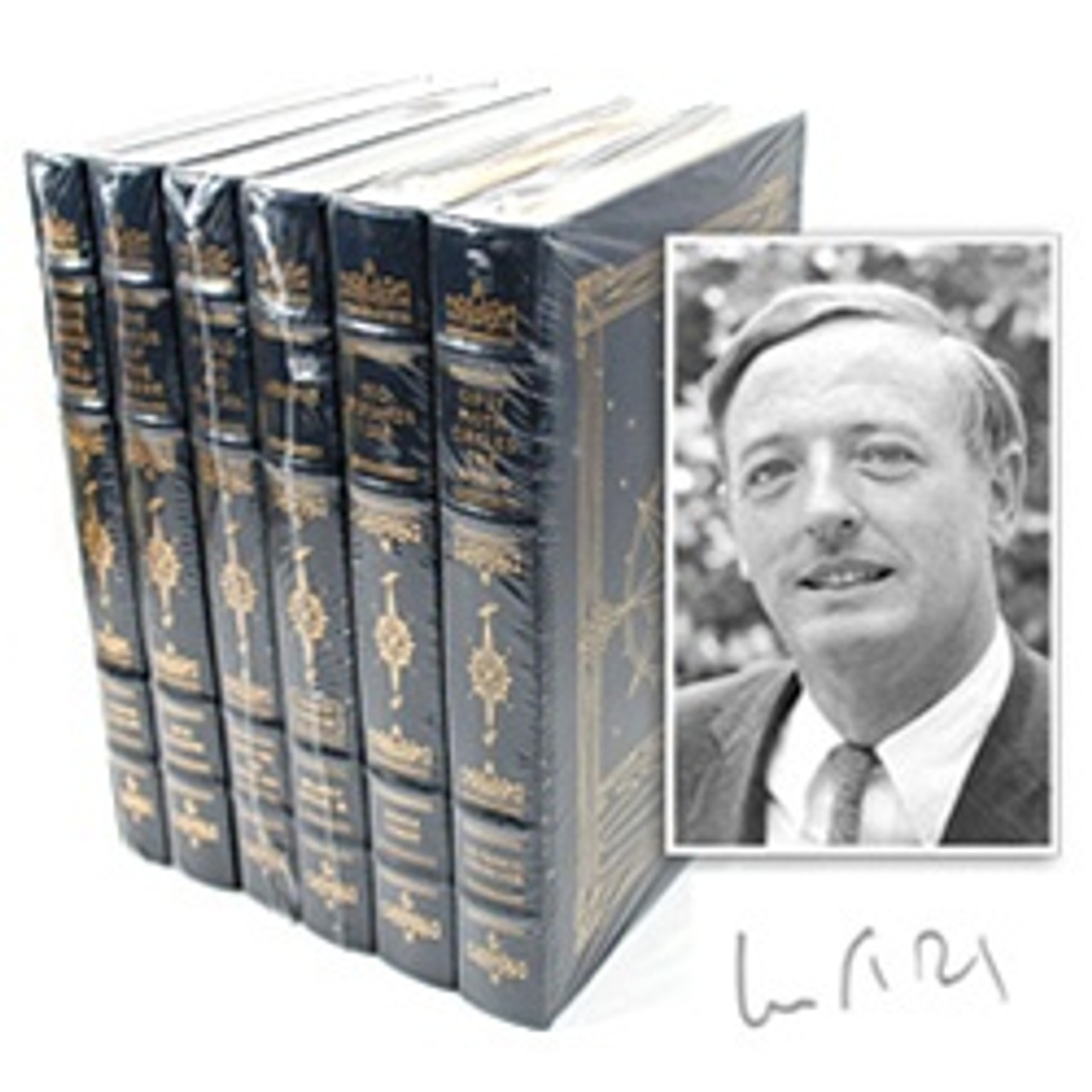 The Perfect Leather Bound Collector's Set for Anyone Who Enjoys Sailing

Condition
As New - All six volumes are sealed in the original shrink-wrap. Flawless. No bumped corners, etc.


Photo of the actual set.


William Frank Buckley, Jr. (November 24, 1925 � February 27, 2008) was an American conservative author and commentator. He founded the political magazine National Review in 1955, hosted 1,429 episodes of the television show Firing Line from 1966 until 1999, and was a nationally syndicated newspaper columnist. His writing style was famed for its erudition, wit, and use of uncommon words.

Buckley wrote first God and Man at Yale (1951); among over fifty further books on writing, speaking, history, politics and sailing, were a series of novels featuring CIA agent Blackford Oakes. Buckley referred to himself as either a libertarian or conservative. He resided in New York City and Stamford, Connecticut. He was a practicing Roman Catholic, regularly attending the traditional Latin Mass in Connecticut.

About "Sailing Alone Around the World"

Sailing Alone Around the World (1899) is a sailing memoir by Joshua Slocum about his single-handed global circumnavigation aboard the sloop Spray. Slocum was the first person to sail around the world alone. The book was an immediate success and highly influential in inspiring later travelers.

Captain Slocum, a highly experienced navigator and ship-owner, rebuilt and refitted the derelict sloop Spray in a seaside pasture at Fairhaven, Massachusetts during a thirteen-month period between early 1893 and 1894.

Between April 24, 1895 and June 27, 1898, Slocum, aboard the Spray, crossed the Atlantic twice (to Gibraltar and back to South America), negotiated the Strait of Magellan, and crossed the Pacific. He also visited Australia and South Africa before crossing the Atlantic (for the third time) to reach home after a journey of 46,000 miles.

Gipsy Moth IV is a 54 ft ketch that Sir Francis Chichester commissioned specifically to sail single-handed around the globe, racing against the times set by the clipper ships of the 19th century.

After being nursed back to health from a suspected lung abscess by his wife, Chichester became inspired while writing his book Along the Clipper Way, which charts the voyage taken by 19th century wool clippers returning from Australia. The clippers took an average of 123 days to make their passage, so Chichester set himself the target of making the passage in 100 days.

In 1962 Chichester commissioned Gosport-based ship yard Camper and Nicholsons to build the fourth boat in his series, all named Gipsy Moth. The name originated from the de Havilland Gipsy Moth aircraft in which Chichester completed pioneering work in aerial navigation techniques.

The maximum speed of a yacht is directly related to its wetted length: Gipsy Moth IV is 53 feet overall, whereas a clipper ship such as the Cutty Sark is 212 feet. Designed by John Illingworth and Angus Primrose, the boat incorporated the maximum amount of sail for the minimum amount of rigging, whilst employing tiller based self-steering using design principles established by Blondie Hasler that could enable steerage from the skipper's bunk, essential for solo sailing for a voyage of this length.

"David and Daniel Hays, father and son, designed and built a small boat together, then set out to sail it around the tip of South America, a journey that David had dreamed of ever since childhood. Along the way they fought and swore and sweated and shared triumphs large and small."

"In what would appear to landlubbers an awfully small boat, Daniel Hays and his father, David, sailed a total of 17,000 miles on a voyage that took them around Cape Horn, at the bottom of South America, the first Americans to do so in such a small vessel. Their joint retelling of their adventure is itself an adventure to read; they know how to rivet, engross, and practically transport us into their exploits. Enjoying sailing is definitely not a prerequisite for enjoying their sailing. A year after their voyage, David's wife, Daniel's mother, asked David who his ideal person was, his answer being, "My son." But such post-trip sentiment does not imply that father and son didn't have personal issues to iron out while they were so tightly fit on board enduring the physical strains placed on them by such an endeavor."

"One of the best books ever written about sailing--Lundy's knowledge of sea lore and history is rich, his pace perfect, his intelligence full of energy."--Time

"Eloquent--Lundy not only makes stirring narrative drama but also draws the lineaments of an archetypal hero, a human driven by fear, addicted to adrenaline, in need of the edge."--Christopher Lehmann-Haupt, The New York Times

"Godforsaken Sea goes beyond the events at hand to explore our fascination with the sea, and, as [Lundy] quotes Melville, 'the tiger that pants beneath it.'"--Outside

"Crisp and taut--. Should not be missed--[by sailors or] by readers who love the thrill of going on a bone-chilling adventure without leaving home."--Times-Union (Jacksonville)

"Brilliantly captures the objective, and at times monumental dangers facing sailors who compete in these grueling events, far from any kind of rescue."--Sailing -- Review

About "The Cruise of the Snark" Jack London

"Dudes! Jack London was a surfer! Inspired by Slocum's "Sailing Around the World Alone," London built a 45' schooner called the Snark, with the intent of sailing the world with his wife and crew. His first stop was Hawaii, where he learned to surf in 1907. He then went on to the South Seas and the Solomon Islands. This book is always insightful, and often hilarious."