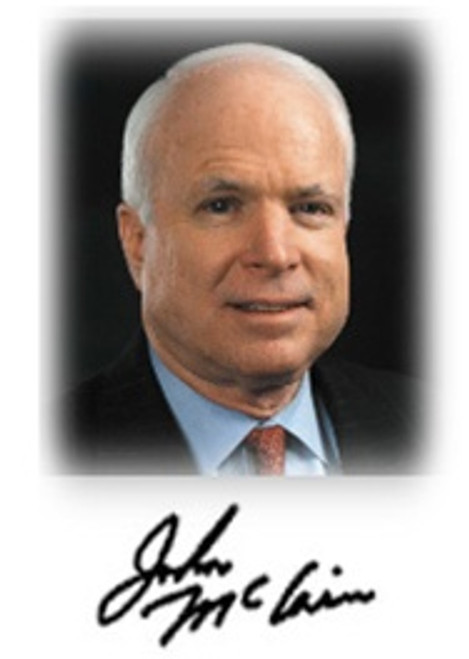 A 3 volume Easton Press collection from John McCain. This distinguished set includes John McCain's three inspiring memoirs, "Faith of My Fathers", "Worth the Fighting For", and "Why Courage Matters". They cover McCain's capture and imprisonment during the Vietnam War, his electrifying run for the Republican Presidential nomination in 2000, and his meditations on the nature and importance of courage in today's world. "Why Courage Matters" has been personally signed by Senator John McCain.

After two stirring memoirs, Senator McCain turns in a slim meditation on the nature of courage. Suggesting the definition of courage has been stretched thin in contemporary parlance, where it can be applied to acts as insignificant as cutting or not cutting one's hair, McCain seeks to return to the word's fundamental meaning not just of "the capacity for action despite our fears" but self-sacrifice for the benefit of others as well as for oneself. Although he addresses valorous conduct by American soldiers in the Korean and Vietnam Wars, he is, as always, modestly self-critical of his own experiences in Vietnam (although he and his fellow POWs turned to one another for moral support on a daily basis, he confesses, "I was not always a match for my enemies"). In an especially moving chapter, he recounts the participation of his congressional colleague John Lewis in the nonviolent wing of the Civil Rights movement. Other sections discuss the Navajo leaders Manuelito and Barboncito, Jewish freedom fighter Hannah Senesh and Burmese dissident (and Nobel Peace Prize recipient) Aung San Suu Kyi. These compelling life stories stand up against the best passages of McCain's previous works. Alas, his writing becomes more vague and less interesting when he shifts to a more abstract discussion of the need for courage in the post September 11 era. One of McCain's greatest strengths as a writer has been that he doesn't sound like just another politician, and while the drop-off in quality here isn't significant, it is noticeable.

"Faith of My Fathers"

Books by politicians are not often worth reading, but John McCain's Faith of My Fathers is an astonishing exception to the rule. The Republican senator from Arizona has a remarkable story to tell--better than just about any of his peers--and he tells it well, with crisp prose and an unexpected sense for narrative pacing. The first half of the book concerns his naval forbears: his grandfather commanded an aircraft carrier in the Second World War, while his father presided over all naval forces in the Pacific during the Vietnam War. They were the first father-son admirals in American history. Young John McCain knew he had enormous shoes to fill and rebelled against many of the expectations set for him. At the Naval Academy, he was nearly expelled, graduating fifth from the bottom of his class. He never became an admiral, but achieved fame another way: as a naval aviator in 1967, he was shot down over North Vietnam and spent several years in POW camps, where he was beaten, tortured, and nearly allowed to die. McCain describes the awful details of his imprisonment and tells how he stayed mentally strong during seemingly endless months of solitary confinement and how he communicated in code with fellow captives. Faith of My Fathers concludes with McCain's release and contains no information about his subsequent political career. It is, nonetheless, a complete and compelling memoir of individual heroism--one that will interest both political and military history buffs.

"Worth the Fighting For"

McCain, with help from his administrative assistant Salter, picks up where the bestselling Faith of My Fathers left off, after his release from a North Vietnamese POW prison. After two decades in Congress, he has plenty of stories to tell, beginning with his first experiences on Capitol Hill as a navy liaison to the Senate, where he became friends with men like Henry "Scoop" Jackson and John Tower. (The latter friendship plays a crucial role in McCain's account of the battle over Tower's 1989 nomination for defense secretary.) He revisits the "Keating Five" affair that nearly wrecked his career in the early '90s, pointedly observing how the investigating Senate committee left him dangling for political reasons long after he'd been cleared of wrongdoing. There's much less on his 2000 presidential campaign than one might expect; a single chapter lingers on a self-lacerating analysis of how he lost the South Carolina primary. (He admits, "I doubt I shall have reason or opportunity to try again" for the White House, and may even consider retiring from the Senate.) Self-criticism is a recurring motif, as the senator berates himself for speaking recklessly or letting his temper get the best of him. He nevertheless takes pride in his status as a maverick and pays tribute to inspirational figures like Theodore Roosevelt, Ted Williams and Robert Jordan, the fictional protagonist of Hemingway's For Whom the Bell Tolls. Luckily for McCain, he's such an engaging storyteller most readers will readily accept these digressions from his own remarkable history.

A Special Treat for "The Hardy Boys" Fans in This Superior CollectionLimited Edition. Collector's Edition. A luxurious complete set of The Hardy Boys. This is the original 12 volume leather bound...