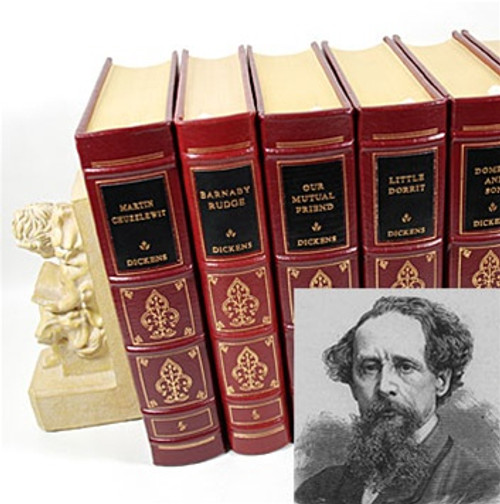 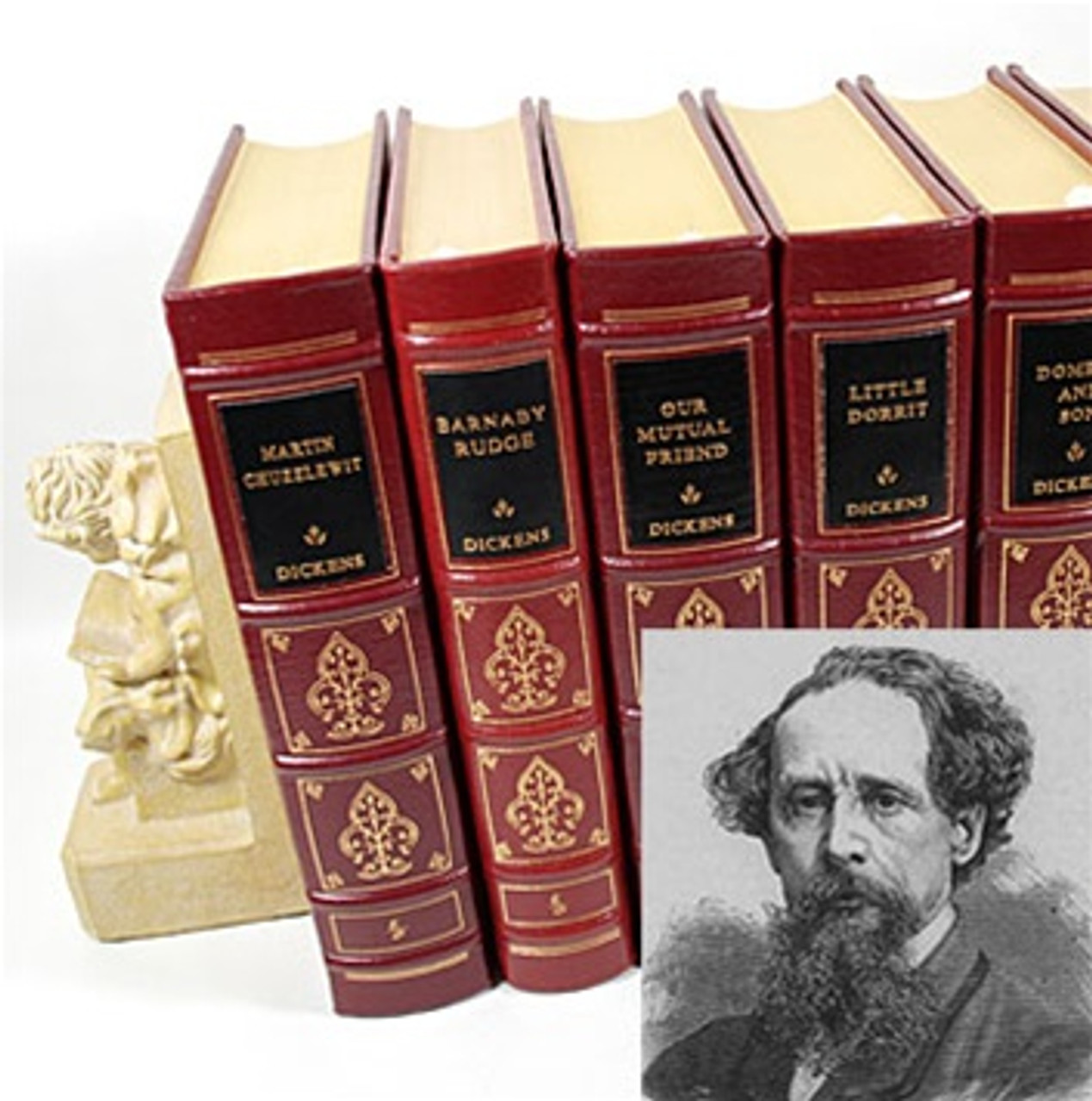 Charles John Huffam Dickens, FRSA (7 February 18129 June 1870), pen-name "Boz", was the most popular English novelist of the Victorian era, and one of the most popular of all time. He created some of English literature's most memorable characters, with the theme of social reform running throughout his work. The continuing popularity of his novels and short stories is such that they have never gone out of print.


Condition
All volumes in Fine condition. Wonderful bright clean copies. Free of markings, writings, or stamps. No attached bookplates or indication of any removed. The bindings are tight, pages inside are bright and crisp.

Included in this collection:

About Charles Dickens
Many of the novels first appeared in periodicals and magazines in serialised form, a popular format for fiction at the time. Unlike other authors who completed entire novels before serial production began, Dickens often composed his works in parts, in the order in which they were meant to appear. The practice lent his stories a particular rhythm, punctuated by one minor "cliffhanger" after another, to keep the public looking forward to the next instalment.

His work has been praised for its mastery of prose, and its unique, even iconic, personalities, by writers such as George Gissing and G. K. Chesterton, though the same characteristics prompted others, such as Henry James and Virginia Woolf, to criticise him for sentimentality and implausibility.

A well-known personality, his novels proved immensely popular during his lifetime. His first full novel, The Pickwick Papers (1837), brought him immediate fame, and this success continued throughout his career. Although rarely departing greatly from his typical "Dickensian" method of always attempting to write a great "story" in a somewhat conventional manner (the dual narrators of Bleak House constitute a notable exception), he experimented with varied themes, characterisations, and genres. Some of these experiments achieved more popularity than others, and the public's taste and appreciation of his many works have varied over time. Usually keen to give his readers what they wanted, the monthly or weekly publication of his works in episodes meant that the books could change as the story proceeded at the whim of the public. Good examples of this are the American episodes in Martin Chuzzlewit which Dickens included in response to lower-than-normal sales of the earlier chapters. In Our Mutual Friend, the inclusion of the character of Riah was a positive portrayal of a Jewish character after he was criticized for the depiction of Fagin in Oliver Twist.

Although his popularity has waned a little since his death, he continues to be one of the best known and most read of English authors. At least 180 motion pictures and TV adaptations based on Dickens's works help confirm his success. Many of his works were adapted for the stage during his own lifetime and as early as 1913 a silent film of The Pickwick Papers was made. His characters were often so memorable that they took on a life of their own outside his books. Gamp became a slang expression for an umbrella from the character Mrs Gamp and Pickwickian, Pecksniffian, and Gradgrind all entered dictionaries due to Dickens's original portraits of such characters who were quixotic, hypocritical, or emotionlessly logical. Sam Weller, the carefree and irreverent valet of The Pickwick Papers, was an early superstar, perhaps better known than his author at first. It is likely that A Christmas Carol stands as his best-known story, with new adaptations almost every year. It is also the most-filmed of Dickens' stories, with many versions dating from the early years of cinema. This simple morality tale with both pathos and its theme of redemption, sums up (for many) the true meaning of Christmas. Indeed, it eclipses all other Yuletide stories in not only popularity, but in adding archetypal figures (Scrooge, Tiny Tim, the Christmas ghosts) to the Western cultural consciousness. A Christmas Carol was written by Dickens in an attempt to forestall financial disaster as a result of flagging sales of his novel Martin Chuzzlewit. Years later, Dickens shared that he was "deeply affected" in writing A Christmas Carol and the novel rejuvenated his career as a renowned author.

At a time when Britain was the major economic and political power of the world, Dickens highlighted the life of the forgotten poor and disadvantaged at the heart of empire. Through his journalism he campaigned on specific issuessuch as sanitation and the workhousebut his fiction probably demonstrated its greatest prowess in changing public opinion in regard to class inequalities. He often depicted the exploitation and repression of the poor and condemned the public officials and institutions that not only allowed such abuses to exist, but flourished as a result. His most strident indictment of this condition is in Hard Times (1854), Dickens's only novel-length treatment of the industrial working class. In this work, he uses both vitriol and satire to illustrate how this marginalised social stratum was termed "Hands" by the factory owners; that is, not really "people" but rather only appendages of the machines that they operated. His writings inspired others, in particular journalists and political figures, to address such problems of class oppression. For example, the prison scenes in The Pickwick Papers are claimed to have been influential in having the Fleet Prison shut down. As Karl Marx said, Dickens, and the other novelists of Victorian England, "...issued to the world more political and social truths than have been uttered by all the professional politicians, publicists and moralists put together...". The exceptional popularity of his novels, even those with socially oppositional themes (Bleak House, 1853; Little Dorrit, 1857; Our Mutual Friend, 1865) underscored not only his almost preternatural ability to create compelling storylines and unforgettable characters, but also ensured that the Victorian public confronted issues of social justice that had commonly been ignored.

His fiction, with often vivid descriptions of life in nineteenth century England, has inaccurately and anachronistically come to symbolise on a global level Victorian society (1837  1901) as uniformly "Dickensian," when in fact, his novels' time span spanned from the 1770s to the 1860s. In the decade following his death in 1870, a more intense degree of socially and philosophically pessimistic perspectives invested British fiction; such themes stood in marked contrast to the religious faith that ultimately held together even the bleakest of Dickens's novels. Dickens clearly influenced later Victorian novelists such as Thomas Hardy and George Gissing, however their works display a greater willingness to confront and challenge the Victorian institution of religion. They also portray characters caught up by social forces (primarily via lower-class conditions), but they usually steered them to tragic ends beyond their control.

Novelists continue to be influenced by his books; for instance, such disparate current writers as Anne Rice, Tom Wolfe, and John Irving evidence direct Dickensian connections. Humorist James Finn Garner even wrote a tongue-in-cheek "politically correct" version of A Christmas Carol, and other affectionate parodies include the Radio 4 comedy Bleak Expectations. Matthew Pearl's novel The Last Dickens is a thriller about how Charles Dickens would have ended Edwin Drood.