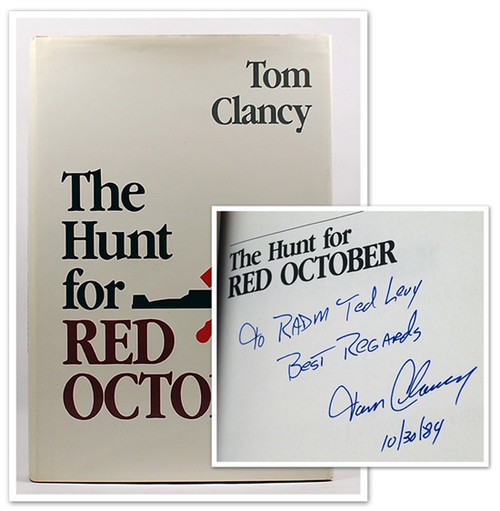 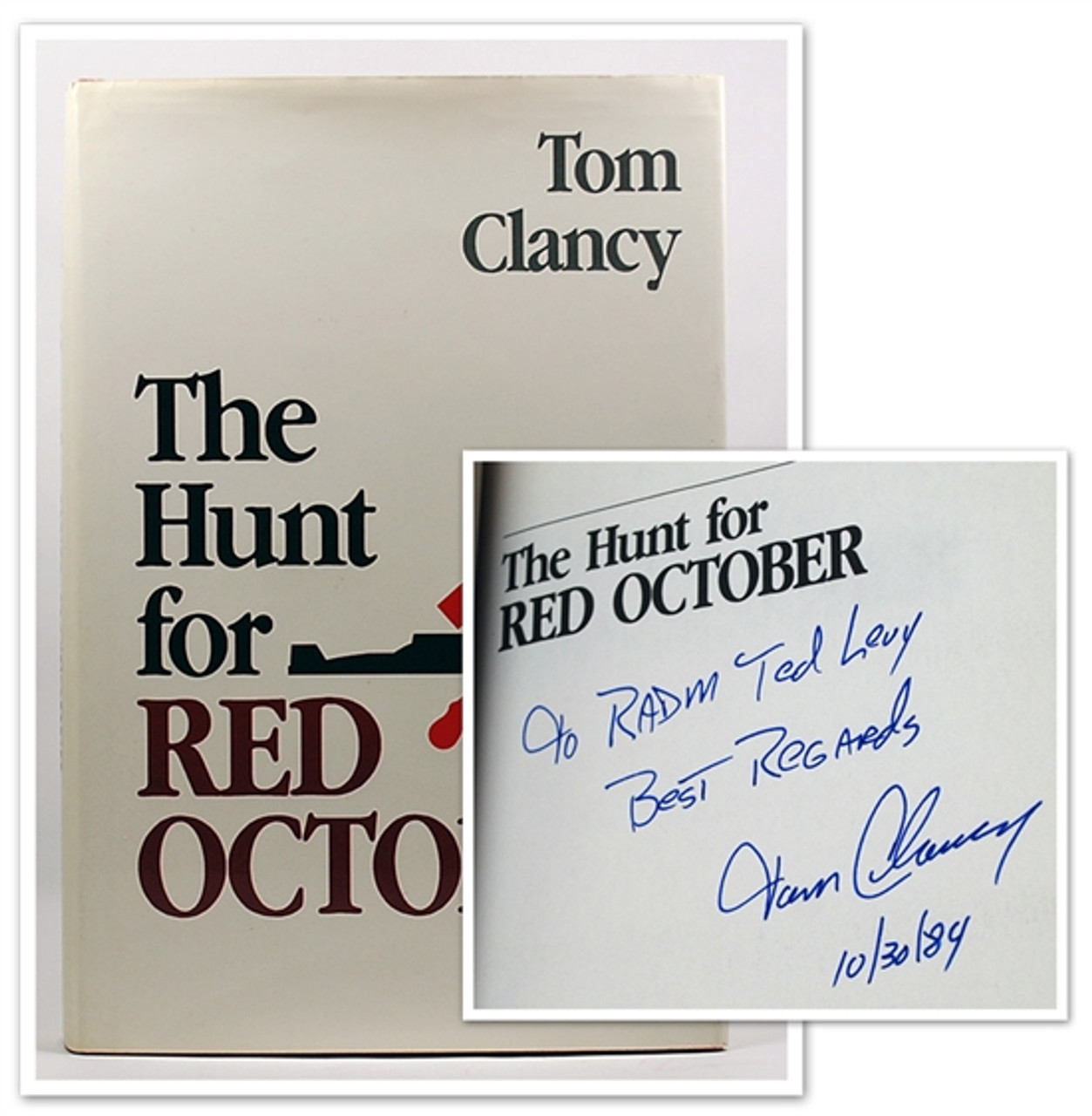 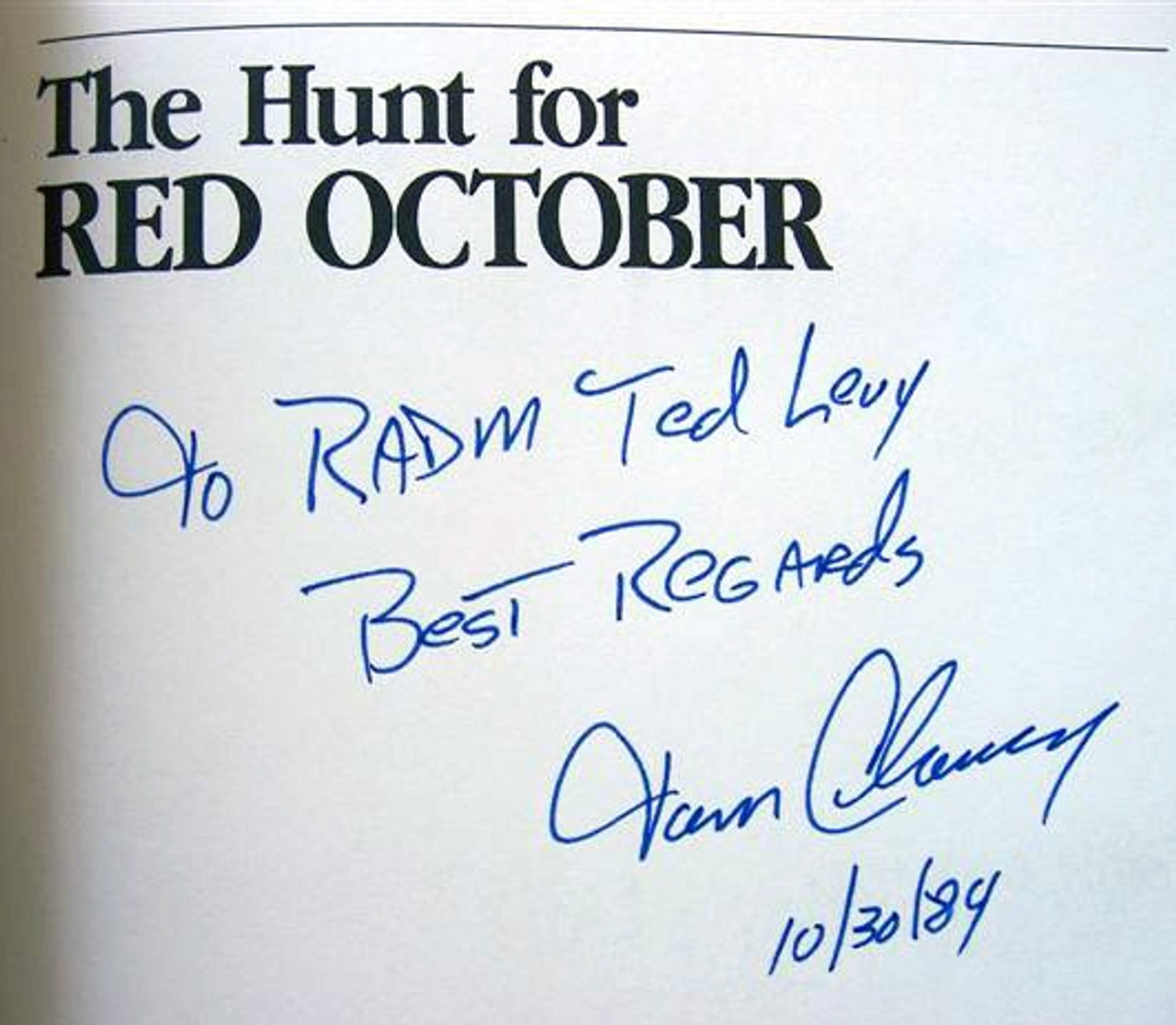 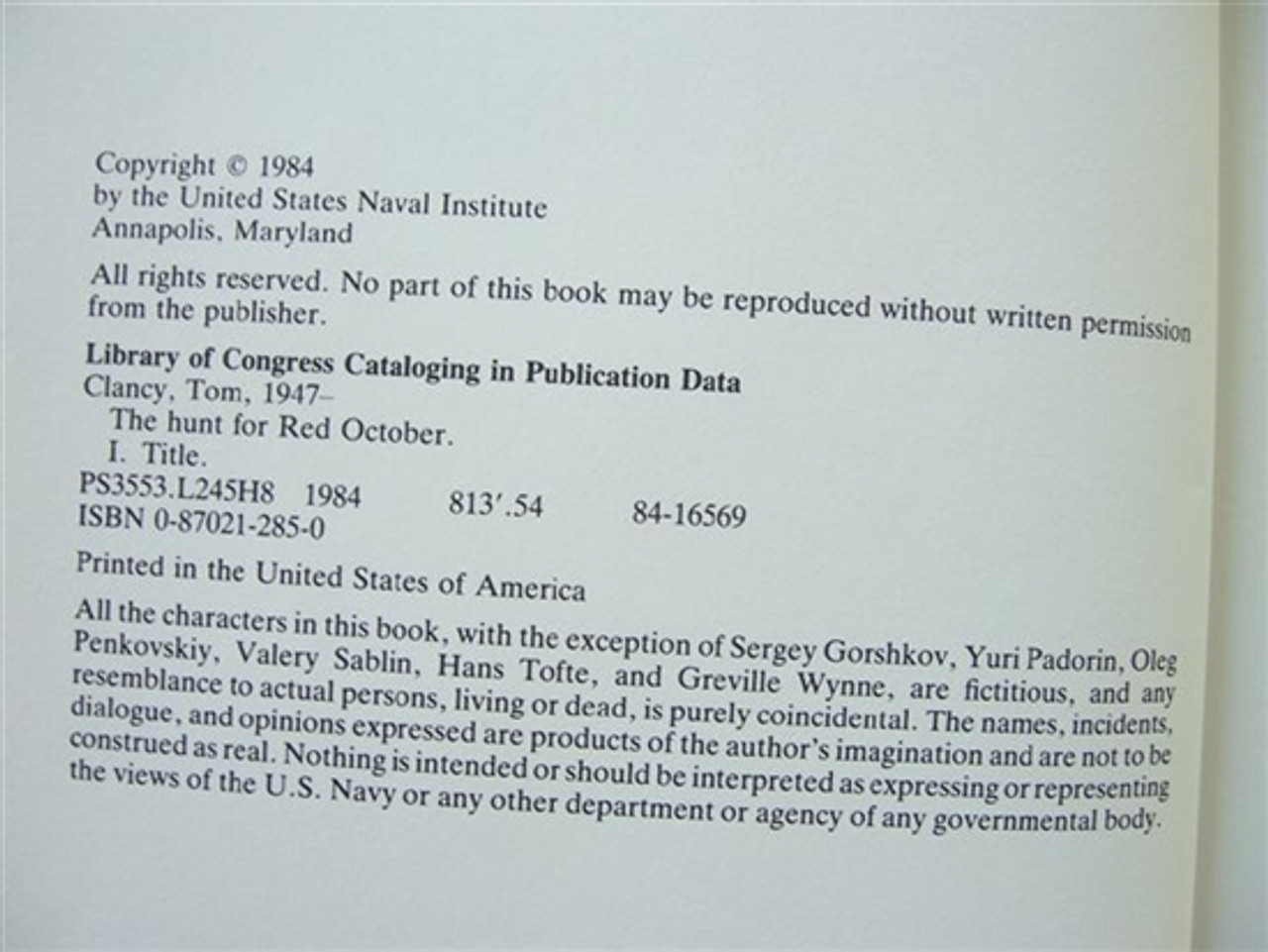 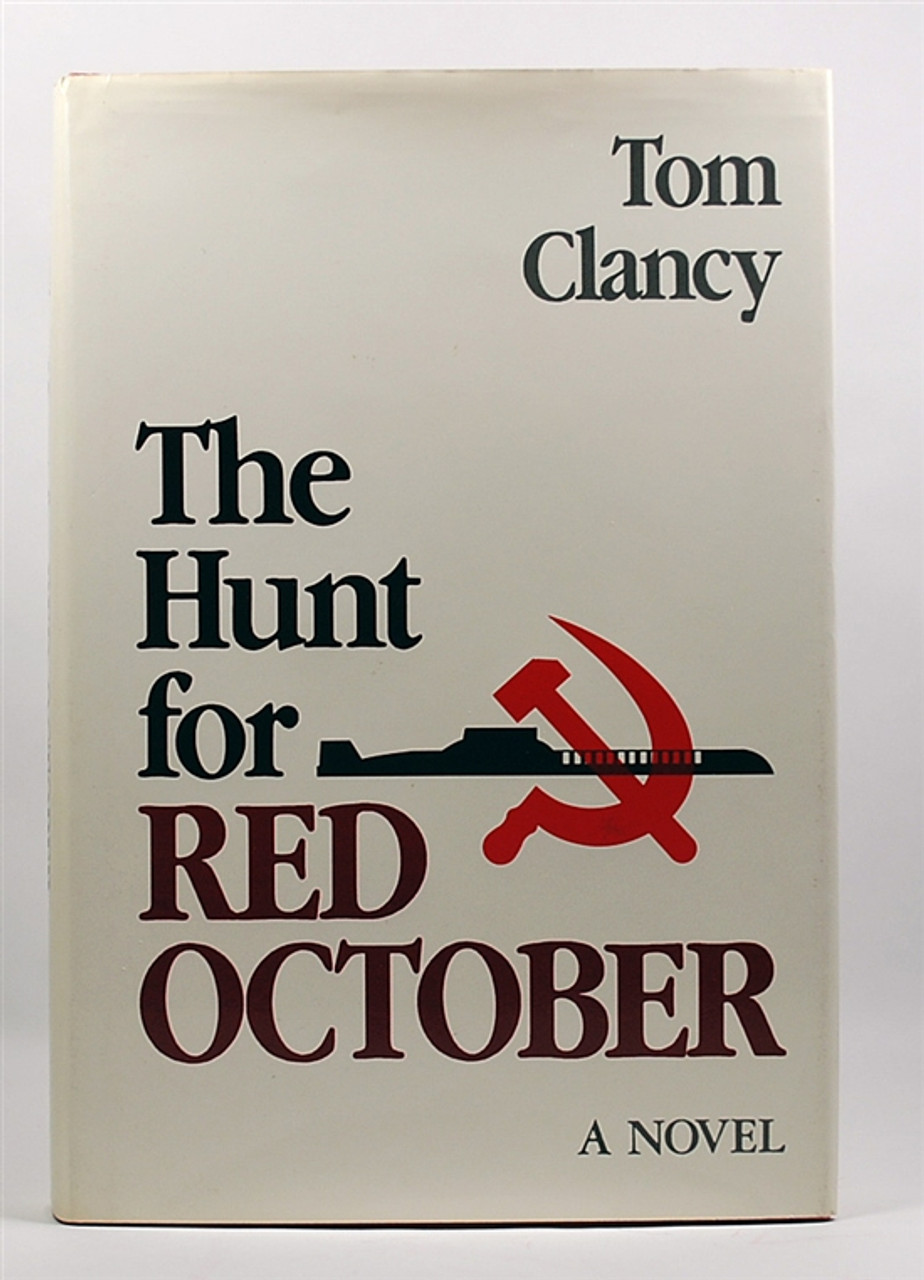 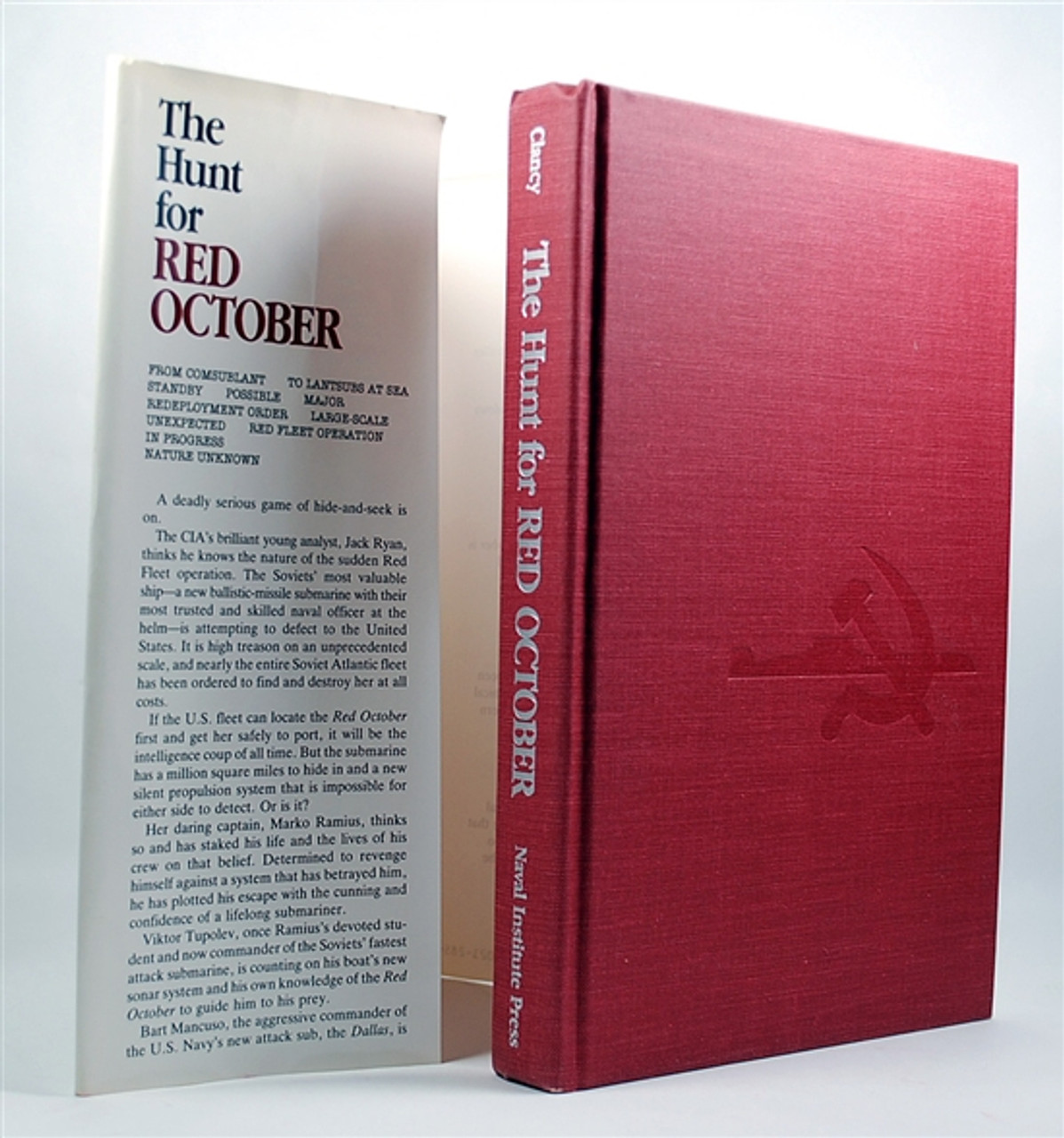 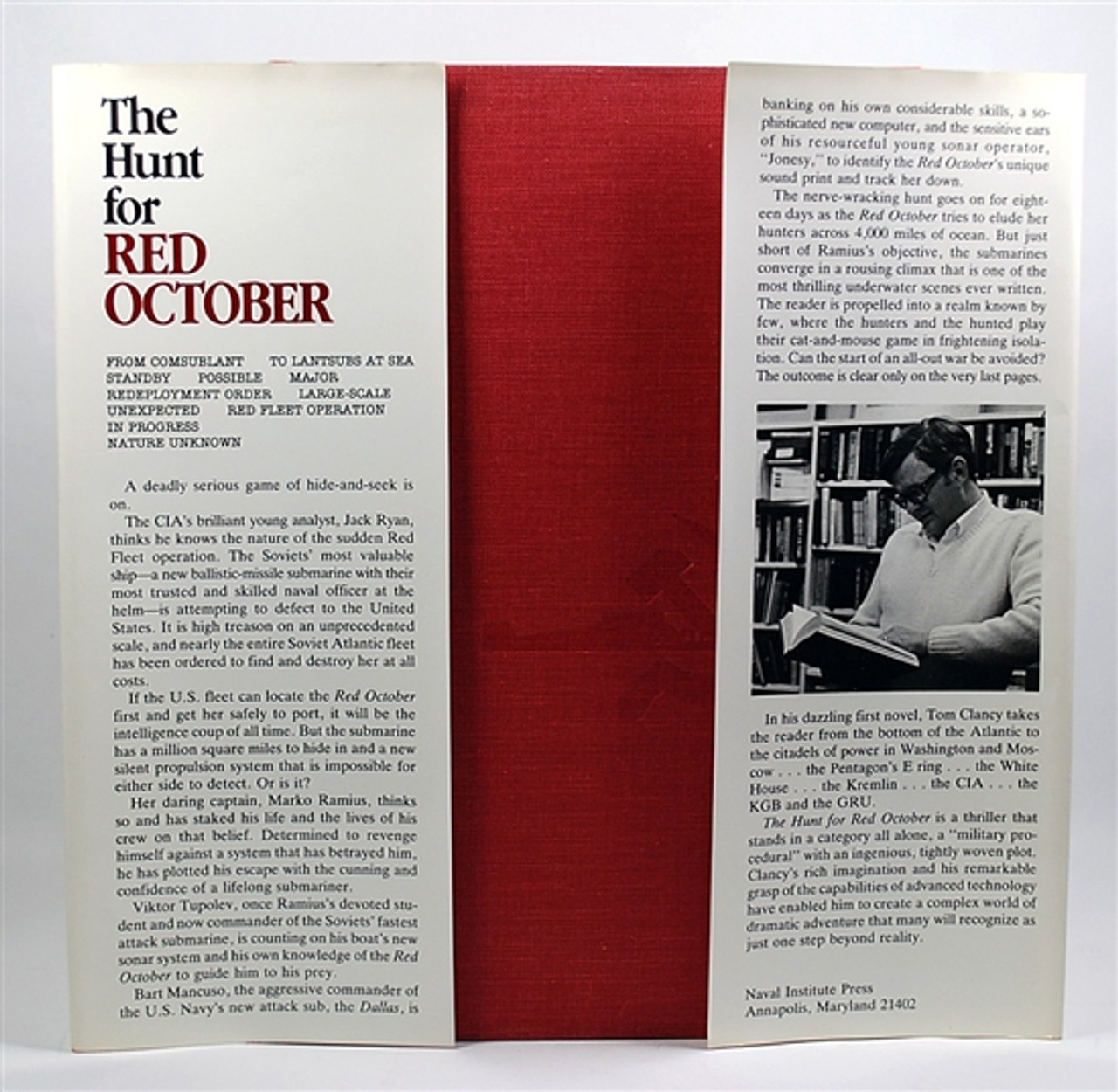 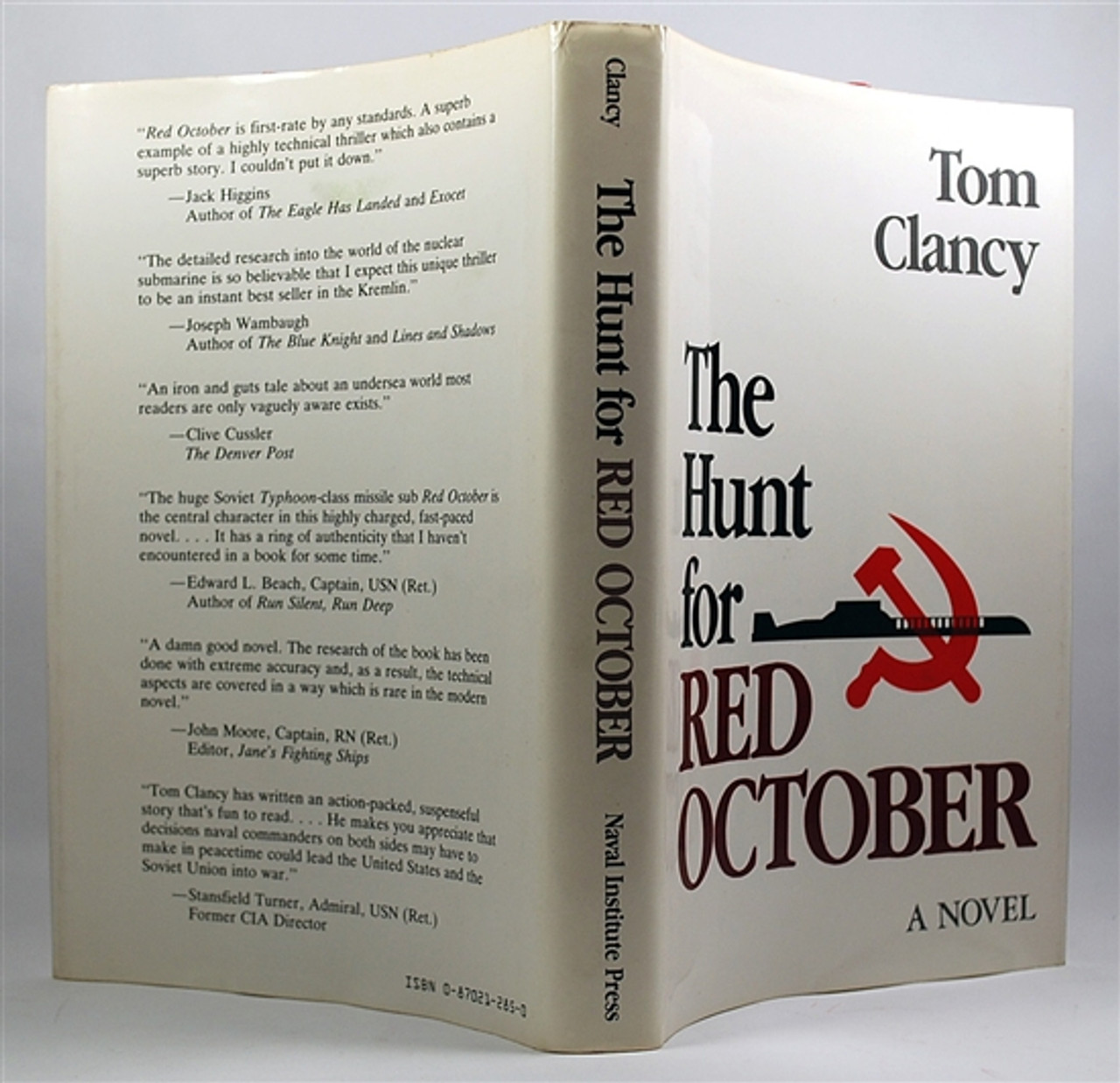 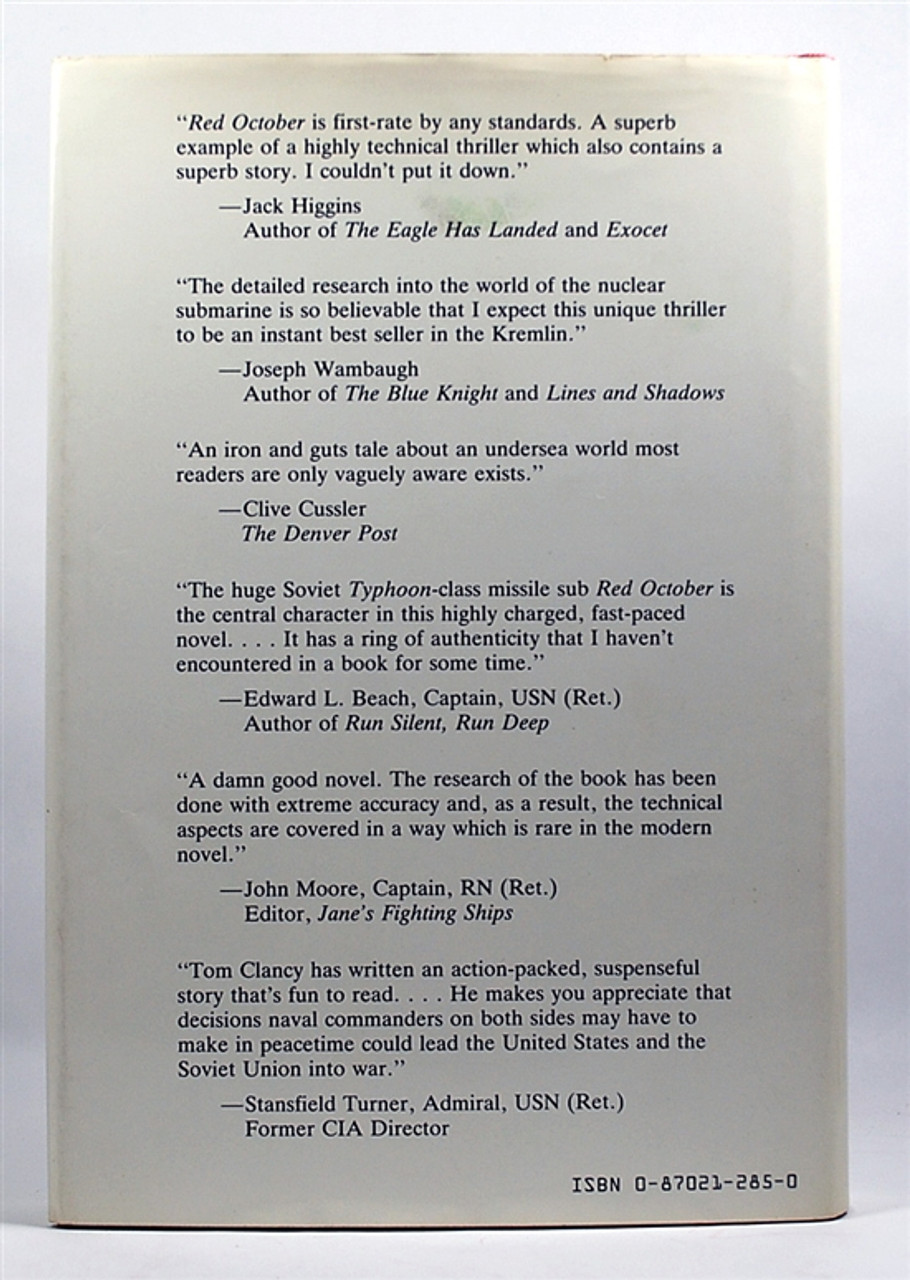 An original First Edition, First Printing, hand signed and dated by Tom Clancy with a personal inscription to Rear Admiral Ted Levy, A Veteran of the Korean War. Signed on the date of publication:
"To RADM Ted Levy
Best Regards,
Tom Clancy
10/30/84"

Somewhere under the Atlantic, a Soviet sub commander has just made a fateful decision: the Red October is heading west. The Americans want her. The Russians want her back. And the most incredible chase in history is on....

The Hunt for Red October is the runaway bestseller that launched Tom Clancy's phenomenal career. A military thriller so accurate and convincing that the author was rumored to have been debriefed by the White House. Its theme: the greatest espionage coup in history. Its story: the chase for a runaway top secret Russian missile sub.

This copy is one of only 5000 First Printings with all the correct points of issue:

Condition: Very Nearly Fine. Clean and straight boards, free or makings, writings, or stamps. The binding is uniform and tight. A crisp, bright, wonderful copy. This book stands out as having had excellent care. Protected in a brand new Mylar covering. Slight rubbing to bottom end of front hardcover. No rips, tears or creases to dust-jacket. Free of bookplates. An exceptional collector's grade hardcover book for your signed first edition collection.

Levy was born on June 15, 1930. His parents were Gladys (Loring) and Abram Levy. He received a Bachelor of Science degree and a Master of Science degree from the Georgia Institute of Technology in Architecture and Civil Engineering. He was commissioned in the United States Navy in 1952, through the Holloway Plan when he went to Gerogia Tech.

In the Korean War, Levy served aboard the USS Samuel B. Roberts (DD-823) as a qualified Surface Warfare Officer. He went for flight training and when he was finished, Levy became a Patrol Plane Commander and Avionic Officer with Patrol Squadron 18.

As Rear Admiral Ted Levy went up the ladder in promotions, he undertook many assignments: He became the Commanding Officer of the Naval Air Reserve Staff B1, Naval Air Station 608 and Volunteer Training Unit 6767; He was on many promotion and major selections Boards; He was the director on the U.S. Naval Institute Board of Control and Editorial Board; He served as Chairman of the Secretary of the Navys National Naval Reserve Policy Board.

In his private life, he was an architect and the leader of his firm Ted Levy, AIA, Architect. He lives in Atlanta with his wife Renata, and his daughter, Kim and his two sons, Bret and Keith.

The novel was originally published by the U.S. Naval Institute Pressï¿½the first fictional work they ever published and still their most successful.

"The Hunt for Red October is Tom Clancy's superb, exciting story, only made better by the reading of Richard Crenna...Even if you have read the book and seen the movie, this cassette with Crenna's voice will give you two hours and 41 minutes of thrills...Don't miss this listening pleasure!" -- The News Chief

The Hunt for Red October was the start of a loosely connected series by Tom Clancy which shared a rough continuity and many of the characters in the novel. Jack Ryan in particular went on to be the central character of many of Clancy's later novels, though some of Clancy's novels were explicitly unrelated (such as Red Storm Rising).

The ultimate fate of the Red October is explained in the Clancy novel The Cardinal of the Kremlin, where it is revealed that the vessel was reverse engineered and stripped of all technology. The Red October was then sunk in a deep ocean trench to avoid discovery.

The novel was made into a commercially-successful movie in 1990, starring:

There were several differences between the novel and the film, including the Red October traveling up the Chesapeake Bay and near Tom Clancy's Calvert County home on the water and the prominence of the Royal Navy, including the HMS Invincible. The order of many events also has been changed.