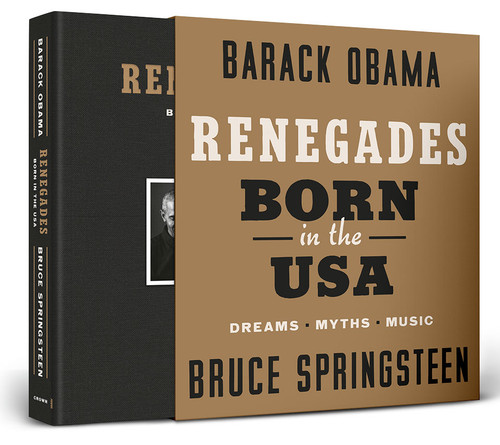 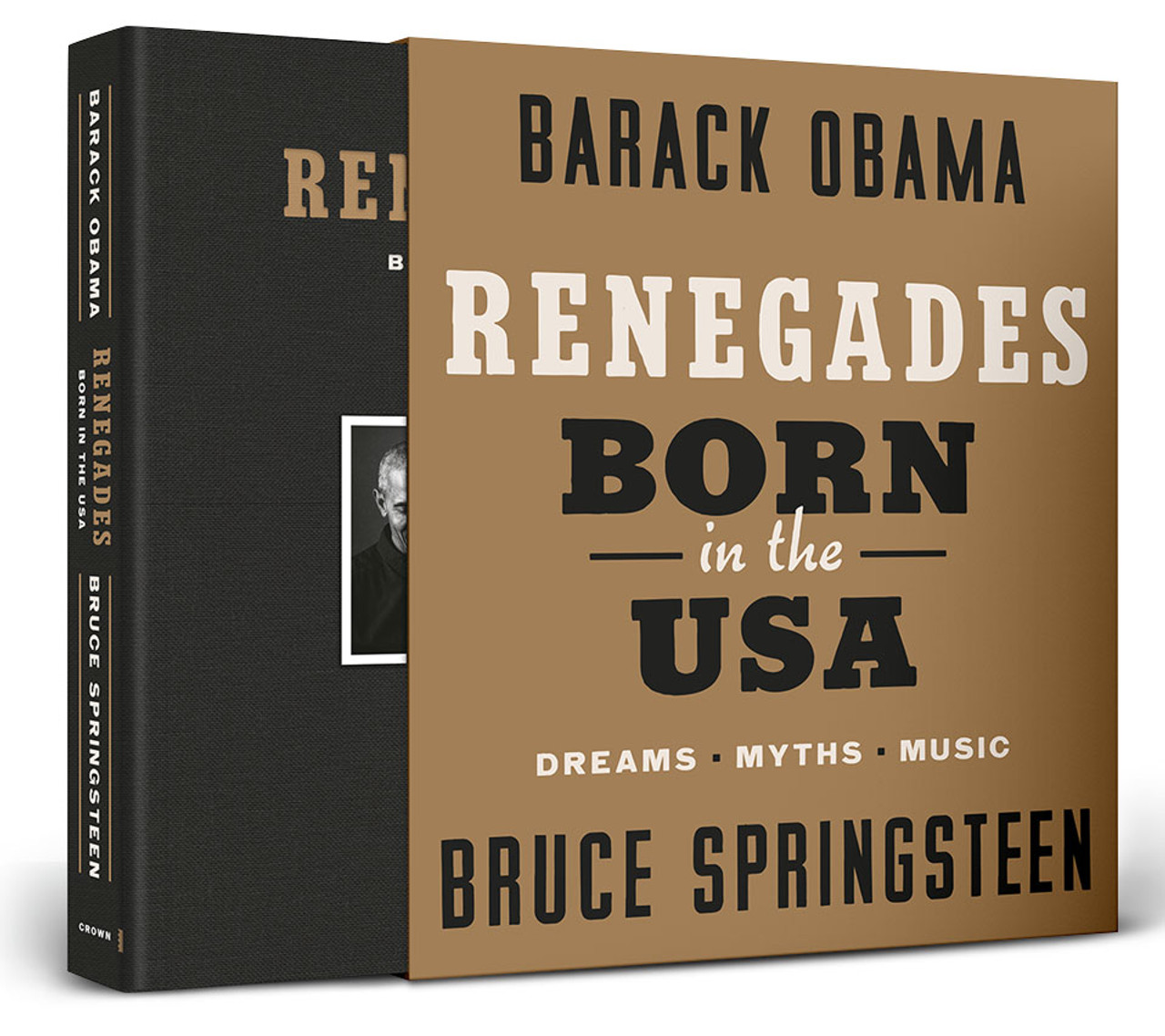 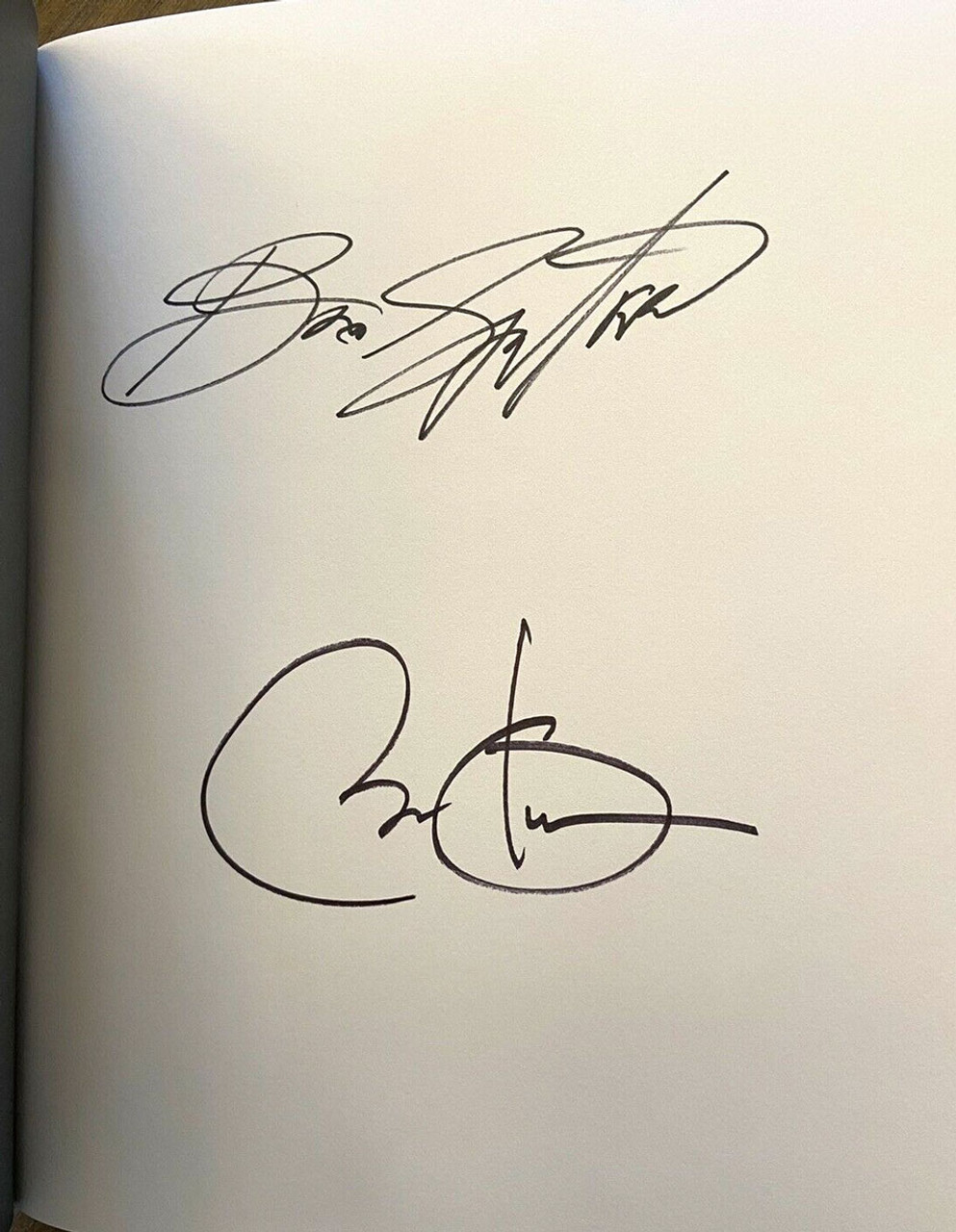 A significant signed deluxe edition because it is signed by both a former U.S. President along with the most honored American rock star of all time. This edition would make an exceptional gift idea for the holidays - includes the option of free gift wrapping along with a personalized note for the recipient.

A great opportunity to be one of the first collectors in the world to own this very special book!

DELUXE CLOTHBOUND EDITION IN SLIPCASE, SIGNED BY BOTH AUTHORS

Two longtime friends share an intimate and urgent conversation about life, music, and their enduring love of America, with all its challenges and contradictions, in this stunningly produced expansion of their groundbreaking Higher Ground podcast, featuring all the incredible photographs, bonus content, and archival material of the original edition.

Renegades: Born in the USA is a candid, revealing, and entertaining dialogue between President Barack Obama and legendary musician Bruce Springsteen that explores everything from their origin stories and career-defining moments to our country’s polarized politics and the growing distance between the American Dream and the American reality. Filled with full-color photographs and rare archival material, it is a compelling and beautifully illustrated portrait of two outsiders—one Black and one white—looking for a way to connect their unconventional searches for meaning, identity, and community with the American story itself.

"Renegades: Born in the USA" includes:

In a recording studio stocked with dozens of guitars, and on at least one Corvette ride, Obama and Springsteen discuss marriage and fatherhood, race and masculinity, the lure of the open road and the call back to home. They also compare notes on their favorite protest songs, the most inspiring American heroes of all time, and more. Along the way, they reveal their passion for—and the occasional toll of—telling a bigger, truer story about America throughout their careers, and explore how our fractured country might begin to find its way back toward unity and global leadership.

Barack Hussein Obama (born August 4, 1961) is an American politician, author, and retired attorney who served as the 44th president of the United States from 2009 to 2017. A member of the Democratic Party, Obama was the first African-American president of the United States. He previously served as a U.S. senator from Illinois from 2005 to 2008 and as an Illinois state senator from 1997 to 2004. Outside of politics, Obama has published three bestselling books; Dreams from My Father (1995), The Audacity of Hope (2006) and A Promised Land (2020).

Obama was born in Honolulu, Hawaii. After graduating from Columbia University in 1983, he worked as a community organizer in Chicago. In 1988, he enrolled in Harvard Law School, where he was the first black president of the Harvard Law Review. After graduating, he became a civil rights attorney and an academic, teaching constitutional law at the University of Chicago Law School from 1992 to 2004. Turning to elective politics, he represented the 13th district in the Illinois Senate from 1997 until 2004, when he ran for the U.S. Senate. Obama received national attention in 2004 with his March Senate primary win, his well-received July Democratic National Convention keynote address, and his landslide November election to the Senate. In 2008, a year after beginning his campaign, and after a close primary campaign against Hillary Clinton, he was nominated by the Democratic Party for president. Obama was elected over Republican nominee John McCain in the general election and was inaugurated alongside his running mate, Joe Biden, on January 20, 2009. Nine months later, he was named the 2009 Nobel Peace Prize laureate.

Bruce Frederick Joseph Springsteen (born September 23, 1949) is an American singer, songwriter, and musician. He has released twenty studio albums, many of which feature his backing band, the E Street Band. Originally from the Jersey Shore, he is one of the originators of the heartland rock style of music, combining mainstream rock musical style with narrative songs about working class American life. During a career that has spanned five decades, Springsteen has become known for his poetic, socially conscious lyrics and energetic stage performances, sometimes lasting up to four hours in length. He has been nicknamed "the Boss".

The former president and the singer-songwriter, longtime friends, have shared their stories in a podcast, and now a book: "Renegades: Born in the USA." Barack Obama and Bruce Springsteen sit down with correspondent Anthony Mason to discuss the influence of their fathers on their life's work, and the shared narratives that drive the surprisingly similar fields of popular music and politics.

“Renegades: Born in the USA is human, vulnerable, smart, and passionate. . . . Obama and Springsteen admire their country while considering its shortcomings and still come out the other side with a sense of patriotism and hope that spills over the bounds of a book.”—Associated Press

“A collection of intimate and thoughtful conversations between the president and the Boss.”—Los Angeles Times

“Do you dream of scoring an invitation to Springsteen’s Colts Neck compound? Maybe strumming on those guitars, riding horses, riffing on the American experiment in the recording studio? Unless you’re an American president, you’re going to have to get in line. But in between daydreams, pick up Renegades. It’s the closest thing to being a fly on the wall of an incredible friendship.”—Esquire

“A candid, revealing, and entertaining dialogue . . . poignant and honest, with a dash of good humor.”—The Aquarian 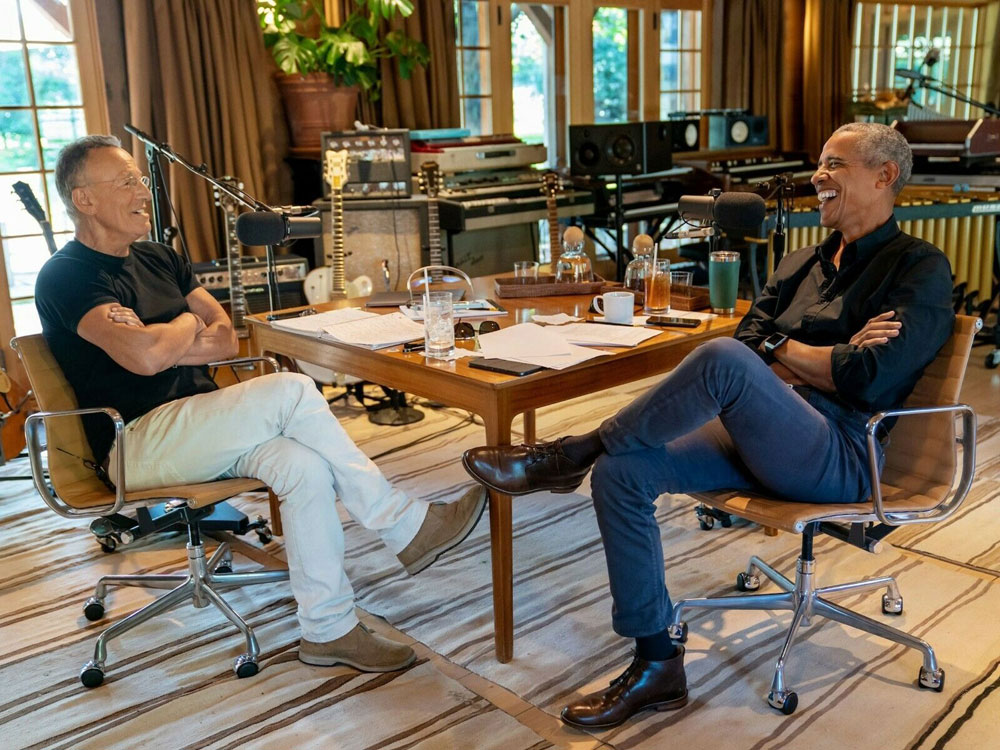 VERY FINE GUARANTEED. SEALED. Very Fine without any flaws. As New. A wonderful bring clean copy without any other marks, writings , or stamps. Clean & straight boards. No attached bookplates or indication of any removed. A well-cared for book, protected from any potential damage. Unread with square and tight spine.