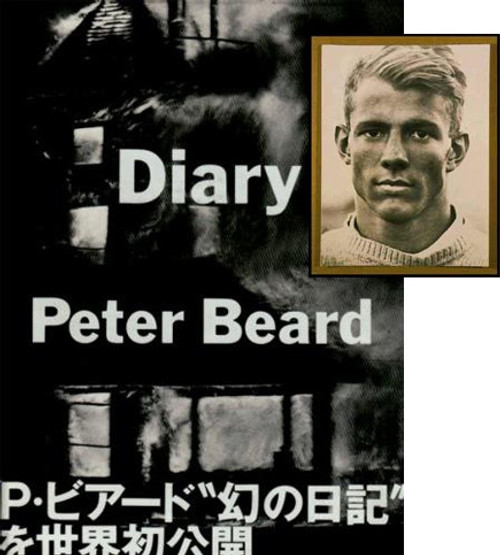 Peter Beard "DIARY: From a Dead Man's Wallet: Confessions of a Bookmaker" Libro Port, Tokyo 1993. First Edition. First Impression. A rare over-sized edition that is now OUT OF PRINT and hard to find.

A must have title for the serious collector of art and photography. 4to. Original white boards with titles to spine in black and with the dust jacket. The book appears to be unread.

An over-sized edition, profusely illustrated with color and black/white photographs. Text in Japanese. Designed by Tsuguya Inoue. The book includes a biography. Published only in Japan in conjunction with a 1993 exhibition.

The volume documents Peter Beard's obsessively collage-ed diaries - many of which were consumed in the fire pictured on the dust jacket that destroyed photographer's Montauk estate. A most handsome copy of this uncommon item in the publisher's original dust jacket as issued. A scarce title.

About the Art of Peter Beard

Beard channels most of his creative energy into his collage-work and diaries, which he began to compile in 1949 at the age of eleven. Peter Beard began keeping diaries as a child and after discovering a love of photography, used photographs to extend and enhance them. Beard read Karen Blixen's Out of Africa, which inspired him to travel to Africa in 1955. He took many pictures of the wildlife there and began putting them into collages and using animal blood and remains along with clippings to create his work.

In these works, he documents the history of his relationships with (among other things): Africa, Karen Blixen, the New York art scene, the fashion world, Hollywood, and the Kennedy administration. Page after page is covered with photographs of women, transcribed telephone messages, marginalia in India ink, clippings from the daily newspapers, dried leaves and insects, old sepia-toned photographs, drawings of animals and people by Kikuyu artists, quotes by Joseph Conrad, found objects, images of decaying elephant carcasses, and sometimes, Beard�s own blood.

Beard attended Yale University where he enrolled as a pre-medical student but quickly changed his major to art history. His first exhibition was at the Blum Helman Gallery in 1975. This switch to Art is not surprising considering the interest in art his family has had, for generations, both as artists and patrons of the arts. Later, after meeting Blixen in Denmark ), he purchased a 43-acre (170,000 m2) farm in Africa. This piece of land was adjacent to her Karen farm in Kenya, and to Giraffe Manor at the foot of the Ngong Hills � a property which he named "Hog Ranch".

Near Fine. A wonderful bright clean copy without any marks, writings, stamps, or bookplates attached nor any indication of any removed. Clear Mylar covering is now the dust jacket to protect your investment. Unclipped. Minor bumping to one corner of the book. Overall the book exhibits excellent qualities and would make a fabulous addition to any rare book library. All photos of the actual book.

Gilbert Charles Stuart (born Stewart; December 3, 1755 ? July 9, 1828) was an American painter from Rhode Island. Gilbert Stuart is widely considered to be one of America's foremost portraitists. His...