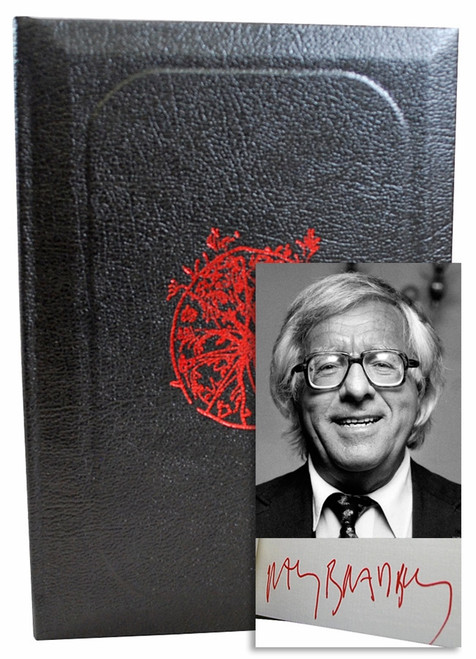 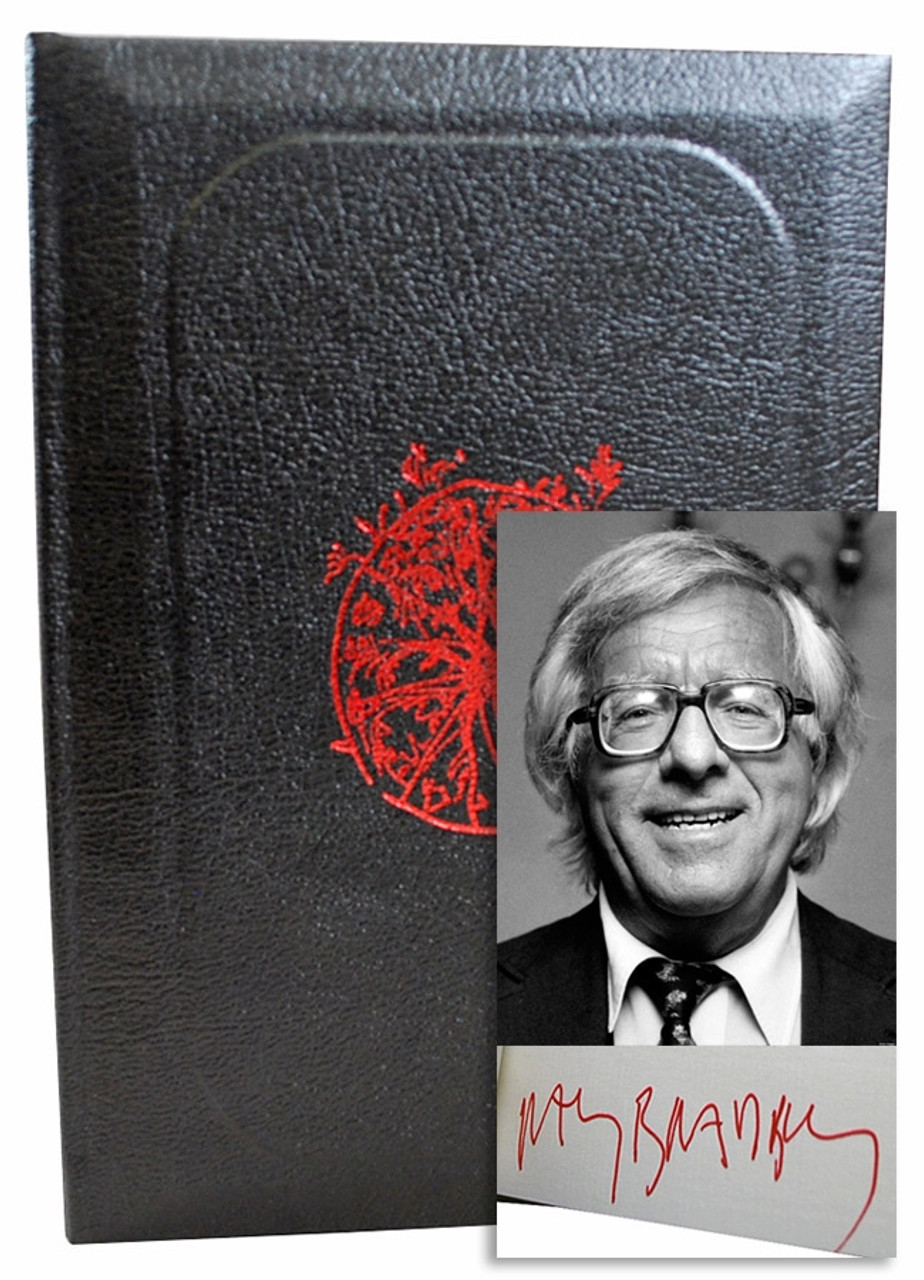 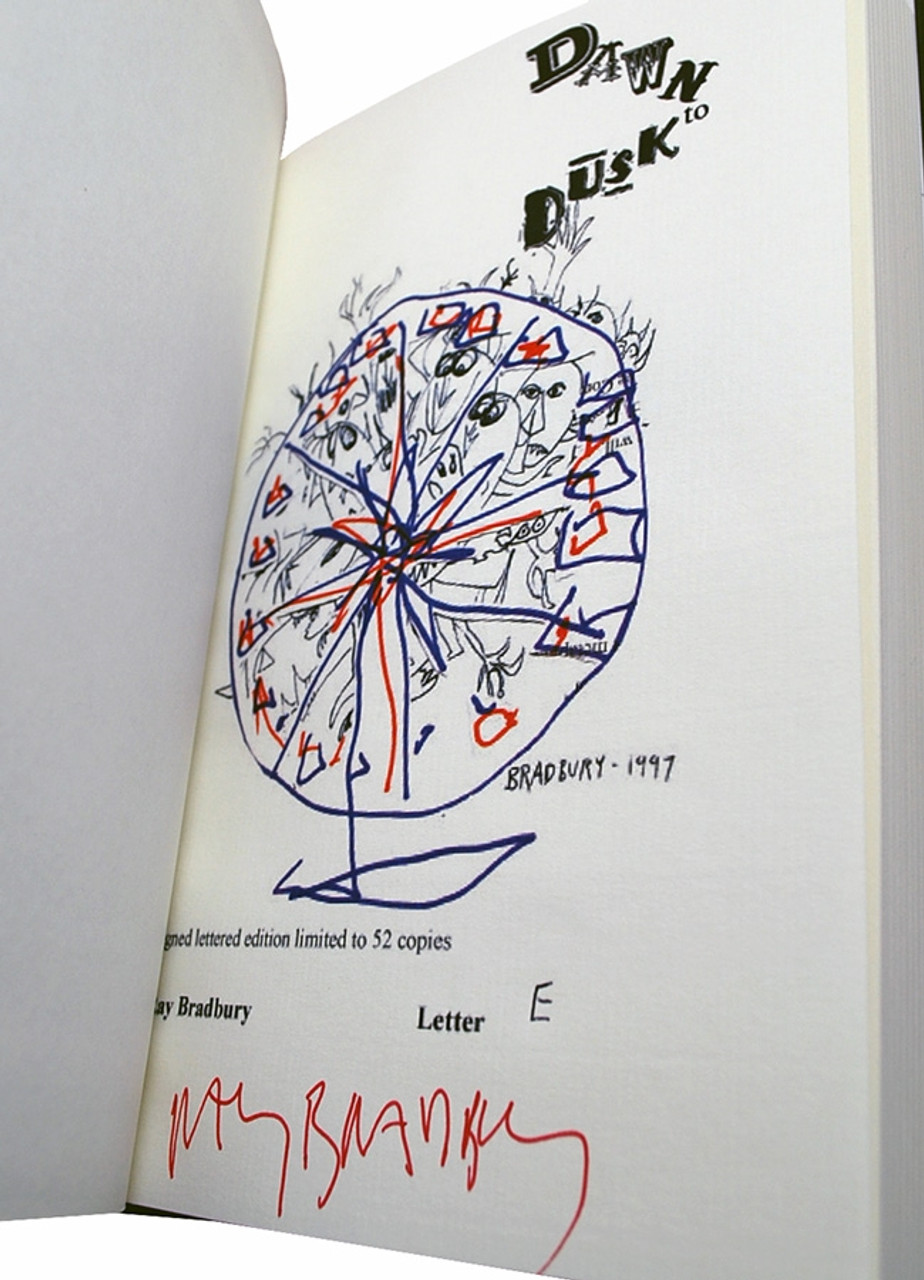 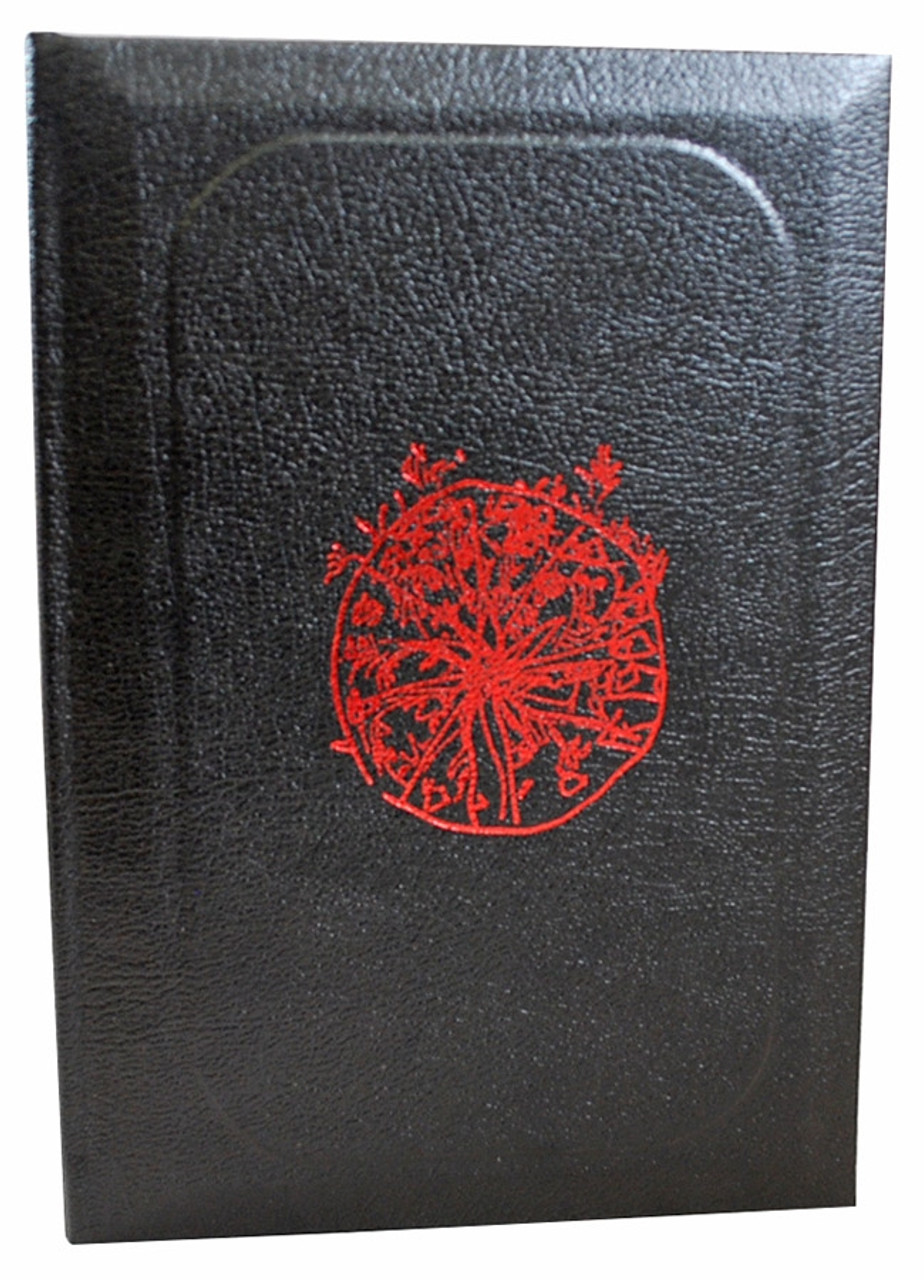 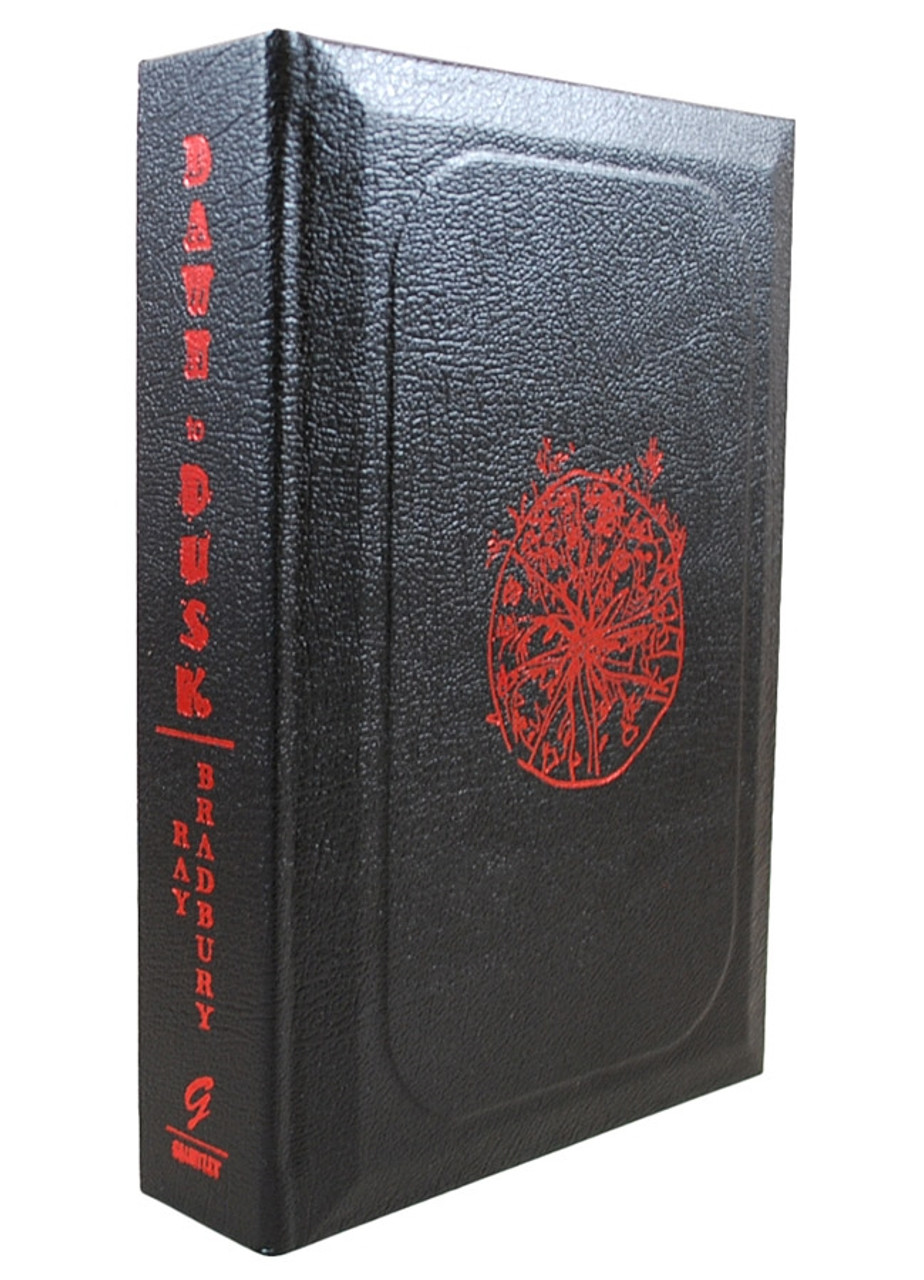 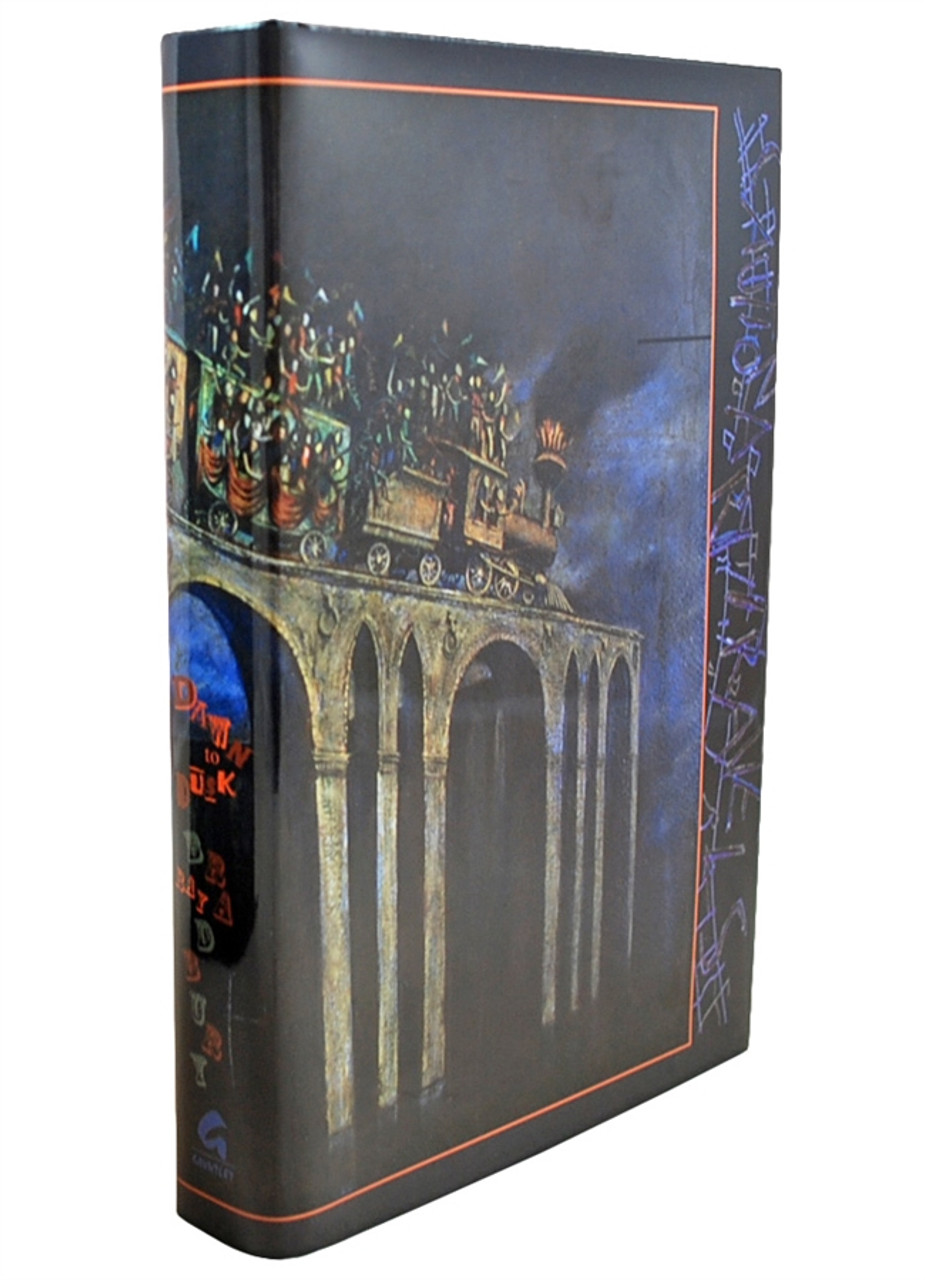 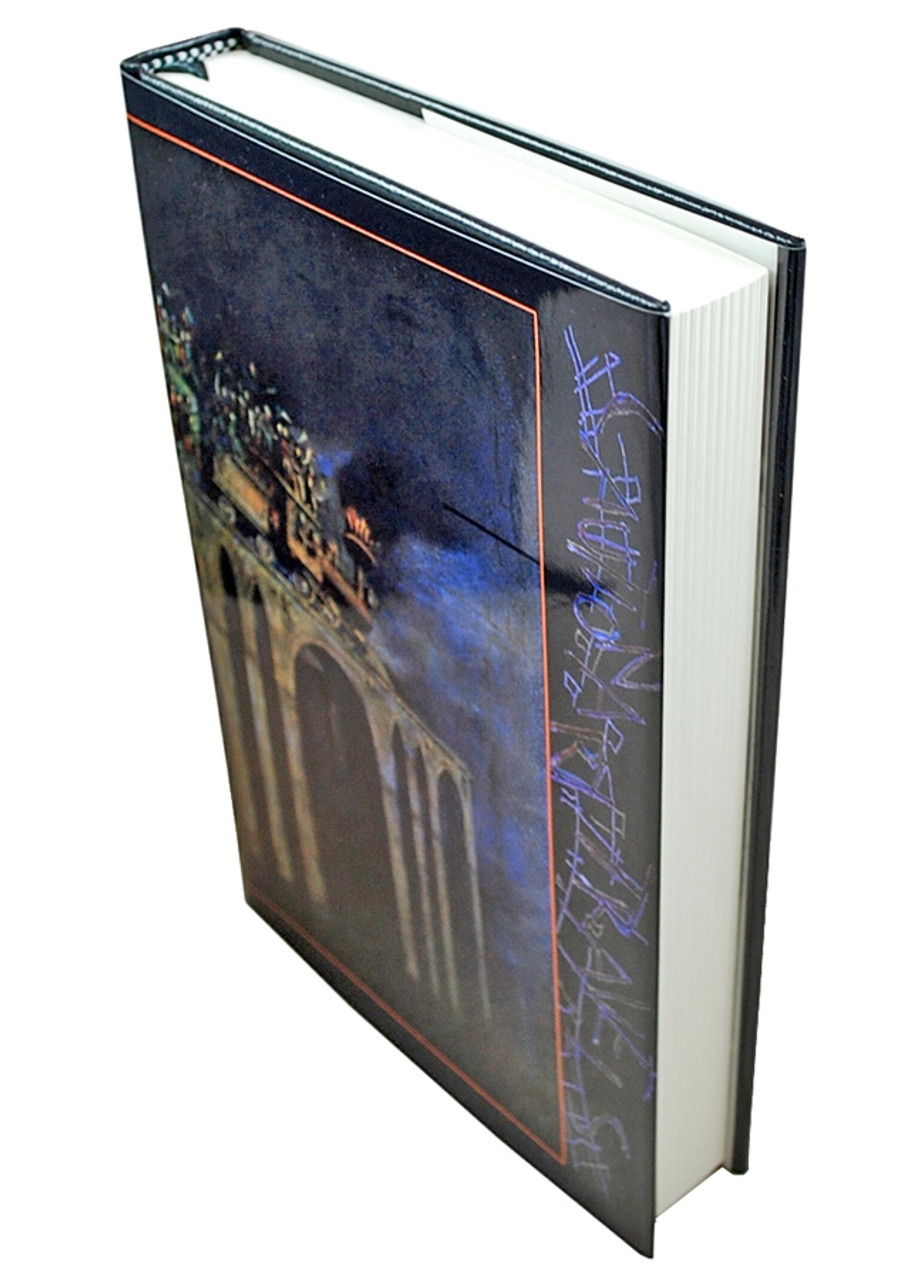 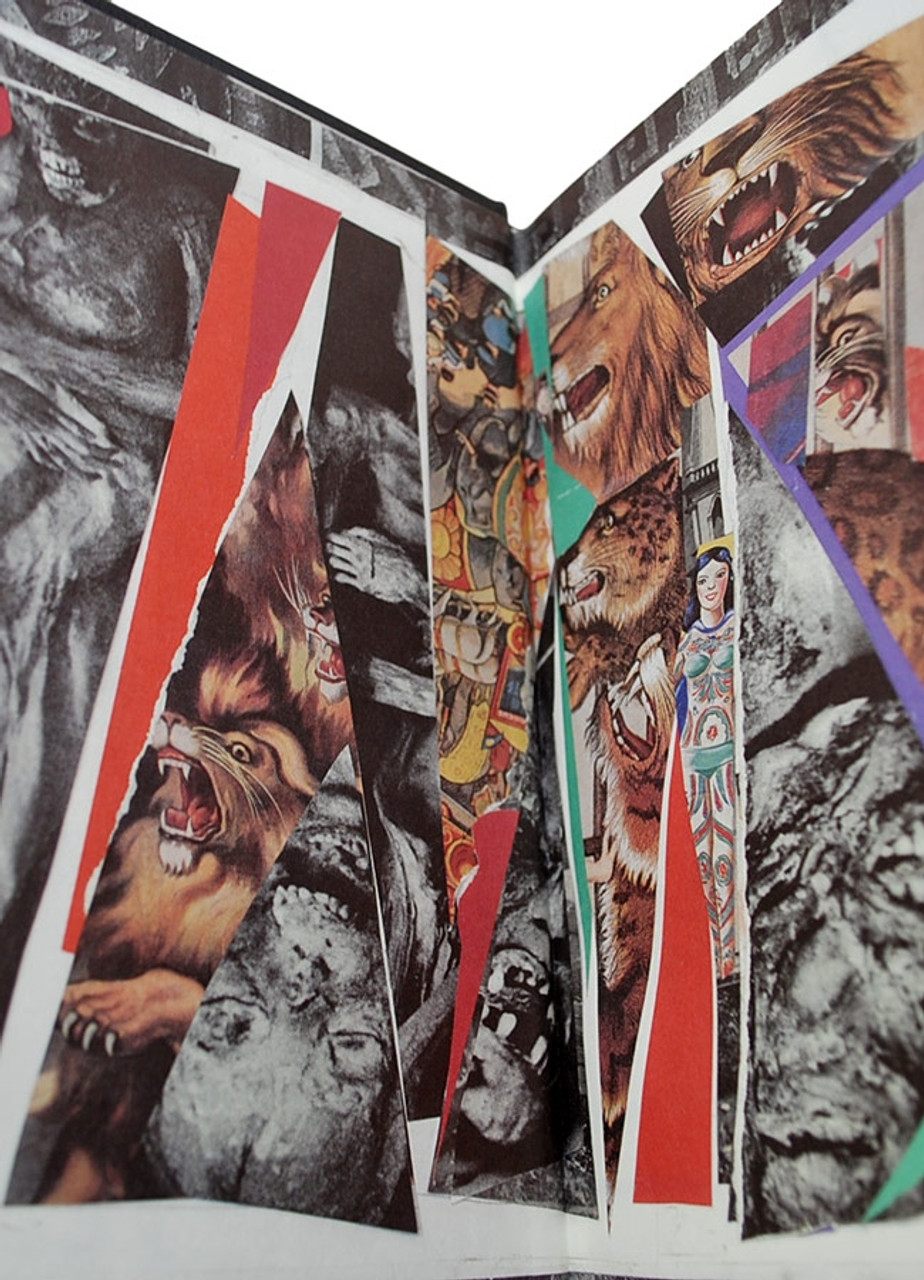 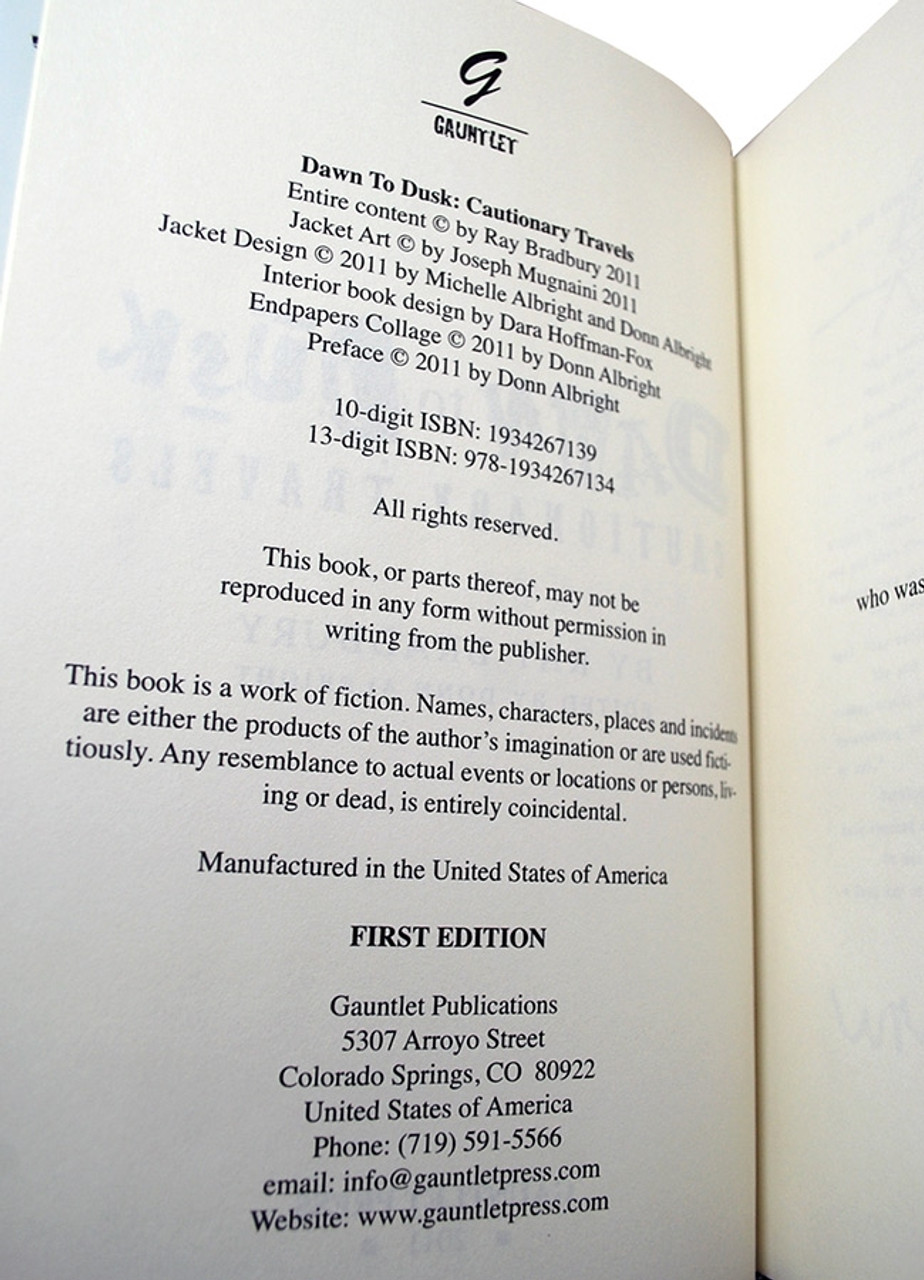 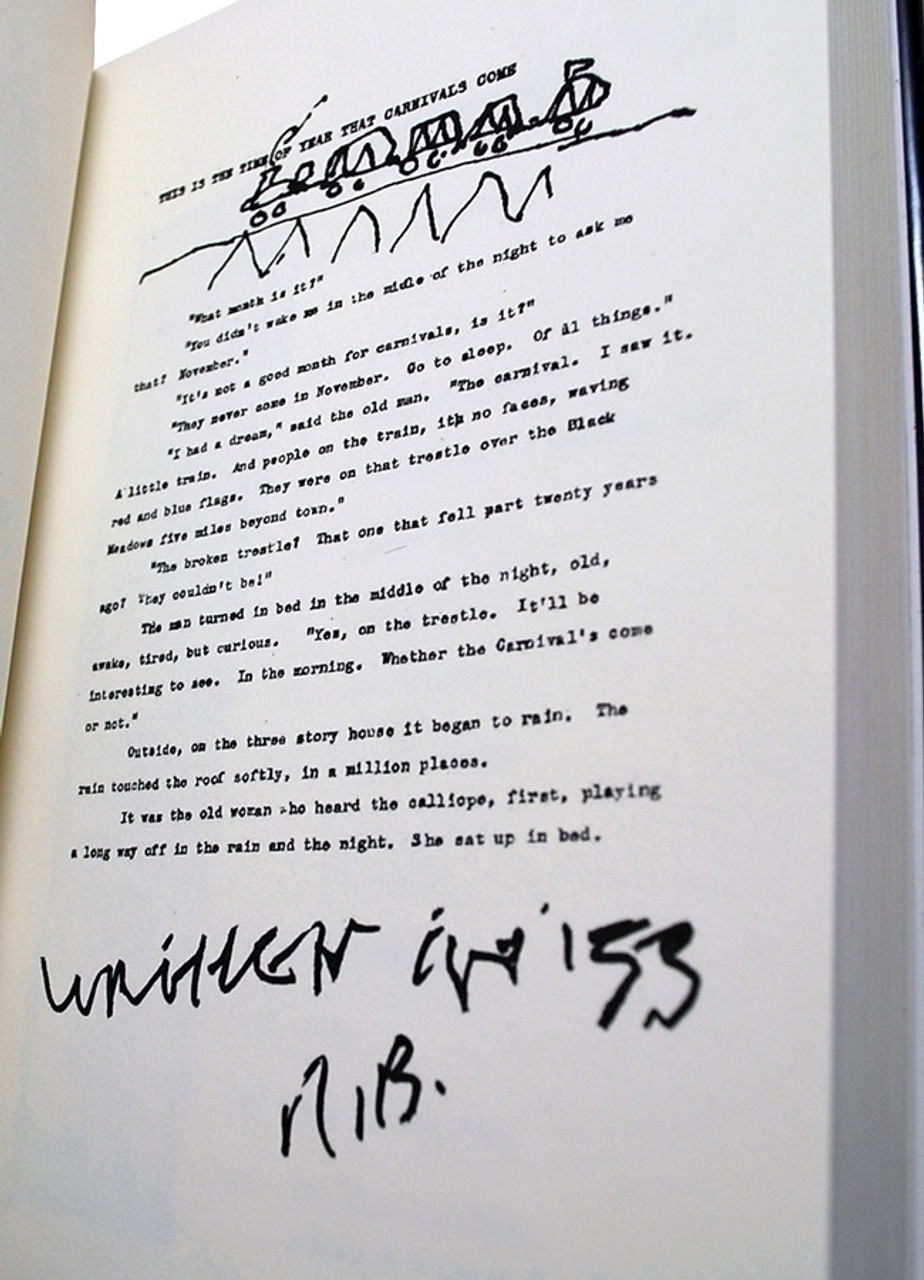 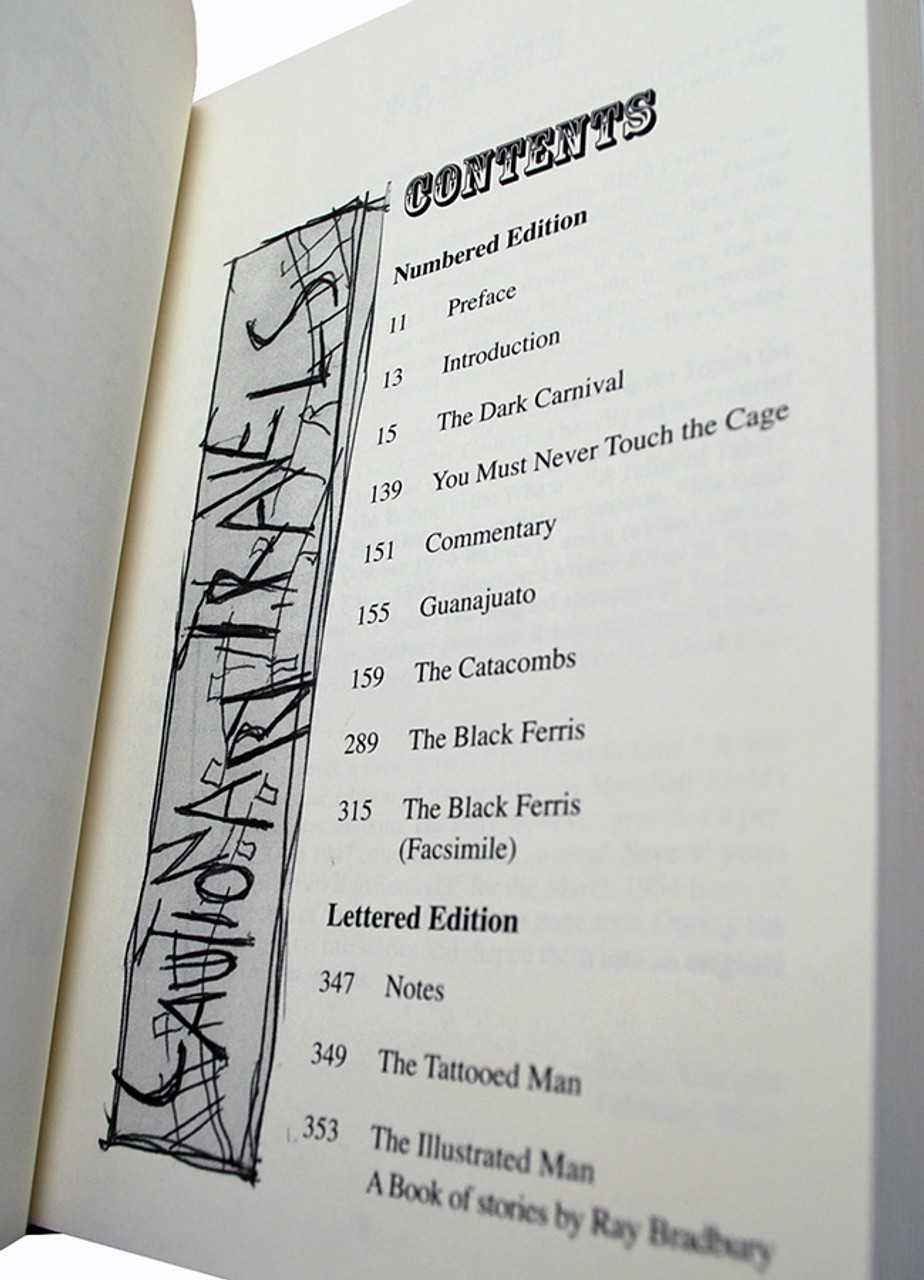 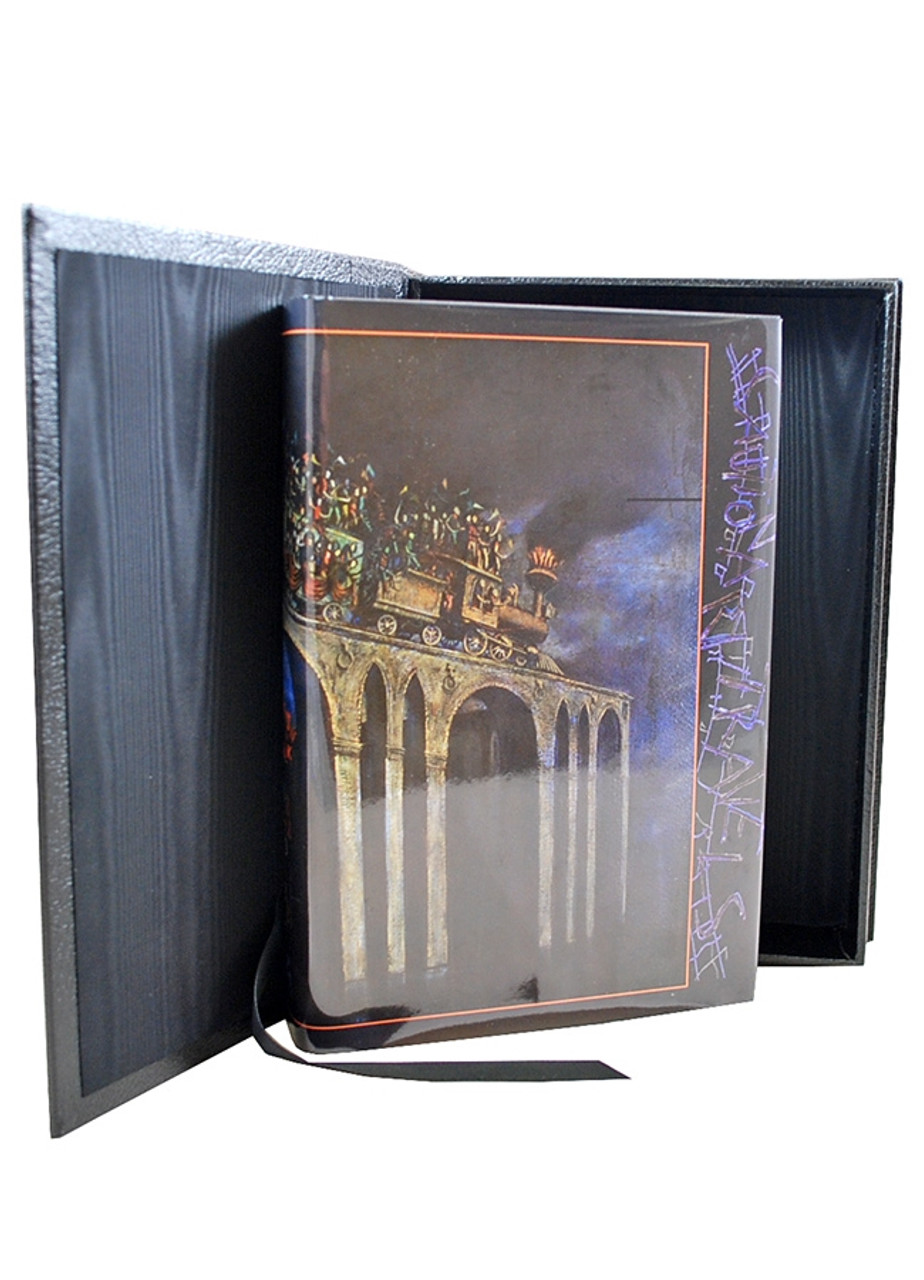 Personally signed by Ray Bradbury. Limited to only 52 produced in this edition.

Gauntlet Press. 2011. Ray Bradbury "Dawn To Dusk: Cautionary Travels". Signed Lettered Edition of only 52 available. Personally signed by Ray Bradbury directly onto the limitation page of the book. This edition is bound in a premium cloth and housed in a matching tray-case. This edition is now OUT OF PRINT and sold out from the publisher. FIRST EDITION as stated on the copyright page. Very Fine without any flaws. All photos of actual item. 358 pages. Edited by Donn Albrigh

This edition includes a handsome black tray-case with bright red titling, lined in black silk with a bound-in lift-up ribbon. The book is in Very Fine condition with the original colorful dust-jacket and bound-in silk bookmark. This edition contains two unpublished and un-produced screenplays: "Dark Carnival" (1955-59) and "Catacombs" which is a combination of "Dark Carnival" (1947) and "Interval in Sunlight" (Esquire, 1954). It also includes the unpublished short story, "You Must Never Touch the Cage." This lettered edition only also includes facsimiles of fragments and Bradbury sketches for "The Illustrated Man," that were not used for that publication 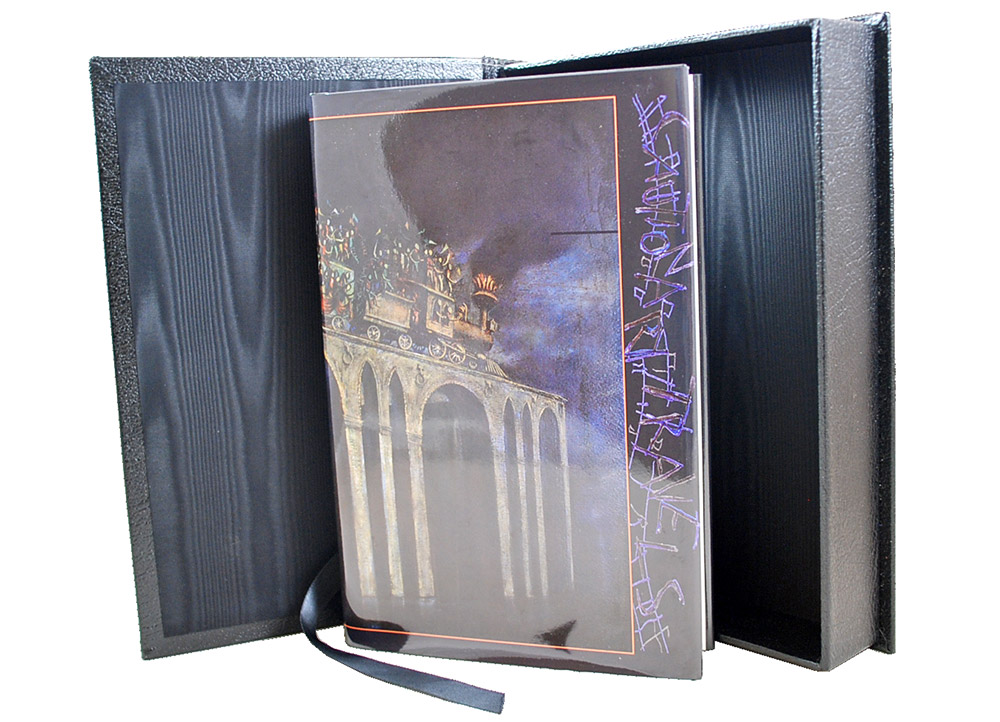 Ray Bradbury limited the number of tipsheets he signed for signed limited edition. Besides the lettered edition there are just 100 of the signed unnumbered edition, making them an even more unique collectible.


This edition was available in the following states:


This is Lettered E of the 52 signed traycased editions.

Dark Carnival (1955-59) was written with Gene Kelly in mind. It would later be reshaped into the novel Something Wicked this Way Comes (1962). This version is much darker. Catacombs is an integration of two of Ray's stories, "The Next in Line". (Dark Carnival, 1947) and "Interval in Sunlight".

The unpublished short story "You Must Never Touch the Cage", serves as an interesting bridge between the two screenplays. It was originally planned for the 1955 edition of The October Country, but was omitted prior to publication.

The lettered edition contains facsimiles of fragments and Bradbury sketches the were done in preparation for The Illustrated Man, but never used.

The cover art is a painting by Joe Magnaini. This cover was Bradbury's introduction to Magnaini's art and the beginning of five decades of close collaboration and friendship.

"Dawn to Dusk is rather like visiting an archeological dig, in that you can clearly see the skeletal system upon which the flesh of the novel was hung - I highly recommend this book, to all Bradbury fans for the literary history interest, and to anyone else who just enjoys a great read!" - Shroud Magazine

"Not just for Bradbury fans and completists, DUSK TO DAWN is a thoroughly entertaining collection of masterful entertainments that, sadly, never reached production." - The Tomb of Dark Delights

Lettered signed limited edition, lettered "E". Bound in a premium cloth and housed in a matching traycase.
VERY FINE GUARANTEED. A wonderful bright clean copy free of any markings, writings, or stamps. Sharp corners that have not been bumped. Unread book with square and tight binding. No bookplates attached or indication of any removed. Edges are free of any marks, spots, scratches, or blemishes.