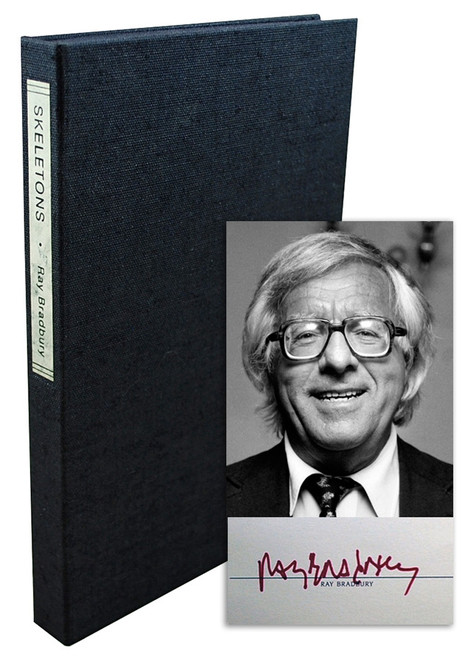 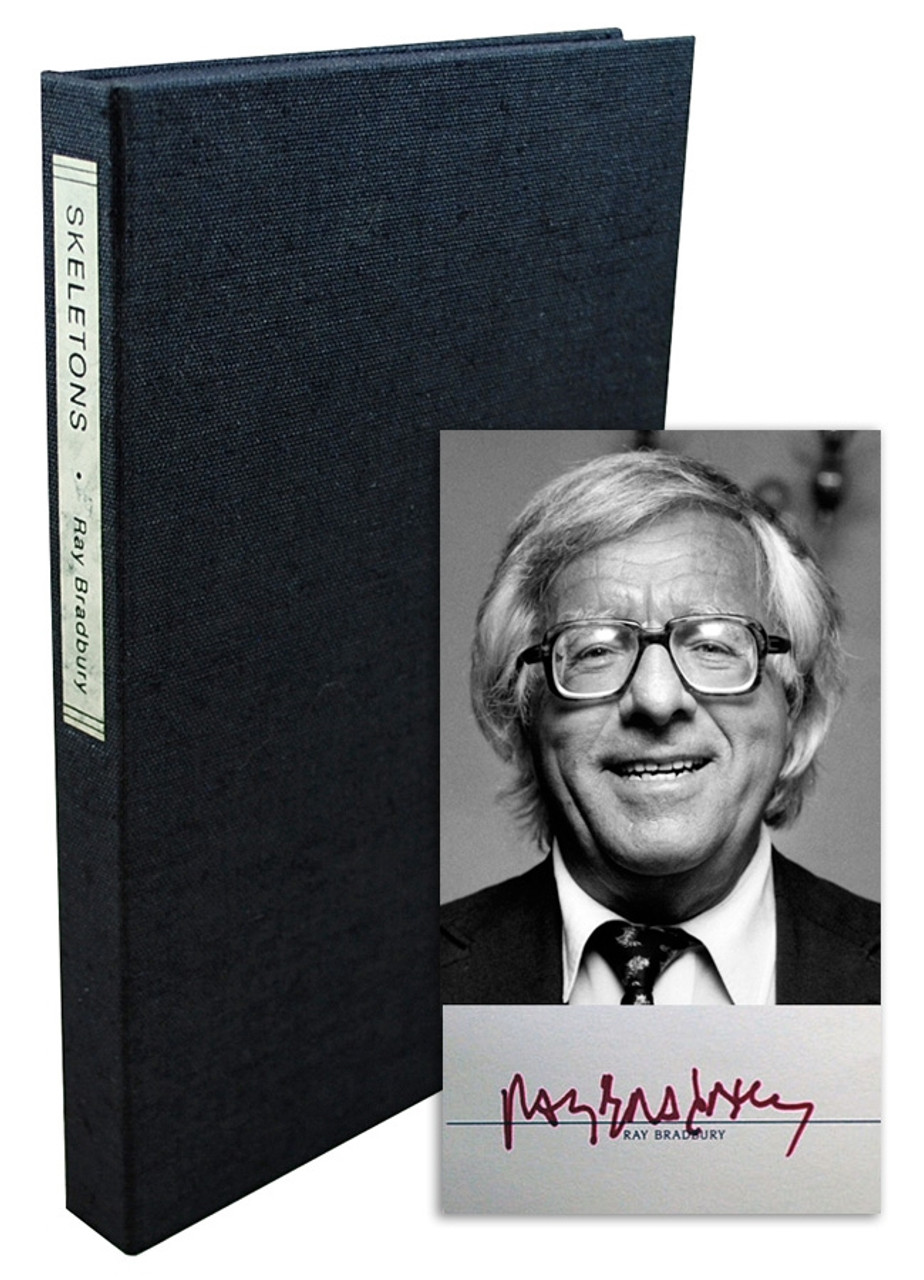 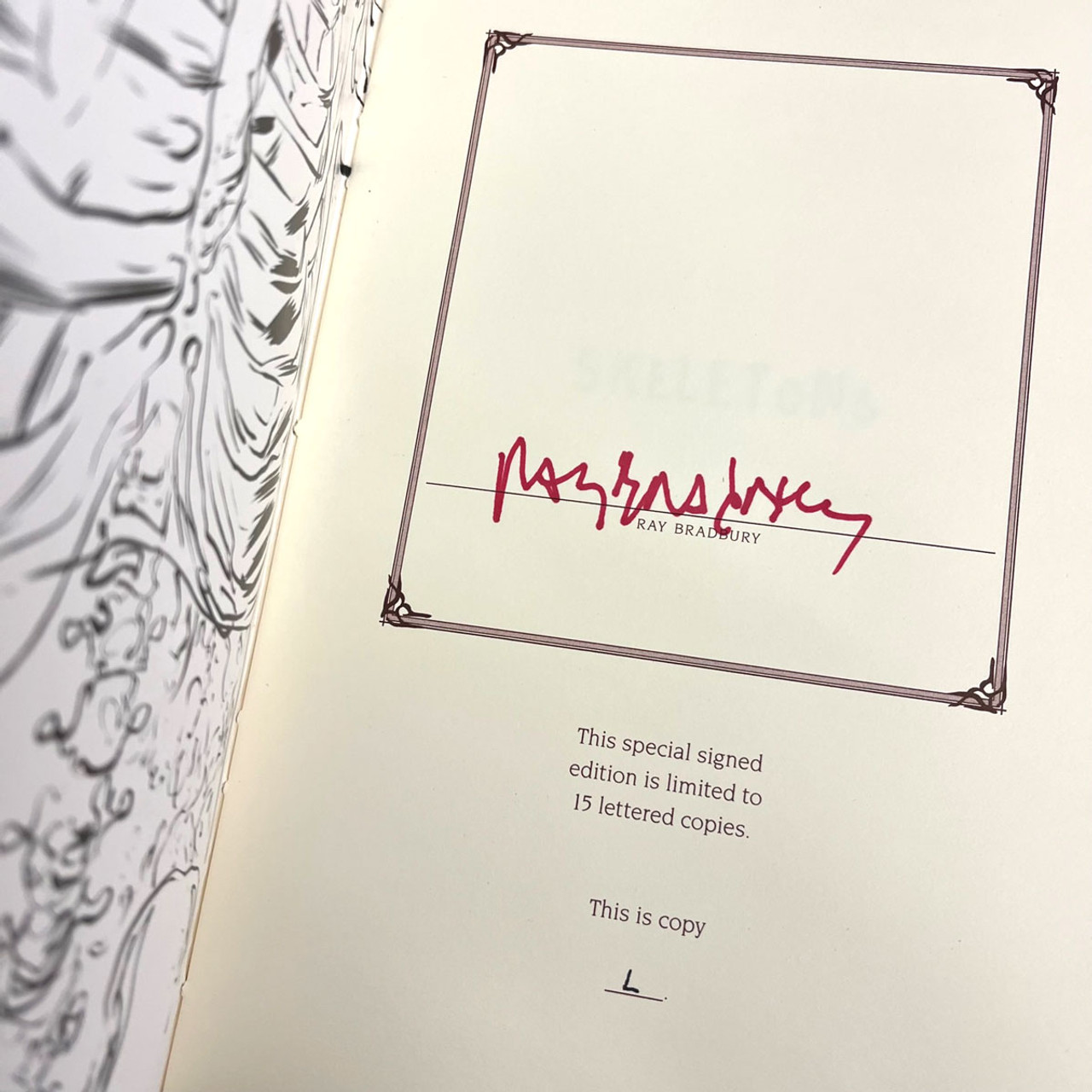 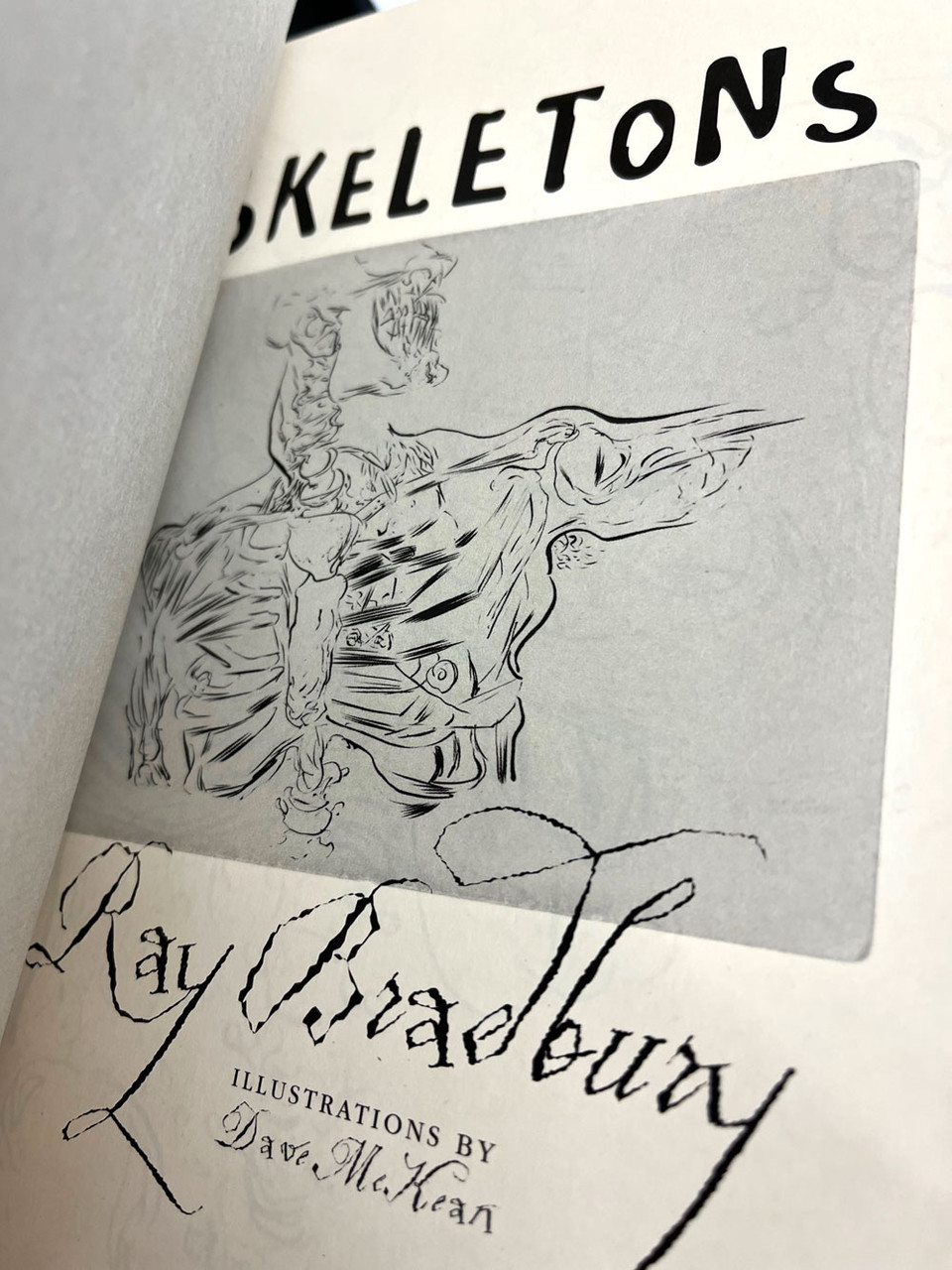 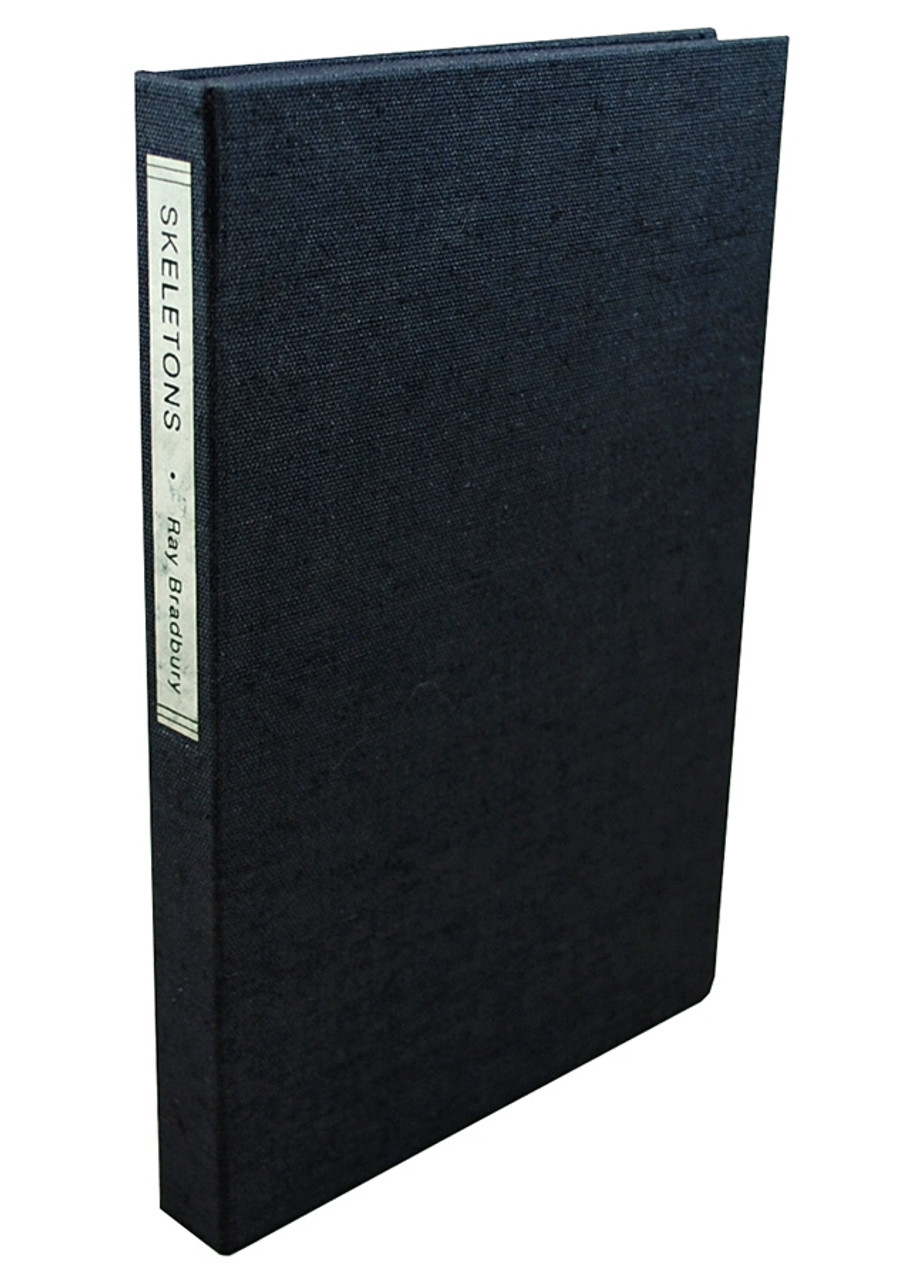 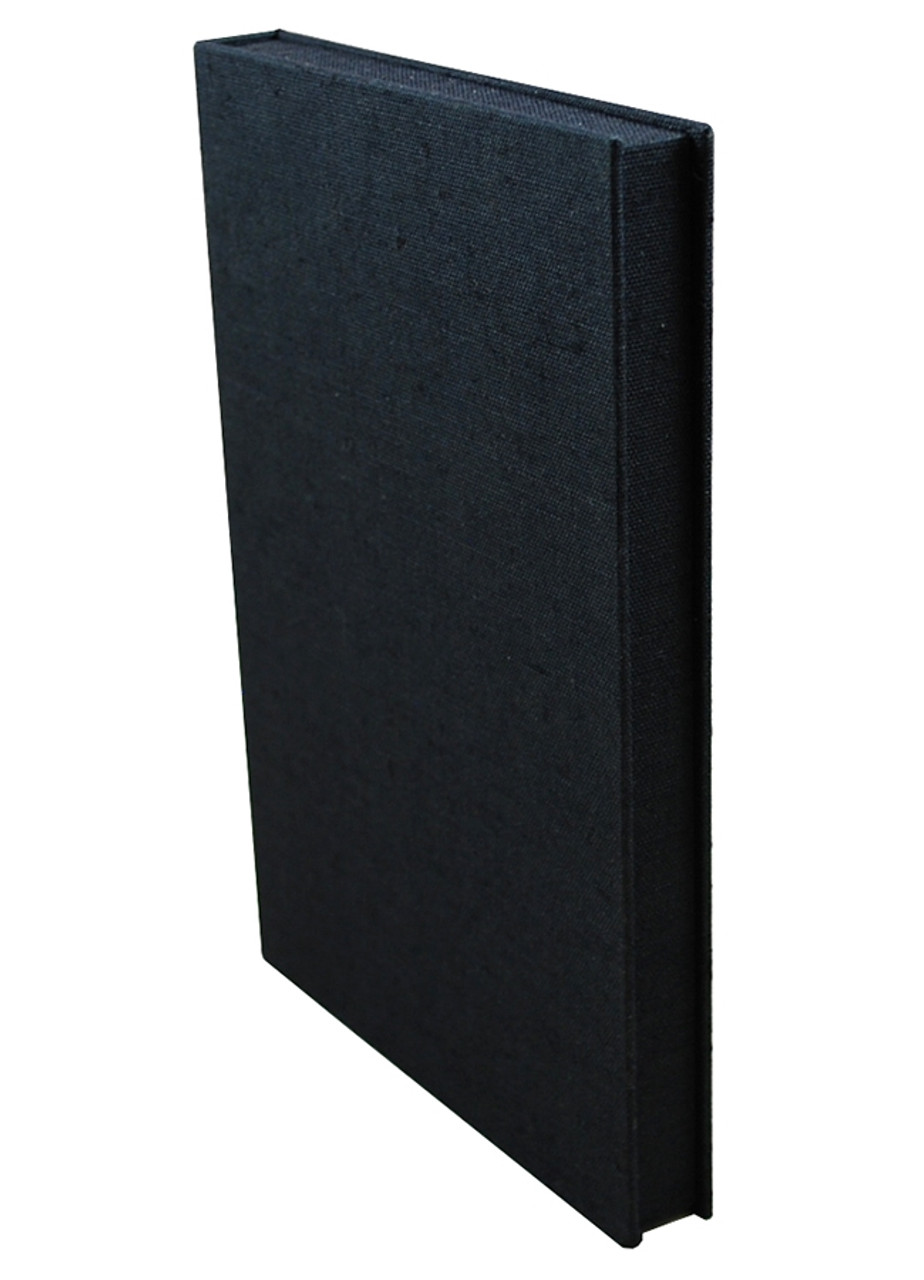 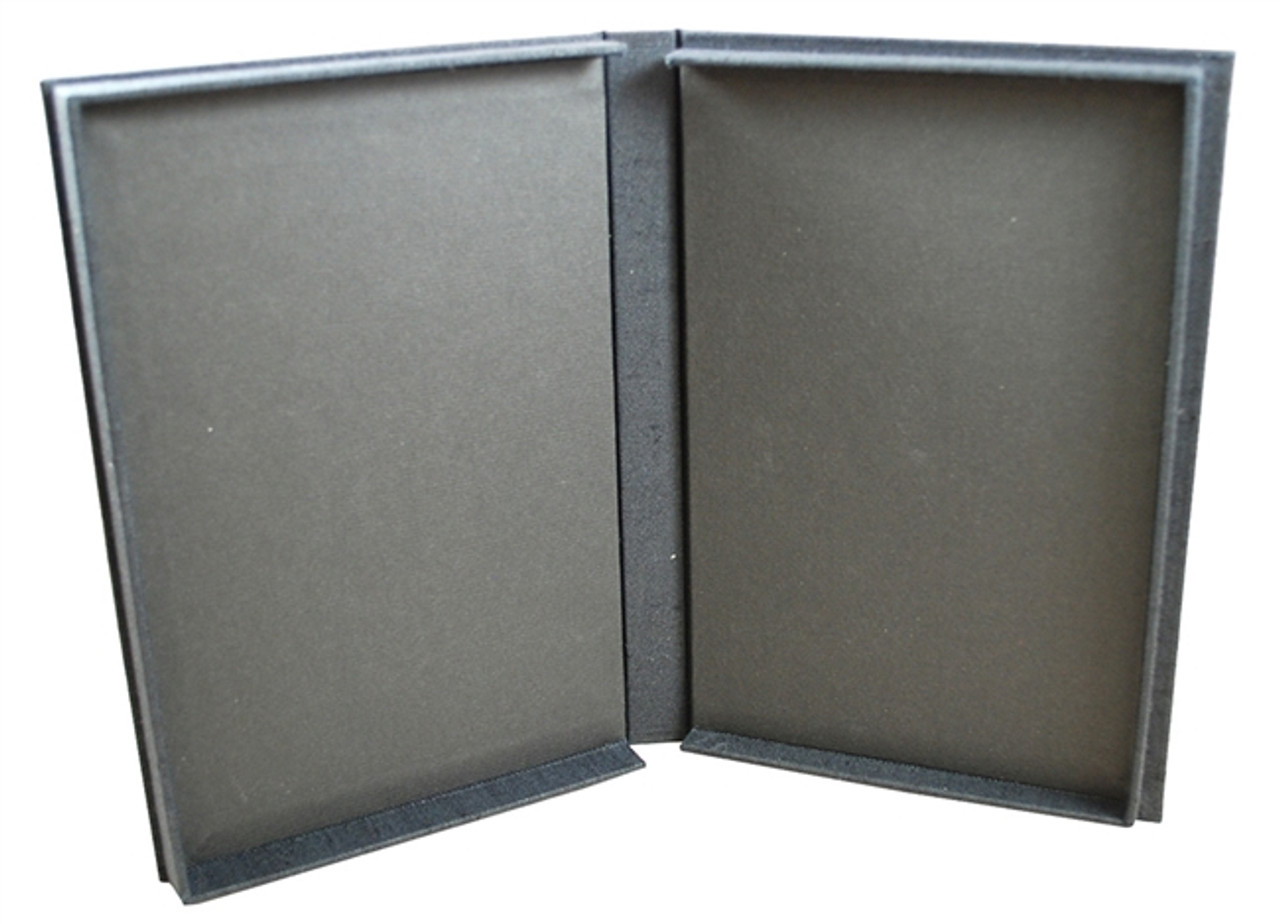 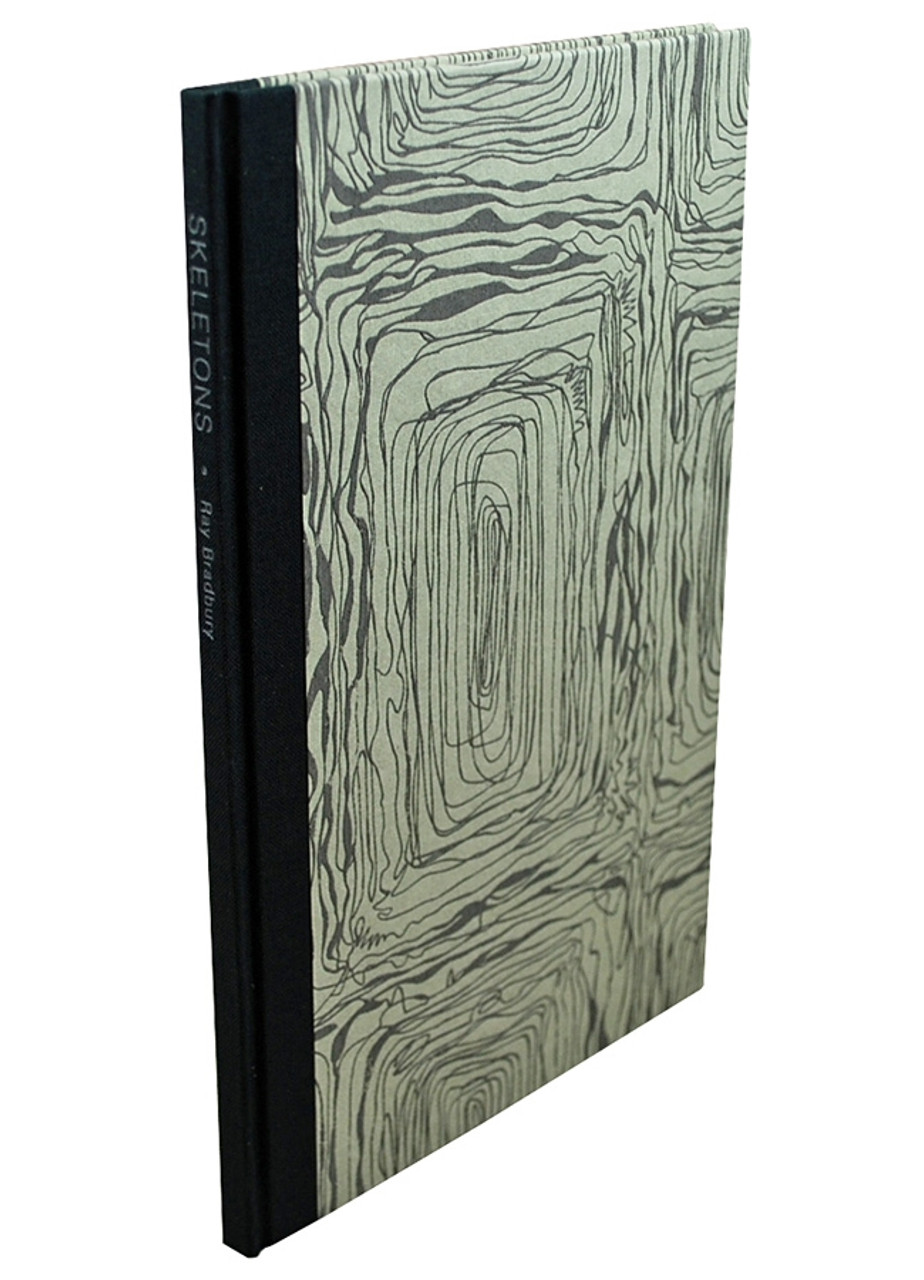 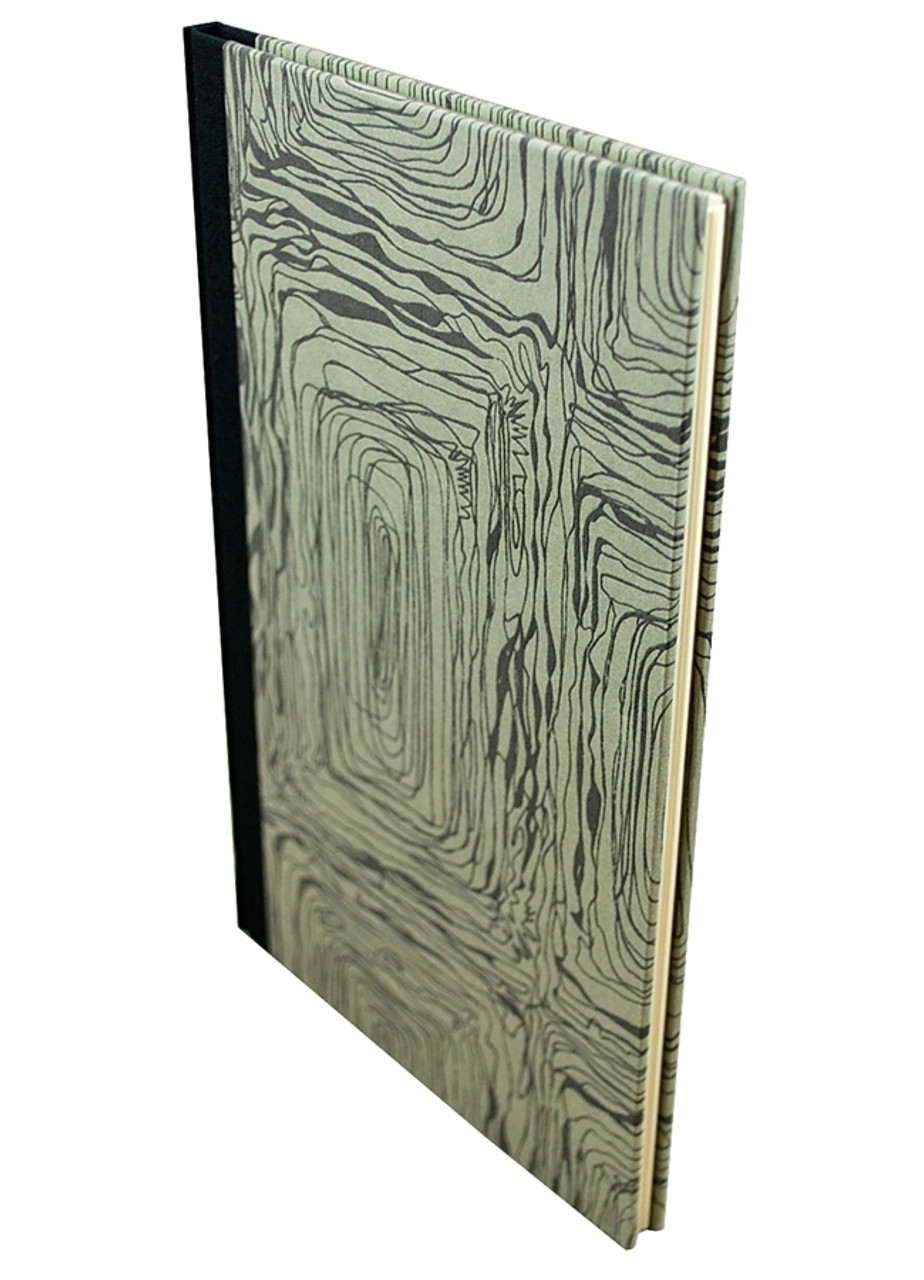 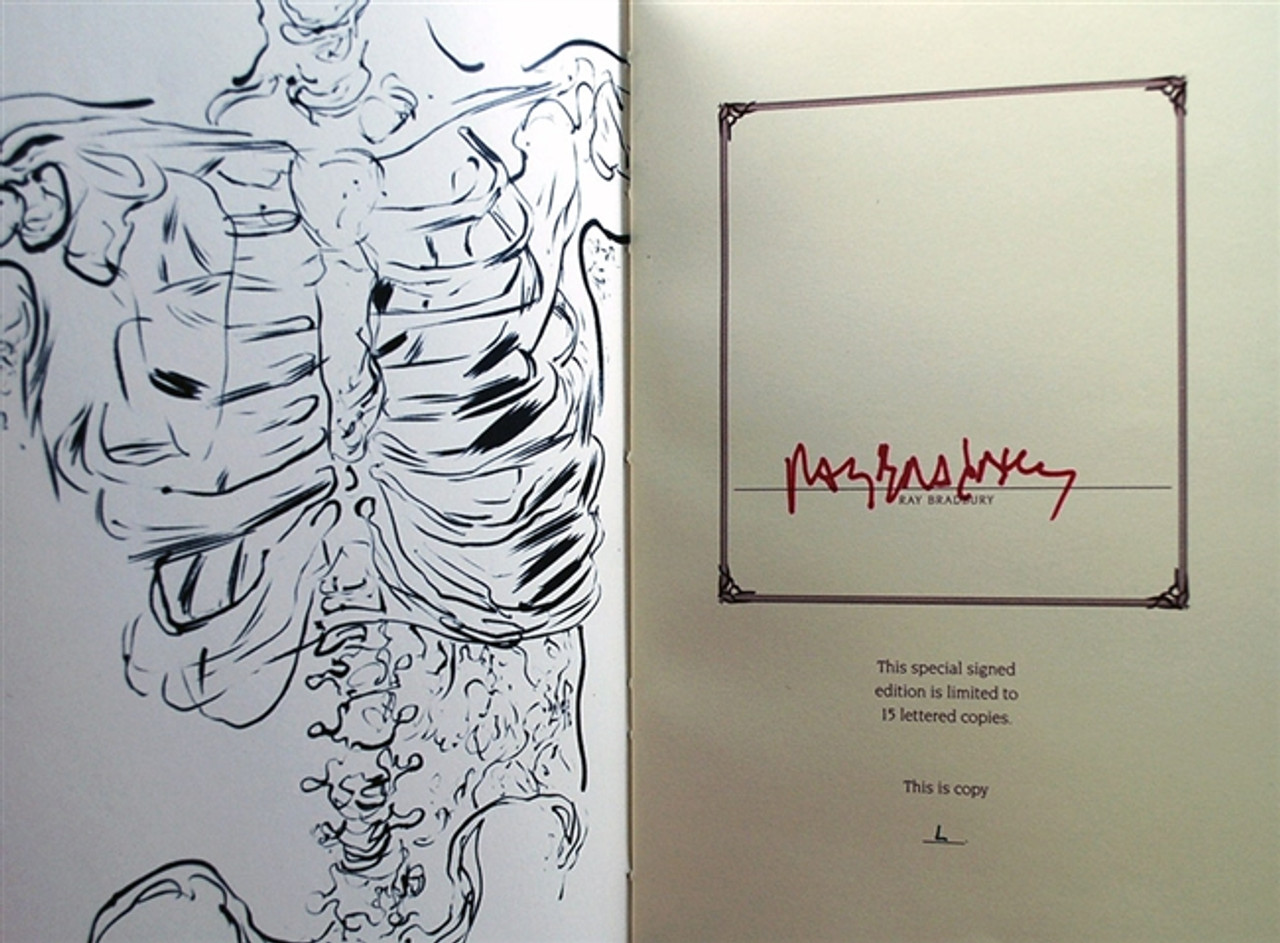 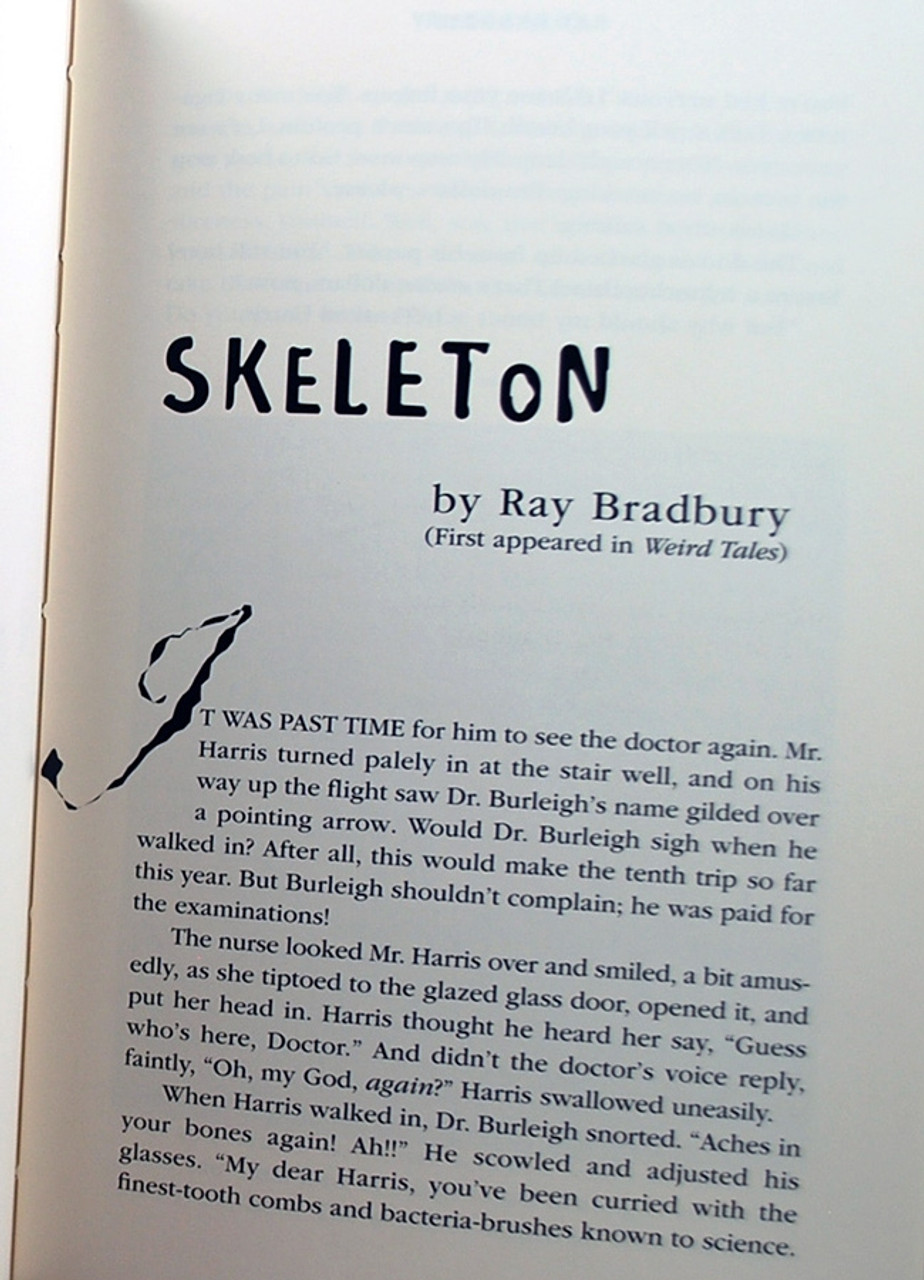 Personally signed by Ray Bradbury directly onto the limitation page. Limited to only 15.

Subterranean Publication 2008. Ray Bradbury "Skeletons". Signed Lettered Edition "L" in Tray-case. Limited to only 15 lettered copies in this edition. Personally signed by Ray Bradbury directly onto the limitation page of the book. Very Fine without any flaws. Cloth hardcover without dust-jacket as issued.

Virtually everyone has read Ray Bradbury's classic tale, "Skeleton," of a man who becomes aware of the bony framework housed inside his skin. What most readers don't realize is that this famous tale is Bradbury's second take on the idea. For the first time in over 60 years, the other tale, also titled "Skeleton", sees print alongside its classic counterpart, featuring a number of vignettes and text ornaments by Dave McKean.

Dave McKean has gone above and beyond for this chapbook. Instead of the four or five illustrations agreed upon, he has turned in more than twenty, and helmed the design of the chapbook himself.

McKean has won numerous awards and accolades. Over the years, he has been nominated five times for a World Fantasy Award in the category of "Artist," and he won the award in 1991. His graphic novel Cages won the Alph-Art, Pantera, and Harvey Awards for best Graphic Novel. He has been nominated six times and won three Spectrum Awards in the categories of "Advertising," "Book," and "Comic". His collection of short comics, Pictures That Tick won the V&A Museum Illustrated Book Awards Overall First Prize. In 2004, McKean won a BSFA Award in "Short Fiction" with Neil Gaiman for their work, The Wolves in the Walls. His film MirrorMask was nominated for the William Shatner Golden Groundhog Award for Best Underground Movie, the other nominated films were Green Street Hooligans, Nine Lives, Up for Grabs and Opie Gets Laid. Luna won Best British Feature at the Raindance Festival Awards, and also the Raindance Award at the Met British Independent Film Awards. In 2017 McKean was the inaugural recipient of the "Sergio Aragones International Award for Excellence in Comic Art", given as part of The Lakes International Comic Art Festival.

Lettered signed limited edition, lettered "L" in tray-case.
VERY FINE GUARANTEED. A wonderful bright clean copy free of any markings, writings, or stamps. Sharp corners that have not been bumped. Unread book with square and tight binding. No bookplates attached or indication of any removed. Edges are free of any marks, spots, scratches, or blemishes.