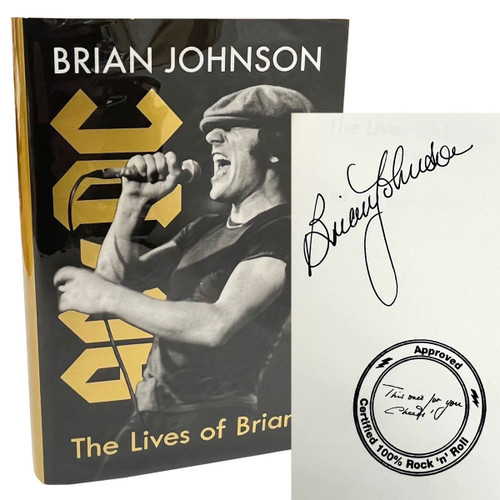 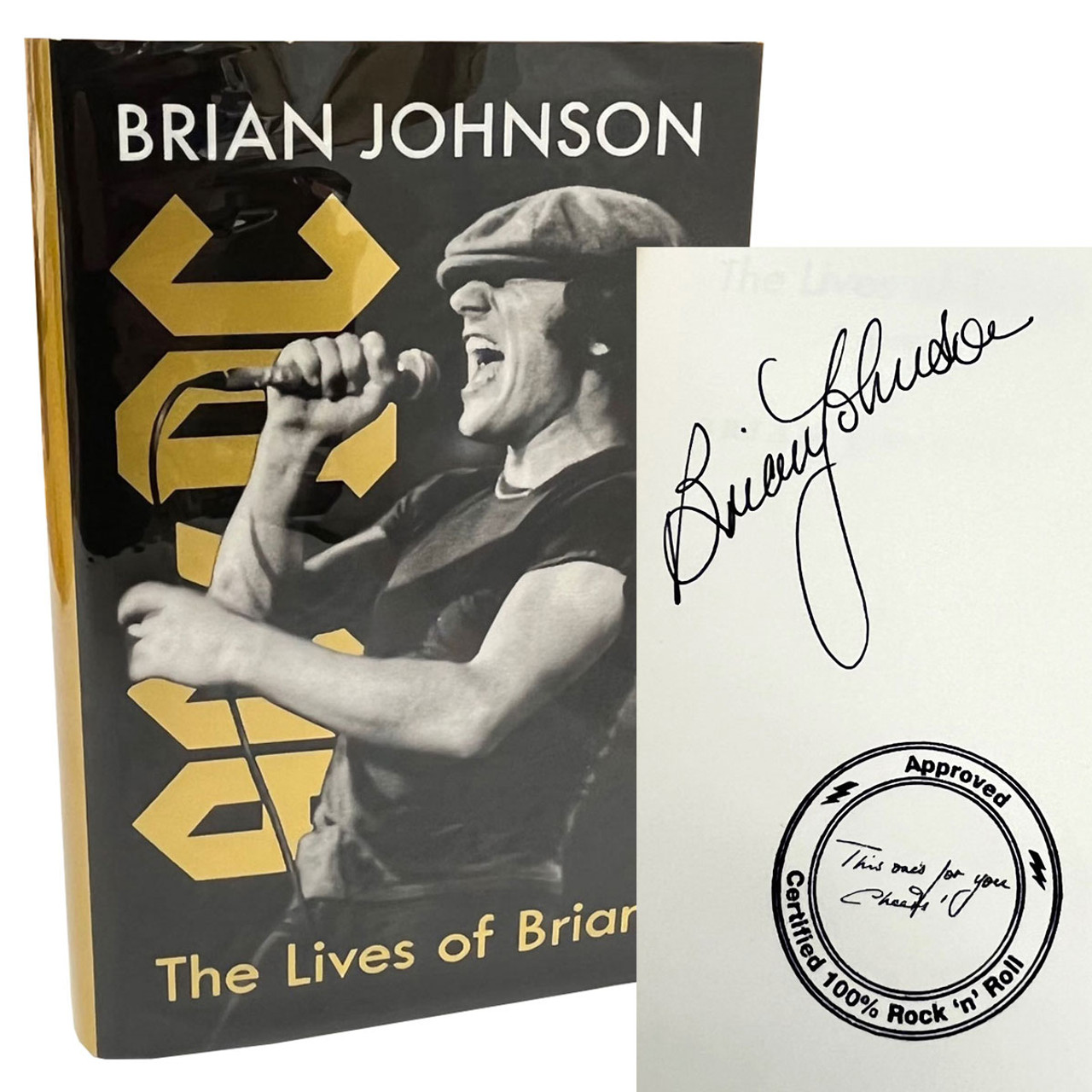 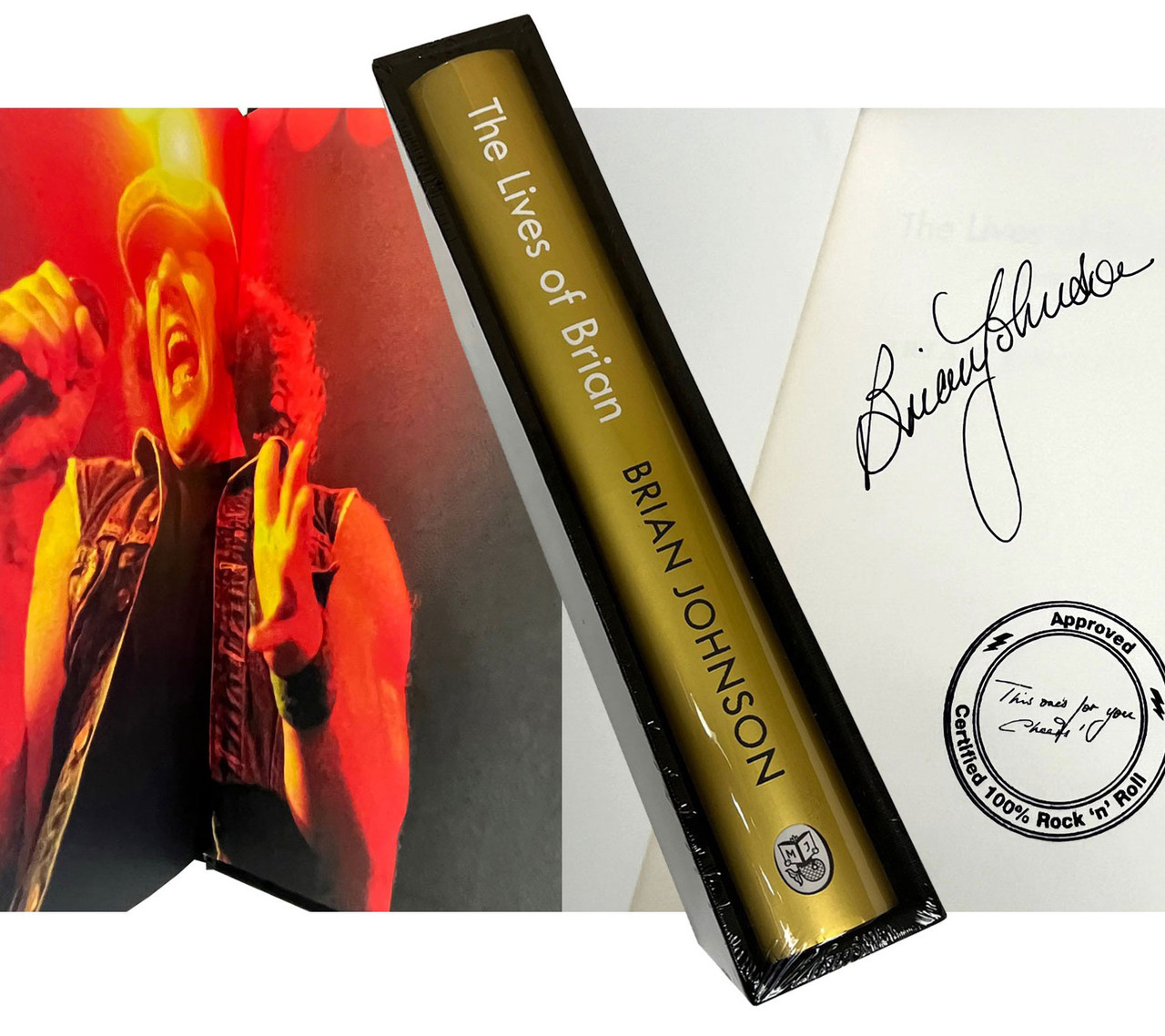 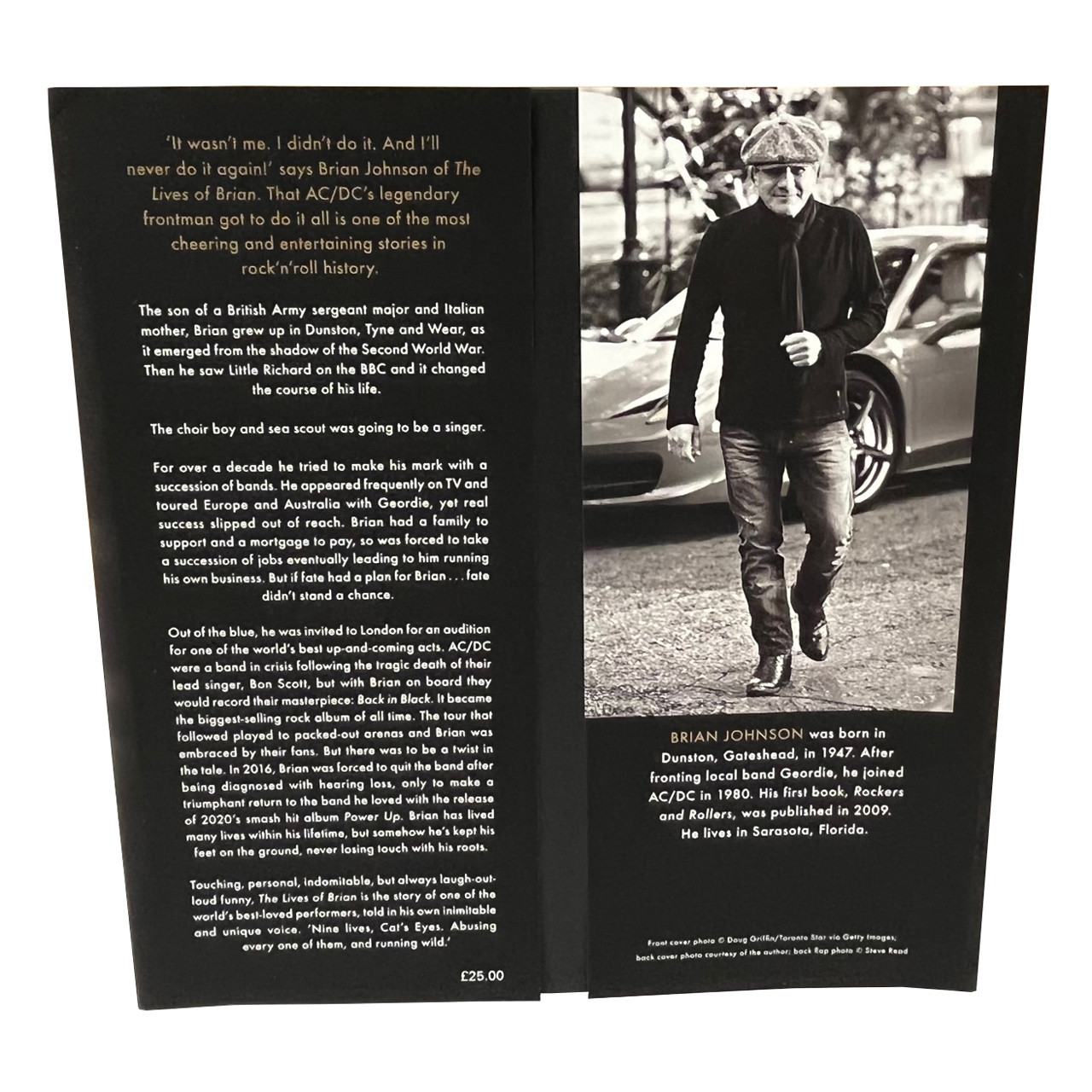 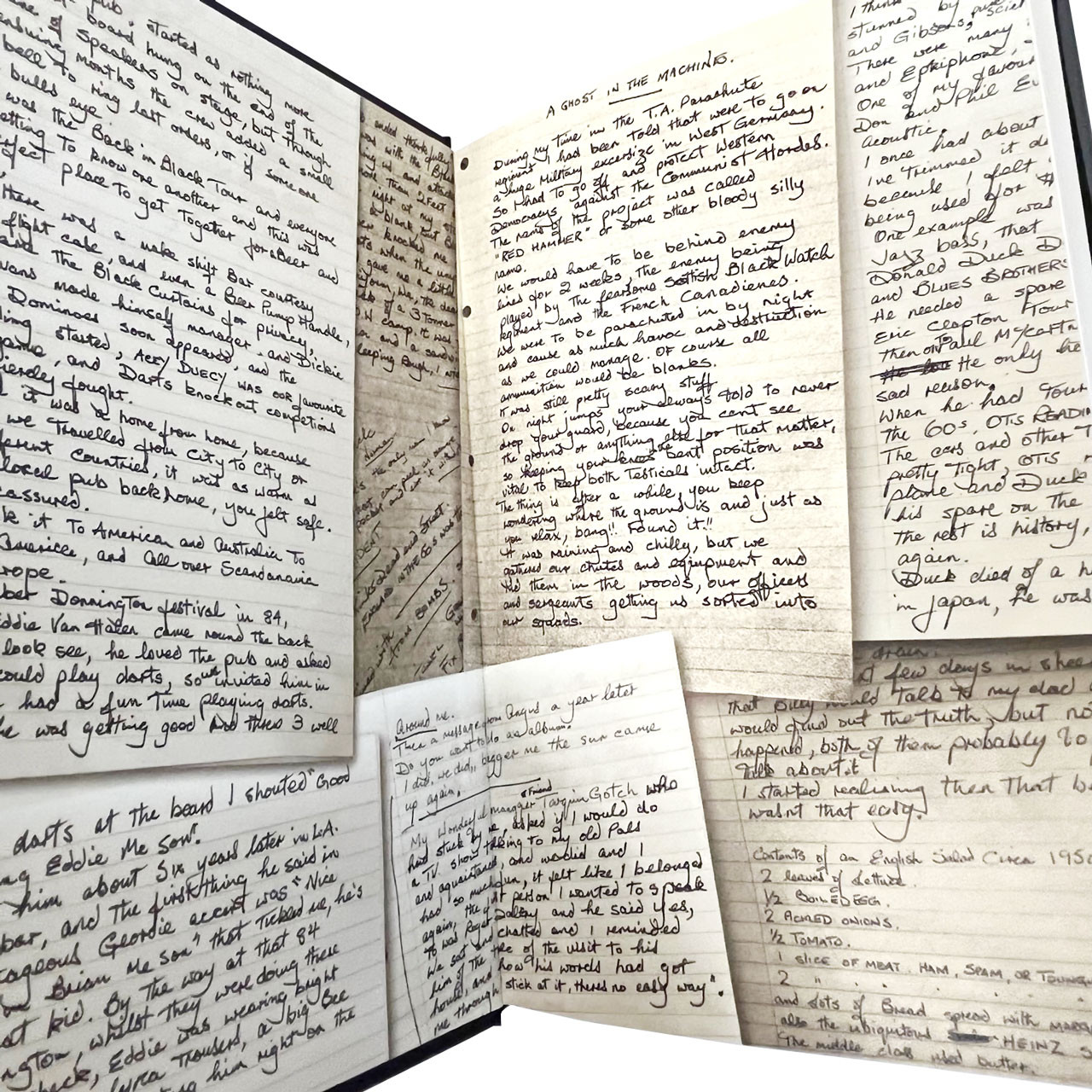 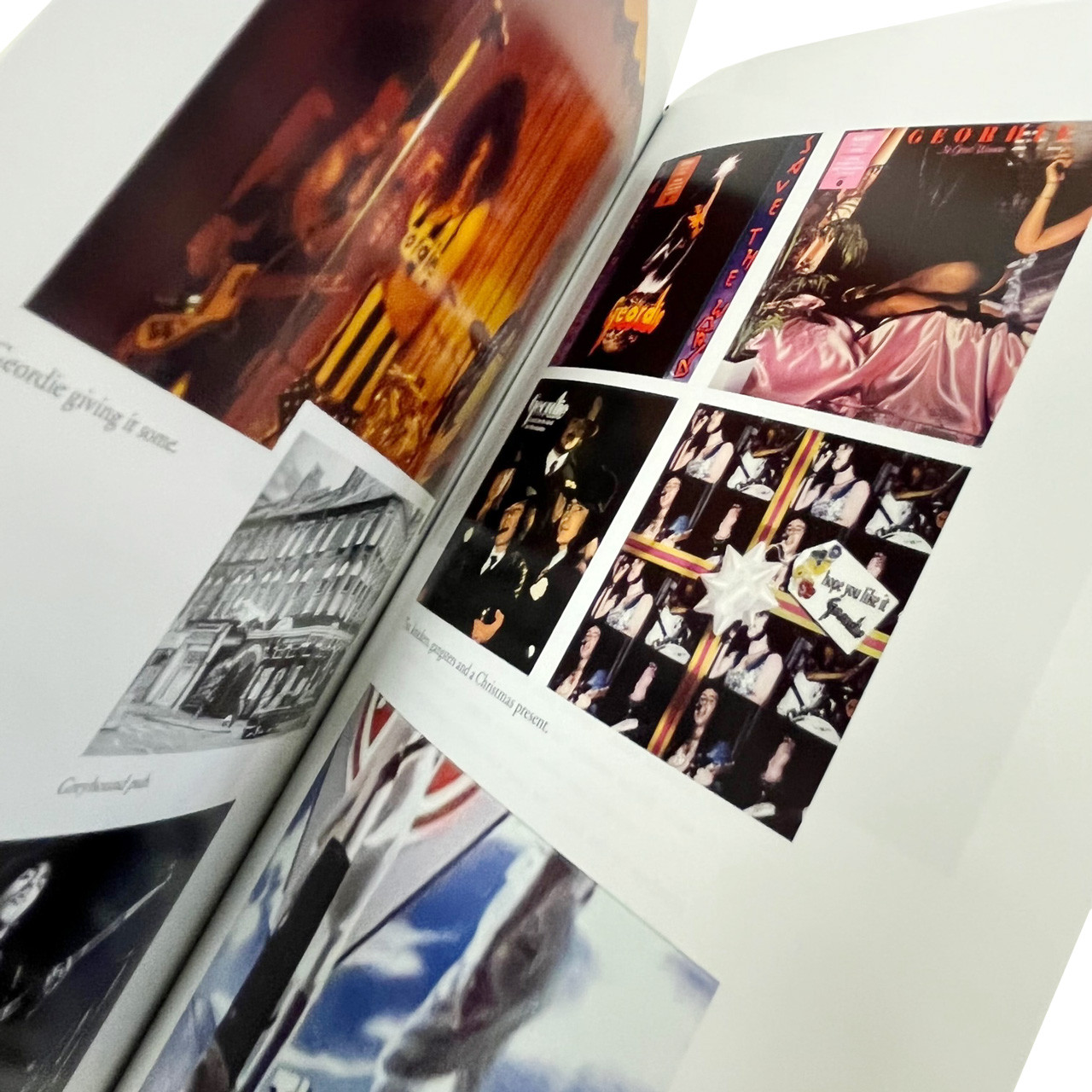 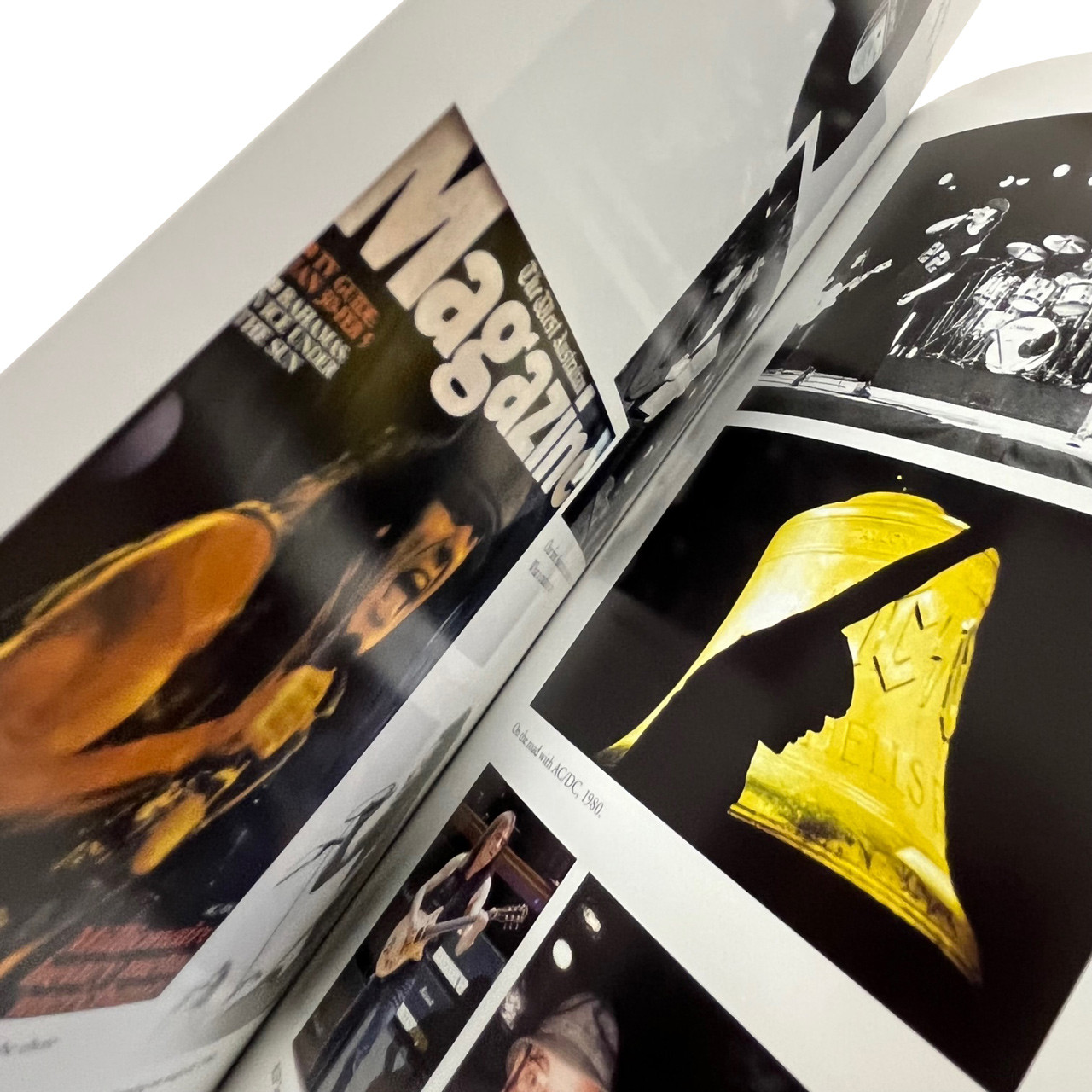 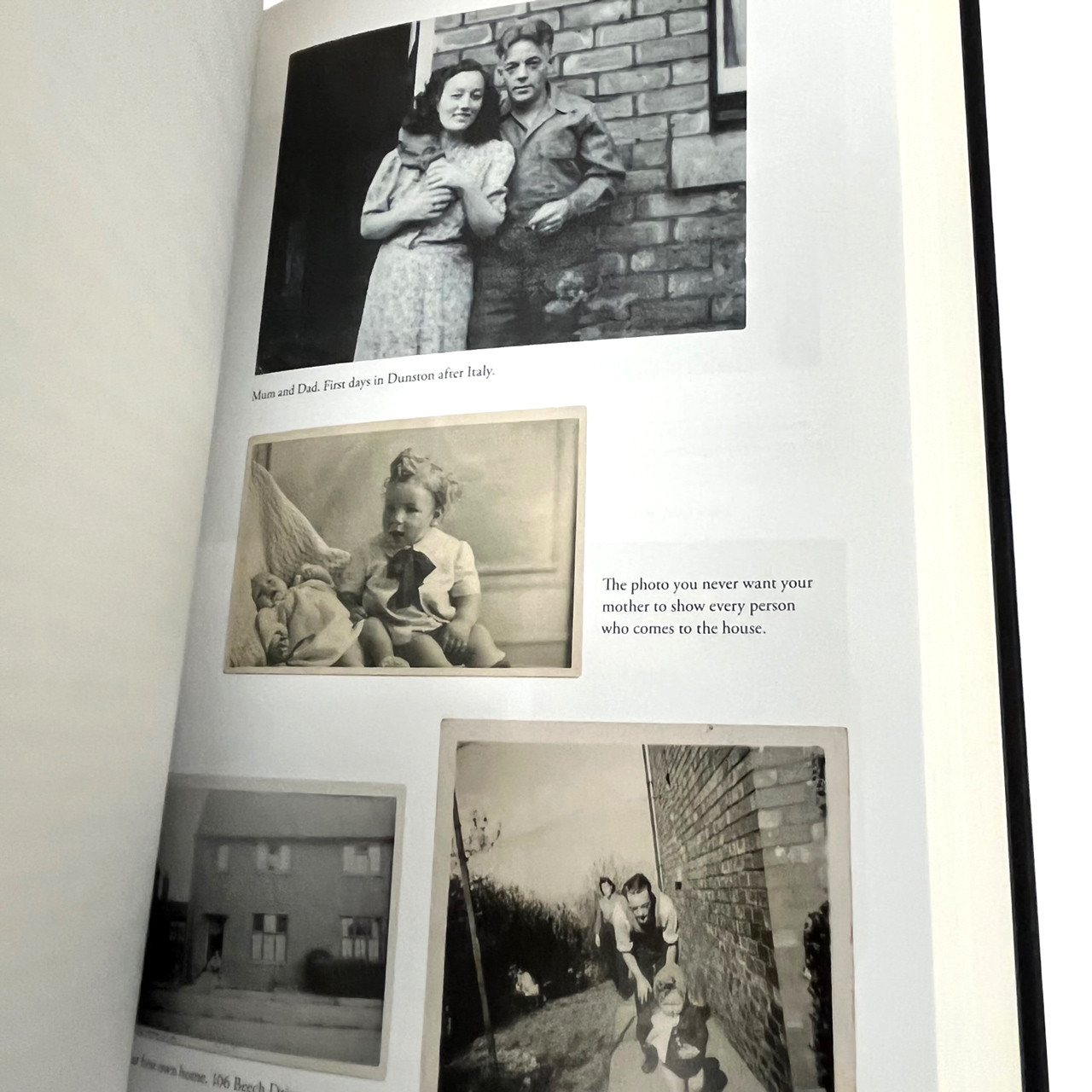 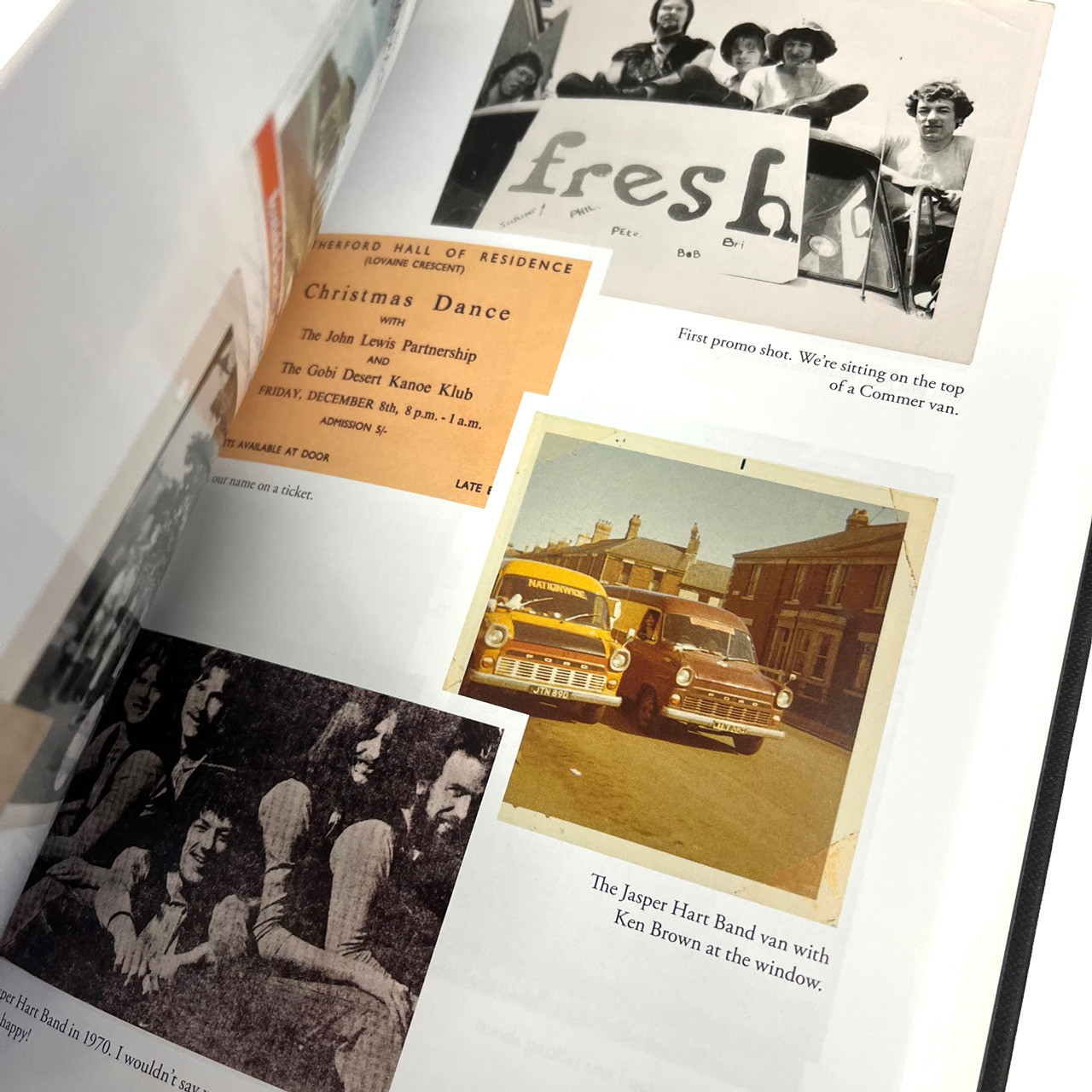 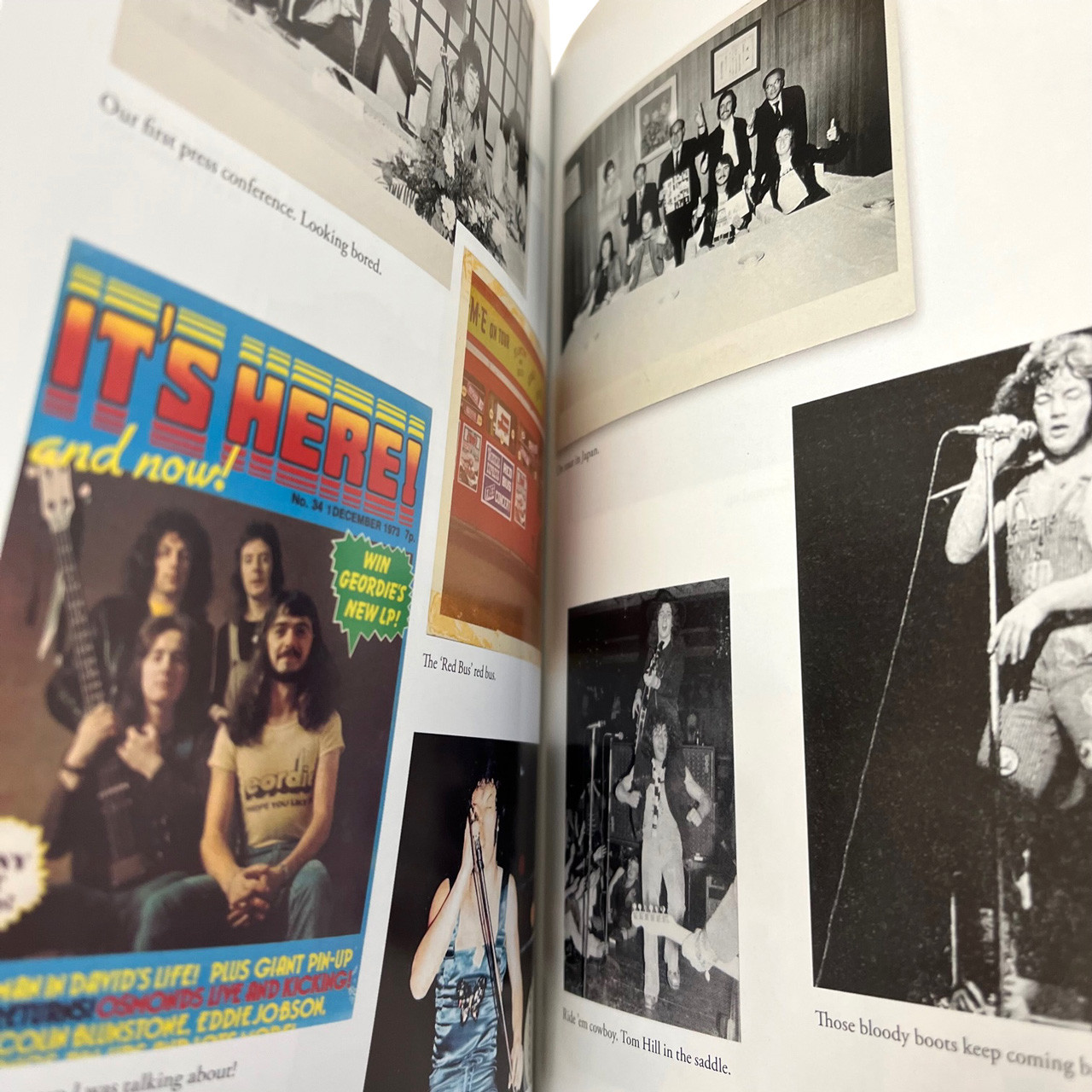 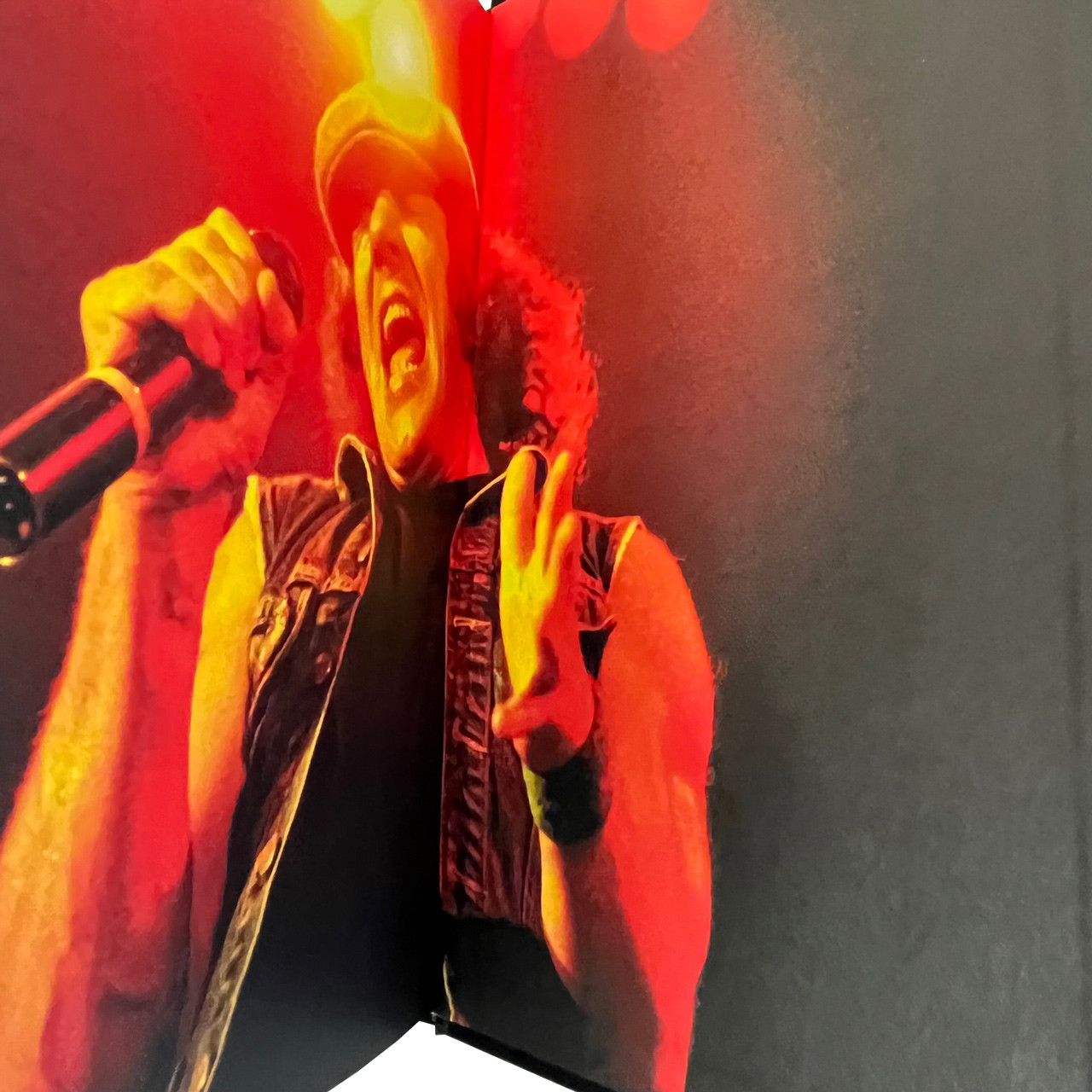 In this riotous, lovable memoir packed with outrageous stories, the iconic frontman of AC/DC shares his journey from County Durham choir boy to globally adored rock god, no holds barred.

Limited to only 25 UK Signed First Edition copies with numbered COA and numbered slipcase,  never to be offered again! 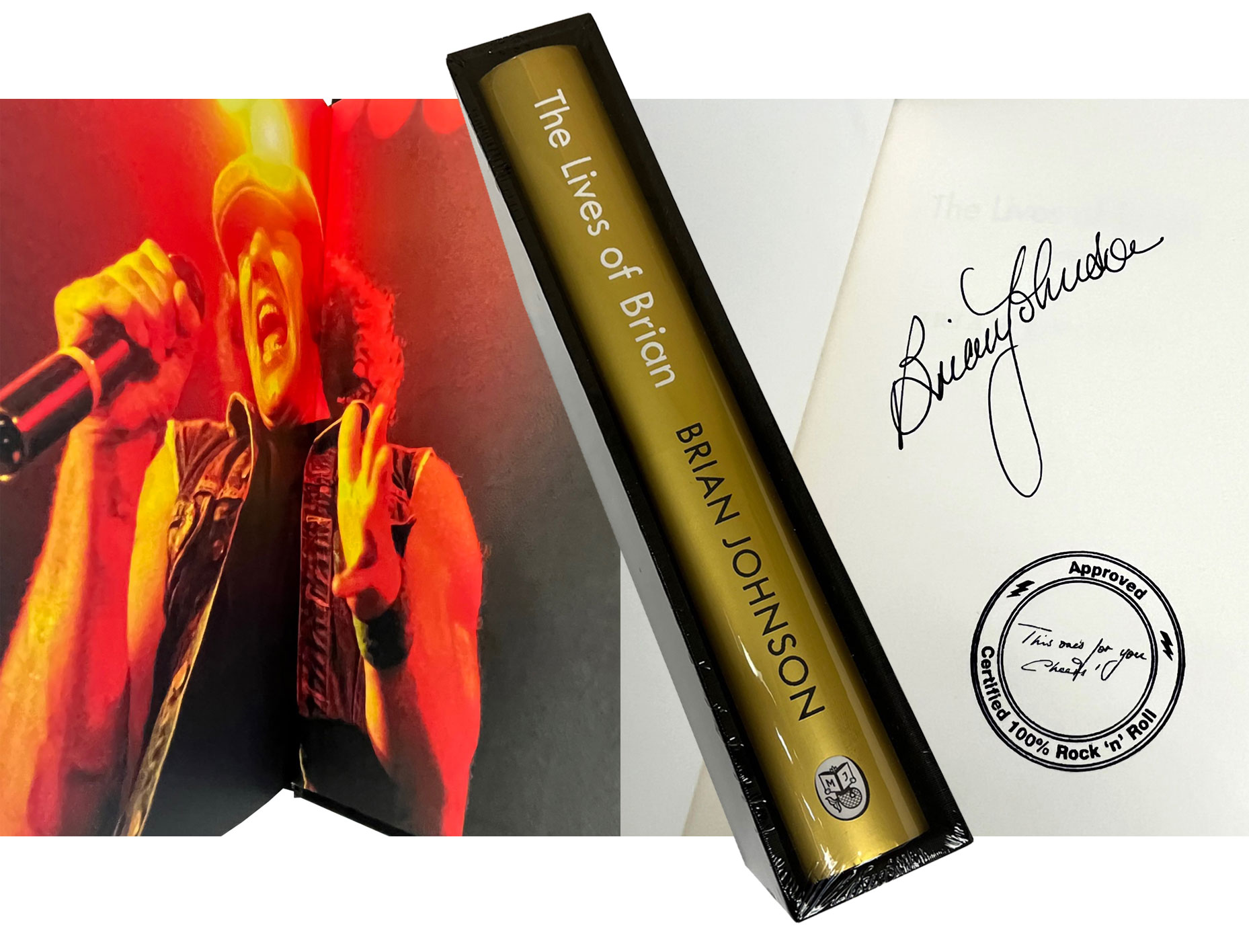 Penguin Random House UK 2022. Brian Johnson "The Lives of Brian". UK First Edition, First Printing as required on the copyright page. Signed collector's edition. This first edition has been personally signed by Brian Johnson directly onto the special page with the "Approved" certification stamp. Limited to only 25 slipcased copies with hand-numbered Certificate of Authenticity. Numbered slipcase to match the COA. As new, sealed without any flaws.

The slipcase is produced from Asahi Bookcloth imported from Japan. It adds a wonderful luxury to this special production, combining silk-like beauty with a beautiful sheen and texture.

"I’ve had some long nights and some great nights, bad days and a lot of good ones. I’ve gone from choirboy to rock ‘n’ roll singer, and now I’ve gone and written a bloody book about it…"

Personally signed by Brian Johnson directly into the book. No signed bookplates which were then affixed onto the page. Includes the original "Approved" autograph verification stamp. Limited to only 25 slipcased copies with hand-numbered COA.

The most collectible state of the publication by Penguin Random House UK.

You will receive a slip-cased UK FIRST EDITION, FIRST PRINTING with "First Published 2022" as stated on the copyright page with the number "1" below that. 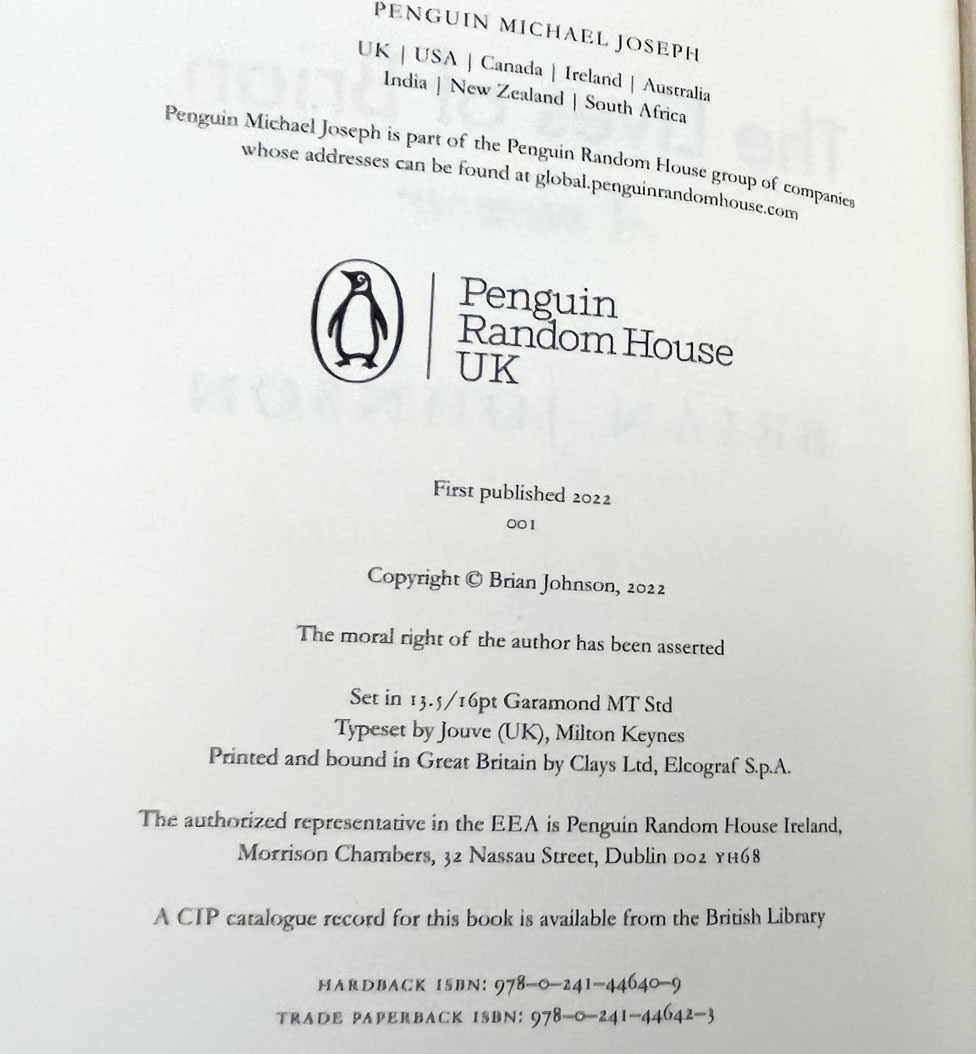 Brian Johnson’s memoir from growing up in a small town to starting his own band to ultimately replacing Bon Scott, the lead singer of one of the world biggest rock acts, AC/DC. They would record their first album together, the iconic Back in Black, which would become the biggest selling rock album of all time.

Brian Johnson was born to a steelworker and WWII veteran father and an Italian mother, growing up in New Castle Upon Tyne, England, a working-class town. He was musically inclined and sang with the church choir. By the early ’70s he performed with the glam rock band Geordie, and they had a couple hits, but it was tough going. So tough that by 1976, they disbanded and Brian turned to a blue-collar life.

Then 1980 changed everything. Bon Scott, the lead singer and lyricist of the Australian rock band AC/DC died at 33. The band auditioned singers, among them Johnson, whom Scott himself had seen perform and raved about. Within days, Johnson was in a studio with the band, working with founding members Angus and Malcolm Young, Cliff Williams, and Phil Rudd, along with producer Mutt Lange.

When the album, Back in Black, was released in July—a mere three months after Johnson had joined the band—it exploded, going on to sell 50 million copies worldwide, and triggering a years-long worldwide tour. It has been declared “the biggest selling hard rock album ever made” and “the best-selling heavy-metal album in history.”The band toured the world for a full year to support the album, changing the face of rock music—and Brian Johnson’s life—forever.

"I’ve had some long nights and some great nights, bad days and a lot of good ones. I’ve gone from choirboy to rock ‘n’ roll singer, and now I’ve gone and written a bloody book about it…"

Brian Francis Johnson (born 5 October 1947) is an English singer and songwriter. In 1980, after the death of Bon Scott, he became the third lead singer of the Australian rock band AC/DC. He and the rest of the band were inducted into the Rock and Roll Hall of Fame in 2003. In March 2016, he temporarily stepped away from the band during the Rock or Bust World Tour due to hearing problems. In September 2020, AC/DC officially confirmed that Johnson along with fellow band-mates Phil Rudd and Cliff Williams had returned in August 2018 to record the band’s 2020 album, Power Up.

Johnson was one of the founding members of the rock band Geordie formed in Newcastle upon Tyne in 1971. After a few hit singles, including UK Top 10 “All Because of You” (1973), the band split up in 1978. Following the death of Bon Scott on 19 February 1980, Johnson was asked to audition for AC/DC. AC/DC guitarists and founders Angus and Malcolm Young initially reached out to Brian remembering when Bon had been impressed with him after seeing him perform with Geordie. His first album with AC/DC, Back in Black, became the second-best-selling album of all time, according to most estimates. The Guardian ranked the successful transition to Johnson at No. 36 on their list of 50 key events in rock music history.

Johnson is known for his distinctive singing voice and strong Geordie accent. In July 2014, he was awarded an honorary degree of Doctor of Music by Northumbria University in the city of Newcastle in recognition of his significant contribution to the music industry. 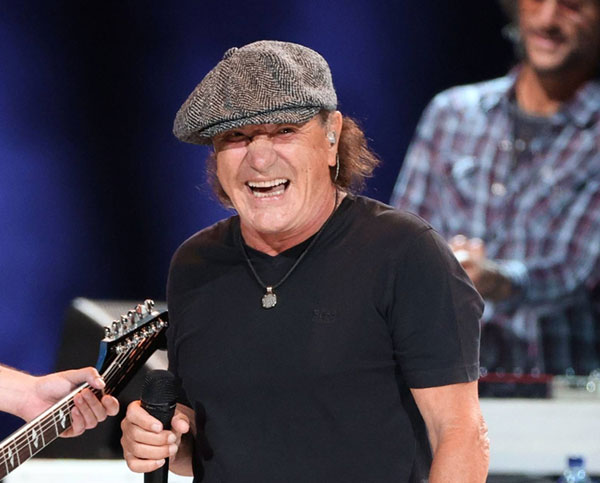 AC/DC (stylised as AC?DC) are an Australian rock band formed in Sydney in 1973 by Scottish-born brothers Malcolm and Angus Young.[1] Their music has been variously described as hard rock, blues rock, and heavy metal, but the band themselves call it simply “rock and roll”.

AC/DC underwent several line-up changes before releasing their first album, 1975’s High Voltage. Membership subsequently stabilised around the Young brothers, singer Bon Scott, drummer Phil Rudd, and bassist Mark Evans. Evans was fired from the band in 1977 and replaced by Cliff Williams, who has appeared on every AC/DC album since 1978’s Powerage. In February 1980, about seven months after the release of their breakthrough album Highway to Hell, Scott died of acute alcohol poisoning after a night of heavy drinking. AC/DC had initially considered disbanding, but at Scott’s family’s request, the remaining members opted to continue the band, bringing in longtime Geordie vocalist Brian Johnson as Scott’s replacement. Later that year, the band released their first album with Johnson, Back in Black, which was dedicated to Scott’s memory. The album launched AC/DC to new heights of success and became one of the best selling albums of all time.

The band’s eighth studio album, For Those About to Rock We Salute You (1981), was their first album to reach number one in the United States. Prior to the release of their next album, Flick of the Switch (1983), Rudd left the band and was replaced by Simon Wright, being in turn replaced by Chris Slade in 1989. The band experienced a commercial resurgence in the early nineties with the release of their twelfth studio album The Razors Edge (1990); it was their only album to feature Slade, who was replaced by the returning Rudd in 1994. Rudd has since recorded five more albums with the band, starting with, and including, Ballbreaker (1995). Their fifteenth studio album Black Ice was the second-highest-selling album of 2008, and their biggest chart hit since For Those About to Rock, eventually reaching No.1 worldwide.

The band’s line-up remained the same for twenty years, until 2014 with Malcolm Young’s retirement due to early-onset dementia (he died in 2017) and Rudd’s legal troubles. Malcolm was replaced by his nephew Stevie Young, who debuted on AC/DC’s 2014 album Rock or Bust, and on its accompanying tour, previous drummer Chris Slade filled in for Rudd. In 2016, Johnson was advised to stop touring due to worsening hearing loss. Guns N’ Roses frontman Axl Rose stepped in as the band’s vocalist for the remainder of that year’s dates. Long-term bass player and background vocalist Cliff Williams retired from AC/DC at the end of the Rock or Bust tour in 2016 and the group entered a four-year hiatus. A reunion of the Rock or Bust lineup was announced in September 2020 and the band’s seventeenth studio album Power Up was released two months later.

AC/DC have sold more than 200 million records worldwide, including 75 million albums in the United States, making them the ninth-highest-selling artist in the United States and the 16th-best-selling artist worldwide. Back in Black has sold an estimated 50 million units worldwide, making it the second-highest-selling album by any artist, and the highest-selling album by any band. The album has sold 25 million units in the US, where it is the fourth highest-selling album of all time. AC/DC were inducted into the Rock and Roll Hall of Fame on 10 March 2003. AC/DC ranked fourth on VH1’s list of the “100 Greatest Artists of Hard Rock” and were named the seventh “Greatest Heavy Metal Band of All Time” by MTV. In 2004, AC/DC ranked No. 72 on the Rolling Stone list of the “100 Greatest Artists of All Time”. Producer Rick Rubin, who wrote an essay on the band for the Rolling Stone list, referred to AC/DC as “the greatest rock and roll band of all time”. In 2010, VH1 ranked AC/DC number 23 in its list of the “100 Greatest Artists of All Time”. 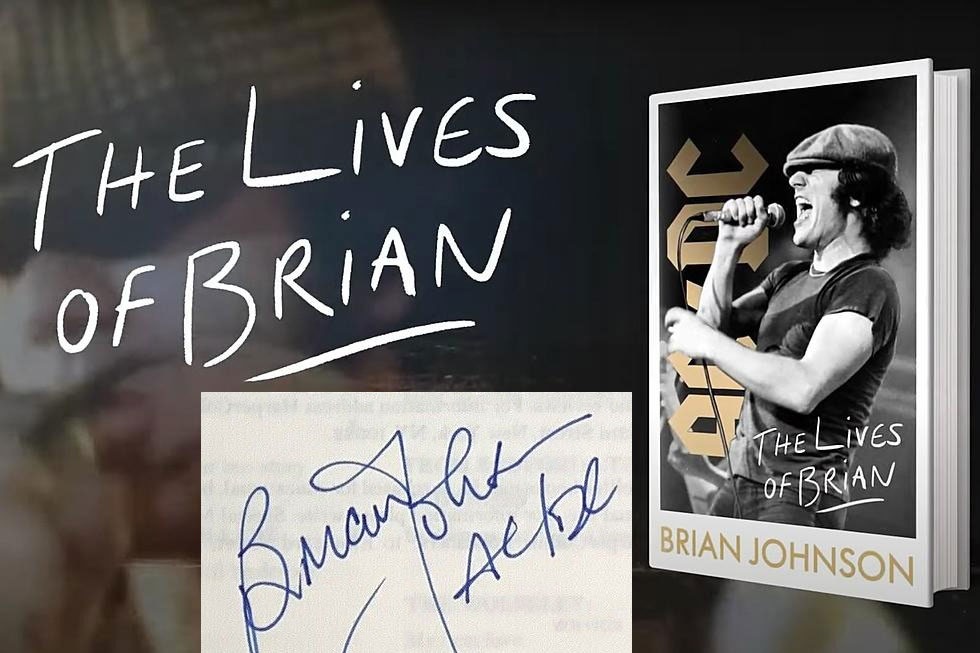 “A heart-filled novel about an iconic and persevering father and daughter.”—Time Personally signed by Taylor Jenkins Reid and Limited To only 500.Hutchinson Heinemann. August 30,...