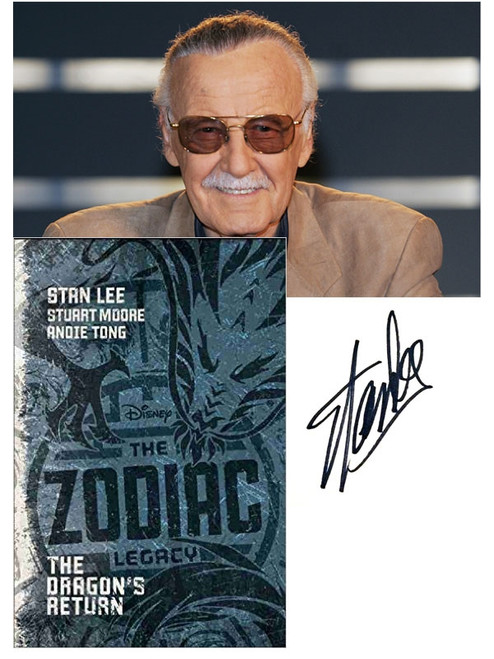 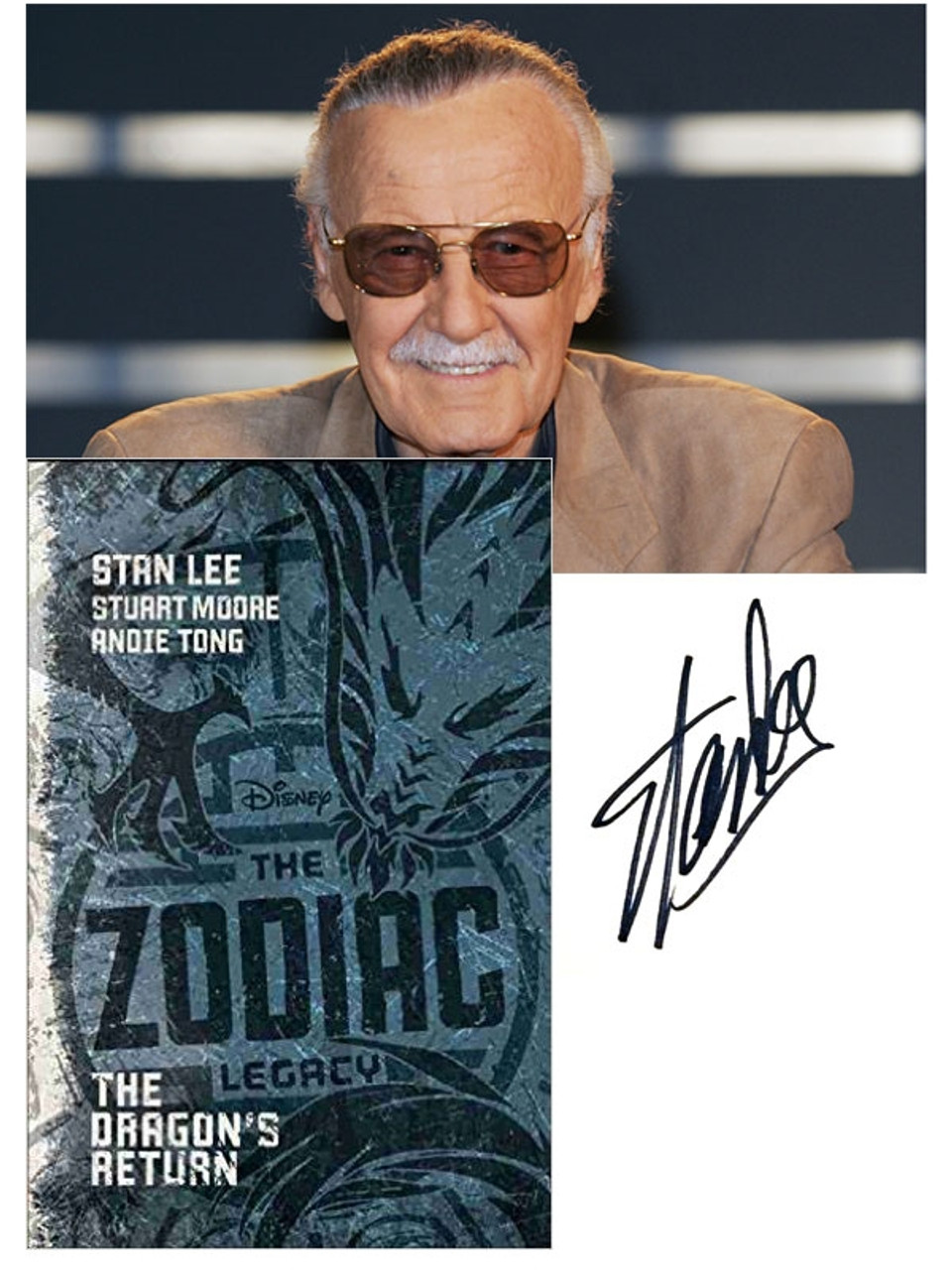 Personally signed by the comic book legend Stan Lee directly into the book.

Disney Press (Jan. 2016). Stan lee "The Zodiac Legacy: The Dragon's Return" Signed by the author directly into the book. A hardcover first edition with dust-jacket. 432 pages.

This book was obtained in person at the only book signing event held for this title release. The event was held on Jan. 30th of 2016 at the Barnes N Noble in Los Angeles, CA and was limited to only 300 tickets, which were quickly sold out. Only 300 people were able to obtain signed books for this title, which makes it a rare find.

In this second illustrated novel of The Zodiac Legacy series, the dangerous dragon power only grows stronger within Jasmine, and Steven struggles to hold their ragtag team together. But as alliances become strained, the line between the "good guys" and the "bad guys" becomes blurrier and blurrier. And it all culminates in a major cliffhanger that readers won't see coming!


Stan Lee is known to millions as the man whose Super Heroes propelled Marvel to its preeminent position in pop culture. His co-creations include Spider-Man, The Avengers, Iron Man, The Incredible Hulk, The Fantastic Four, as well as hundreds of others. He introduced Spider-Man as a syndicated newspaper strip that became the most successful of all syndicated adventure strips appearing in more than 500 newspapers worldwide. Stan currently remains Chairman Emeritus of Marvel, as well as a member of the Editorial Board of Marvel Comics. He is also the Chairman & Chief Creative officer of POW! Entertainment, a multimedia entertainment company based in Beverly Hills, CA.

Stuart Moore has been a writer, a book editor, and an award-winning comics editor. His recent writing includes Civil War, the first in a new line of prose novels from Marvel Comics, The Art of Iron Man 3 (Marvel, with Marie Javins); THE 99, a multicultural super hero comic from Teshkeel Media, and Disney Publishing Worldwide's John Carter: The Movie Novelization.

Andie Tong has worked on titles for various comic franchises, including Tron: Betrayal, Spectacular Spider-Man UK, The Batman Strikes, Smallville, Wheel of Time, TMNT, Masters of the Universe, and Starship Troopers, working for companies such as Disney, Marvel, DC Comics, Panini, Dark Horse, and Dynamite Entertainment, as well as commercial illustrations for numerous advertising agencies including Nike, Universal, CBS, Mattel, and Habsro. When he gets the chance, Andie concept designs for various companies, and also juggles illustration duties on a range of children's picture storybooks for Harper Collins. Malaysian born, Andie migrated to Australia at a young age, and then moved to London in 2005. In 2012, he journeyed back to Asia and currently resides in Singapore with this wife and two children.


Stan Lee (born Stanley Martin Lieber, December 28, 1922) is an American comic book writer, editor, publisher, media producer, television host, actor and former president and chairman of Marvel Comics. In collaboration with several artists, including Jack Kirby and Steve Ditko, he co-created Spider-Man, the Hulk, the Fantastic Four, Iron Man, Thor, the X-Men, and many other fictional characters, introducing complex, naturalistic characters and a thoroughly shared universe into superhero comic books. In addition, he headed the first major successful challenge to the industry's censorship organization, the Comics Code Authority, and forced it to reform its policies. Lee subsequently led the expansion of Marvel Comics from a small division of a publishing house to a large multimedia corporation.