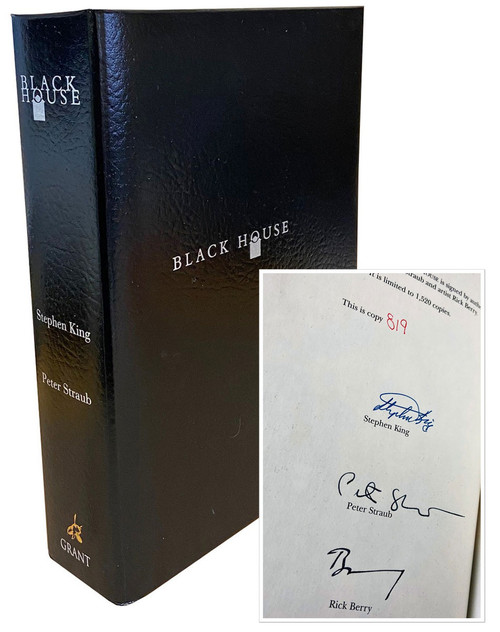 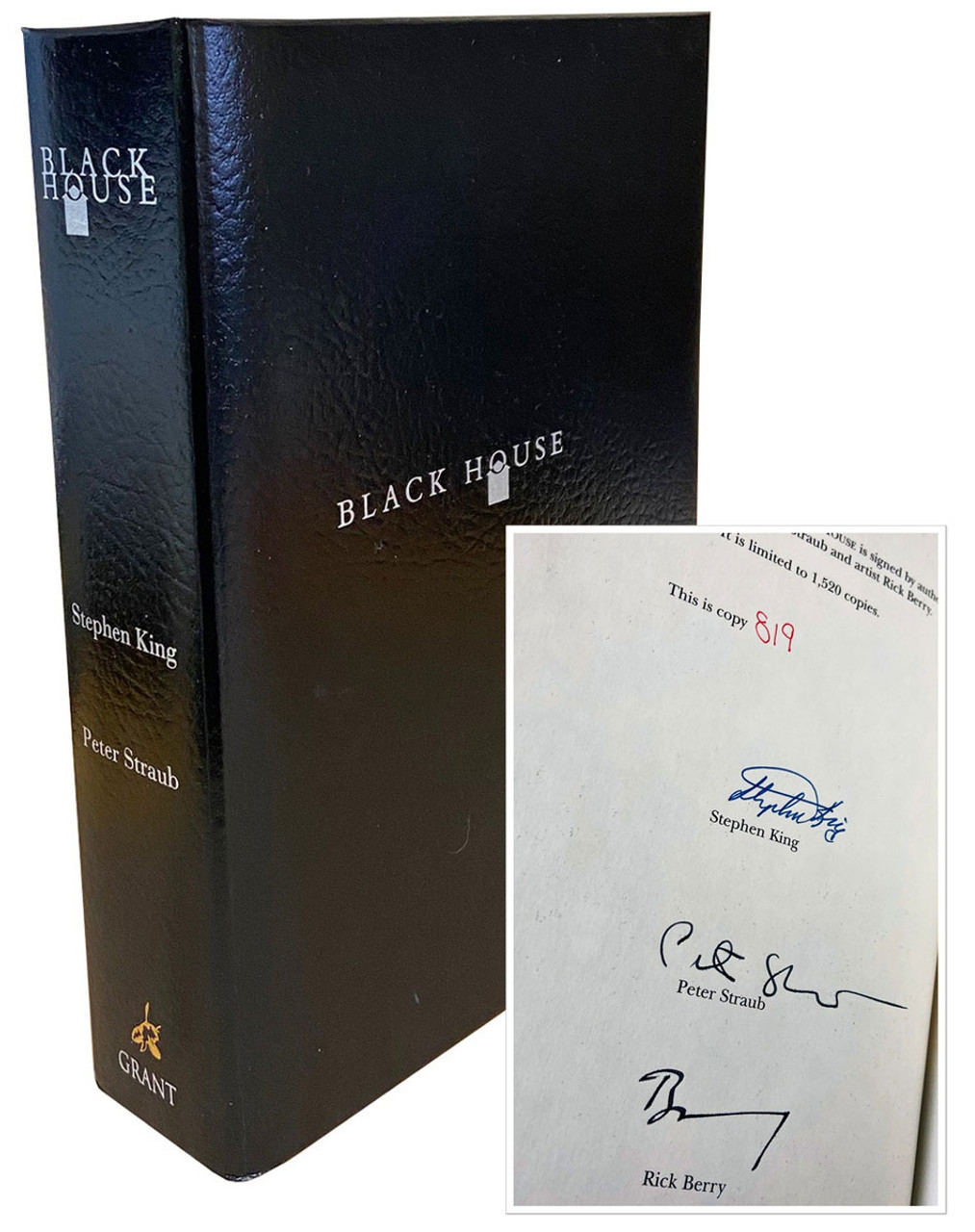 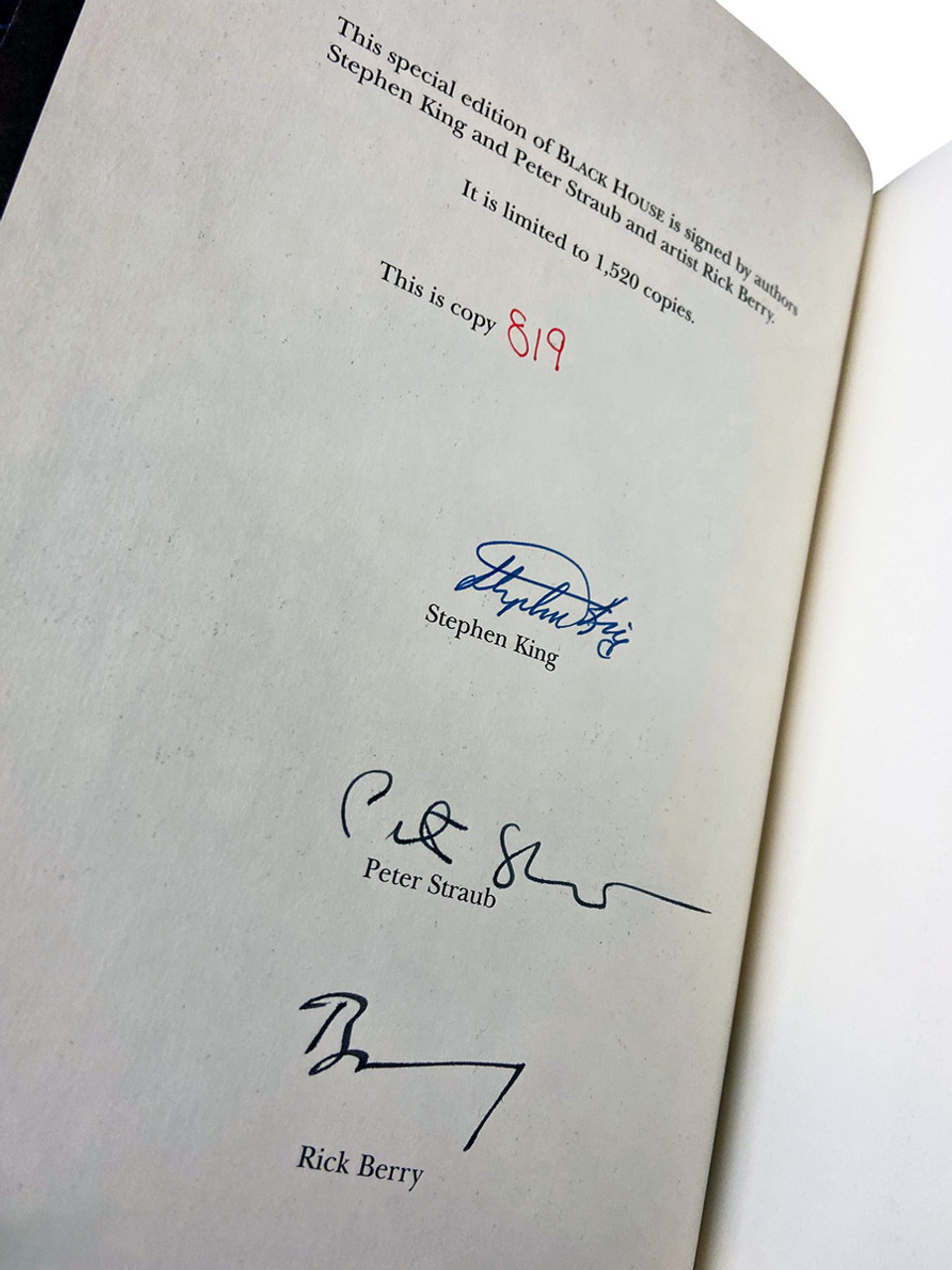 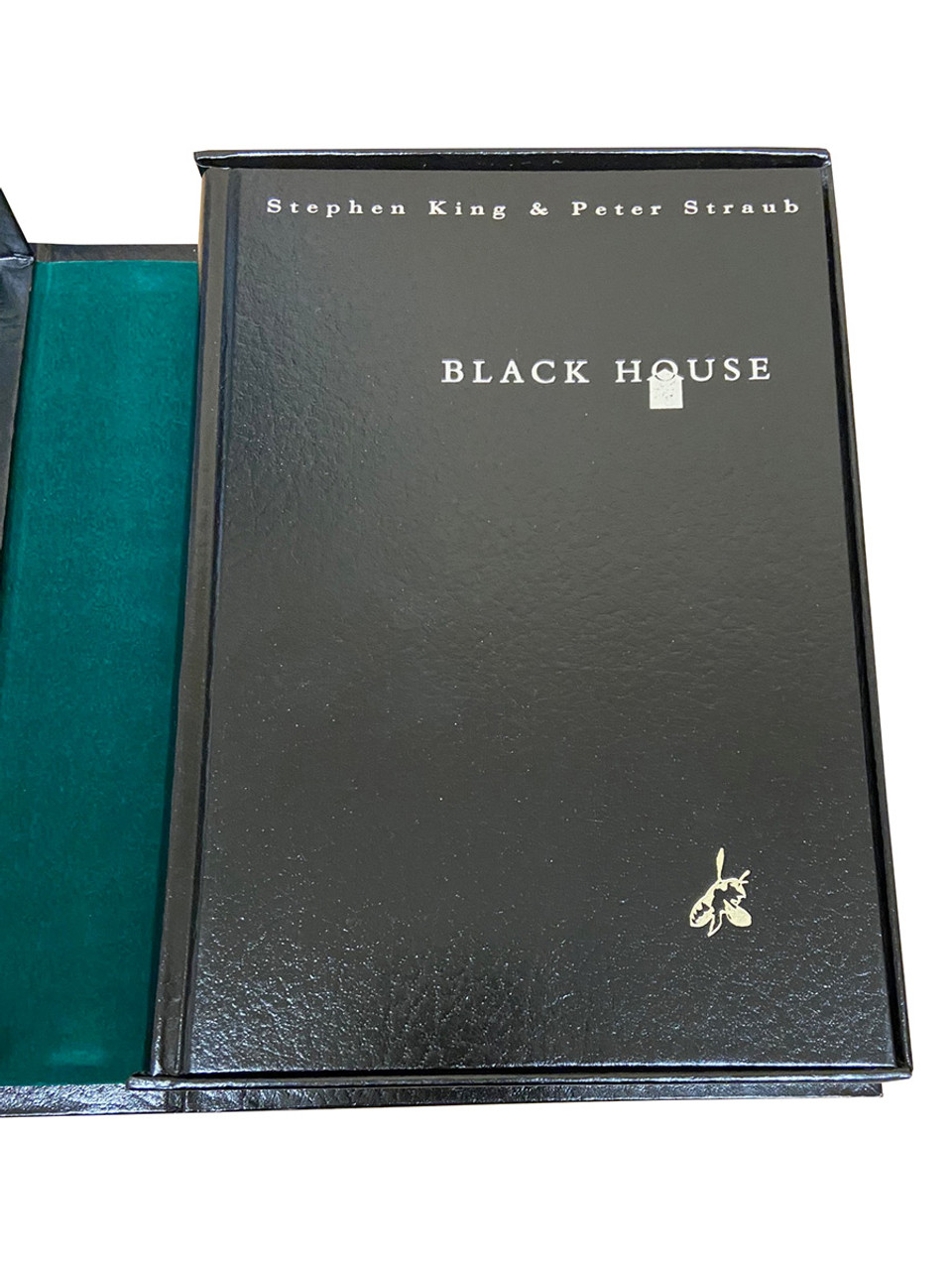 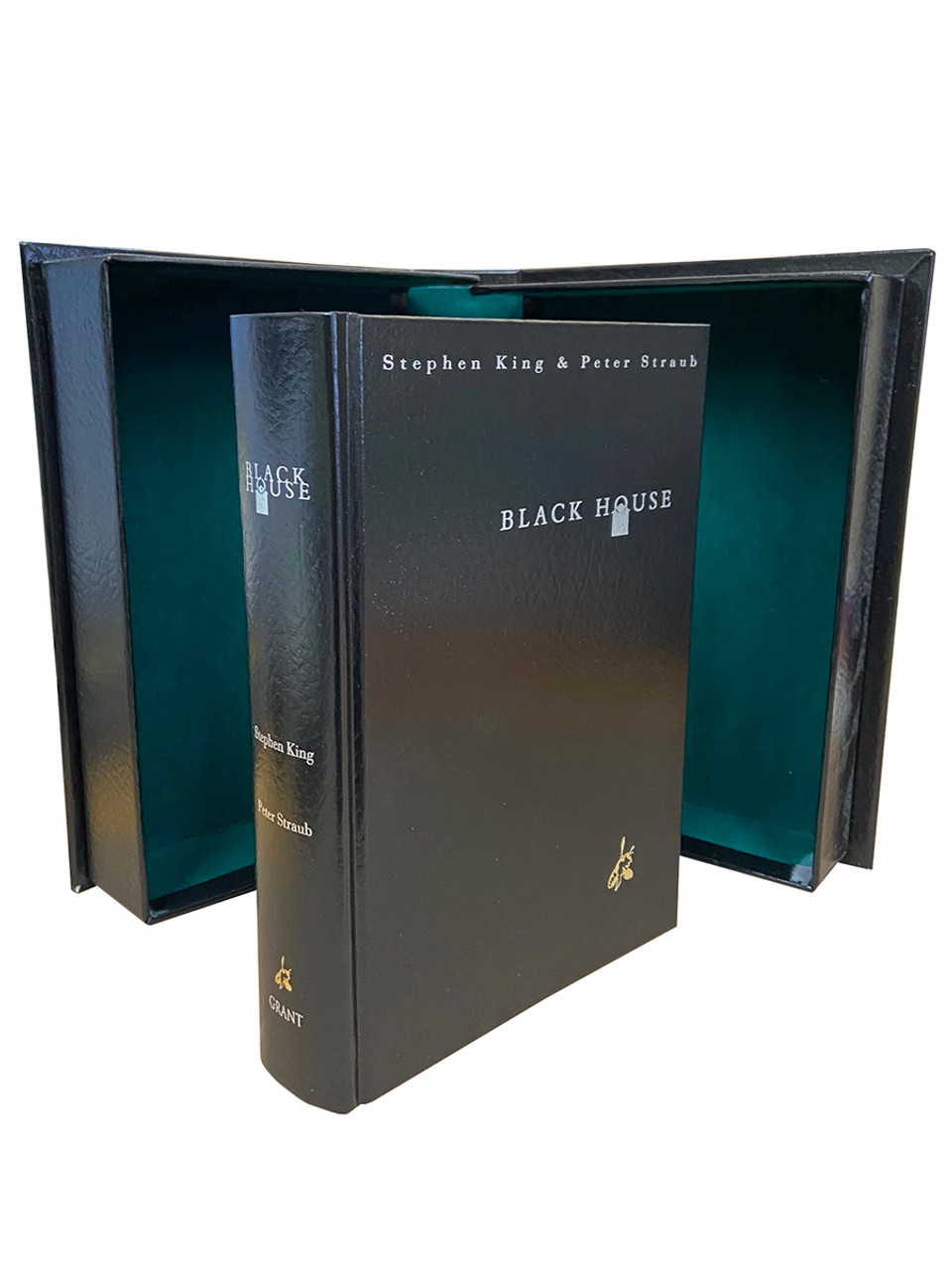 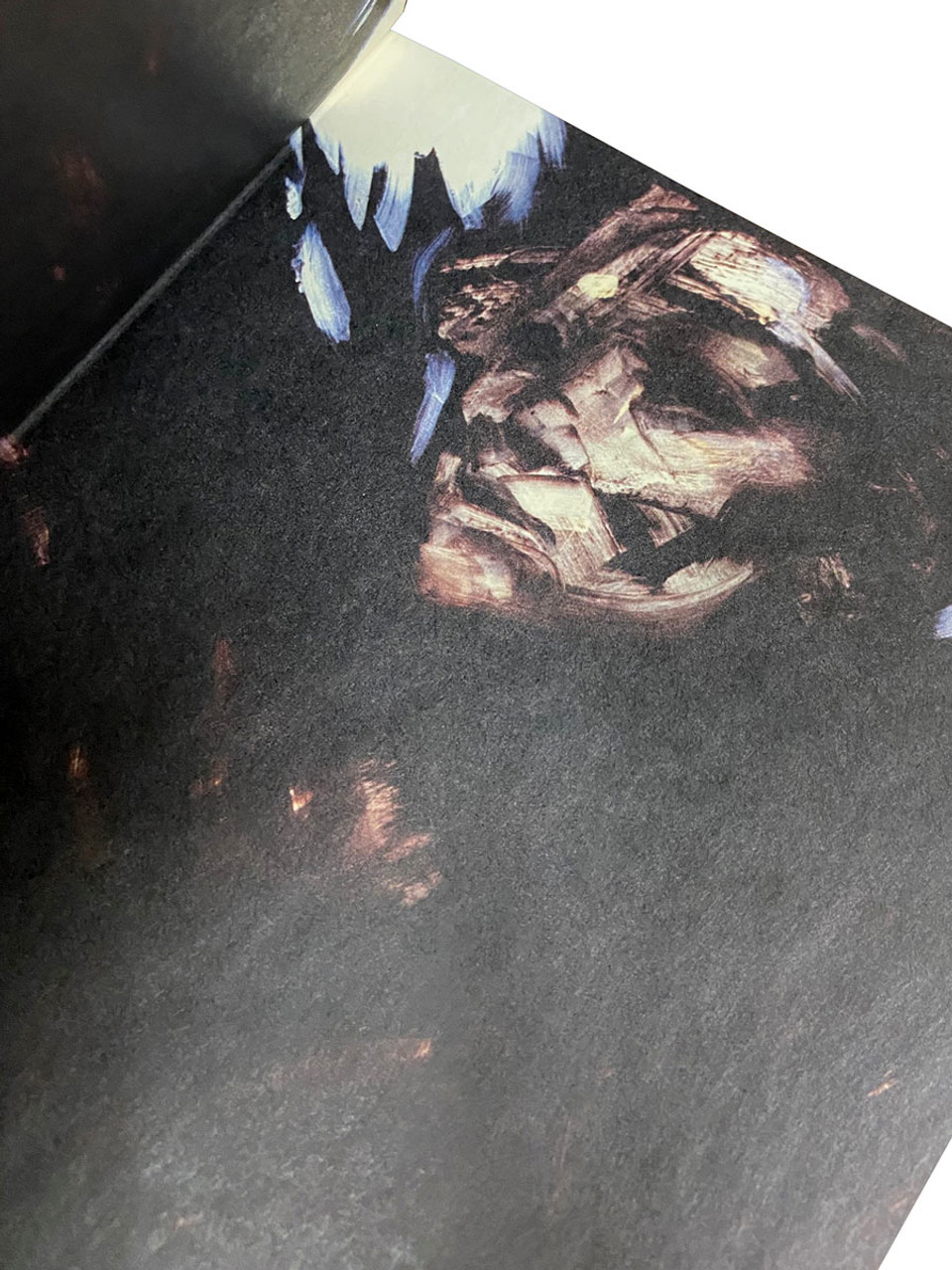 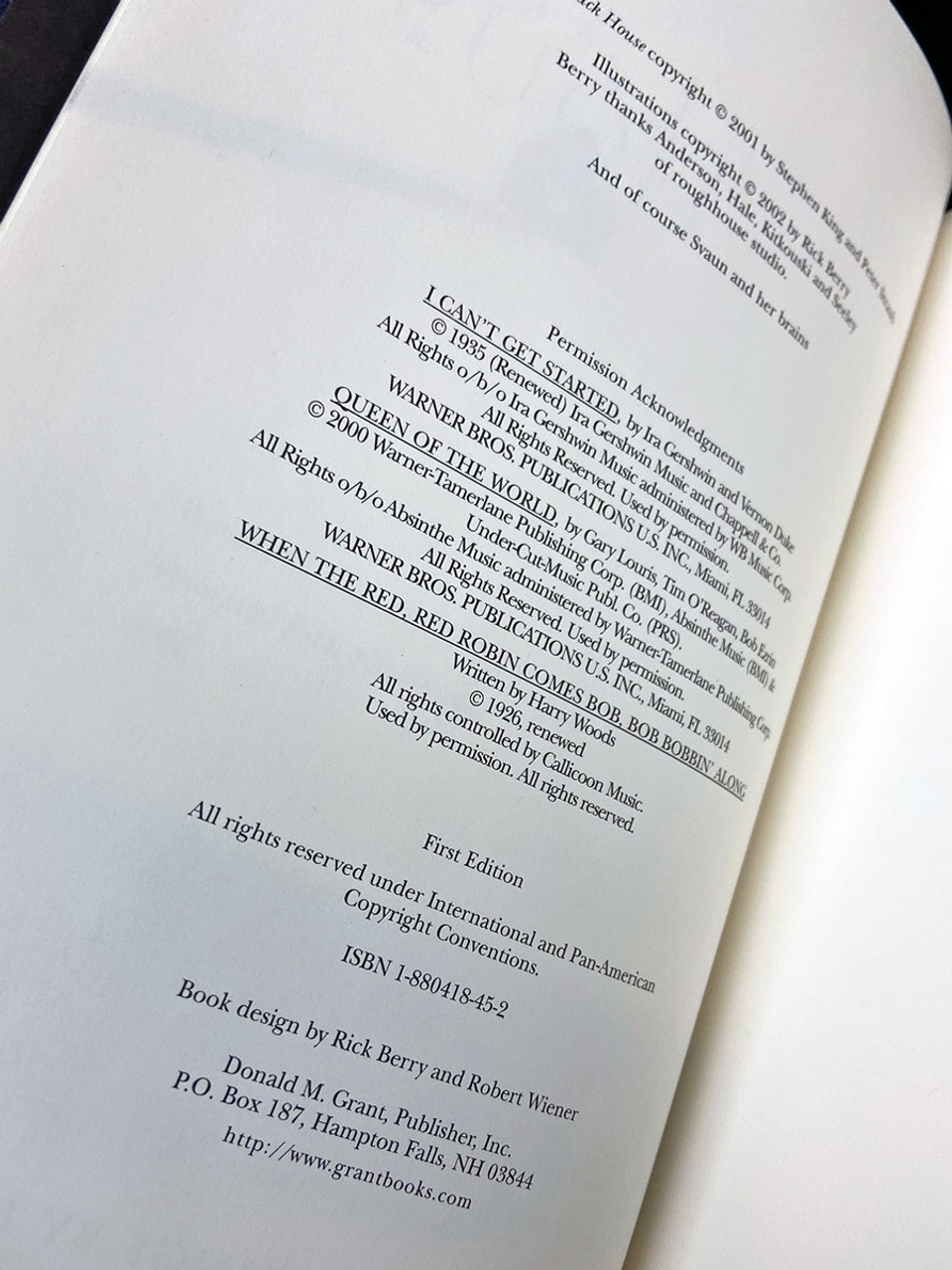 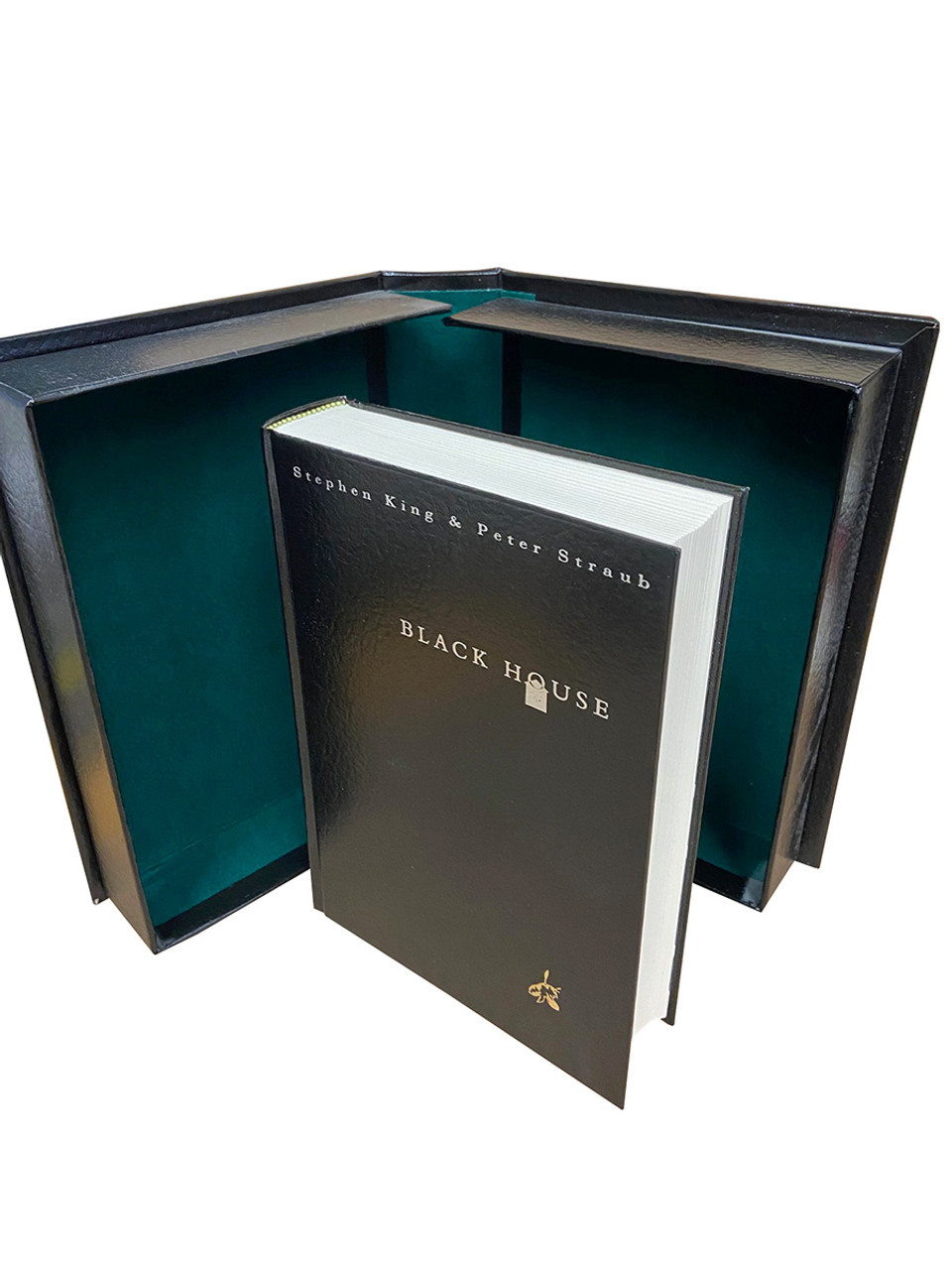 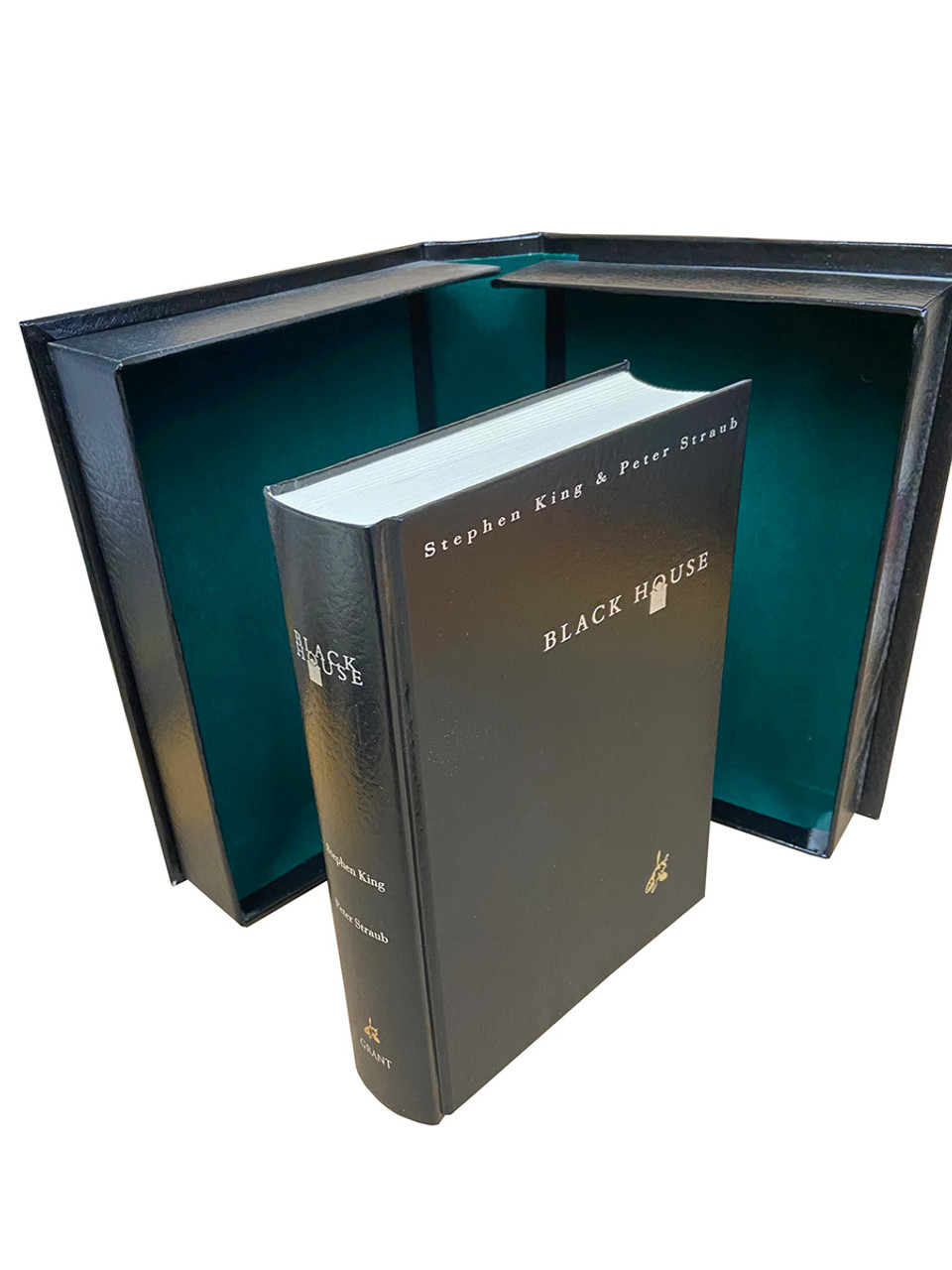 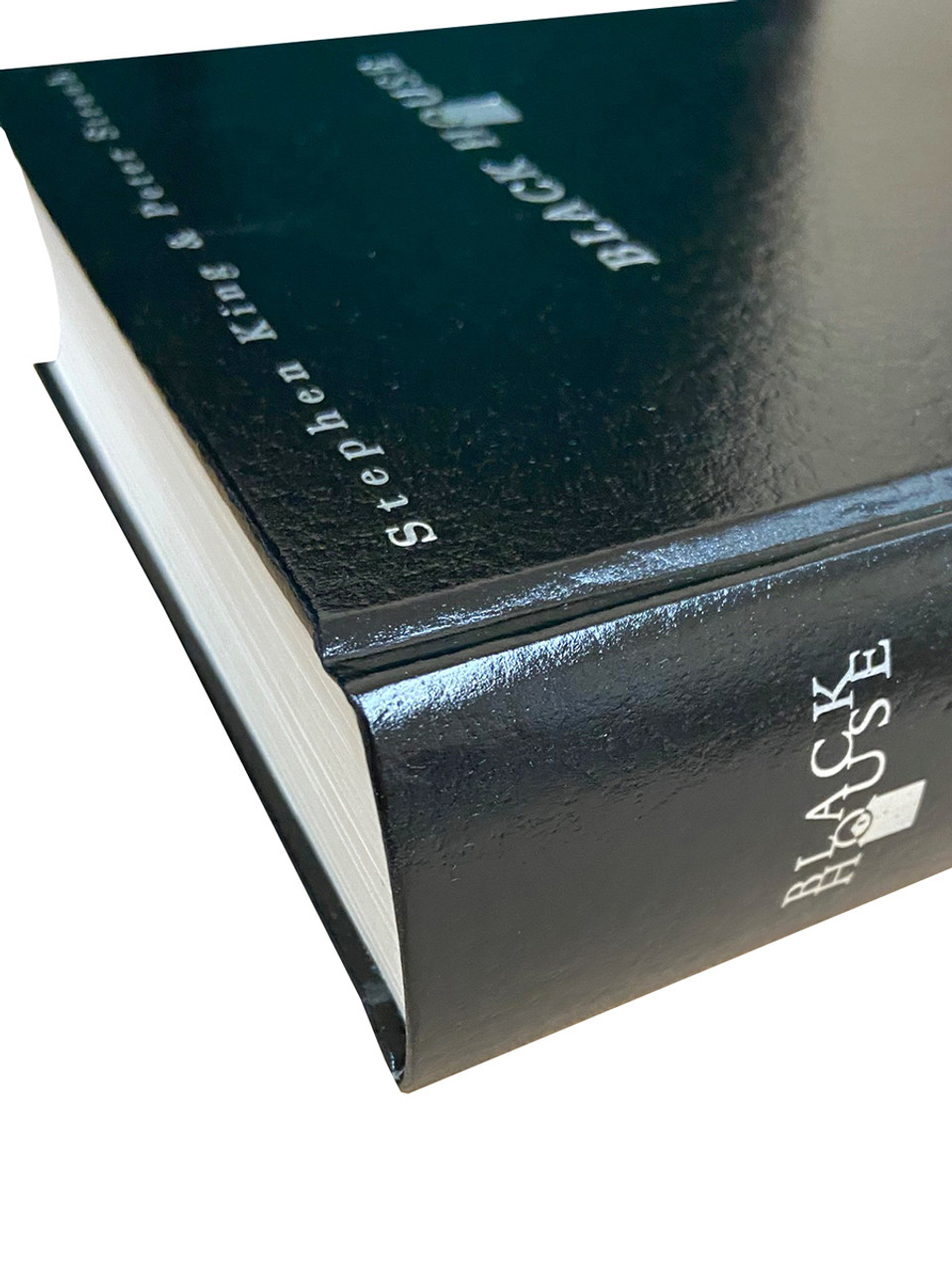 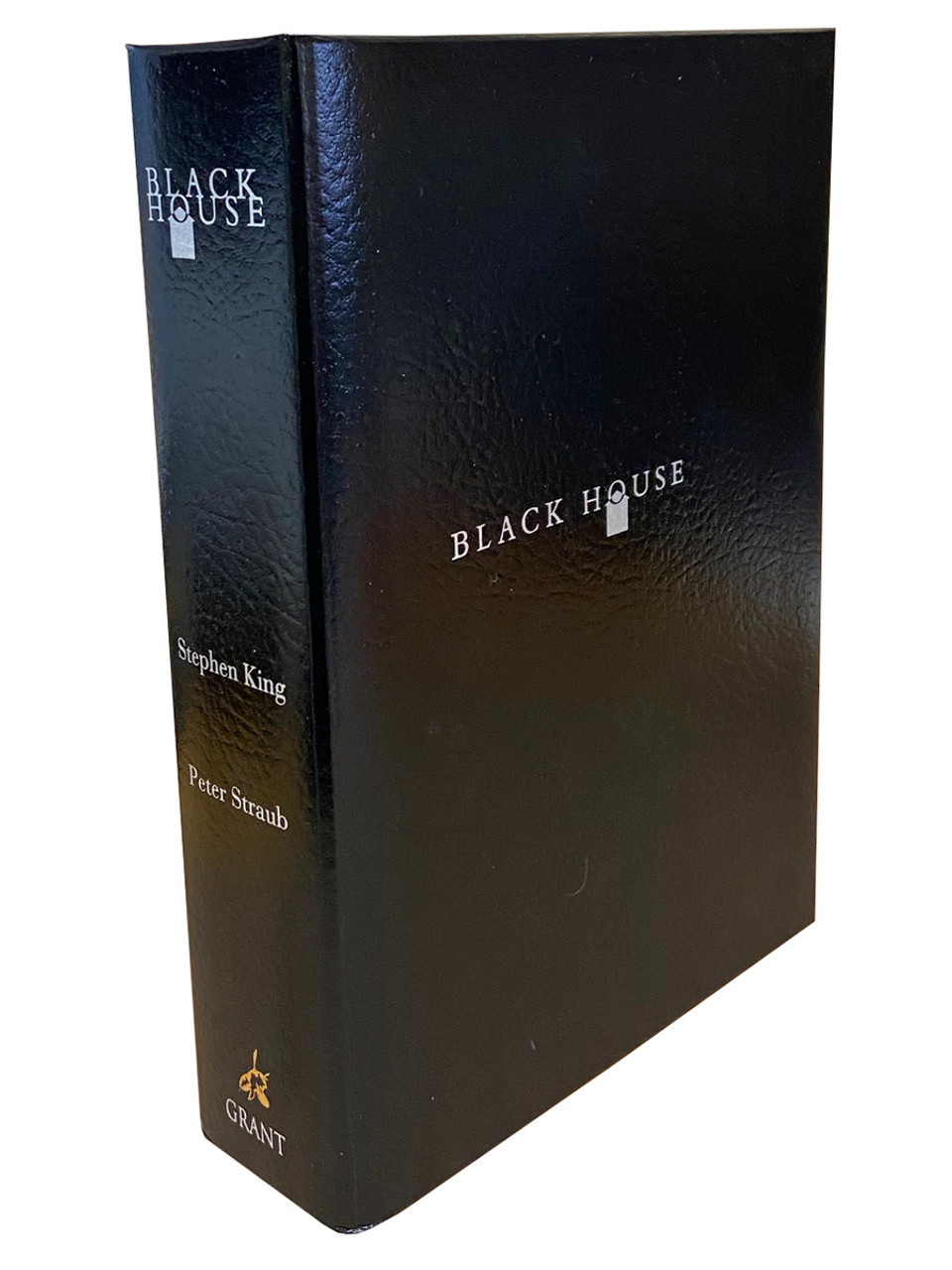 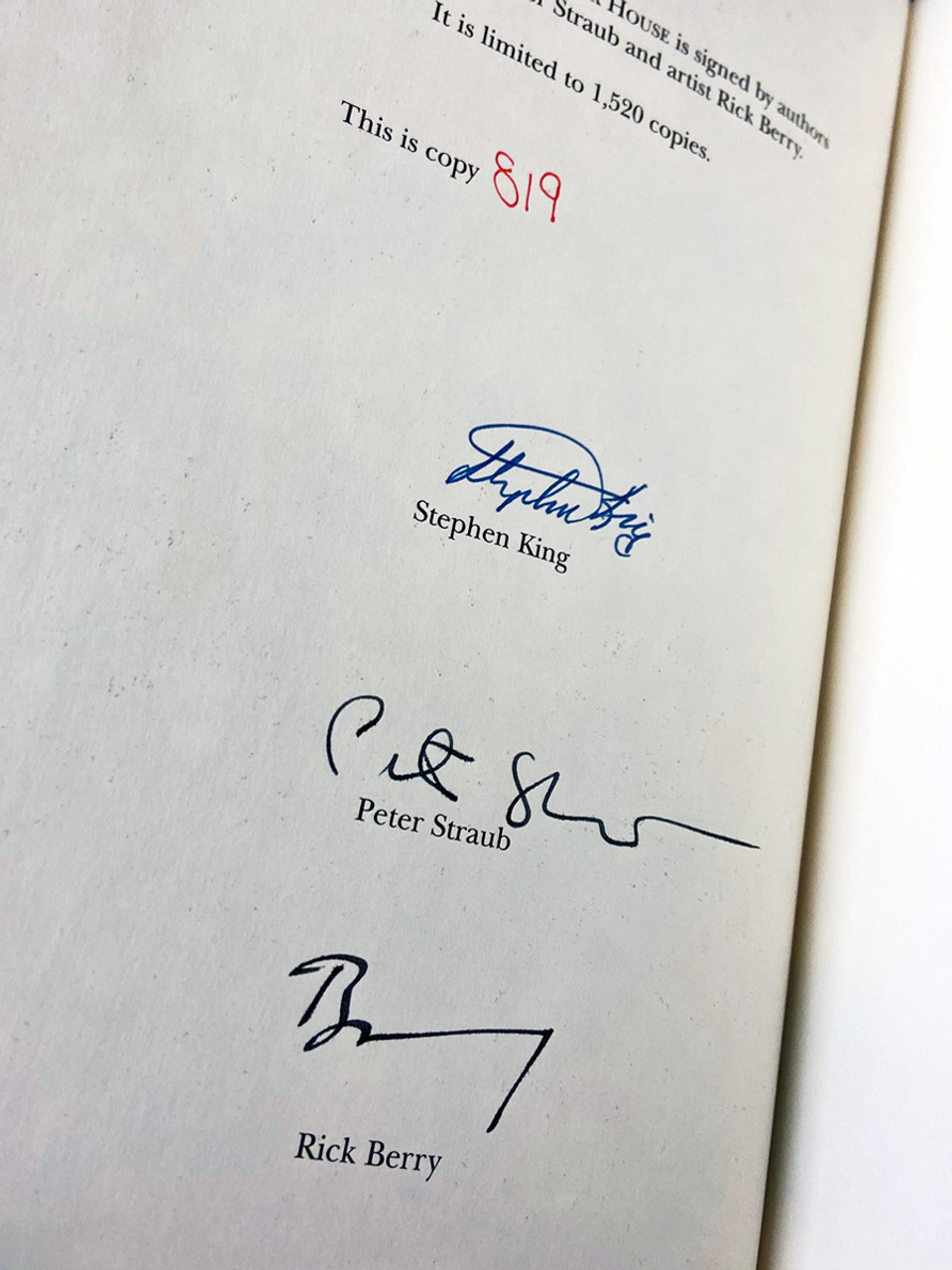 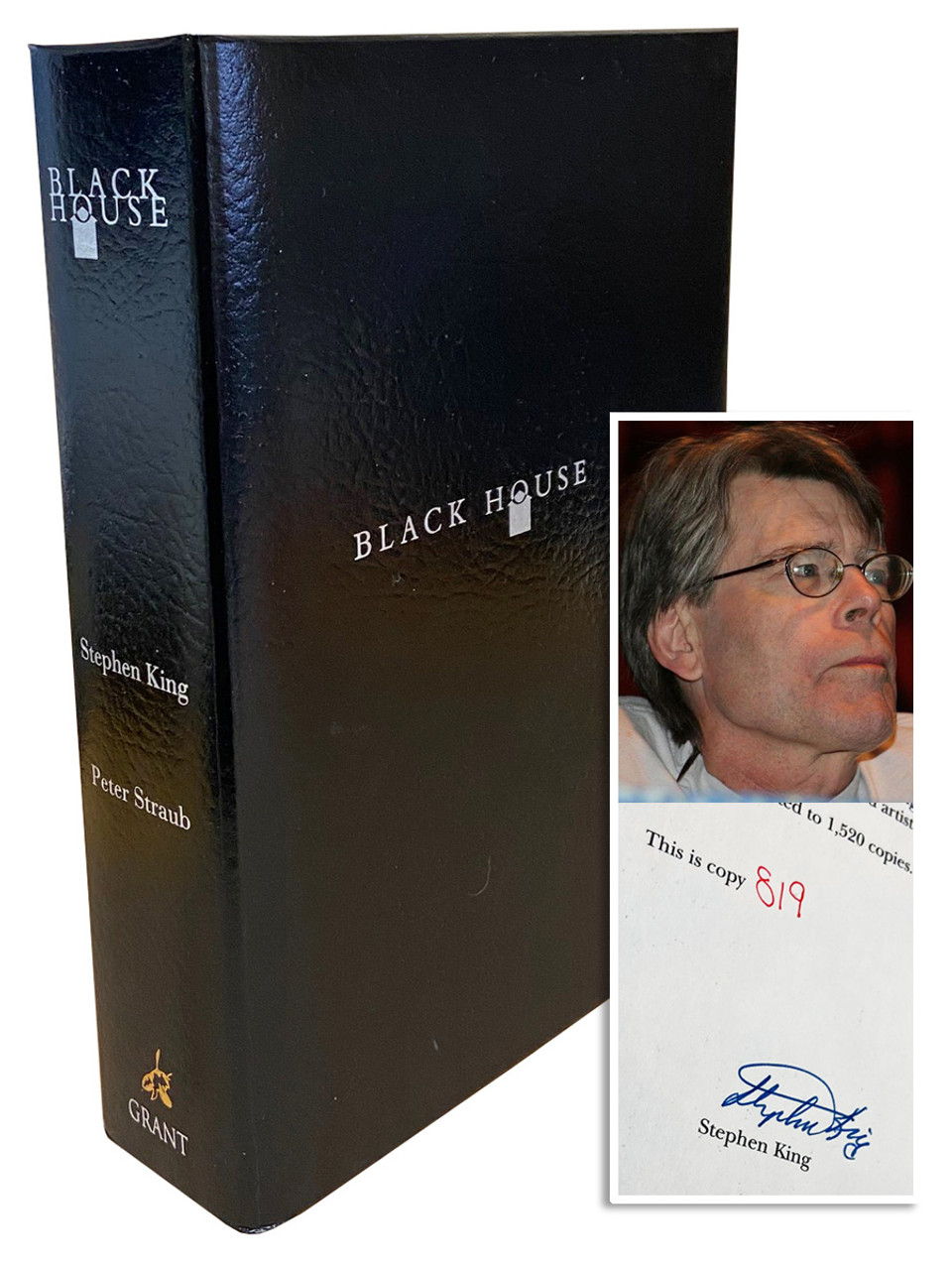 An ideal gift for the Stephen King collector of rare books, limited to only 1,520 signed & numbered copies.

Black House is a horror novel by American writers Stephen King and Peter Straub. Published in 2001, it is the sequel to The Talisman. This is one of King's numerous novels, which also include Hearts in Atlantis and Insomnia, that tie in with the Dark Tower series. Black House was nominated to the Bram Stoker Award for Best Novel.

The novel is set in Straub's homeland of Wisconsin, rather than in King's frequently used backdrop of Maine. The town of "French Landing" is a fictionalized version of the town of Lacrosse County, Wisconsin. Also, "Centralia" is named after the nearby small town of Centerville, Wisconsin, located at the intersection of Hwy 93 and Hwy 35.

A chapter of the book is written around Edgar Allan Poe's poem "The Raven".

It's to blighted End-World, via the portal of the Black House - a creepy local house painted black - that Jack and others travel to rescue Ty, in the novel's frantic conclusion.The book abounds with literary allusions, many to the King-verse, and readers not familiar with King's work and particularly with The Talisman may feel disoriented, especially at first. But there's so much here to revel in, from expertly executed sequences of terror, awe or passion, the novel is a deep reservoir of genuine emotion to some of the most wonderful characters to spring from a page in years, to a story whose energy is so high and craft so accomplished that most readers will wish it ran twice its great length. What is probably the most anticipated novel of the year turns out to be its most memorable to date, a high point in both the King and Straub canons. This will be a monster bestseller, and deservedly so. 2 million first printing. (One-day laydown Sept. 15)

Peter Francis Straub is an American novelist and poet. He has written numerous horror and supernatural fiction novels, including Julia and Ghost Story, as well as The Talisman, which he co-wrote with Stephen King. Straub has received such literary honors as the Bram Stoker Award, World Fantasy Award, and International Horror Guild Award. 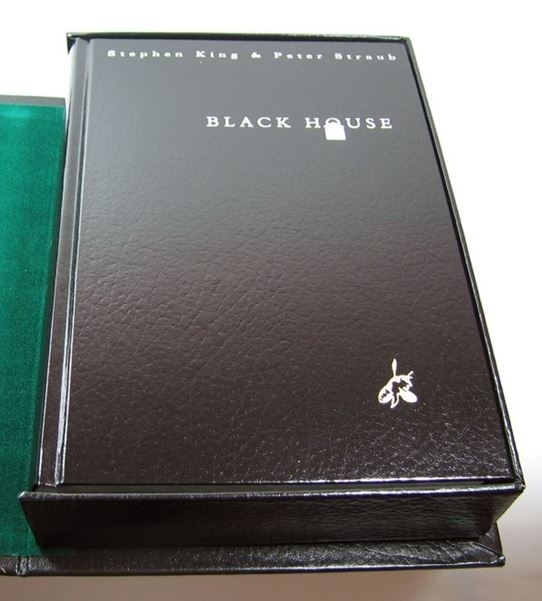 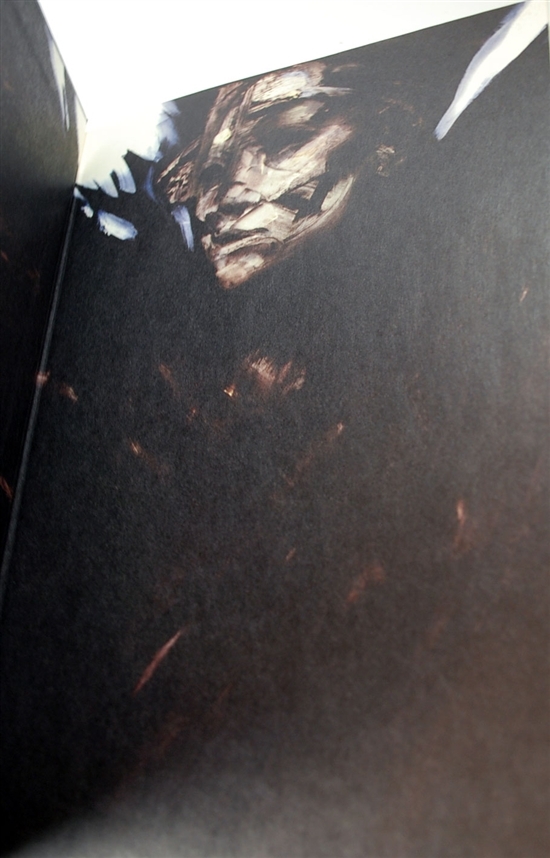 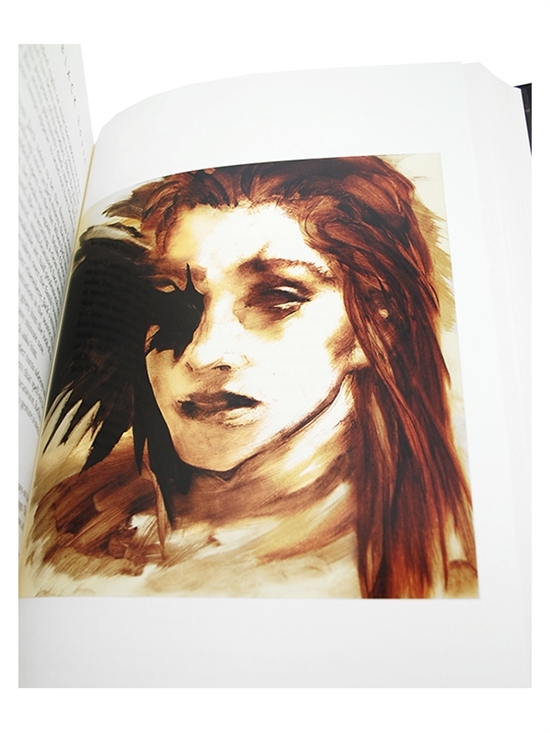 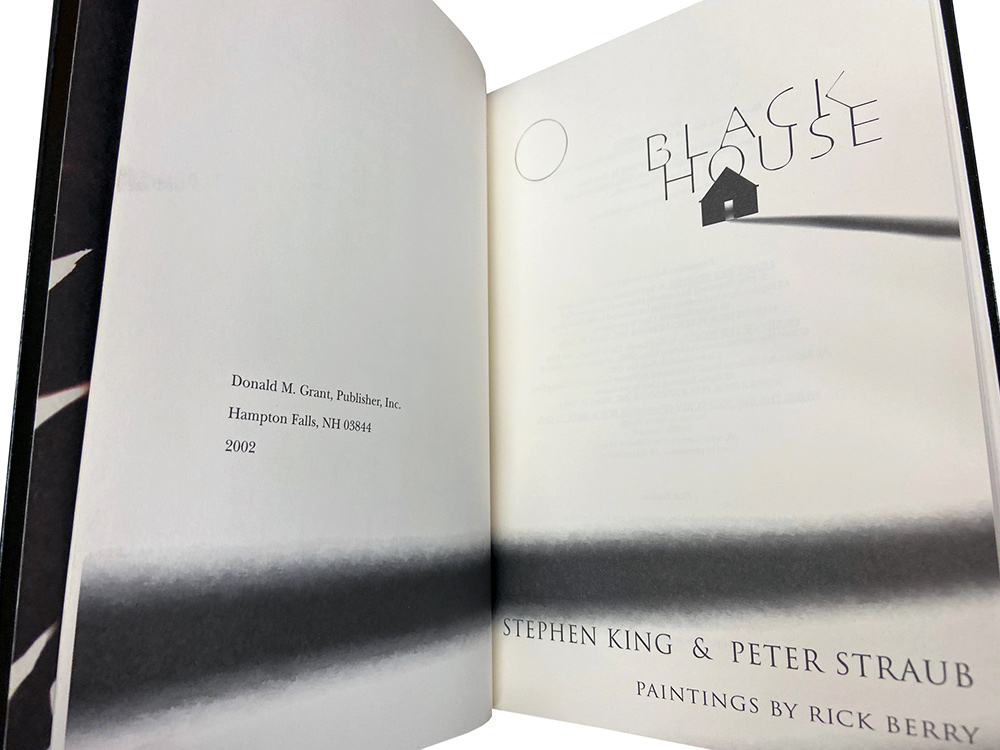 A beautiful black leather edition produced in a green velvet-lined, leather tray-case. Limited First Edition. Signed by the authors Stephen King, Peter Straub & Rick Berry, the illustrator. In As New condition with tray case the same. First Edition. Full-Leather in tray case. Illustrations by Rick Berry.
VERY FINE GUARANTEED. Unread book with square and tight spine. Sharp corners. The condition is of the highest quality. A wonderful bright clean copy. Free of markings, writings, or stamps. No attached bookplates or indication of any removed. Traycase is also in New condition.