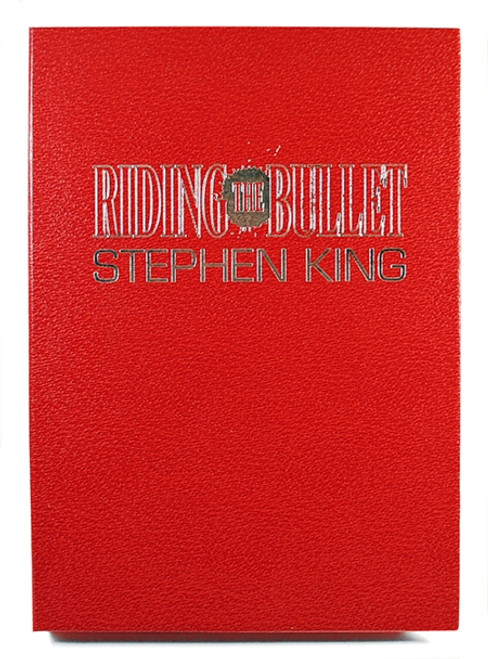 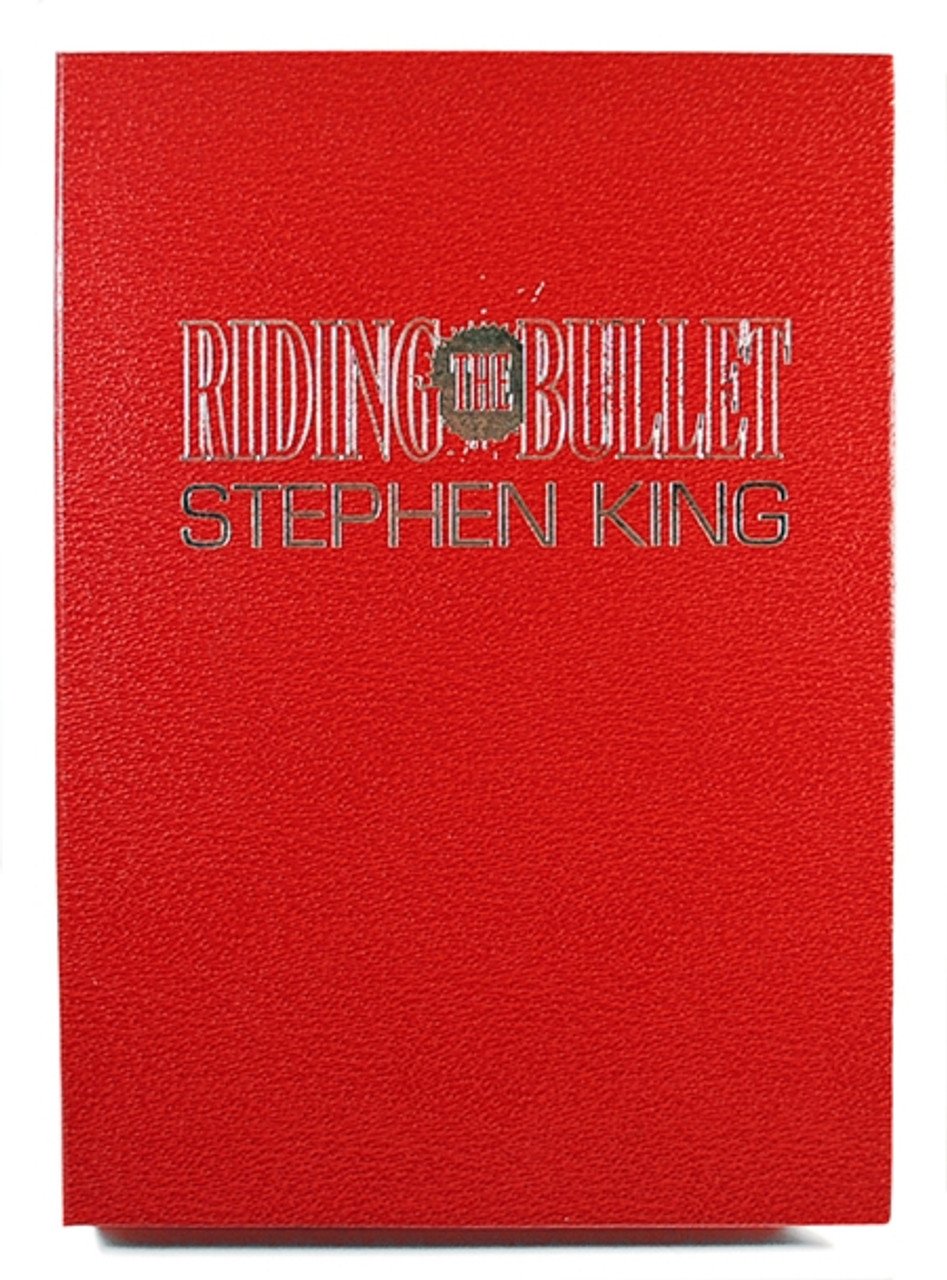 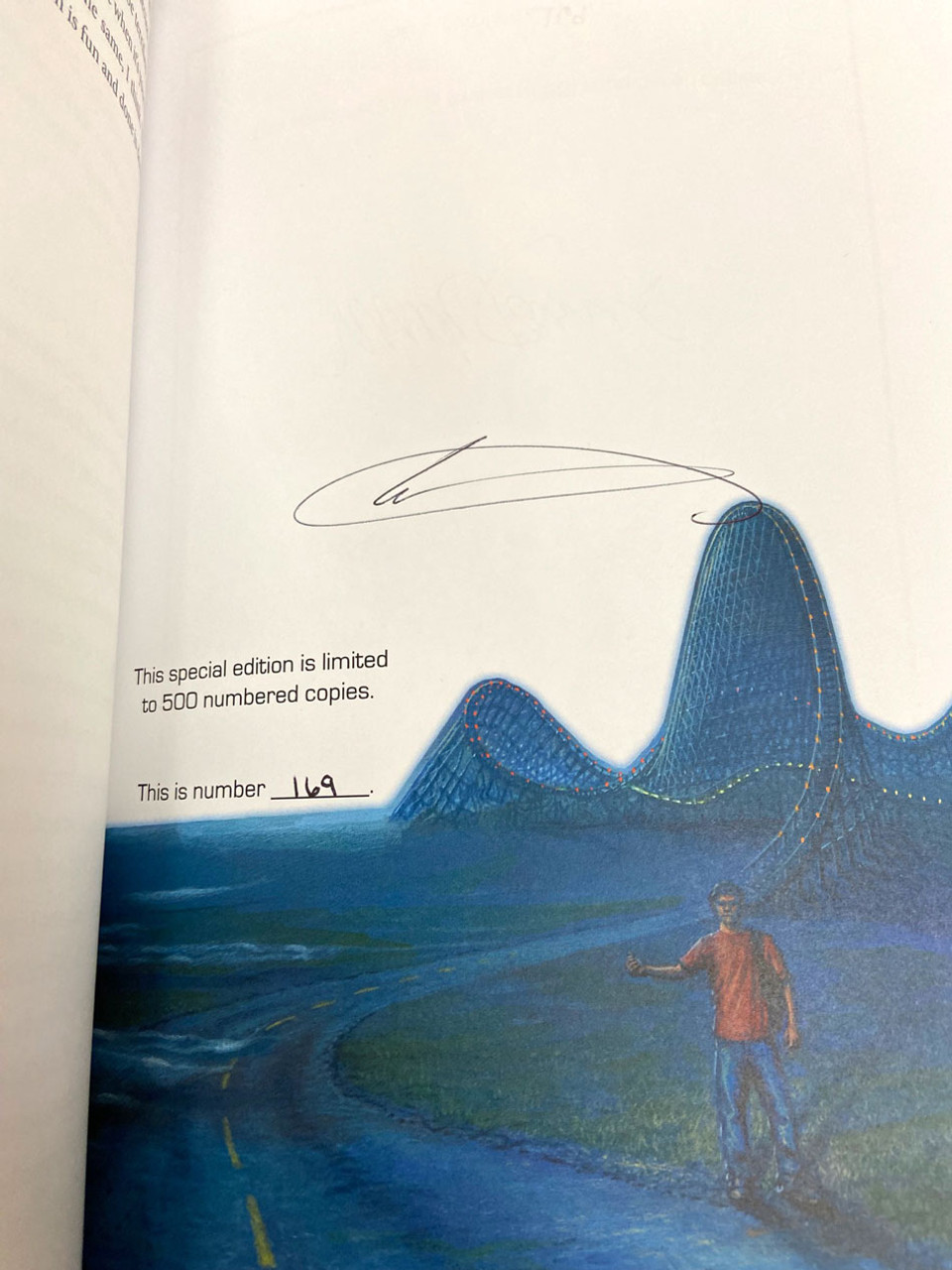 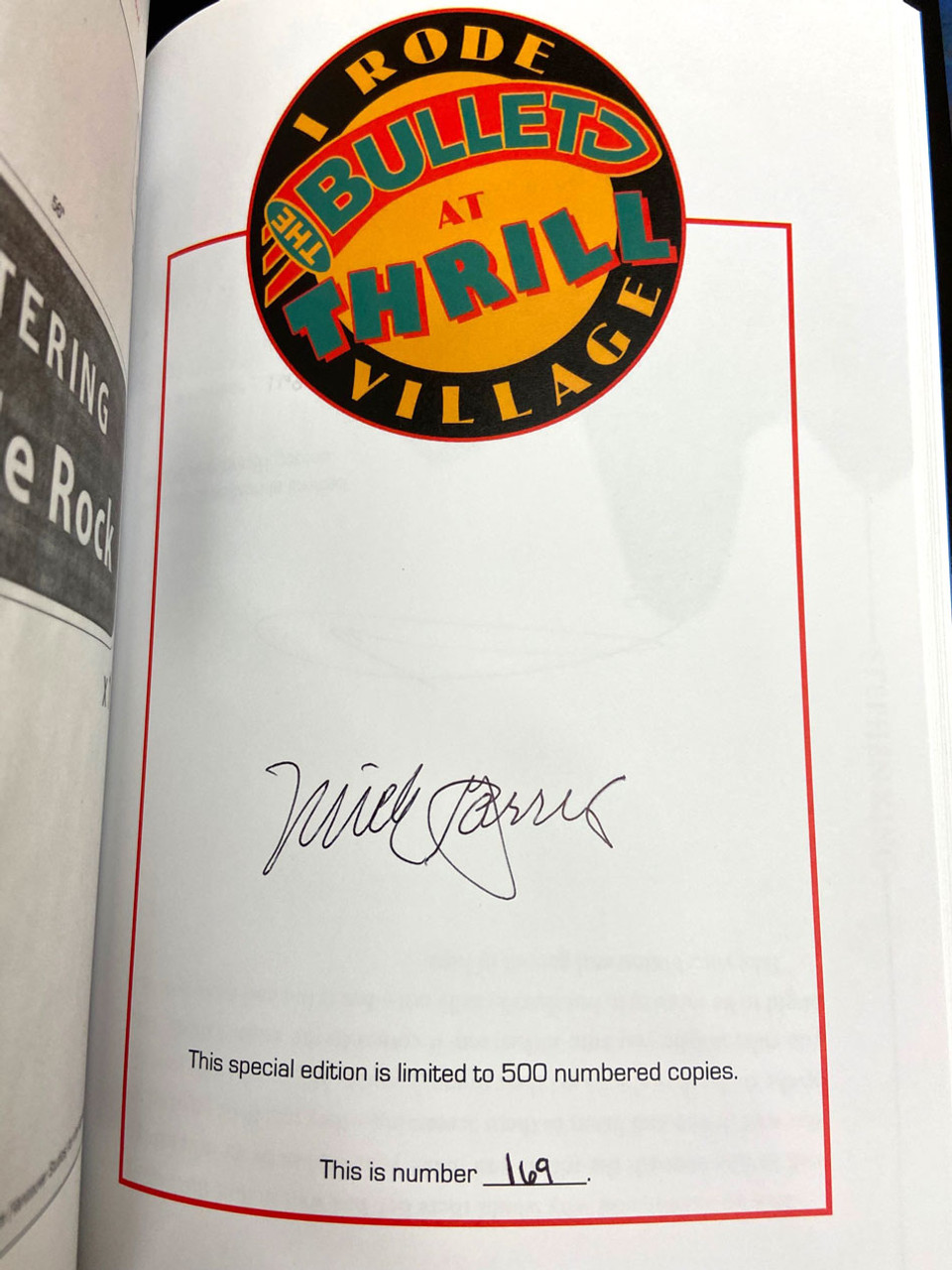 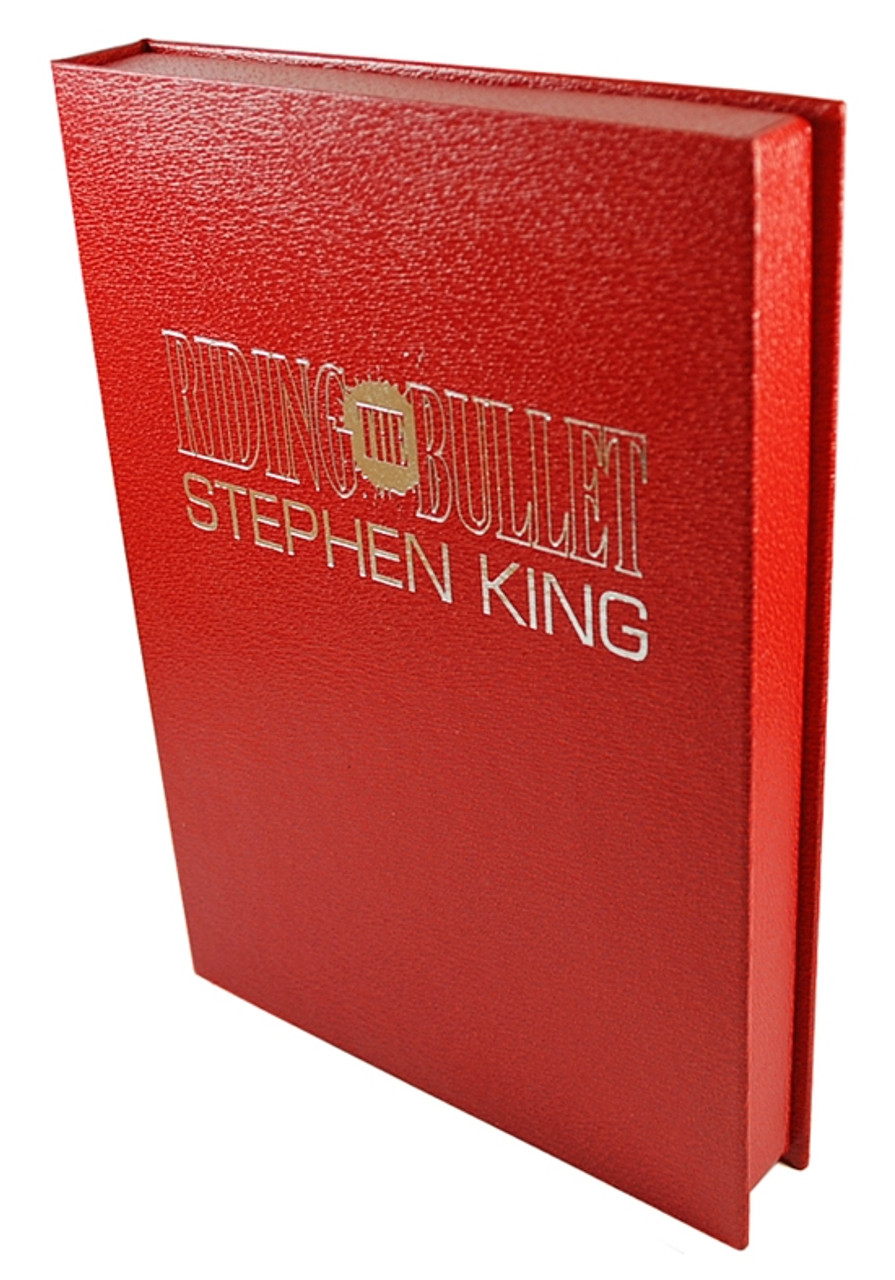 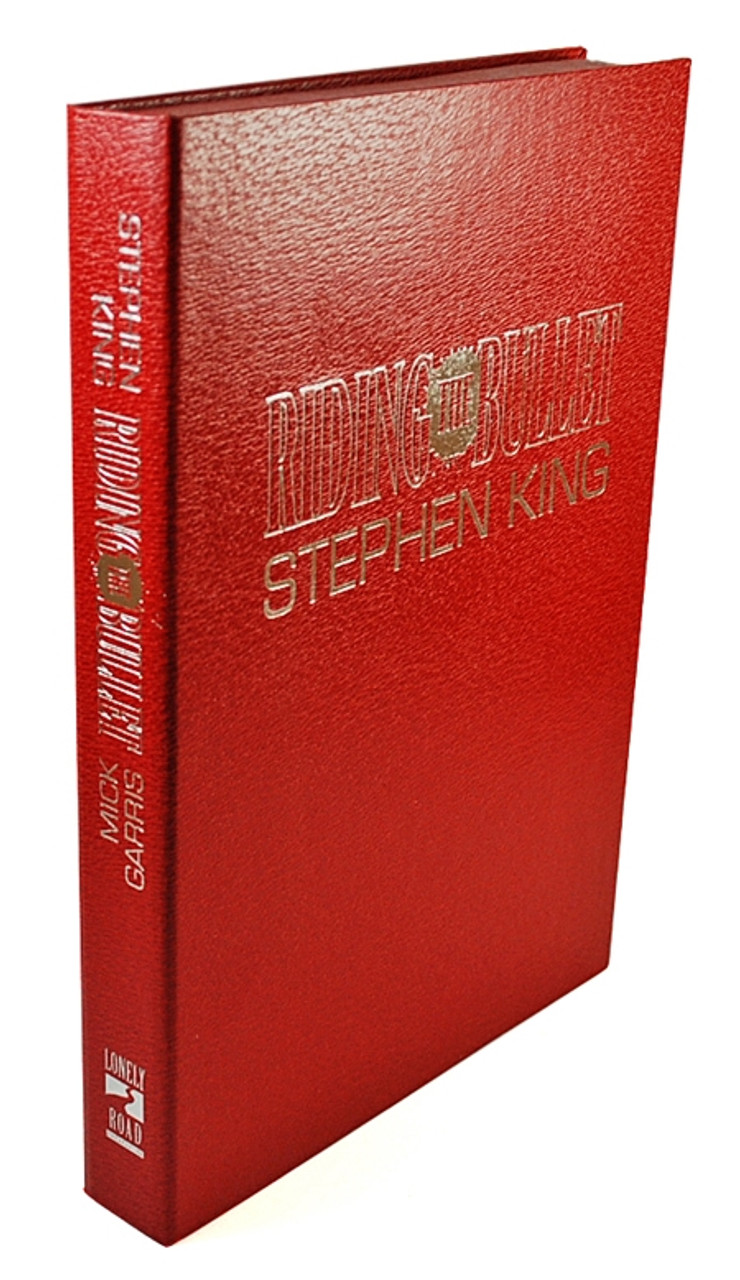 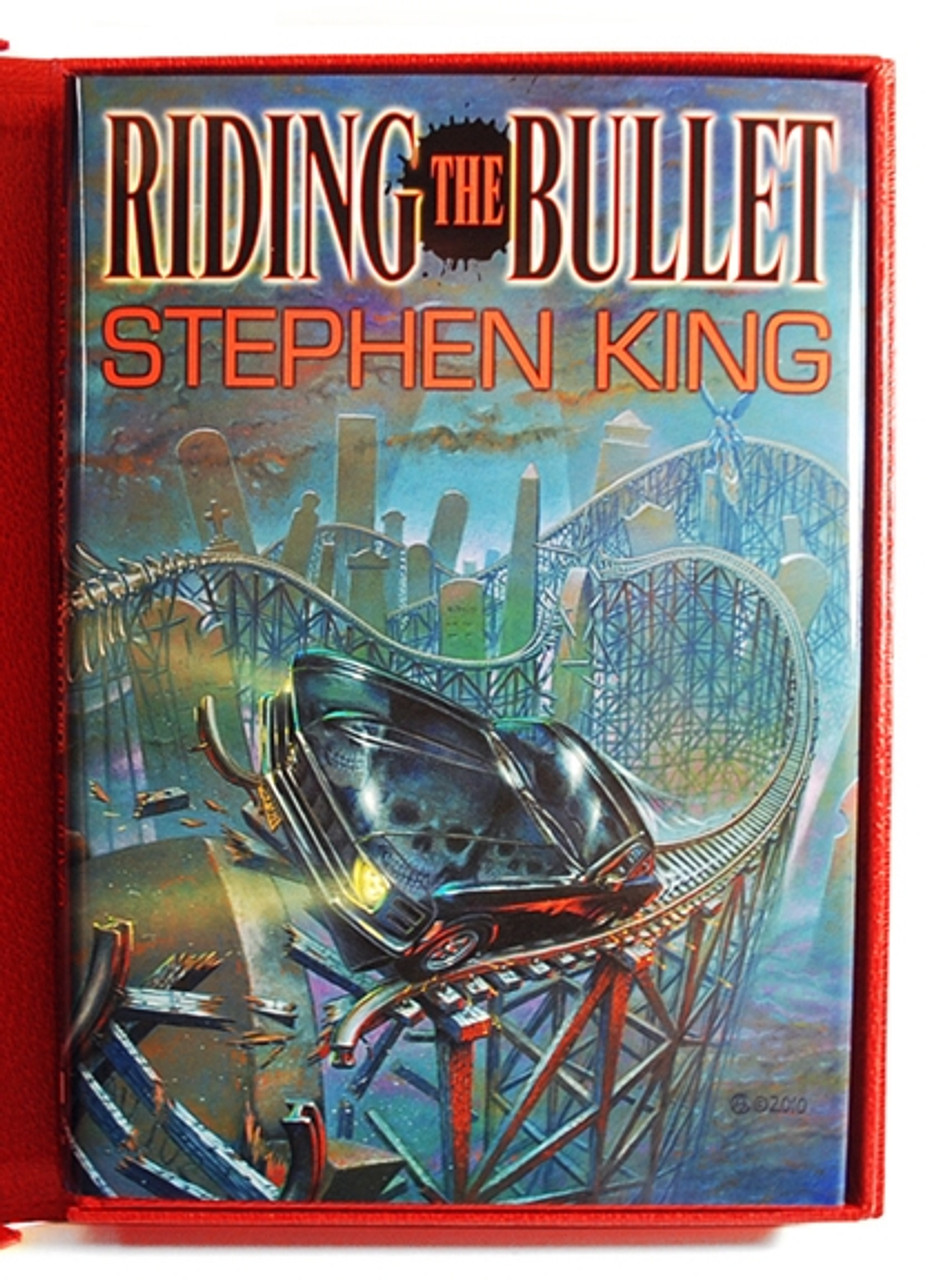 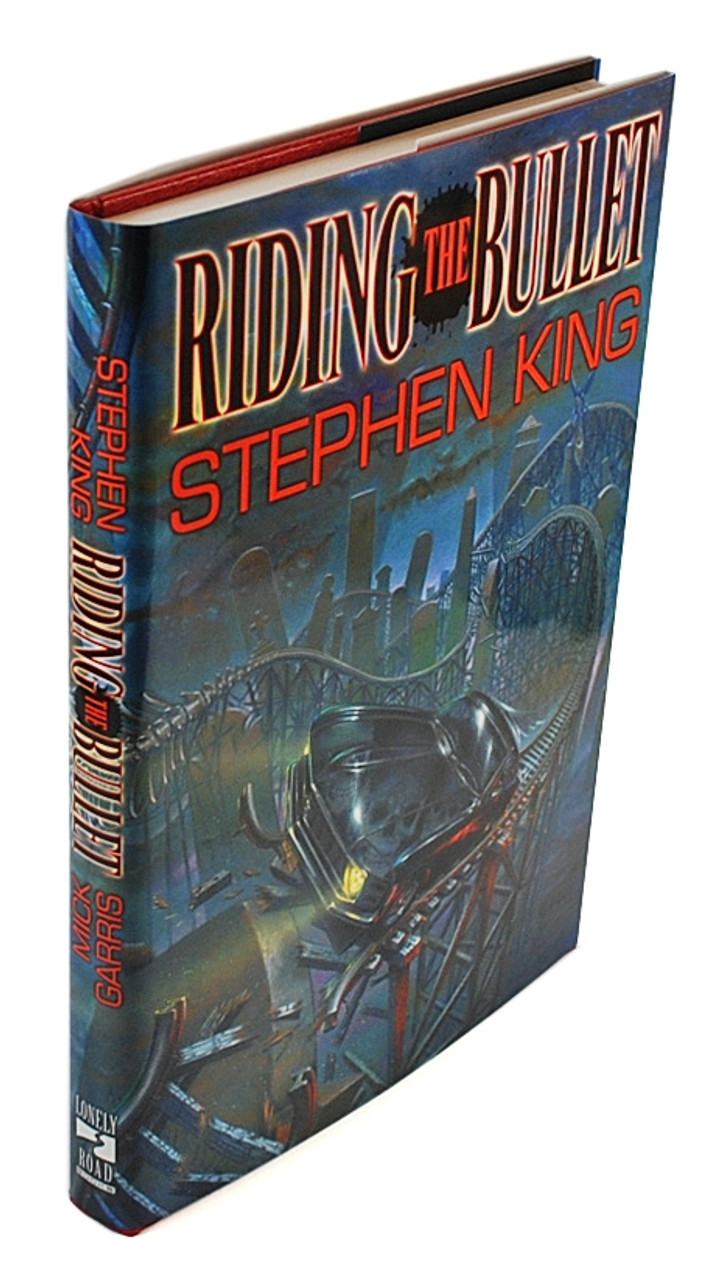 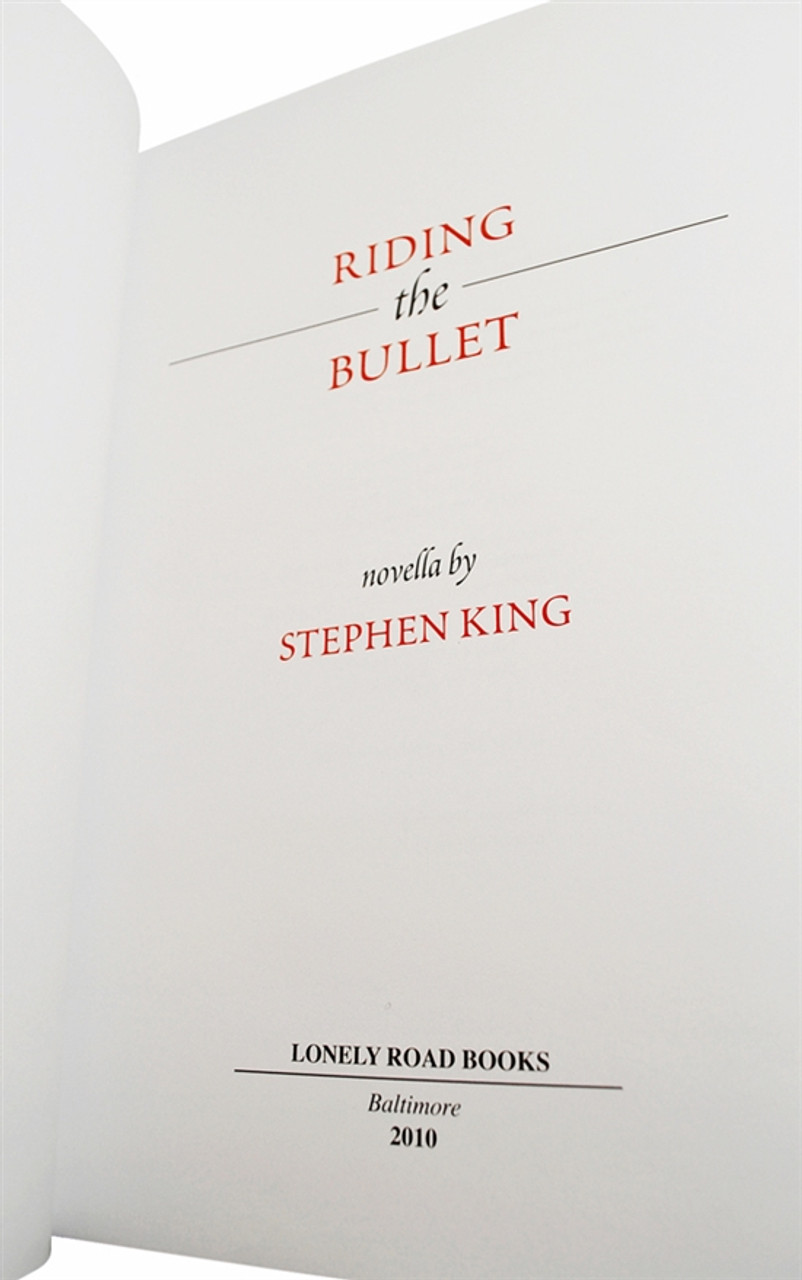 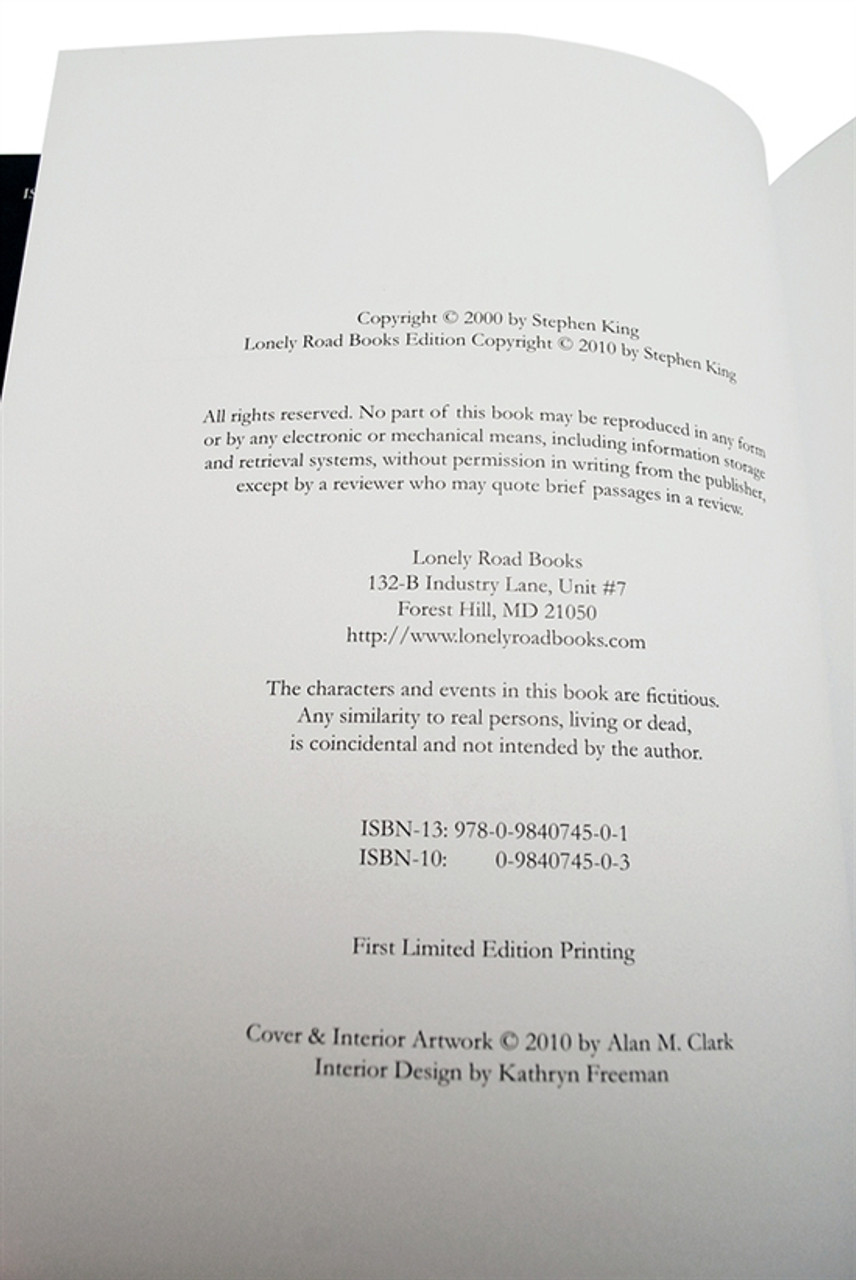 Lonely Road Books 2010. Stephen King "Riding The Bullet" This is the tray-cased Limited Edition of only 500 deluxe copies signed by Mick Garris and Alan M. Clark on a specially illustrated signature page, featuring the complete text of the Collector's Gift Edition but bound in a different deluxe material and housed in a custom-made tray-case. The original issue price was $250. This special signed limited edition is now OUT OF PRINT from the publisher and will not be produced ever again !

Riding the Bullet: The Deluxe Special Edition by Stephen King and Mick Garris

Riding the Bullet Riding the Bullet by Stephen King has been described as a "ghost story in the grand manner" and the story of "a young man who hitches a ride with a driver from the other side," but in this special edition only available from Lonely Road Books, we're going to show you King's classic novella in a way you've never seen it before: alongside the feature film screenplay adaptation by director Mick Garris.

The road from print to the silver screen is often a bumpy one and much has been written about how a story is sometimes transformed to make it work in moving pictures. This is your chance to experience Riding the Bullet in a way only those close to the production of the film ever have. Start with King's original novella, then flip the book over and read the original script by Mick Garris. Compare what he kept, what he had to change, and even the storytelling flourishes he added to round out the tale.

This highly collectible special edition was published in the same manner as our acclaimed edition of The Arthur Darknell Double , in the tradition of the old Ace Doubles. This is the very first Stephen King Limited Edition to be published in this manner, and it was a huge hit with the collectors.

Complete with stunning cover artwork by Alan M. Clark and beautiful interior artwork by Bernie Wrightson, this exclusive Lonely Road Books special edition was one of the most discussed small press books of the year.

Stephen King is the author of more than fifty books, all of them worldwide bestsellers. Among his most recent are the Dark Tower novels, Cell, From a Buick 8, Everything's Eventual, Hearts in Atlantis, The Girl Who Loved Tom Gordon, Lisey's Story, Duma Key, and Bag of Bones. His acclaimed nonfiction book, On Writing, was also a bestseller. He was the recipient of the 2003 National Book Foundation Medal for Distinguished Contribution to American Letters. He lives in Maine with his wife, novelist Tabitha King.

The AuthorsAward-winning filmmaker Mick Garris has written or co-authored numerous feature films and teleplays, and he is Creator and Executive Producer of Showtime's Masters of Horror series, as well as creator of the NBC series, Fear itself. A Life in the Cinema, his first book, was a collection of short stories and a screenplay based on one of the included stories and his first novel, Development Hell, was published by Cemetery Dance. He has also published short fiction in numerous books and magazines. He is currently prepping a feature film based on Stephen King's bestselling novel Bag of Bones. Garris lives in Studio City, California, with his wife, Cynthia, an actress, musician, composer and muse.

With an oversized trim size, two color printing throughout, and an extremely low print run, Riding the Bullet by Stephen King and Mick Garris was designed with the ultimate collectors in mind. Each edition featured a deluxe binding selected from the finest materials available. Like the previous Lonely Road Books releases, all of the signed copies were reserved within a week of bring announced, so the Collector's Gift Edition is the only remaining edition available!

Uncle Stevie's 2000 novella originally released online, it crashed servers everywhere gets the red-carpet treatment in this deluxe double illustrated hardcover slipcased edition. First, you get King's spook story about a hitchhiker who thumbs a ride from a dead man while desperately trying to reach his hospitalized mother. When you reach King's plot-twisting end, you flip the book over and can then read Garris's screenplay adaptation. Along with the script, this includes Garris's director's notebook sporting story boards, production schedules, and set photos, plus a gallery of wicked concept art by no less than Bernie Wrightson, Mike Rogers, Classic Returns for LibraryJournal.com

If you're looking for a unique King experience, read this book, and then have a midnight screening of the film.
Joshua Jabcuga, Bookgasm.com

VERY FINE GUARANTEED. As New in As New tray-case and without any flaws. The condition is of the highest quality.