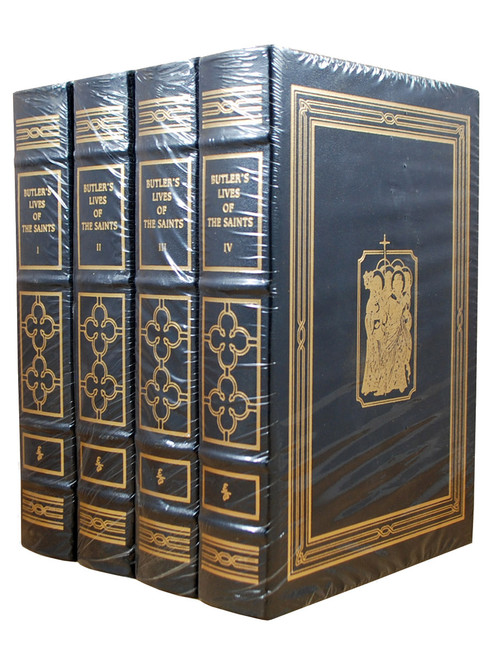 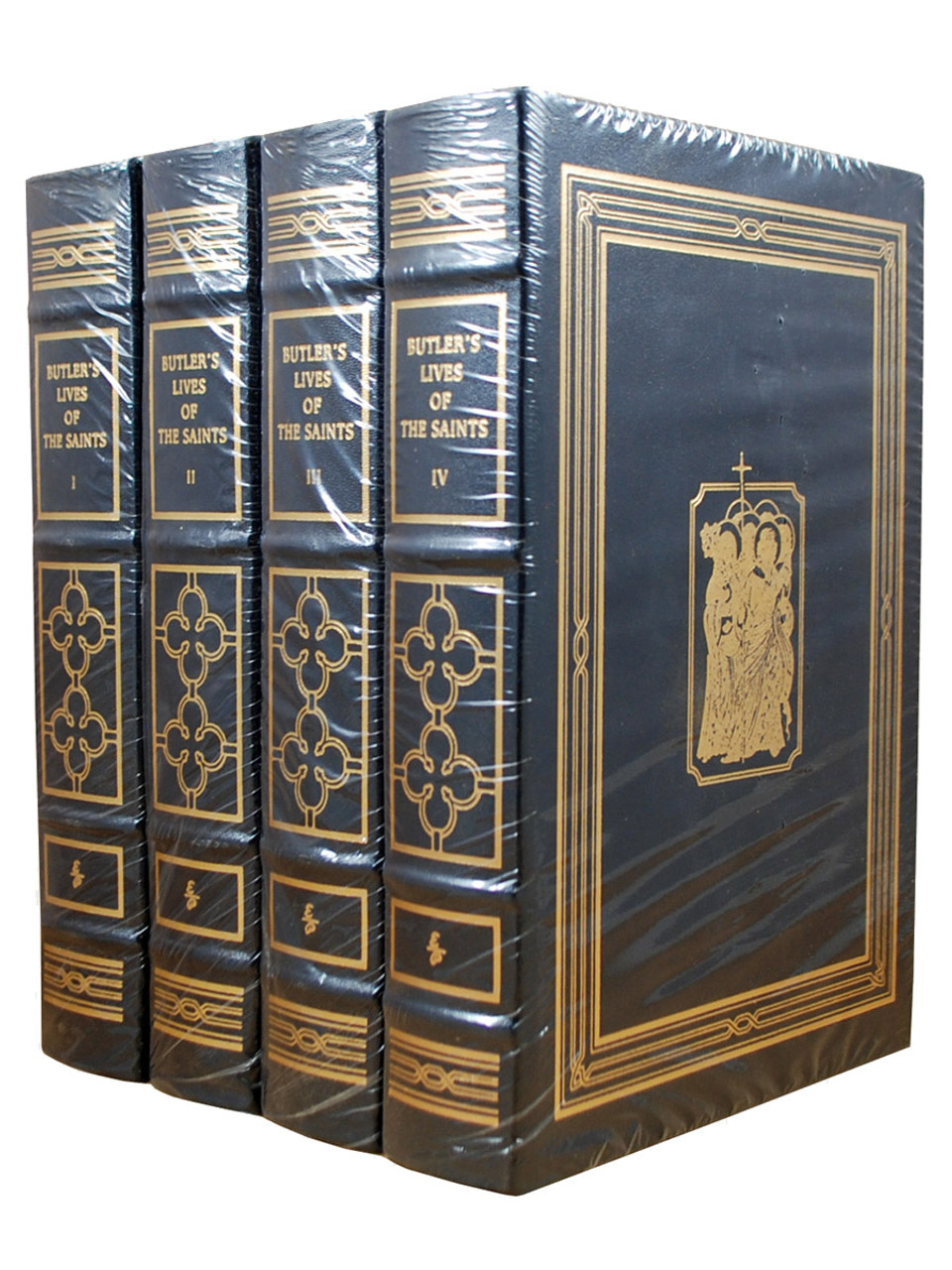 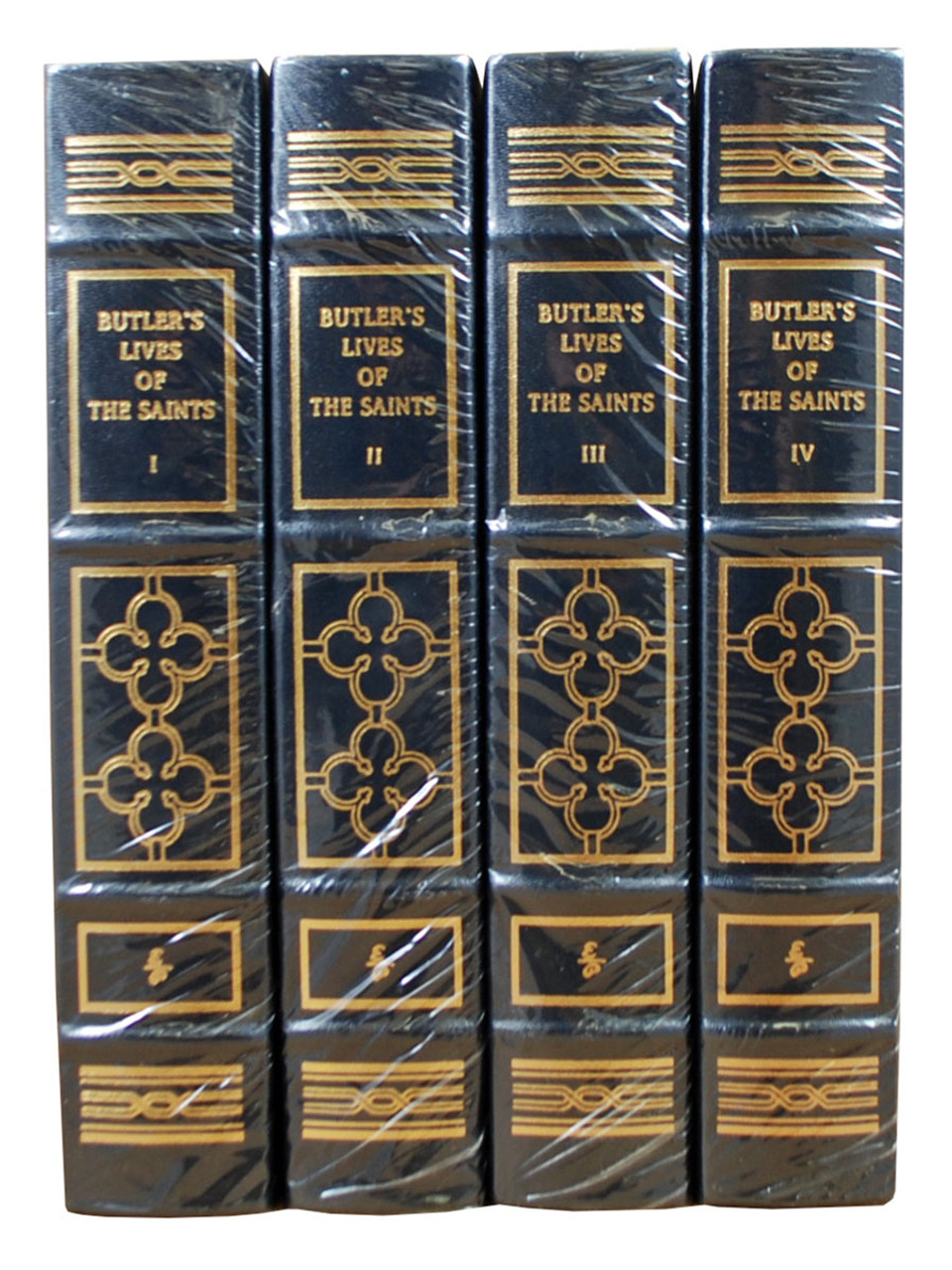 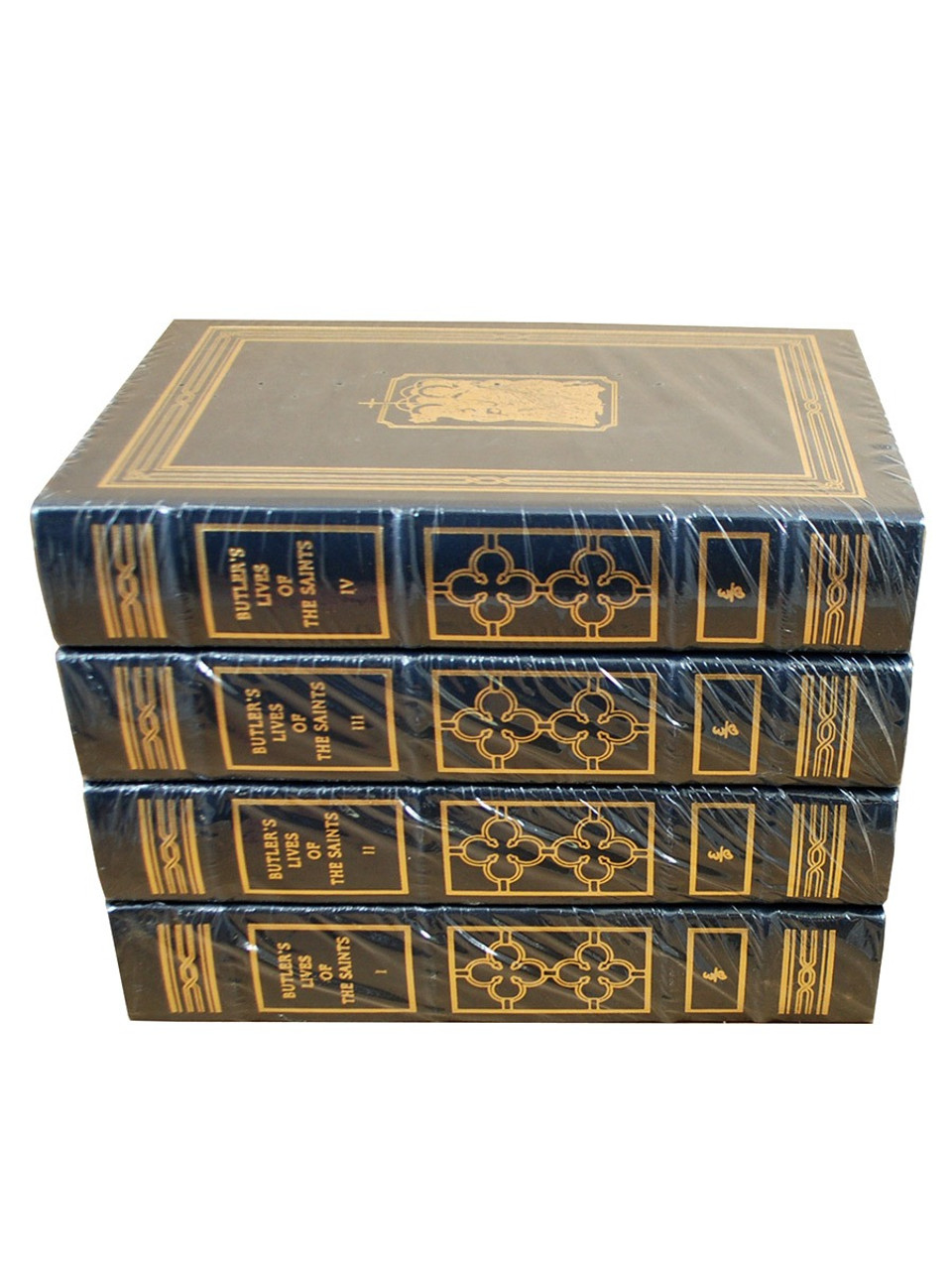 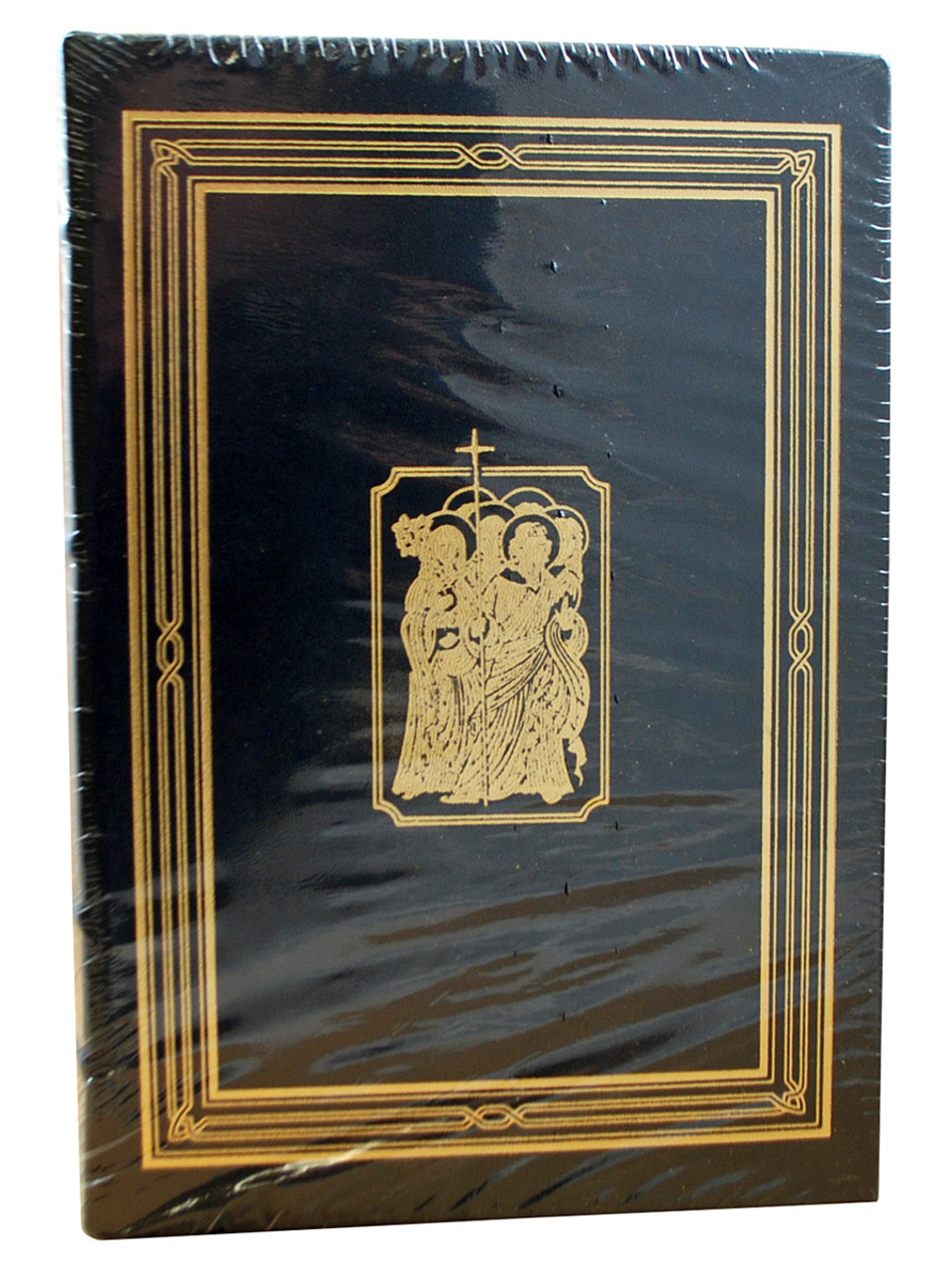 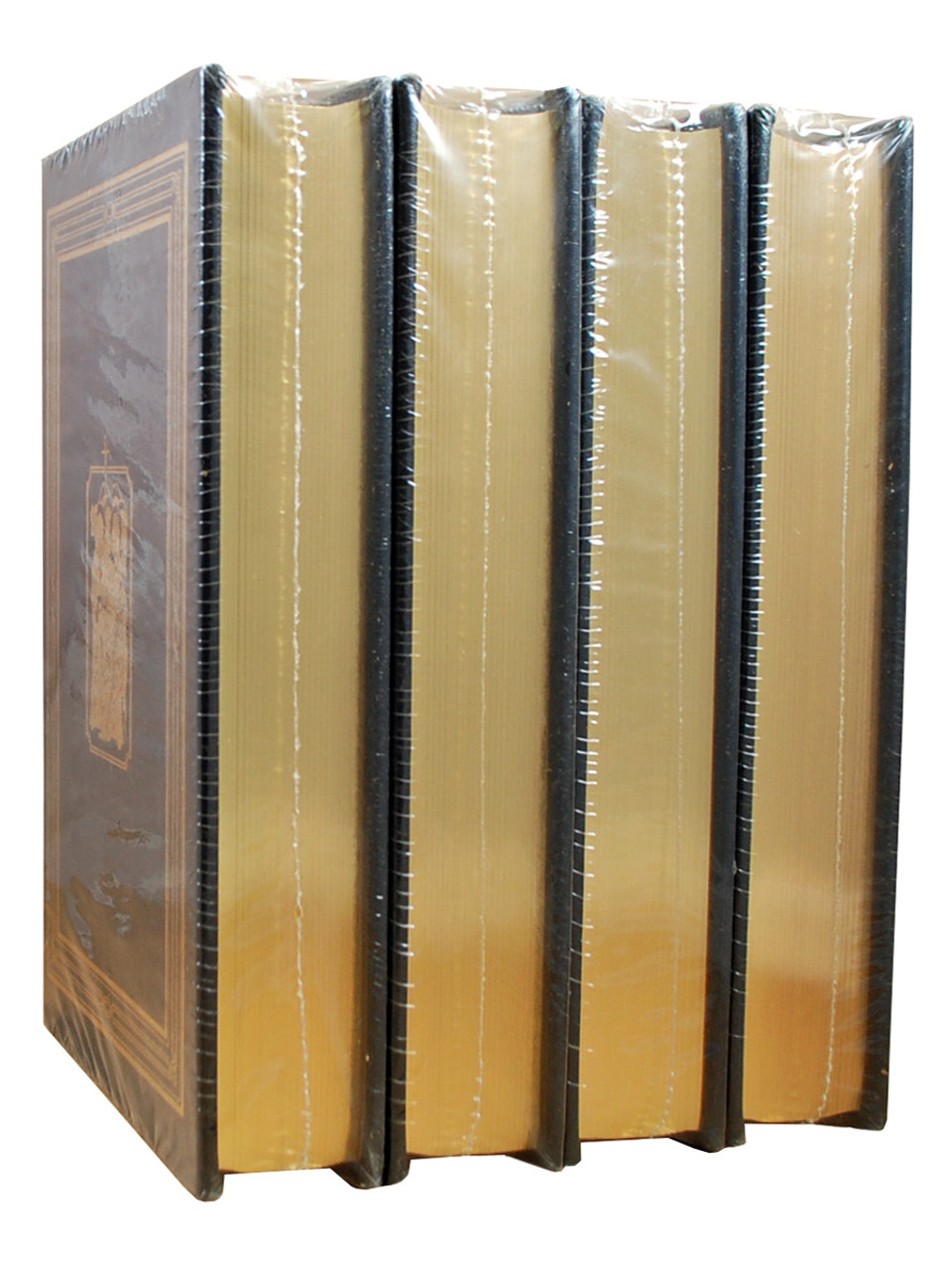 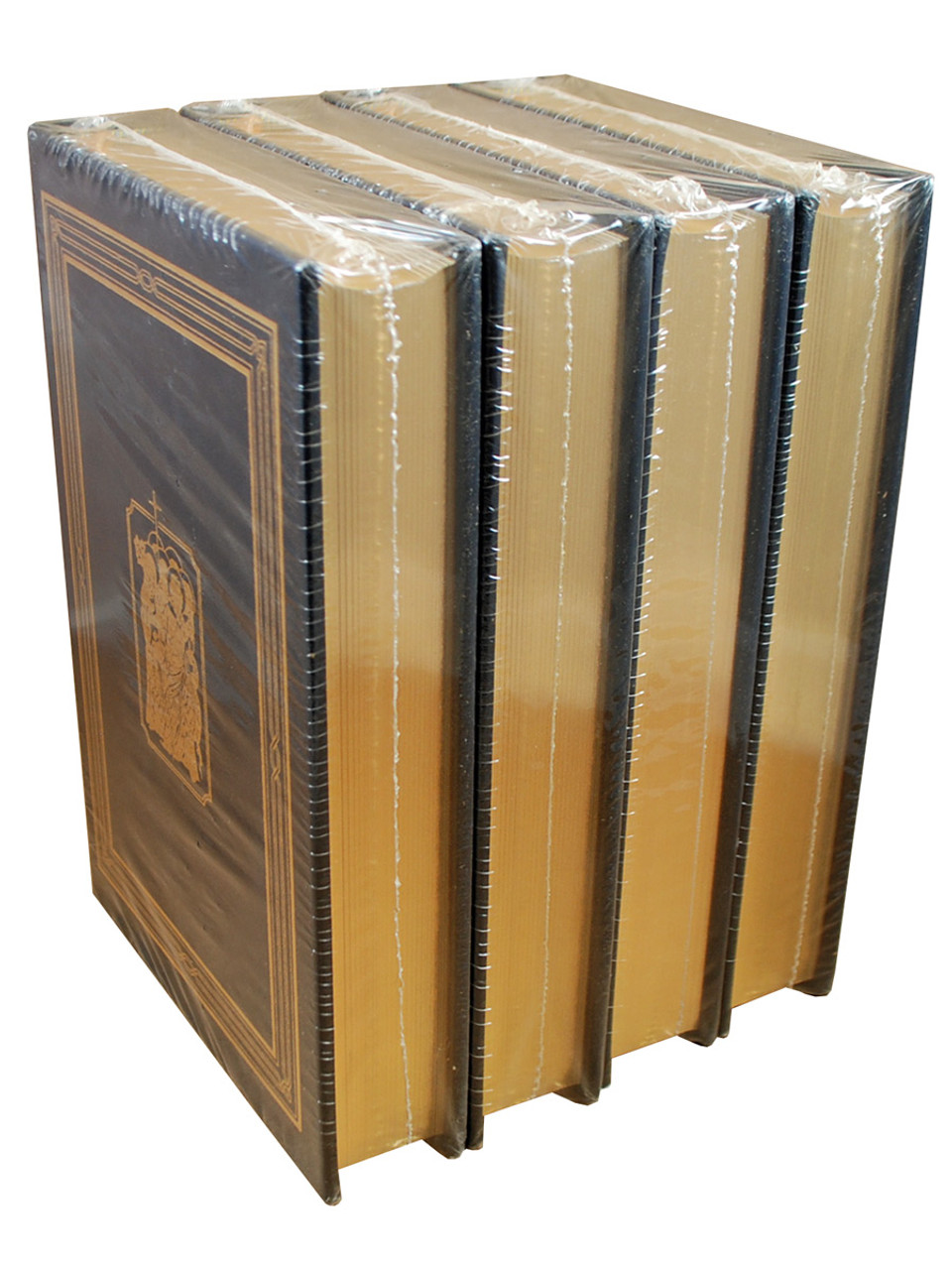 Easton Press. Norwalk, CT. 1995. "Butler's Lives Of The Saints". A complete matching 4-volume set. Makes a lovely addition to the library of any serious collector. Bound in full genuine leather with exquisite gold detailing. Includes extra unattached Ex-Libris bookplates for your own personalization.  A handsome set in rich indigo leather and gold detail. The micro pebbled leather is richly finished and very fine with a nice sheen. Sealed.

This collection is now OUT OF PRINT from the publisher.

The Lives of the Saints

Butler's great work, The Lives of the Fathers, Martyrs and Other Principal Saints ("Butler's Lives"), the result of thirty years' study, was first published in four volumes in London, 1756–1759. It is a popular and compendious reproduction of the Acta Sanctorum, exhibiting great industry and research, and is in all respects the best compendium of Acta in English. Butler's magnum opus has passed many editions and translations.

First written in the mid-eighteenth century, Butler's Lives of the Saints, now available in a four-volume set was revised in 1956 to include 2,565 saints compared to the original 1,486. Carefully edited Herbert J. Thurston, S.J., and Donald Attwater to retain the charms of Butler's original prose style, this work of devotion and scholarship offers truths central to Christianity and underlying themes of Christian love.

Alban Butler was born in 1710, at Appletree, Aston le Walls, Northamptonshire, the second son of Simon Butler, Esq. His father died when he was young and he was sent to the Lancashire boarding school ran by Dame Alice. He went on to a Catholic further education at the English College, Douai, in France. In 1735 Butler was ordained a priest. At Douai, he was appointed professor of philosophy, and later professor of theology. It was at Douai that he began his principal work The Lives of the Fathers, Martyrs and Other Principal Saints. He also prepared material for Richard Challoner's Memoirs of Missionary Priests, a work on the martyrs of the reign of Elizabeth.

In 1745, Butler came to the attention of the Duke of Cumberland, younger son of King George II, for his devotion to the wounded English soldiers during the defeat at the Battle of Fontenoy.

He laboured for some time as a missionary priest in Staffordshire, and was finally appointed president of the English seminary at Saint Omer in France, where he remained until his death.

Butler returned to England in 1749 and was made chaplain to the Duke of Norfolk, whose nephew and heir, the Hon. Edward Howard, Butler accompanied to Paris as tutor. While he was in Paris, Butler completed his Lives. During his term as President of the English seminary, Butler also served the bishops of Arras, Saint-Omer, Ypres, and Boulogne-Sur-Mer as their Vicar-General. Butler died in Saint-Omer in 1773 and was buried in the parish church of Saint-Denis.

See An Account of the Life of A. B. by C. B., i.e. by his nephew Charles Butler (London, 1799); and Joseph Gillow's Bibliographical Dictionary of English Catholics, vol. i.

Source: Wikipedia
Condition: As New (Sealed). Each volume is mint and sealed in the original shrink-wrap. Unread books with no bumped corners. Sharp corners. No marks, writings or stamps. No scratches and/or blemishes to the gilded page edges.