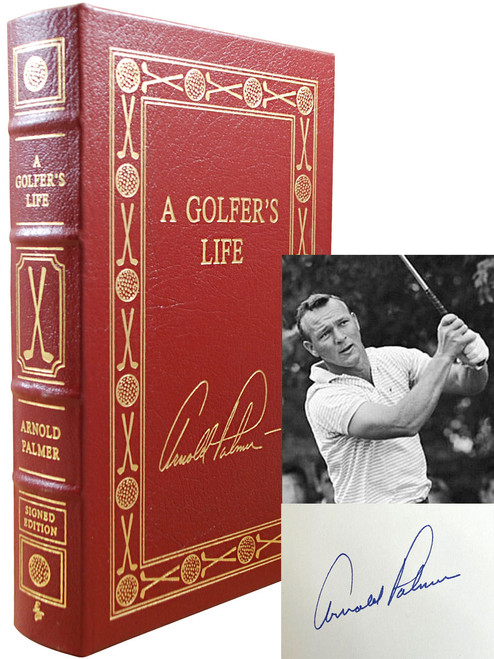 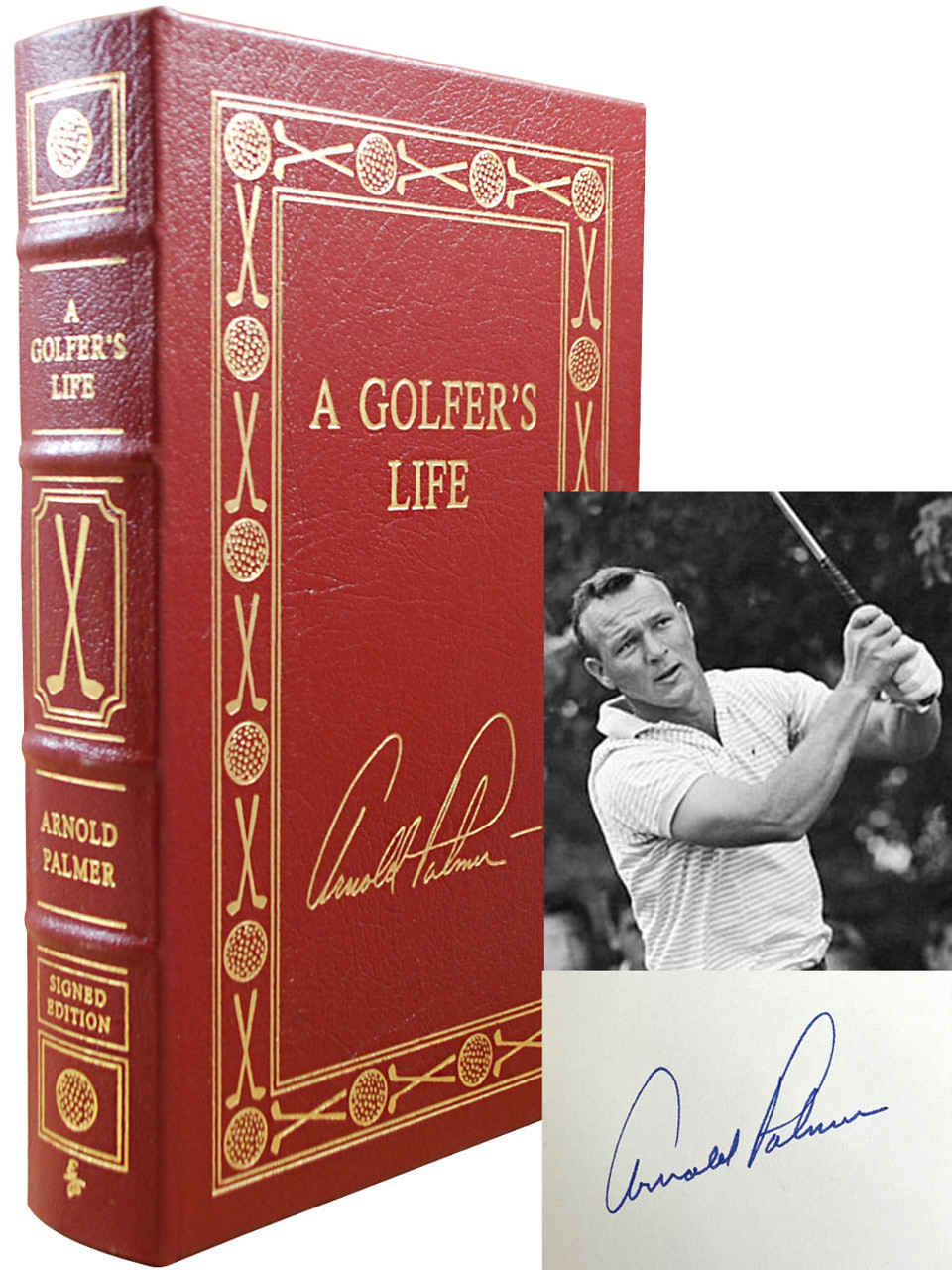 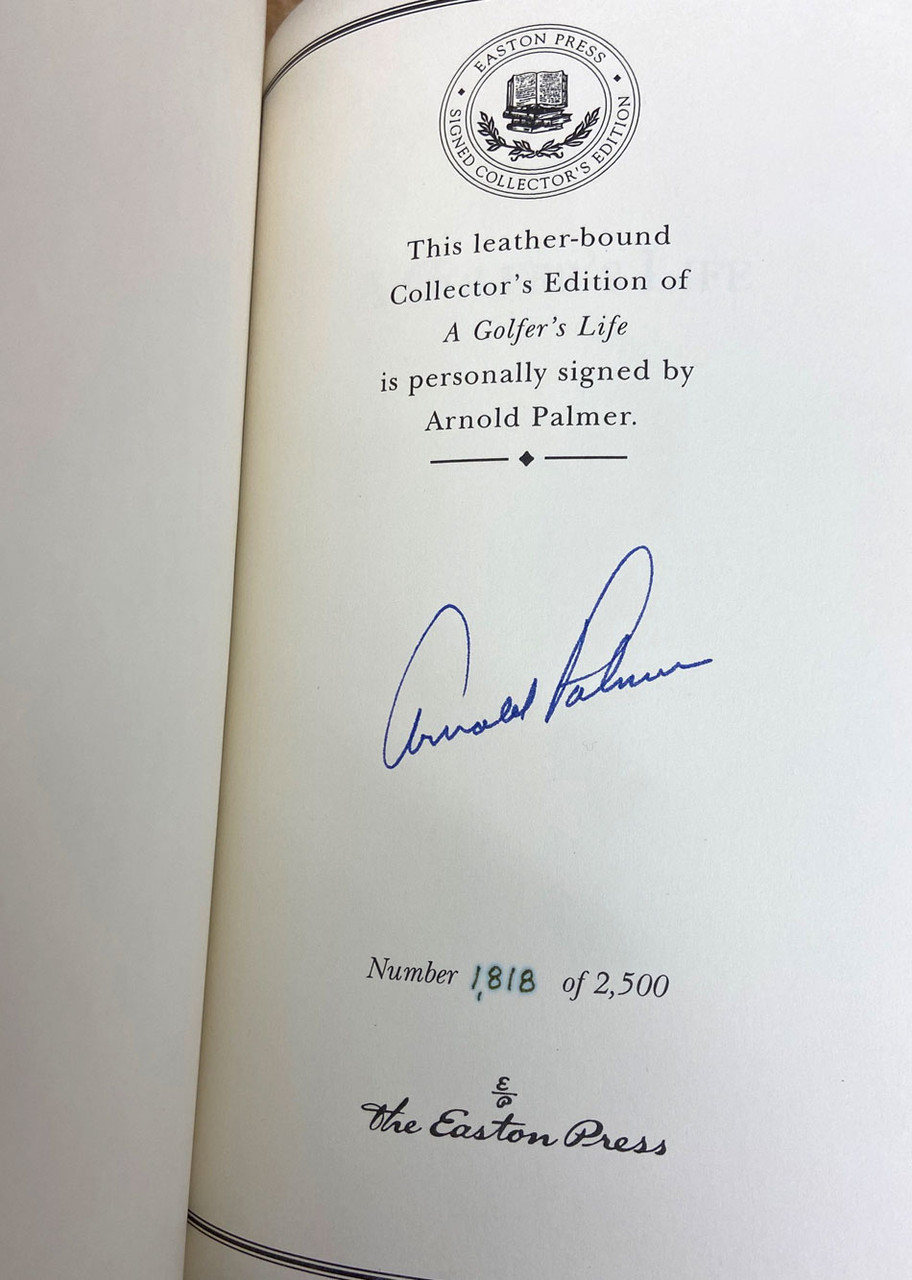 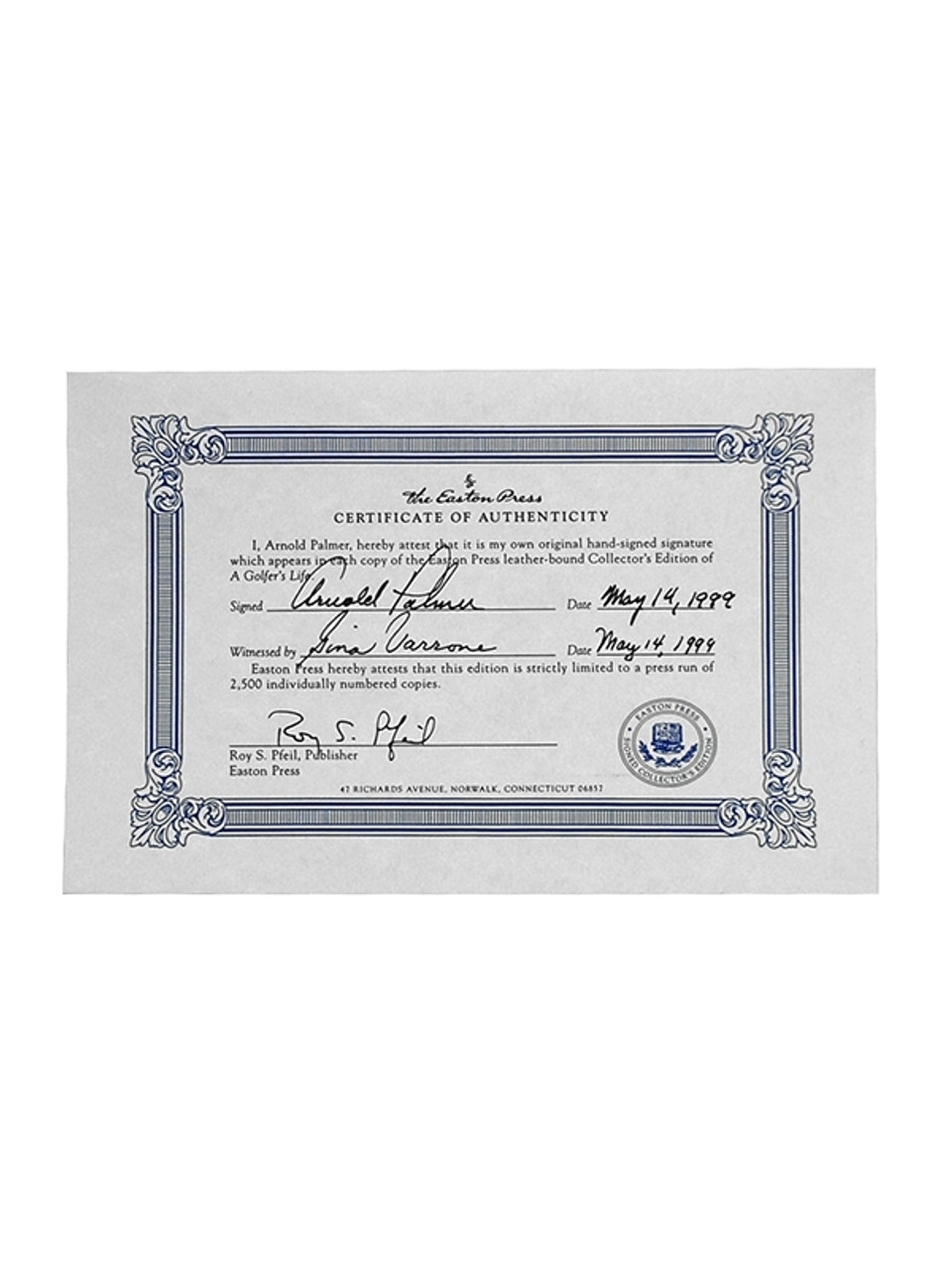 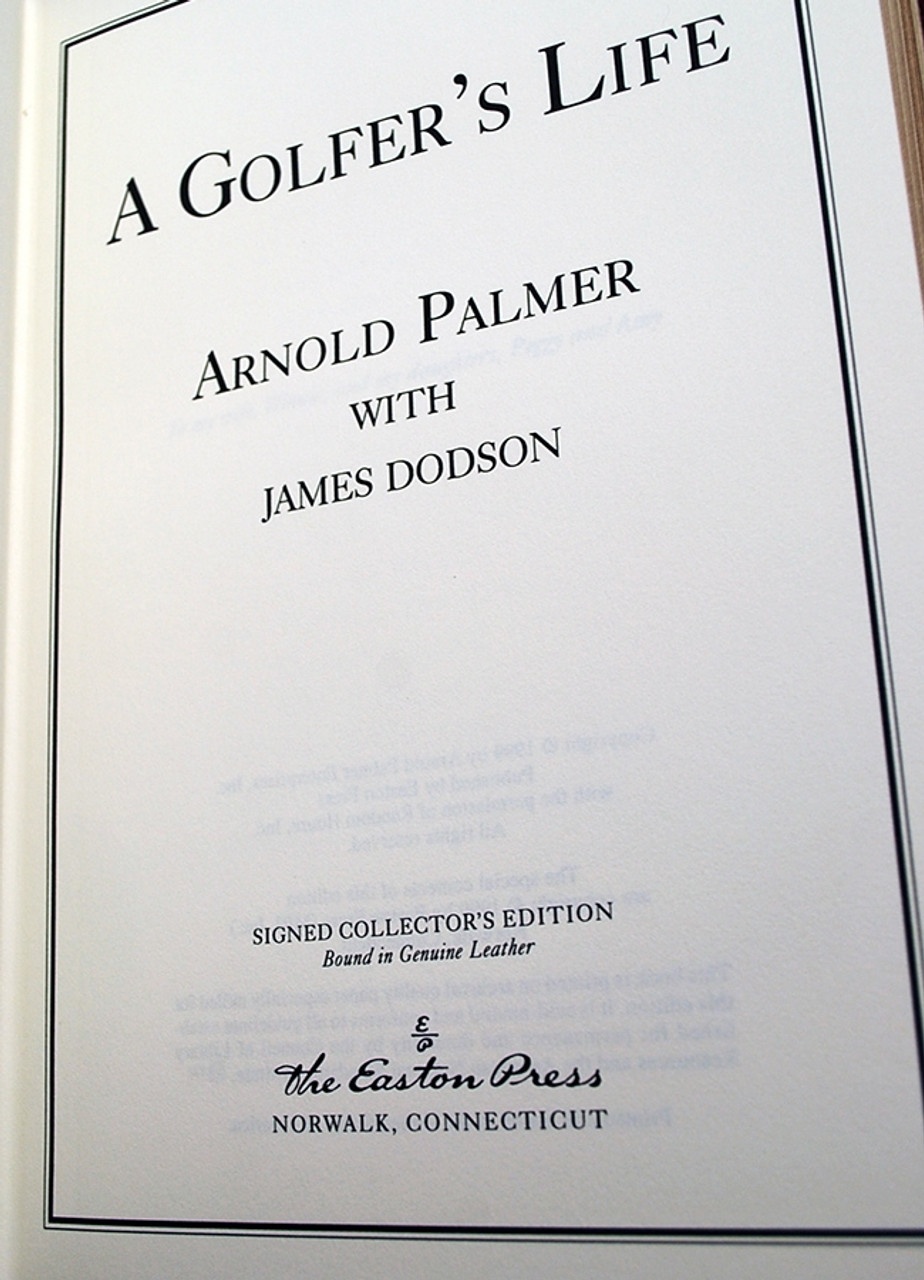 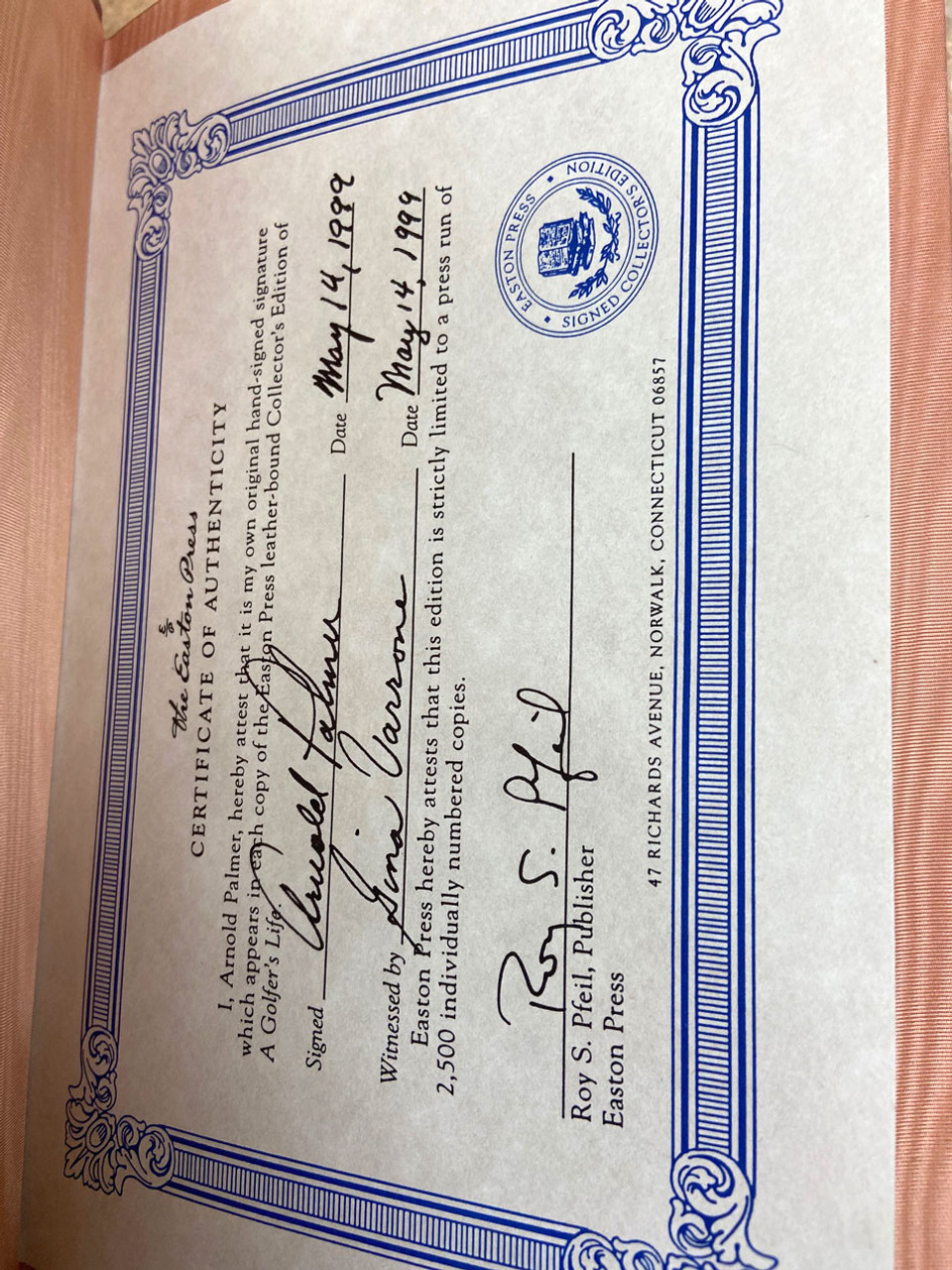 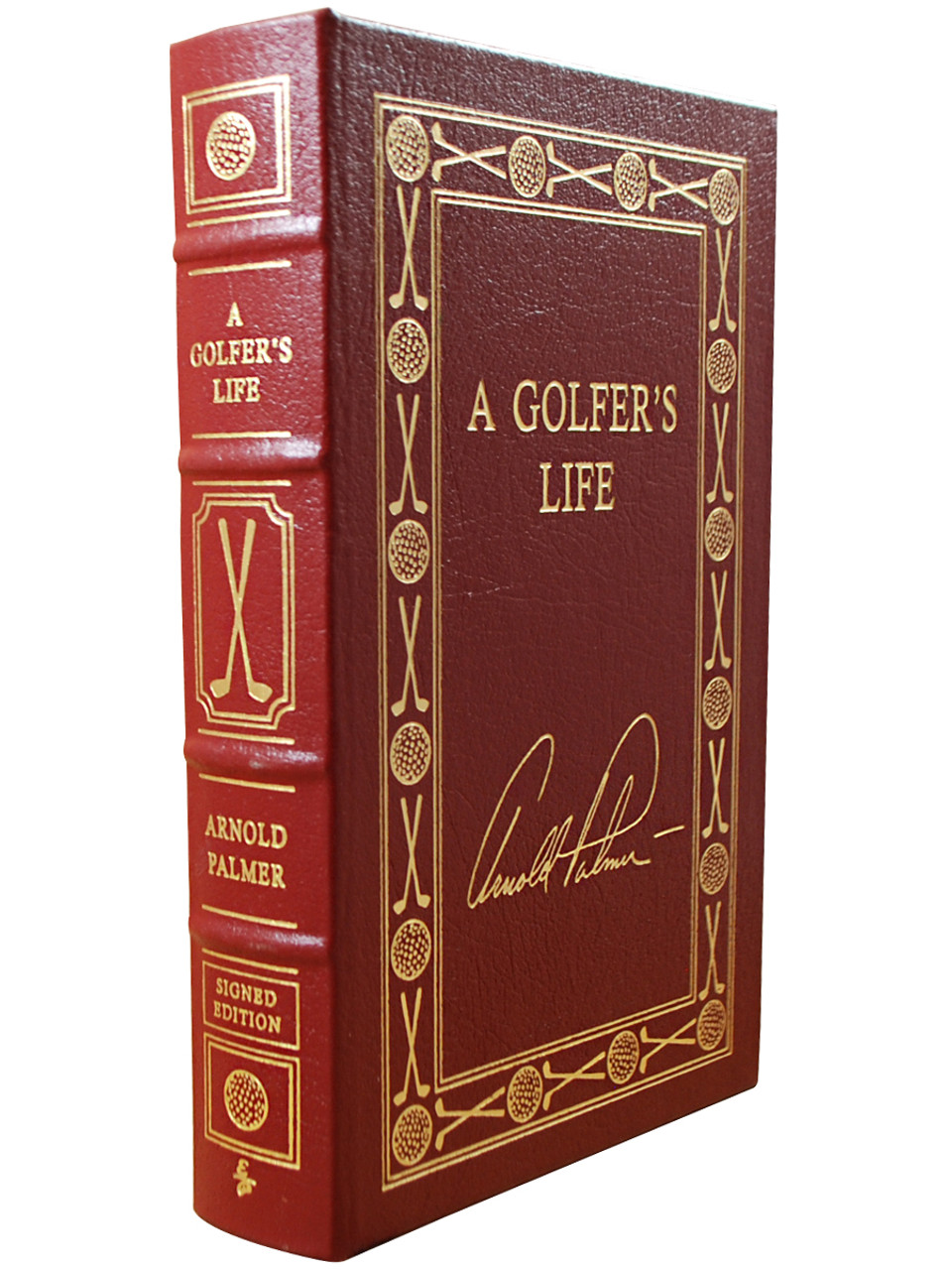 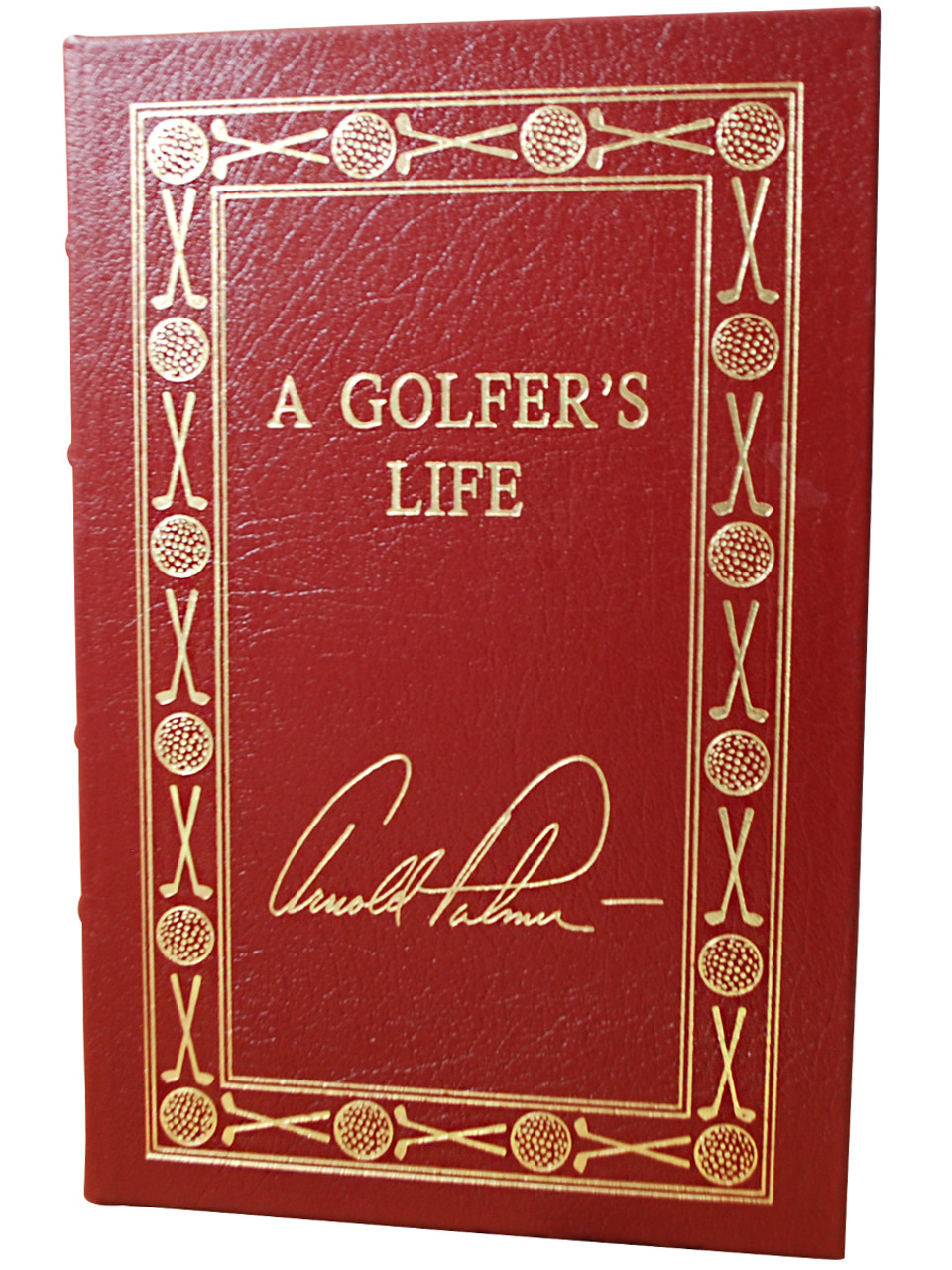 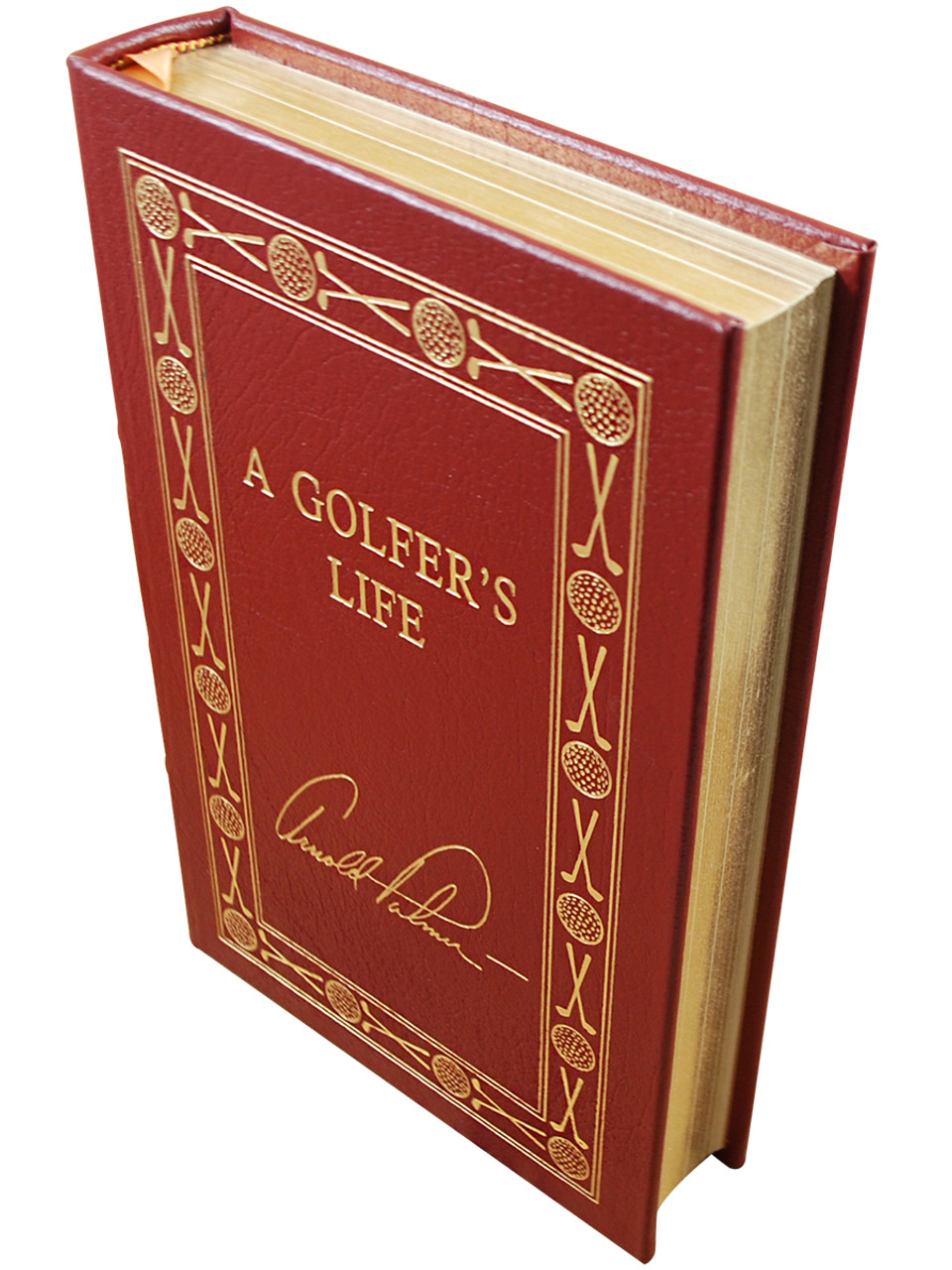 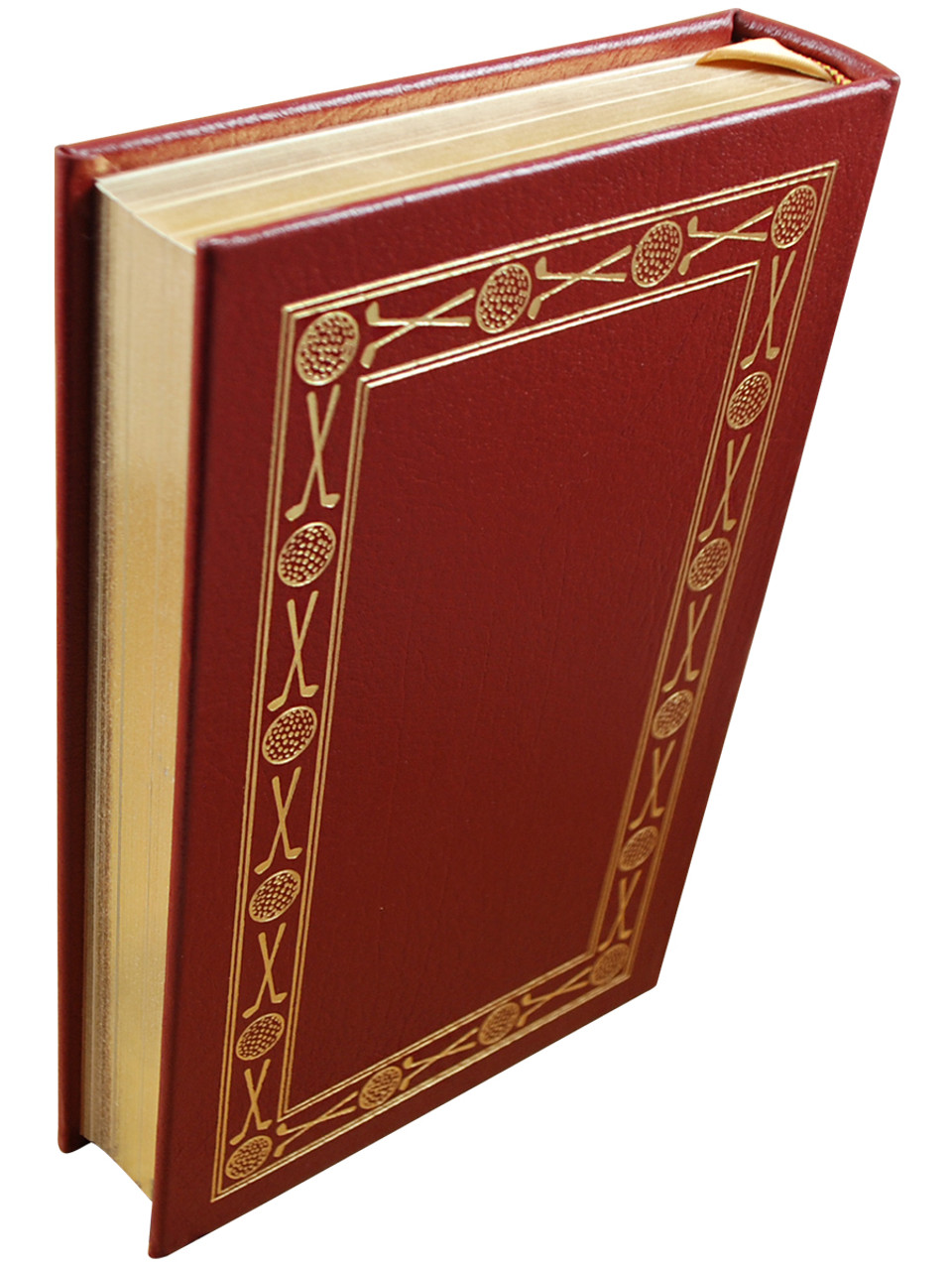 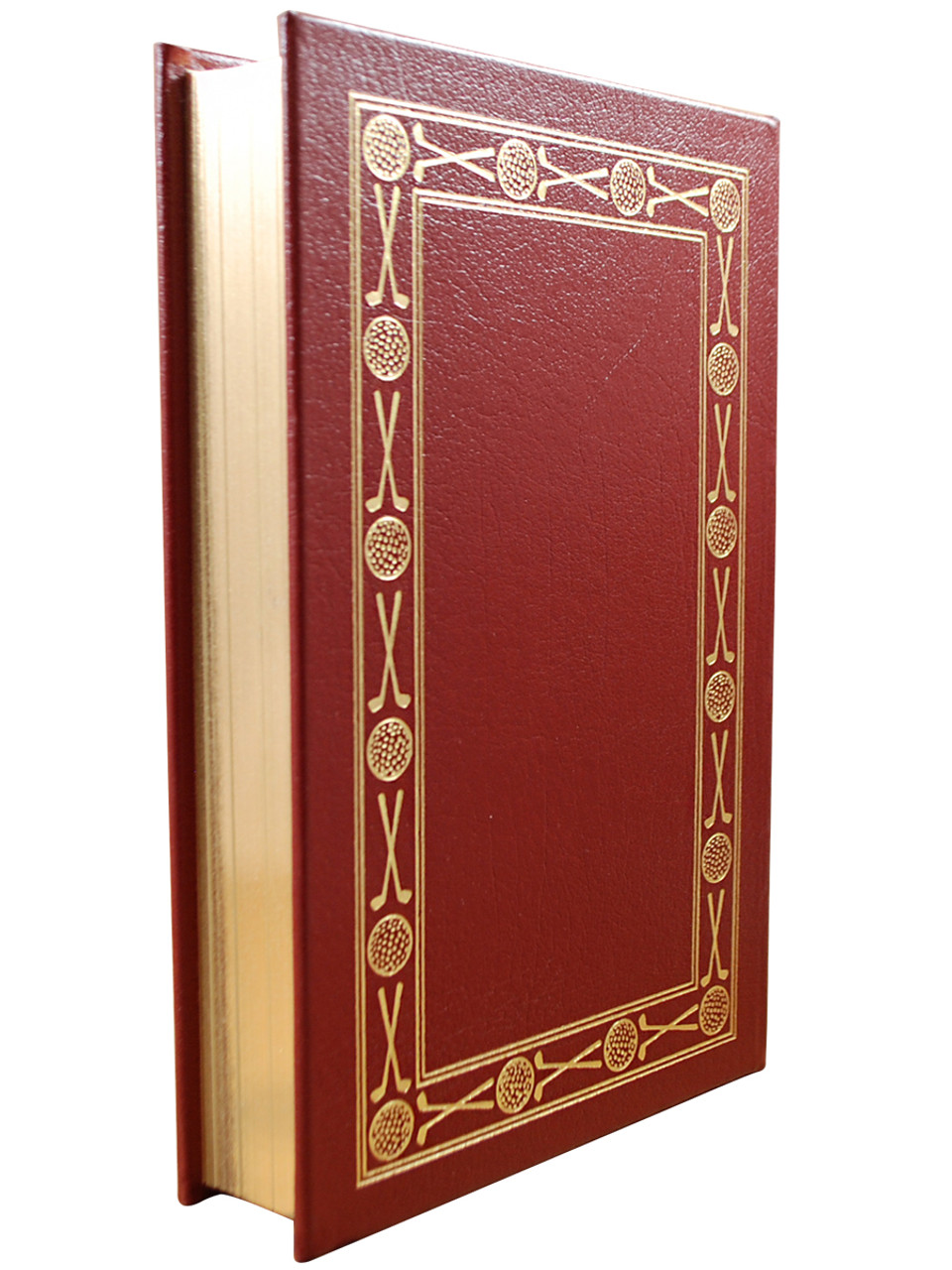 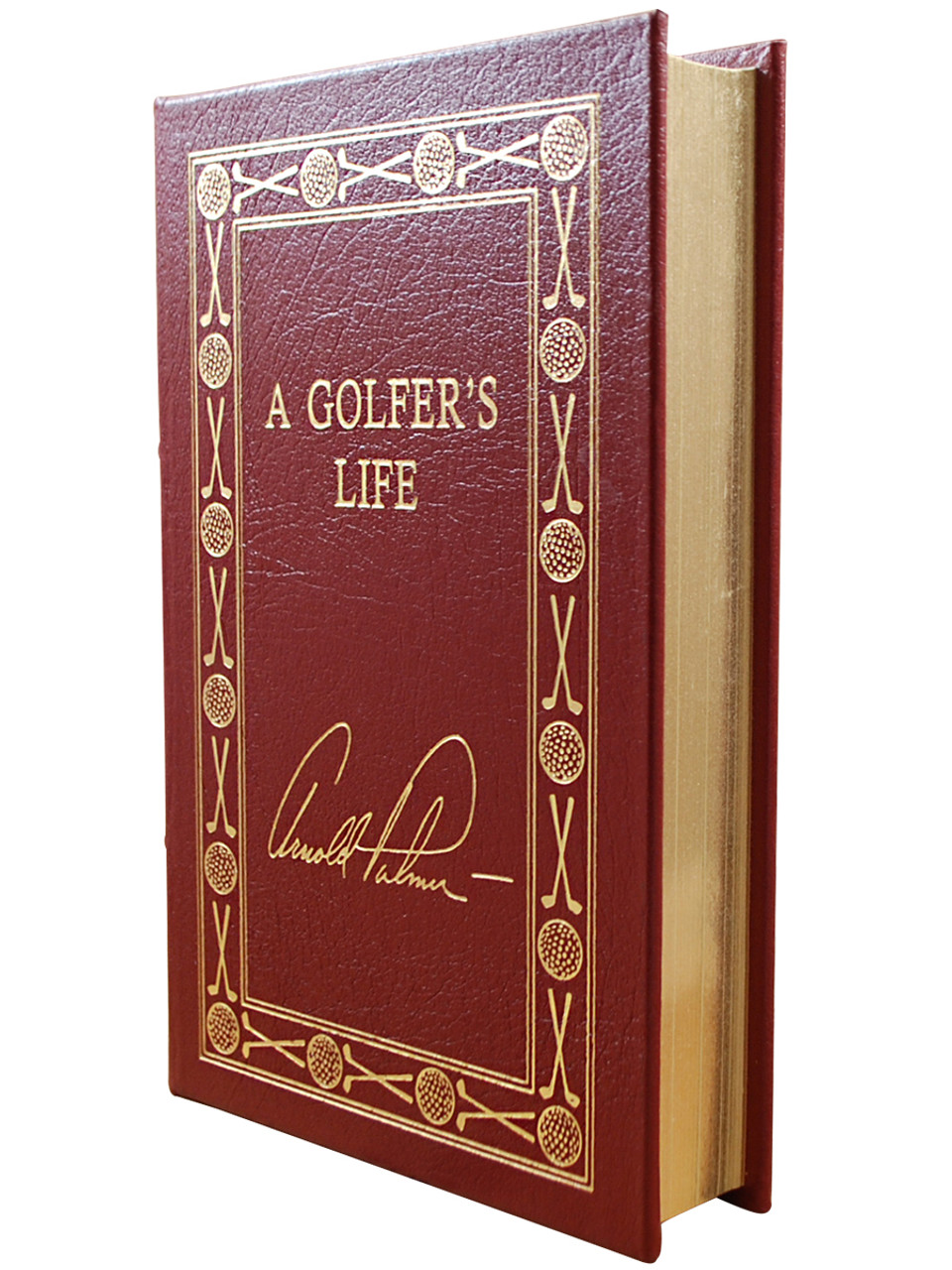 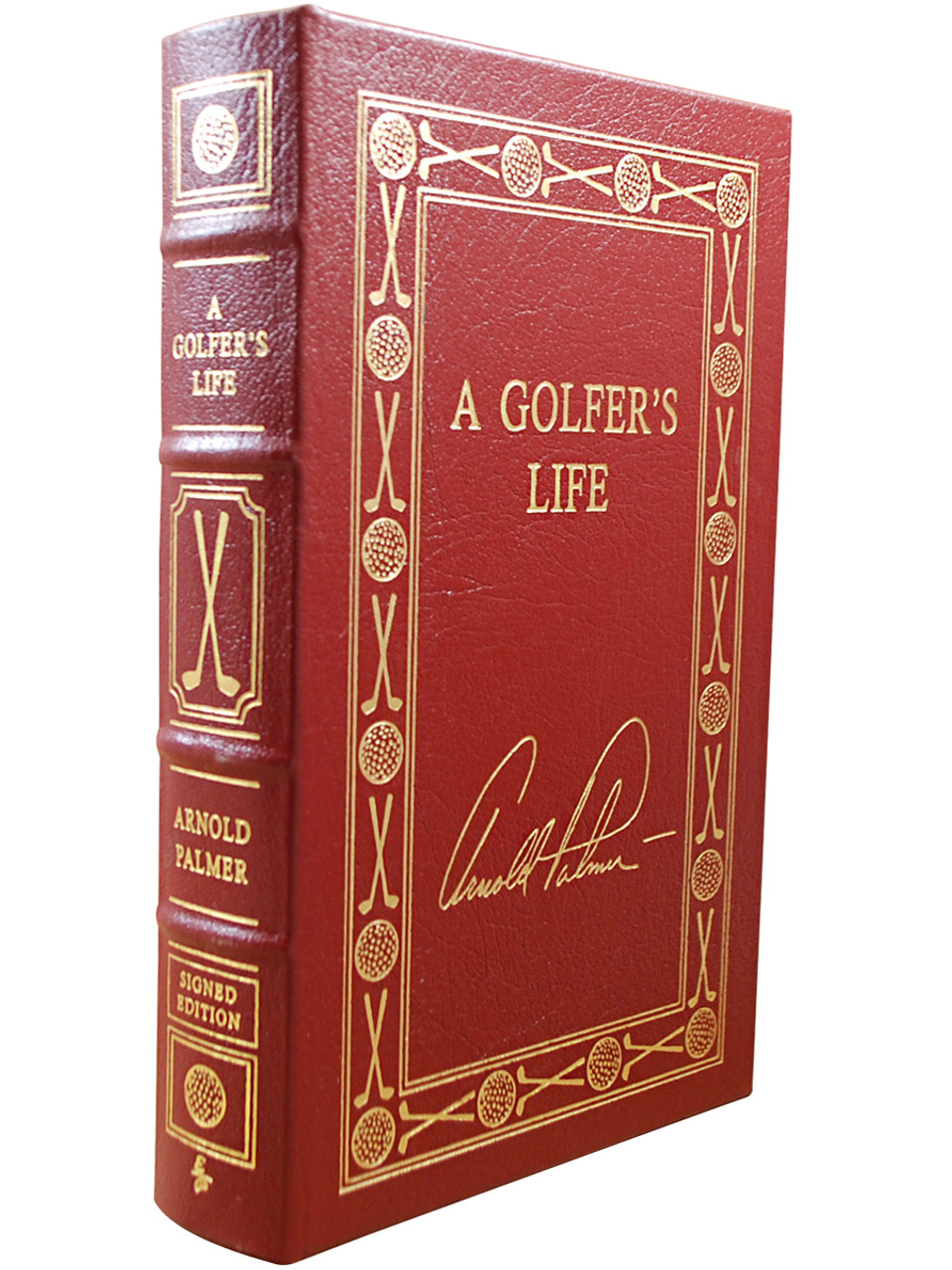 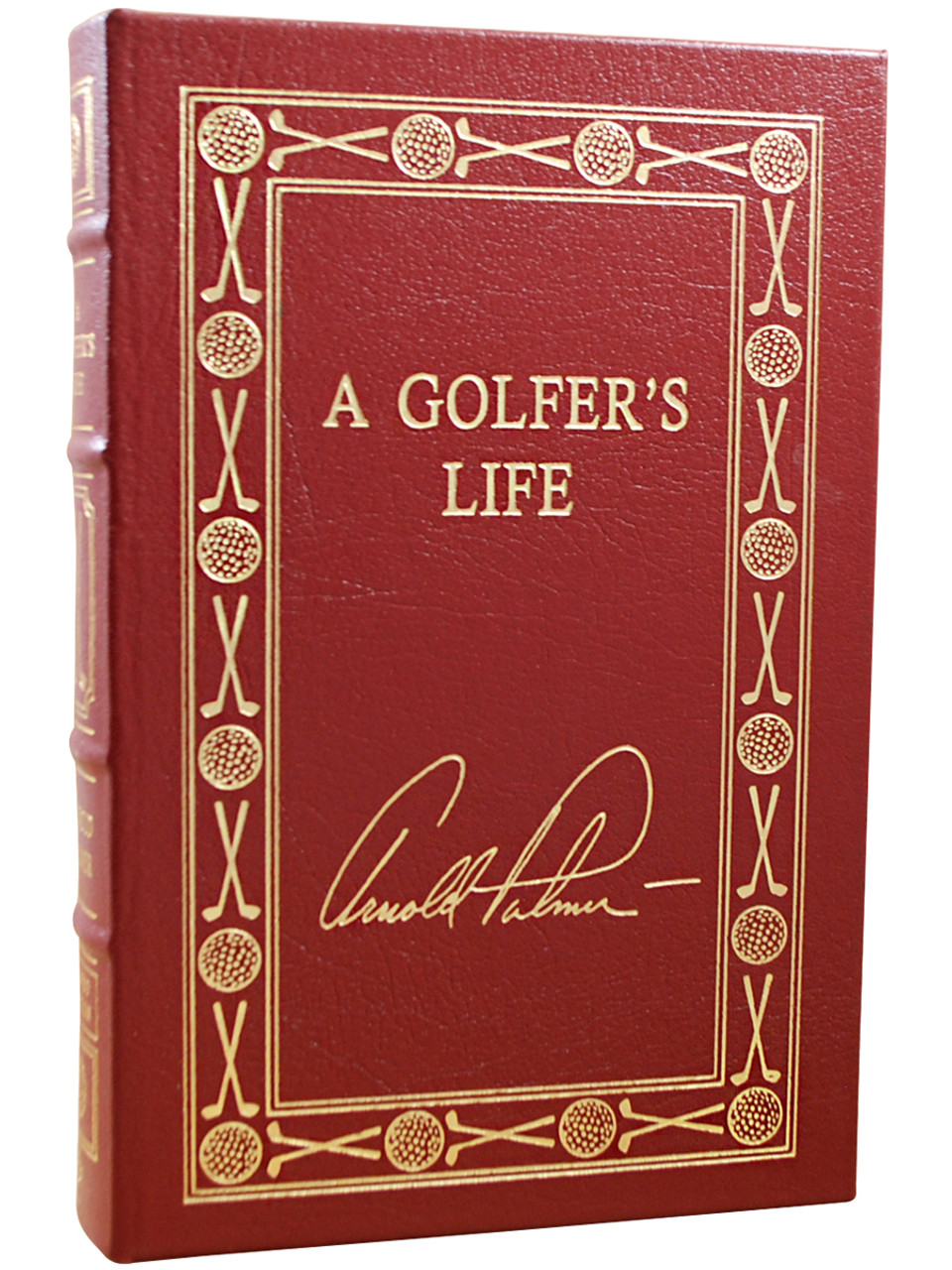 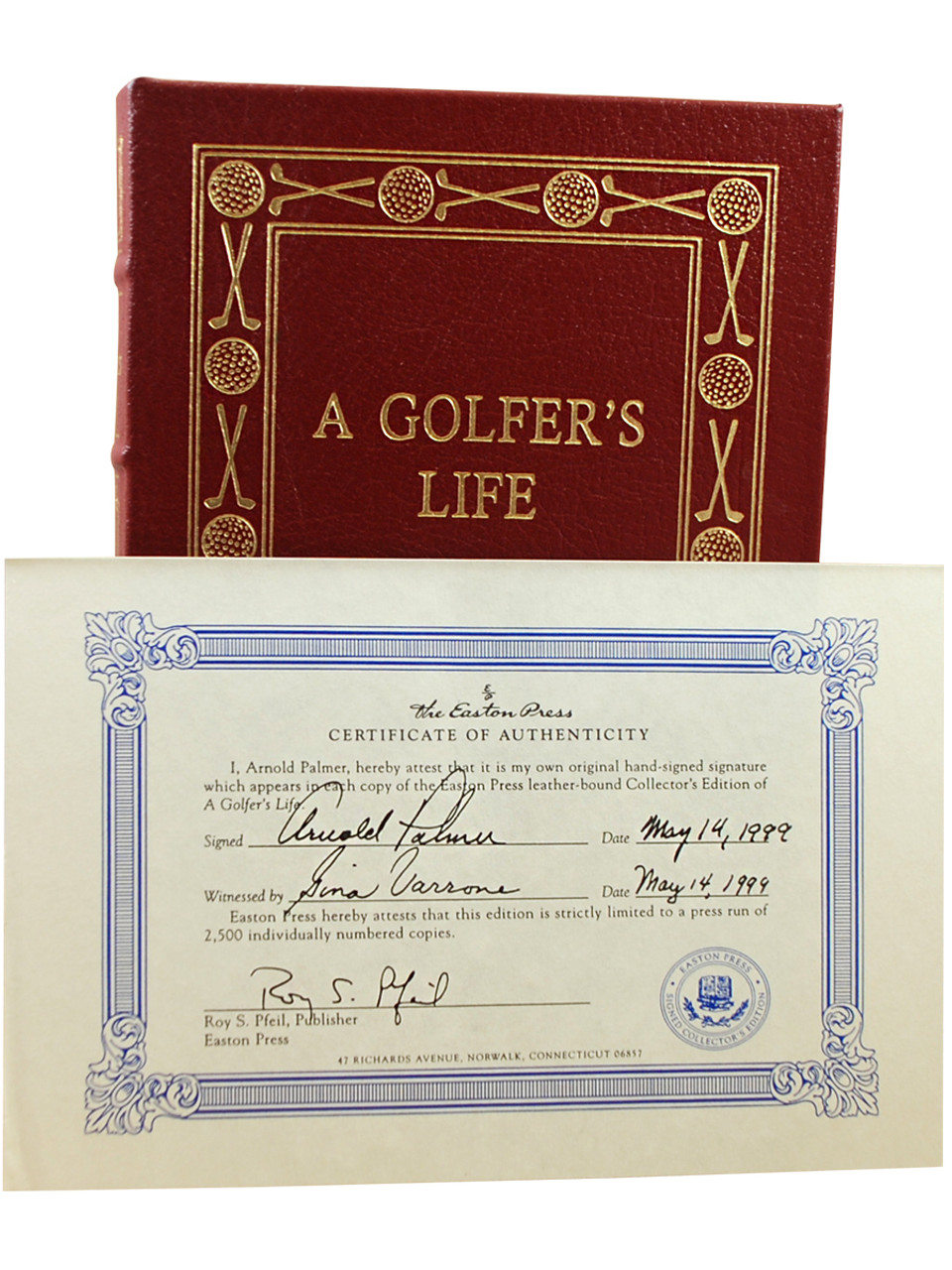 Personally signed by Arnold Palmer directly onto the limitation page.

Easton Press, Norwalk, CT. 1999. "A Golfer's Life" by Arnold Palmer with James Dodson. Signed limited edition. This edition is luxuriously bound in full genuine leather. Includes original COA. No dust-jacket as issued. This is number 1,818 of only 2,500 printed in this special collector's edition. The perfect gift for the golfer.

Guarantee of Signature Authenticity: Easton Press COA (certificate of authenticity) guarantees the signature to be authentic. The COA is also signed and dated by Palmer along with a witness. You will get the COA that was originally included with this book. Arnold Palmer has signed this book with his own hand. It is not a signature stamp or from an auto-pen.
Book Description
There has never been a golfer to rival Arnold Palmer. To the legions of golf fans around the world, Palmer is a charismatic hero, the winner of sixty-one tournaments on the PGA Tour and still going strong on the Senior PGA Tour. But behind the legend, there is the private Palmer--a man of wit, compassion, loyalty, and true grit in the face of personal adversity.

Writing with the humor and candor that are as much his trademark as his unique golf swing, Palmer narrates the deeply moving story of his life both on and off the links. He recounts the loving relationship he shared with his father, "Deacon" Palmer, the course superintendent and head professional at the Latrobe Country Club where young Arnie developed his game, his friendships and rivalries with golf greats, his enduringly happy marriage with Winnie, his legendary charges to triumph and titanic disasters, and his valiant battle against cancer and remarkable recovery.

ARNOLD PALMER is commander-in-chief of "Arnie's Army," the world's largest noncombative force. Among his 61 PGA Tour victories, Ps also analmer won the Masters four times, the U.S. Open once, and the British Open twice. A gifted athlete, Palmer i accomplished entrepreneur, a skilled aviator, a prominent advertising spokesperson, a talented golf course designer, and the author of four books about the game. He resides in Latrobe, Pennsylvania.

Arnold Daniel Palmer (born September 10, 1929) is an American golfer who has won numerous events on both the PGA TourChampions Tour, dating back to 1955. Nicknamed "The King," Arnold was born in Latrobe, Pennsylvania. Palmer is not generally regarded as the greatest player in the history of men's professional golf, but he is arguably golf's most popular star and its most important trailblazer because he was the first star of the sport's television age, which began in the 1950s. and

Palmer's charisma was a major factor in establishing golf as a compelling television event in the 1950s and 1960s, setting the stage for the popularity it enjoys today. His first major championship win at the 1958 Masters cemented his position as one of the leading stars in golf, and by 1960 he had signed up as pioneering sports agent Mark McCormack's first client. In later interviews, McCormack listed five attributes that made Palmer especially marketable: his good looks; his relatively modest background (his father was a greenkeeper before rising to be club professional and Latrobe was a humble club); the way he played golf, taking risks and wearing his emotions on his sleeve; his involvement in a string of exciting finishes in early televised tournaments; and his affability.

Palmer's most prolific years were 1960-1963, when he won 29 PGA Tour events in four seasons. In 1960, he won the Hickok BeltSports Illustrated magazine's "Sportsman of the Year" award. He built up a wide fan base, often referred to as "Arnie's Army", and in 1967 he became the first man to reach one million dollars in career earnings on the PGA Tour. By the late 1960s Jack Nicklaus had acquired clear ascendancy in their rivalry, but Palmer won a PGA Tour event every year up to 1970, and in 1971 he enjoyed a revival, winning four events. as the top professional athlete of the year and

Palmer won the first World Match Play Championship in England, an event which was originally organized by McCormack to showcase his stable of players. Their partnership was one of the most significant in the history of sports marketing. Long after he ceased to win tournaments, Palmer remained one of the highest earners in golf due to his appeal to sponsors and the public.

In 2004, he competed in The Masters for the last time, marking his 50th consecutive appearance in that event. After missing the cut at the 2005 U.S. Senior Open by twenty-one shots he announced that he would not enter any more senior majors. He retired from tournament golf on October 13 2006, when he withdrew from the Champions Tours' Administaff Small Business Classic. Palmer's legacy was reaffirmed by an electrifying moment during the 2004 Bay Hill Invitational. Standing over 200 yards from the water-laden 18th green, Palmer, who is known for his aggressive play, lashed his second shot onto the green with a driver. The shot thrilled his loyal gallery and energized the excitable Palmer. He turned to his grandson and caddie, Sam Saunders, and gave him a prolonged shimmy and playful jeering in celebration of the moment. after four holes due to dissatisfaction with his own play. He played the remaining holes but did not keep score.

Very Near Fine with a tiny mark to the spine and a couple of superficial marks to the gilded page edges. Unread book with square and tight spine. No attached bookplates or indication of any removed. Clean boards. Free of any other marks, writings, or stamps. Photos of actual item.