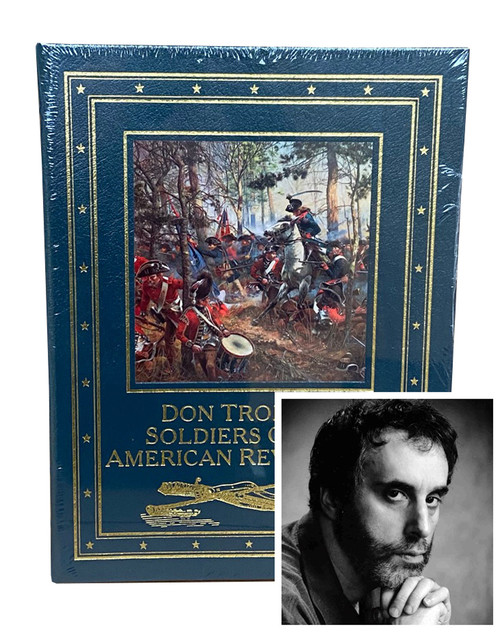 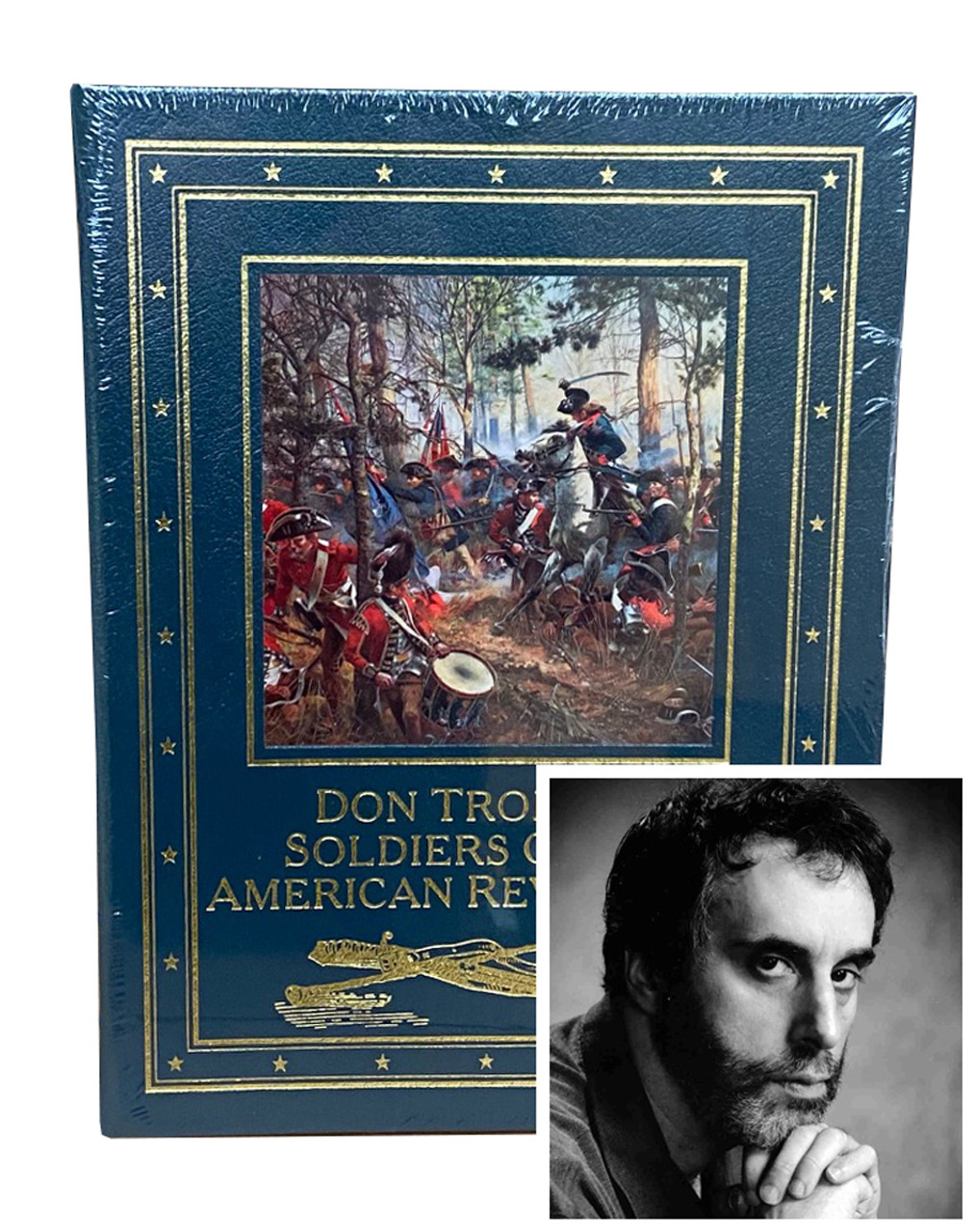 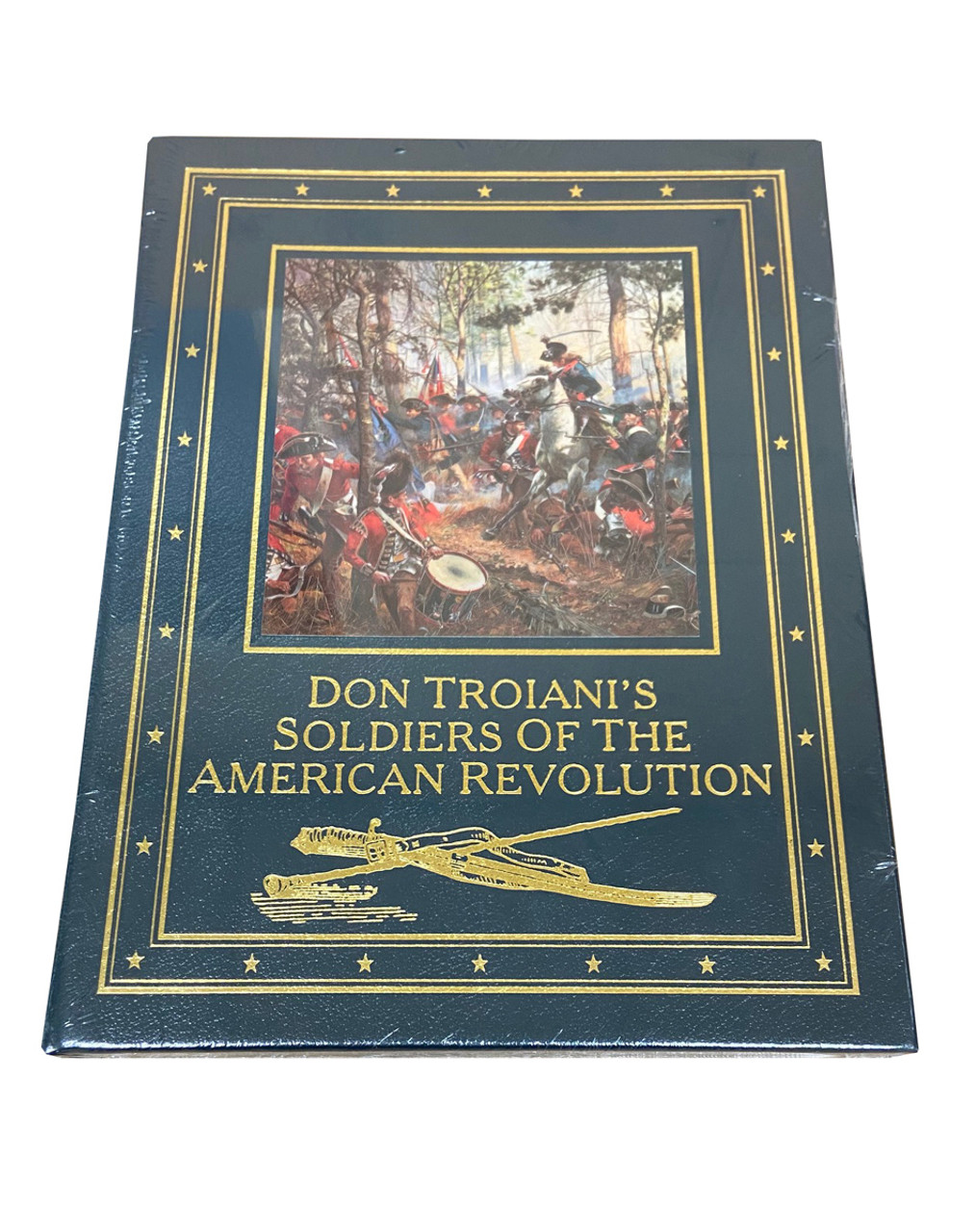 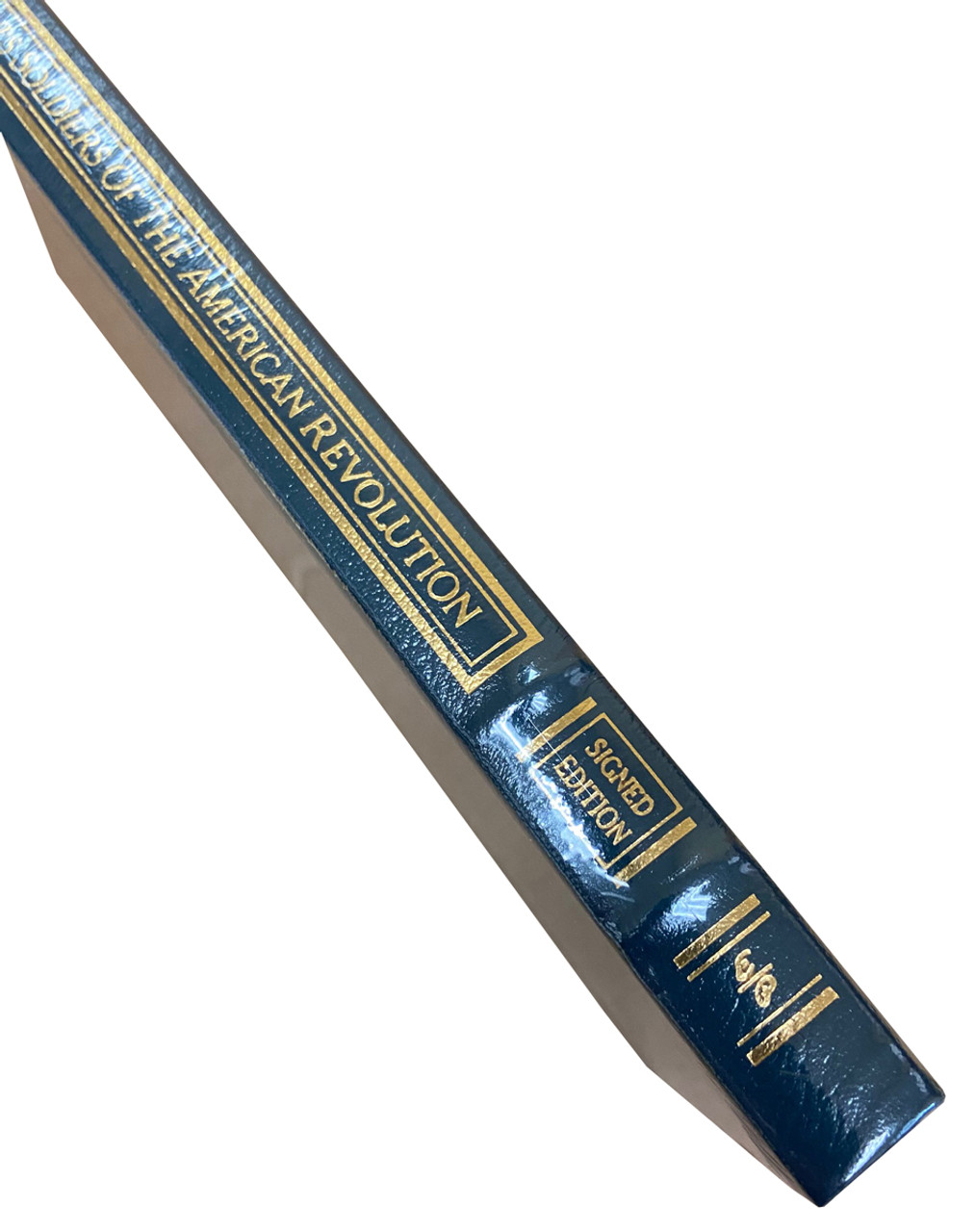 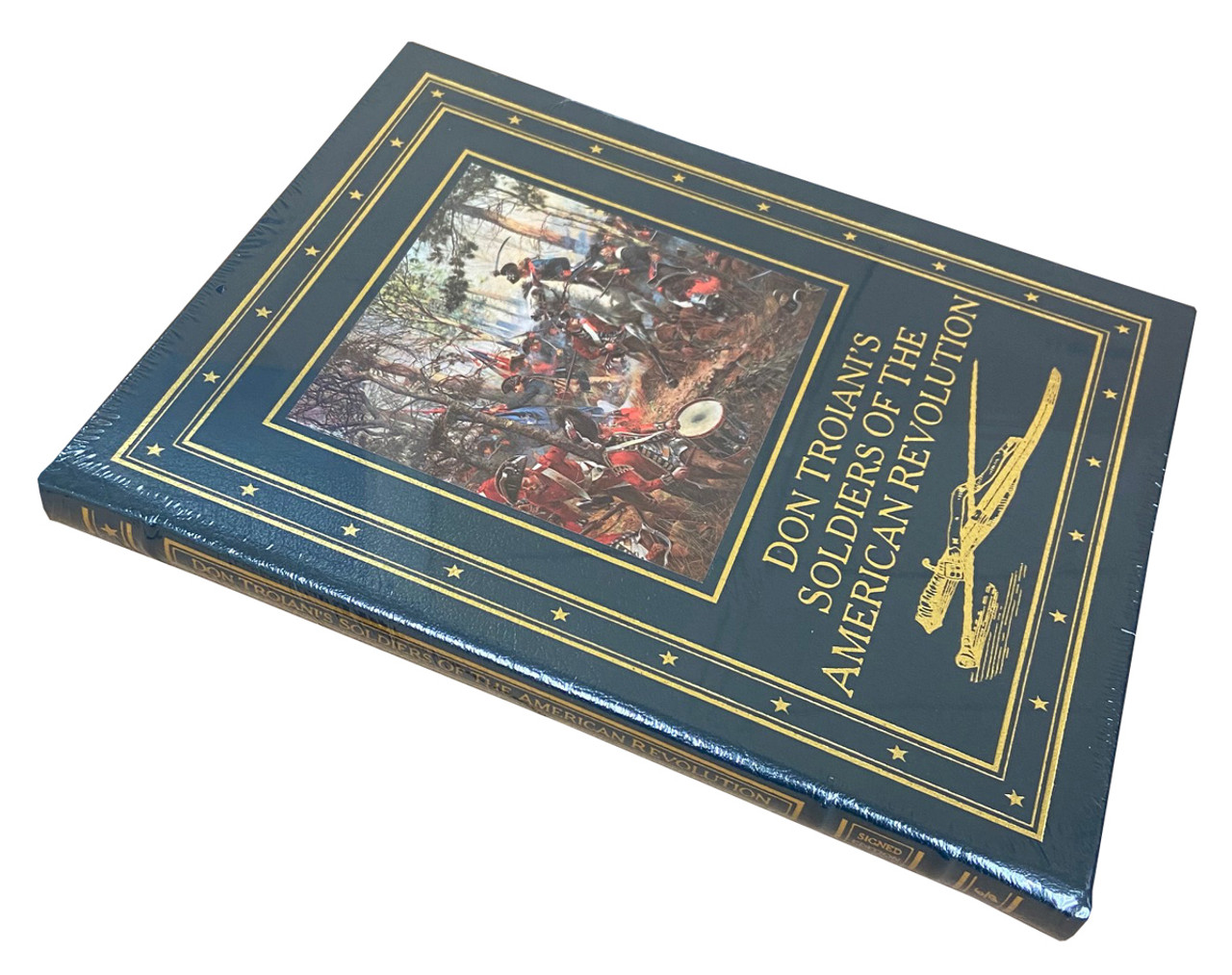 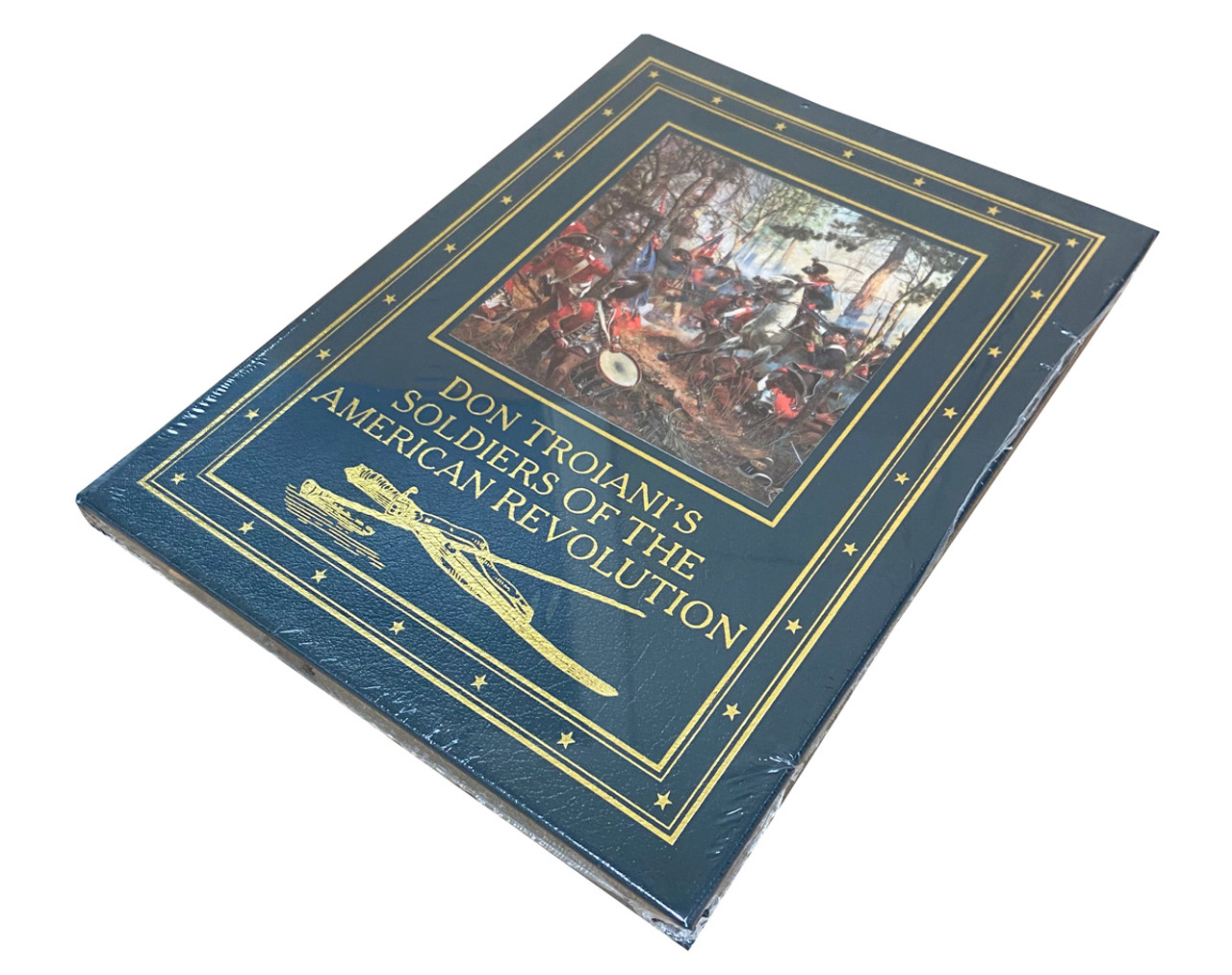 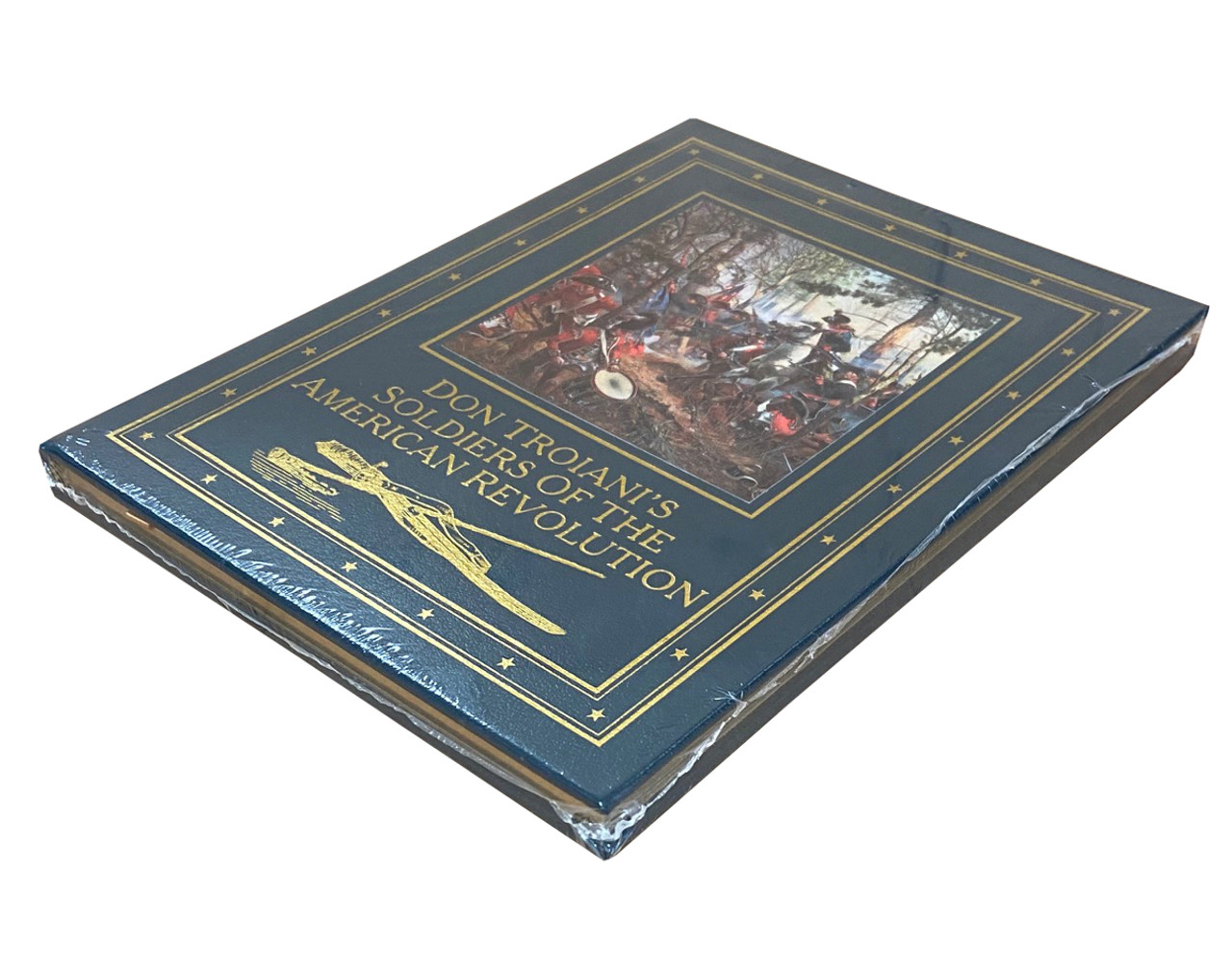 This deluxe leather bound collector's edition has been personally signed by the author, Don Troiani 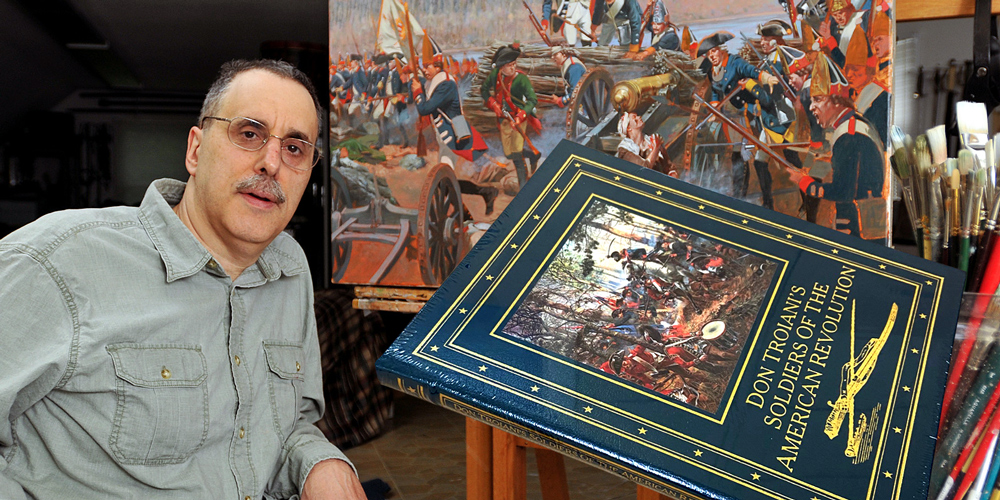 Vibrant color paintings illustrate soldiers and battles of the war.

Color photos of seldom-seen period artifacts such as uniforms, weapons, and other equipment.

In this collection, renowned artist Don Troiani teams up with leading artifact historian James L. Kochan to present the American Revolution as it has existed only in our imaginations: in living color.

From Bunker Hill to Yorktown, from Washington to Cornwallis, from the Minute Men to the Black Watch, these pages are packed with scenes of grand action and great characters, recreated in the vivid blues and reds that defined the Revolutionary era. Troiani's depictions of these legendary fife-and-drum soldiers are based on firsthand accounts and, wherever possible, surviving artifacts. Scores of color photographs of these objects--many of them from private collections and seen here for the very first time--accompany the paintings. Items range from muskets and beautifully ornate swords to more unique pieces such as badges with unit insignia or patriotic slogans and Baron von Steuben's liquor chest.

More than just a glimpse into a world long past, this is the closest the modern reader can get to experiencing the Revolutionary War firsthand.

Don Troiani attended the Pennsylvania Academy of Fine Arts and New York City's Art Students League. His artwork is in numerous major collections, including American Heritage magazine, the National Park Service, the U. S. Military Academy at West Point, the Pentagon, and the Smithsonian Institute.

Don Troiani attended the Pennsylvania Academy of Fine Arts and New York City's Art Students League. His artwork is in numerous major collections, including American Heritage magazine, the National Park Service, the U. S. Military Academy at West Point, the Pentagon, and the Smithsonian Institute.

James L. Kochan, former curator at Morristown National Historical Park and director of collections at Mount Vernon, is considered by many to be the eminent authority on American military dress and accoutrements from 1754 to 1848. He is coauthor of Don Troiani's Soldiers in America.

Don Troiani is a soul lost in time; a twenty-first century artist to whom the life of the common soldier of the American Revolution through the Civil War is as familiar and vivid as the surroundings of his Connecticut studio. While there are other painters who have turned their attention to historical art, none have done so with the enthusiasm, insight and historical accuracy of this accomplished recorder of drama and detail.

For more information on Don's artwork visit :http://www.dontroiani.com/ or check his facebook page at https://www.facebook.com/Don-Troiani-Historical-Artist-104952196246190/

In the spirit of presenting historical truth through art, Don Troiani has personally set uncompromising standards of excellence and authenticity in his field that few others can equal. Models are chosen with the greatest care to achieve the proper look of the men in Colonial and Victorian America. The garb and gear of each figure are painstakingly researched. Period settings are found and researched, sometimes sending the artist hundreds of miles from home to examine battlefields and structures firsthand. Because of the great amount of research that goes into one of his works, it is often years between a painting's conception and the actual moment the brush is put to canvas.

Indeed, Troiani's lifelong focus on military heritage enables him to present that subject with credibility second to none. For four decades he has methodically built one of the greatest private artifact collections of Civil War, 1812 and Revolutionary War, World War II uniforms, equipage, insignia and weapons which he calls on to add the unique dimension of realism he is so well known for. An expert researcher with a personal military library of thousands of volumes, he is assisted in his search for the truth by a select network of advanced collectors, curators and historians whom he corresponds with regularly and who open their own collections and archives to him.

Hollywood has enlisted him as consultant on "Civil War Uniforms and Equipage" for the acclaimed feature film "Cold Mountain" starring Nicole Kidman, Rene Zellweger and Jude Law for which he received screen credit. Also in " Cold Mountain , The Journey from book to film." Troiani has also been military advisor (and made appearances) on all 52 episodes of A&E and History Channel's "Civil War Journal" and the miniseries "The American Revolution". Television appearances on "Missing Reward", "Incurable Collector", and "Hunt for Amazing Treasures" are also among his credits.

Because of his extensive knowledge of military artifacts, Troiani is regularly contacted by major museums and collectors from across the country that greatly value his firsthand experience. He has appraised collections in the Connecticut State Capitol, Connecticut State Library, Atlanta History Center (Atlanta Historical Society), and Confederate Memorial Hall, New Orleans, auction houses and private individuals. Numerous items from his collection have appeared in the acclaimed Time-Life "Echoes Of Glory" series on the Civil War and countless other publications. Other of his artifacts have been loaned for the exhibition at the Smithsonian Institution, The West Point Museum, Delaware Historical Society, Connecticut Museum of History, Pamplin Historical Park, Virginia Historical Society and the National Park Service Visitors Center in Gettysburg, PA.

"You can look at a picture of an artifact for days and still not know it. But examining it in your own hands reveals its texture, its substance and how it works," explains Troiani. Many times he has had costly reproductions of rare or delicate original items hand-crafted so they can be used actively by his models

Born in New York City in 1949, Troiani's future as a premier interpreter of history seemed pre-destined. His father, an accomplished commercial artist, encouraged his talented son and kept him supplied with paper, paint and direction. His mother, a successful antiques dealer, nurtured her son's interest in the past and showed him the importance of having a three-dimensional view of history. By the time he began perfecting his skills at the Pennsylvania Academy Of Fine Arts and New York City's Art Students League, his role as a consummate realist was already clear.

He has served on the advisory board to the Anne Brown Library, Providence, RI and Civil War Trust.

"His history is filled with action, color and excitement. It is certainly a valid subject for an artist to pursue as long as it is approached in a thoughtful and thorough way, "Troiani said. "There has been too much distortion over the years. I believe the more accurate the presentation is, the clearer our image will be of our heritage. It is a far better way to honor our ancestors." With this sense of "mission," Don Troiani will no doubt continue to capture a crucial period in our nation's past with style, emotion and unrivaled accuracy.