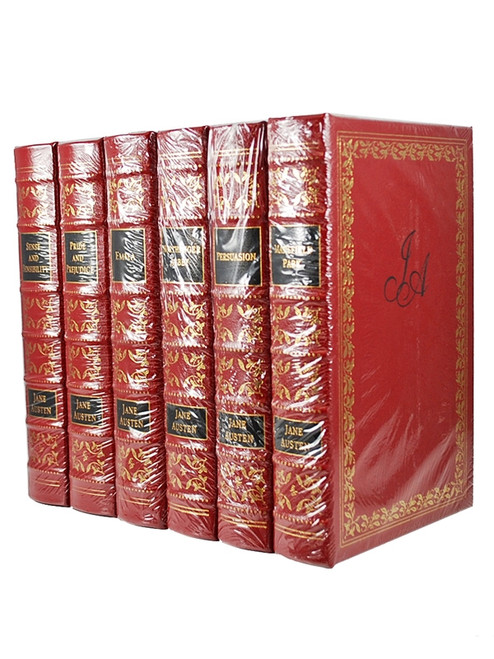 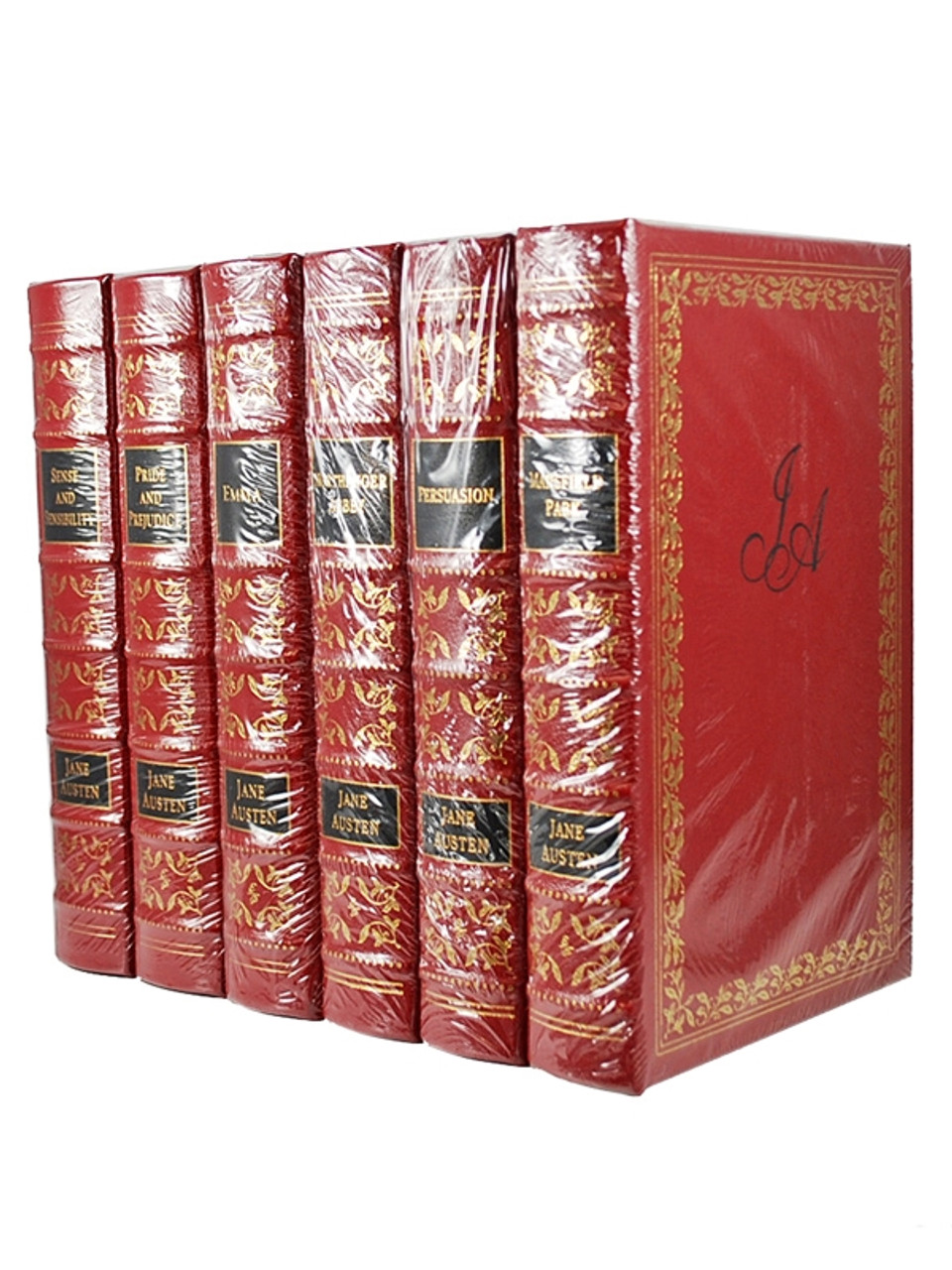 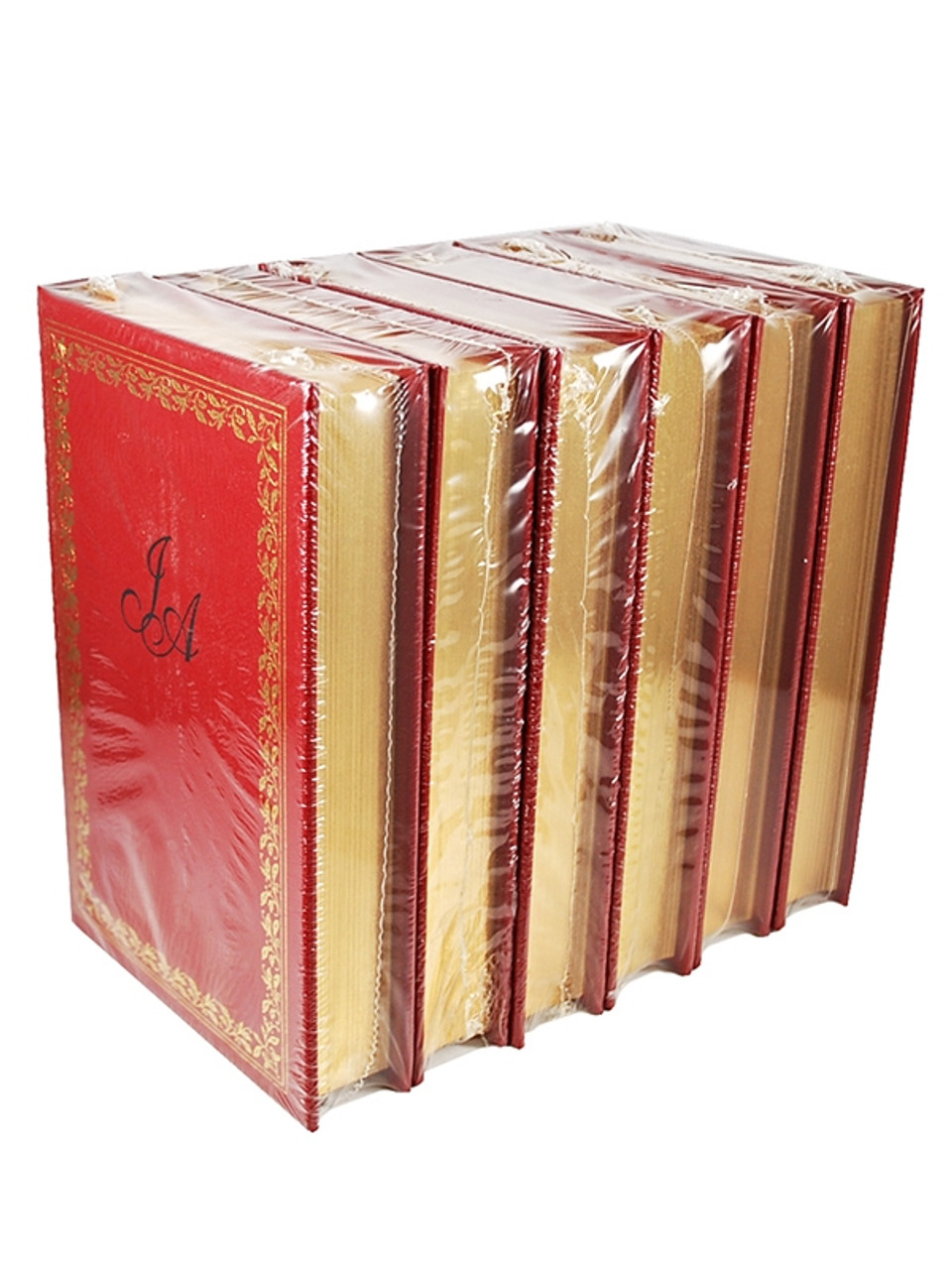 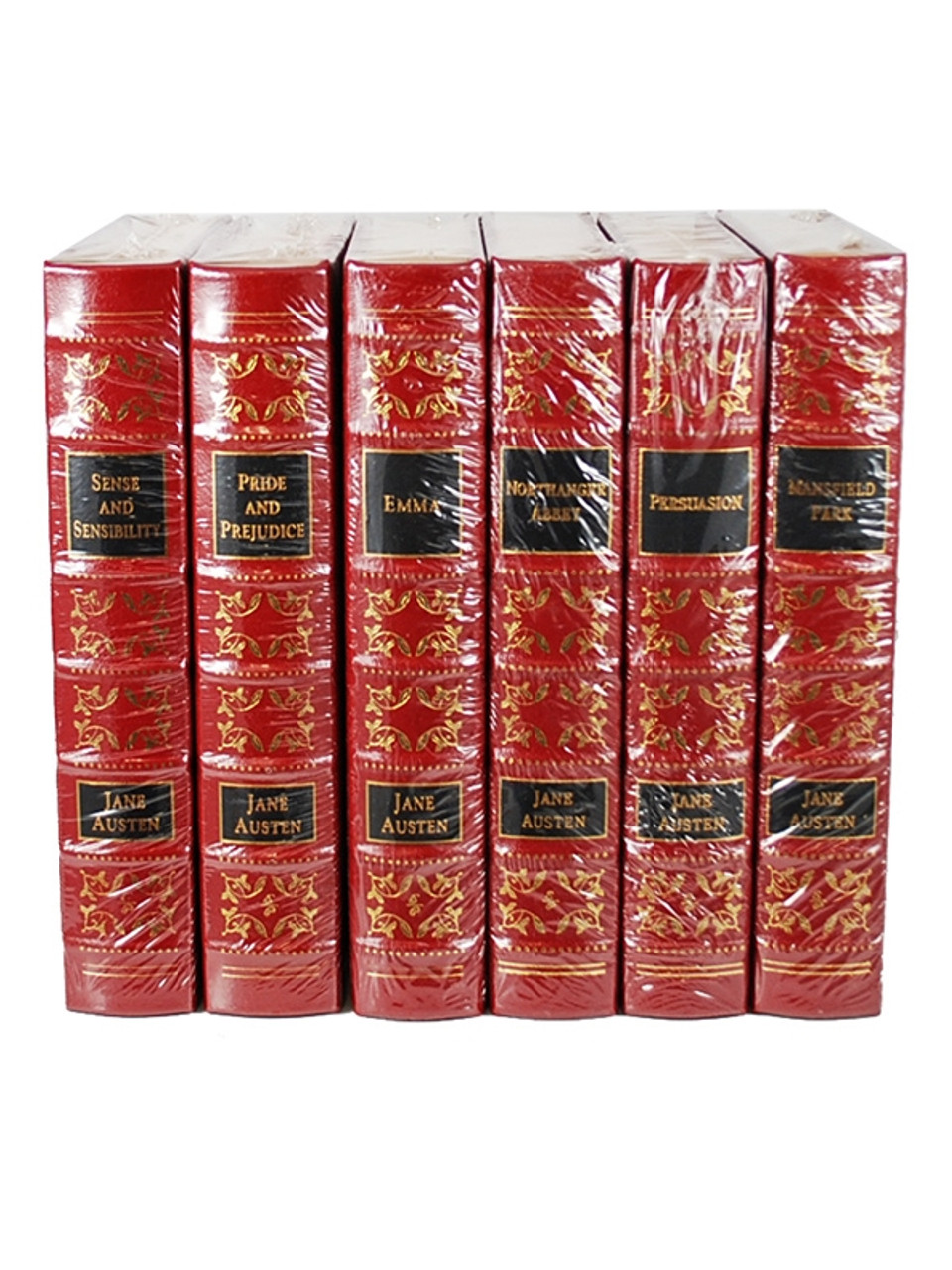 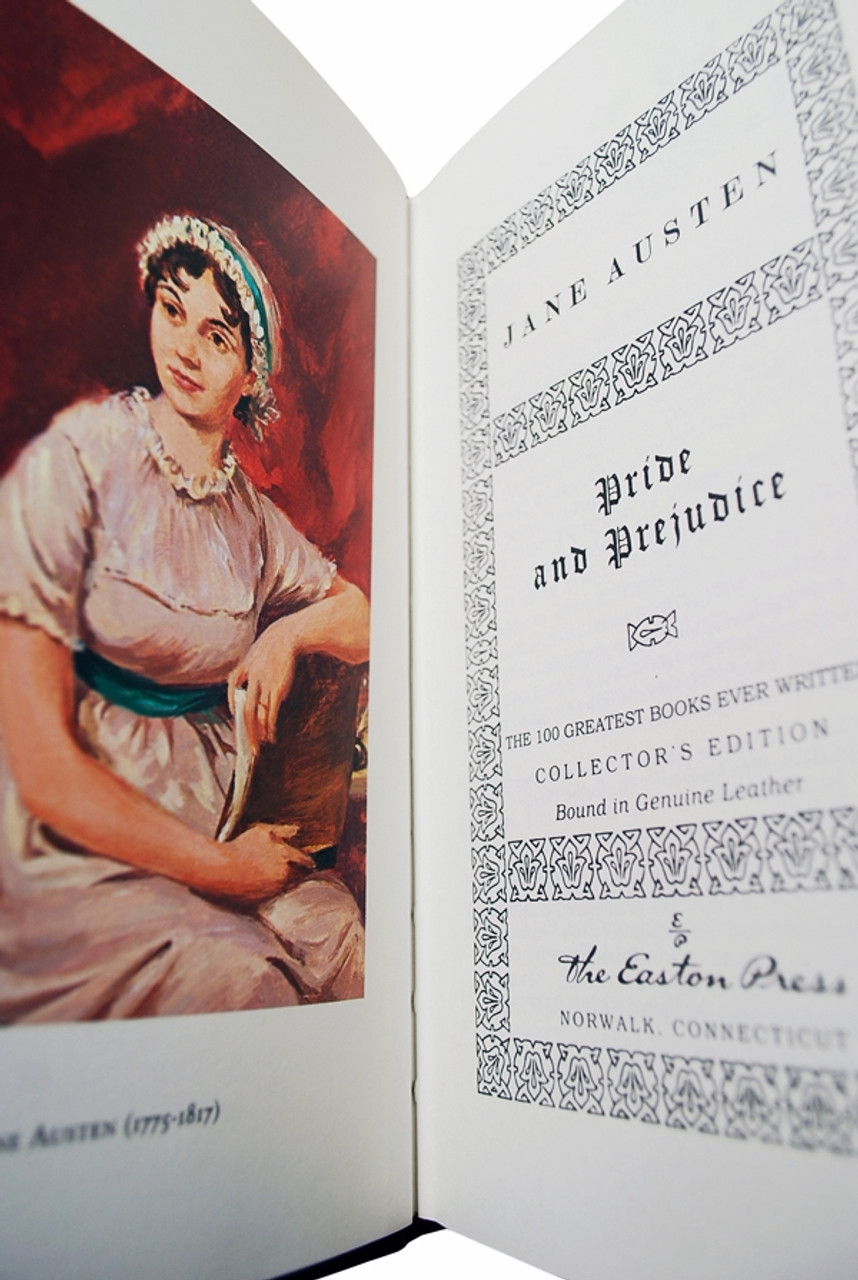 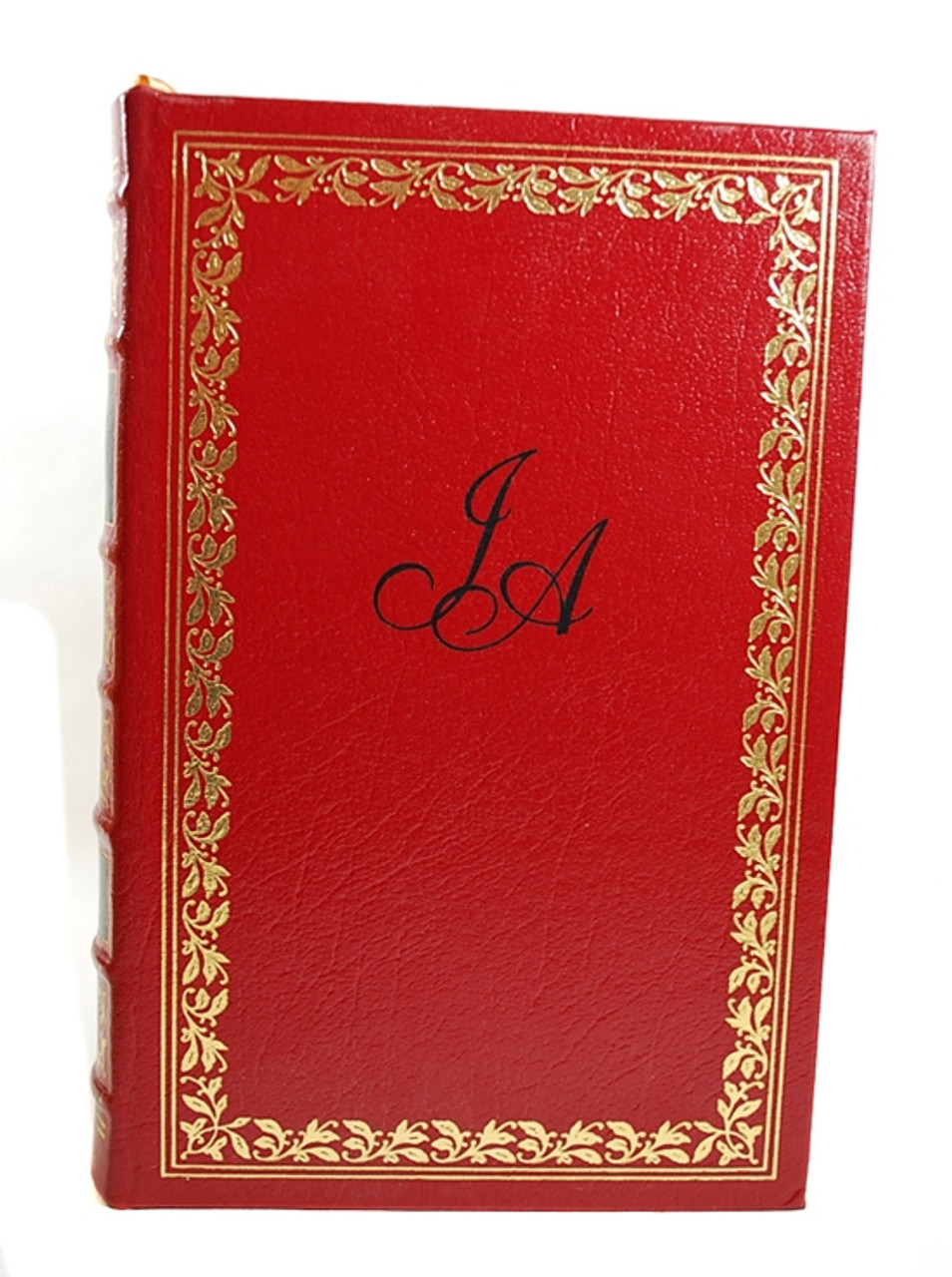 
The ideal set for the collector of exceptional classic literature. Jane Austen is a world renowned English author and, despite her having lived centuries ago, she commands a legion of fans around the world numbering in the millions today.


This collection includes the following titles:

The works of Jane Austen have long been considered some of the finest additions to the body of American literature. Austen's beloved heroines have enchanted and inspired generations. Now, you can add the work of this highly notable and influential author to your library in its best form, with this six-volume set from Easton Press. Beautifully illustrated by C.E. and H.M. Brock.

This complete set includes Pride and Prejudice, Sense and Sensibility, Persuasion, Emma, Mansfield Park, and Northanger Abbey, every completed novel by Jane Austen. Each volume is infused with the exquisite quality you expect from Easton Press editions.

Own a valuable piece of literary history with this stunning complete collection of the works of Jane Austin, from the master book crafters at Easton Press.

Jane Austen's delightfully scathing satire on class, pride, and proper behavior is as beloved today as it was when first published in 1813. The long road that the quick-witted, sharp-tongued Elizabeth Bennet and the haughty Darcy travel from mutual disdain to unfulfilled longing and finally to love and marriage is beset with obstacles in the form of Elizabeth's insufferable mother, irrepressible younger sister, and Darcy's own secret pain. In Pride and Prejudice, Austen has captured not only the frivolous sensibilities of early-nineteenth-century provincial England, but also the hearts and minds of anyone who has loved outside of social expectations and aspired to a happiness beyond mere propriety.

Sense and Sensibility is the first published novel by Jane Austen. Originally published under the pseudonym "A Lady," Sense and Sensibility tells the story of the Dashwood sisters, Elinor and Marianne, who, upon the death of their father, are left in reduced circumstances to live on the country estate of a distant relative. At Barton Park, the Dashwood sisters engage in romances with the reserved Edward Ferrars, the dashing yet fickle Mr. Willoughby, and the gentlemanly Colonel Brandon, and eventually find the fulfillment of their romantic yearnings. Sense and Sensibility was among the first realistic romance novels to be published and shows Austen's skill at developing perceptive yet sympathetic characters. It has been translated into numerous languages and adapted for the stage and screen.

Persuasion is Jane Austen's last completed novel. She began it soon after she had finished Emma, completing it in August, 1816. She died, aged 41, in 1817, but Persuasion was not published until 1818. Persuasion is connected with Northanger Abbey not only by the fact that the two books were originally bound up in one volume and published together two years later, but also because both stories are set partly in Bath, a fashionable health resort with which Jane Austen was well acquainted, having lived there from 1801 to 1805.

Emma, by Jane Austen, is a novel about youthful hubris and the perils of misconstrued romance. The novel was first published in December 1815. As in her other novels, Austen explores the concerns and difficulties of genteel women living in Georgian-Regency England; she also creates a lively comedy of manners among her characters. 5. Mansfield Park

Raised at Mansfield Park by her rich aunt and uncle, Fanny Price does not have high hopes or great marital prospects. When the fashionable and exciting siblings Henry and Mary Crawford arrive to stay near Mansfield Park, Fanny and her cousins' lives are thrown into disarray with romantic entanglements and personal jealousies.

Published in 1814, Mansfield Park is considered to be the most controversial of Jane Austen's novels, as Fanny Price is a less sympathetic character and Fanny's family is depicted as coming from a lower social class than is typical in Austen's other works.

At seventeen, Catherine Morland is invited to accompany the Allens to Bath for the winter season. In Bath, Catherine meets and befriends the Tilneys and the Thorpes. Through her relationships with these families, Catherine learns the true value of love and friendship, as Henry Tilney and John Thorpe vie for her affections and the true character of her friend, Isabella, is revealed. Although it was the first of Jane Austen's novels to be completed for publication, Northanger Abbey was not published until after the author's death in 1817. It had previously been sold to a London bookseller in 1803 who had decided not to publish the work. Austen's brother re-purchased Northanger Abbey in 1817, at which point it was revised and published at the end of that year.