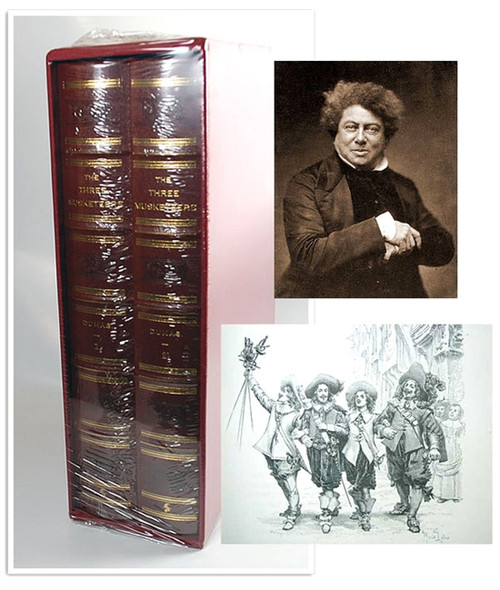 A Luxurious 2 Volume Leather Bound Set of only 400 Produced

Both a literary and artistic jewel, these over-sized volumes (7 1/2" x 11 1/4") are bound in full premium red leather, with a raised "hubbed" spine embossed with genuine 22kt gold, Florentine stamping on the inside of the covers, and including the original cover design from the 19th Century edition, beautifully stamped in two colors. Printed on acid-neutral paper, with Smyth-sewn pages and printed marbled endsheets, it includes a matching red cloth slipcase and the publisher's original box and bookplates.

Each of the 400 hand-numbered copies comes with a numbered Certificate of Authenticity from Easton Press. One of Dumas' most celebrated works, this two-volume showpiece makes an outstanding library addition for the savvy collector of illustrated books.

Condition: As New, sealed in the original shrink-wrap

The Three Musketeers is a novel by Alexandre Dumas, first serialized in MarchJuly 1844. Set in the 17th century, it recounts the adventures of a young man named d'Artagnan after he leaves home to travel to Paris, to join the Musketeers of the Guard. D'Artagnan is not one of the musketeers of the title; those are his friends Athos, Porthos, and Aramis, inseparable friends who live by the motto "all for one, one for all" ("un pour tous, tous pour un"), a motto which is first put forth by d'Artagnan.

The story of d'Artagnan is continued in Twenty Years After and The Vicomte of Bragelonne: Ten Years Later. Those three novels by Dumas are together known as the d'Artagnan Romances.

The Three Musketeers was first published in serial form in the newspaper Le Siècle between March and July 1844.

When Alexandre Dumas wrote The Three Musketeers he also was a practising fencer and like many other French gentlemen of his generation he attended the schools for Canne de combat and Savate of Michel Casseux, Charles Lecour and Joseph Charlemont (who had been a regular fencing instructor in the French army).