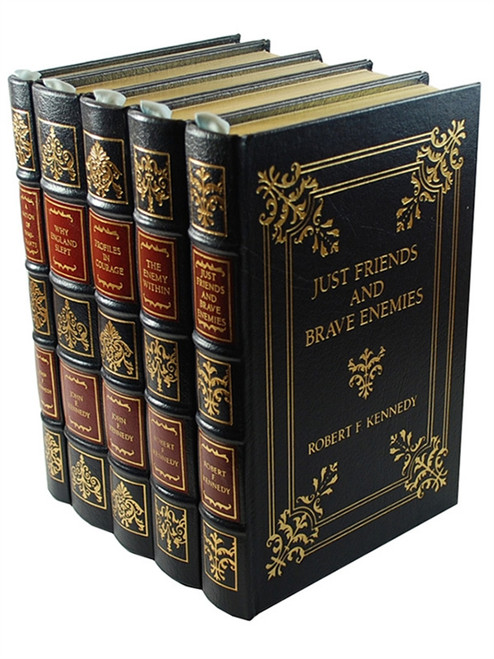 A magnificent leather bound heirloom set that would make a wonderful addition to your library.


Included in this collection are the following five volumes:

Written by John F. Kennedy in 1940 when he was still in college and reprinted in 1961 when he was president, this book is an appraisal of the tragic events of the thirties that led to World War II. It is an account of England's unpreparedness for war and a study of the shortcomings of democracy when confronted by the menace of totalitarianism.

Written in 1955 by the then junior senator from the state of Massachusetts, John F. Kennedy's Profiles in Courage served as a clarion call to every American. The inspiring true accounts of eight unsung heroic acts by American patriots at different junctures in our nation's history, Kennedy's book became required reading, an instant classic, and was awarded the Pulitzer Prize. Now, a half-century later, it remains a moving, powerful, and relevant testament to the indomitable national spirit and an unparalleled celebration of that most noble of human virtues.

This special "P.S." edition of Profiles in Courage commemorates the fiftieth anniversary of the book's publication. Included in this new edition, along with vintage photographs and an extensive author biography, are Kennedy's correspondence about the writing project, contemporary reviews of the book, a letter from Ernest Hemingway, and two rousing speeches from recipients of the Profile in Courage Award.


The Enemy Within - Robert F. Kennedy

This is the authoritative, compelling account of one of the most famous, consummate, and effective Senate investigations in modern Congressional history. From 1956 to 1959 the Senate Select Committee on Improper Activities in the Labor or Management Field (chaired by Sen. McClellan and guided by chief counsel Robert Kennedy) heard more than 1500 witnesses and uncovered a shocking story, proving that labor leaders, management, the underworld, and public officials, sometimes in combination, sometimes separately, had worked to cheat and intimidate the rank-and-file union members.

These revelations resulted in convictions, tough labor reform legislation, and a public awareness of organized crimes insidious and corrosive influence. Writing crisply, with indignation but also with humor, Kennedy focuses on how unions are bought, sold, and sometimes stolen; how democracy actually operated in Jimmy Hoffas captive unions and what happened to the men who dared to oppose him; how Hoffa was tried on charges of attempting to plant a spy in the McClellan Committee; how an investigating committee works; how the Committee resisted external pressures, threats, and ploys to derail its efforts; and more. The Enemy Within is illuminated by firsthand knowledge and charged with the fire of personal conviction. With a new introduction by the chairman of the Robert F. Kennedy Memorial, this book remains a vivid testament to Robert Kennedys early commitment to equal justice for leaders and laborers alike.

Throughout his presidency, John F. Kennedy was passionate about the issue of immigration reform. He believed that America is a nation of people who value both tradition and the exploration of new frontiers, people who deserve the freedom to build better lives for themselves in their adopted homeland. This modern edition of his posthumously published, timeless workwith a new introduction by Senator Edward M. Kennedy and a foreword by Abraham H. Foxman, national director of the Anti-Defamation Leagueoffers the late president's inspiring suggestions for immigration policy and presents a chronology of the main events in the history of immigration in America. As continued debates on immigration engulf the nation, this paean to the importance of immigrants to our nation's prominence and success is as timely as ever.

Robert Kennedy has put together a catalogue of his 1962 30,000 mile world tour, made up of travel notes, speeches and the transcript of tape recordings of student question-and-answer exchanges. This is a terse, forthright presentation of Mr. Kennedy's impressions of the people and nations he visited, with occasional humor and personal marginalia. There are several pocket-sized profiles of the world, leaders he met, including Prime Minister Ikeda of Japan, President Sukarno of Indonesia, Mayor Willy Brandt and Chancellor Adenauer of Germany, and France's De Gaulle. On less formal occasions, he is both host and guest of university students, labor leaders and Communist hecklers. Transcripts of these touch-and-go sessions are the backbone of the book and reveal the mind and feelings of the people along Mr. Kennedy's route far more than the state meetings with major political figures. From the record this book gives, Mr. Kennedy handles himself, the prestige of the United States, as well as many , loaded questions with tact and honesty. In the final chapter he summarizes his impression of America's image, distorted or clear, in both East and West, and what changes he feels can and must be made.