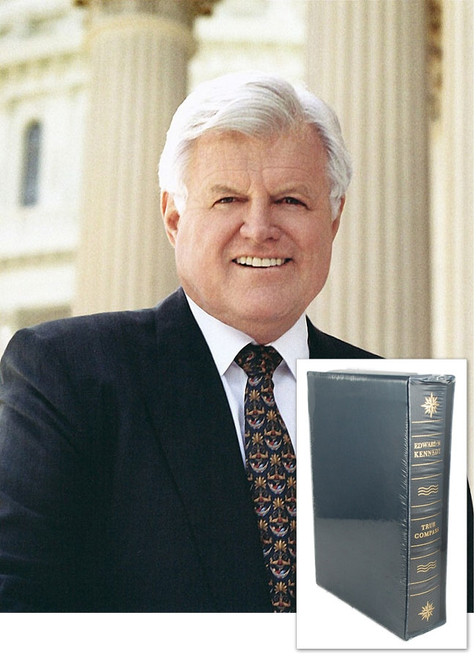 The book contains a FACSIMILE AUTOGRAPH by the author.

This leather-bound version contains extra family photos not available in the hardcover edition. “This is a substantial book and we think this leather-bound limited edition is the ultimate collectors’ edition for anyone interested in the Kennedys and passionate about American history,” said Cary Goldstein, a spokesman for Twelve. “Senator Kennedy will be the only one of that generation who will really have had the chance to publish his memoirs and this is a book like no other.”


Twelve is an imprint of Grand Central Publishing.

Edward M. Kennedy is widely regarded as one of the great Senators in the nation's history. He is also the patriarch of America's most heralded family. In this landmark autobiography, five years in the making, Senator Kennedy speaks with unprecedented candor about his extraordinary life. The youngest of nine children born to Joseph P. Kennedy and Rose Fitzgerald Kennedy, he came of age among siblings from whom much was expected. As a young man, he played a key role in the presidential campaign of his brother, John F. Kennedy. In 1962, he was elected to the U.S. Senate, where he learned how to become an effective legislator.

His life has been marked by tragedy and perseverance, a love for family and an abiding faith. He writes movingly of his brothers and their influence on him; his years of struggle in the wake of their deaths; his marriage to the woman who changed his life, Victoria Reggie Kennedy; his role in the major events of our time (from the civil rights movement to the election of Barack Obama); and how his recent diagnosis of a malignant brain tumor has given even greater urgency to his long crusade for improved health care for all Americans. Written with warmth, wit, and grace, True Compass is Edward M. Kennedy's inspiring legacy to readers and to history. (2009)

Edward Moore "Ted" Kennedy (February 22, 1932 – August 25, 2009) was an American politician who served as a U.S. Senator from Massachusetts for almost 47 years, from 1962 until his death in 2009. A member of the Democratic Party and the Kennedy political family, he was the second most senior member of the Senate when he died and is the third-longest-continuously-serving senator in United States history. Kennedy was a brother of President John F. Kennedy and U.S. Attorney General and U.S. Senator Robert F. Kennedy—both victims of assassination—and was the father of Congressman Patrick J. Kennedy.

Ted Kennedy was 30 years old when he first entered the Senate following a November 1962 special election in Massachusetts to fill the vacant seat previously held by his brother John, who had taken office as the president. He was elected to a full six-year term in 1964 and was later re-elected seven more times. The Chappaquiddick incident in 1969 resulted in the death of his automobile passenger, Mary Jo Kopechne. Kennedy pleaded guilty to a charge of leaving the scene of an accident and later received a two-month suspended sentence. The incident and its aftermath hindered his chances of ever becoming president. His only attempt, in the 1980 election, resulted in a Democratic primary campaign loss to the incumbent president Jimmy Carter.

Kennedy was known for his oratorical skills. His 1968 eulogy for his brother Robert and his 1980 rallying cry for modern American liberalism were among his best-known speeches. He became recognized as "The Lion of the Senate" through his long tenure and influence. Kennedy and his staff wrote more than 300 bills that were enacted into law. Unabashedly liberal, Kennedy championed an interventionist government that emphasized economic and social justice, but he was also known for working with Republicans to find compromises. Kennedy played a major role in passing many laws, including the Immigration and Nationality Act of 1965, the National Cancer Act of 1971, the COBRA health insurance provision, the Comprehensive Anti-Apartheid Act of 1986, the Americans with Disabilities Act of 1990, the Ryan White AIDS Care Act, the Civil Rights Act of 1991, the Mental Health Parity Act, the S-CHIP children's health program, the No Child Left Behind Act, and the Edward M. Kennedy Serve America Act. During the 2000s, he led several unsuccessful immigration reform efforts. Over the course of his Senate career, Kennedy made efforts to enact universal health care, which he called the "cause of my life." By the later years of his life, Kennedy had come to be viewed as a major figure and spokesman for American progressivism.

In 2008, Kennedy suffered a seizure and was diagnosed with a malignant brain tumor, which limited his appearances in the Senate. He died of the cancer at age 77 on August 25, 2009, at the Kennedy Compound in Hyannis Port, Massachusetts. He is buried at Arlington National Cemetery near the graves of his assassinated brothers.

VERY FINE GUARANTEED. Very Fine condition without any flaws, sealed in the shrink-wrap. There are no markings, writings, or stampings. No attached bookplates or indication of any removed. A well cared for book, protected from any potential damage. Square and tight spine. Sharp corners that are not bumped. A wonderful bright clean copy.