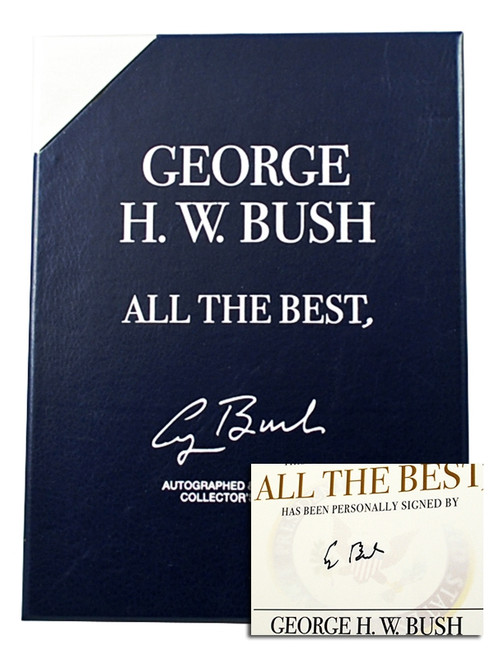 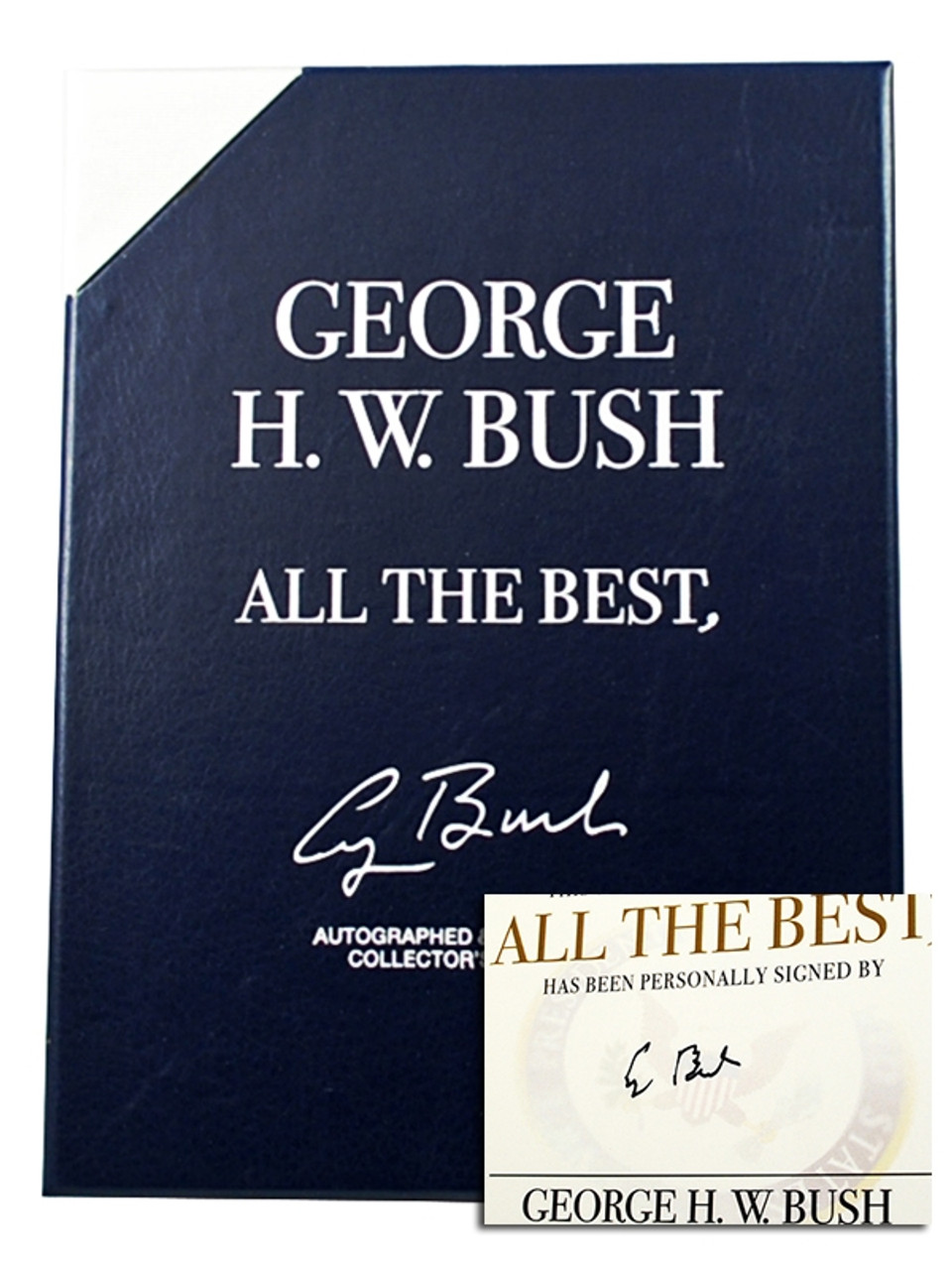 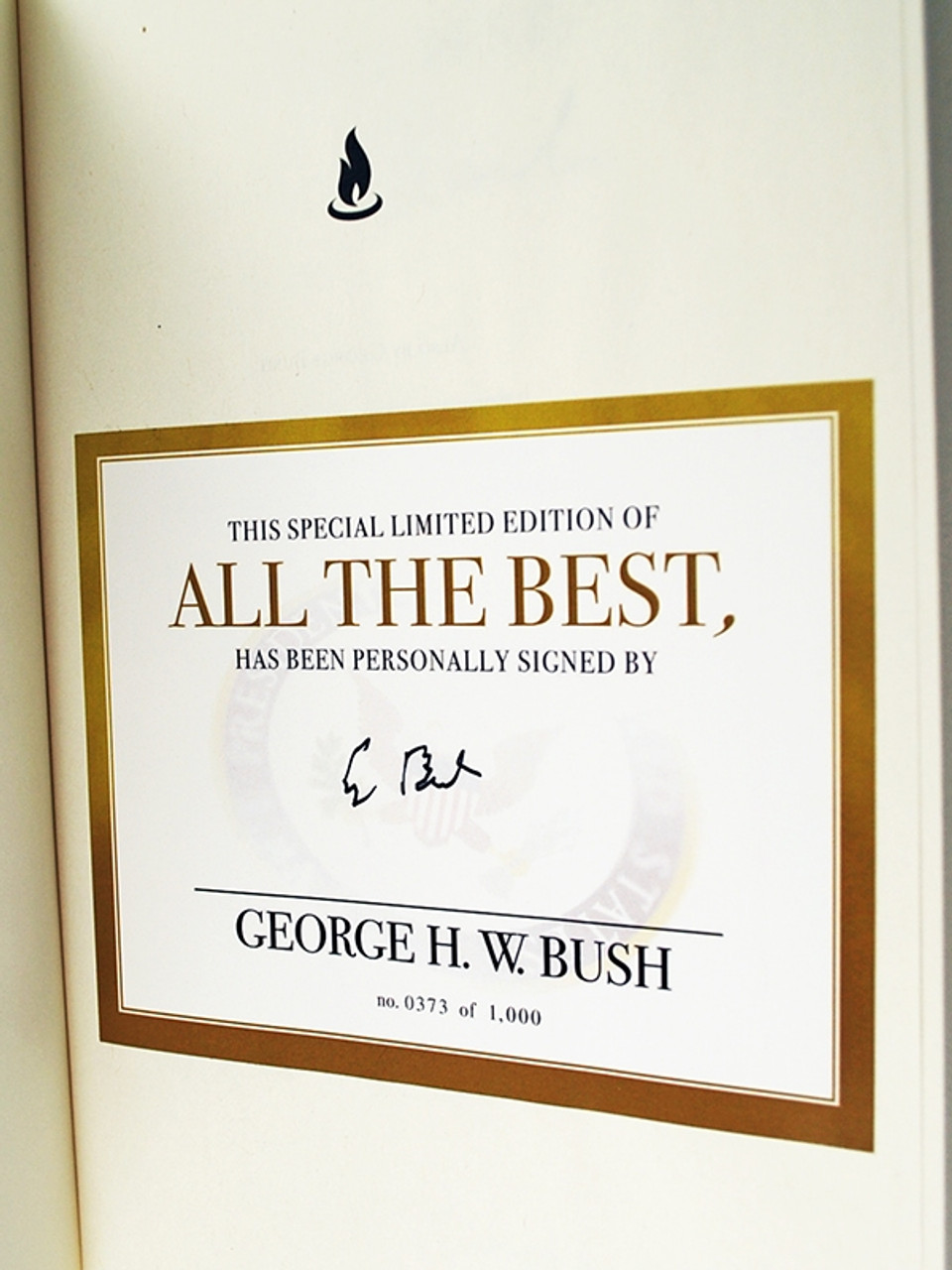 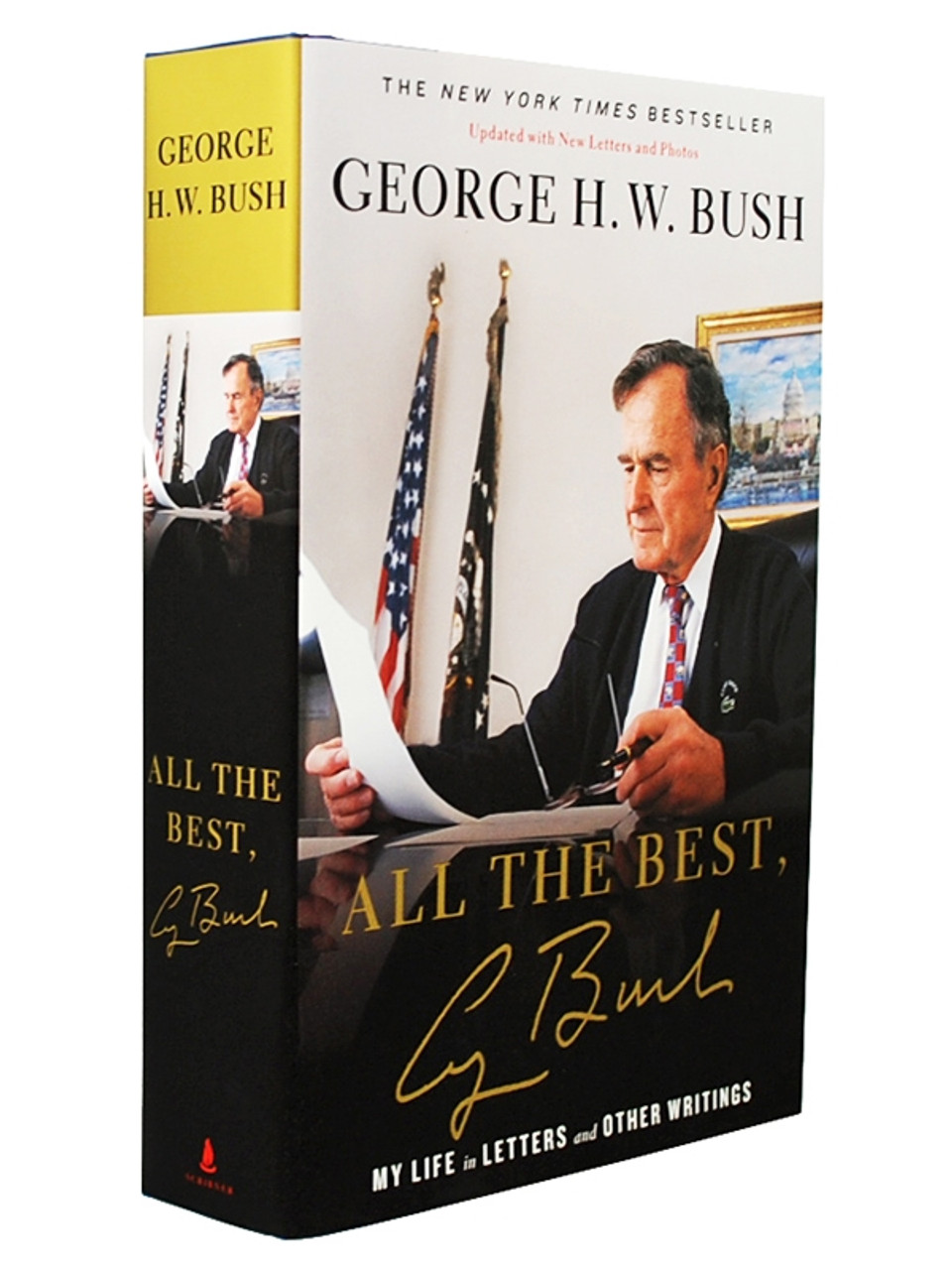 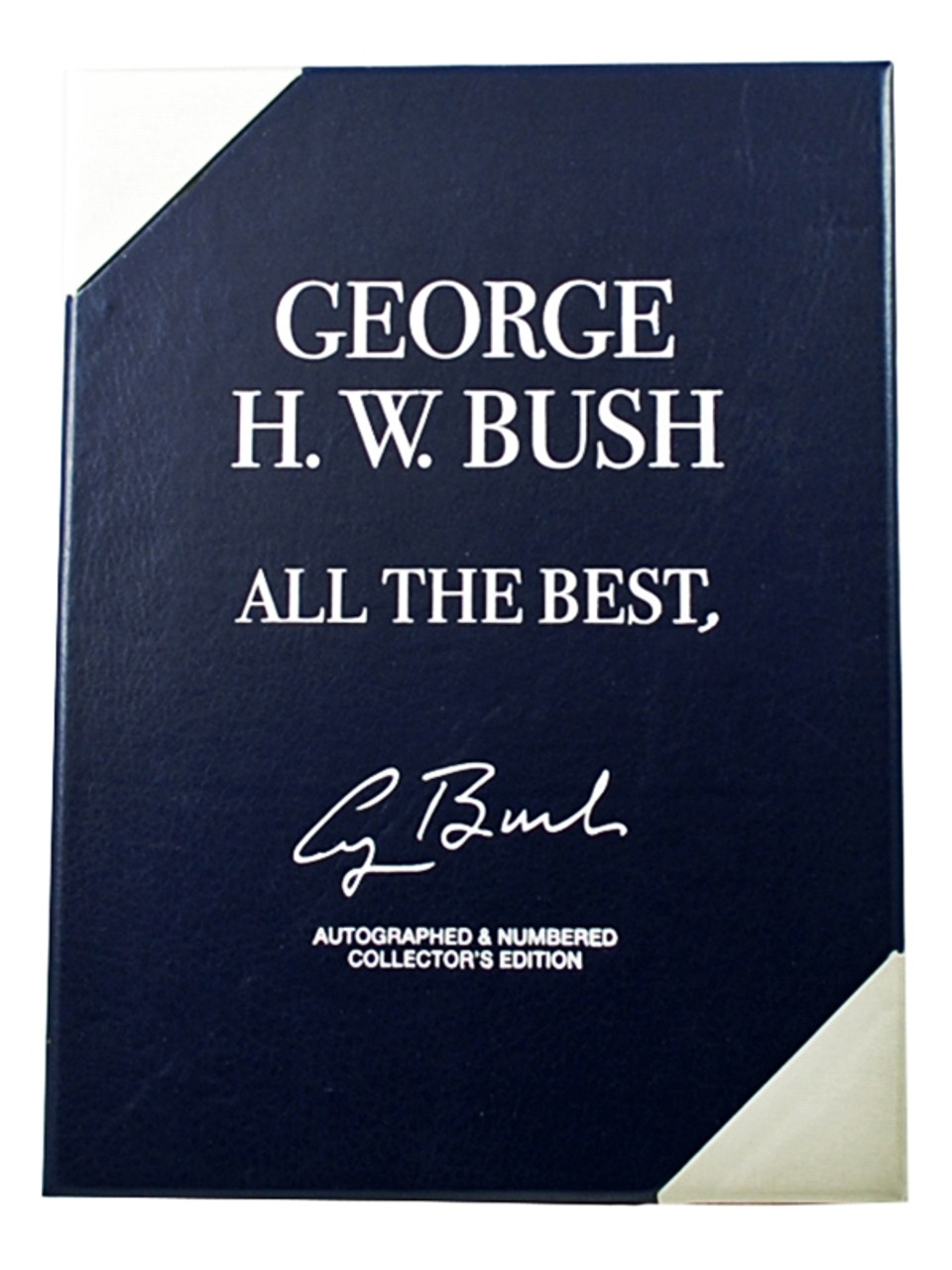 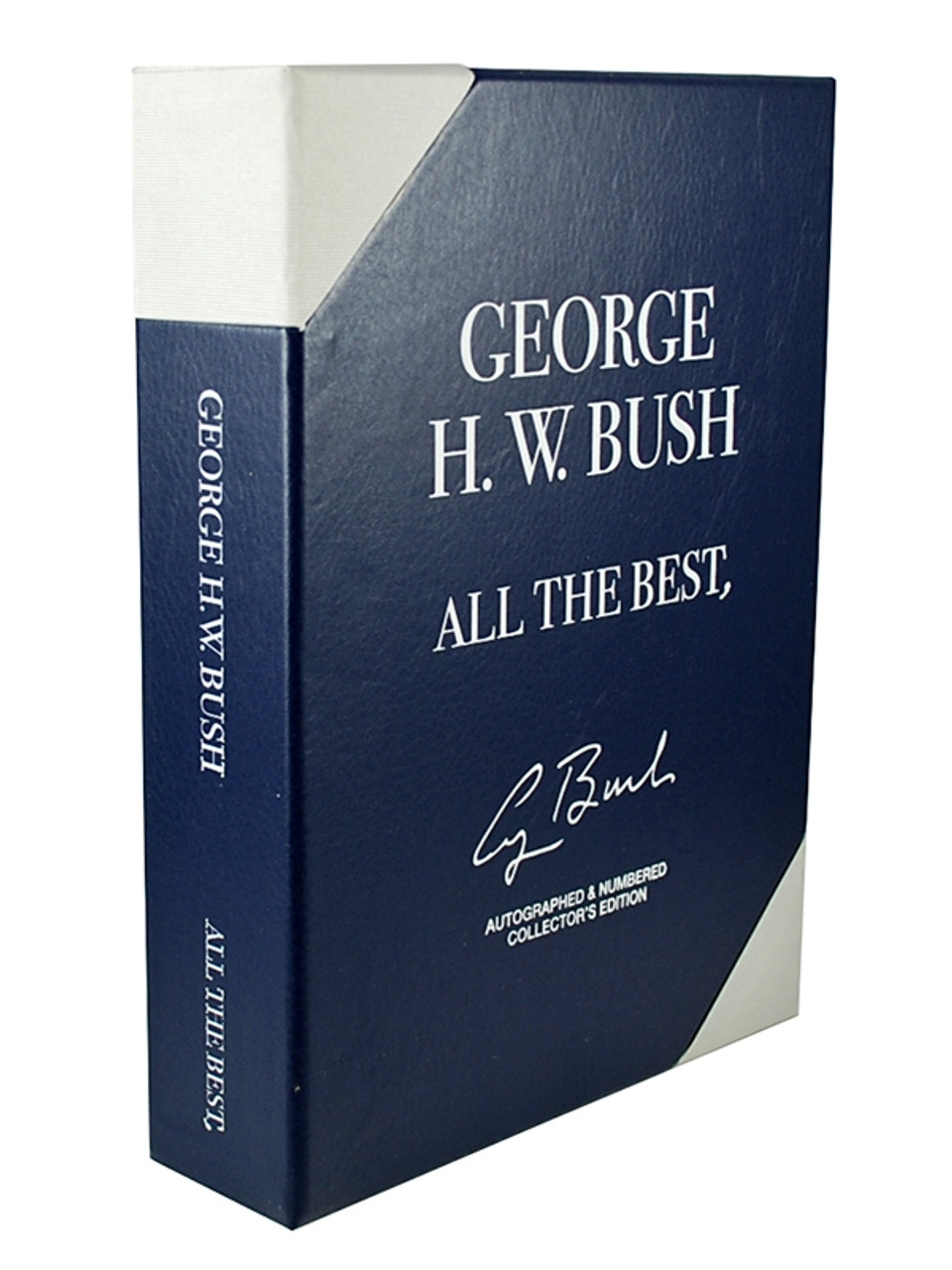 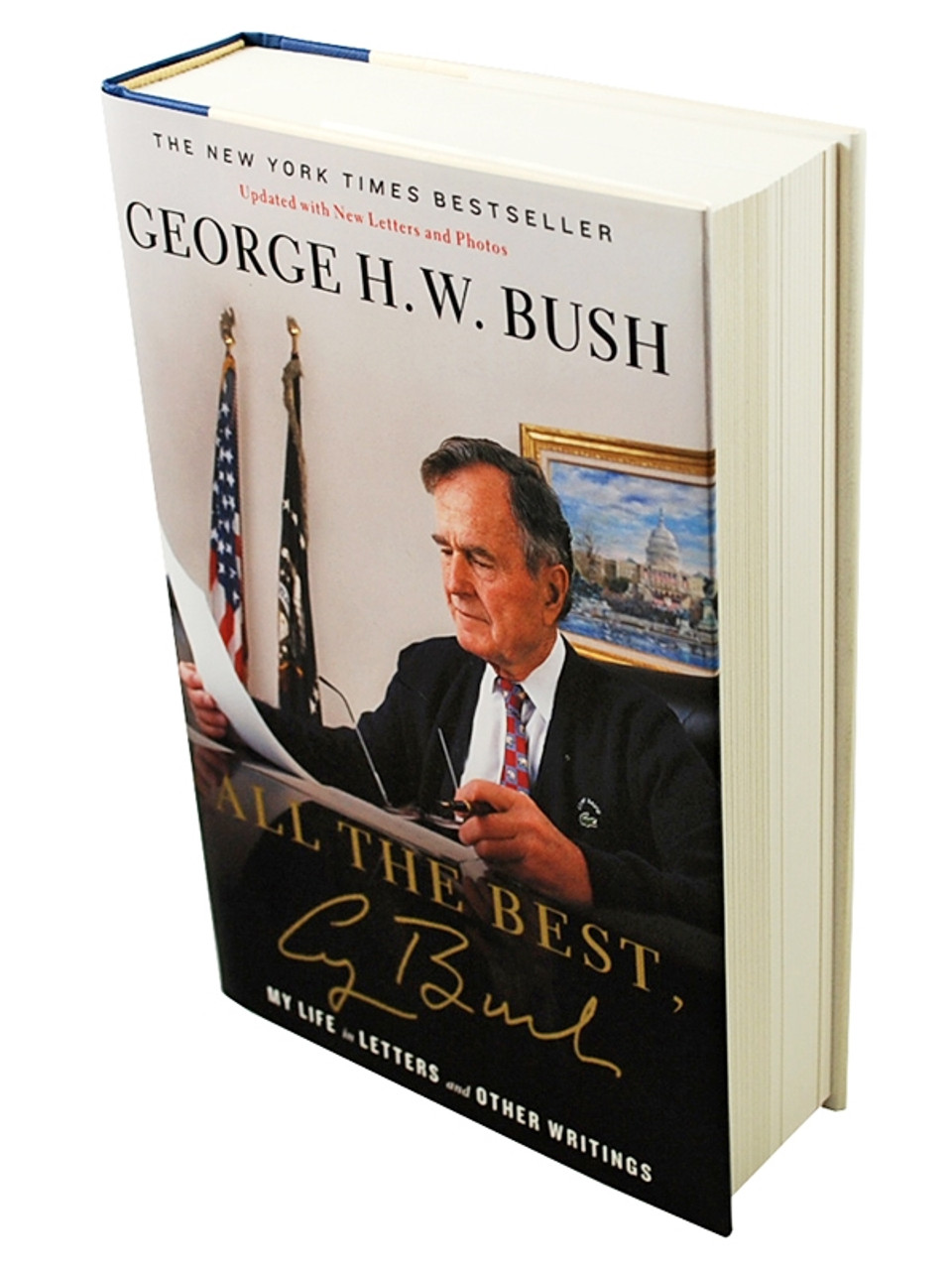 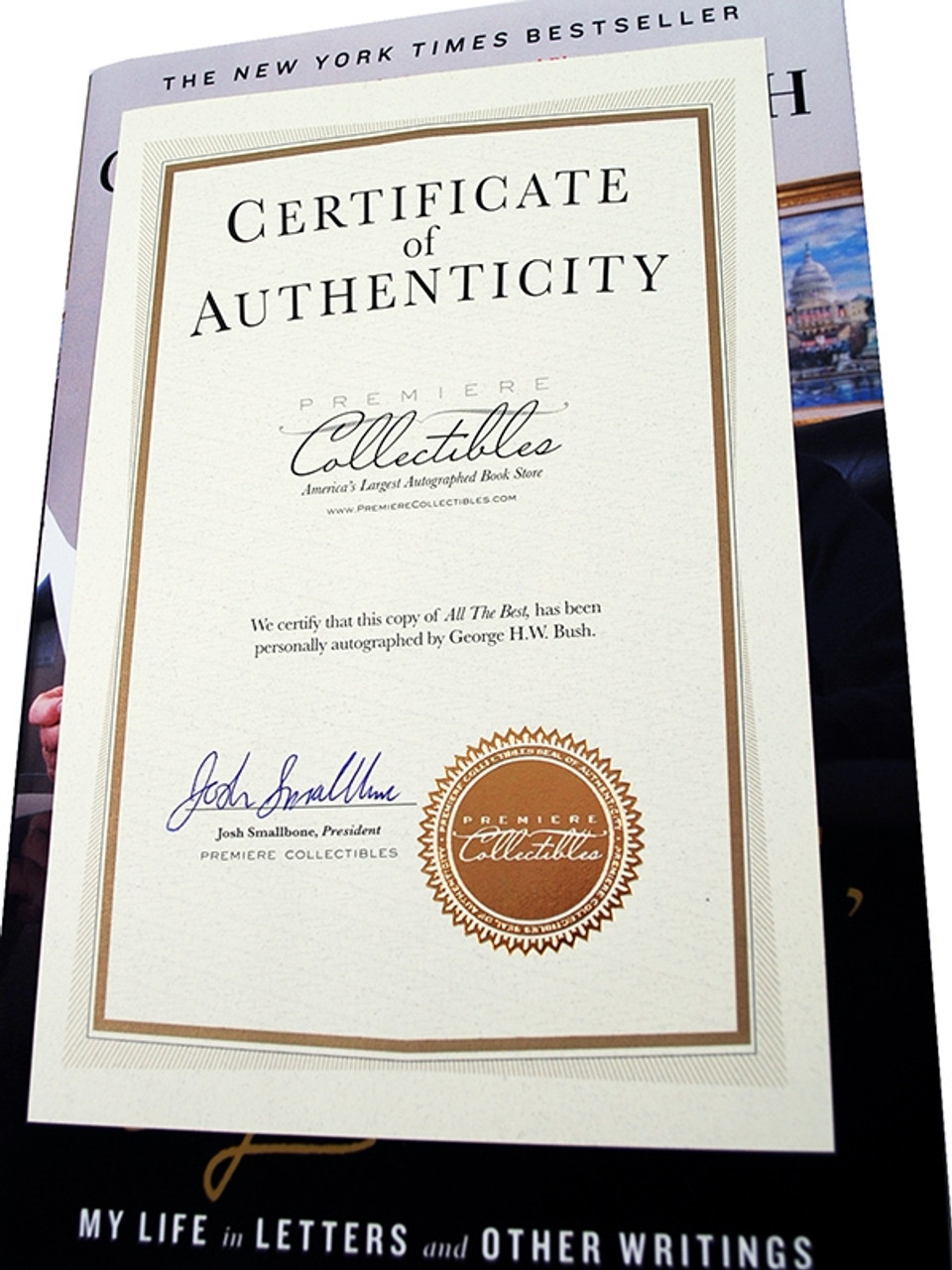 This hardcover & numbered edition of "All The Best: My Life in Letters and Other Writings" has been personally signed by George H.W. Bush directly onto a book-plate.

Though reticent in public, George Bush openly shared his private thoughts in correspondence throughout his life. This collection of letters, diary entries, and memos is the closest we’ll ever get to an autobiography. Organized chronologically, the volume begins with eighteen-year-old George’s letters to his parents during World War II, when, at the time he was commissioned, he was the youngest pilot in the Navy. Readers will gain insights into Bush’s career highlights—the oil business, his two terms in Congress, his ambassadorship to the U.N., his service as an envoy to China, his tenure with the Central Intelligence Agency, and of course, the vice presidency, the presidency, and the post-presidency.

They will also observe a devoted husband, father, and American. Ranging from a love letter to Barbara and a letter to his mother about missing his daughter, Robin, after her death from leukemia to a letter to his children two weeks before Nixon’s resignation to one written to them just before the beginning of Desert Storm, the writings are remarkable for their candor, humor, and poignancy. This new edition includes new letters and photographs that cover the last fifteen years, highlighting the Bush family’s enduring influence on history and including letters that cover topics such as George W. Bush’s presidency, 9/11, Bush senior’s work with President Clinton to help the victims of natural disasters, and the meaning of friendship and family. All the Best, George Bush provides a memorable, surprisingly intimate, and insightful portrayal of the forty-first president of the United States.

In lieu of a memoir, All the Best, George Bush collects correspondence and diary entries from the former U. S. President to show, as he says, "what my own heartbeat is, what my values are, what has motivated me in life. " The letters begin in 1942--when, fresh out of high school, Bush volunteered for U. S. Navy flight school--and continue to the brink of the 21st century, as the retired chief executive worries about the Melissa virus infecting his office's server and keeping his visiting grandchildren in line. ("I realize, " he muses, "Keep the freezer door closed from now on and I mean it lacks the rhetorical depth of This will not stand or Read my lips. ") All the Best hits all the highlights of Bush's career, from the Texas oil business to his role as ambassador to China, then CIA director, vice president under Ronald Reagan, and finally president himself. Along the way, he reveals a personality that is at turns compassionate, respectful, silly, doting, and resolute--a man for whom being a father and a grandfather matters as much as, and maybe even more than, being leader of the free ...

VERY FINE GUARANTEED. As New without any flaws. The condition is of the highest quality for the book, dust-jacket and collector's box. No markings, writings, or stamps.