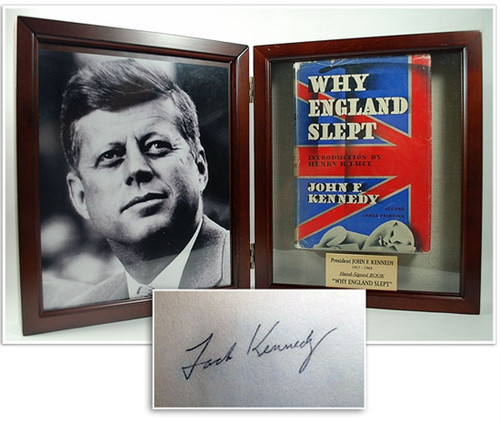 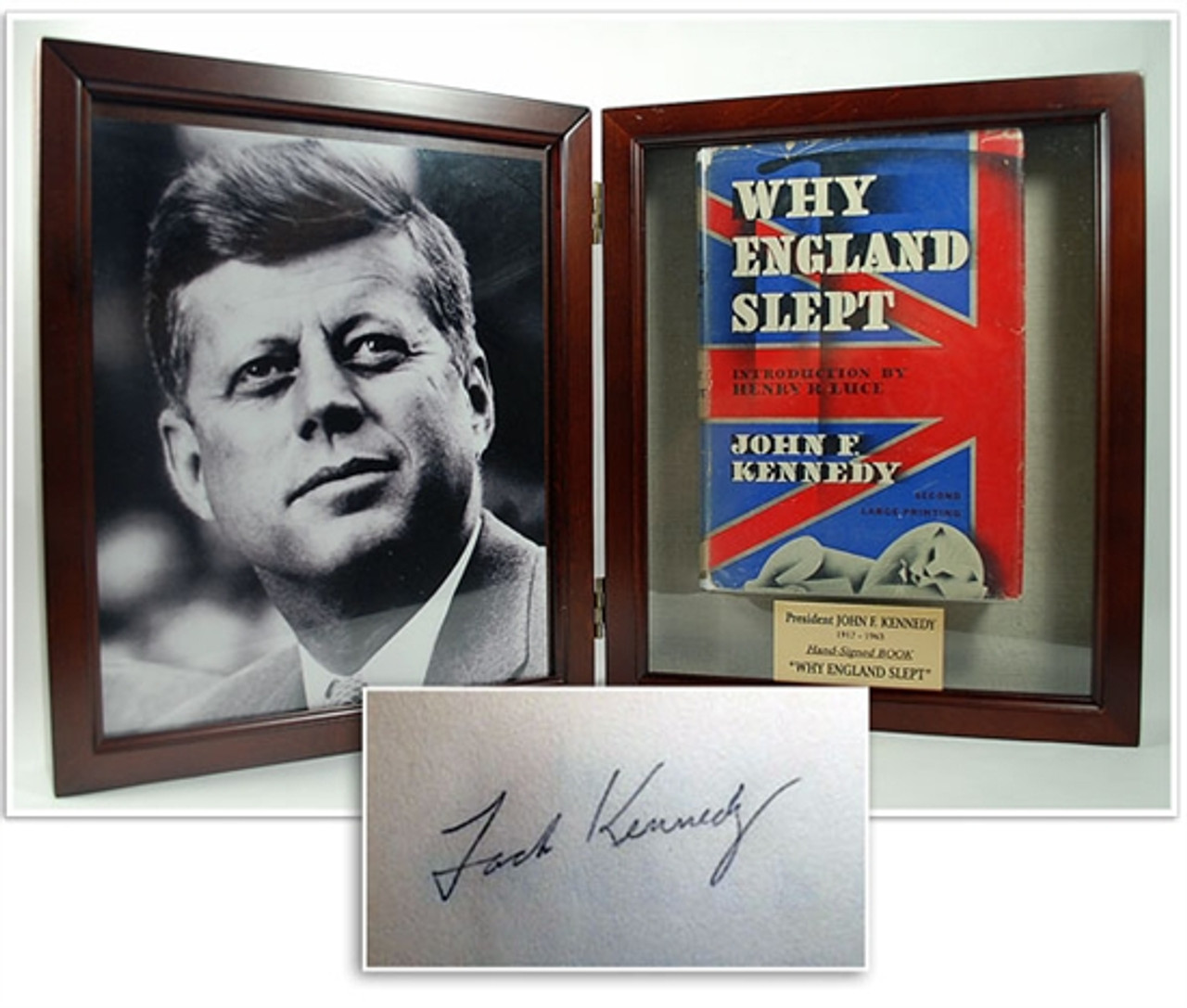 A rare early printing of John F. Kennedy's first book, "Why England Slept", flat-signed with a clear, early signature. A highly sought after presidential autograph. Personally hand signed directly into the book by John F. Kennedy. Includes letter of authenticity by the ASA (American Society of Appraisers). Serial no. AD46021. Signed on the title page.

A First edition, second printing hardcover with original second printing dust jacket, of "Why England Slept", an analysis of Britains lack of preparation for World War II, issued one month after the first printing.

John F. Kennedys signature is notorious among collectors for its variation over the years. This autograph is very clearly signed as Jack Kennedy, and is an excellent example of his early signature and likely dates close to the publication of the book.

Very Good+. Very good bright dust jacket with chipping to spine ends and other extremities. A very good copy with tight spine (square spine) and binding without any separation. No spine lean. Some staining to inside front and back covers only. Clean and straight boards with clear text lettering on spine. The previous owner has also inscribed this book on the FFEP (first free end paper) as shown. No other markings, writings, or stampings. No attached bookplates or indication of any removed. No torn or missing pages. An original hardcover book. Overall, this is a very good attractive signed first edition of an elusive Kennedy book.

About "Why England Slept"

Written by John F. Kennedy in 1940 when he was still in college and reprinted in 1961 when he was president, this book is an appraisal of the tragic events of the thirties that led to World War II. It is an account of England's unpreparedness for war and a study of the shortcomings of democracy when confronted by the menace of totalitarianism.

Published the year Kennedy graduated from Harvard, Why England Slept was an expansion of his senior thesis. The title is a variation on the title of Winston Churchills work, While England Slept, published about two years before Kennedys. Kennedys work attempts to explain why England was so poorly prepared for World War II and why Englands leaders settled upon the disastrous policies of appeasement. The book served as a warning to those in our country who felt that appeasing Hitler and staying out of the war was a viable option. It became a bestseller in the United States and went through several printings in its first year.

For all Americans who are wide awake enough to read this book is invaluable [It is] a remarkable book in many respects If John Kennedy is characteristic of the younger generationand I believe he ismany of us would be happy to have the destinies of this Republic handed over to his generation at once. This book has the rare and immensely appealing quality of combining factuality and breadth of understanding with the truest instincts of patriotism (Foreword, Henry Luce).

A magnificent leather bound heirloom set that would make a wonderful addition to your library.Easton Press, Norwalk, CT. 1992 "The Works of John F. Kennedy and Robert F. Kennedy". A rare collection...