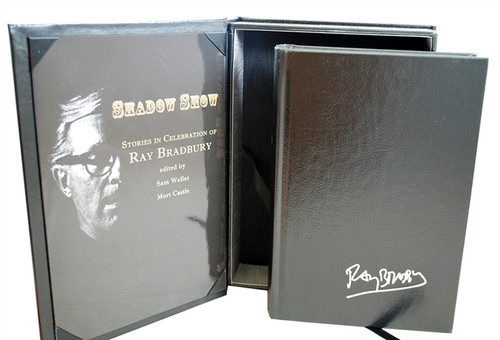 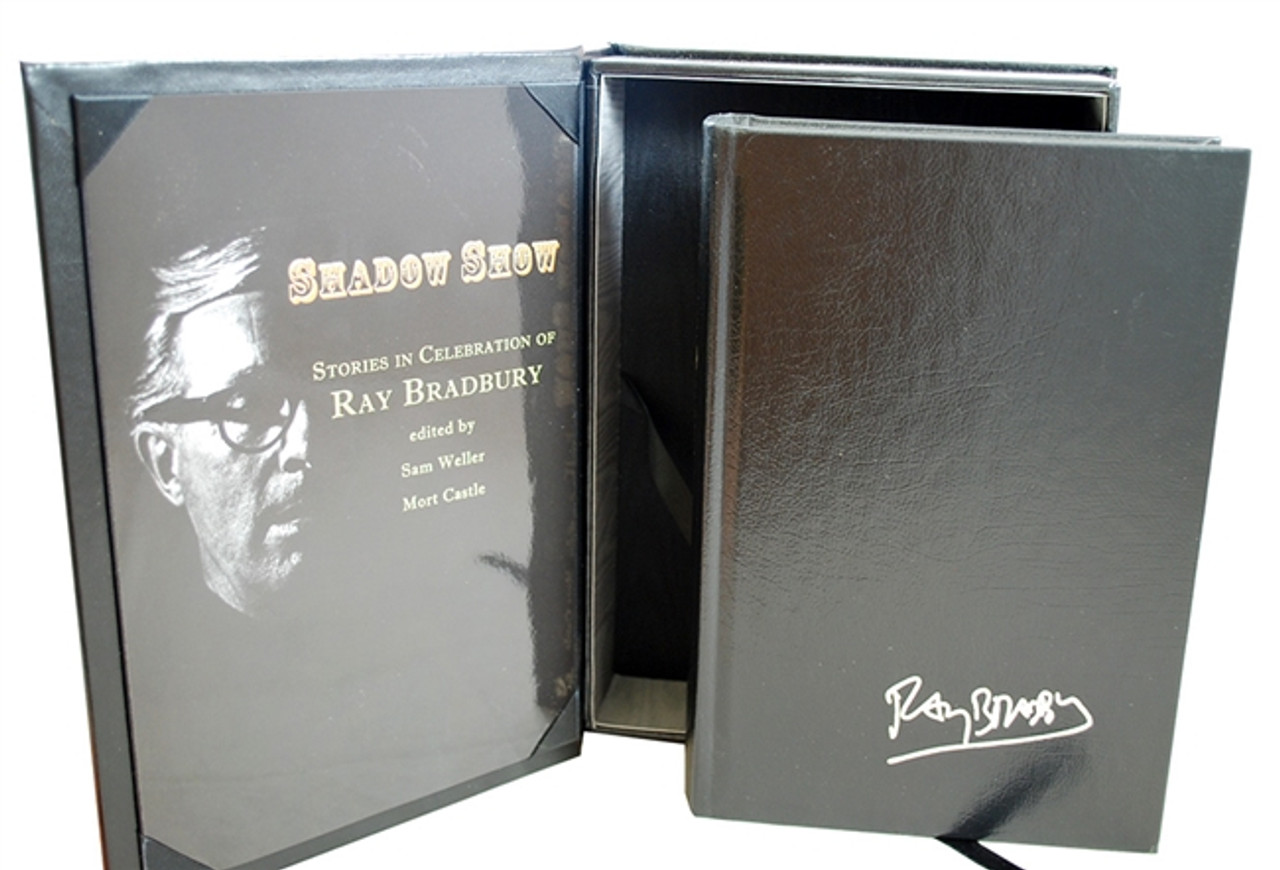 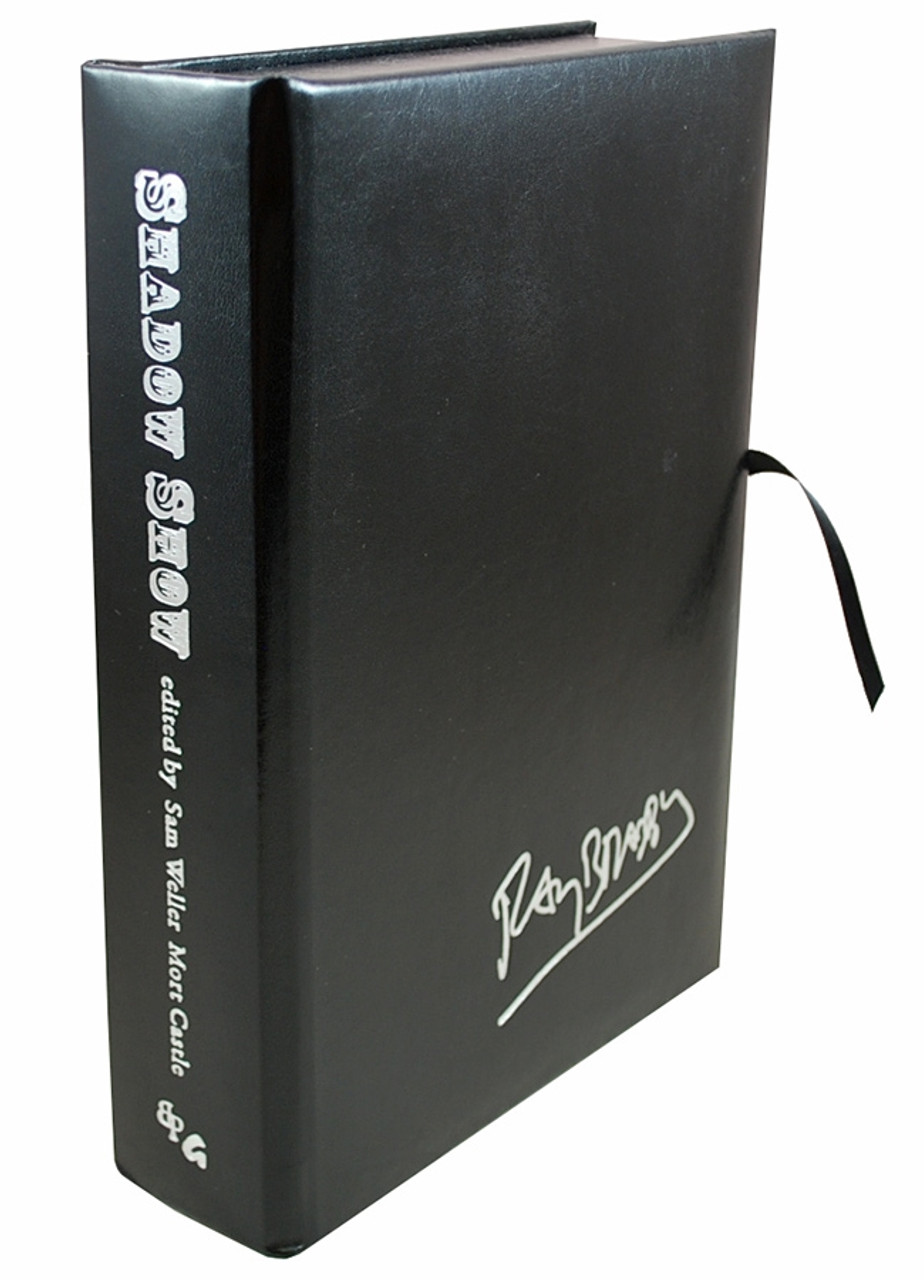 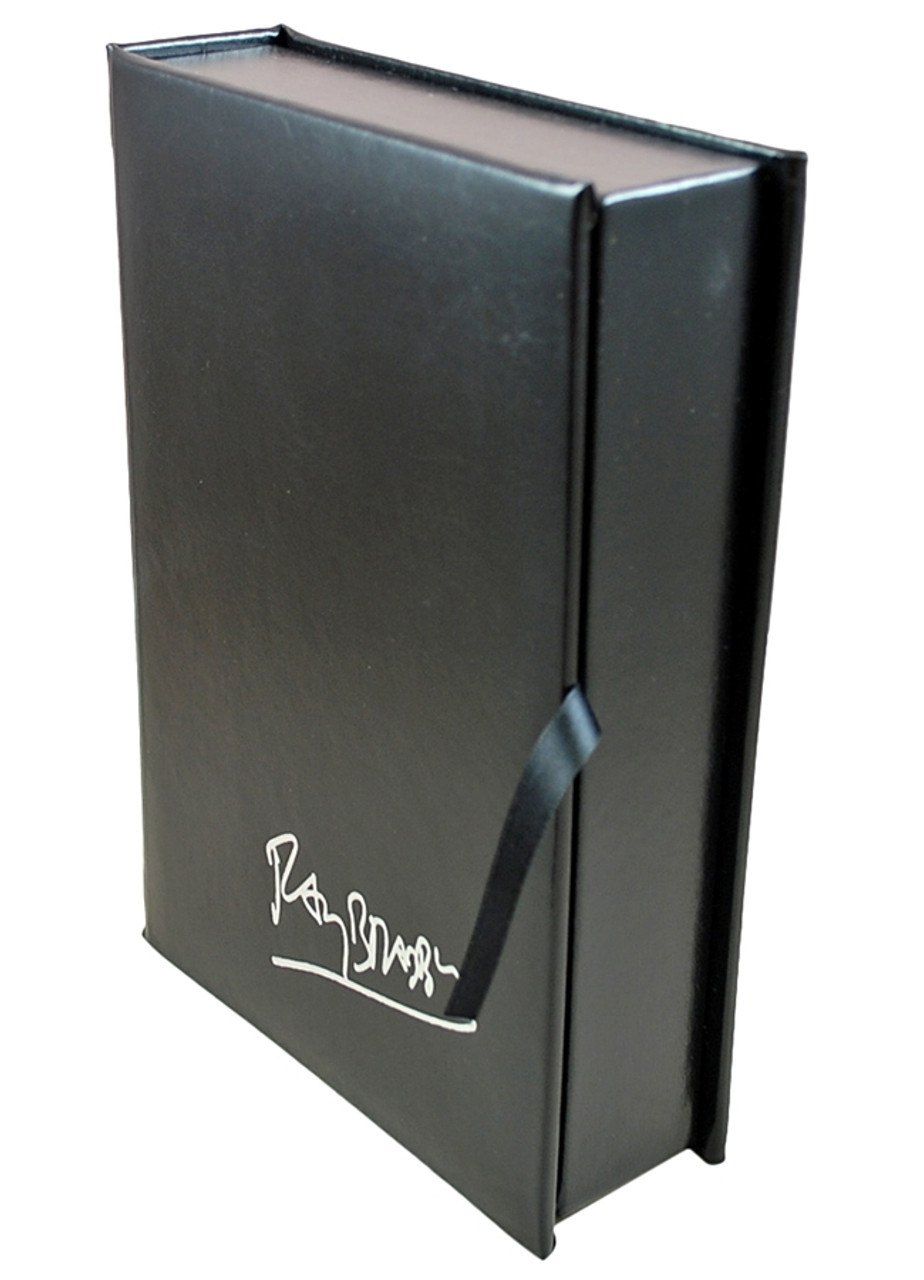 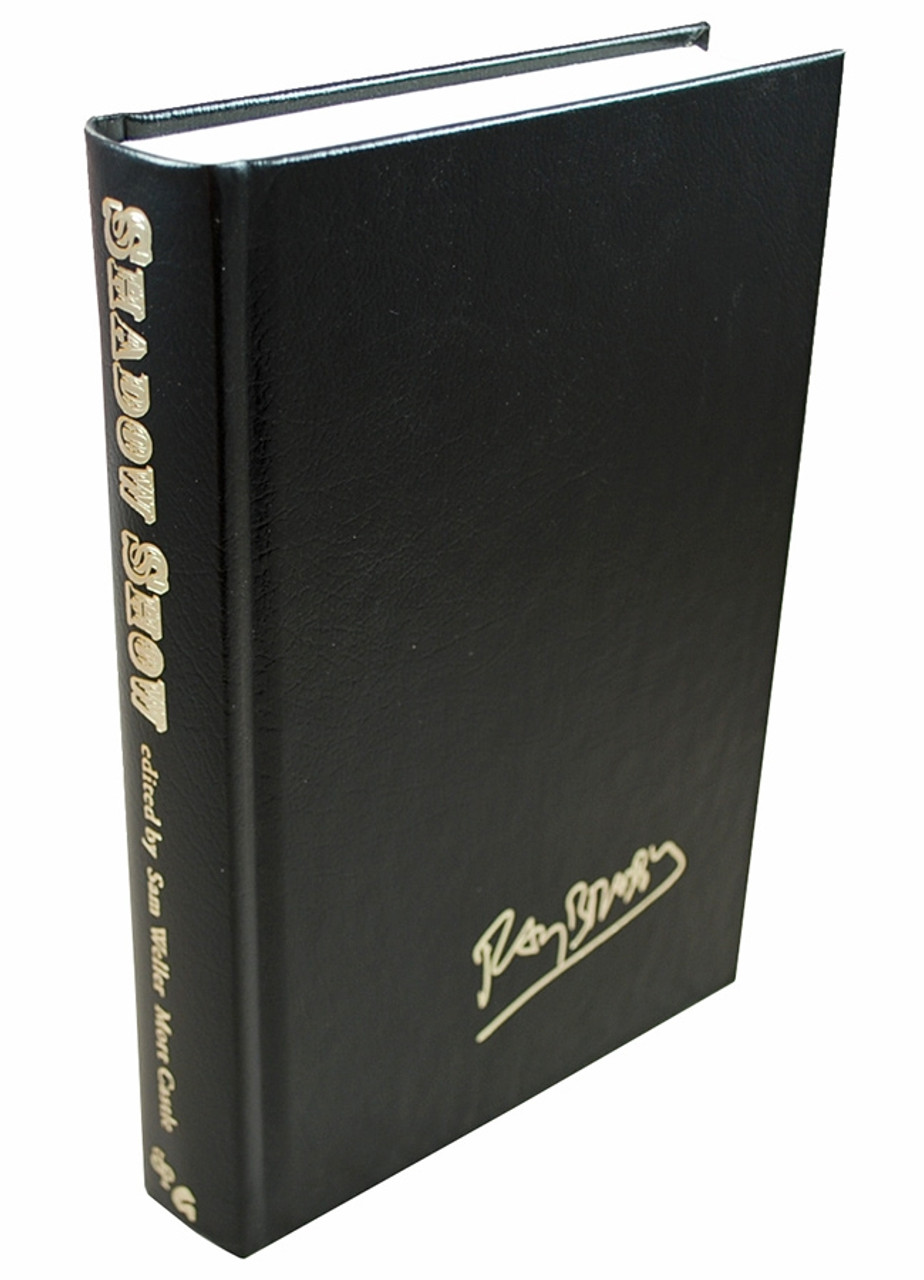 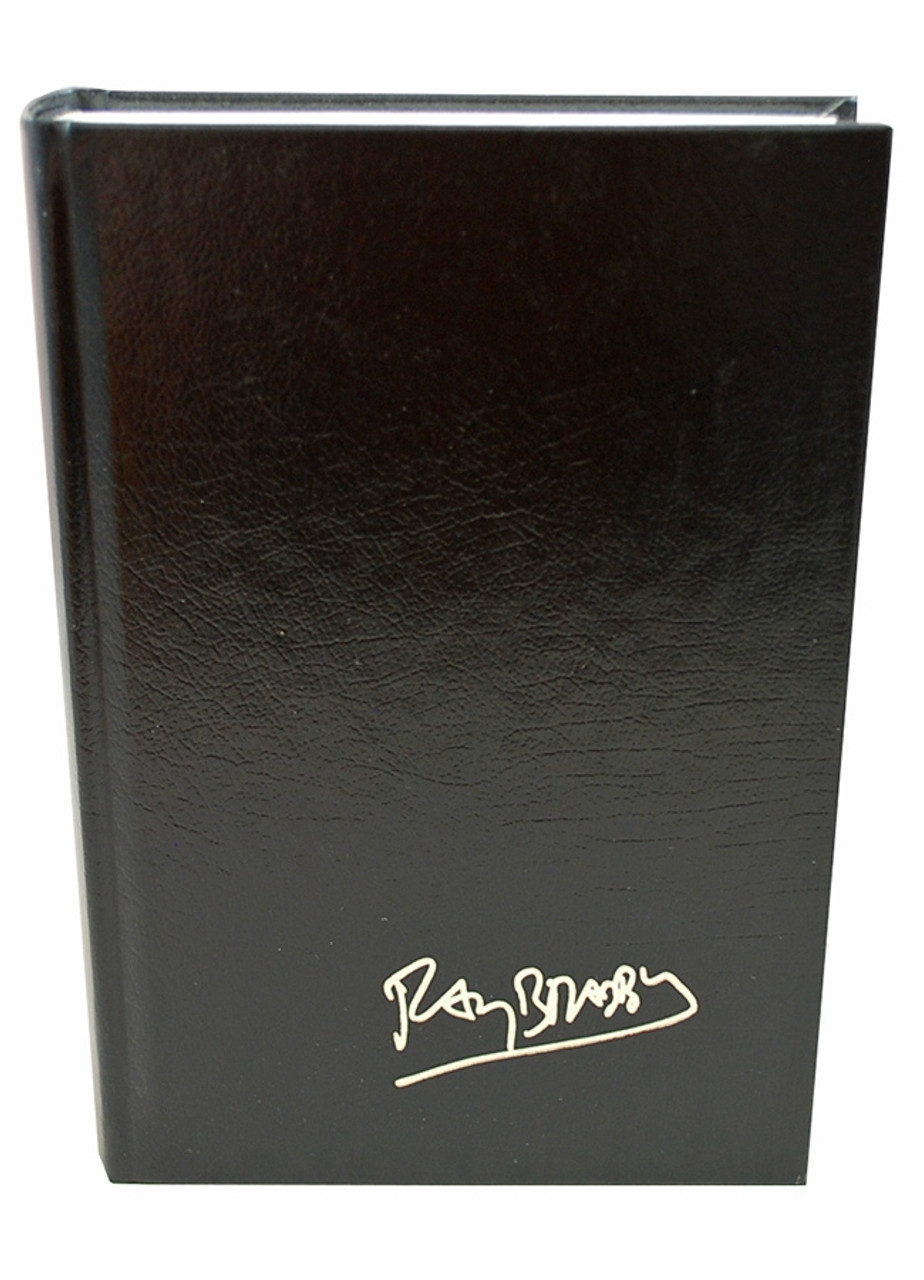 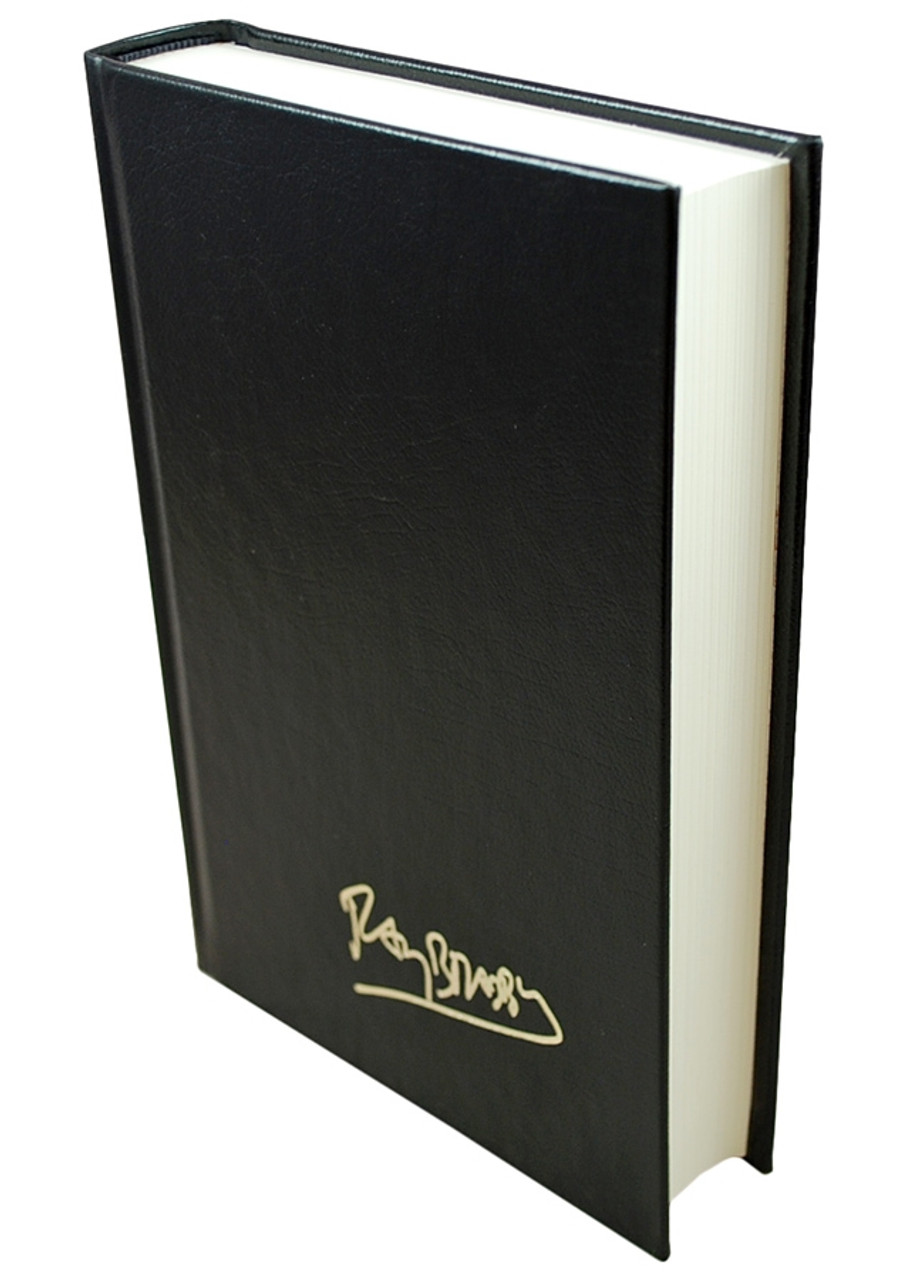 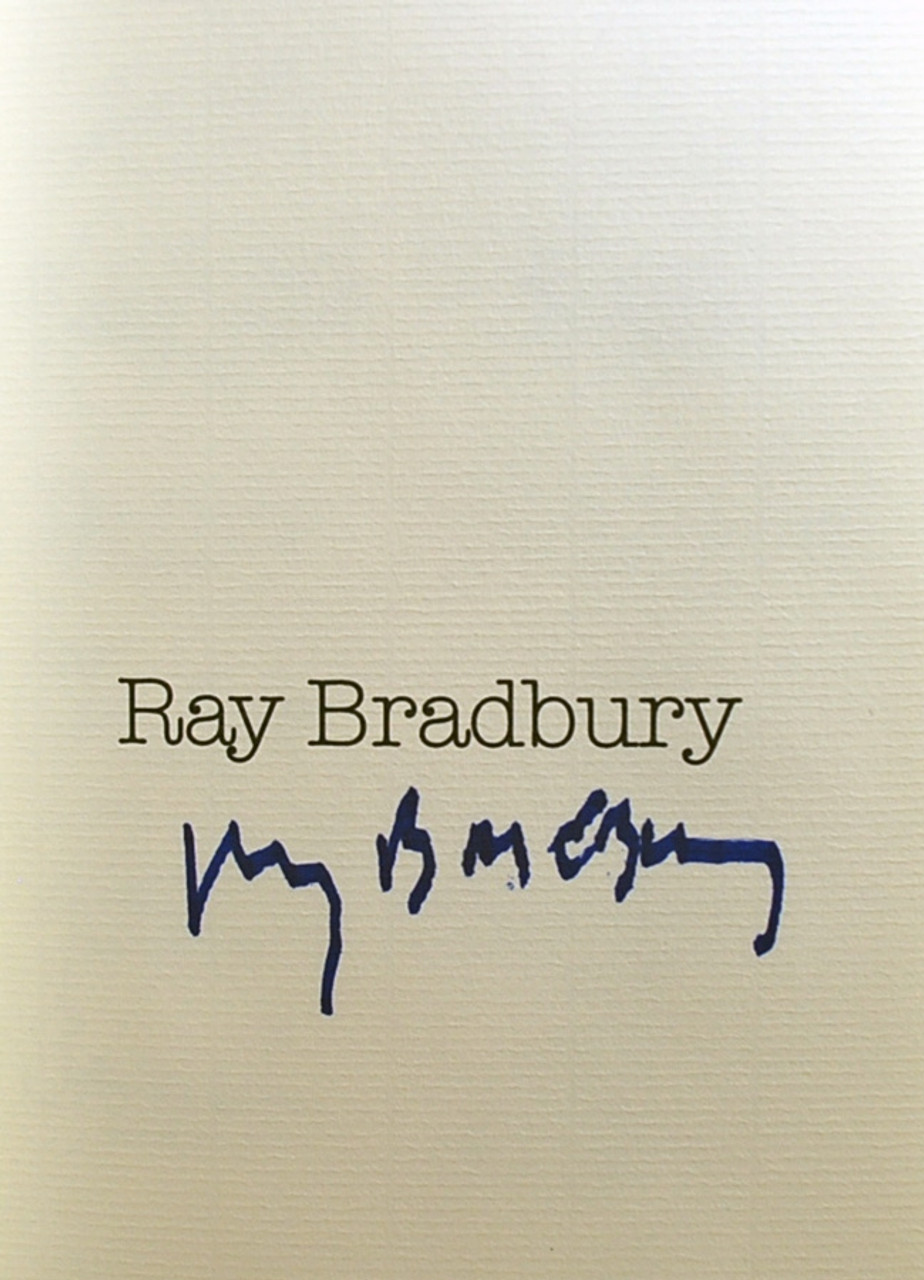 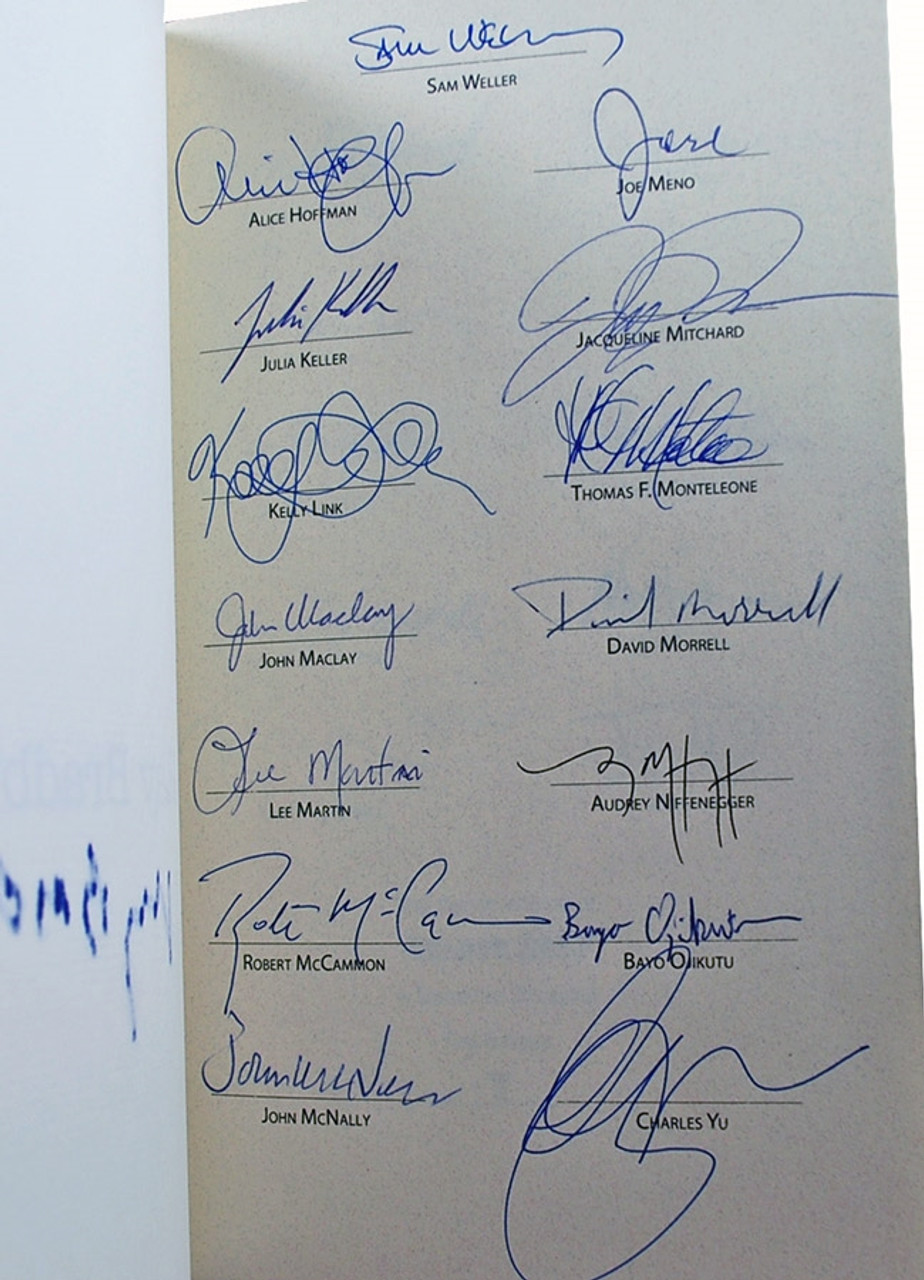 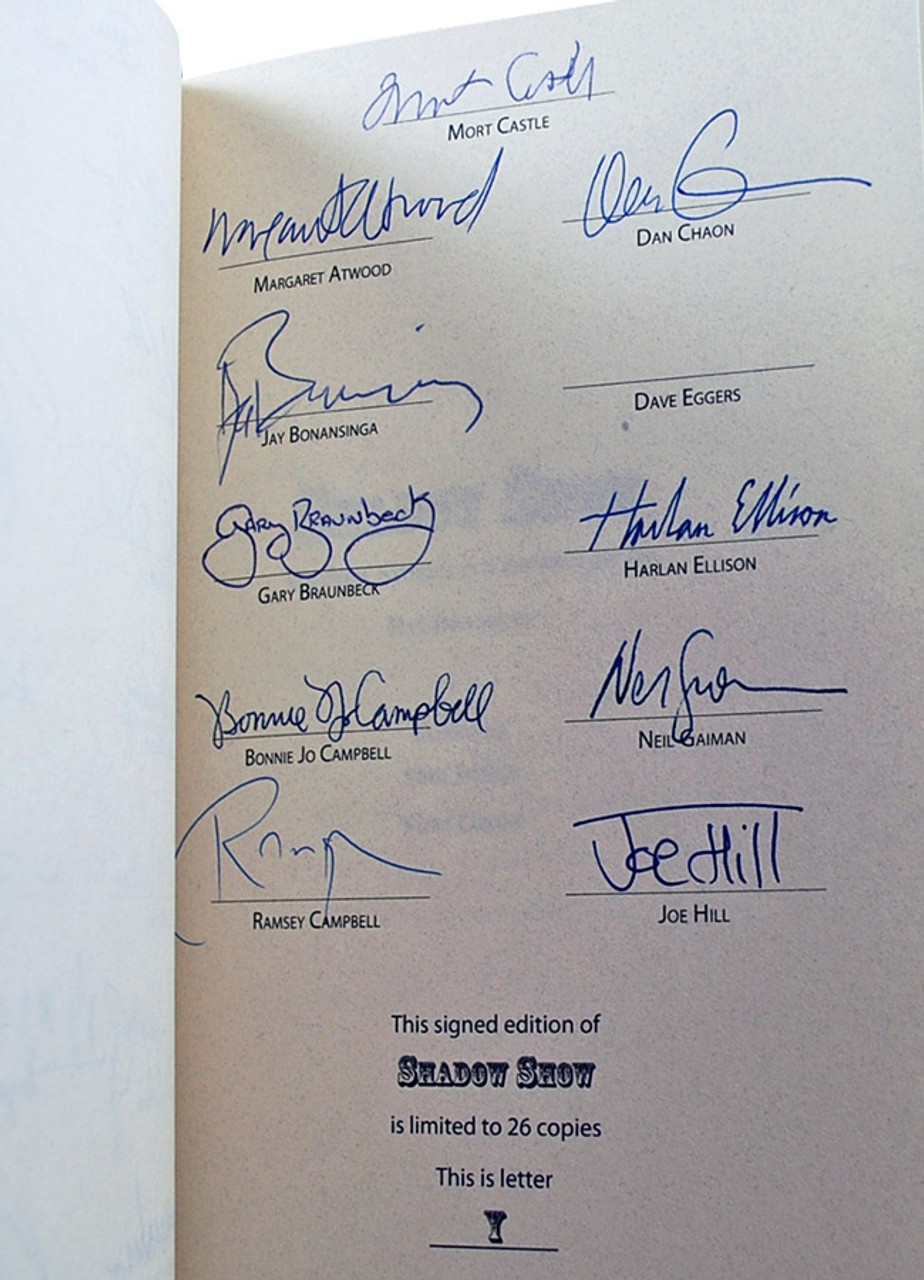 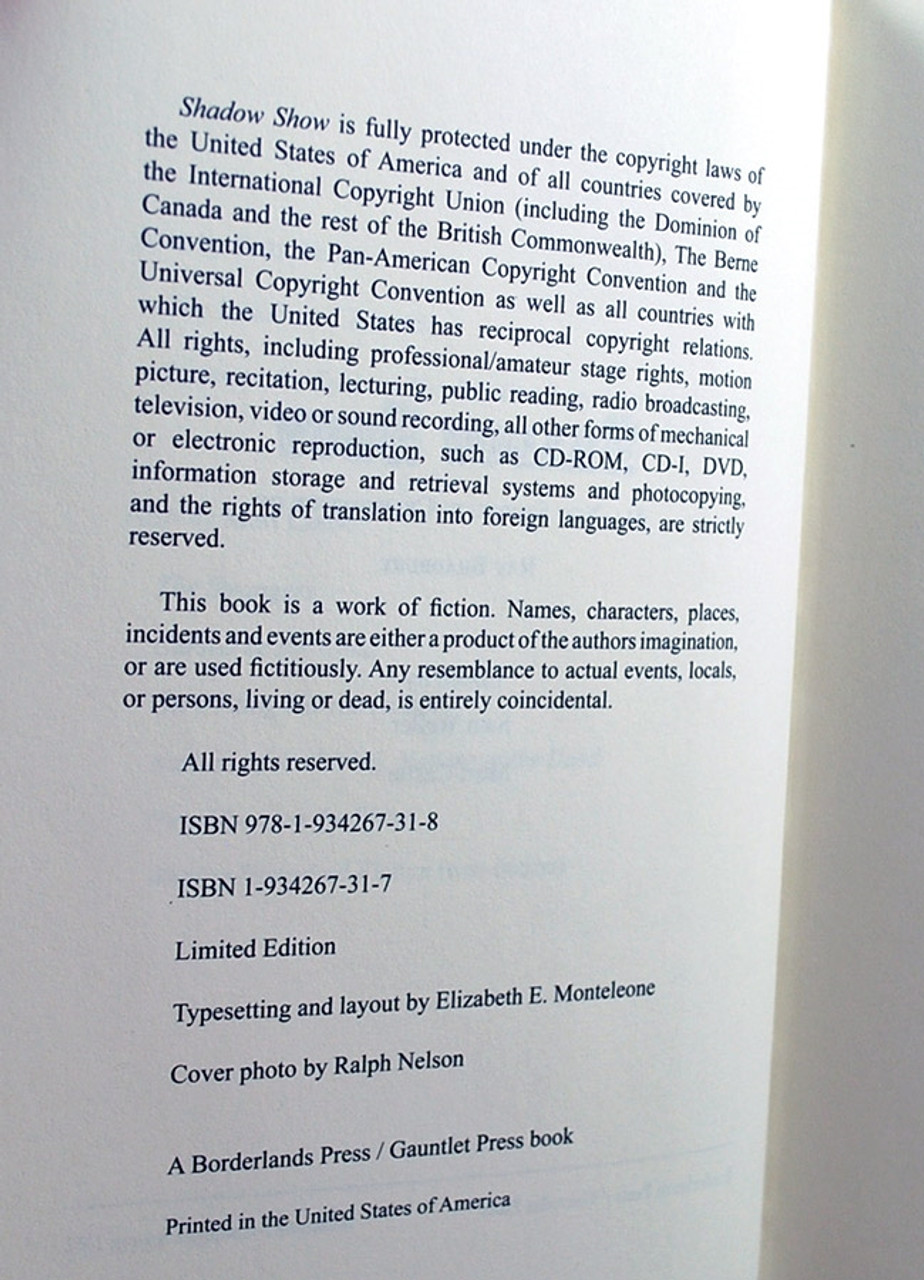 Personally signed by Ray Bradbury and many contributors.

Additionally signed by all contributors other than Dave Eggers.

"Shadow Show: Stories in Celebration of Ray Bradbury". Edited by Sam Weller and Mort Castle. Signed Lettered Edition "Y" of only 26 produced. Bound in a premium cloth and housed in a matching tray-case. 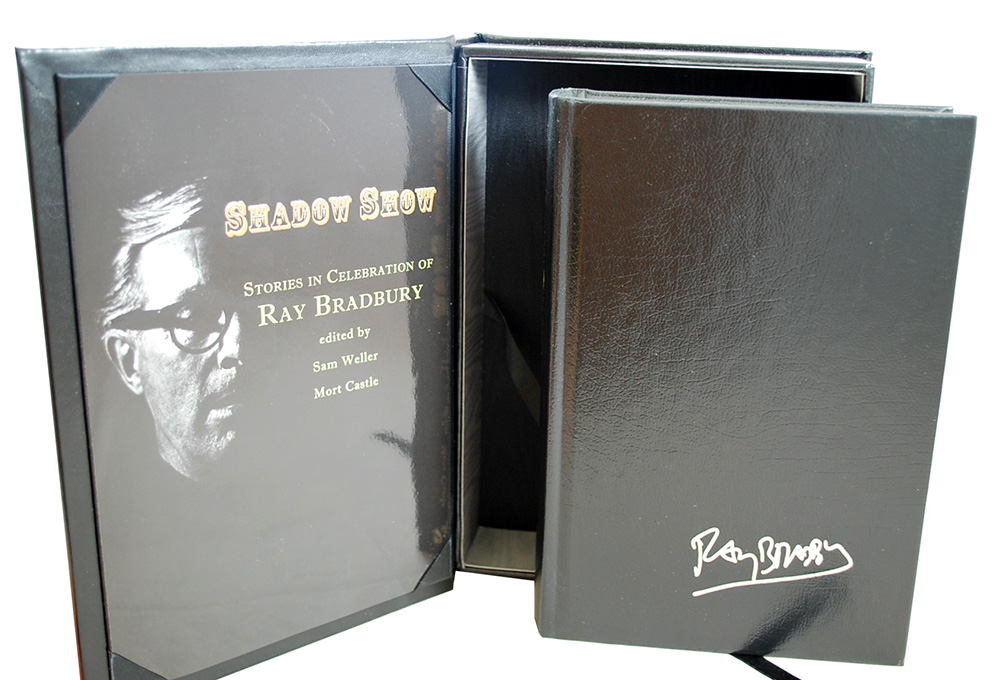 What do you imagine when you hear the name...Bradbury?

You might see rockets to Mars. Or bizarre circuses where otherworldly acts whirl in the center ring. Perhaps you travel to a dystopian future, where books are set ablaze...or to an out-of-the-way sideshow, where animated illustrations crawl across human skin. Or maybe, suddenly, you're returned to a simpler time in small-town America, where summer perfumes the air and life is almost perfect...almost.

Ray Bradbury - peerless storyteller, poet of the impossible, and one of America's most beloved author - is a literary giant whose remarkable career has spanned seven decades. Now twenty-six of today's most diverse and celebrated authors offer new short works in honor of the master; stories of heart, intelligence, and dark wonder from a remarkable range of creative artists.

Shadow Show is a very fitting tribute to this man who never quit writing. Neil Gaiman's opening piece "The Man Who Forgot Ray Bradbury" is a wonderfully meta sort of piece about memory and writing, made all the more poignant by Bradbury's passing. Along with a foreword by Bradbury himself, it's like the narthex into a grand cathedral of words built in honor of this master storyteller.

"Ray Bradbury is without a doubt, one of this, or any century's greatest and most imaginative writers. SHADOW SHOW, a book of truly great stories, is the perfect tribute to America's master storyteller." -- Stan Lee

"SHADOW SHOW is a treasure-trove for Ray Bradbury enthusiasts as for all readers who are drawn to richly imaginative, deftly plotted, startlingly original and unsettling short fiction. No one who knows their darkly fantastic fiction would be surprised to see such renowned names here as Ramsey Campbell, Harlan Ellison, Margaret Atwood, Neil Gaiman, Audrey Niffenegger, and Kelly Link; but it is something of a surprise to see Dave Eggers, Jacquelyn Mitchard, Dan Chaon, and Bonnie Jo Campell in this gathering, all of them Ray Bradbury admirers, and all so gifted. The tributes to Ray Bradbury that follow each of the stories are particularly interesting, often heartwarming and inspiring." -- Joyce Carol Oates

"What is amazing is the range of authors. The roster includes a list of distinguished writers both expected and not. What is also amazing is the potential audience for this treasury, which includes lovers of fiction regardless of any previous attraction to SF or Fantasy...an exciting book." - Brad Hooper, Booklist

"This is a dazzling and brilliant homage to an author whose eternal and forward-thinking fiction raced ahead of history, often predicting the future with uncanny accuracy." - The Tomb of Dark Delights

"It really is a Who's Who of the absolutely best in modern literature. The result may be the greatest collection of short stories ever compiled." - Houston Press

"Nearly all of the tales in here capture the magic of Bradbury, whether in the story itself or in the anecdotes which follow. No matter how odd or dark the story, the contributors remember that part of the master's allure was to keep the story grounded in "reality," even if reached to the further corner of outer space. We've been to these places, with these characters." - Dave Simms, HorrorWorld

Lettered signed limited edition, lettered "Y". Bound in a premium cloth and housed in a matching traycase.
VERY FINE GUARANTEED. A wonderful bright clean copy free of any markings, writings, or stamps. Sharp corners that have not been bumped. Unread book with square and tight binding. No bookplates attached or indication of any removed. Edges are free of any marks, spots, scratches, or blemishes.