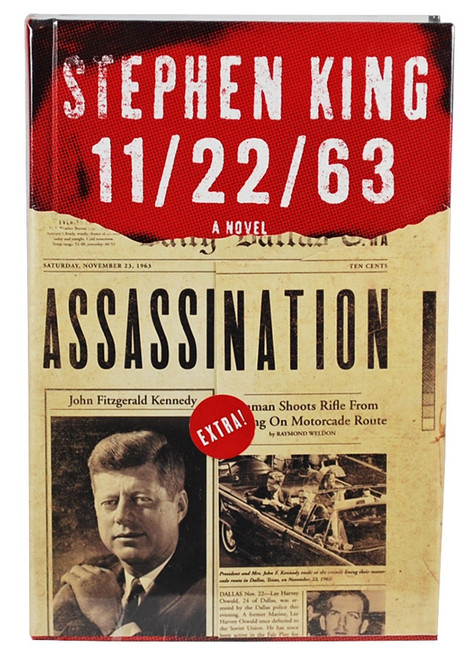 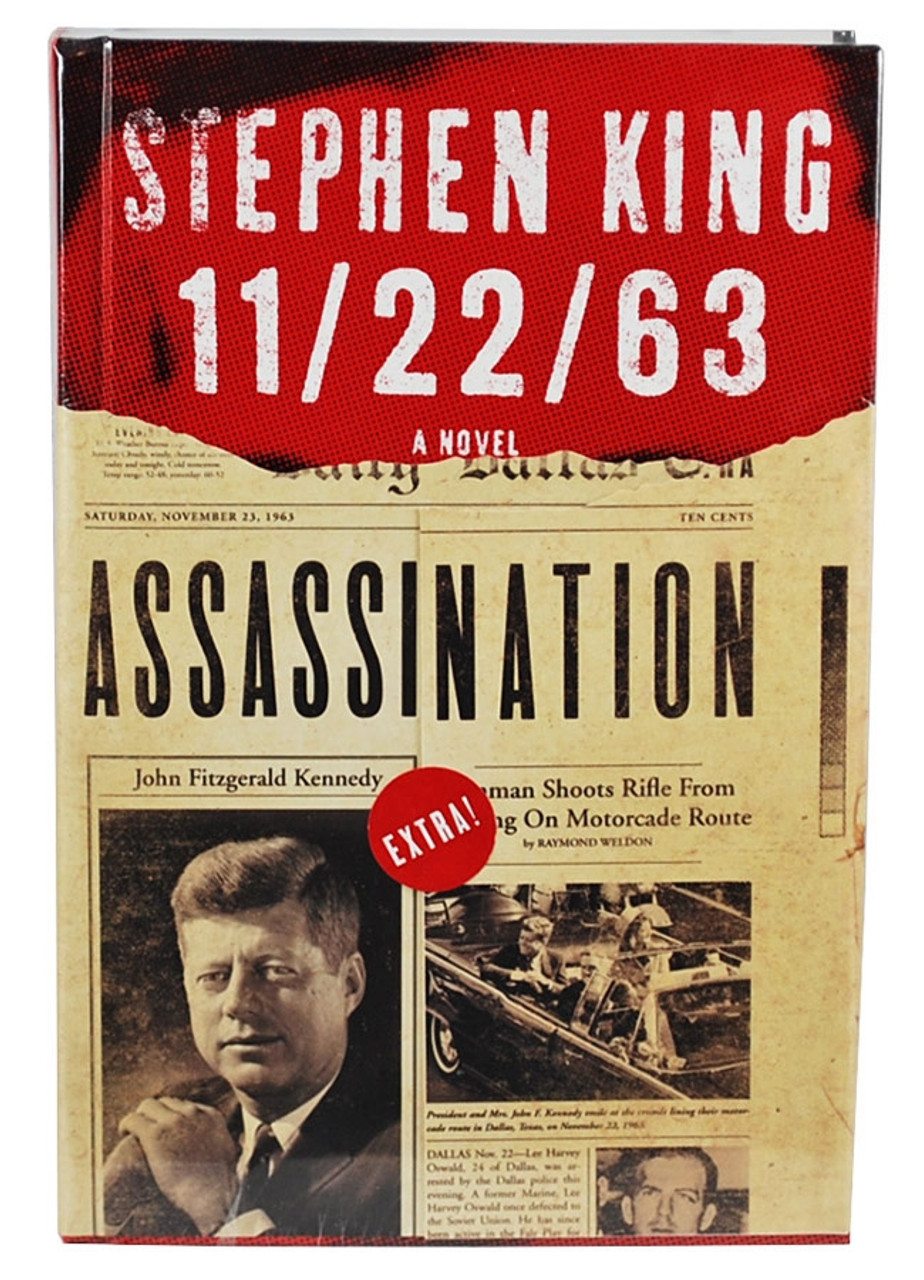 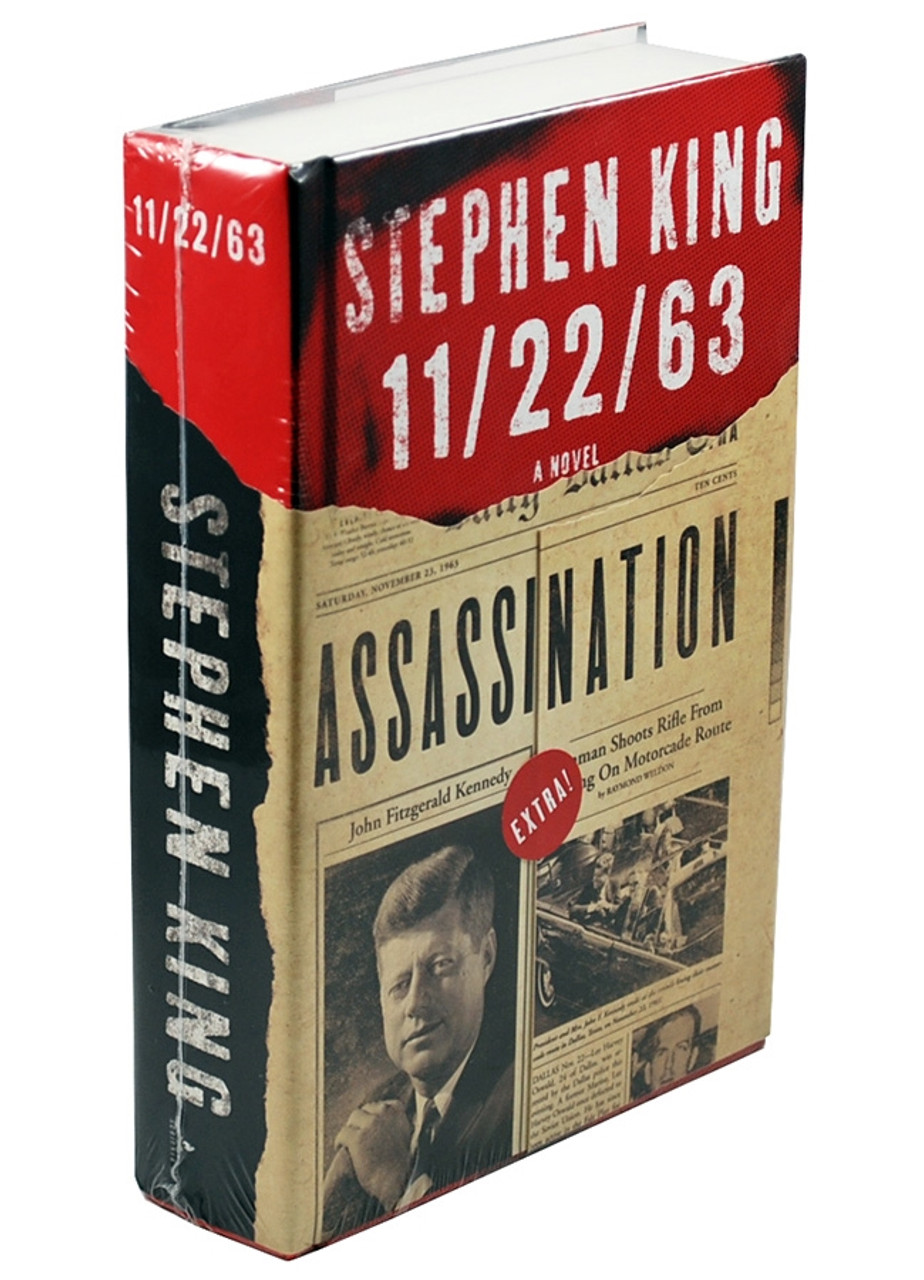 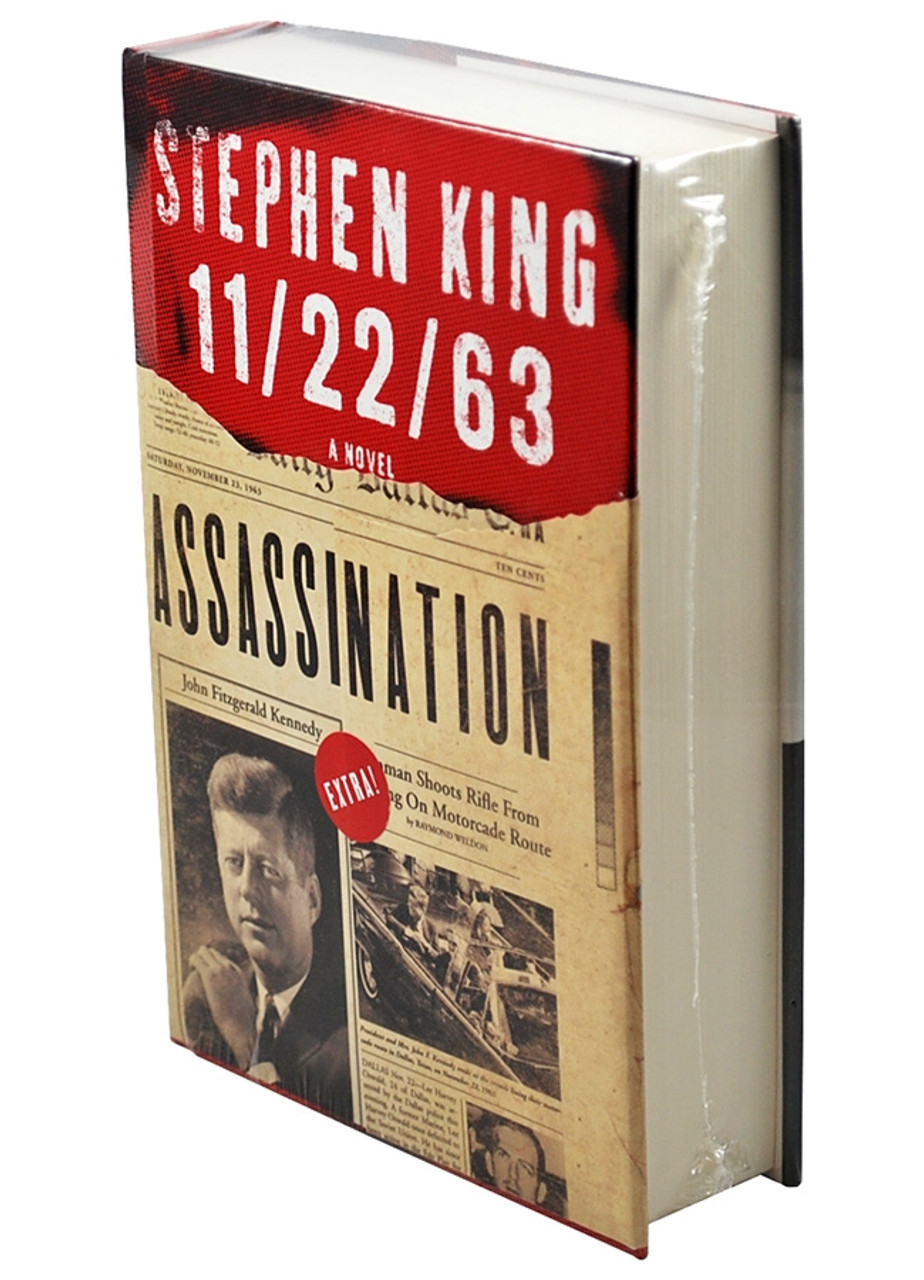 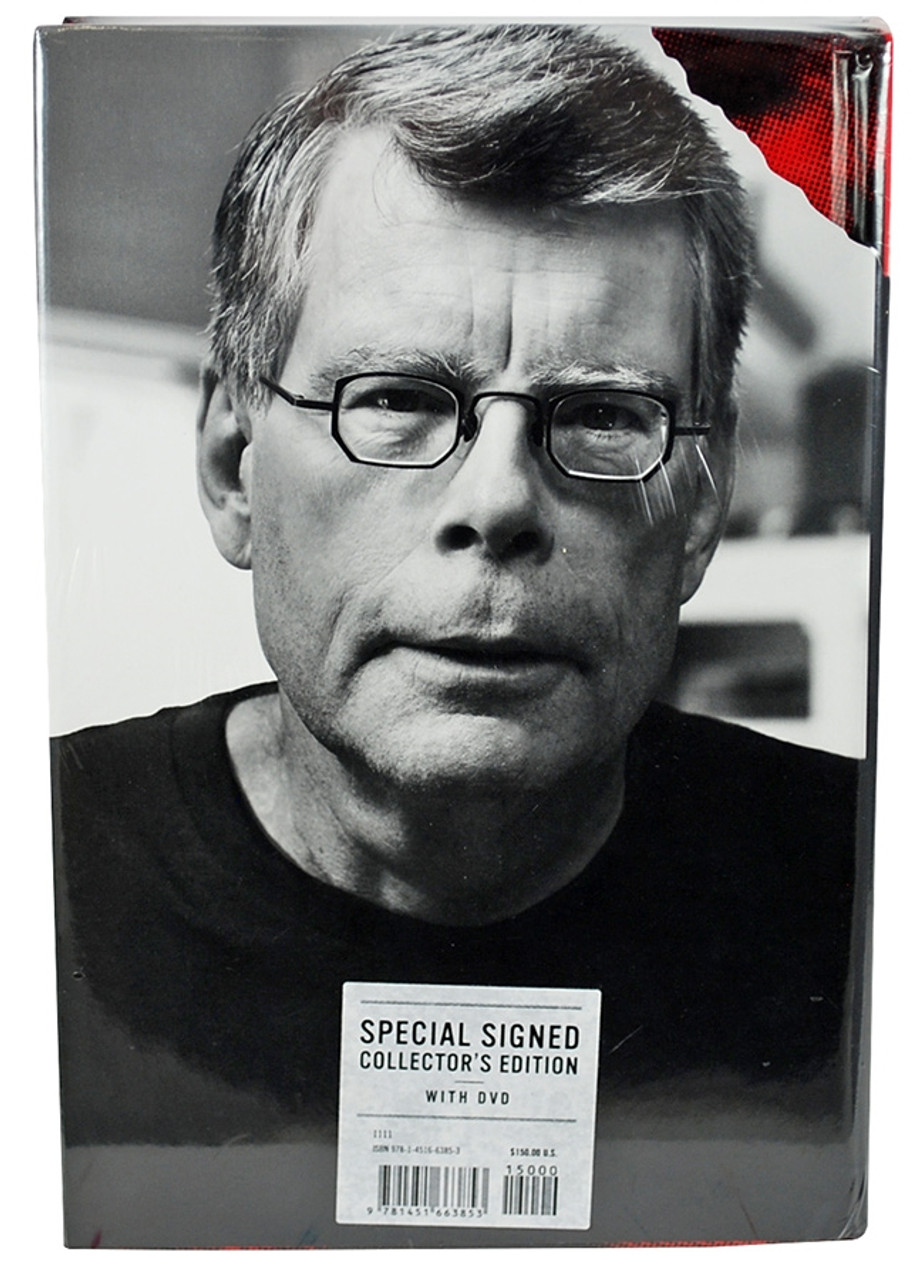 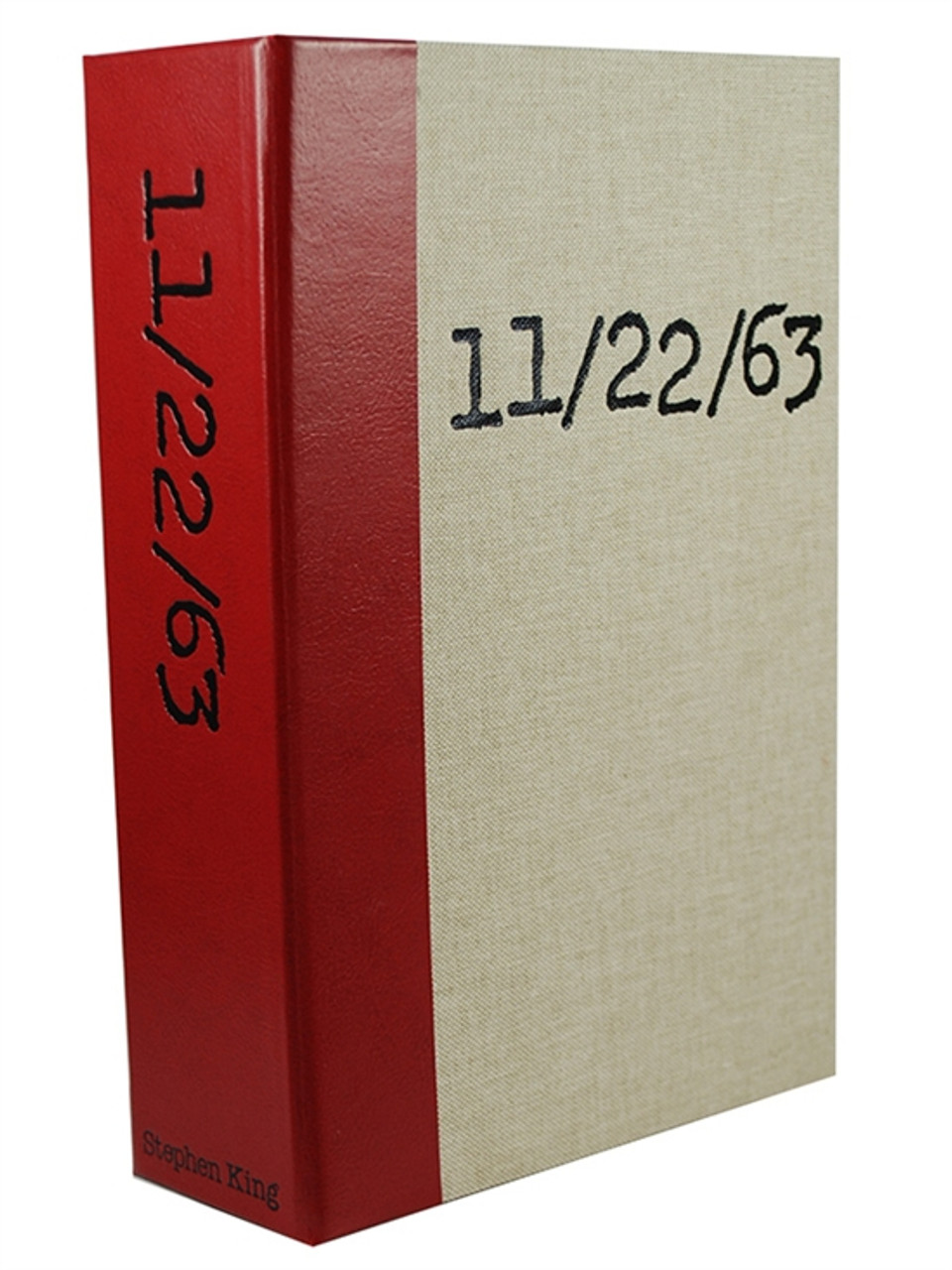 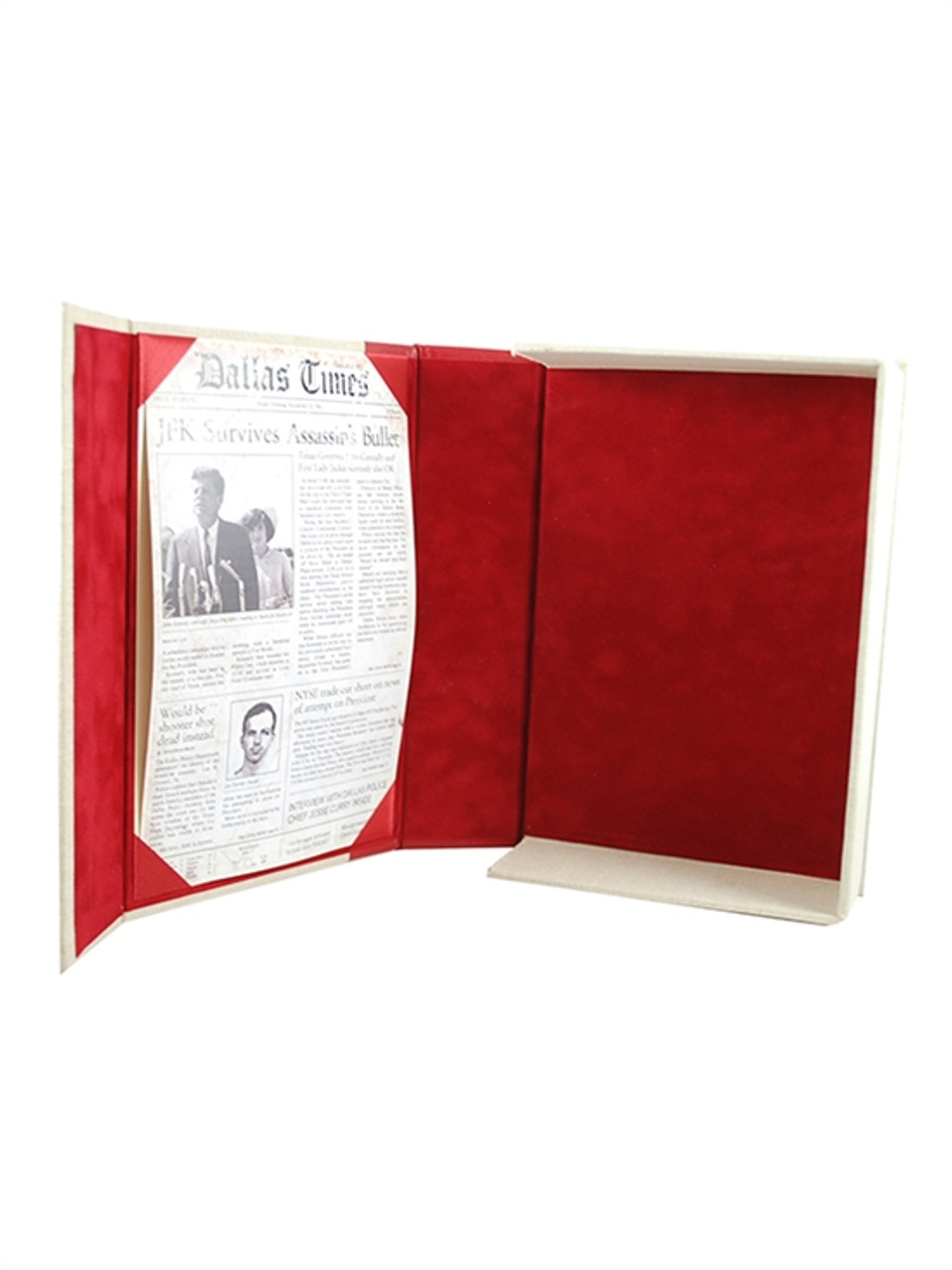 Personally Signed by Stephen King And Limited To Only 1,000

Scribner 2011. Stephen King "11/22/63" Signed Limited Edition of only 1,000 signed copies available. Includes collector's box and original DVD from the publisher. This was released direct from the publisher with only 850 available to the public.

About Tray Case: This custom traycase is wrapped in a cream linen and leatherette & snaps shut with neodymium magnets. Inside is a two sided placard featuring news events from both timelines of 11/22/63.

This sheet was created by obtaining a real evening newspaper from November 22nd 1963. The articles that appear in "our" timeline are all taken and paraphrased from that actual newspaper. So the facts contained, such as the times of the events, the capture of Oswald, are all accurate based on the real newspaper they were taken from.

For the "alternate" timeline the news story was re-written but facts were kept in line with the events in the book and side articles such as the closing numbers of the stock exchange, etc are all accurate based on what was reported in the real newspaper that day.

The print is in color to match the color scheme of the book dust-jacket.

On November 22, 1963, three shots rang out in Dallas, President Kennedy died, and the world changed. What if you could change it back? Stephen King's heart-stoppingly dramatic new novel is about a man who travels back in time to prevent the JFK assassination—a thousand page tour de force.

Following his massively successful novel Under the Dome, King sweeps readers back in time to another moment—a real life moment—when everything went wrong: the JFK assassination. And he introduces readers to a character who has the power to change the course of history.

Jake Epping is a thirty-five-year-old high school English teacher in Lisbon Falls, Maine, who makes extra money teaching adults in the GED program. He receives an essay from one of the students—a gruesome, harrowing first person story about the night 50 years ago when Harry Dunning's father came home and killed his mother, his sister, and his brother with a hammer.

Harry escaped with a smashed leg, as evidenced by his crooked walk. Not much later, Jake's friend Al, who runs the local diner, divulges a secret: his storeroom is a portal to 1958. He enlists Jake on an insane—and insanely possible—mission to try to prevent the Kennedy assassination. So begins Jake's new life as George Amberson and his new world of Elvis and JFK, of big American cars and sock hops, of a troubled loner named Lee Harvey Oswald and a beautiful high school librarian named Sadie Dunhill, who becomes the love of Jake's life—a life that transgresses all the normal rules of time.

A tribute to a simpler era and a devastating exercise in escalating suspense, 11/22/63 is Stephen King at his epic best.

'Fine stories to take with us into the night.' -- Neil Gaiman on FULL DARK, NO STARS in the Guardian

'King's gift of storytelling is unrivalled. His ferocious imagination is unlimited.' -- George Pelecanos

'King's most purely entertaining novel in years ... utterly compelling.' -- John Connolly on UNDER THE DOME

'Staggeringly addictive.' -- USA Today on UNDER THE DOME

'Tight and energetic from start to finish.' -- New York Times on UNDER THE DOME

'The pedal is indeed to the metal.' -- Guardian on UNDER THE DOME

'Delivers a lot of praise and enjoy. The story comes off the blocks with almost alarming speed ... he tells a story like a pro ... 11.22.63 kept me up all night.' -- Daily Telegraph

'Not just an accomplished time-travel yarn but an action-heavy meditation on chance, choice and fate.' -- Independent Books of the Year

Stephen Edwin King (born September 21, 1947) is an American author of horror, supernatural fiction, suspense, science fiction and fantasy. His books have sold more than 350 million copies, many of which have been adapted into feature films, miniseries, television series, and comic books. King has published 58 novels, including seven under the pen name Richard Bachman, and six non-fiction books. He has written around 200 short stories, most of which have been published in book collections.
VERY FINE GUARANTEED. Sealed in the original shrink-wrap. Please see the detailed photos. Includes a Custom Tray Case for display and protection.

"REVENGE IS A DISH BEST SERVED COLD" Personally signed by Stephen King and limited to only 1,000 A rare signed limited edition for the King colle