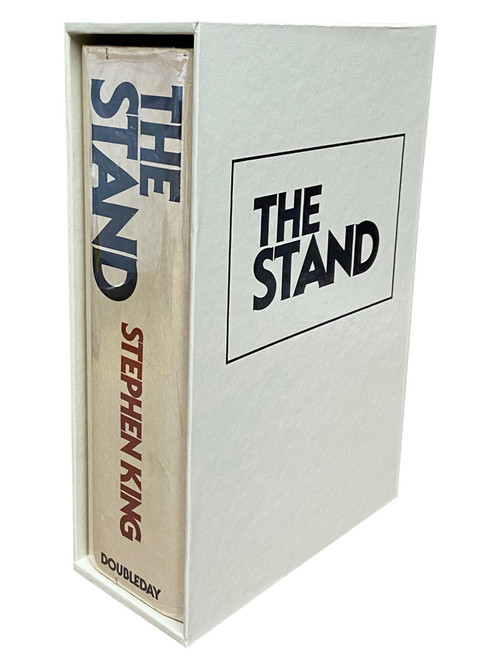 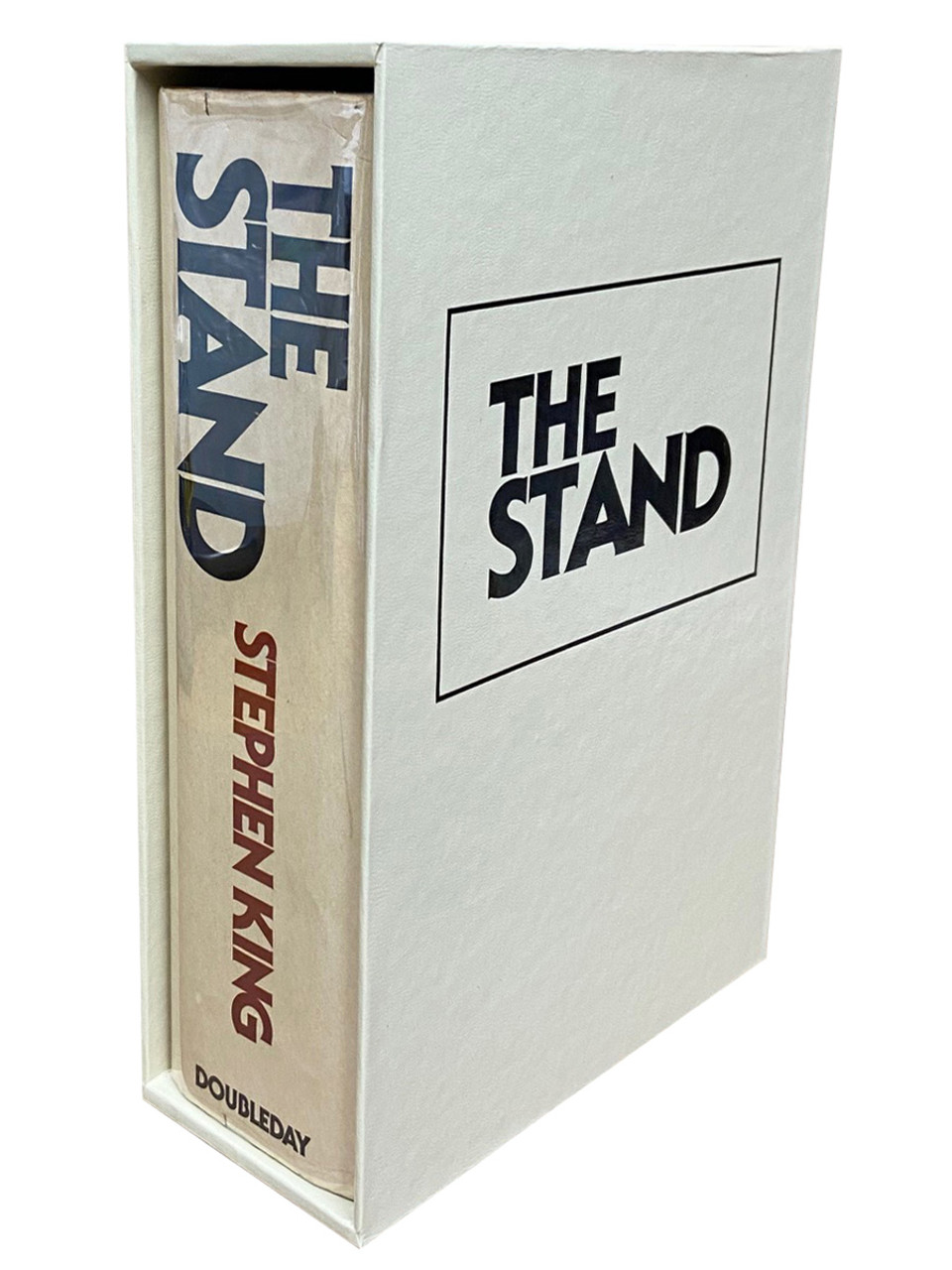 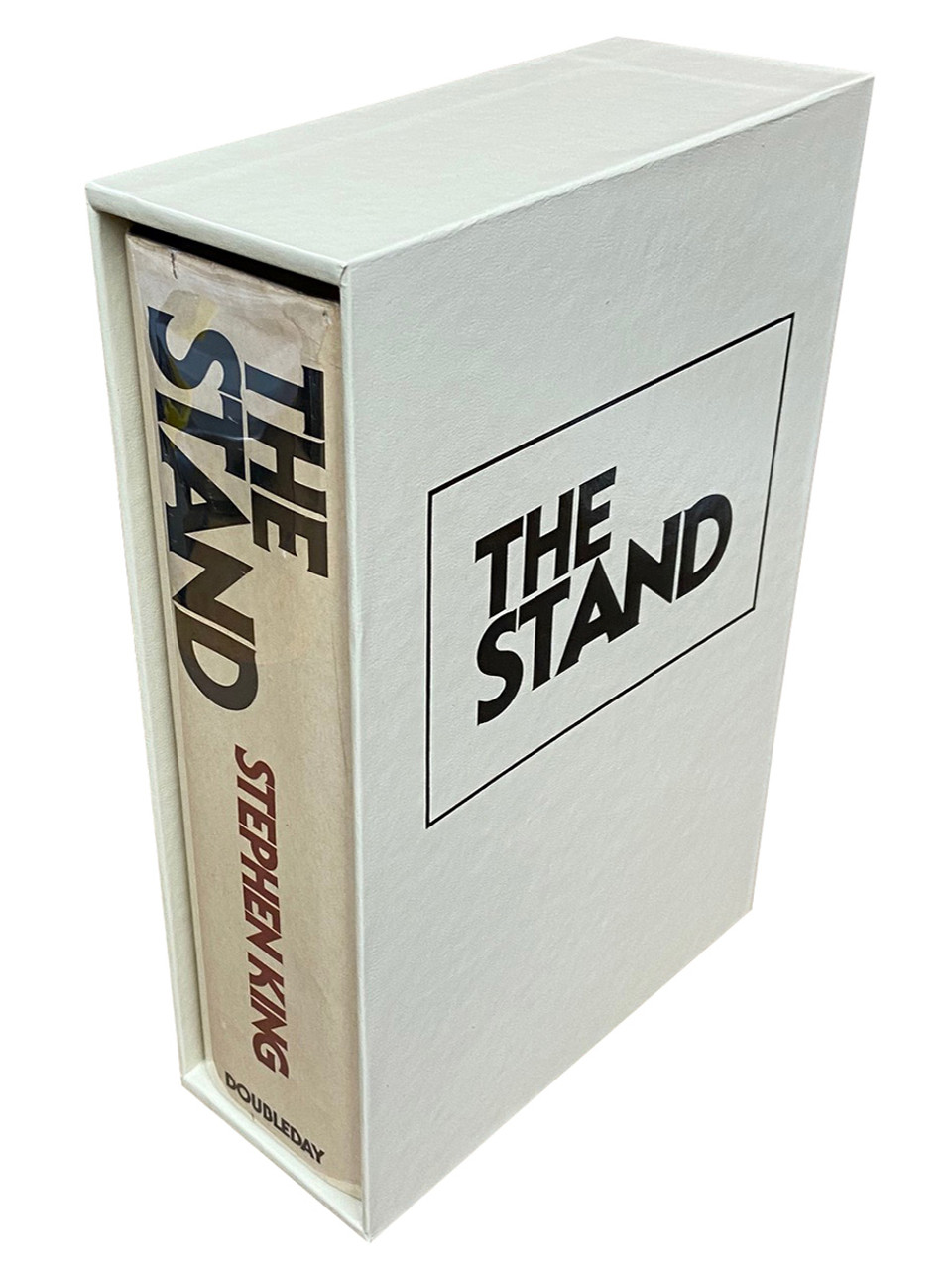 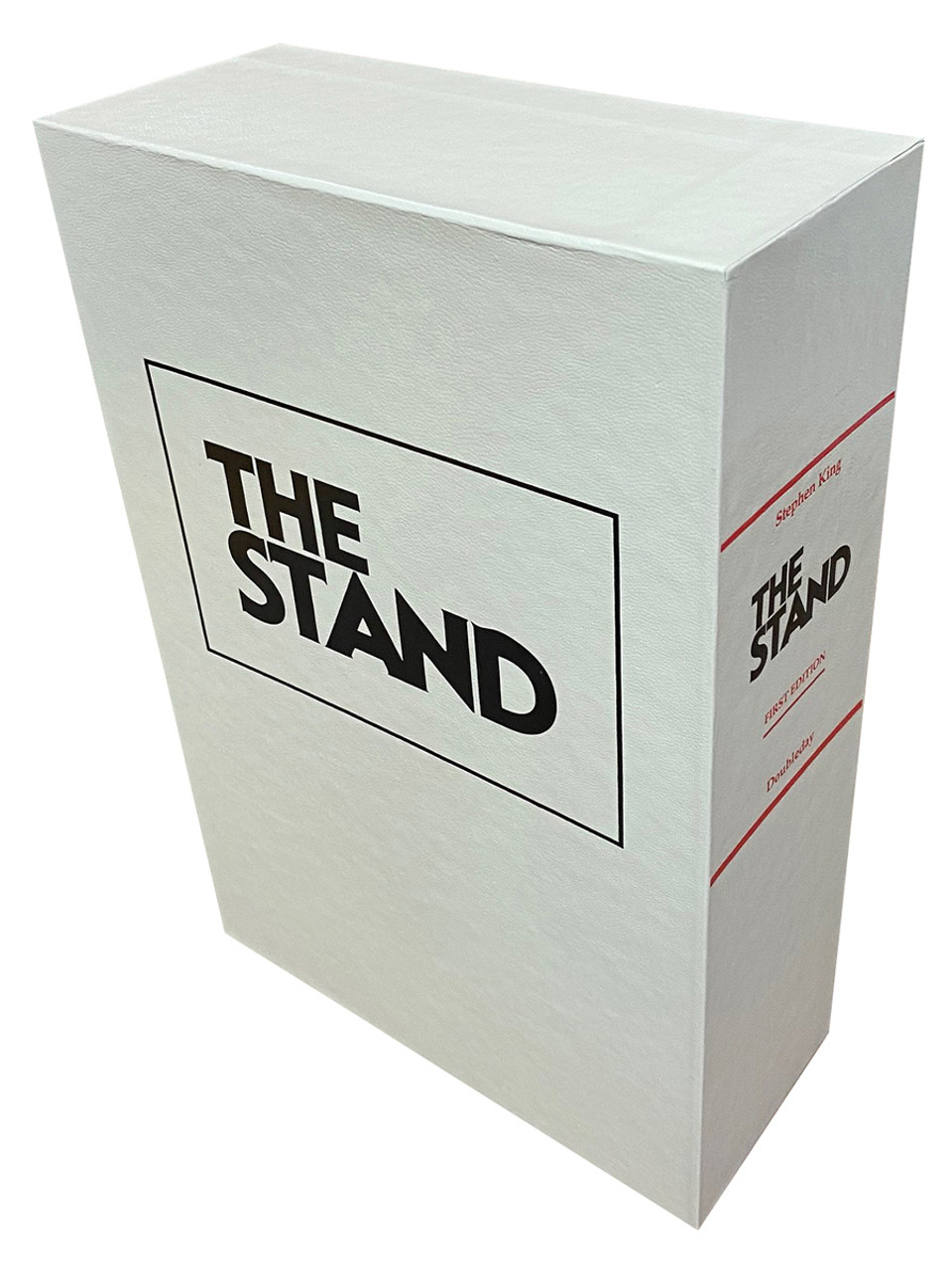 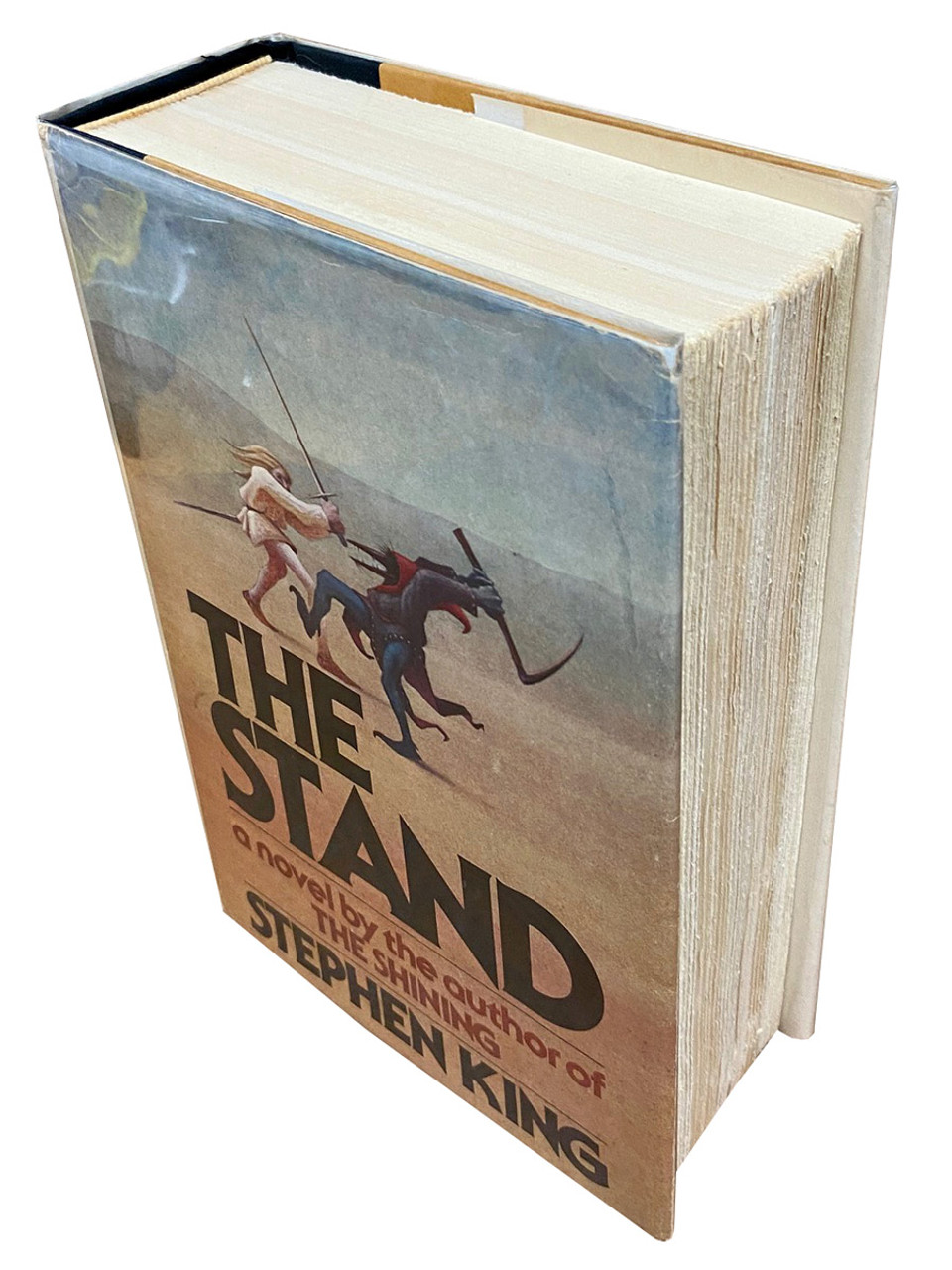 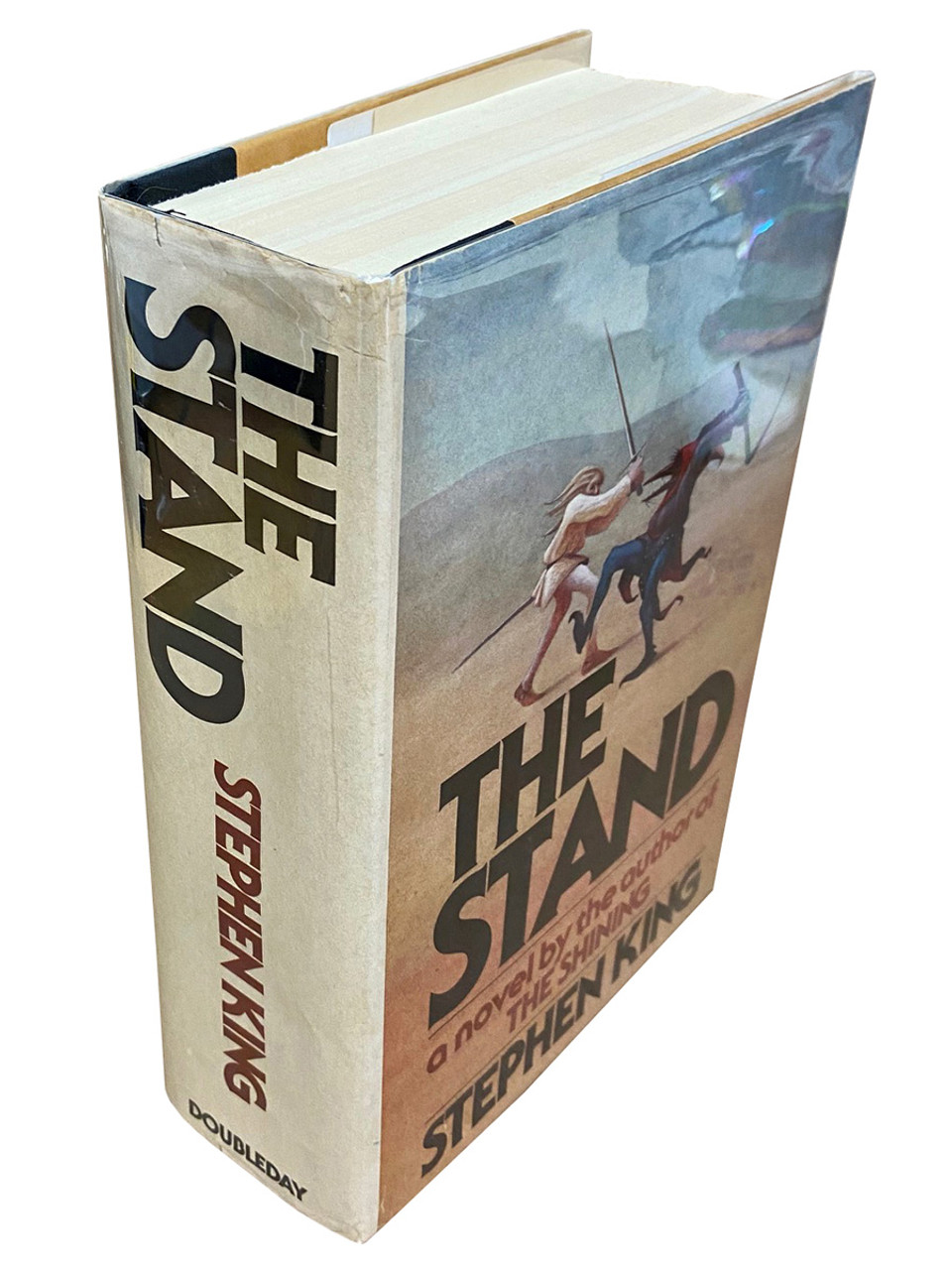 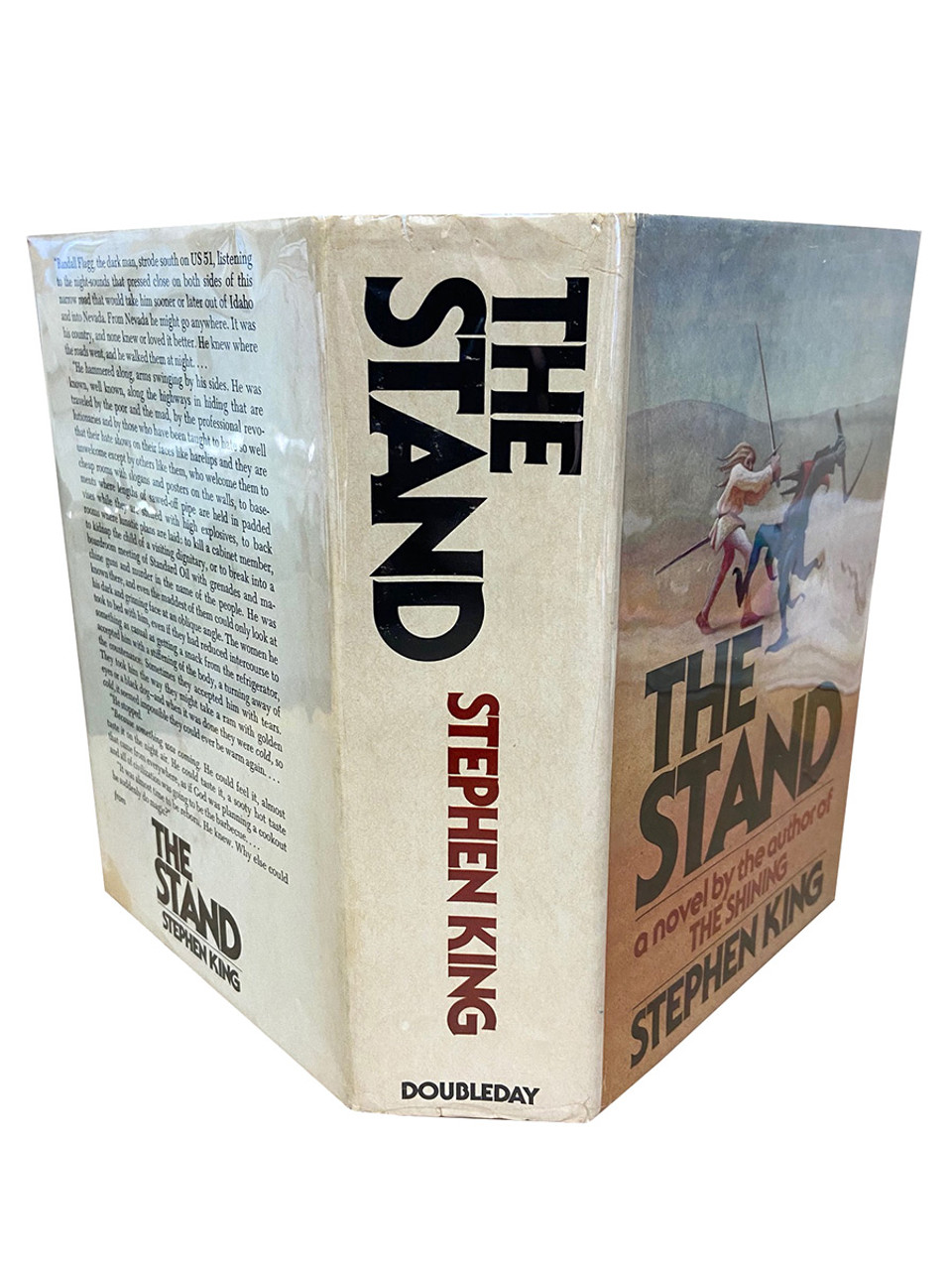 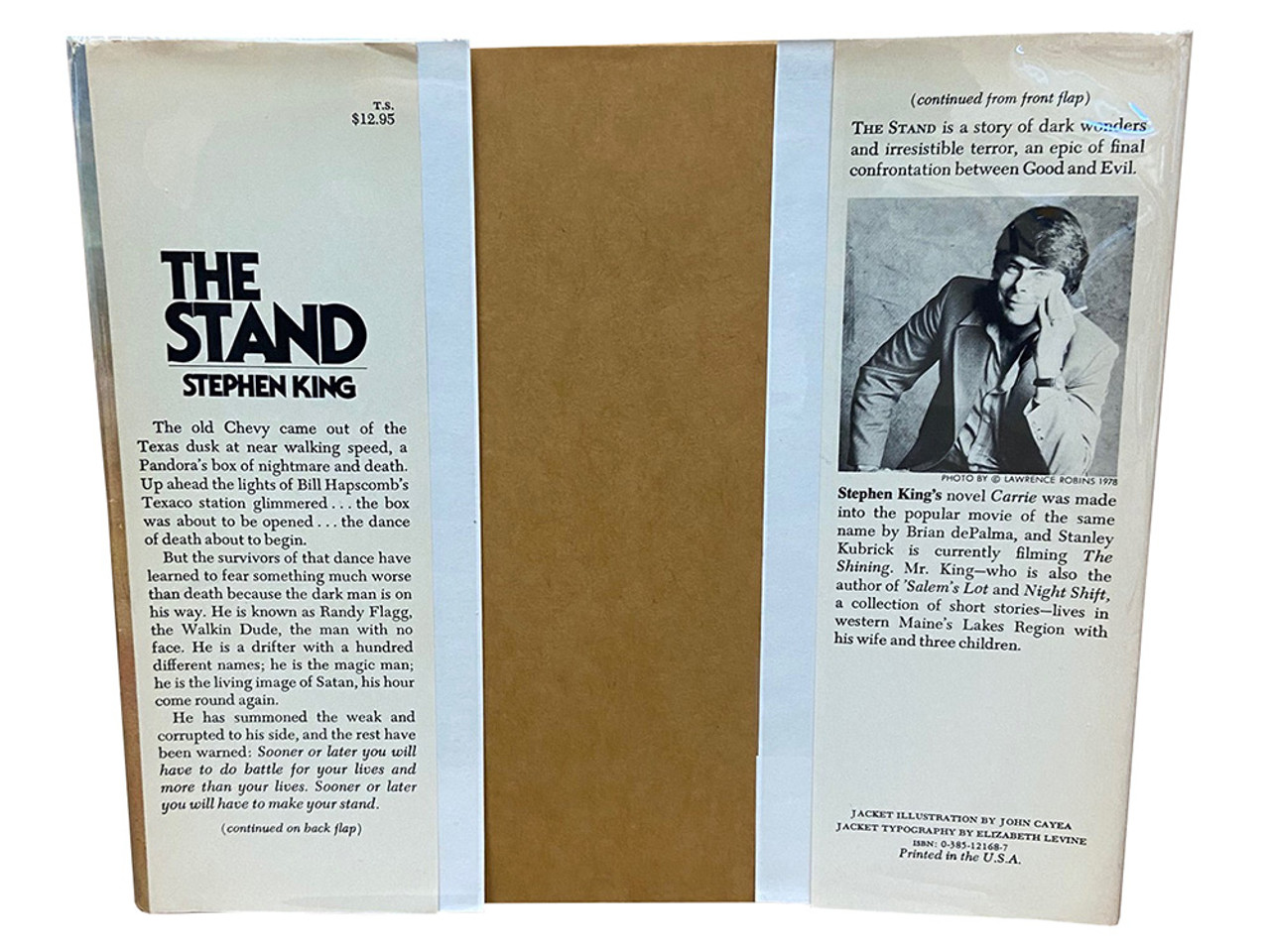 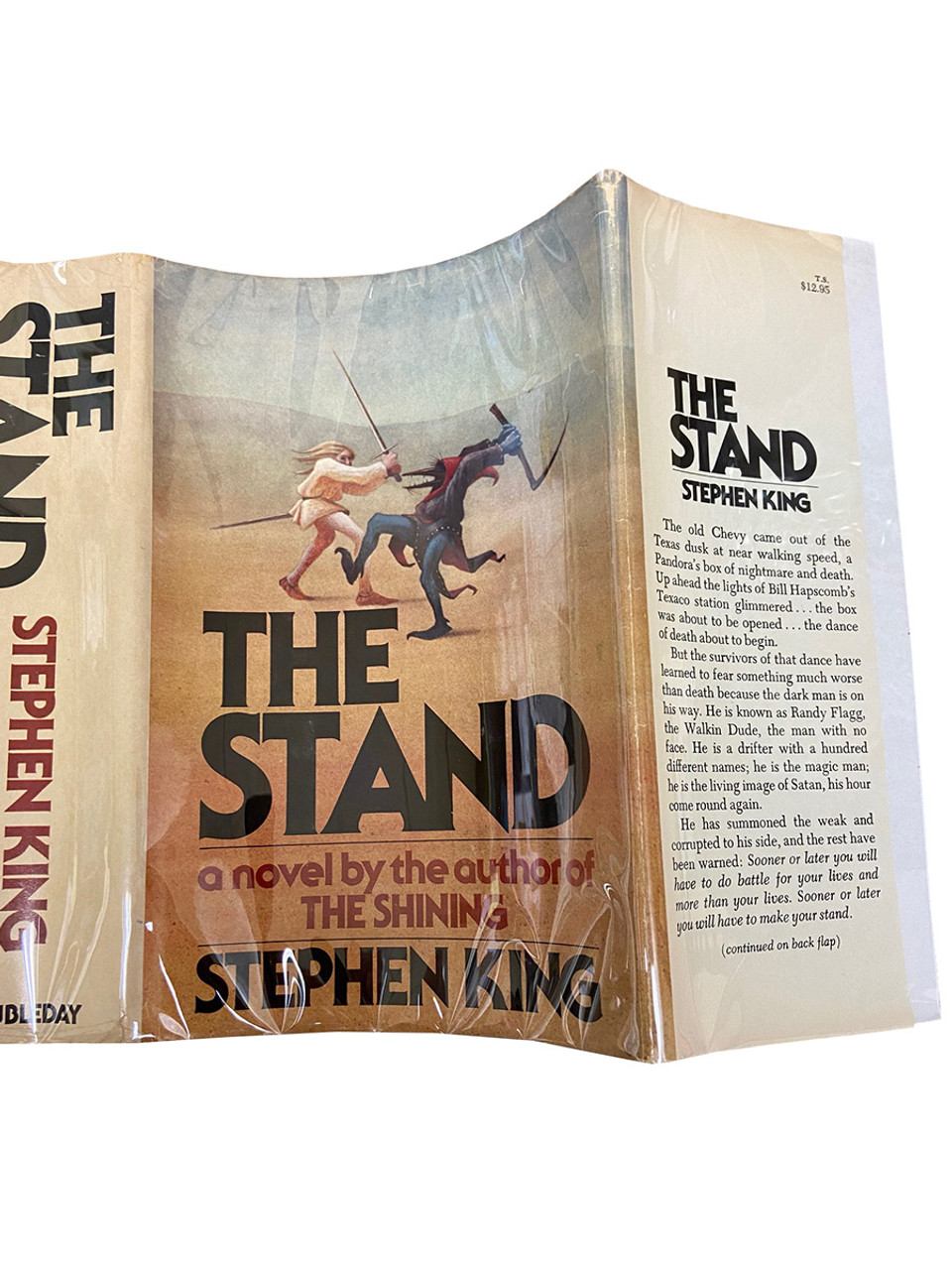 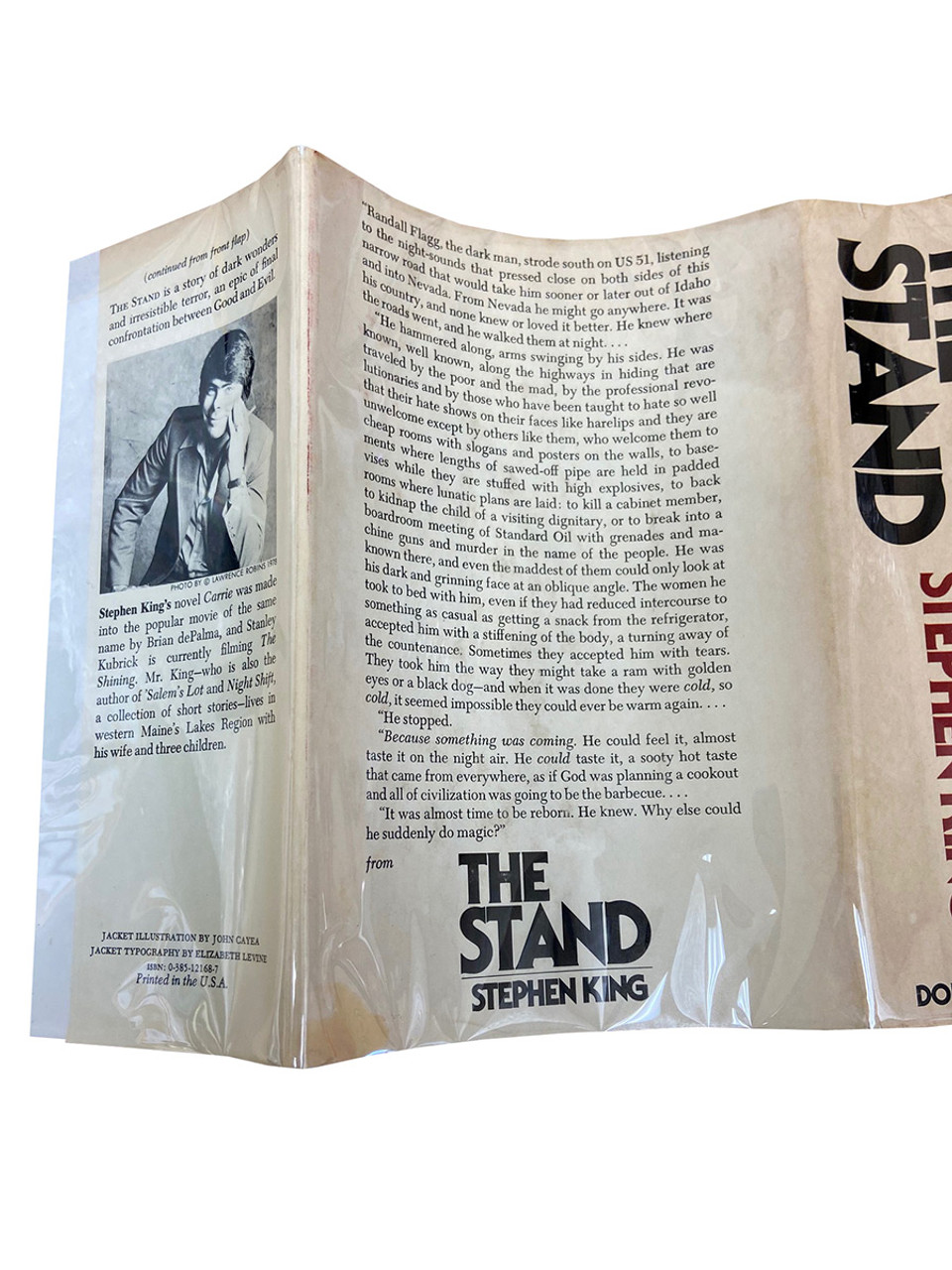 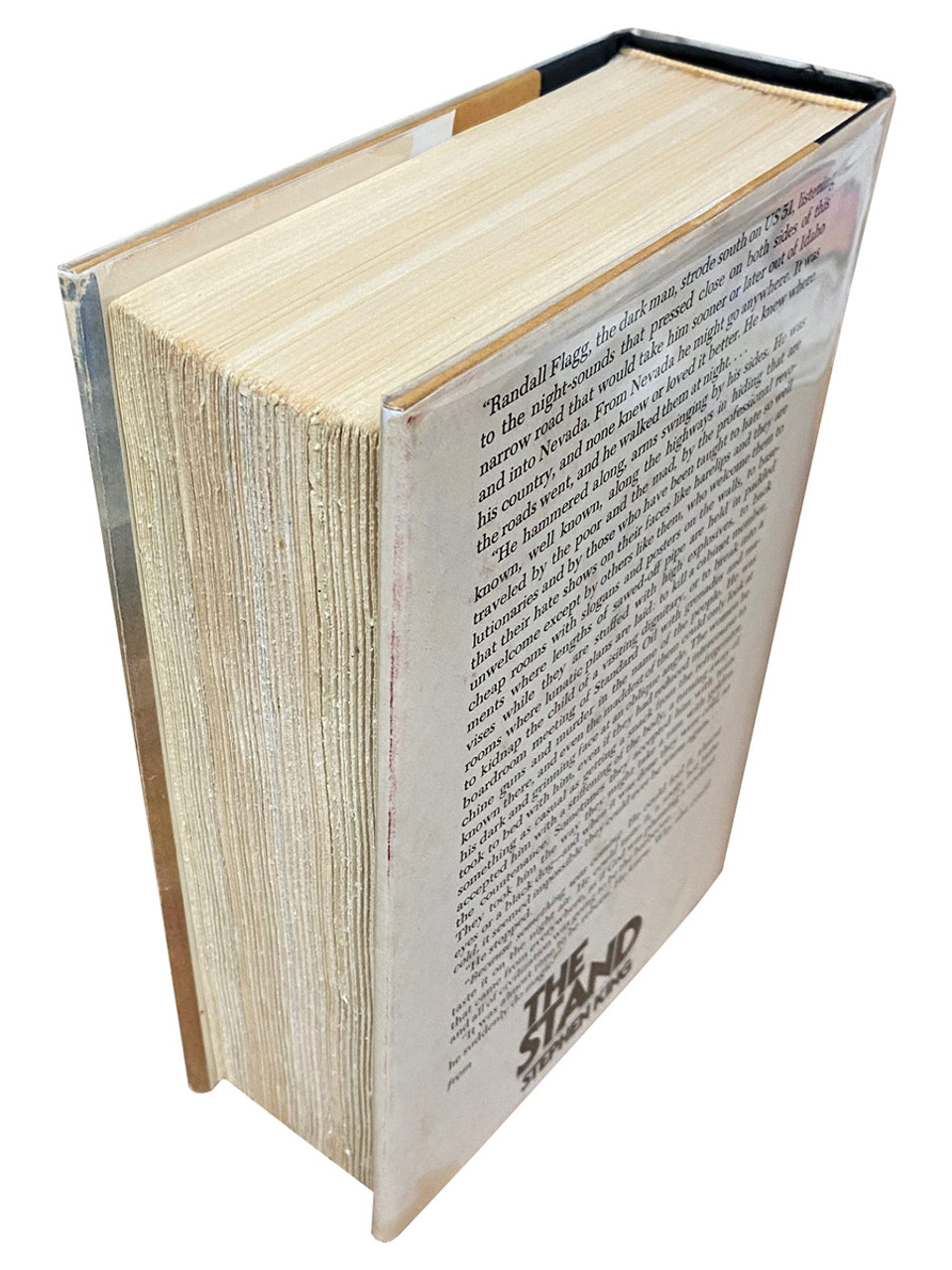 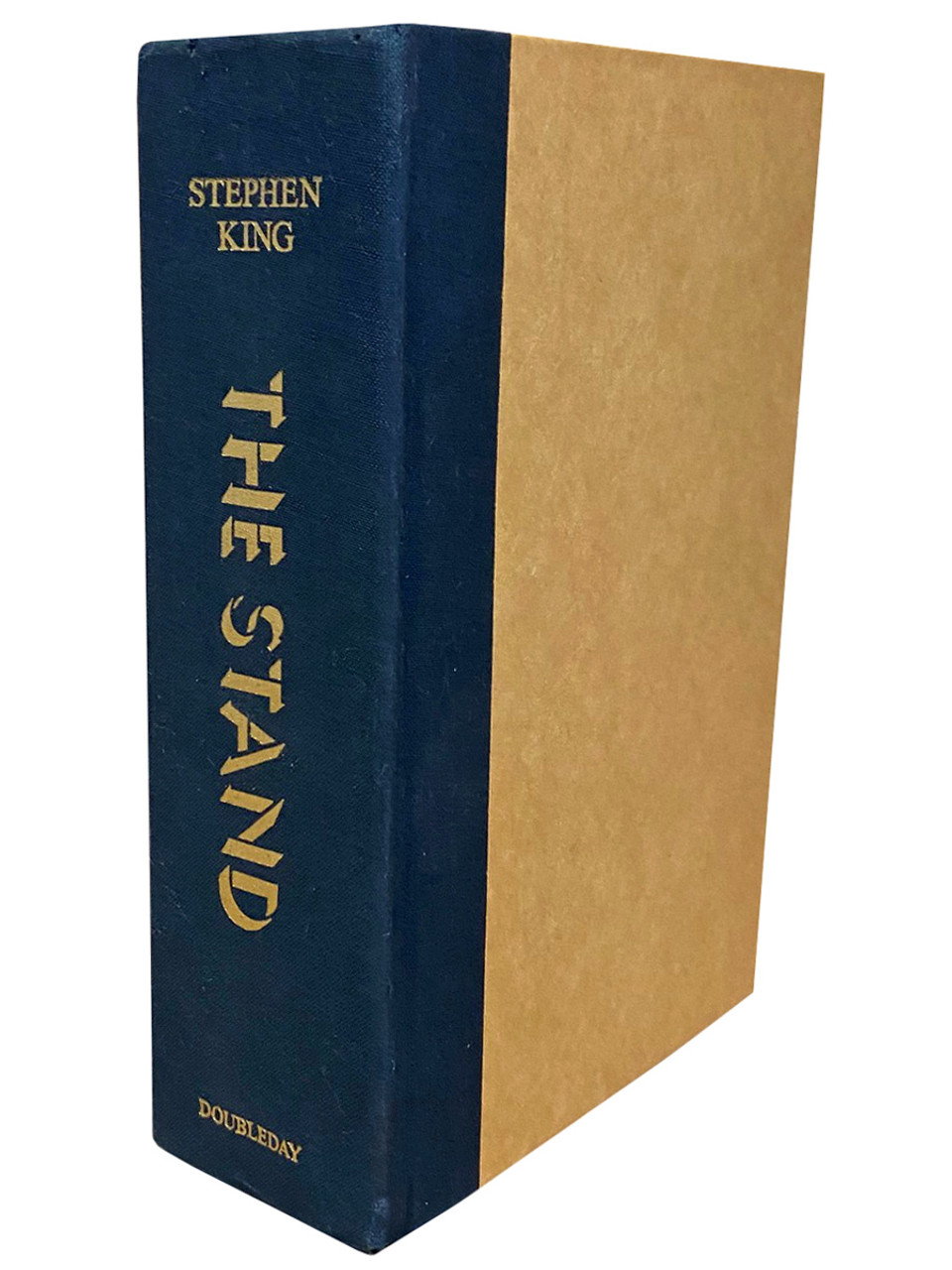 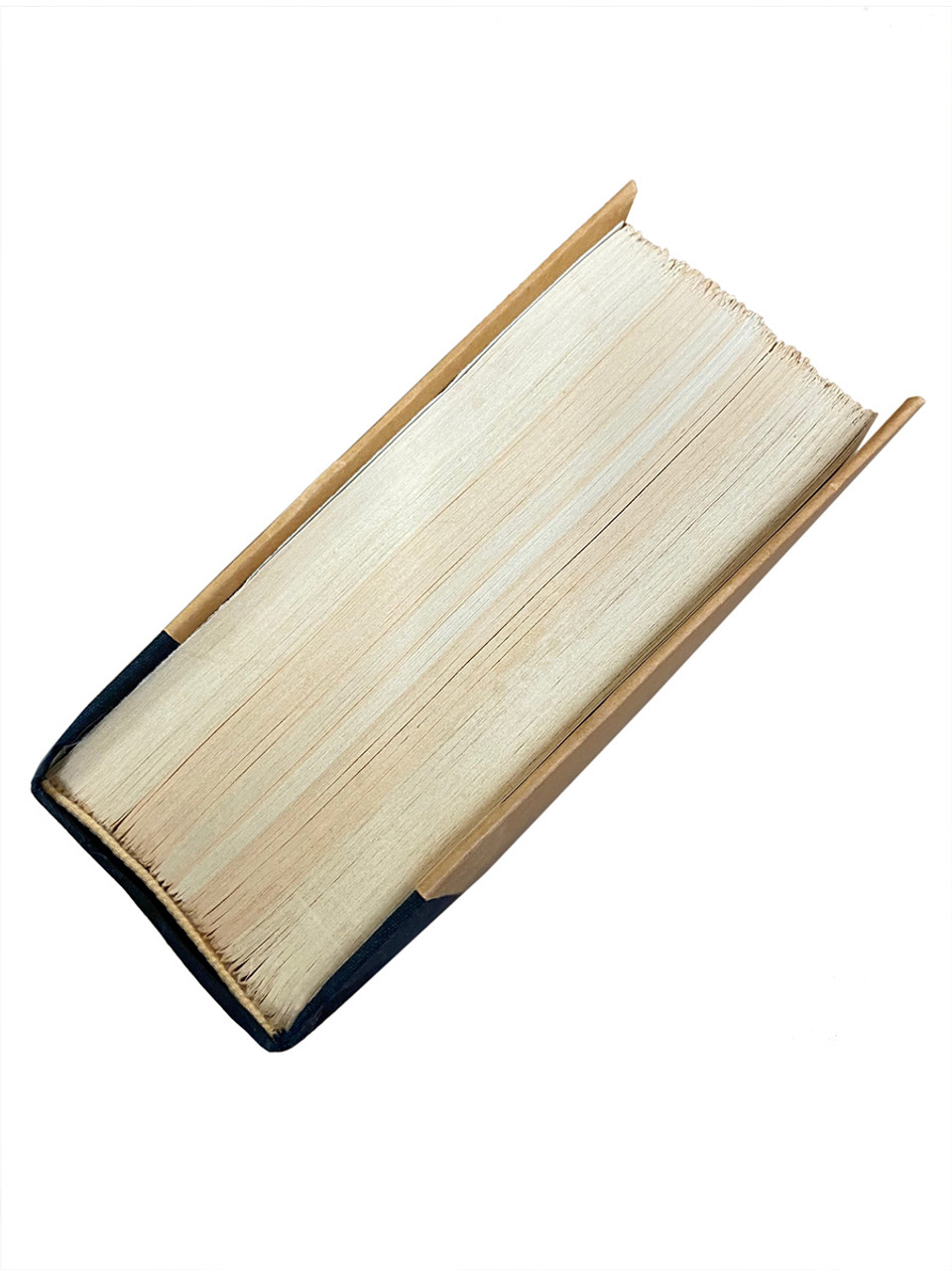 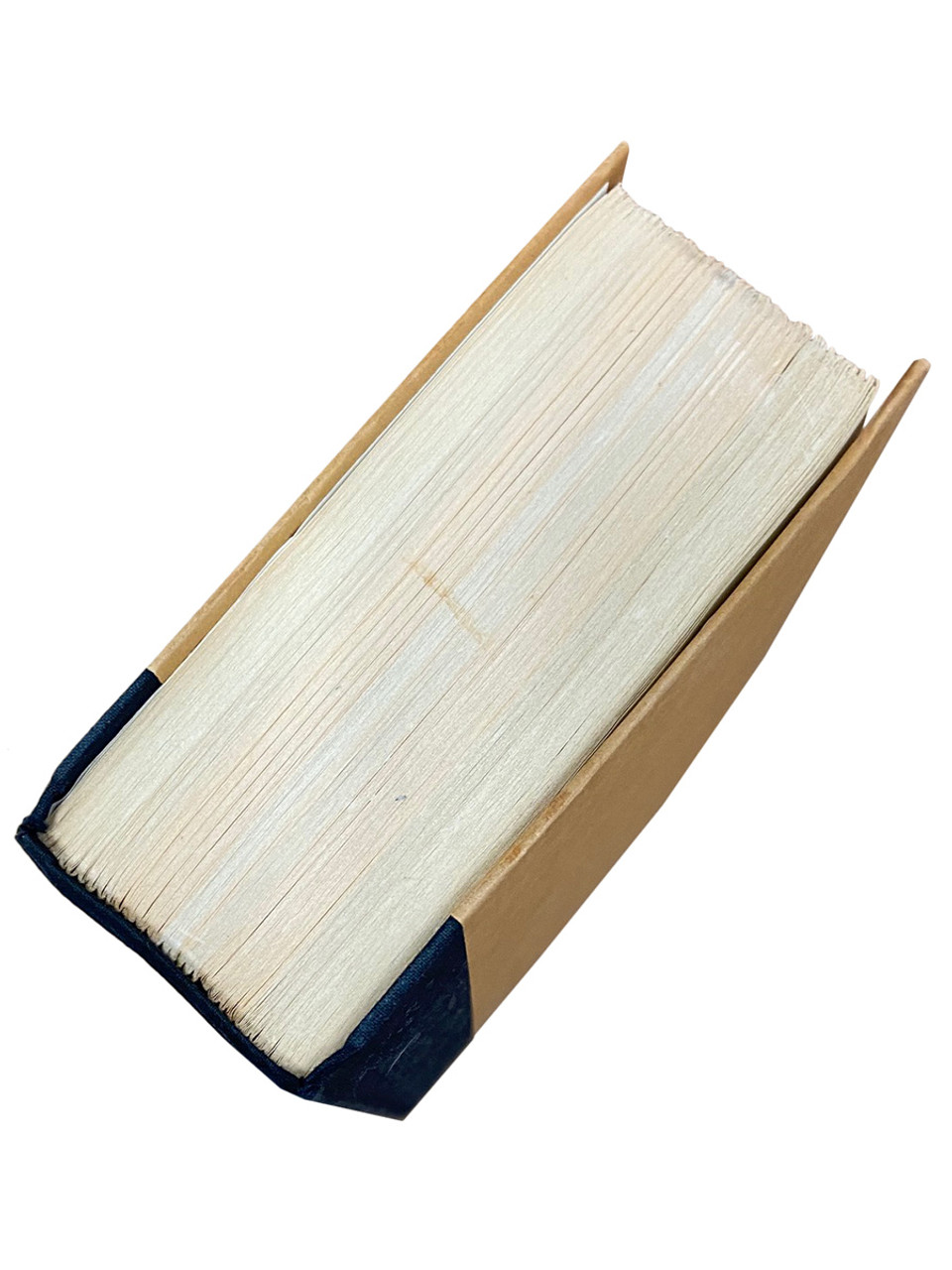 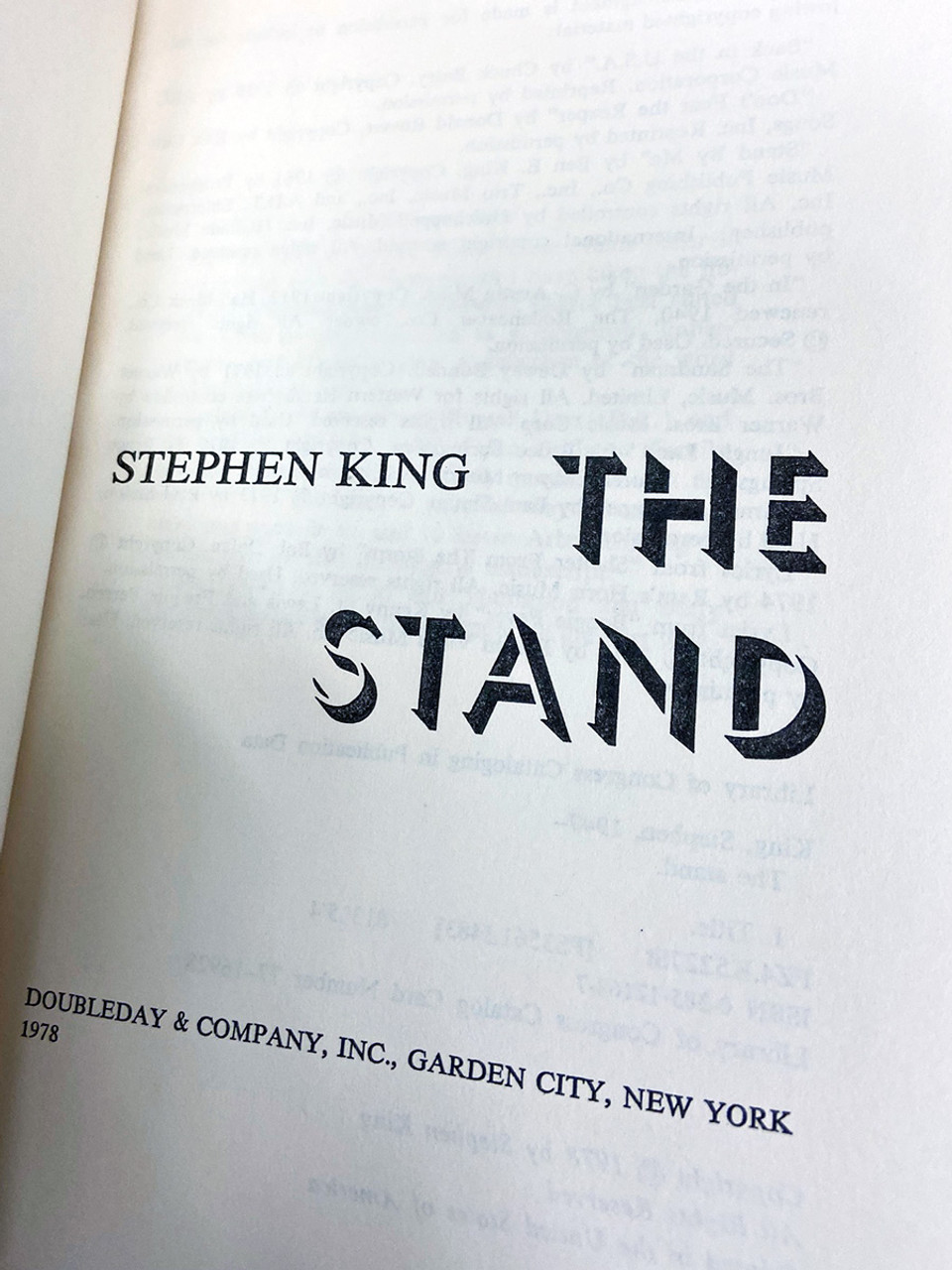 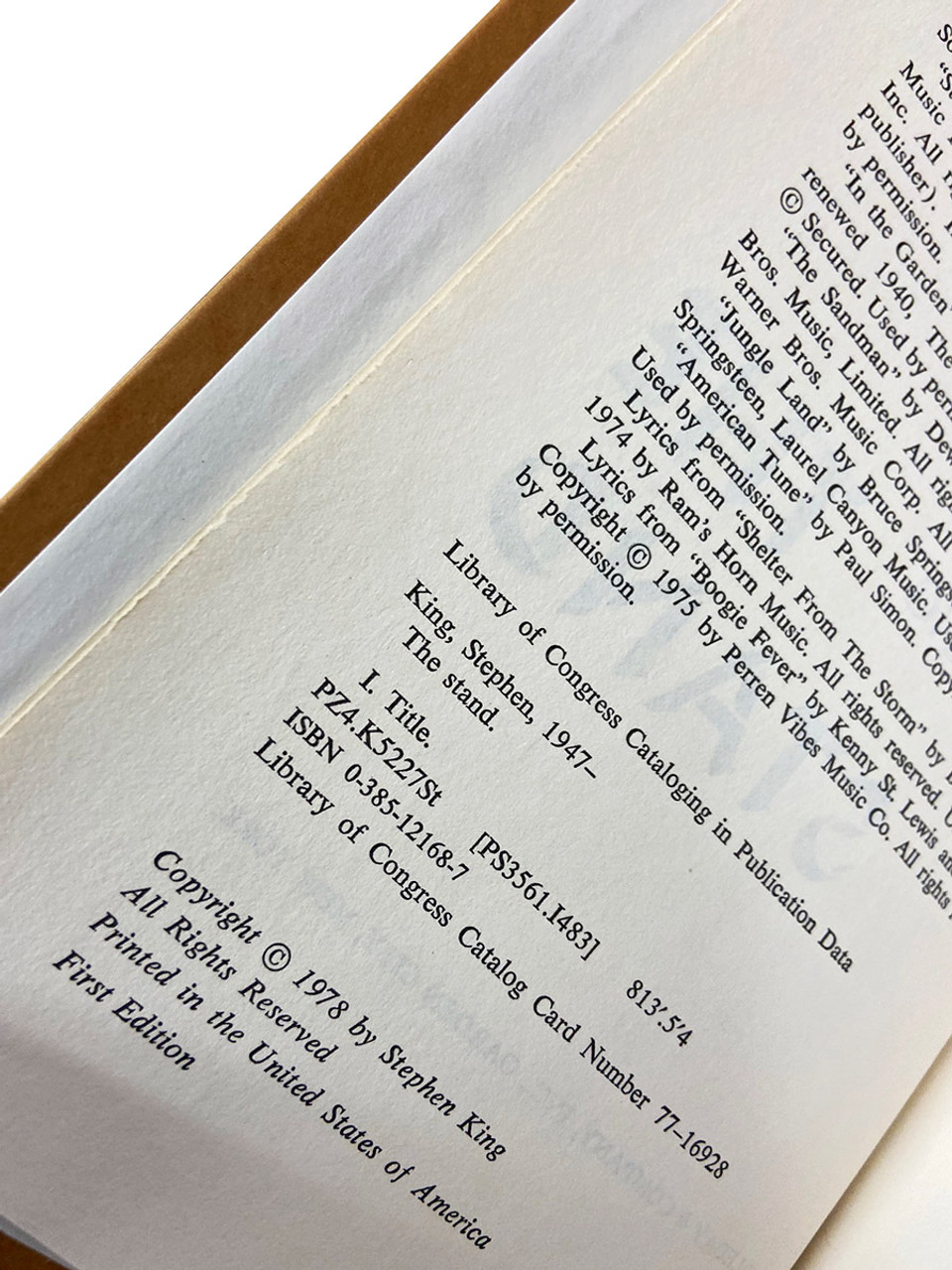 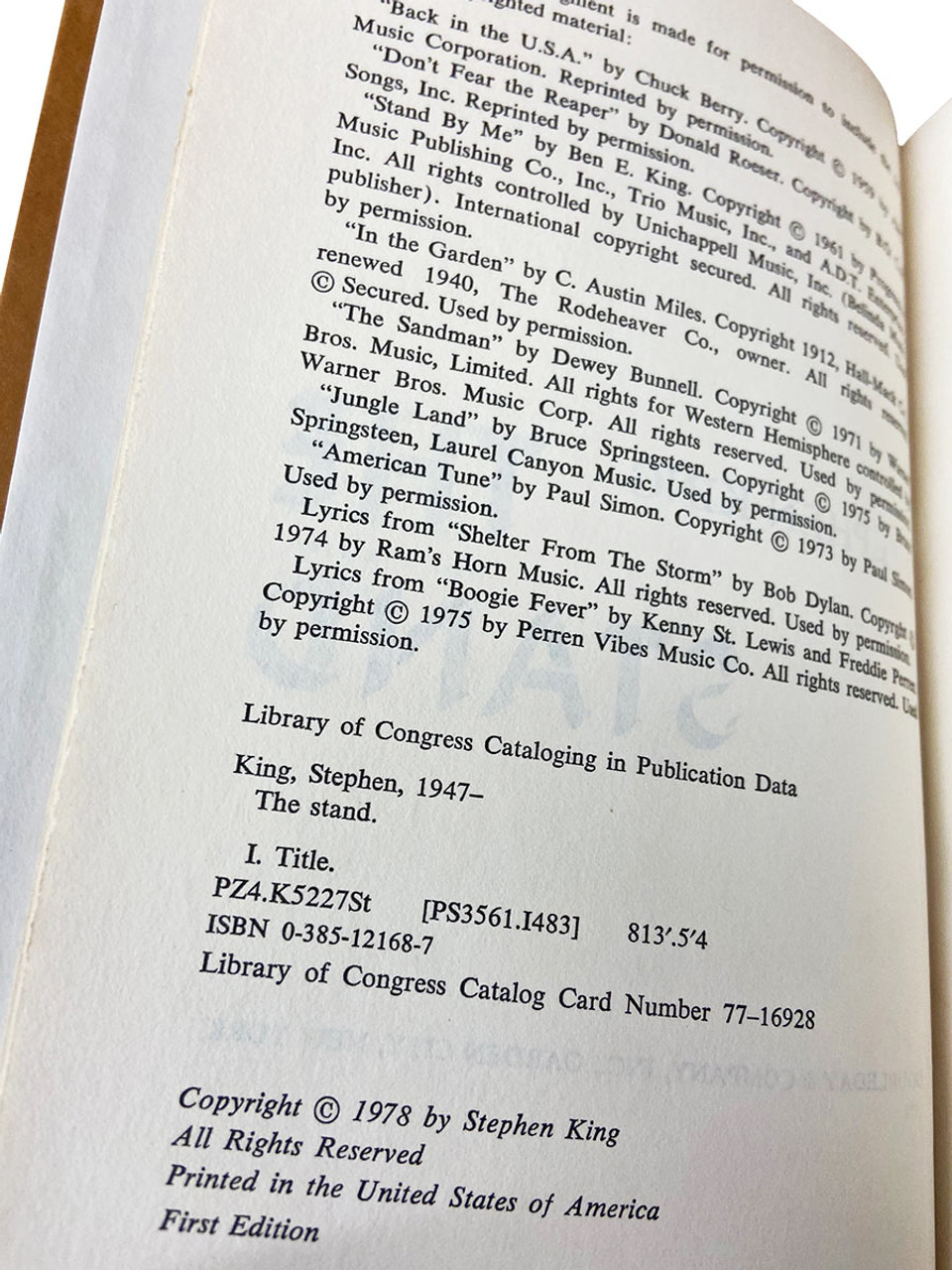 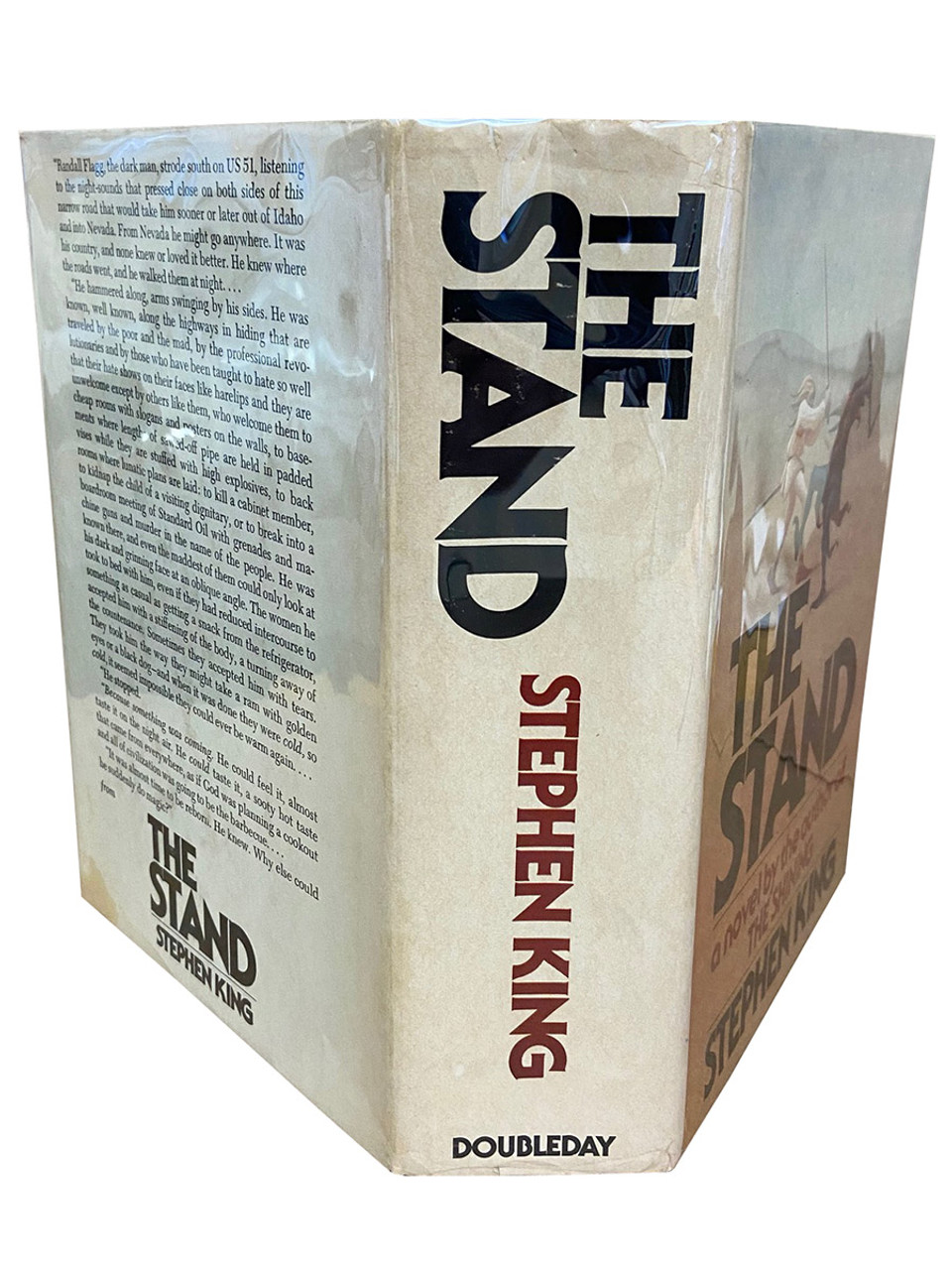 "As brilliant a dark dream as has ever been dreamed in this century."--Palm Beach Post

All original - vintage King. A rare collector's grade book in this condition.

This edition is missing around a quarter of the original text . In 1990 Doubleday released a 400,000 copy 1st edition of the "Complete and Uncut!" The Stand for $24.95. On the copyright page you will see the words First Trade Edition.

In 1978, science fiction writer Spider Robinson wrote a scathing review of The Stand in which he exhorted his readers to grab strangers in bookstores and beg them not to buy it. The Stand is like that. You either love it or hate it, but you can't ignore it. Stephen King's most popular book, according to polls of his fans, is an end-of-the-world scenario: a rapidly mutating flu virus is accidentally released from a U.S. military facility and wipes out 99 and 44/100 percent of the world's population, thus setting the stage for an apocalyptic confrontation between Good and Evil. "I love to burn things up," King says. "It's the werewolf in me, I guess.... The Stand was particularly fulfilling, because there I got a chance to scrub the whole human race, and man, it was fun! ... Much of the compulsive, driven feeling I had while I worked on The Stand came from the vicarious thrill of imagining an entire entrenched social order destroyed in one stroke." There is much to admire in The Stand: the vivid thumbnail sketches with which King populates a whole landscape with dozens of believable characters; the deep sense of nostalgia for things left behind; the way it subverts our sense of reality by showing us a world we find familiar, then flipping it over to reveal the darkness underneath. Anyone who wants to know, or claims to know, the heart of the American experience needs to read this book.

The Stand is a post-apocalyptic dark fantasy novel written by American author Stephen King and first published in 1978 by Doubleday. The plot centers on a pandemic of a weaponized strain of influenza that kills almost the entire world population. The few survivors, united in groups, establish a new social system and engage in confrontation with each other. In writing the book, King sought to create an epic in the spirit of The Lord of the Rings that was set in contemporary America. King started writing The Stand in February 1975. The book was difficult for him to write because of the large number of characters and storylines.

In 1990, The Stand was reprinted as a Complete and Uncut Edition. King restored over 400 pages from texts that were initially reduced from his original manuscript, revised the order of the chapters, shifted the novel's setting from 1980 to 10 years forward, and accordingly corrected a number of cultural references. The Complete and Uncut Edition of The Stand is, Stephen King's longest stand-alone work at 1,152 pages, surpassing his 1,138-page novel It. The book has sold 4.5 million copies.

The Stand was highly appreciated by reviewers and is considered one of King's best novels. It has been included in lists of the best books of all time by Rolling Stone, Time, the Modern Library, Amazon and the BBC. Reviewers praised the believability of the story, the relevance of the issues raised and the liveliness of the characters, but criticized the protractedness of individual episodes, the plot dualism, and the deliberate denouement. A eponymous miniseries based on the novel was broadcast on ABC in 1994. From 2008 to 2012, Marvel Comics published a series of comics written by Roberto Aguirre-Sacasa and illustrated by Mike Perkins. A miniseries debuted on CBS All Access in December 2020, and finished airing in February 2021. 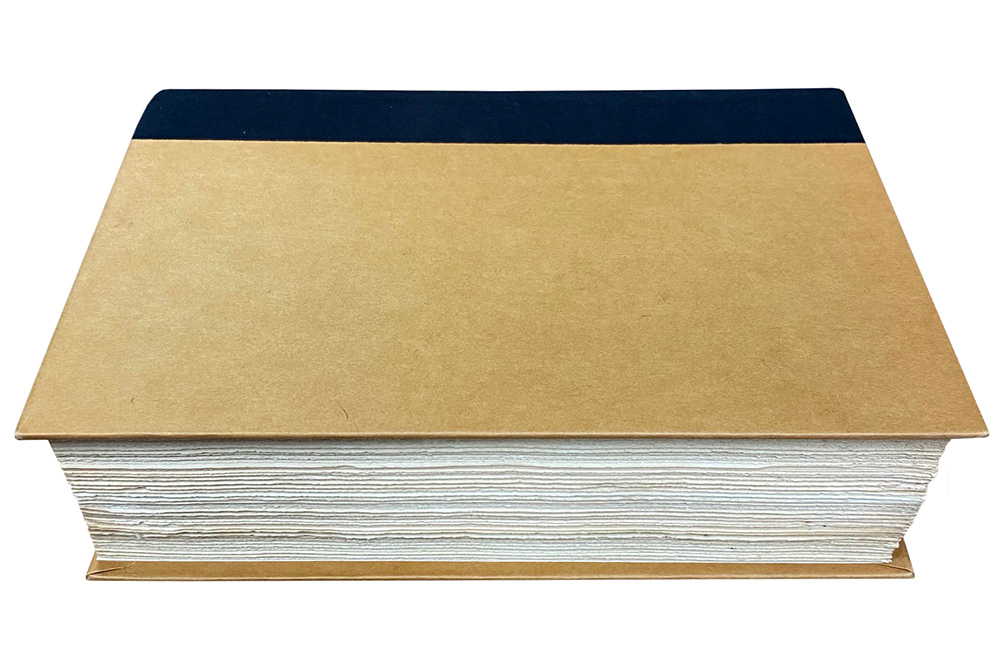 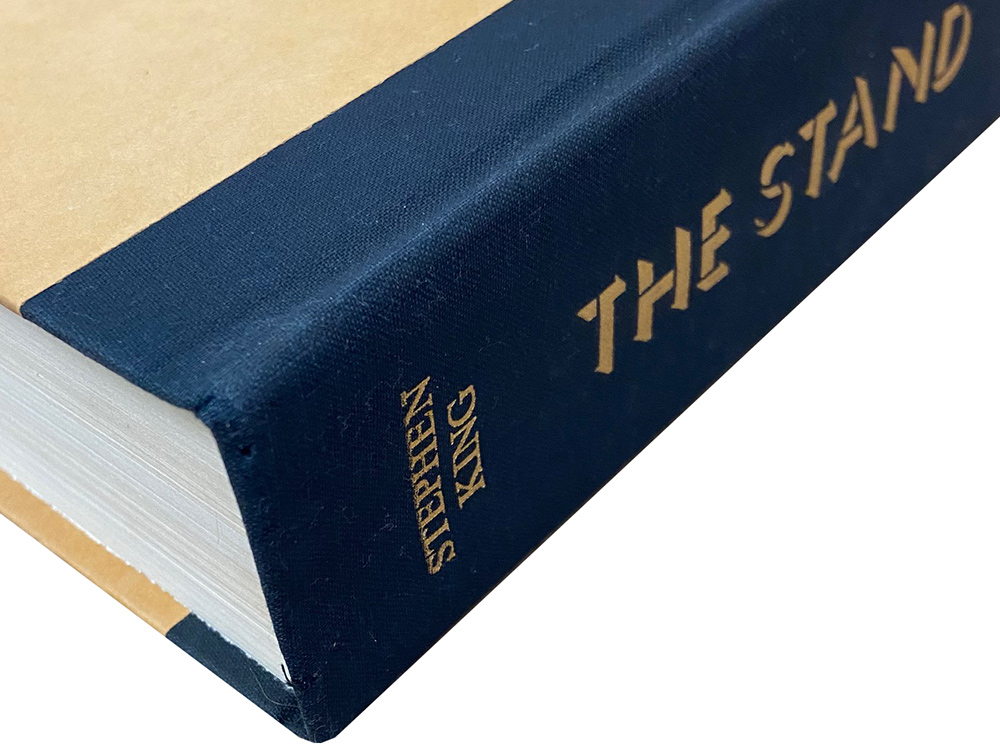 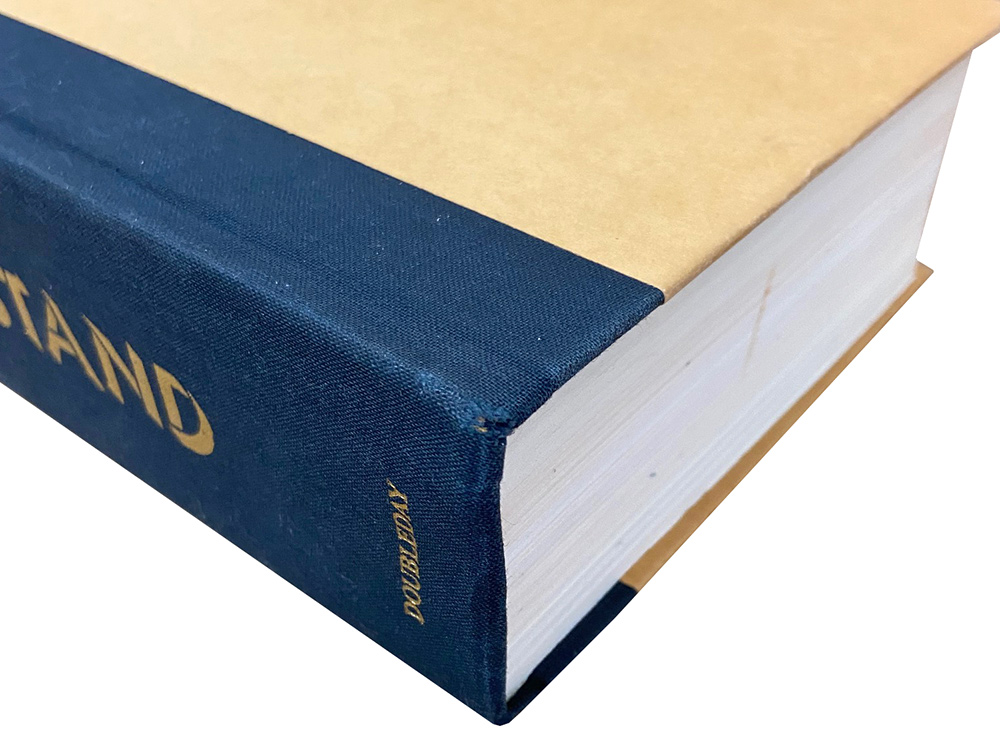 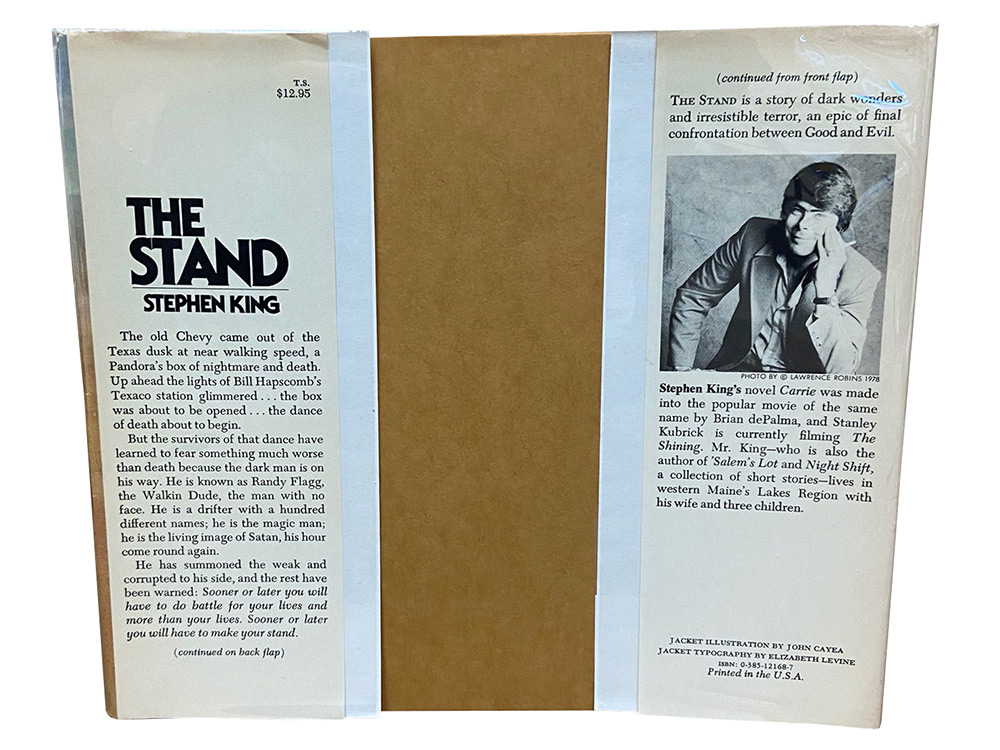 Stephen Edwin King (born September 21, 1947) is an American author of horror, supernatural fiction, suspense, science fiction and fantasy. His books have sold more than 350 million copies, many of which have been adapted into feature films, miniseries, television series, and comic books. King has published 58 novels, including seven under the pen name Richard Bachman, and six non-fiction books. He has written around 200 short stories, most of which have been published in book collections.
Hardcover: Fine. Appears unread with a square and tight spine. Sharp corners that are not bumped. No marks to the text block and free of any other marks, writings, or stamps. No attached bookplate or indication of one removed. Excellent original condition. Clean boards. A well-cared for book, protected from any potential damage.

Dust-jacket: Near Fine. Some light edge-wear and two small chips to extremities. Colors are bright and vibrant. One short closed tear at top of spine measuring less than 1/2" . The dust-jacket is now protected in a brand new Mylar archival sleeve. Not price-clipped. All photos of actual item.