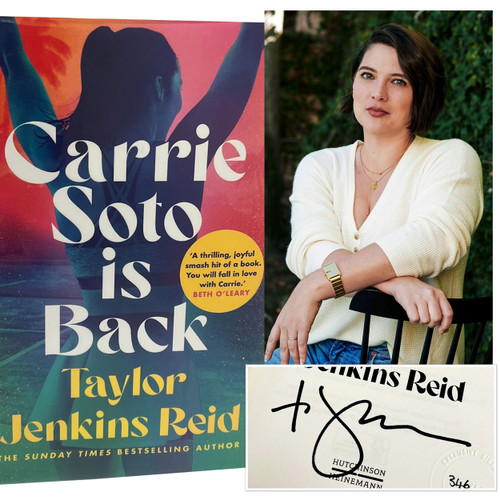 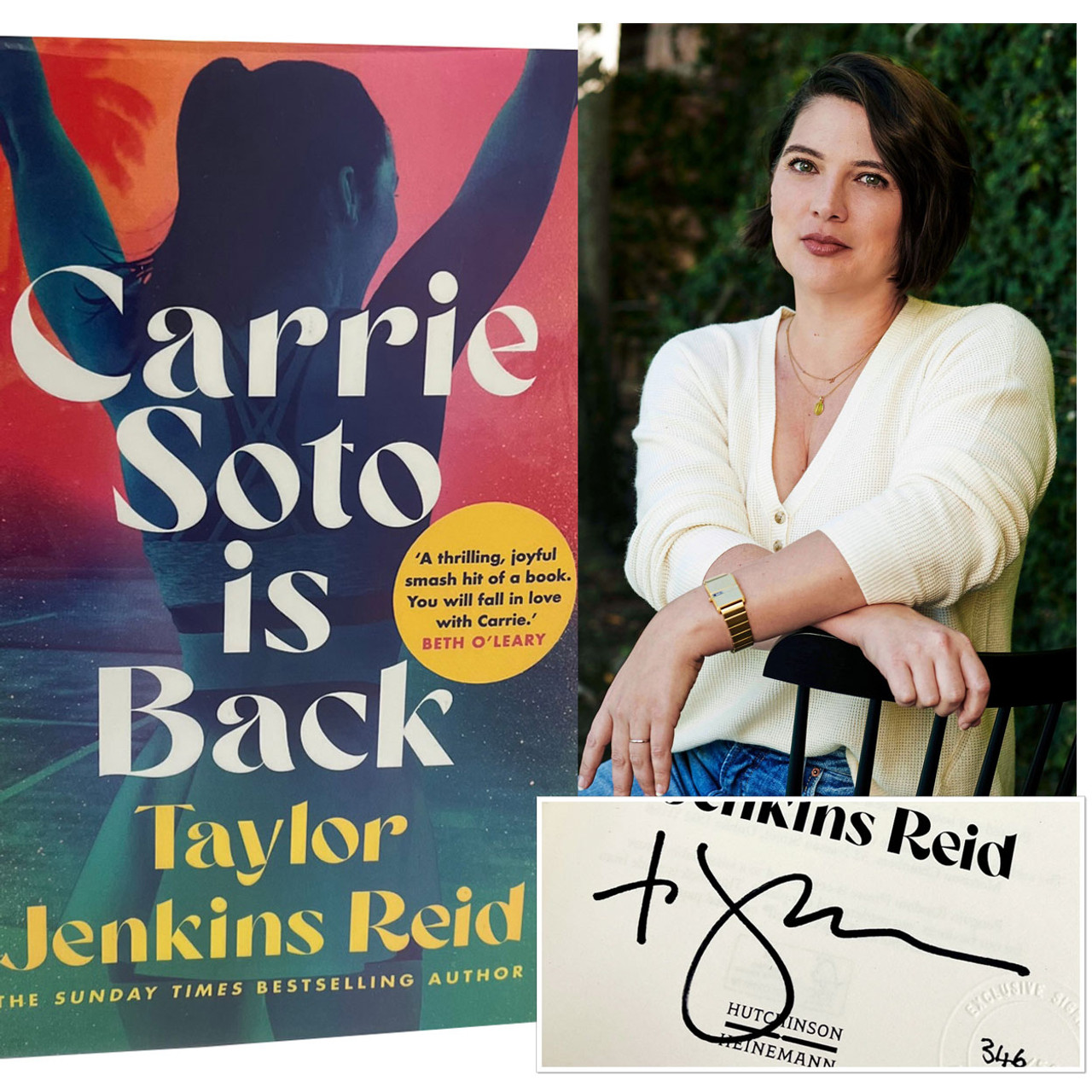 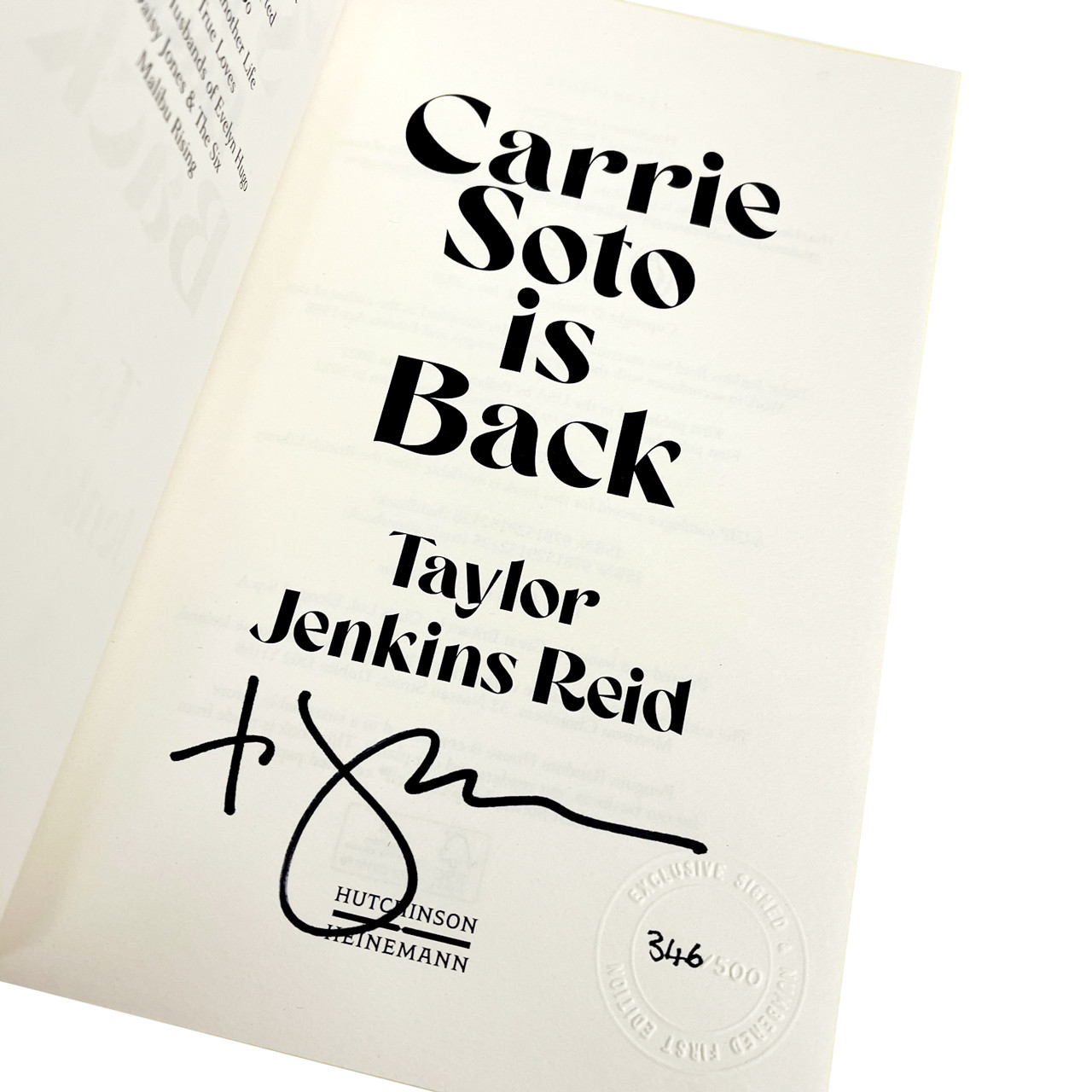 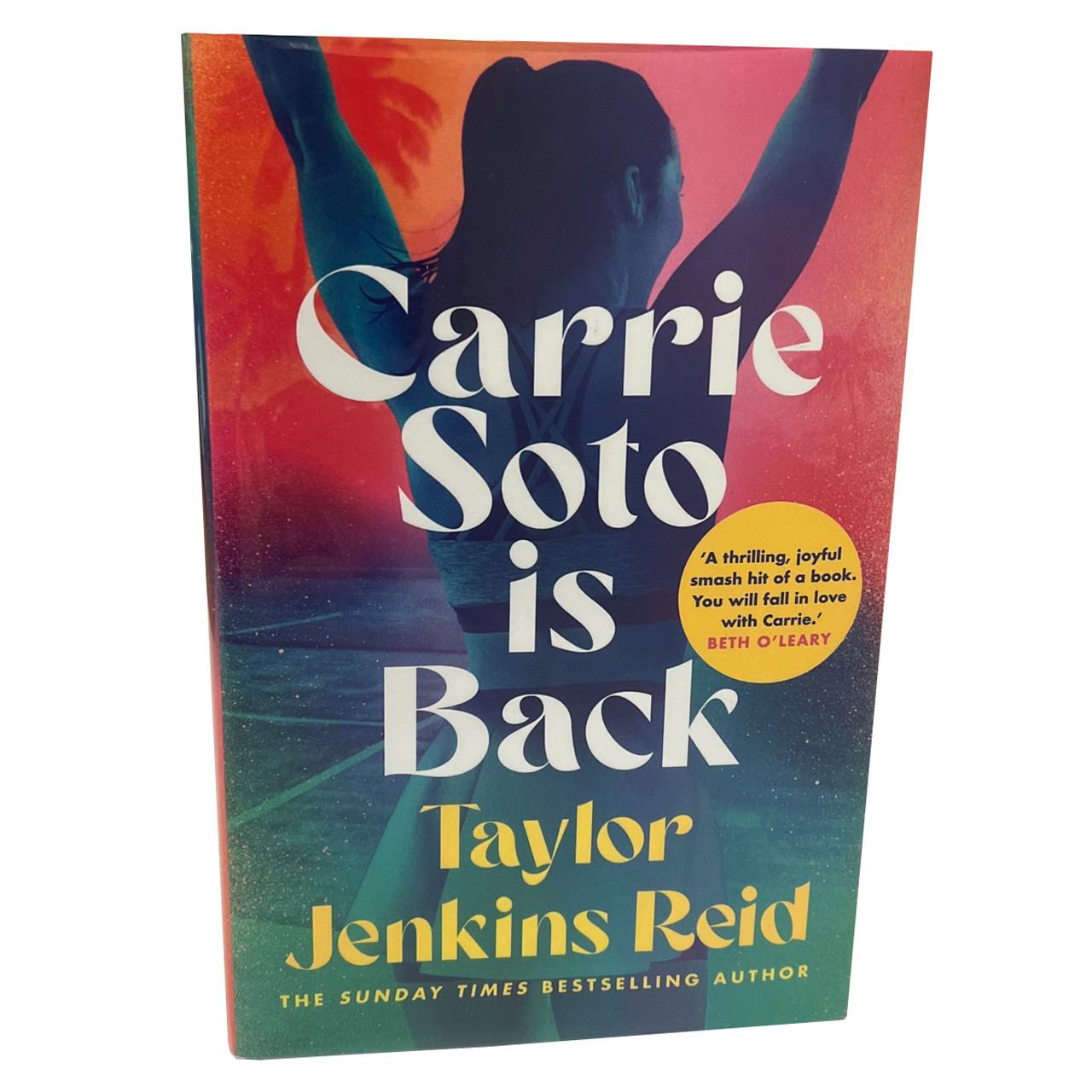 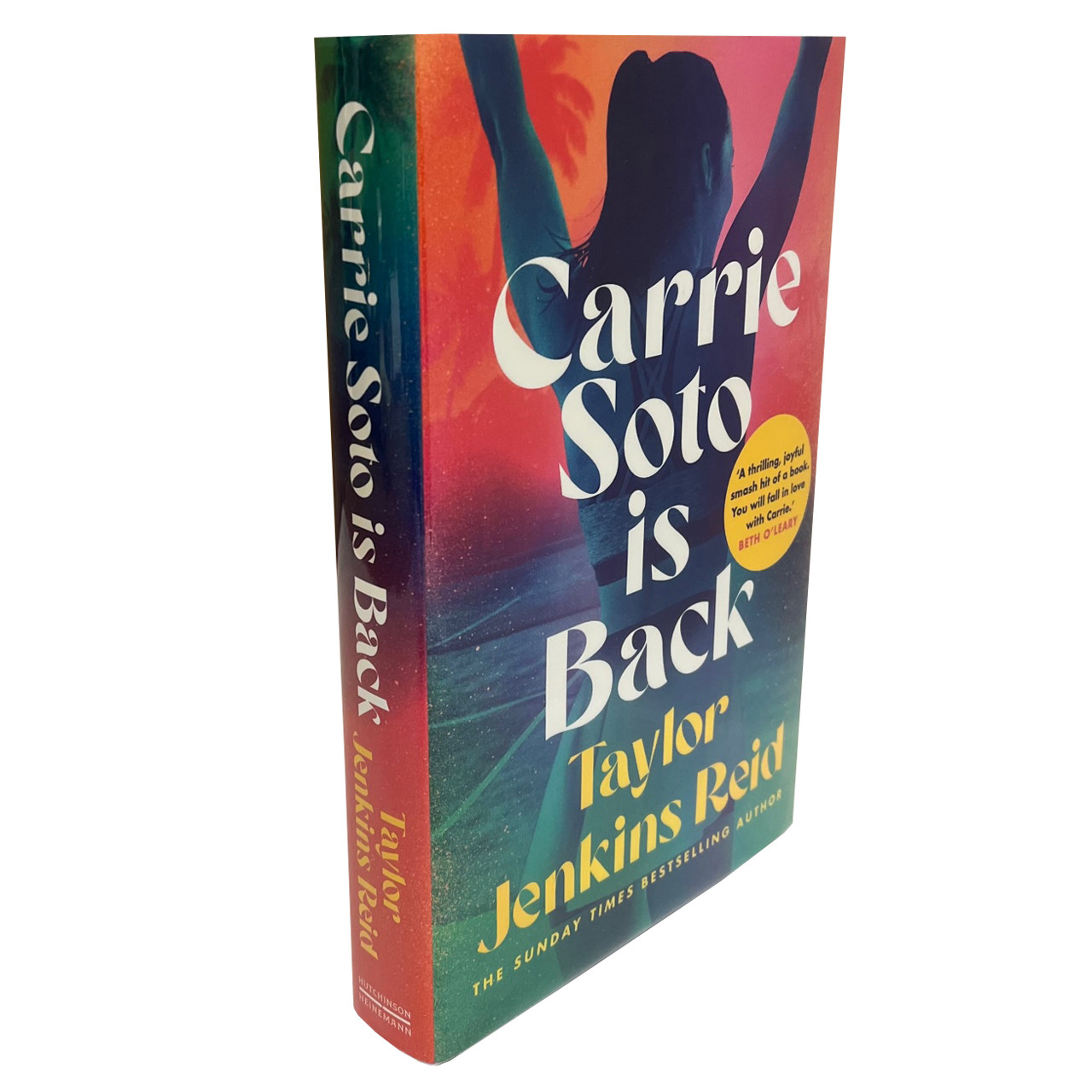 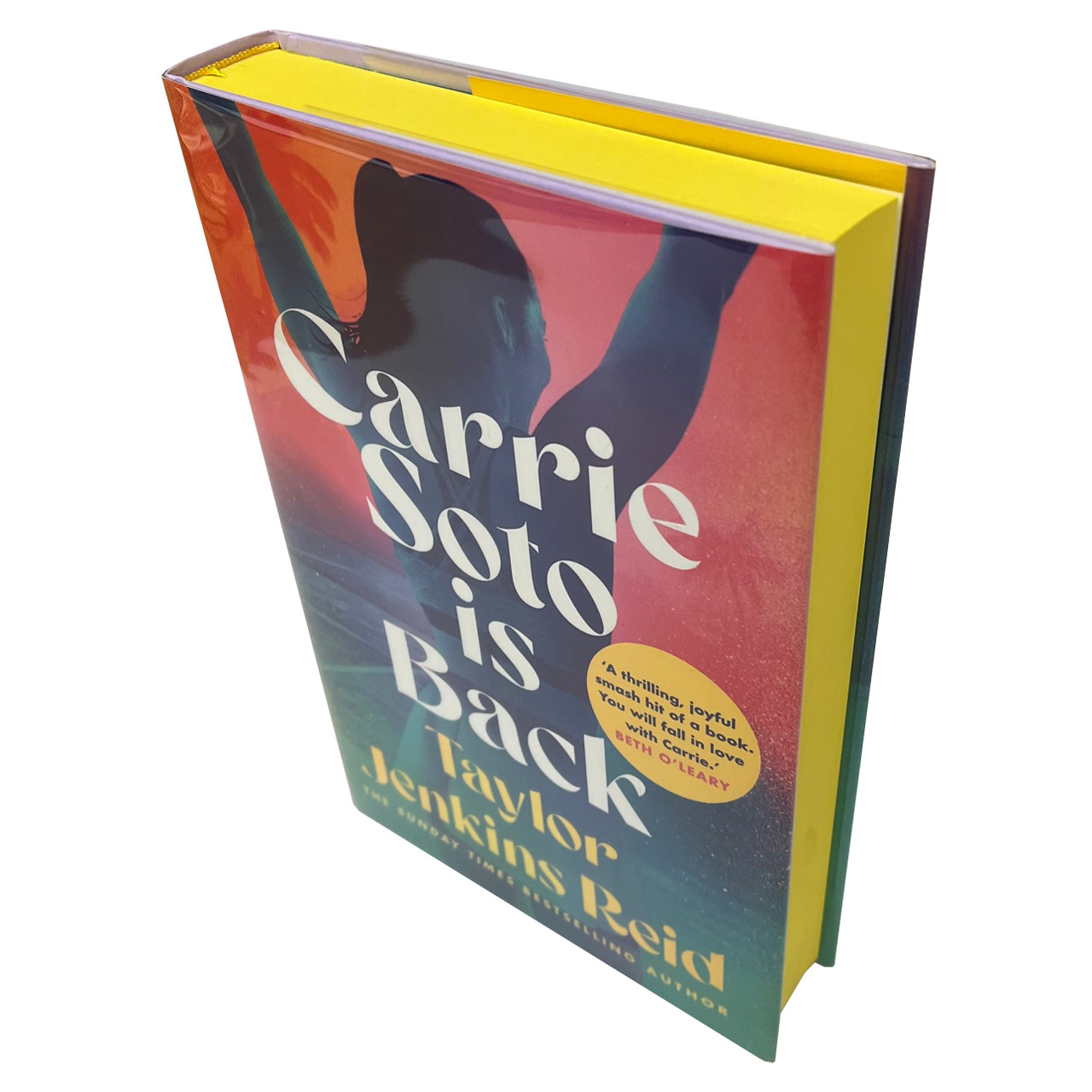 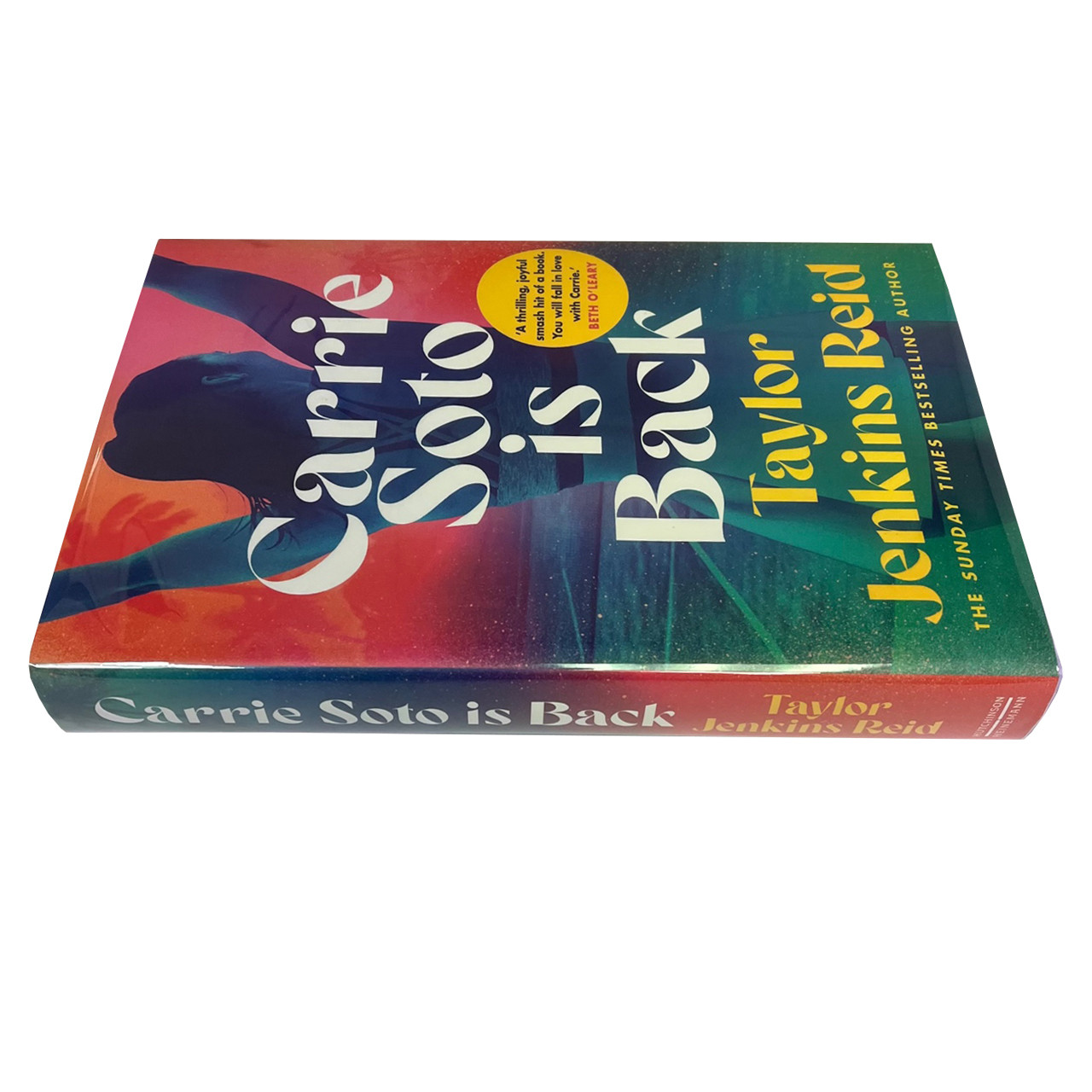 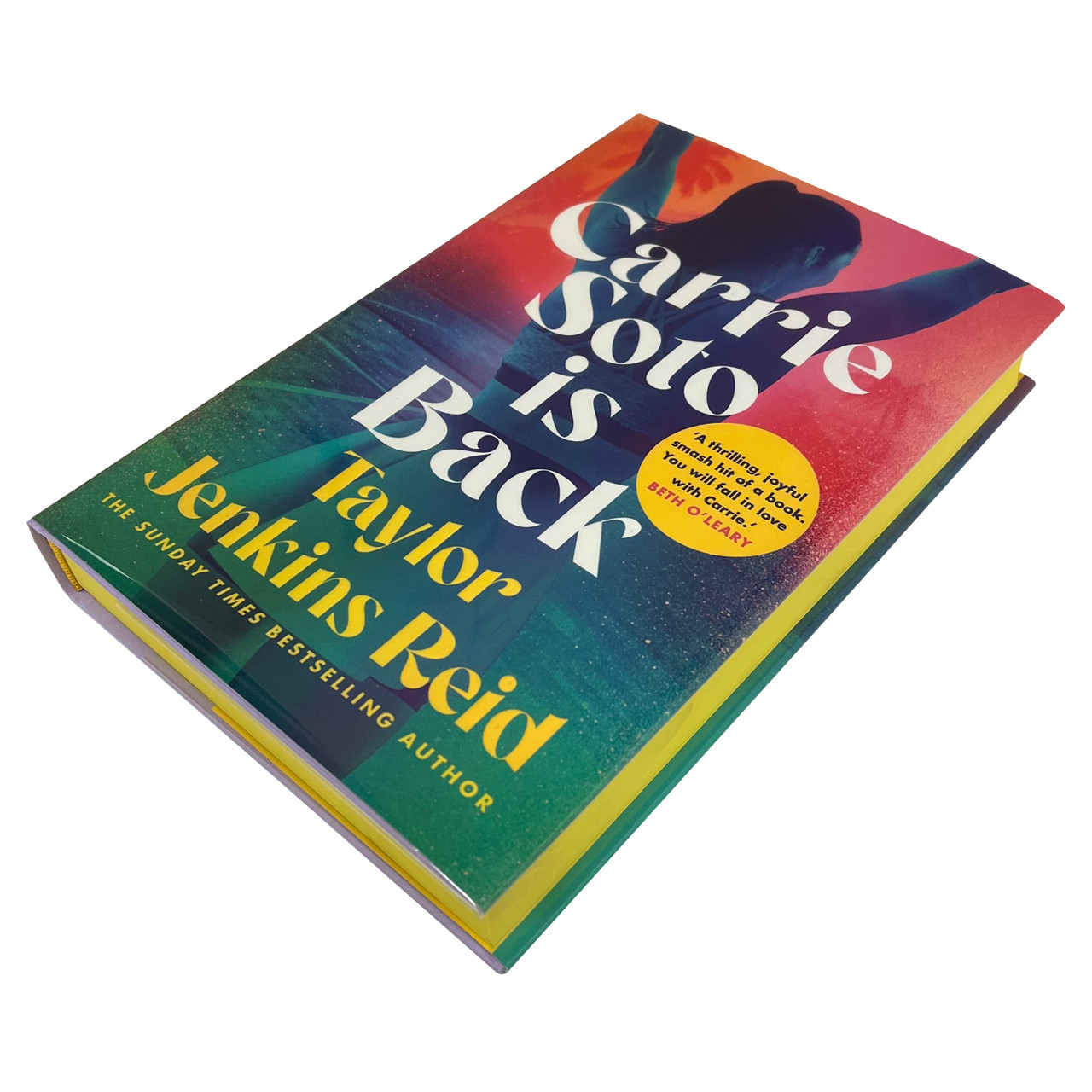 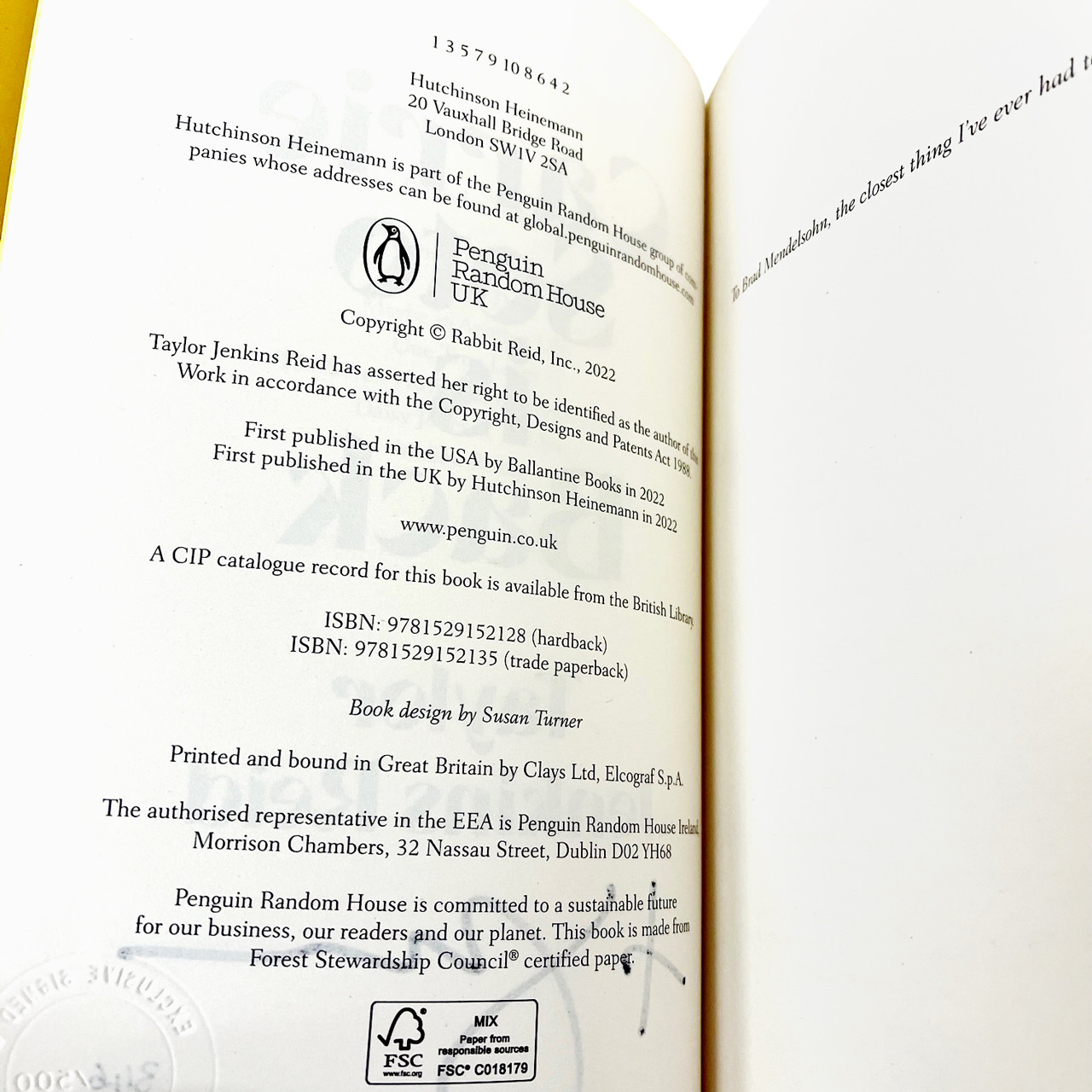 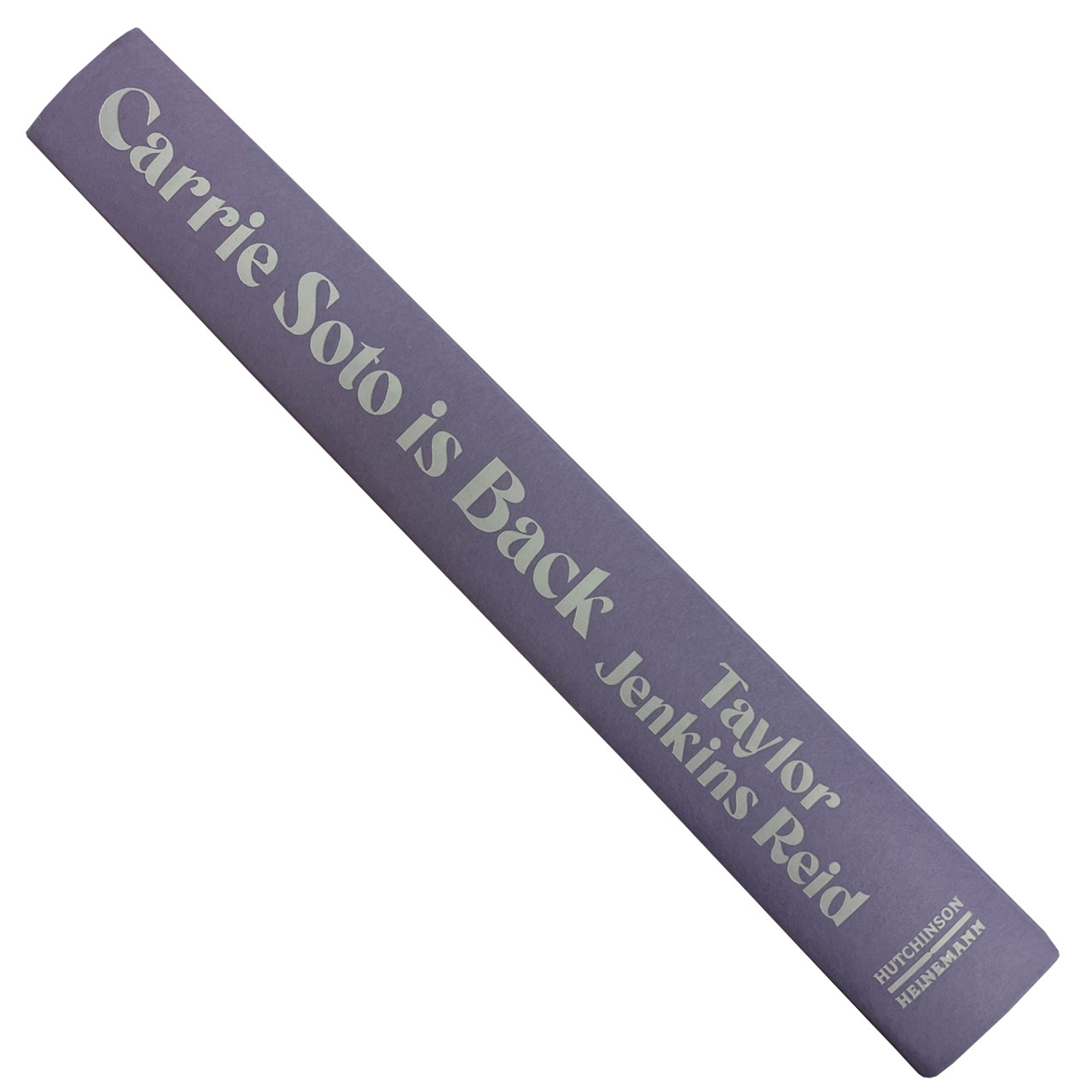 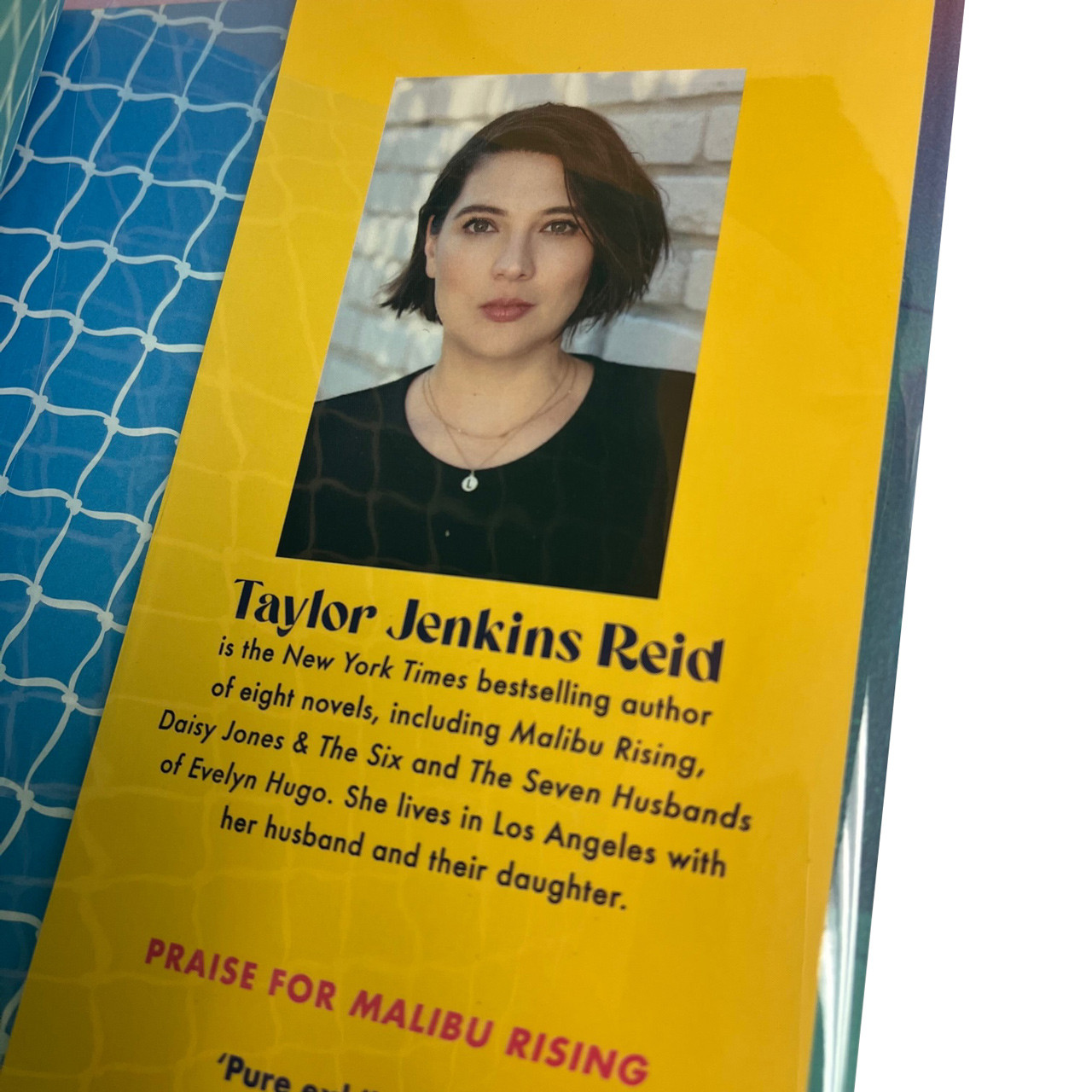 “A heart-filled novel about an iconic and persevering father and daughter.”—Time

Personally signed by Taylor Jenkins Reid and Limited To only 500.

Hutchinson Heinemann. August 30, 2022. Taylor Jenkins Reid "Carrie Soto Is Back". Goldsboro Books. Signed Limited Edition of 500.  Be one of the first collectors in the world to own this special slipcased and sealed version of the Signed Limited Edition. Fewer than 20 of these slipcased and sealed copies will be produced. Full number line on the copyright page. UK First Edition, First Printing. Sealed.

#1 NEW YORK TIMES BESTSELLER • “An epic adventure about a female athlete perhaps past her prime, brought back to the tennis court for one last grand slam” (Elle), from the author of Malibu Rising, Daisy Jones & The Six, and The Seven Husbands of Evelyn Hugo"

“Gorgeous. The kind of sharp, smart, potent book you have to set aside every few pages just to catch your breath. I’ll take a piece of Carrie Soto forward with me in life and be a little better for it.”—Emily Henry, author of Book Lovers and Beach Read 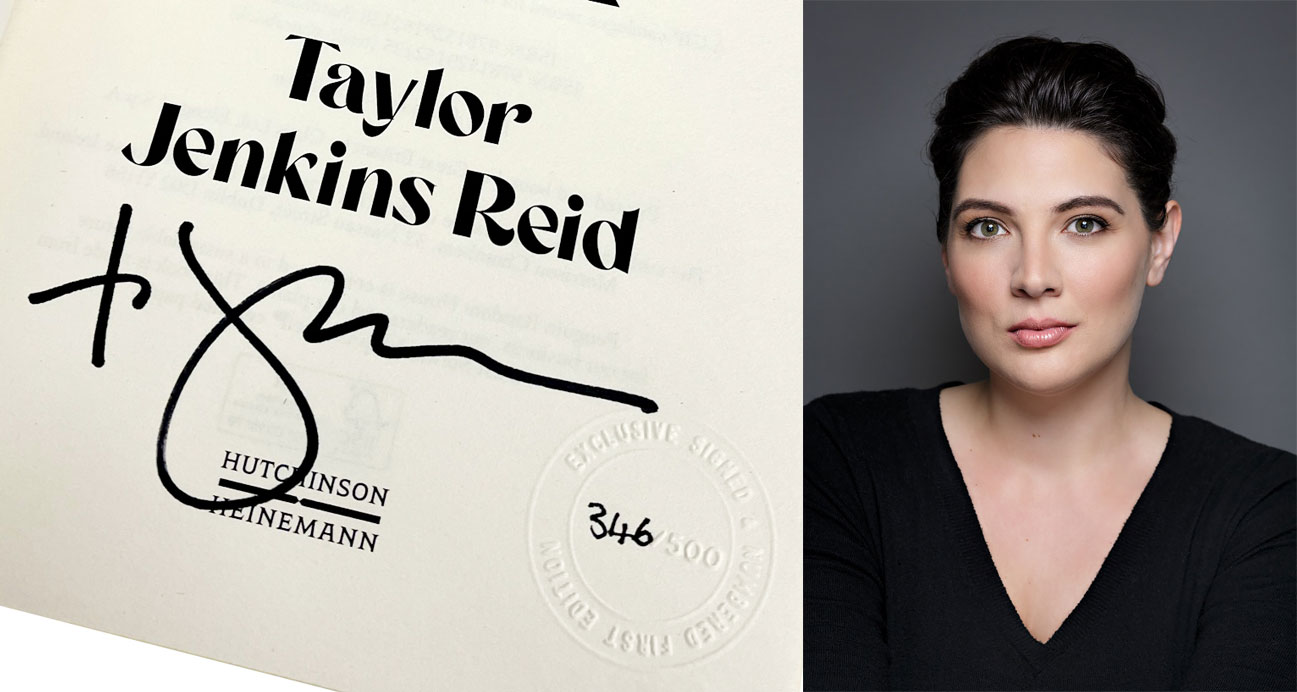 Taylor Jenkins Reid is the author of The Seven Husbands of Evelyn Hugo, One True Loves, Maybe in Another Life, After I Do, and Forever, Interrupted. Her novels have been Indie Next Picks, chosen by Book of the Month, and featured in People, US Weekly, Entertainment Weekly, Good Morning America, and more. Her newest novel, Daisy Jones and the Six, will be out March 5th. She lives in Los Angeles.

In this powerful novel about the cost of greatness, a legendary athlete attempts a comeback when the world considers her past her prime—from the New York Times bestselling author of Malibu Rising.

Carrie Soto is fierce, and her determination to win at any cost has not made her popular. But by the time she retires from tennis, she is the best player the world has ever seen. She has shattered every record and claimed twenty Grand Slam titles. And if you ask Carrie, she is entitled to every one. She sacrificed nearly everything to become the best, with her father, Javier, as her coach. A former champion himself, Javier has trained her since the age of two.

But six years after her retirement, Carrie finds herself sitting in the stands of the 1994 US Open, watching her record be taken from her by a brutal, stunning player named Nicki Chan.

At thirty-seven years old, Carrie makes the monumental decision to come out of retirement and be coached by her father for one last year in an attempt to reclaim her record. Even if the sports media says that they never liked “the Battle-Axe” anyway. Even if her body doesn’t move as fast as it did. And even if it means swallowing her pride to train with a man she once almost opened her heart to: Bowe Huntley. Like her, he has something to prove before he gives up the game forever.

In spite of it all, Carrie Soto is back, for one epic final season. In this riveting and unforgettable novel, Taylor Jenkins Reid tells her most vulnerable, emotional story yet.

Lifetime Guarantee of Signature Authenticity. Personally signed by Taylor Jenkins Reid directly onto the limitation page of the book. The autograph is not a facsimile, stamp, or auto-pen.

“The books in Reid’s famous women quartet stand alone. . . . But each of the books centers a vibrant protagonist managing the tensions between her glamorous life in the public eye and the pressures she feels in private . . . with Reid meticulously collecting minute yet meaningful details to help build immersive worlds”—Time

“Carrie Soto [Is Back] . . . is like other sports novels in which underdogs punch, volley, bat and birdie their way to victory or additional defeat, but it goes beyond this to explore sexism and racism in the tennis world in the 1990s. . . . This novel will grab you. You’ll tear through blow-by-blow descriptions of championship matches on some of the most famous tennis courts in the world. . . .”—The Washington Post

“An epic story about bravery, endurance, but also the power of vulnerability.”—BuzzFeed

“Reid . . . draws on the lives of actual tennis pros (think Serena, Sharapova) to build a world of believable rivalries and intrigue infused with the whiplash suspense of a nail-biting tennis match.”—People (Book of the Week)

“Nearly every Taylor Jenkins Reid novel reads like a survey course in some flagrantly glamorous specialty and era. . . . Come for the King Richard–level attention to the art of the game; stay for the more personal soap operas unfolding off the court, and the final score.”—Entertainment Weekly

“Taylor Jenkins Reid’s latest is set in the world of the tennis elite, following a ruthless former champion who—after losing her record to a rising star—decides to come out of retirement at 37 in order to reclaim her title. It’s seriously inspiring.”—Cosmopolitan

“Reid writes about the game with suspense, transforming a tennis match into a page-turner even for readers who don’t care about sports. . . . A compulsively readable look at female ambition.”—Kirkus Reviews (starred review)

“Reid has written another knockout of a book.”—Library Journal (starred review)

“Reid captures the excitement of elite sports in her descriptions of Carrie’s games, as well as the struggle that women athletes face when their ambition and confidence is ‘too much.’ It’s another triumph for bestselling author Reid, and her growing number of fans . . . ”—Booklist (starred review)

“Another ace by Taylor Jenkins Reid, straight to the baseline! . . . An immersive delight.”—Emma Straub

VERY FINE GUARANTEED. As New (Sealed). The condition is of the highest quality without any discernible flaws. The dust-jacket is now protected in a brand new archival acid-free Brodart sleeve.

Publisher:
Hutchinson Heinemann
Edition:
Signed Limited Edition of 500
Binding:
Hardcover in dust-jacket with slipcase
Signature Authenticity:
Lifetime Guarantee of Signature Authenticity. Personally signed by Taylor Jenkins Reid directly onto the limitation page of the book. The autograph is not a facsimile, stamp, or auto-pen.
Author:
Taylor Jenkins Reid
Title:
Carrie Soto Is Back