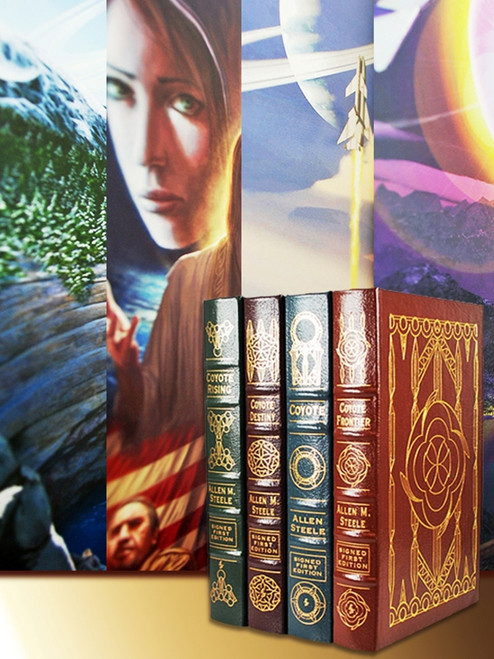 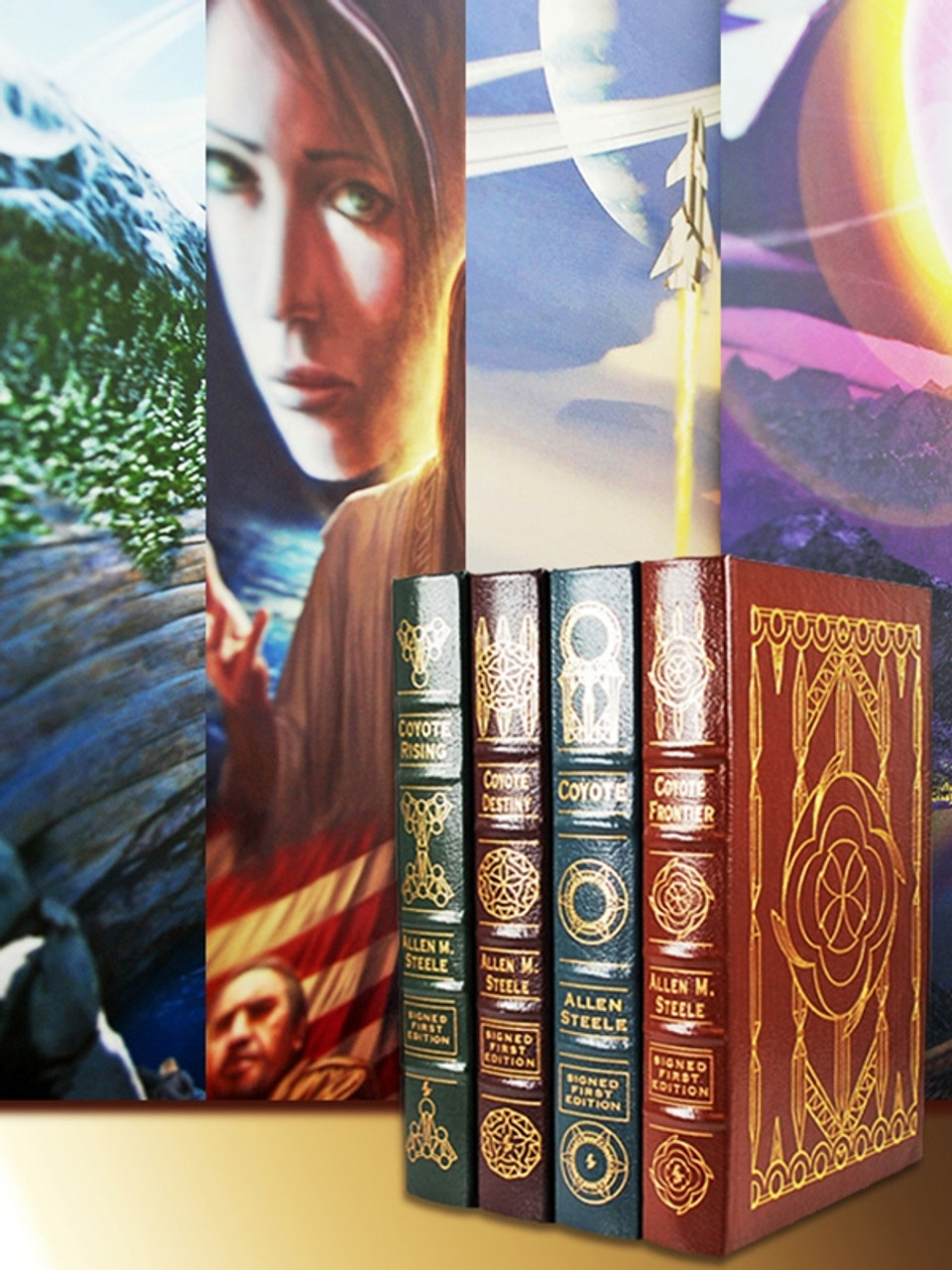 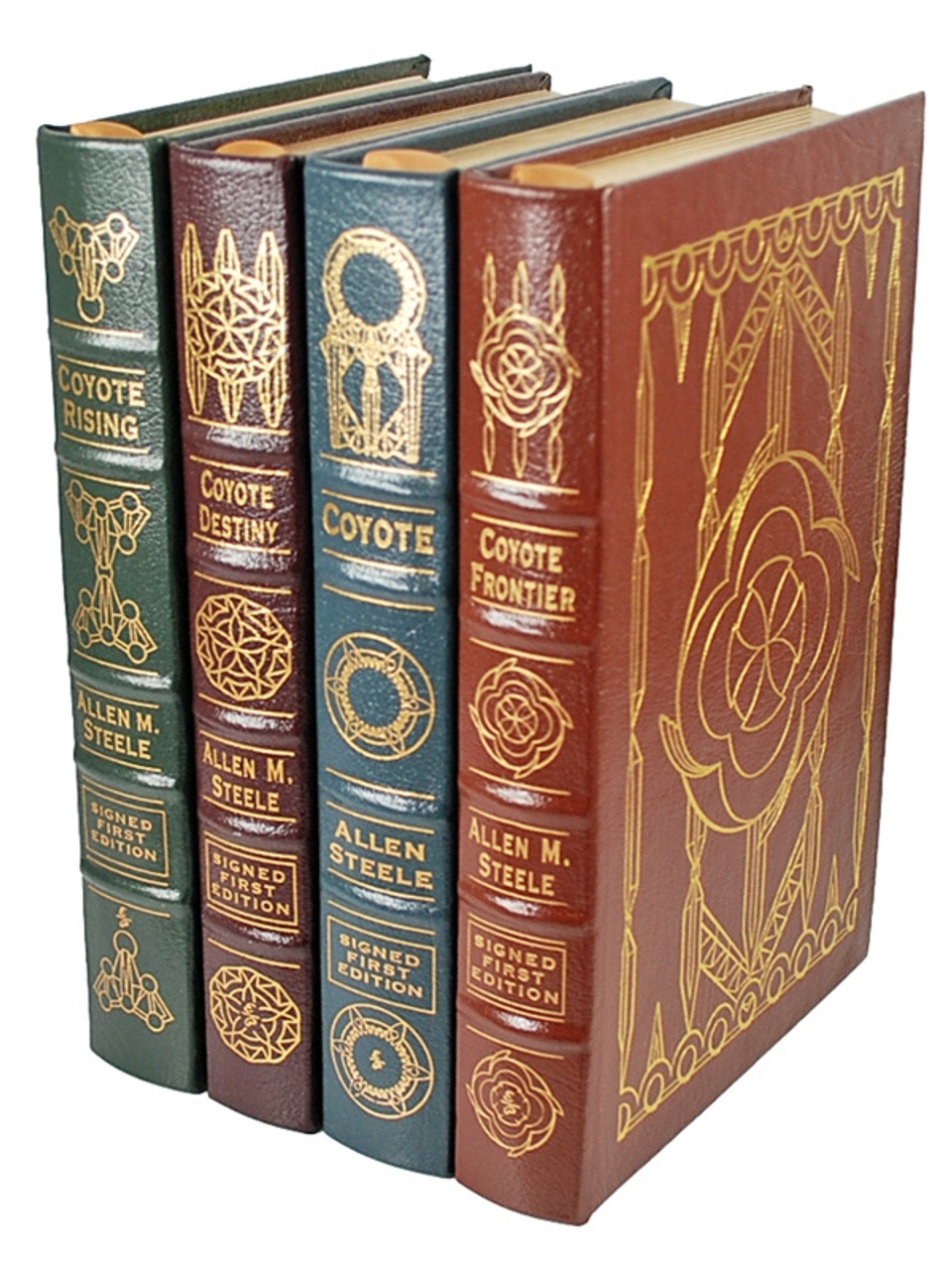 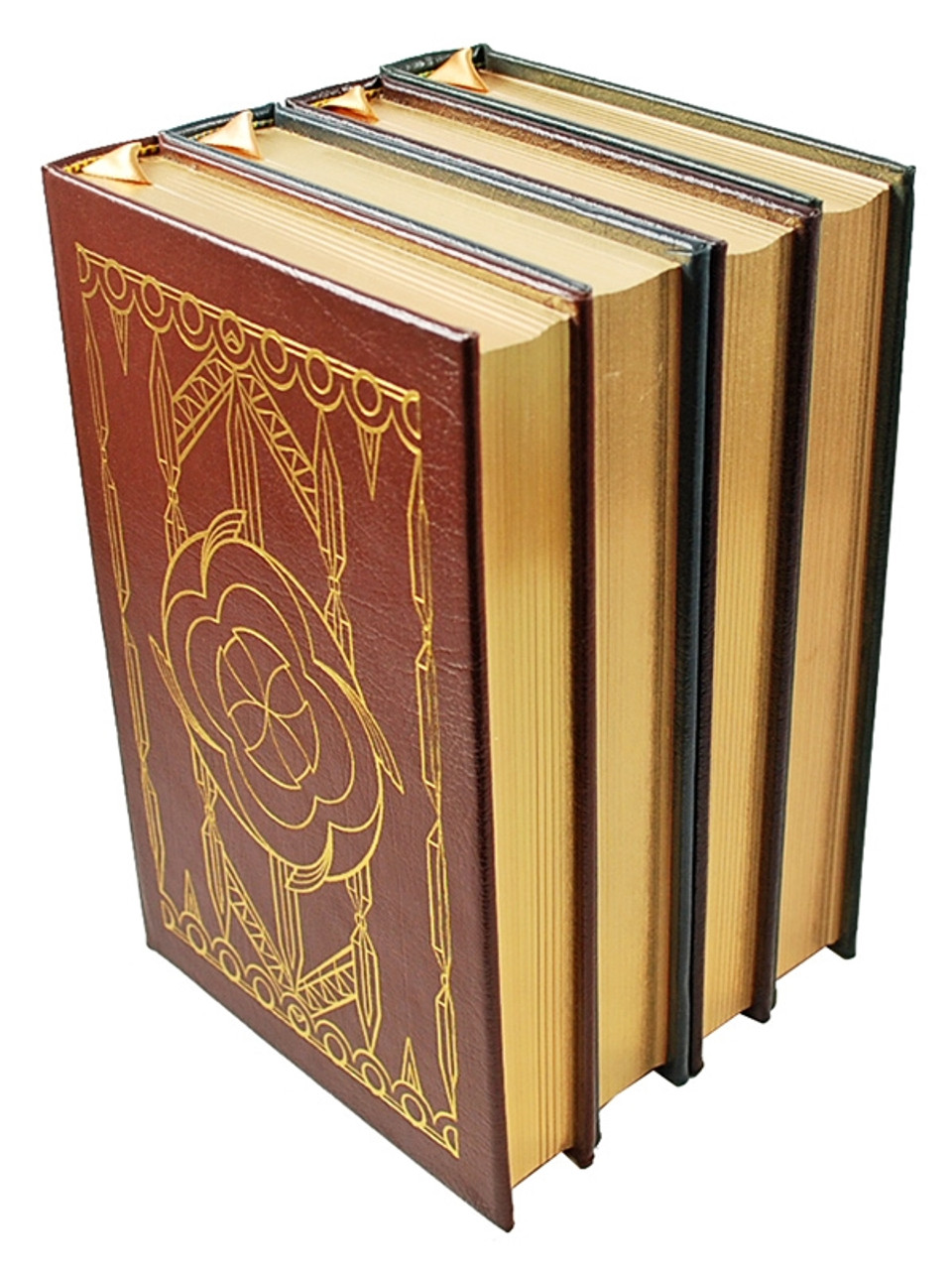 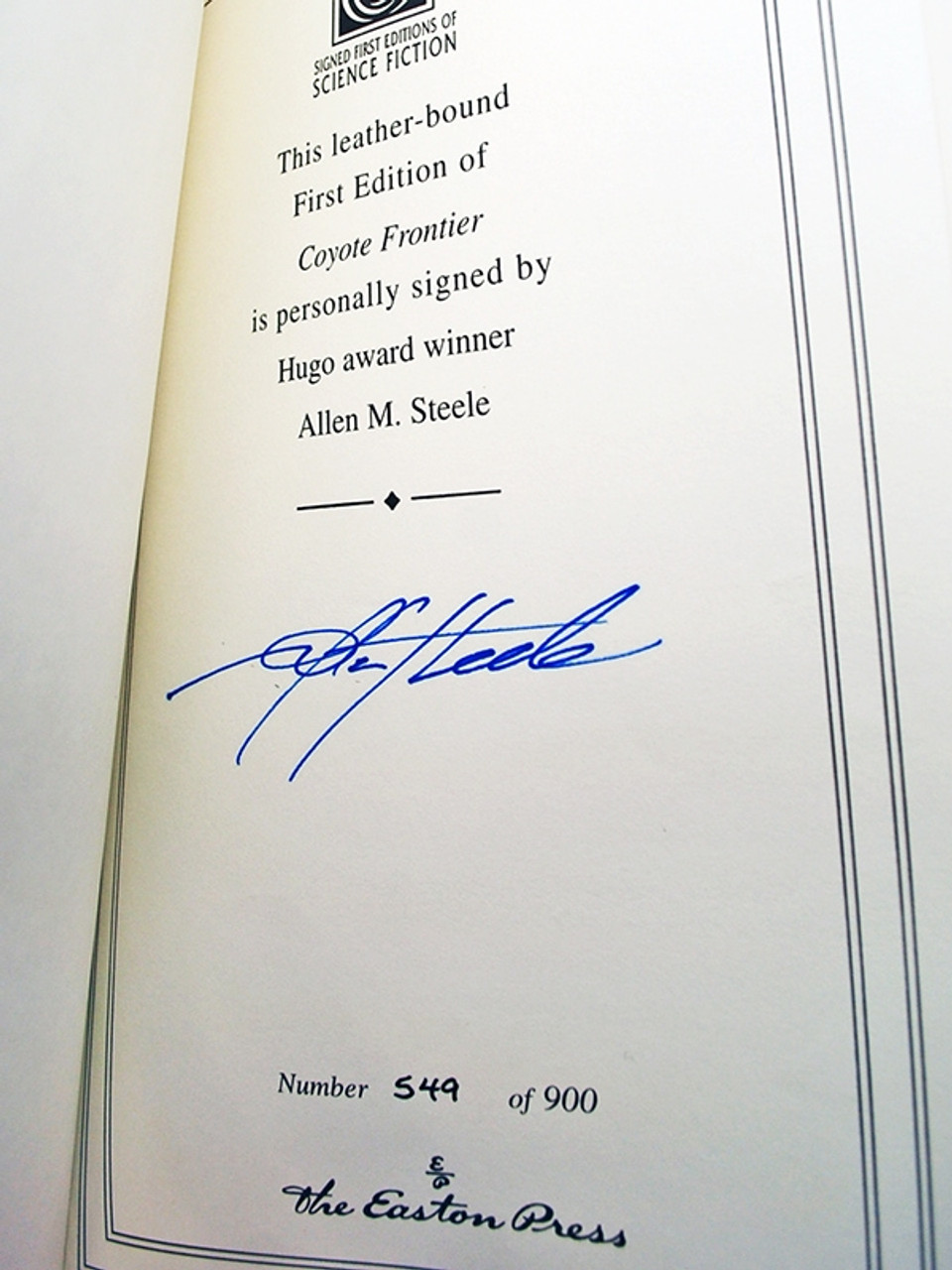 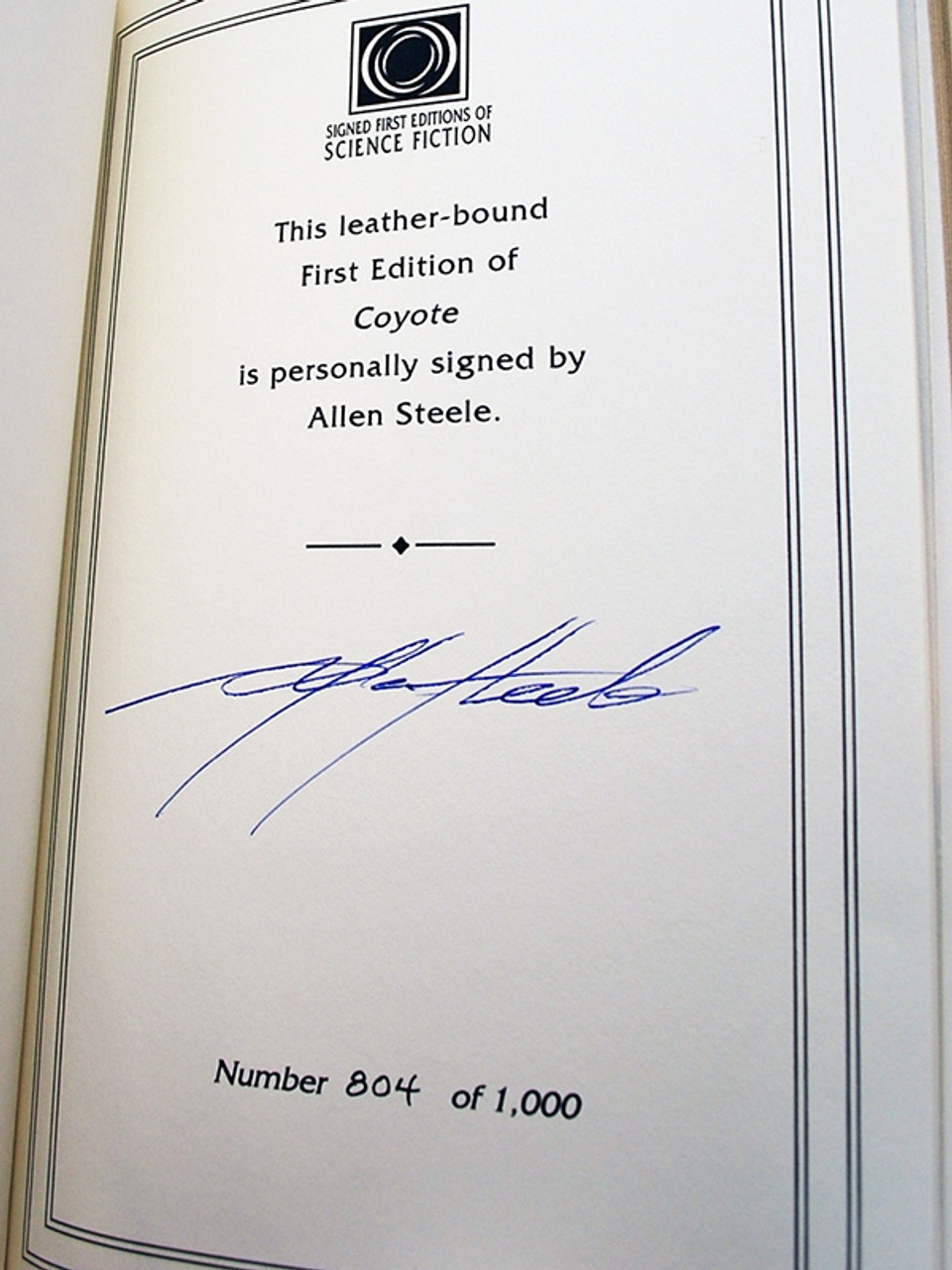 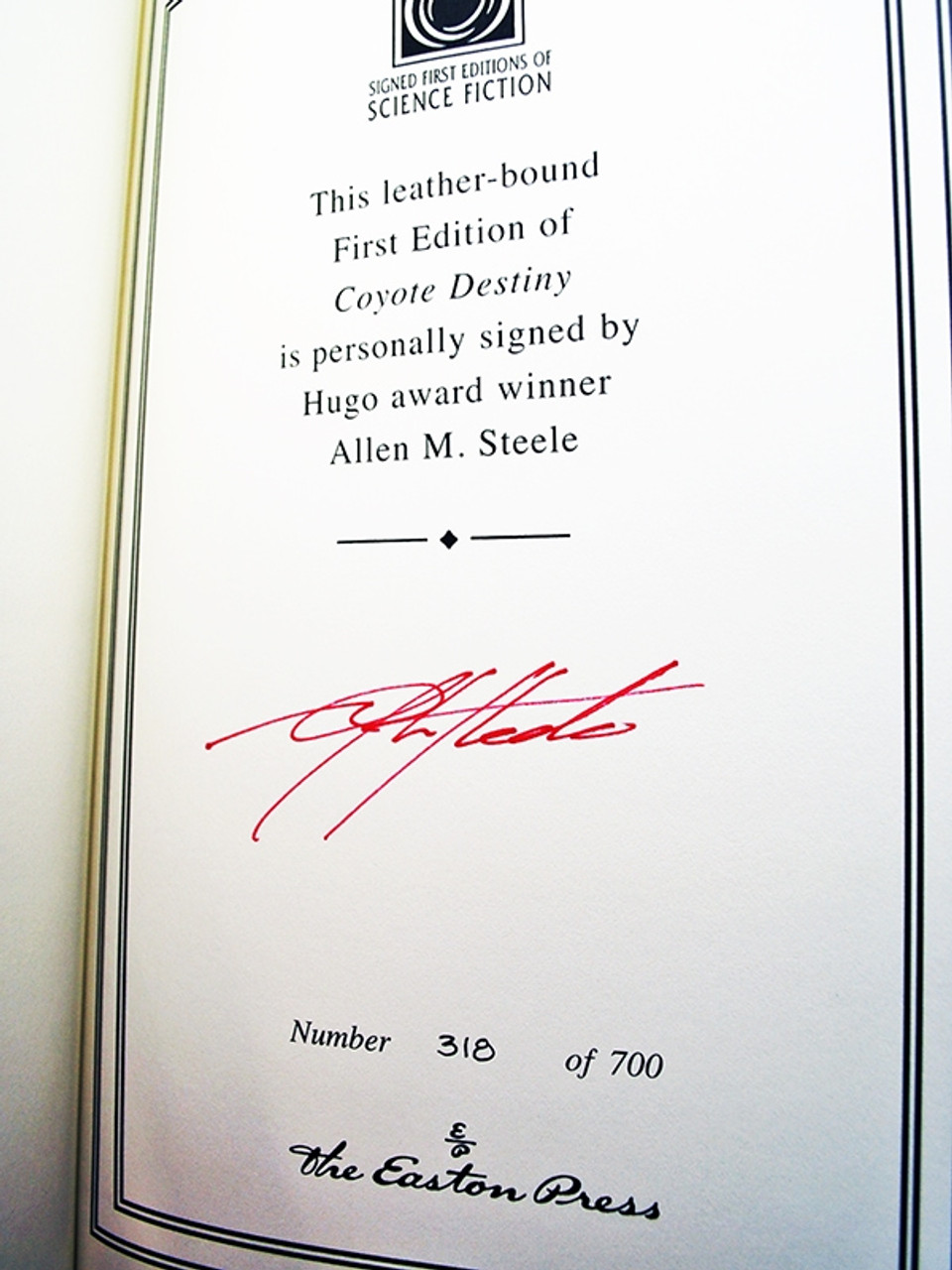 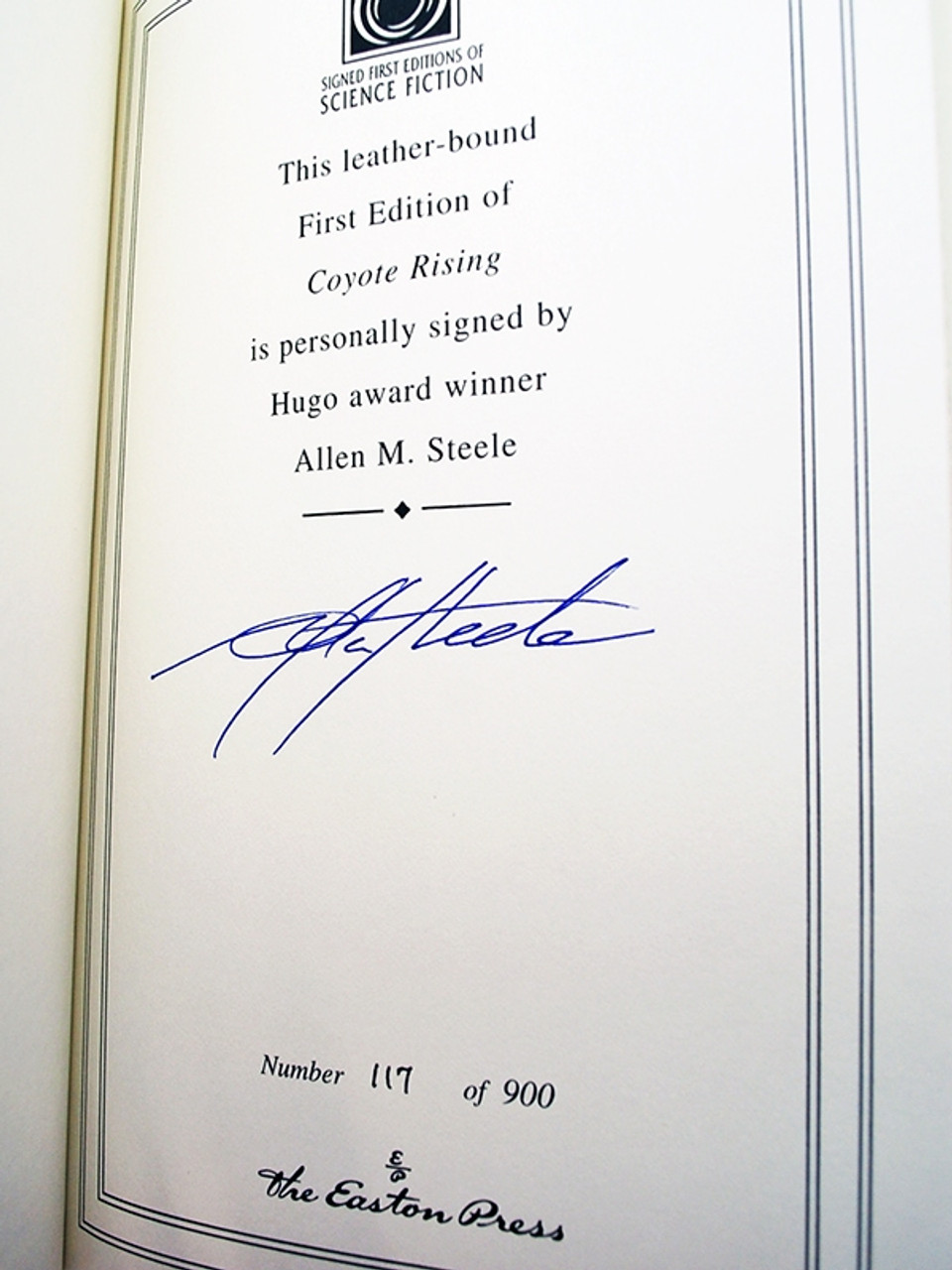 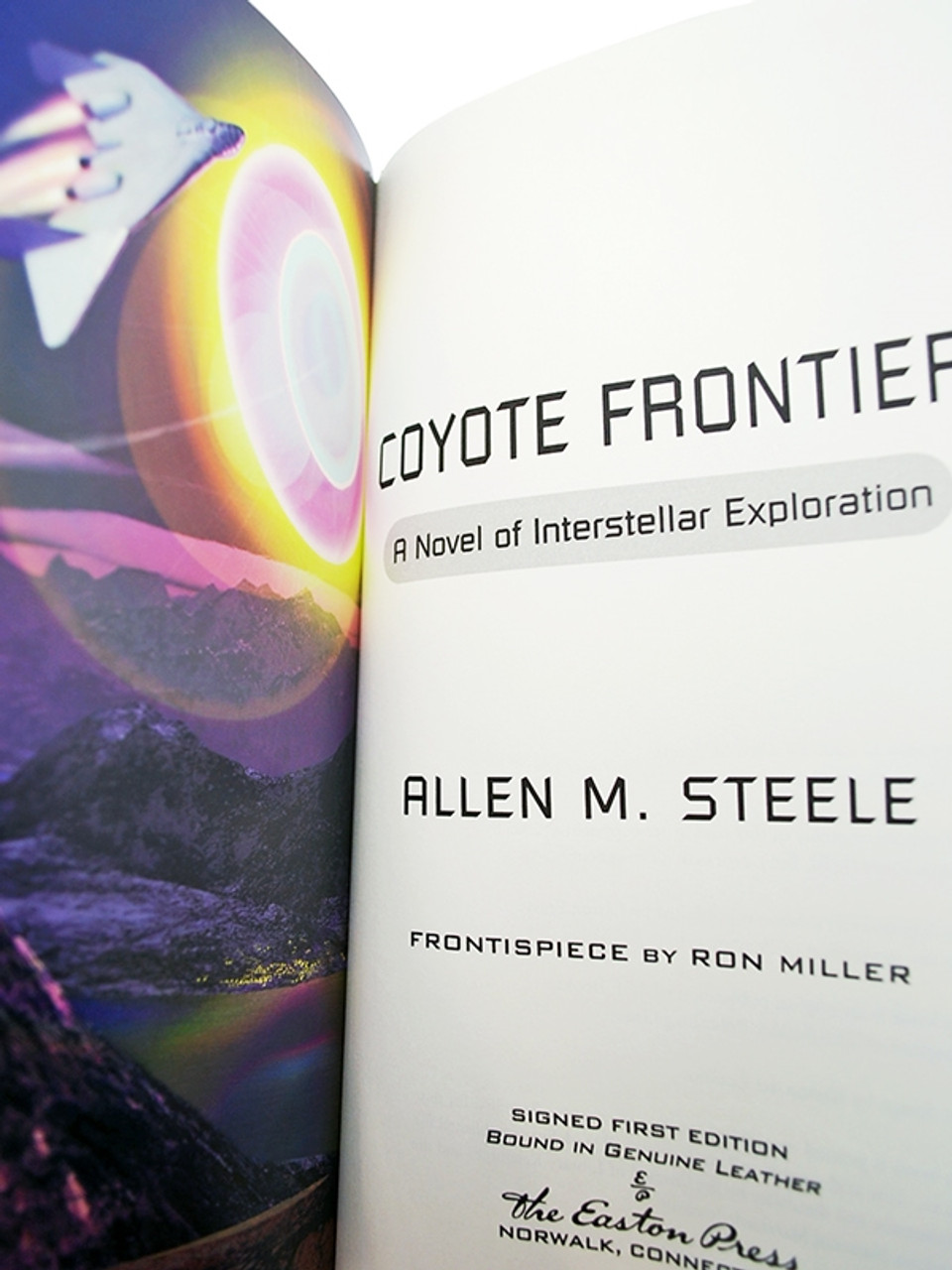 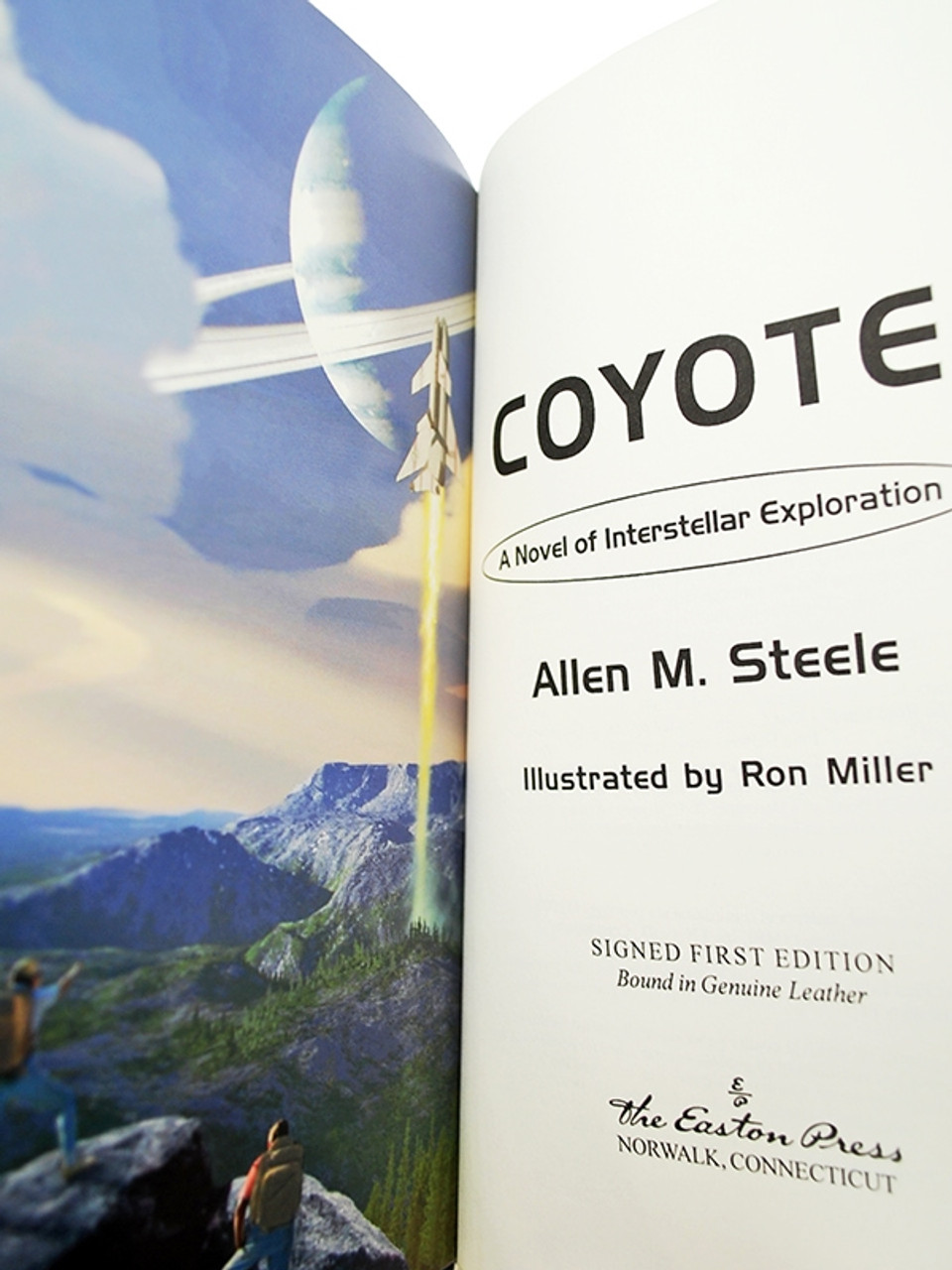 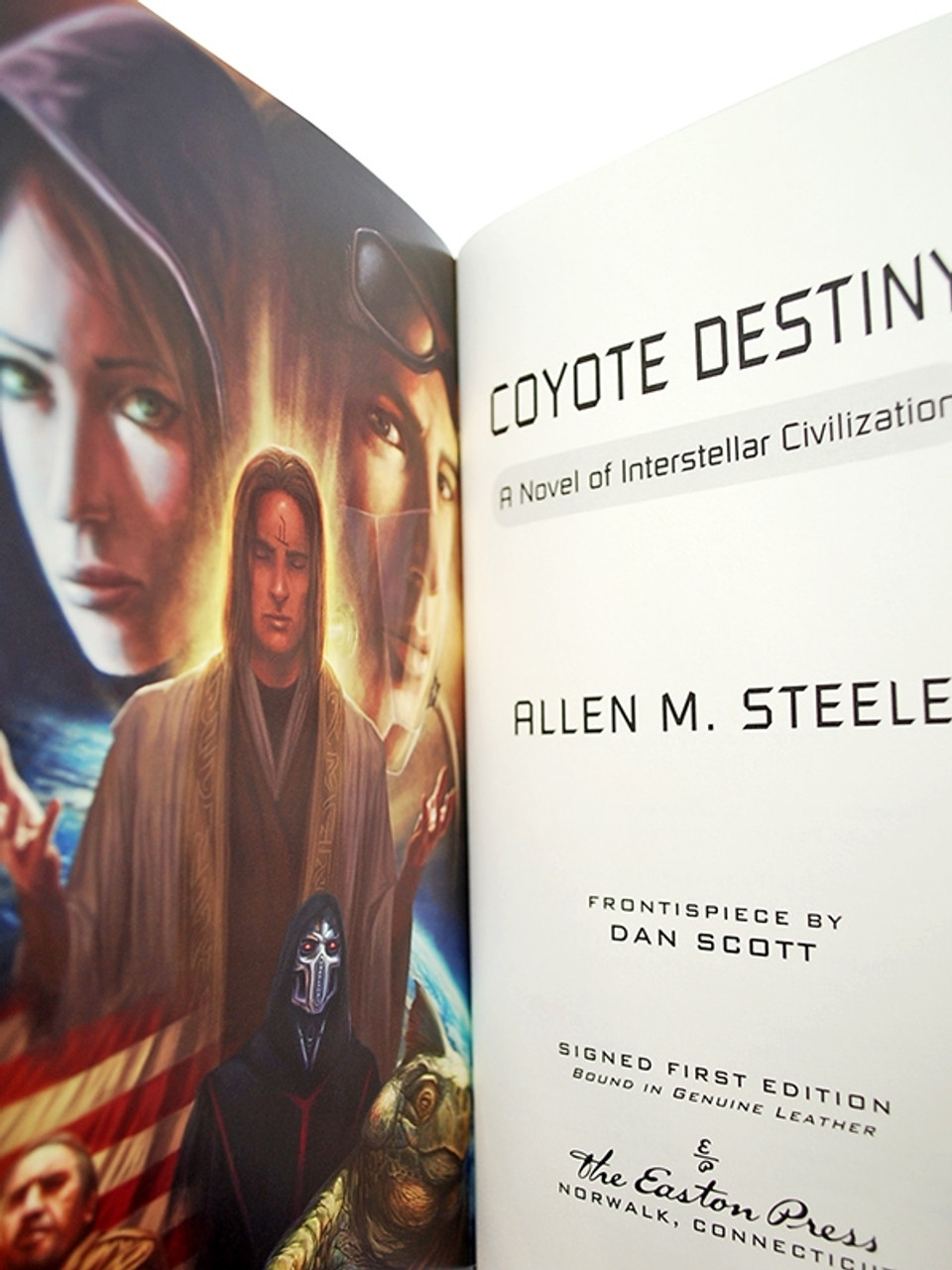 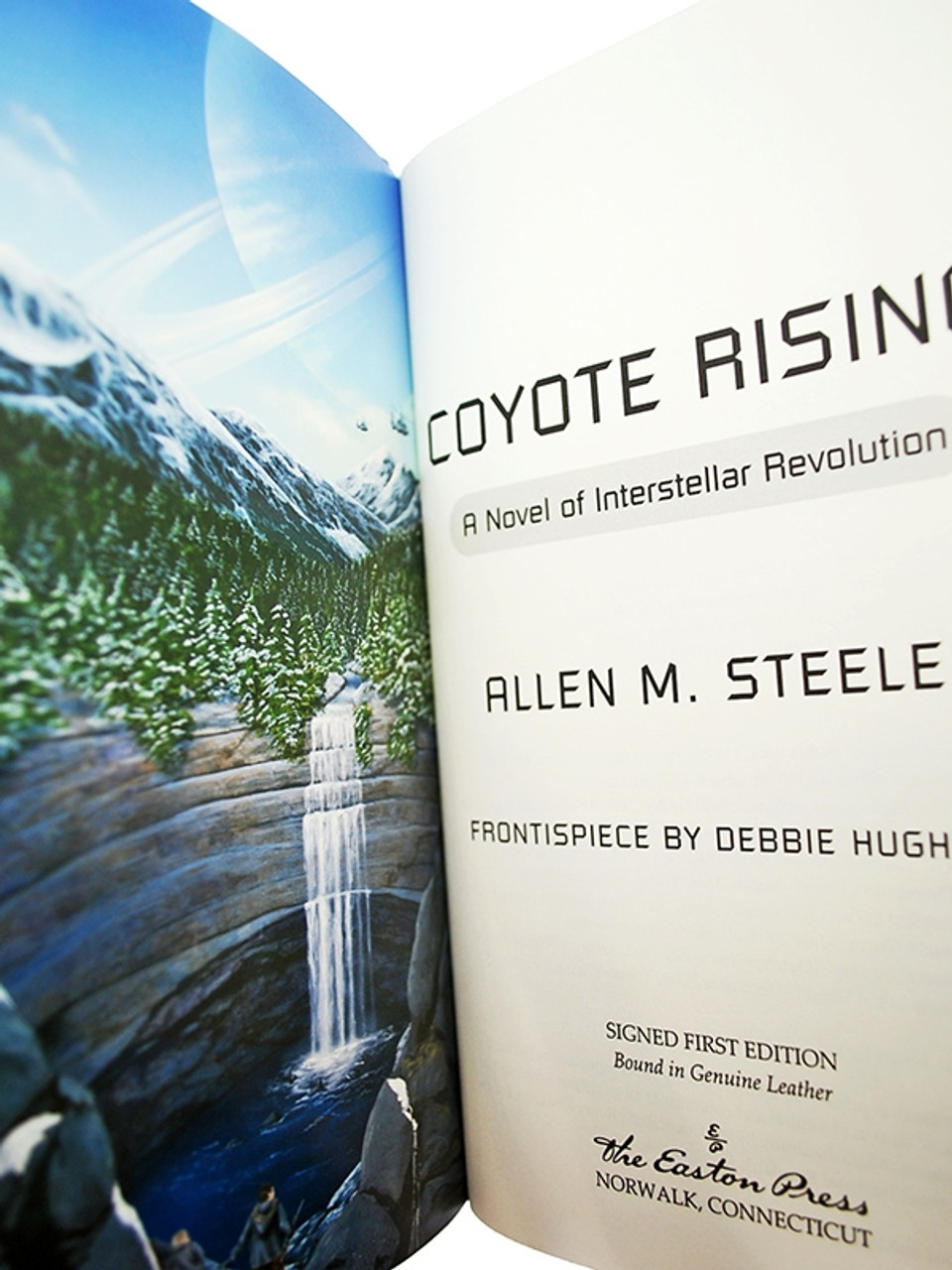 
Easton Press. Norwalk, CT. Allen M. Steele. The Coyote Trilogy Books. Signed First Edition. Each edition has been personally signed by the author Allen M. Steele directly onto the limitation page. Each volume is a luxurious leather bound masterpiece from the Signed First Edition of Science Fiction collection. Beautifully illustrated and bound in full genuine leather. Includes the original Certificates of Authenticity (COA), each one signed and dated by the author along with a witness.

Allen Steele is a science fiction writer with sixteen novels and five collections of short fiction to his credit. His works have received the Hugo, Locus, Seiun, and Science Fiction Weekly awards, and have been nominated for the Nebula, Sturgeon, and Side-wise Awards.


About
"The best space colonization saga to come along in decades" (Rocky Mountain News) continues.

The unexpected arrival of a ship from Earth after their long isolation from their home world leaves the inhabitants of Coyote both hopeful and wary. The lone passenger brings news-both good and bad.

The good news is that there was a survivor of the long-ago explosion of the Robert E. Lee and he is living still on Earth, in the ruined city called Boston. The bad news is that the person responsible for that act of terrorism is also still alive-and somewhere on Coyote...

About the author
His first published story, "Live from the Mars Hotel," was published in 1988, and his first novel, Orbital Decay, was published in 1989. His best-known work is the Coyote series -- Coyote, Coyote Rising, Coyote Frontier, Coyote Horizon, and Coyote Destiny -- and the associative novels set in the same universe: Spindrift, Galaxy Blues, and the forthcoming Hex. A graduate of New England College and the University of Missouri, he is a former journalist, and once spent a brief tenure as a Washington correspondent. He was born and raised in Nashville, Tennessee, and now lives in western Massachusetts with his wife and dogs.


Coyote (2002) is science fiction author Allen Steele’s novel of interstellar exploration and settlement. The book is a compilation of some of Steele’s short stories into one epic novel. Perspective is taken from many of the major characters of the book, giving Coyote a well-rounded and satisfying account of the colonization of a new world.
Coyote is part of a trilogy, that was followed by Coyote Rising and Coyote Frontier. There are three spinoff novels, Spindrift, Galaxy Blues, and Hex which are set in the same universe, although not directly tied to the events in Coyote. The series is continued by the Coyote Chronicles, a two book duology, including Coyote Horizon, released in March 2009 and Coyote Destiny, which was released on March 2, 2010.
Coyote Frontier

Steele's trilogy about human settlers on an alien planet facing practical and moral challenges comes to a fitting close. The Coyote Federation is a healthy democracy now, but its citizens still depend on the products of Earth's technology. Earth, meanwhile, is sliding into ecological disaster and craves raw materials and room for emigrants. The two sides need each other, but it's unclear whether people have learned enough—or can control themselves well enough—to avoid making selfish little decisions like the ones that devastated humanity's birthplace. Shifting deftly among several characters, Hugo-winner Steele respects the various viewpoints keeping the debate fluid, but he also makes plausible that opposing individuals could grudgingly learn to respect each other enough to modify their rigid plans. As in the first two books in this popular SF series, Coyote and Coyote Rising, another major actor is the mysterious planet itself, which invites people to find new ways to think. (Dec.)

Hugo-winner Steele's stirring second entry in the interstellar frontier saga that began with Coyote (2002) dramatizes the growing tensions between groups of pioneers on Coyote, a recently discovered world in the 47 Ursae Majoris system. Coyote's first settlers fled tyranny on Earth, so they're disconcerted by the arrival of starships full of colonists sent by a different dictatorship. Unavoidable conflict between the people who want to be left alone and those who need to dominate leads to intrigue, raids and eventually full-scale revolt. Perhaps inevitably (since it was first published as a series of stories in Asimov's), the novel deals with scattered episodes from that struggle, so that characters appear, perform some necessary action, and vanish just as readers have gotten interested in them. However, Steele presents his characters convincingly enough to account for their selfless or calculating behavior, and it makes sense for the story to focus on larger social evolution rather than individuals. In any event, the book's real center is its setting. Coyote offers forests, mountains, prairies, rivers in a panorama strange enough to rouse awe, vast enough to give all manner of humans room to find themselves. Happily, by the end the little war is finished, but this big, wonderful world is still waiting to be explored.