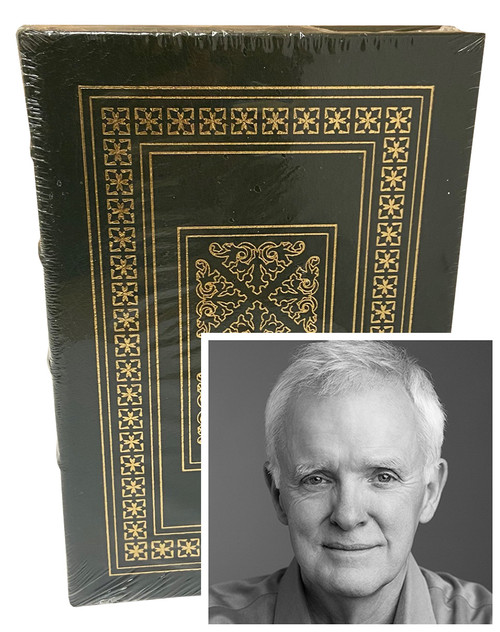 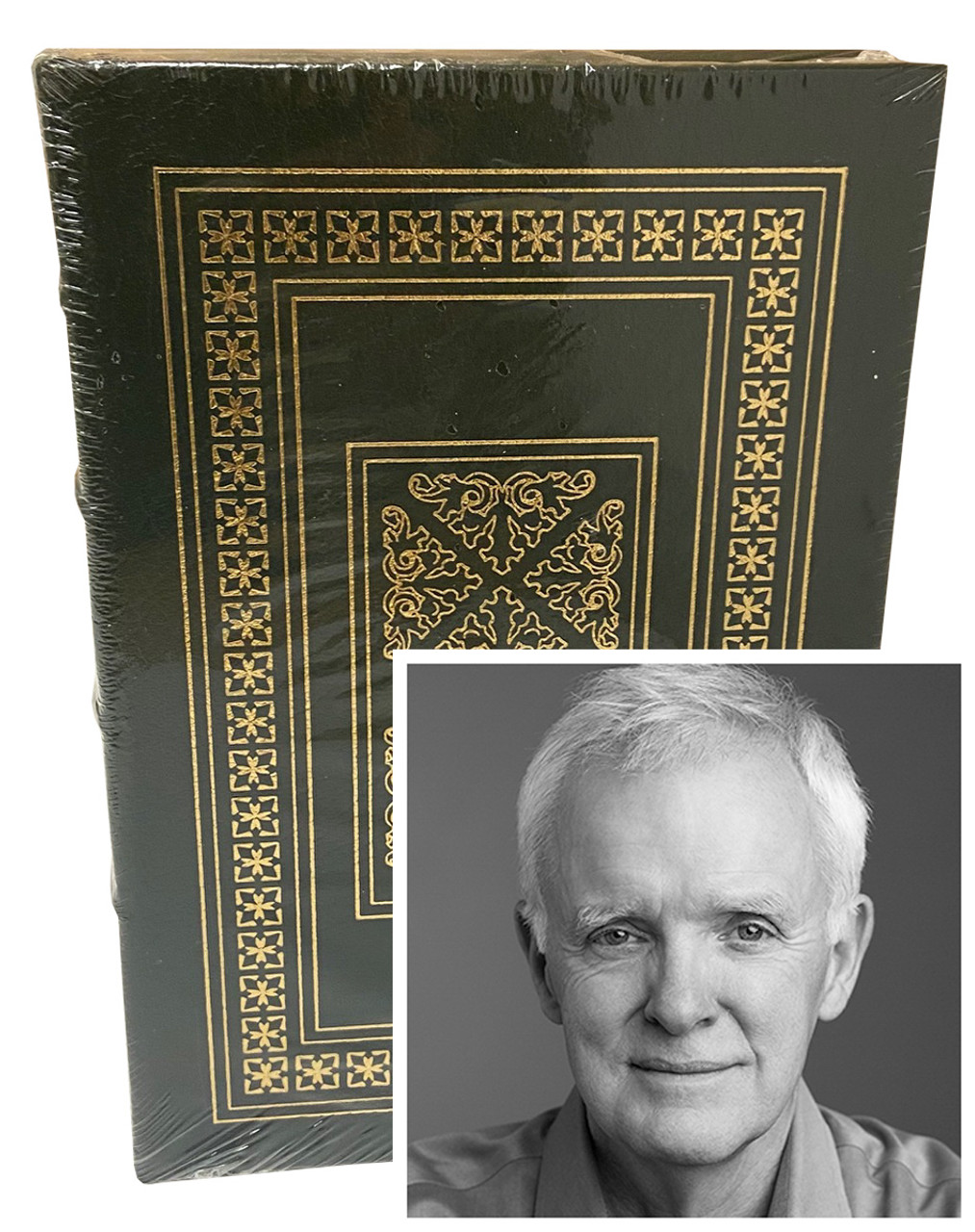 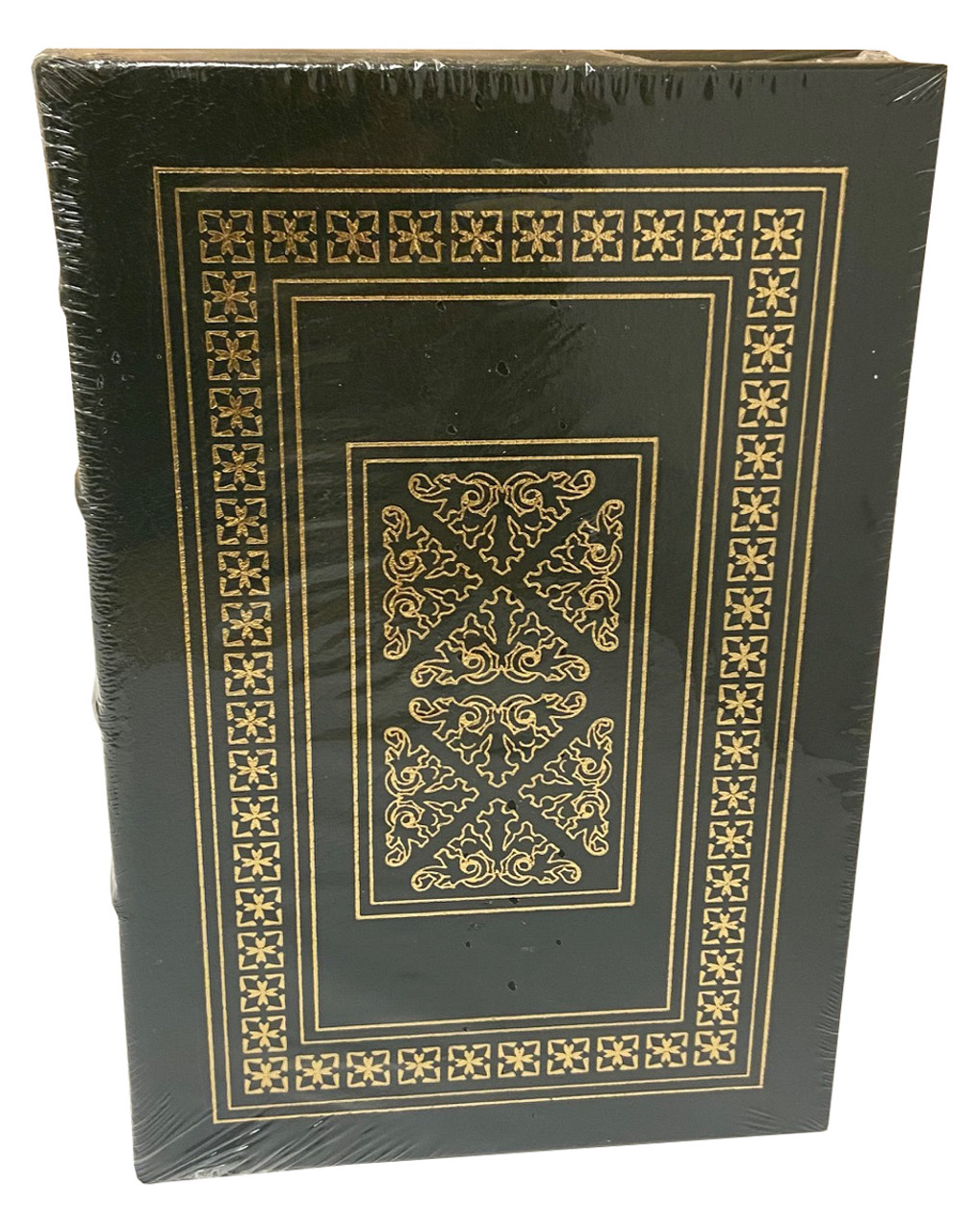 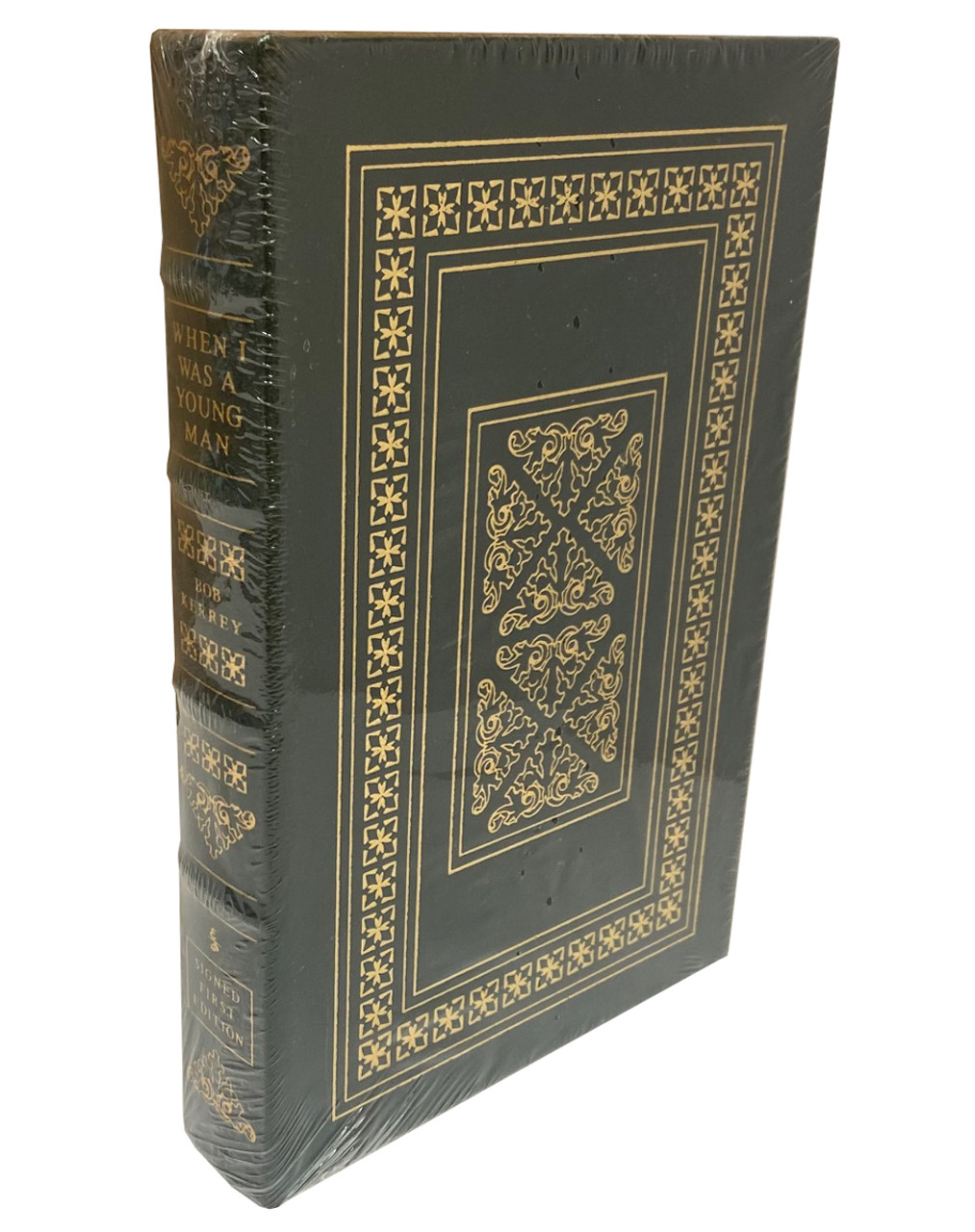 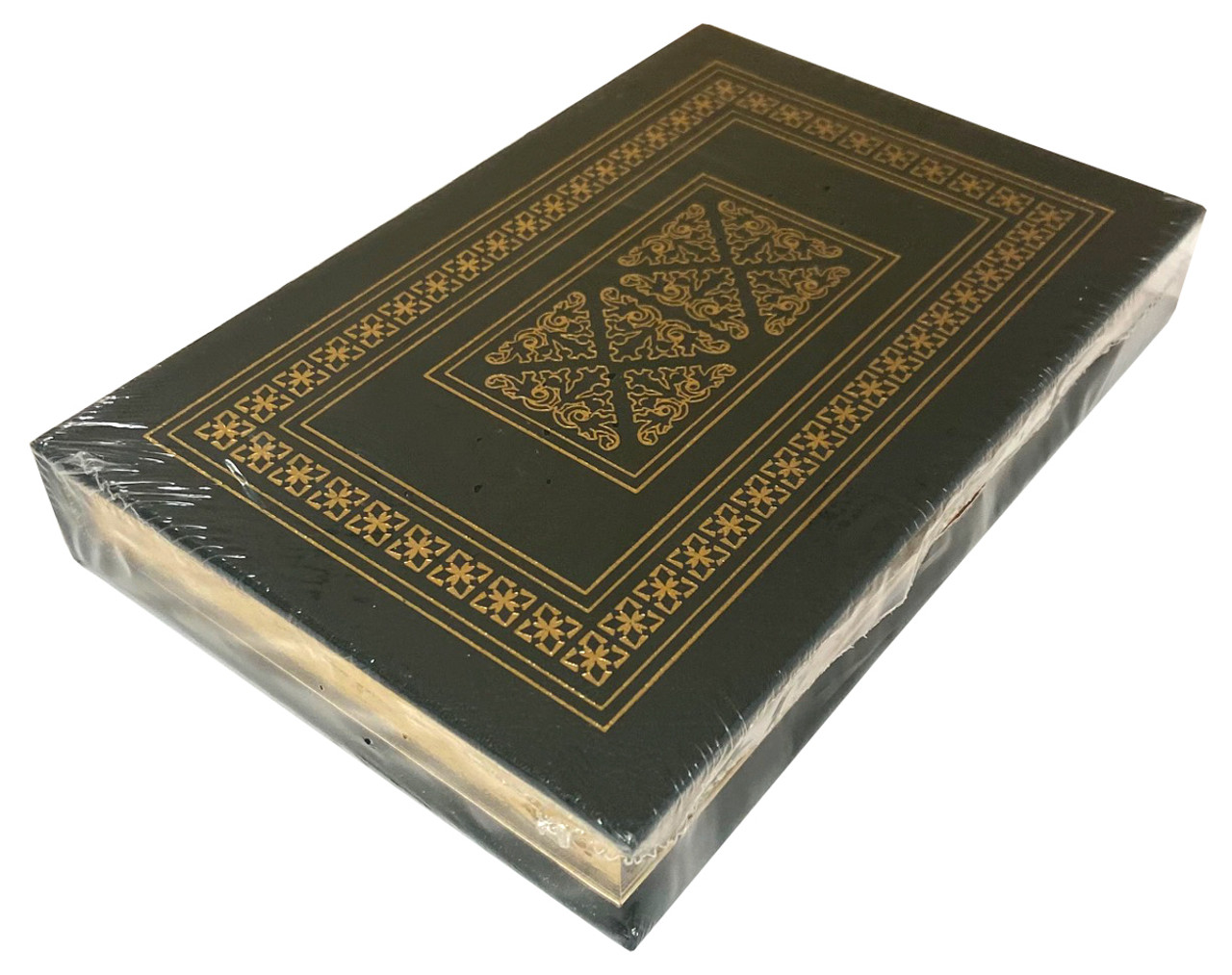 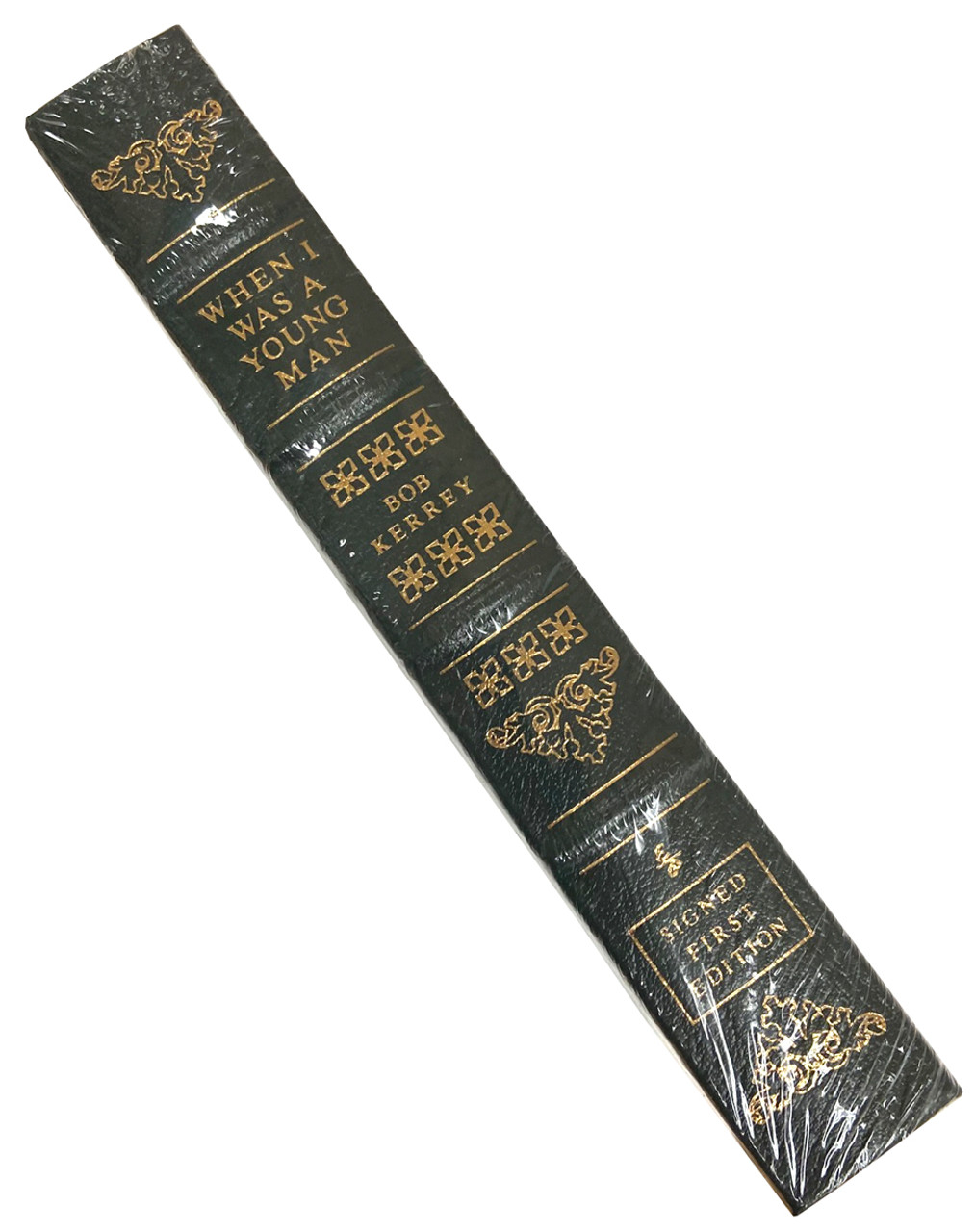 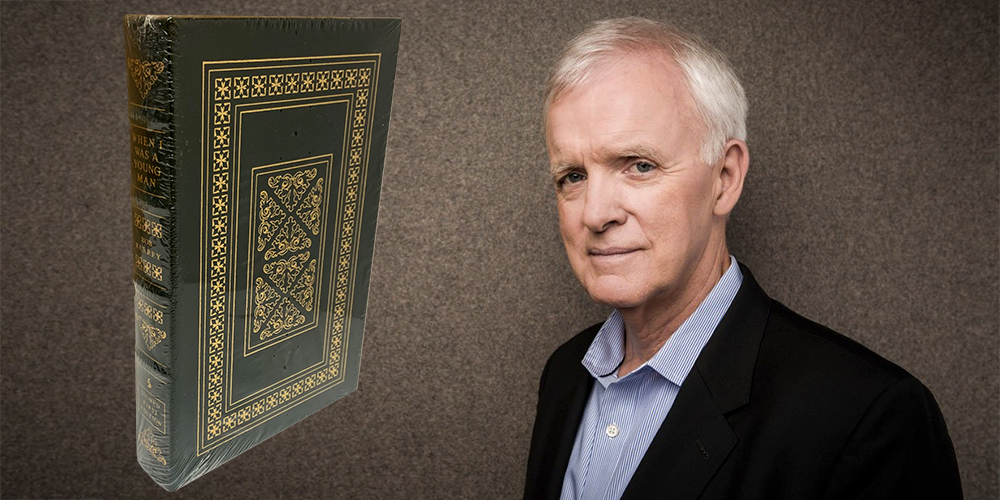 Easton Press, Norwalk, CT. 2002. Bob Kerrey "When I Was A Young Man". Signed First Edition. Signed by the author on the special titled and numbered page. Certified by the publisher to be authentic. A luxurious signed leather bound heirloom, accented with 22kt gold, manufactured to last generations. A high quality book that would make the perfect gift. Sealed without any flaws.

Bob Kerrey grew up outside Lincoln, Nebraska, in the 1950s, and in his trademark style - serious, sometimes wry - he tells of his journey from that heartland to the dangers of Vietnam, to the hospitals where he recovered from his grievous injuries, and finally to the Nixon White House where he was awarded the Medal of Honor.

Inspired by the stories of biblical heroes and thrilled by the cowboy serials he saw at the movies on Saturday afternoons, Kerrey grew up in a world as safe and quiet as anywhere you could find on Earth. When he went off to college he knew or cared little about what lay beyond Nebraska, though soon his life would be changed forever. Bob Kerrey comes from a family of soldiers, and so, when the Vietnam draft loomed, he volunteered for the elite Navy SEALS, hoping for adventure and the honor of serving his country. After his arrival in Vietnam, he had to face the brutal reality of the war. In his first firefight, women and children died. His second encounter cost him part of his leg. In his year at the Naval Hospital in Philadelphia, he drew strength from his fellow patients, some more disabled than he, and he learned to walk again. But he had turned against the war and could no longer find solace in his religion.

A quest begins and ends this book. When his father was dying, he asked Kerrey to find out how his Uncle John had really died in World War II. It is this quest that inspires Bob Kerrey as he describes his own personal odyssey in this remarkable and powerful book.

"An affecting memoir of youth in the Cold Warera American heartland and life and death in Vietnam. Of particular interest to veterans, and certain to attract still more discussion." -- Kirkus Reviews

"A haunting and ruthlessly honest memoir, not the story of a hero, but of something far more important: of a youth coming of age in a time when all the old assumptions about life were being challenged. His is a tale of triumph over adversity which provides a lesson for America in a new time of challenge and anxiety." -- Haynes Johnson, author of Best of Times

"Bob Kerrey has given so much to his nation. And now more. When I Was a Young Man is a narrative of war and loss, yet life enhancing withal." -- Daniel Patrick Moynihan

"This story of an American becoming a man is also a story of the country coming of age and it has these classic American virtues: candor, humility, reluctant courage. It is deeply moving and a delight." -- Richard Ben Cramer, author of Joe Dimaggio

Before entering politics, Kerrey served in the United States Navy as a SEAL officer during the Vietnam War. He completed Officer Candidate School in Newport, R.I in 1967. He then received assignment to Naval Amphibious Base Coronado and subsequently completed Basic Underwater Demolition/SEAL (BUD/S) training with class 42 in December 1967. He volunteered for and received direct assignment to SEAL Team ONE, a separate organization from the Underwater Demolition Teams that personnel were normally assigned. After pre-deployment training, Kerrey deployed to the Republic of Vietnam as assistant platoon commander with Delta Platoon, SEAL Team ONE in January 1969. He was seriously wounded and lost the lower part of his right leg in combat on Hon Tre island near Nha Trang Bay on March 14, 1969. While suffering shrapnel wounds and blood loss, Kerrey organized his squad in a counterattack that killed or captured enemy Viet Cong. He was later medically discharged from the US Navy for his combat wounds. On May 14, 1970, President Richard Nixon awarded Kerrey the Medal of Honor at the White House for his heroic actions in 1969.

Kerrey was a candidate for the Democratic presidential nomination in 1992. He retired from the Senate in 2000 and was replaced by former Governor and fellow Democrat Ben Nelson. From 2001 to 2010, he served as president of The New School, a university in New York City.

Personally signed by Bob Schieffer, the American television journalist who has been with CBS News since 1969. Limited to only 1,650 signed and numbered copies.