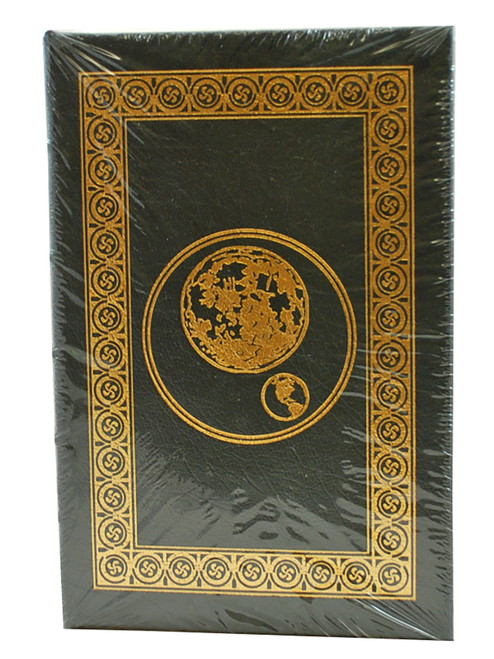 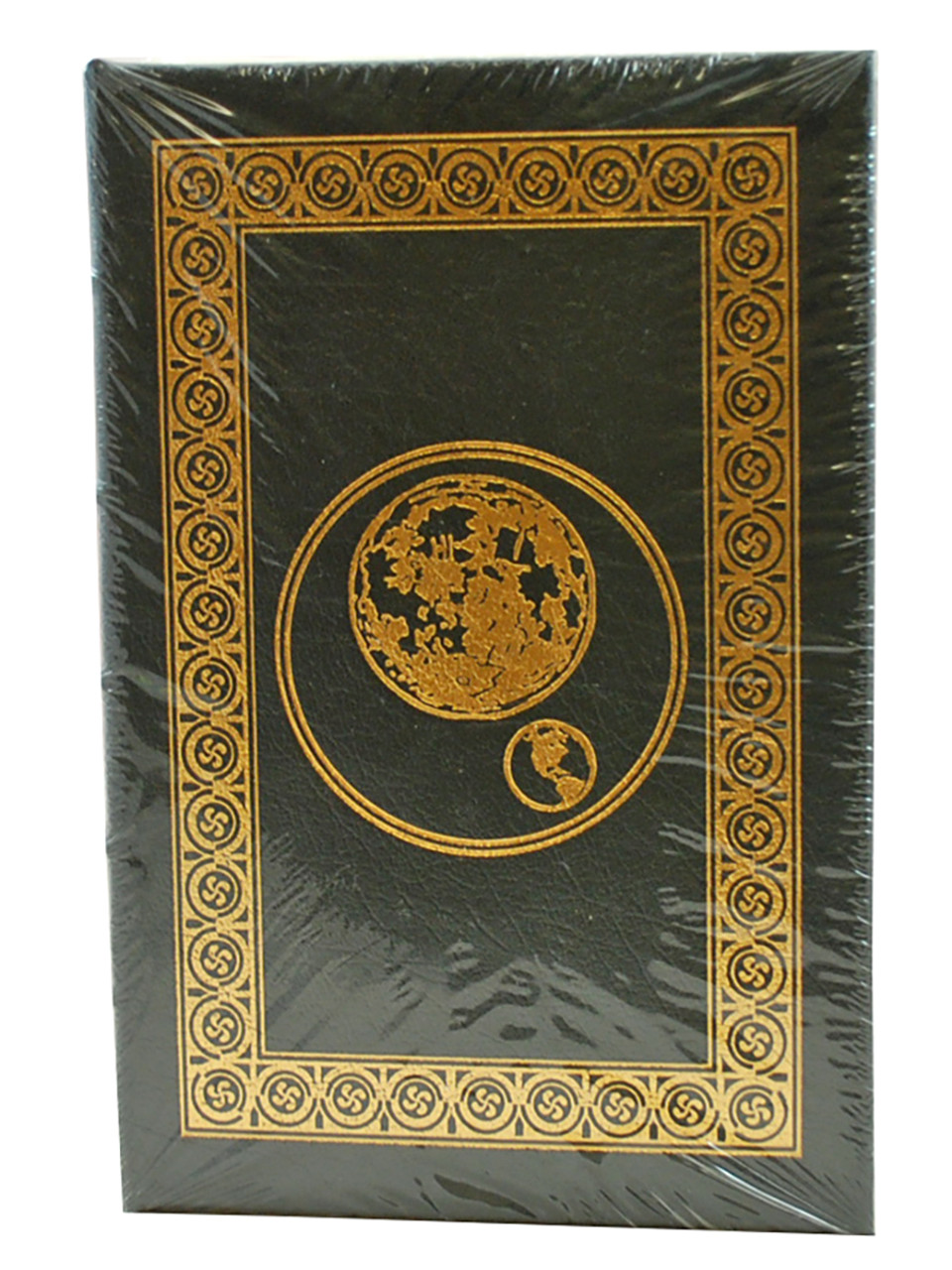 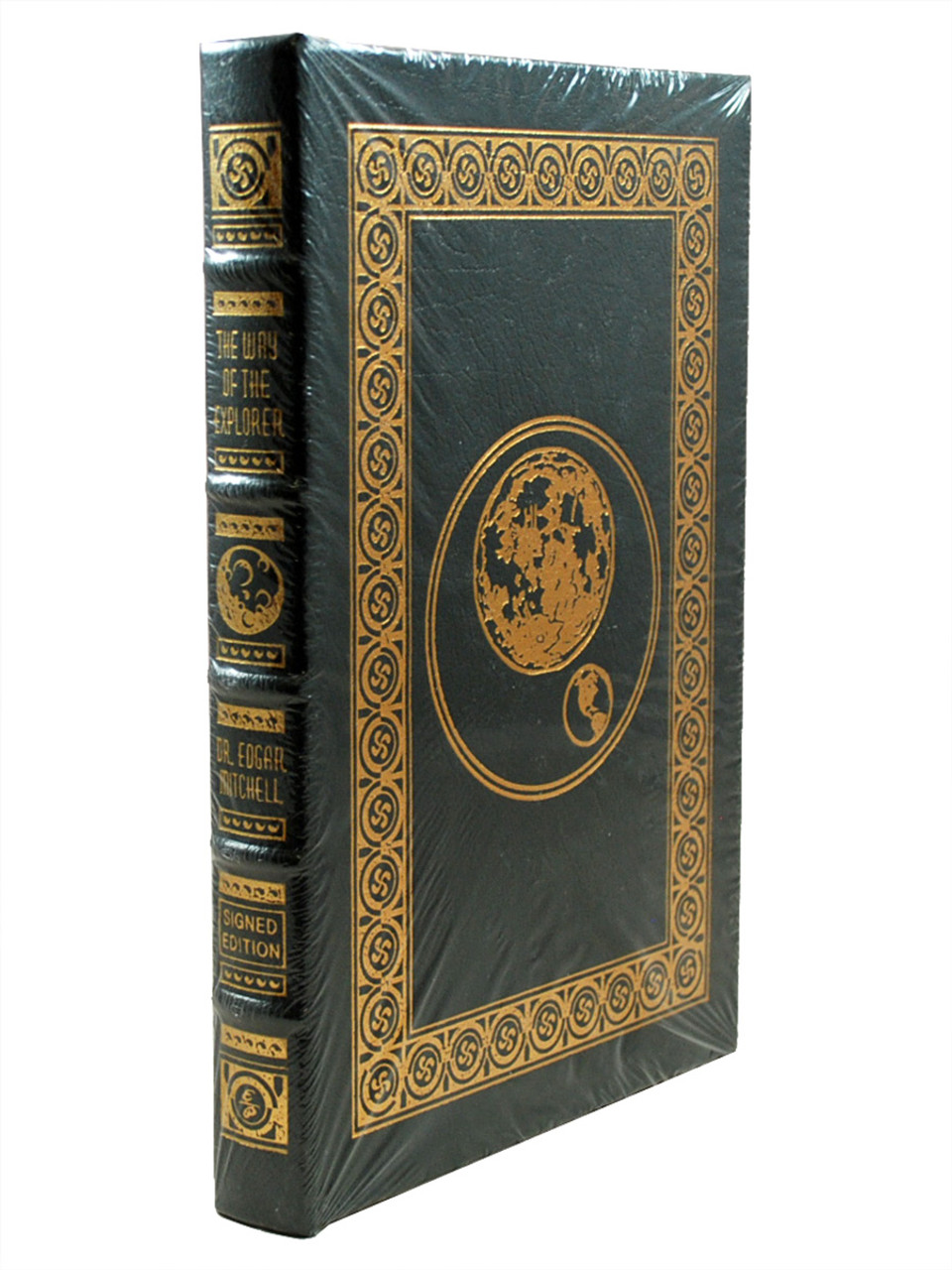 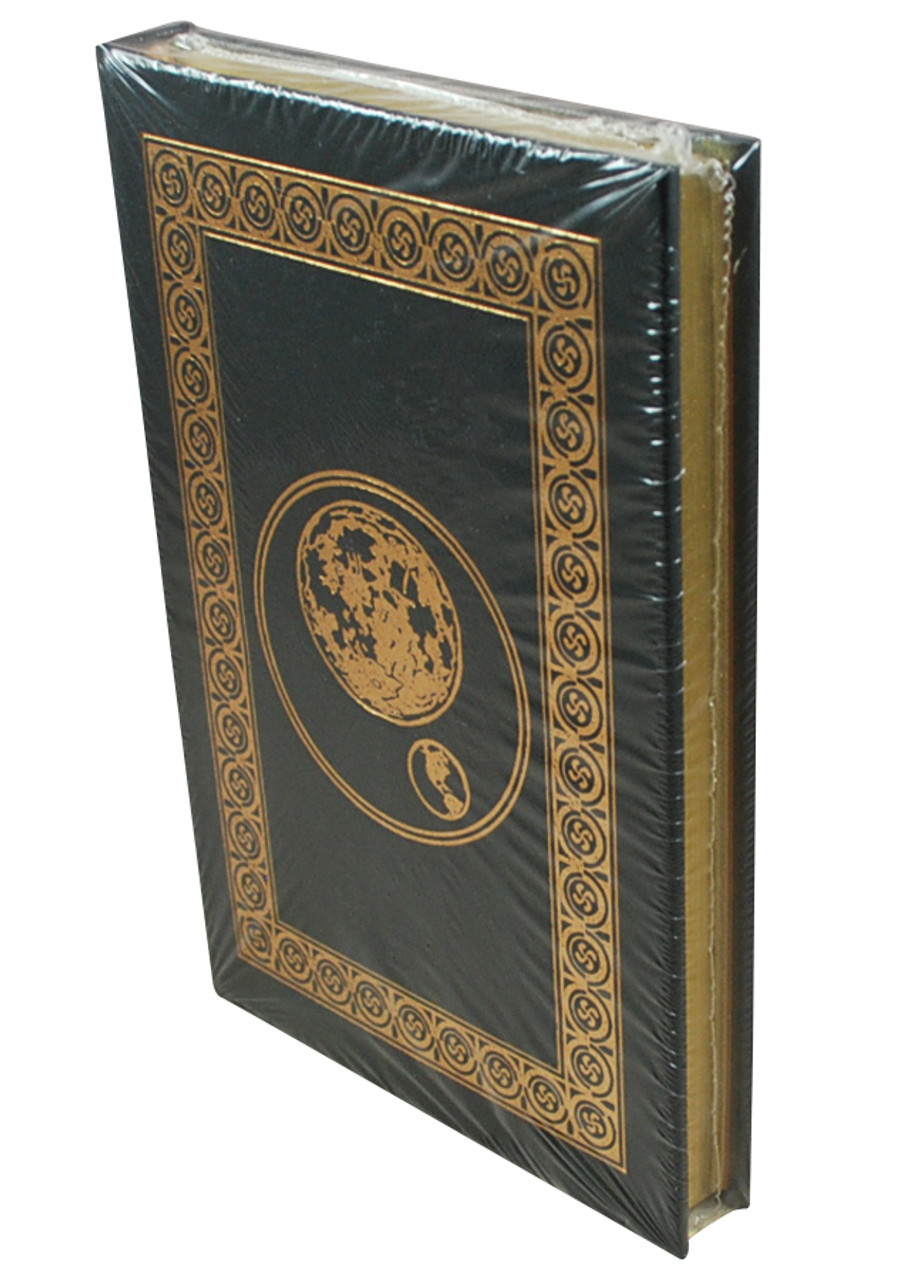 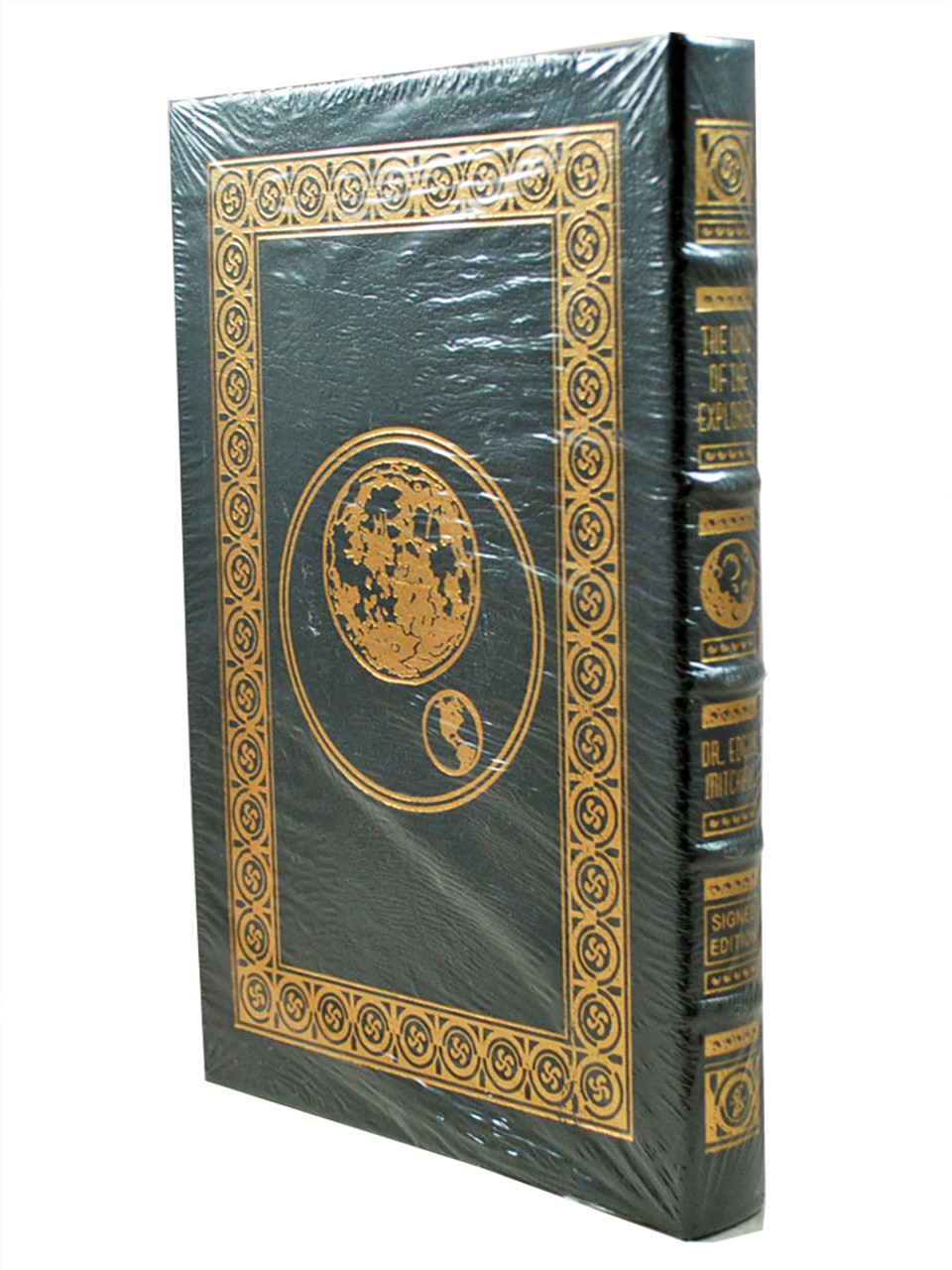 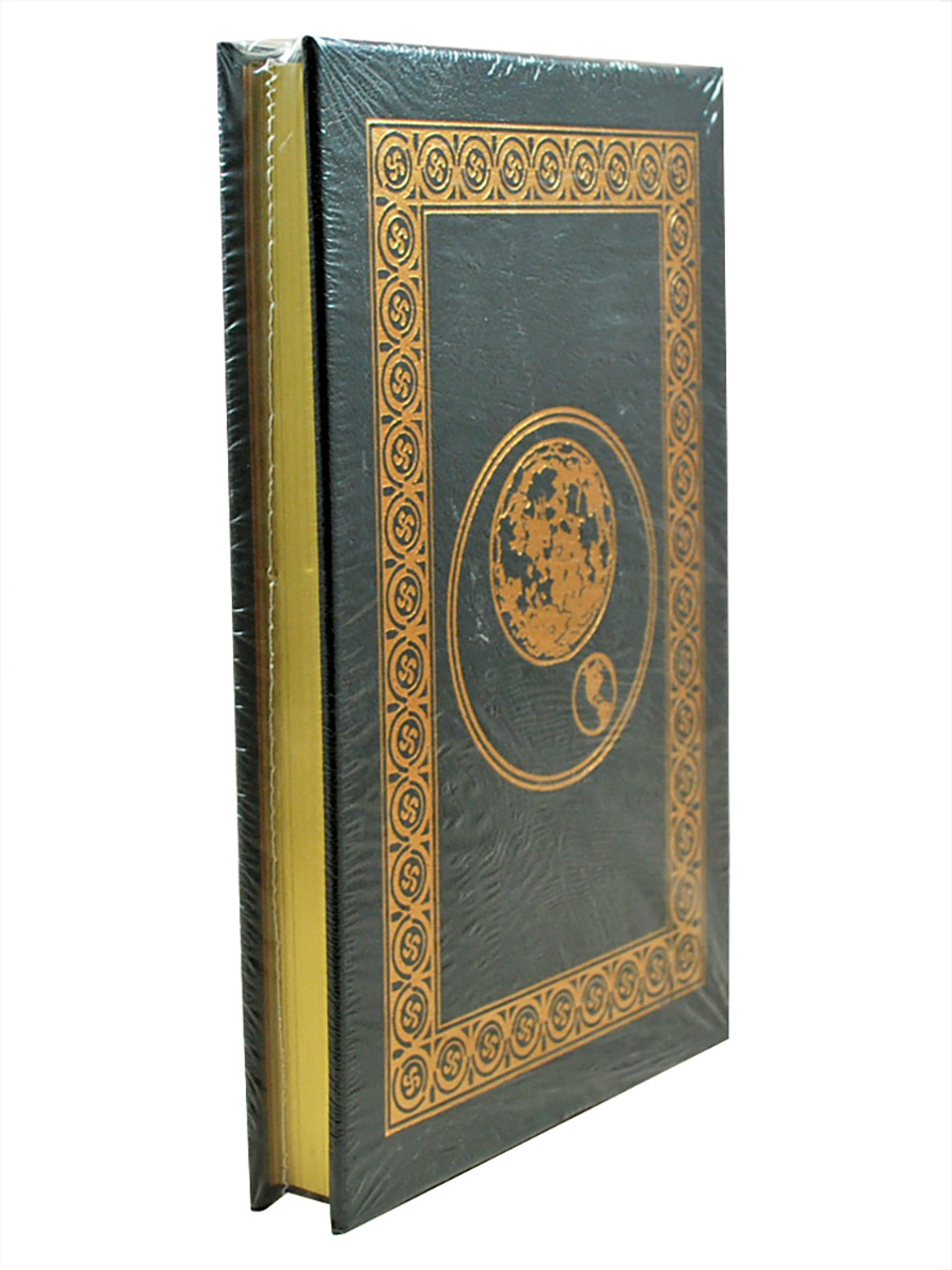 Dr. Edgar Mitchell is one of only 12 men who ever walked on the surface of the moon. The Way of the Explorer features the memoirs, vision and post-NASA journey of the Apollo 14 astronaut hero.

This is a leather bound signed edition of Dr. Edgar Mitchell's best-selling memoir - "The Way of the Explorer", the fascinating story of the famous NASA astronaut and Apollo 14 crew member.

In February 1971, as Apollo 14 astroanaut Edgar Mitchell hurtled Earthward through space, he was engulfed by a profound sense of universal connectedness. He intuitively sensed that his presence and that of the planet in the window were all part of a deliberate, universal process and that the glittering cosmos itself was in some way conscious. The experience was so overwhelming, Mitchell knew his life would never be the same.

"Edgar Mitchell is one of those rarest of scientists--a true explorer. His journey into outer space has been matched by a lifelong journey into inner space, where he investigated the final frontier, the nature of mind, and returned with nothing less than an extraordinary new science of life." --Lynne McTaggart, best-selling author of The Field and The Intention Experiment, Reviews

"In the history of the human race, 12 people have set foot on the moon. Now one of them has written an important book, an account of a modern-day hero's journey. Astronaut Edgar Mitchell pursued a vision, ventured on a quest, risked great danger, and obtained uncommon wisdom. Now he has returned to share it. We would be wise to listen." --Larry Dossey, M.D., author of Healing Words, Reviews

"Profound and articulate...Edgar Mitchell has really dug into the main paradoxical issues [of science and religion] and comes up with a resolving viewpoint. An inspiring piece of literature." --Harold E. Puthoff, Ph.D., physicist, Institute for Advanced Studies at Austin, Reviews

"Reading astronaut Mitchell's story is like reading a long-awaited letter from a friend--a friend who has journeyed far and wide and seen so much beyond most of us that we read with bated breath. Mitchell's writing is exciting, insightful, and majestic, at once a logical, scientific, and moving spiritual vision. As I read the book I felt I was looking through his eyes, sensing the unity of the world and seeing our planets and universe for the first time." --Fred Alan Wolf, author of The Yoga of Time Travel and Taking the Quantum Leap, Reviews

Mitchell was selected in 1966 as part of NASA's fifth astronaut group. He was assigned to the support crew for Apollo 9, then was designated as backup Lunar Module Pilot for Apollo 10. This placed him in rotation for Apollo 13, but his crew was switched to Apollo 14 so that Commander Alan Shepard, who had been grounded by a medical problem since the Gemini program, could train longer. During the Apollo 13 crisis, Mitchell was a part of the Apollo 13 Mission Operations Team and as such was awarded the Presidential Medal of Freedom by President Richard M. Nixon in 1970. He Worked in an Apollo simulator to help bring the crew back. One issue he worked on was how to "fly" the Lunar Module with an inert Apollo command/Service Module attached to it. He then went to serve as Lunar Module Pilot on Apollo 14, landing with Shepard aboard the Lunar Module Antares on February 5, 1971, in the hill upland Fra Mauro Highland region of the Moon. the stayed on the Moon for 33 hours, deployed and activated the lunar surface scientific equipment and experiments, and collected about 100 pounds of lunar samples for return to Earth. In completing his firs space flight, Mitchell logged a total of 216 hours in space. He was subsequently designated to serve as backup Lunar Module Pilot for Apollo 16. During that mission, he took photos, including the one with Shepard raising the American flag. In the photo Mitchell's shadow is cast over the lunar surface near the flag. That photo was listed on Popular Science's photo gallery of the best astronaut selfies. 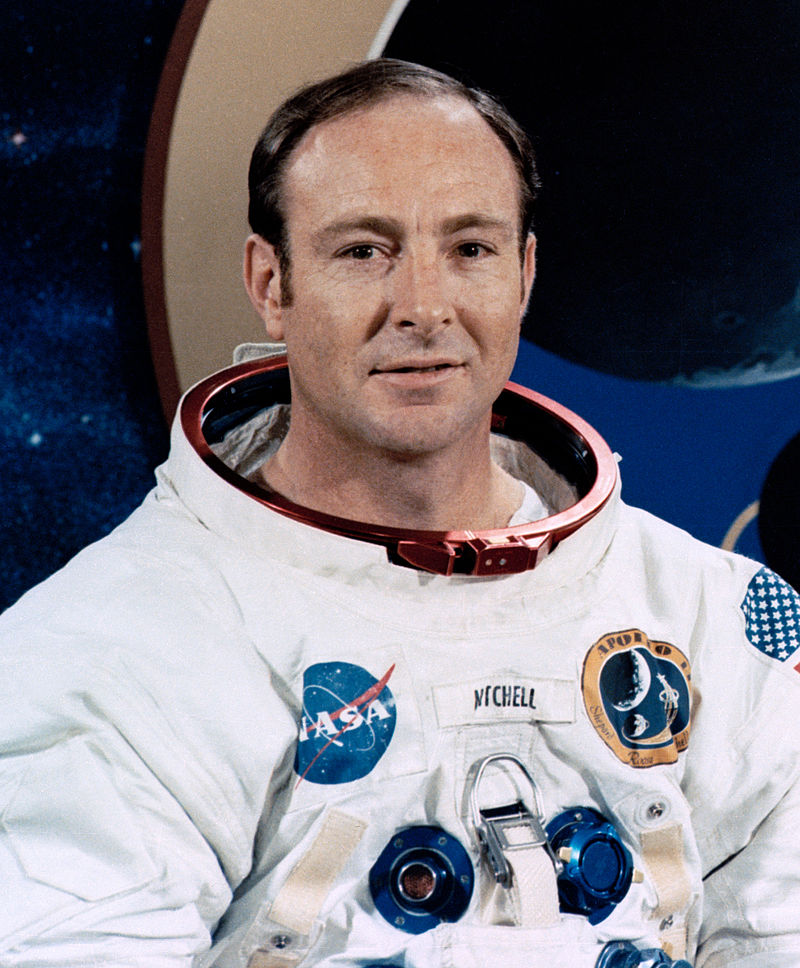