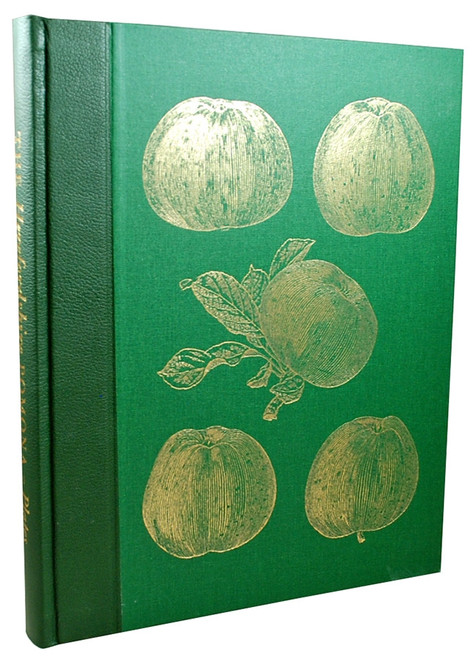 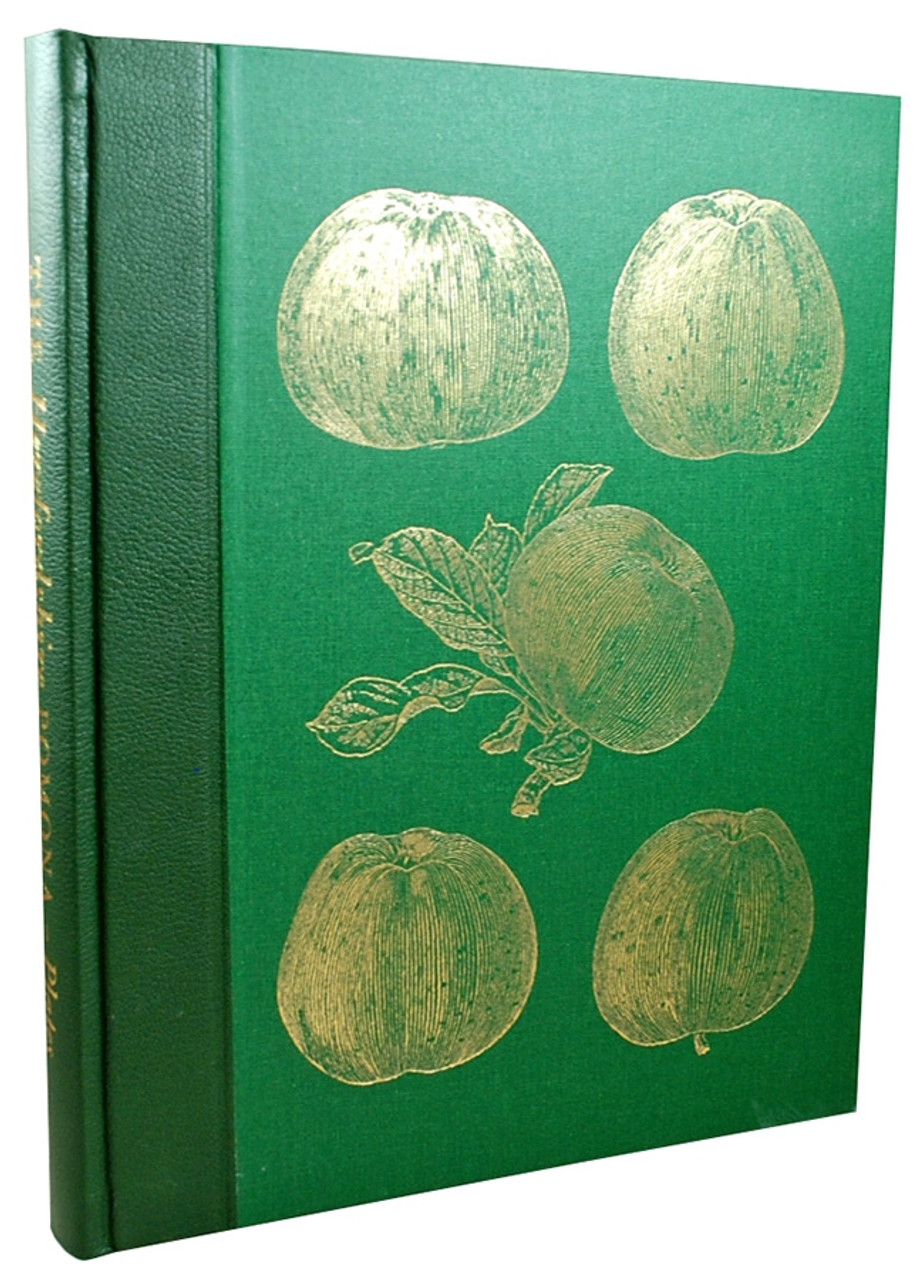 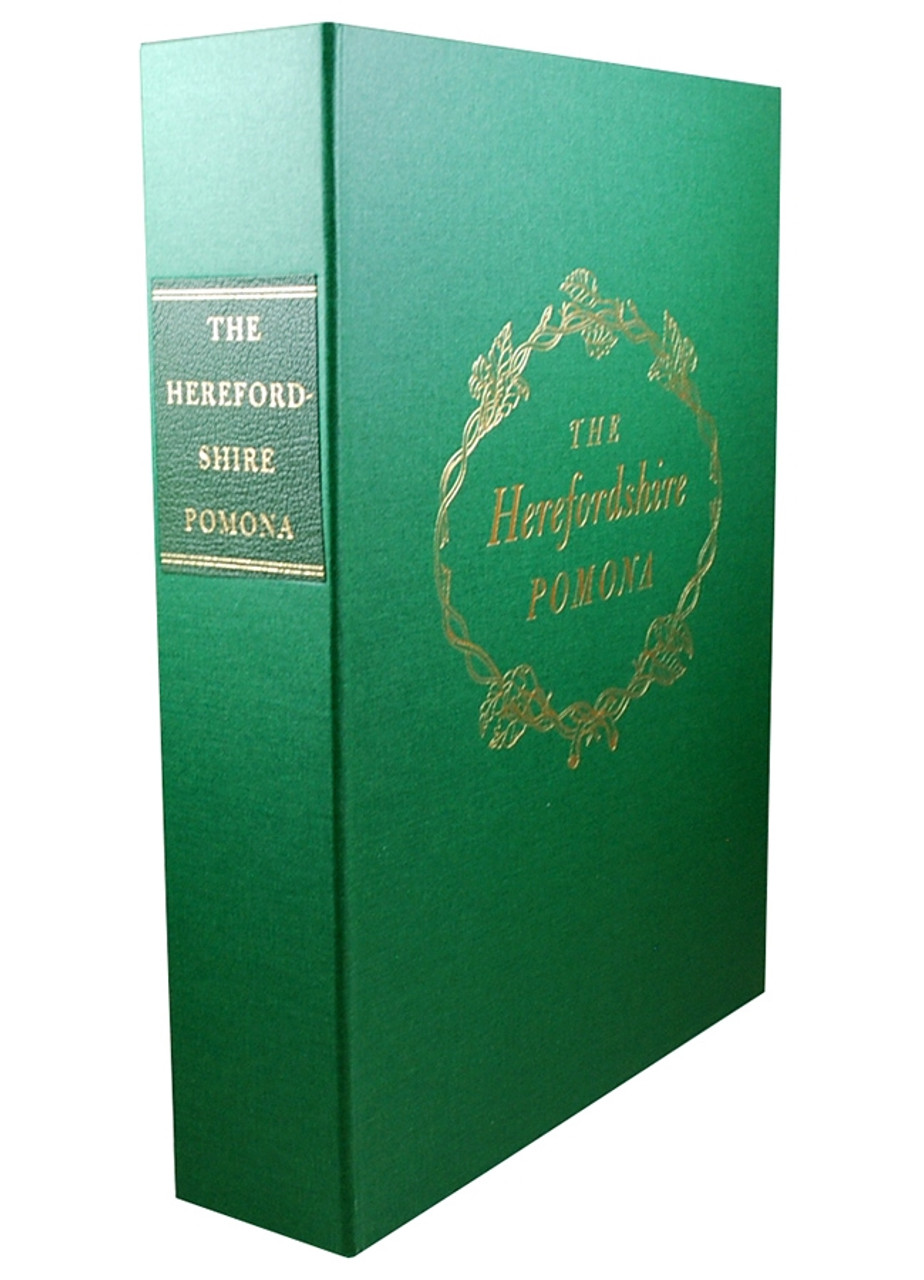 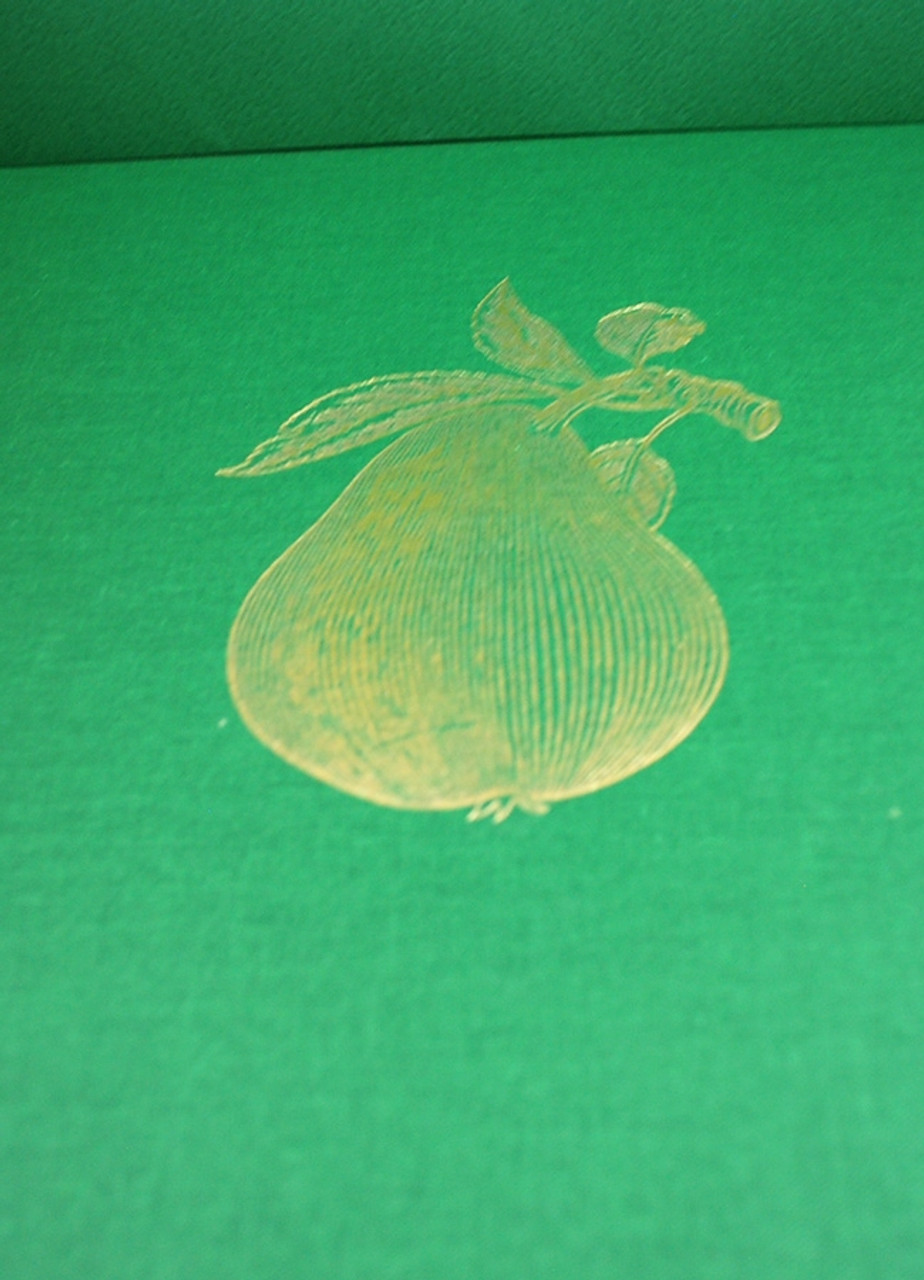 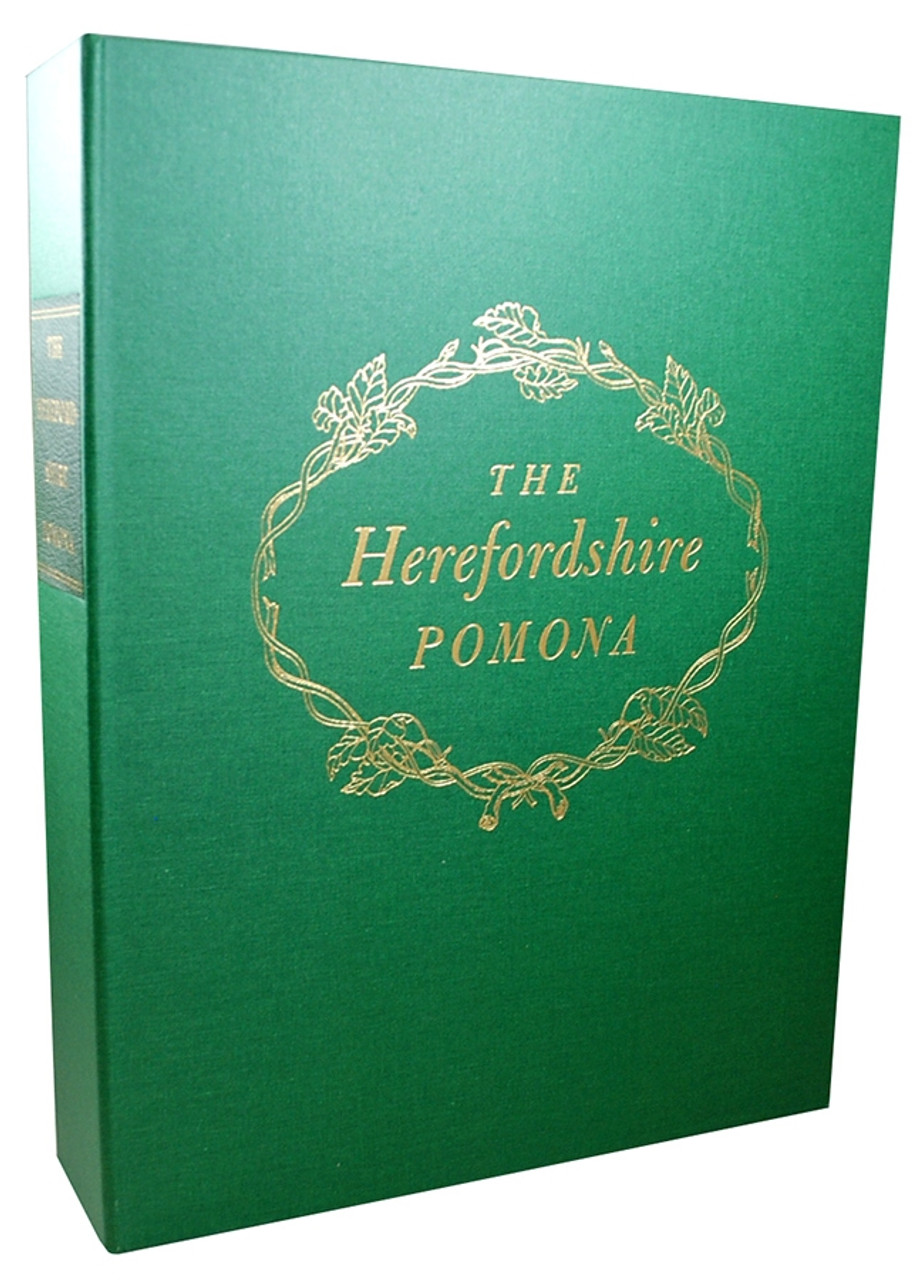 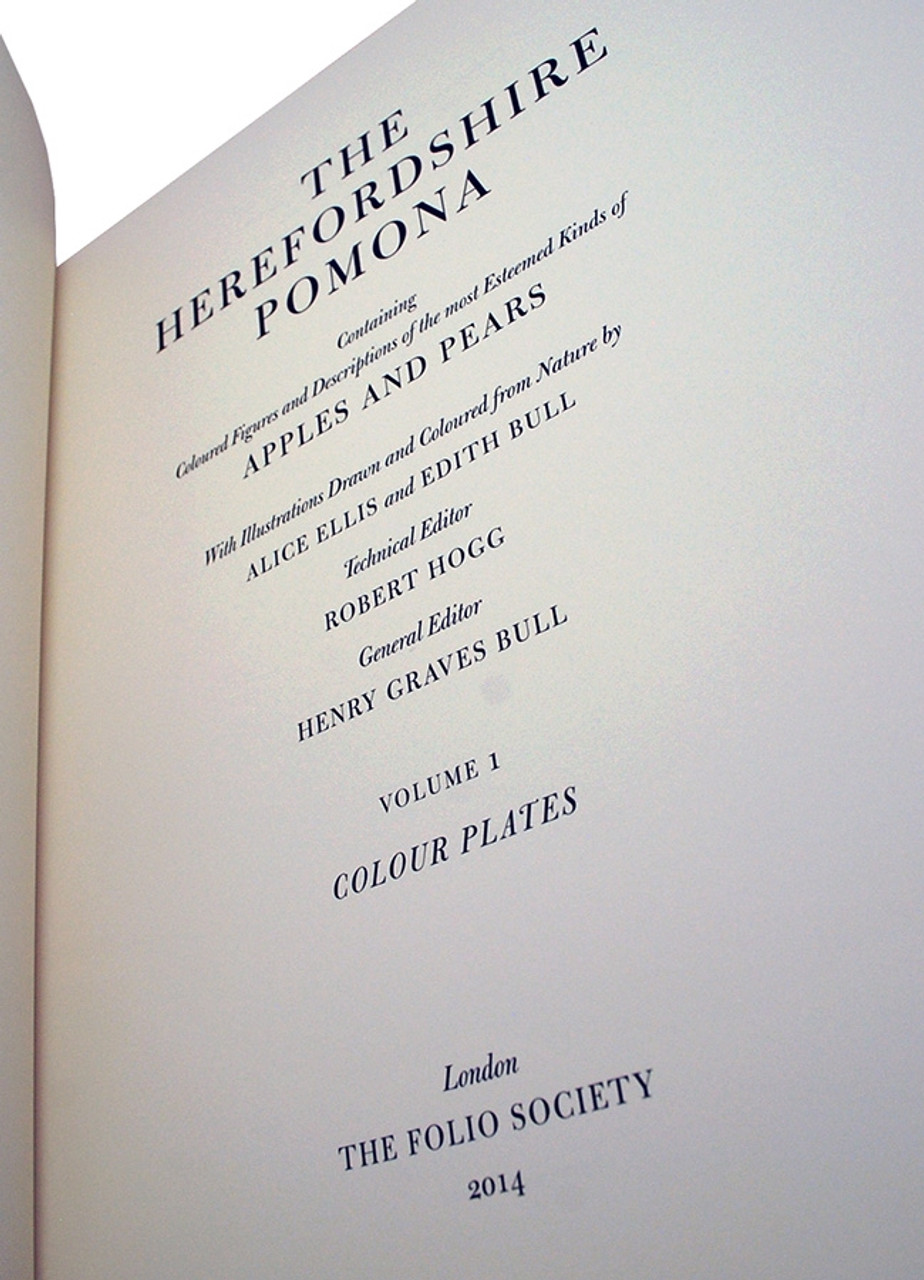 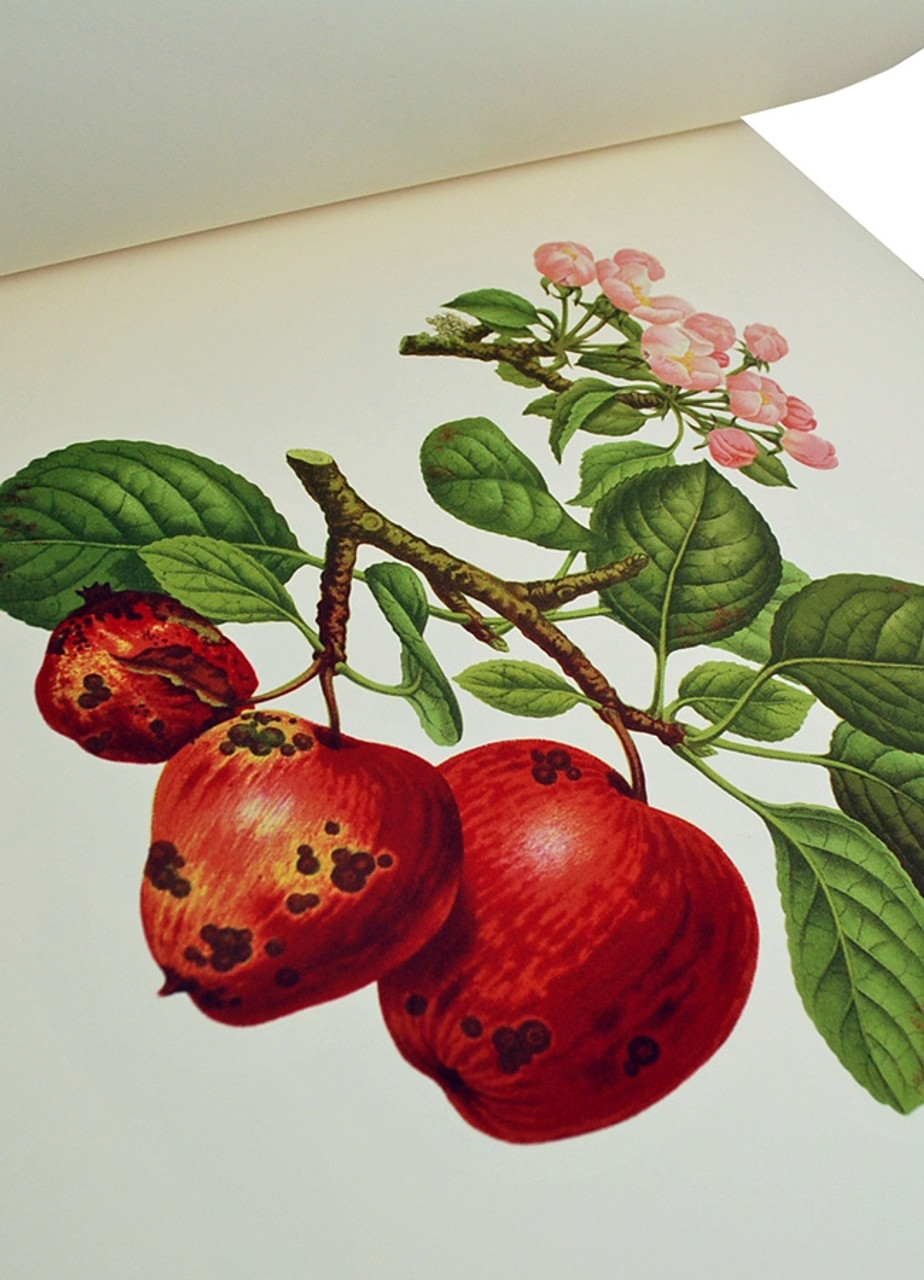 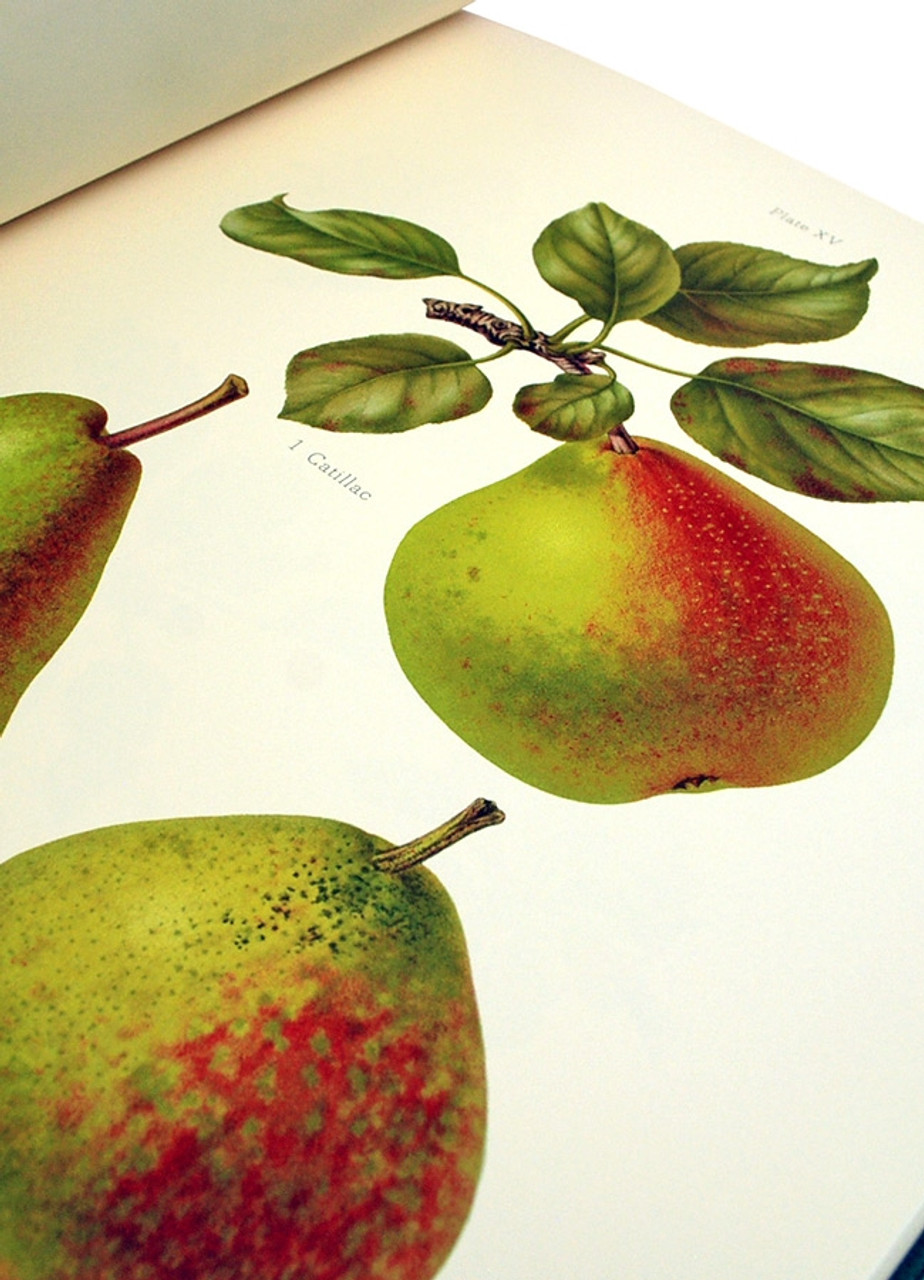 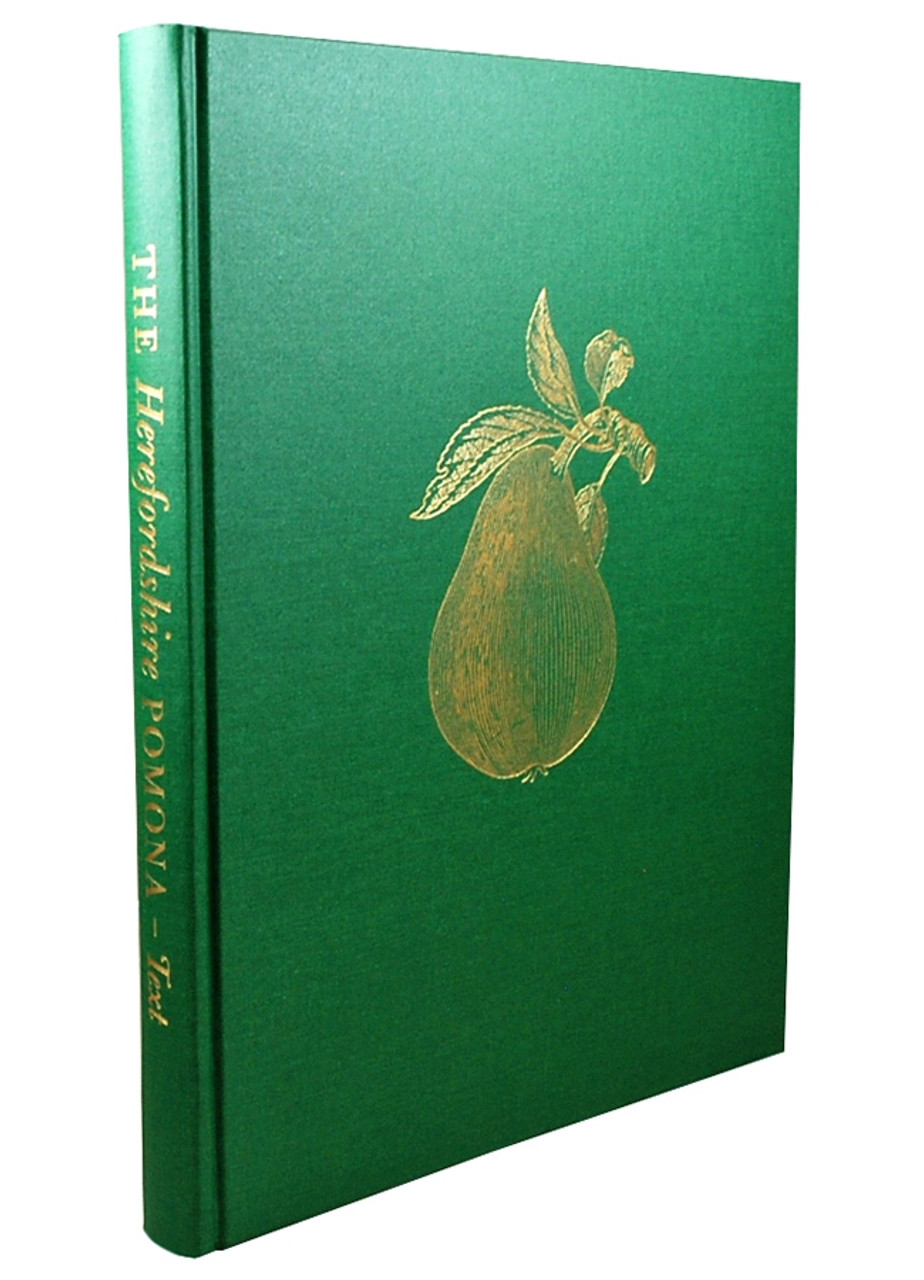 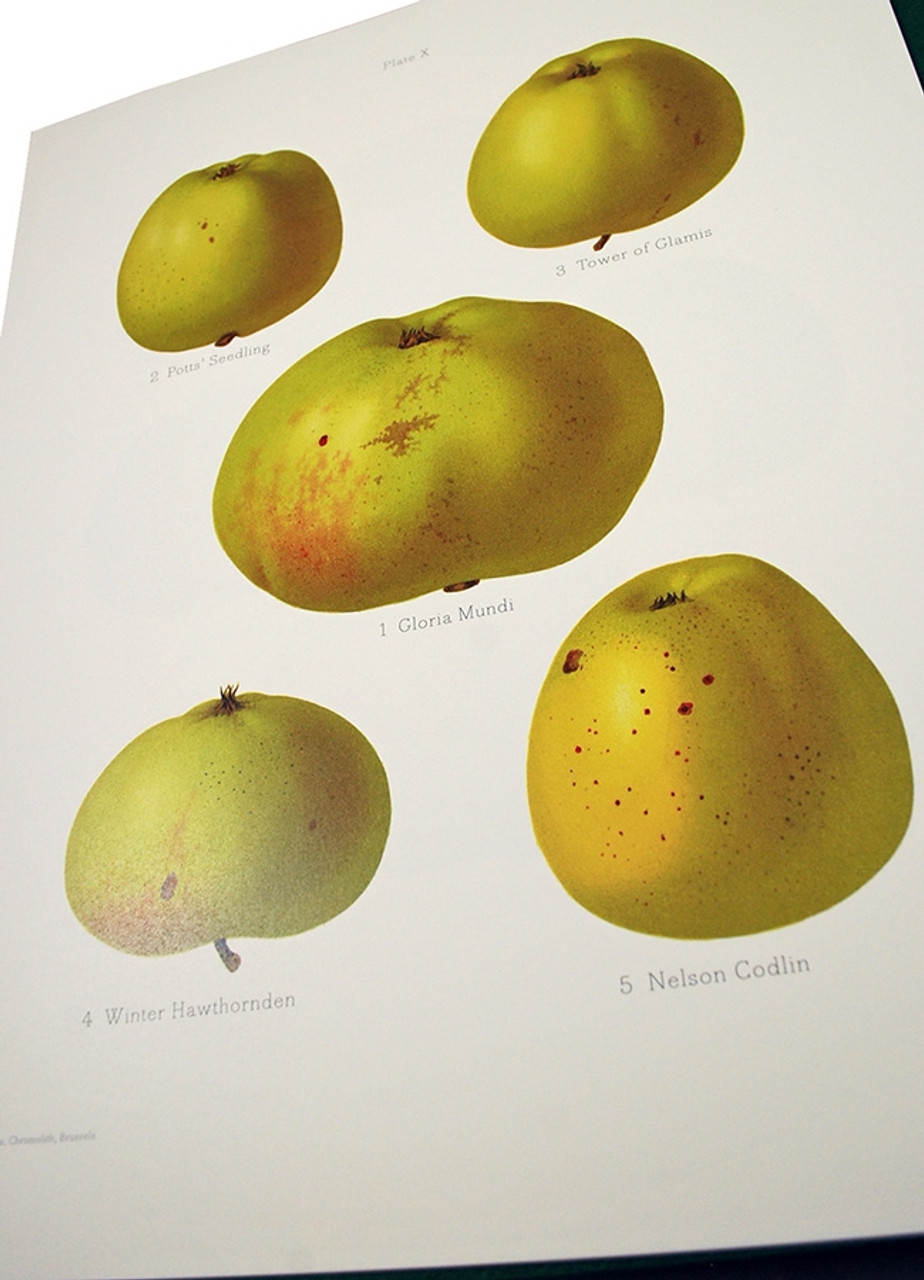 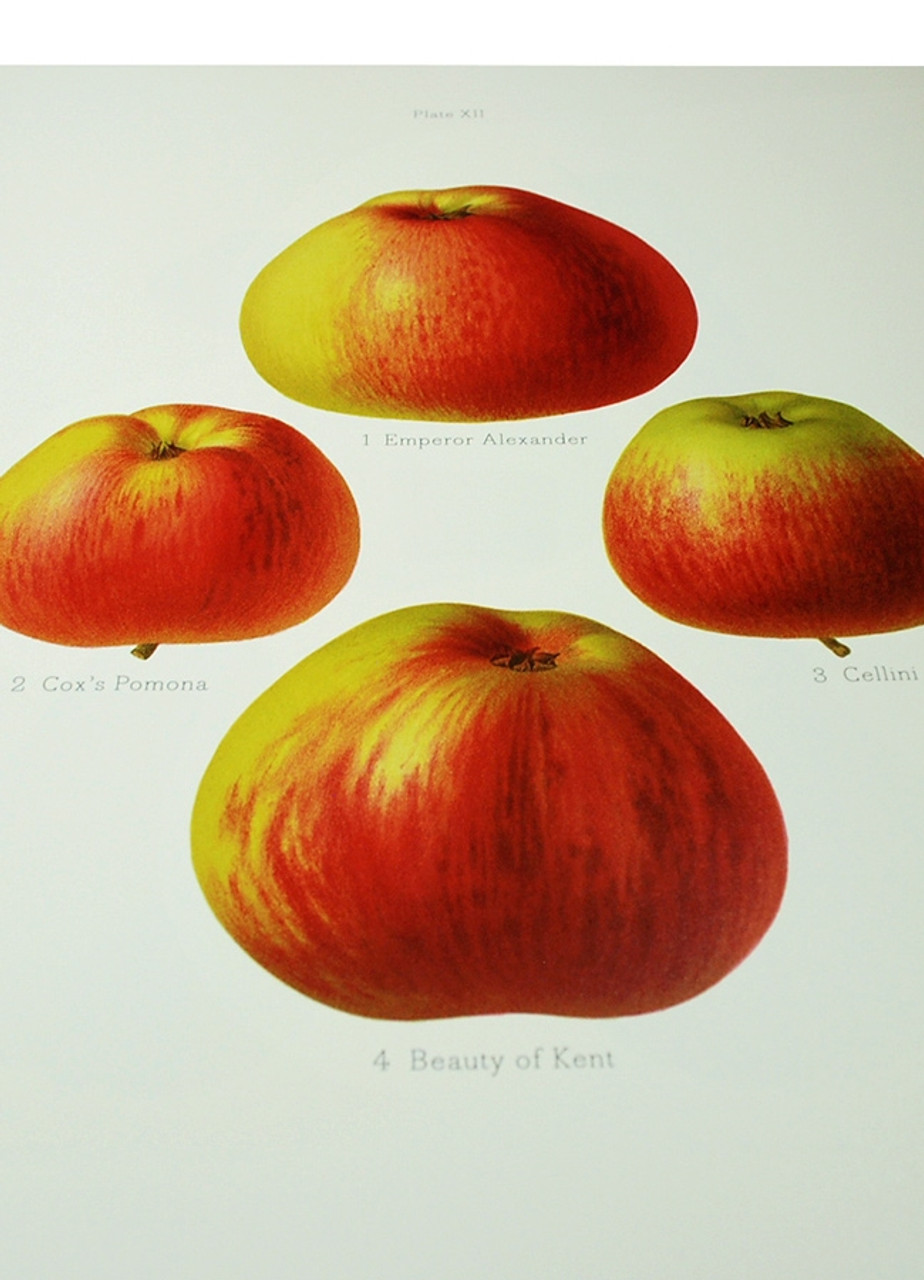 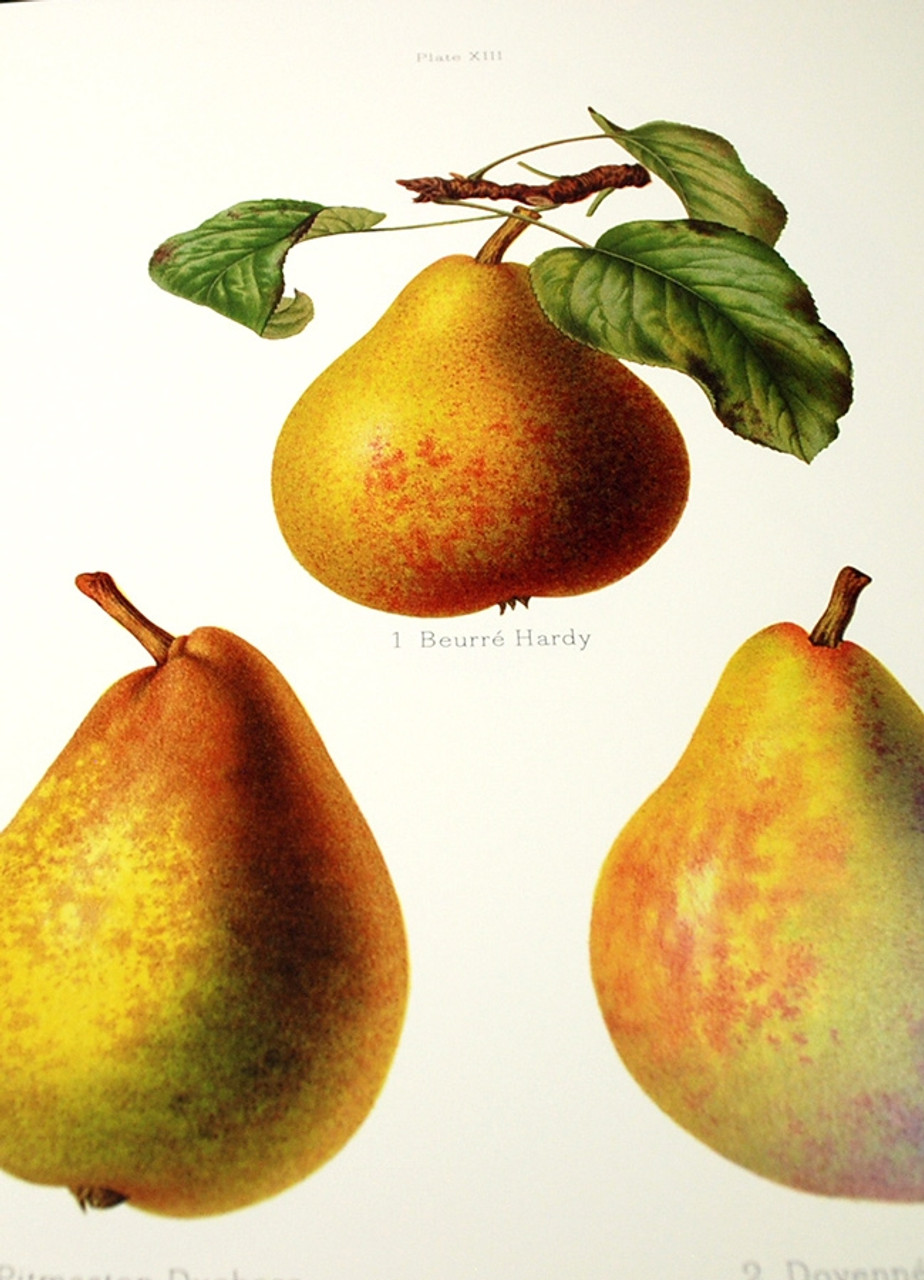 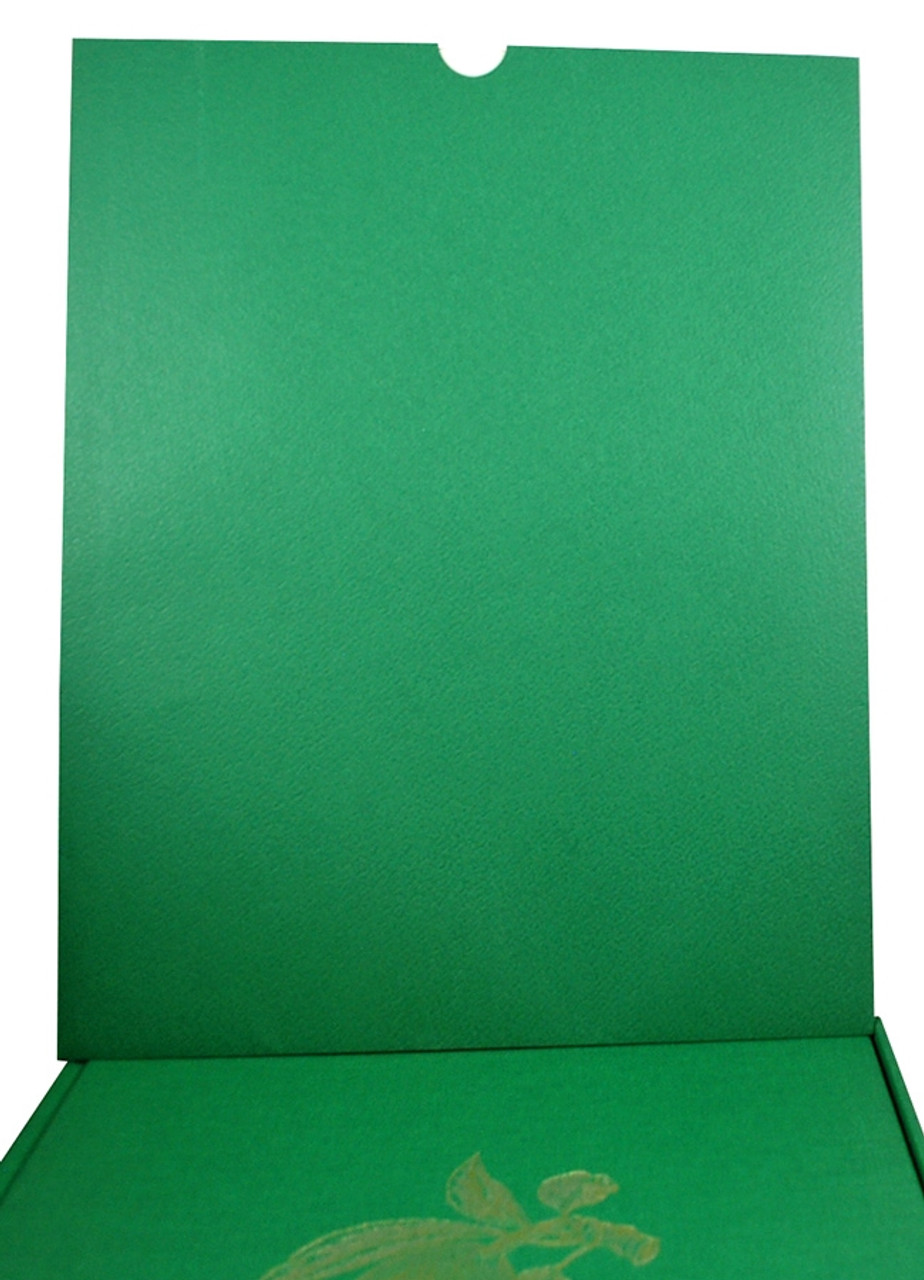 
Originally issued in 1876-1885, the Herefordshire Pomona was "one of the finest fruit books ever issued" (Great Flower Books) and the most comprehensive study of the apples and pears grown in Britain ever published, with 432 different varieties all beautifully illustrated on 77 chromolithographed plates.

The Herefordshire Pomona is the most comprehensive study of the apples and pears grown in Britain ever published, with over 430 different varieties all beautifully illustrated. Every fruit is also discussed in an erudite and fascinating text whose rich collection of stories supporting its descriptions takes us from precise taxonomy into the colourful byways of English rural life. This edition, limited to 1,000 copies, is the first ever produced since the exceedingly rare original printing from the late 1880s.

What is immediately and strikingly apparent is that The Herefordshire Pomona is a book of great beauty. The images of apples and pears have such vitality, such lustre, they could almost be picked from the page. The plates in the original edition are lauded as masterpieces of chromolithography and are rendered here with great fidelity by modern printing methods.

Though commissioned in Herefordshire, this Pomona was to become a record and a guide to identification for varieties grown throughout the British Isles, many of which were originally imported from America and mainland Europe, thus giving it a relevance to fruit-growing worldwide.

The pages of The Herefordshire Pomona are a treasure trove of engaging historical anecdotes and apt verses, as well as guides to propagation, analyses of juice and notes on the quality of ciders. With Hortus Eystettensis, The Surinam Album and The Temple of Flora, amongst others, it shares a noble literary heritage of natural history going back at least as far as Pliny the Elder.

The Pomona, an Illustrious History

Illustrated fruit books, known as Pomonas after the Roman goddess of fruitfulness, orchards and gardens, have a long and distinguished history stretching back to Cosimo de Medici in the 17th century. As the science of pomology developed, so did the works supporting it, notably J. H. Knoop’s Pomologia (1758), George Brookshaw’s Pomona Britannica (1812) and Charles M. Hovey’s The Fruits of America (1852–6). The Herefordshire Pomona was conceived as a successor to Thomas Andrew Knight’s Pomona Herefordiensis of 1811, although its scope was soon extended far beyond the county’s boundaries.

The Woolhope Naturalists’ Field Club commissioned the work in 1874, having noted the sad decline of Herefordshire’s orchards during their Fungus Forays. The book took many years and vast sums of money to complete, and was originally published in seven issues between 1878 and 1885. The General Editor was former Woolhope Club President Dr Henry Graves Bull, while the Technical Editor was the Vice-President of the Royal Horticultural Society, Dr Robert Hogg – widely acknowledged as the father of pomology. They catalogued and described the fruits displayed at the club’s annual autumn shows along with those sent from elsewhere in the country by the most renowned nurseries of the day.

The text was illustrated with chromolithographs based on hundreds of exquisite watercolours by Alice Ellis and Dr Bull’s daughter, Edith. In addition to its merits as a treatise on the cultivation of apples and pears, and its engaging qualities as a compendium of historical and cultural facts and figures, The Herefordshire Pomona is, perhaps, first and foremost an important work of botanical art, and one of the loveliest printed books ever published in this country.

A Masterpiece of Chromolithography

In earlier times, most fine botanical books were illustrated with engraved plates or aquatints, which were then coloured by hand. This inevitably led to a great variation in colour and accuracy. However, from around 1818, colour had been introduced to the new technique of chromolithography, enabling fidelity of colour to the original fruit, and The Herefordshire Pomona was one of the first books to take advantage of this breakthrough. Invented in the late-18th century in Munich by Alois Senefelder, chromolithography had grown in importance and sophistication throughout the 19th century, with master practitioners working across Europe. For The Herefordshire Pomona the Woolhope Club chose the firm of Severeyns in Brussels, renowned specialists in the field of botanical and horticultural chromolithography.

A team of highly skilled artists (their apprenticeship would take at least seven years) separated out the original painting into hues, tones and textures, and painstakingly redrew all these layers onto a series of stones, all kept in register by a master keyline drawing. Each plate for The Herefordshire Pomona would have required eight or even ten stones to capture the subtle shades of the fruits and blossoms. Layers of colour were built up as the paper passed through the hand press time and again – one pass for each colour. The resulting depictions have an extraordinarily lifelike, three-dimensional quality, surpassing even the watercolours on which they were based.

Remarkably, the methods employed in The Folio Society edition can achieve an identical effect, displaying the same rich hues and glowing sheen, thanks to the most advanced modern printing technology.

The Herefordshire Pomona was originally bound with text and illustrations together. We have separated the two, enabling plates and commentary to be viewed side by side. The plates volume is quarter-bound in Indian goatskin with green canvas sides blocked in gold, and with a gilded top edge. Distinguished illustrator and long-time Folio associate Neil Packer has elegantly redrawn five apples to adorn the plates volume, and a beautiful pear for the text volume bound in canvas.

For the plates volume we have selected a heavy cream matt paper which maintains maximum fidelity to the original book. It provides an excellent printing surface, and forms a pleasing background, showing the lustrous illustrations on the 77 plates to full advantage. Each copy is numbered by hand.

The text volume has been elegantly reset in Bulmer – fittingly as the Reverend C. H. Bulmer was one of the contributors and cider is much referred to throughout. Each entry is illustrated with a detailed monochrome wood engraving showing the profile and internal form of a cut section of the fruit. In addition we have commissioned two introductory essays by leading experts. Michael Twyman, Emeritus Professor of Typography and Graphic Communication at the University of Reading and author of A History of Chromolithography, has written an illuminating piece on the plates of The Herefordshire Pomona while Jim Arbury, horticultural expert on fruit-growing at RHS Wisley, has contributed a fascinating account of Pomonas and pomology.

Both volumes, along with four delightful prints for framing, are presented in a canvas-bound solander box, blocked in gold with a design inspired by the original edition, and with a leather titling label on the spine.

An Erudite yet Captivating Text Every page of The Herefordshire Pomona is informed by the passion of its authors for promoting and preserving the rich diversity of apples and pears that formed a fast-disappearing part of their natural heritage – a complaint still resonant today. They give not only details of the shape, the size, the colour, the skin, the eye, provenance and growing proclivities of every fruit, but also its suitability for table, cooking or cider, and whether the cultivar should be stored or eaten immediately. Alongside the text the cross-sectional drawings are an invaluable guide to identification.

Opinionated, erudite and scientifically rigorous, the text is enlivened further with verses, quotations from Shakespeare and others, glorious anecdotes and historical notes. We learn that the price of Golden Pippins rocketed, and they became tremendously scarce, after being bought for a guinea a bushel for the Empress of Russia. But it was not only royalty who appreciated good fruit: Sam’s Crab, for instance, ‘is a prime favourite with all Herefordshire school children (no mean judges of a good Apple), and it is equally attractive to birds and insects, who revel in its sweetness.’

Until we read this book, few of us have even heard of the Jargonelle pear; here we are encouraged to speculate that it is the Pyrum Tarentinum referred to by Cato and the Numidianum Graecum of Pliny. Though not all are of such provenance, every time we bite one of these apples or pears, we are experiencing a taste and texture that has been unchanged for centuries. They form part of our living history and, every time a cultivar is lost, we are the poorer for it. Already there are 60 fruits in the Pomona not now included in the national fruit collections; and many others are also in danger of extinction. 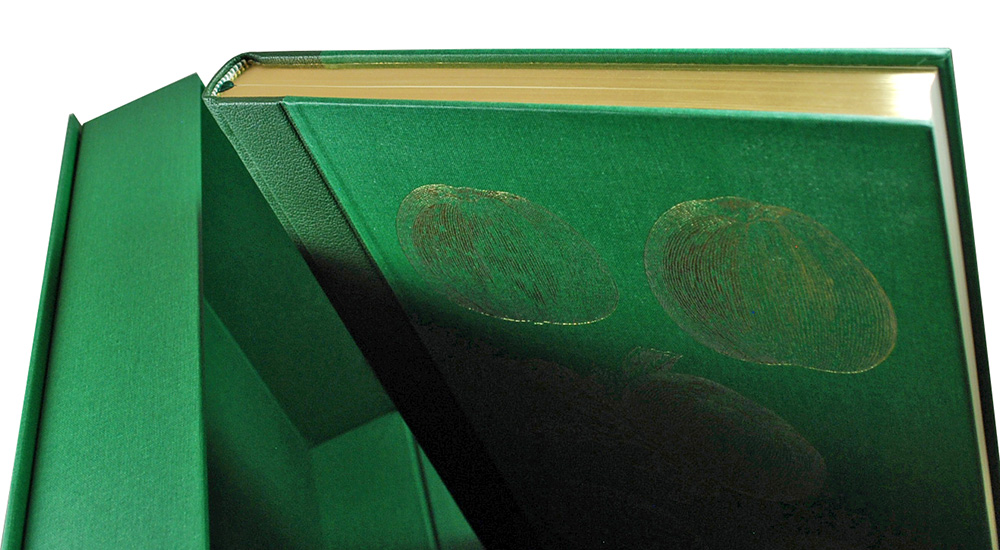 eautifully crafted, imaginative editions of the world’s great works of fiction and non-fiction, Folio Society books offer a rich literary experience to readers of all ages. The books we select for publication are timeless – we know they will be enjoyed and appreciated now and in the future. Because each book is considered as an individual object of value in its own right, there is a variety to our aesthetic – the only uniformity is in the quality of every single book.

VERY FINE GUARANTEED for the two volumes and four plates. The condition is of the highest quality. Unread. Free of markings, writings, or stamps. No bookplates attached or indication of any removed. No bumped corners. A wonderful bright clean copy that is unread with a square and tight spine. Tray-case in Near Fine+ condition with small bump to one corner.

Personally signed by Harper Lee directly onto the special limitation page. This is the very low number 53 of only 500 produced in this special edition. Harper Lee's landmark #1 New York Times...