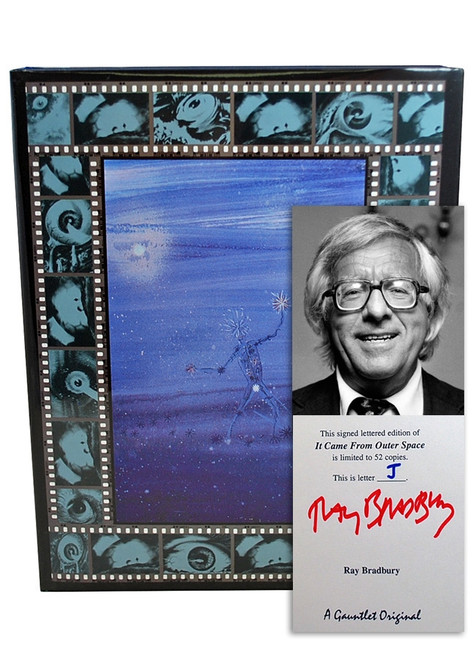 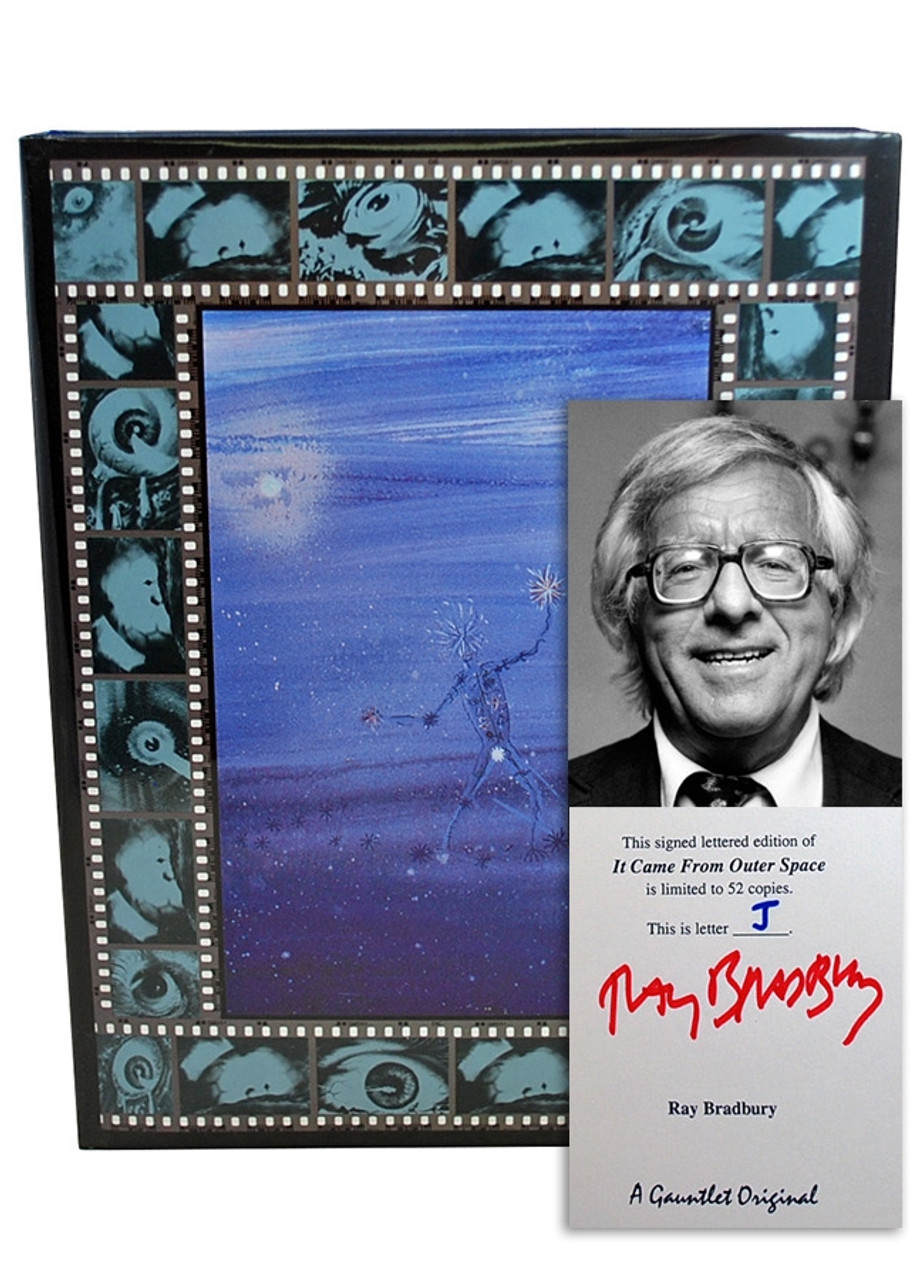 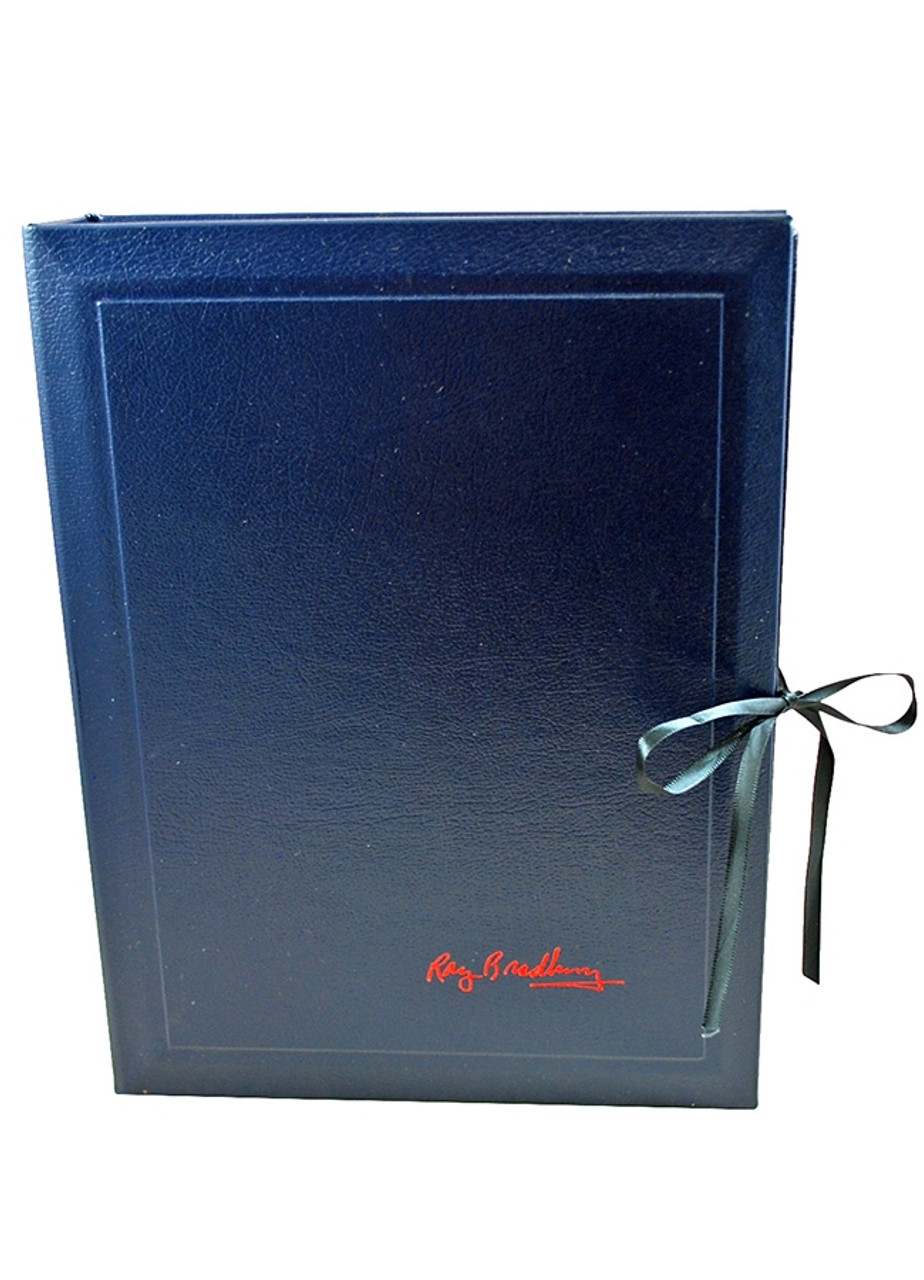 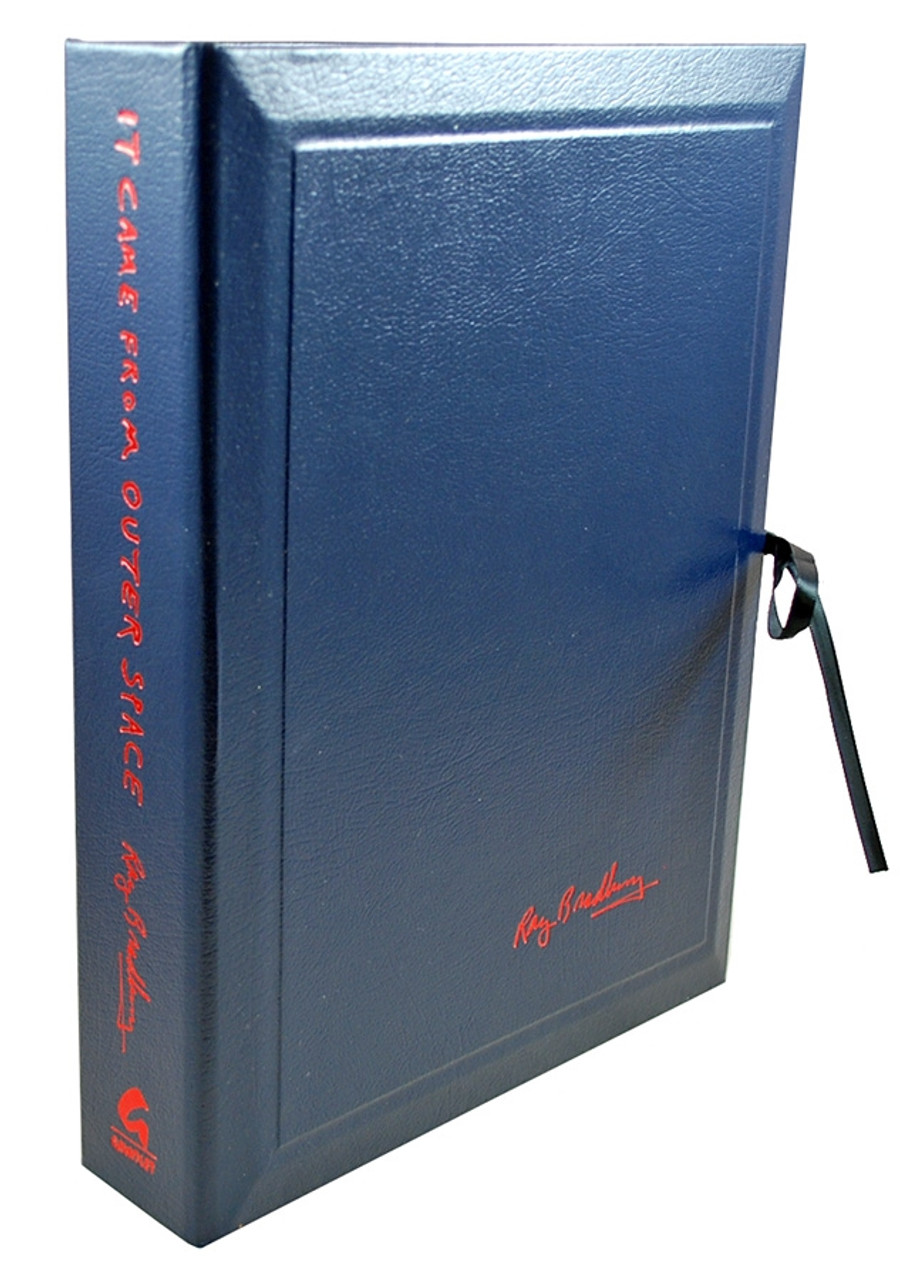 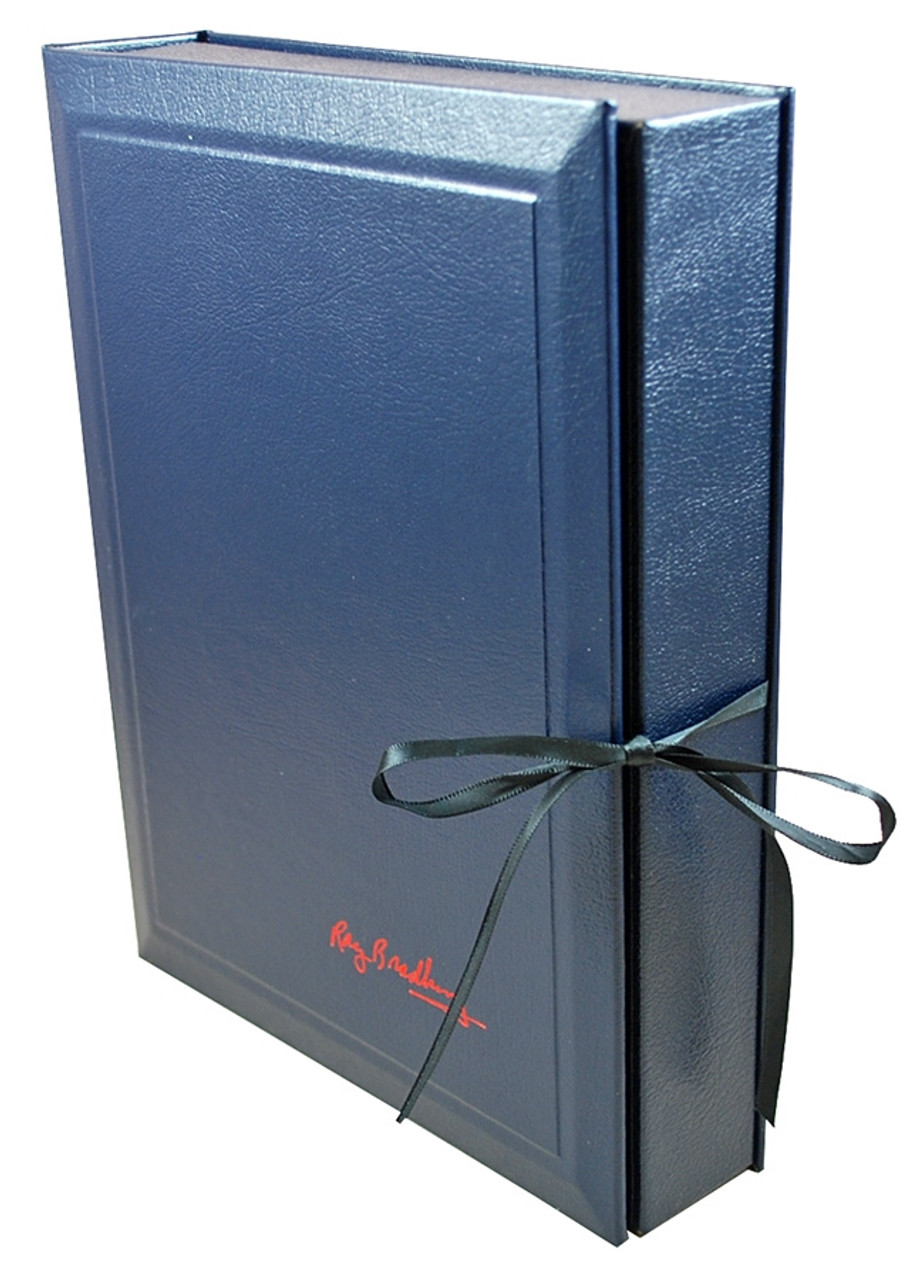 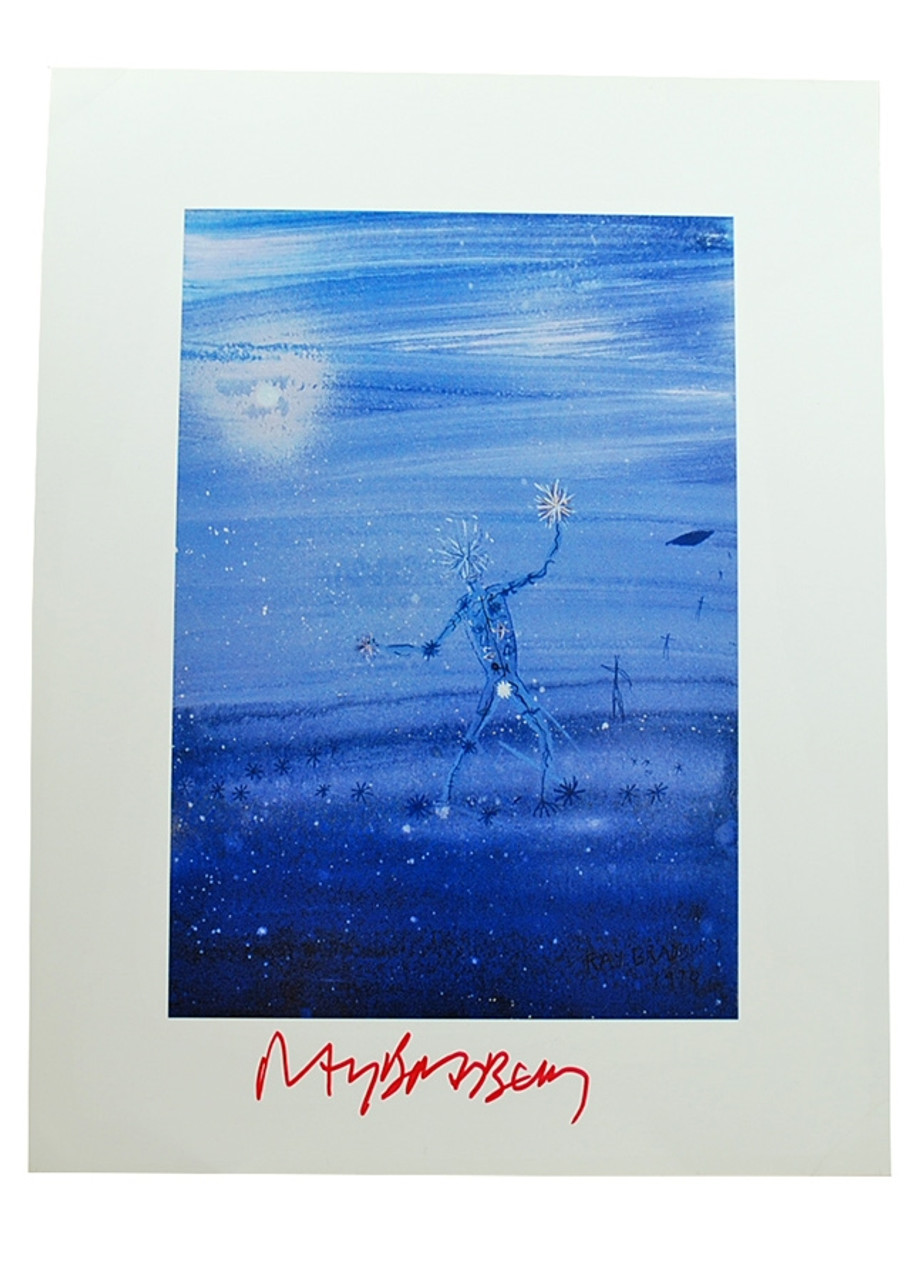 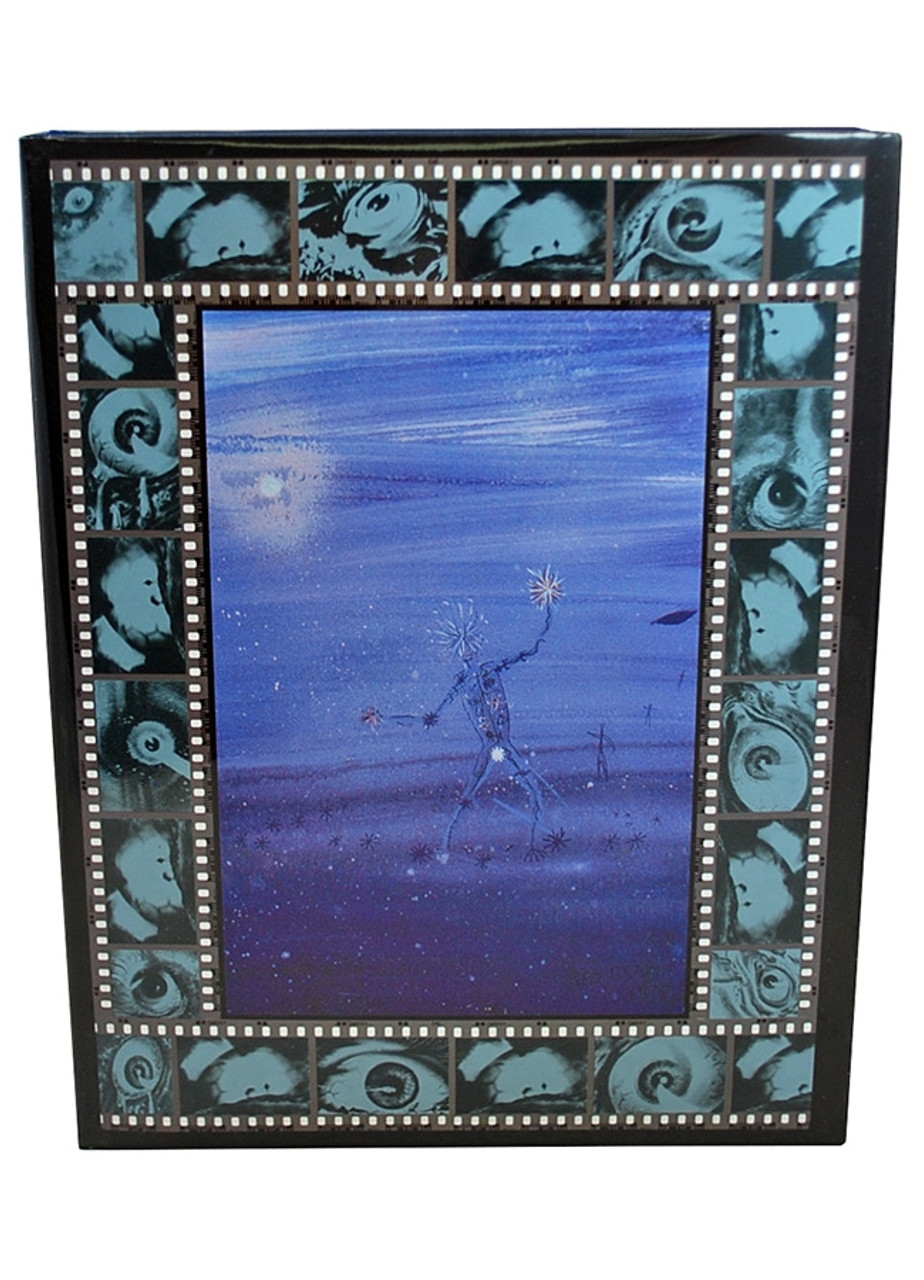 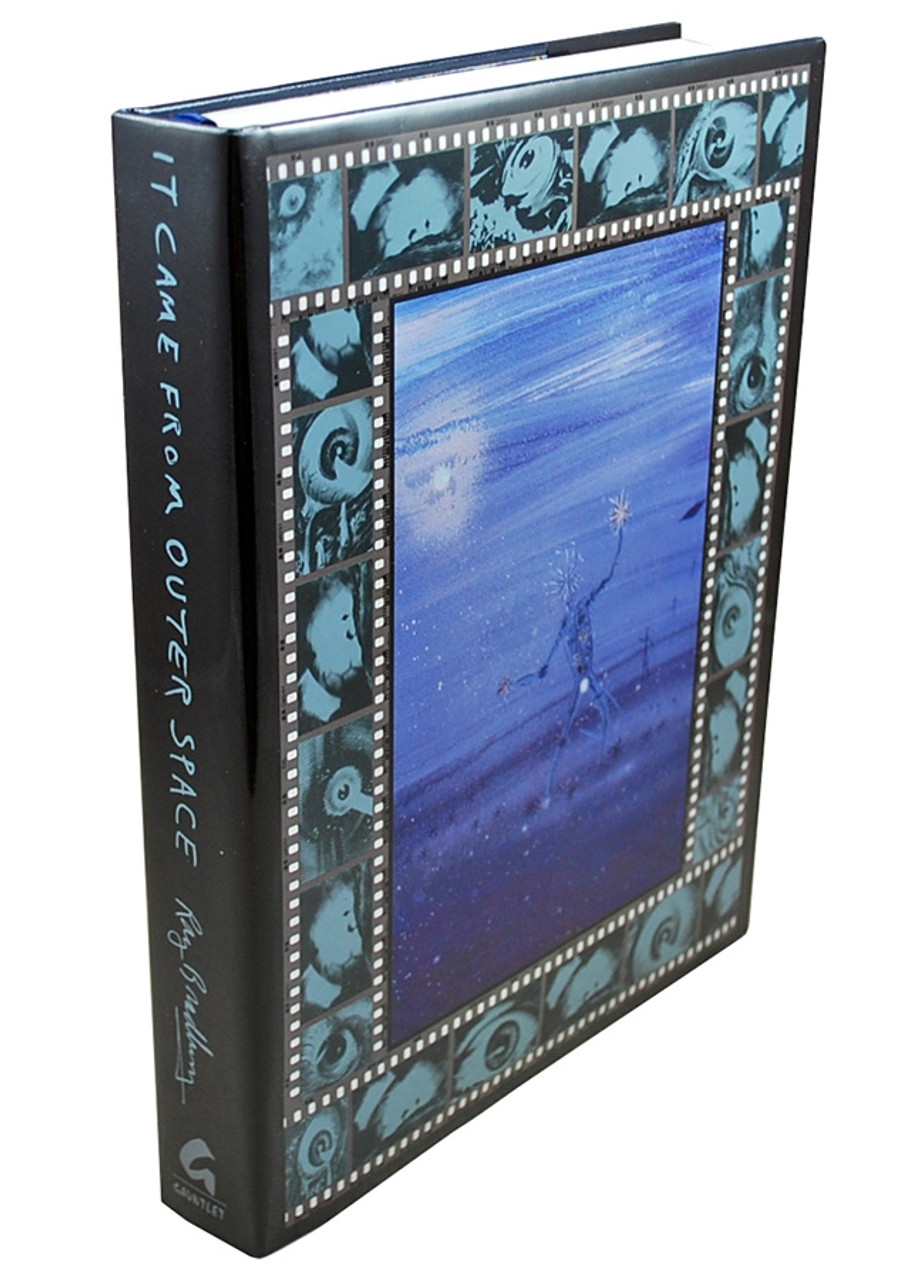 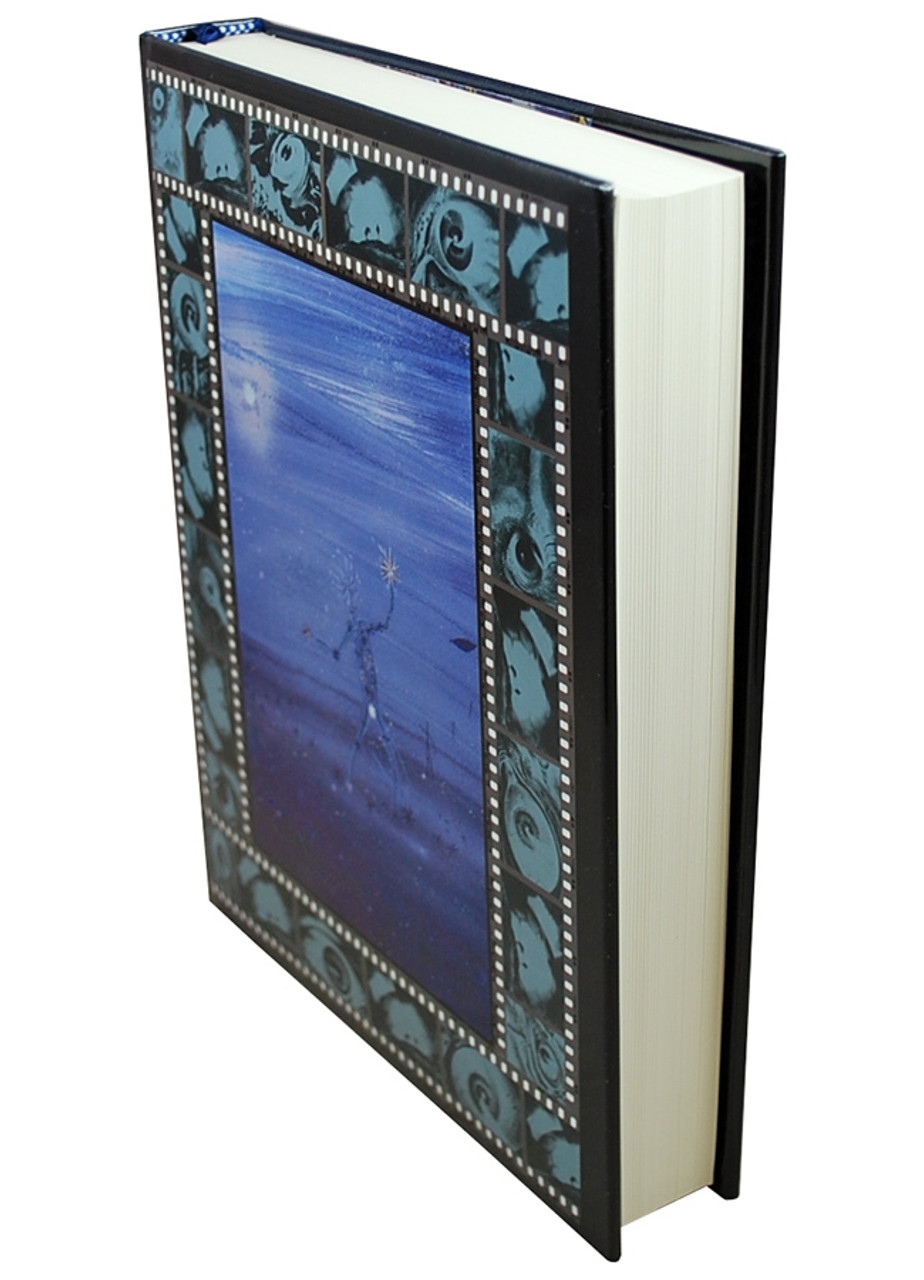 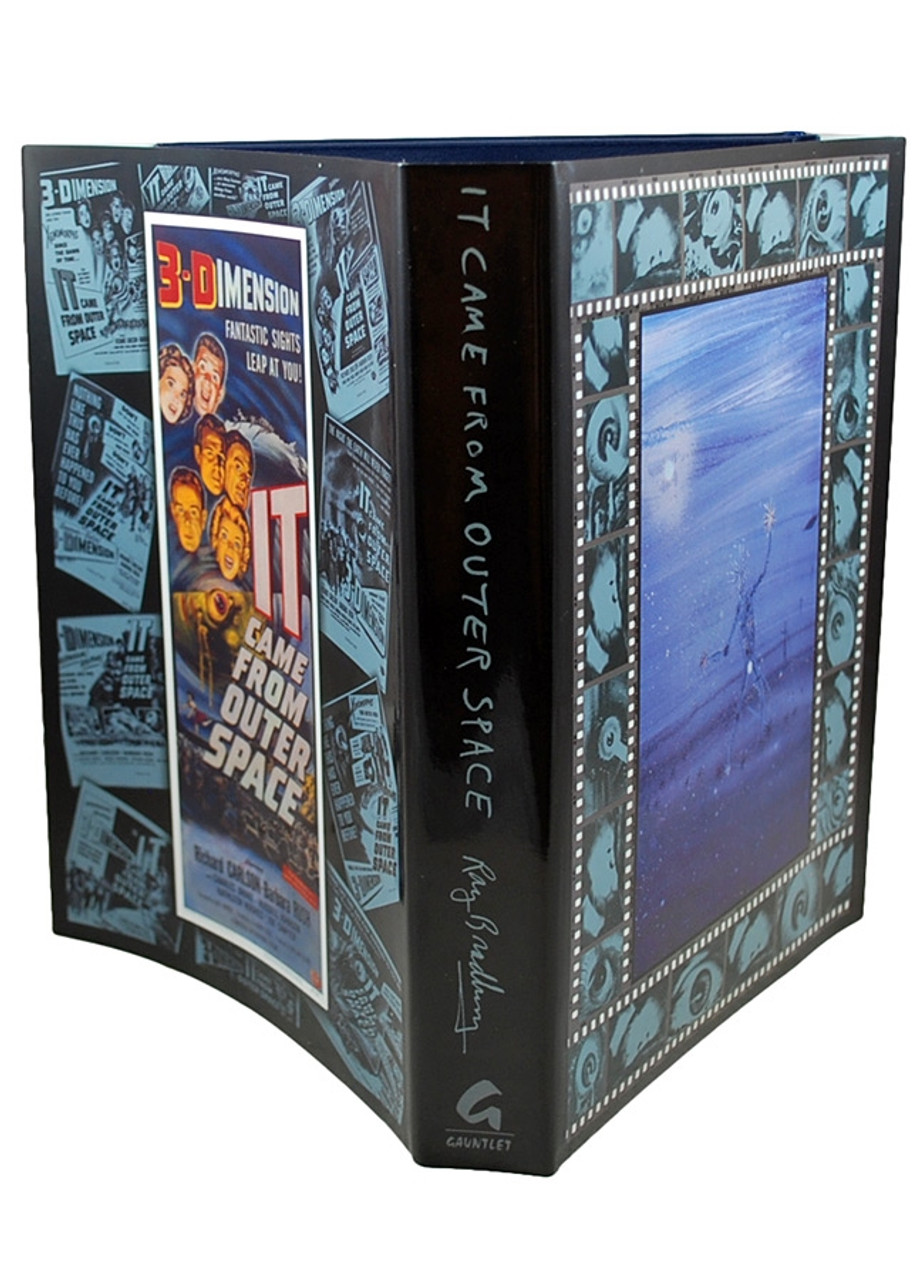 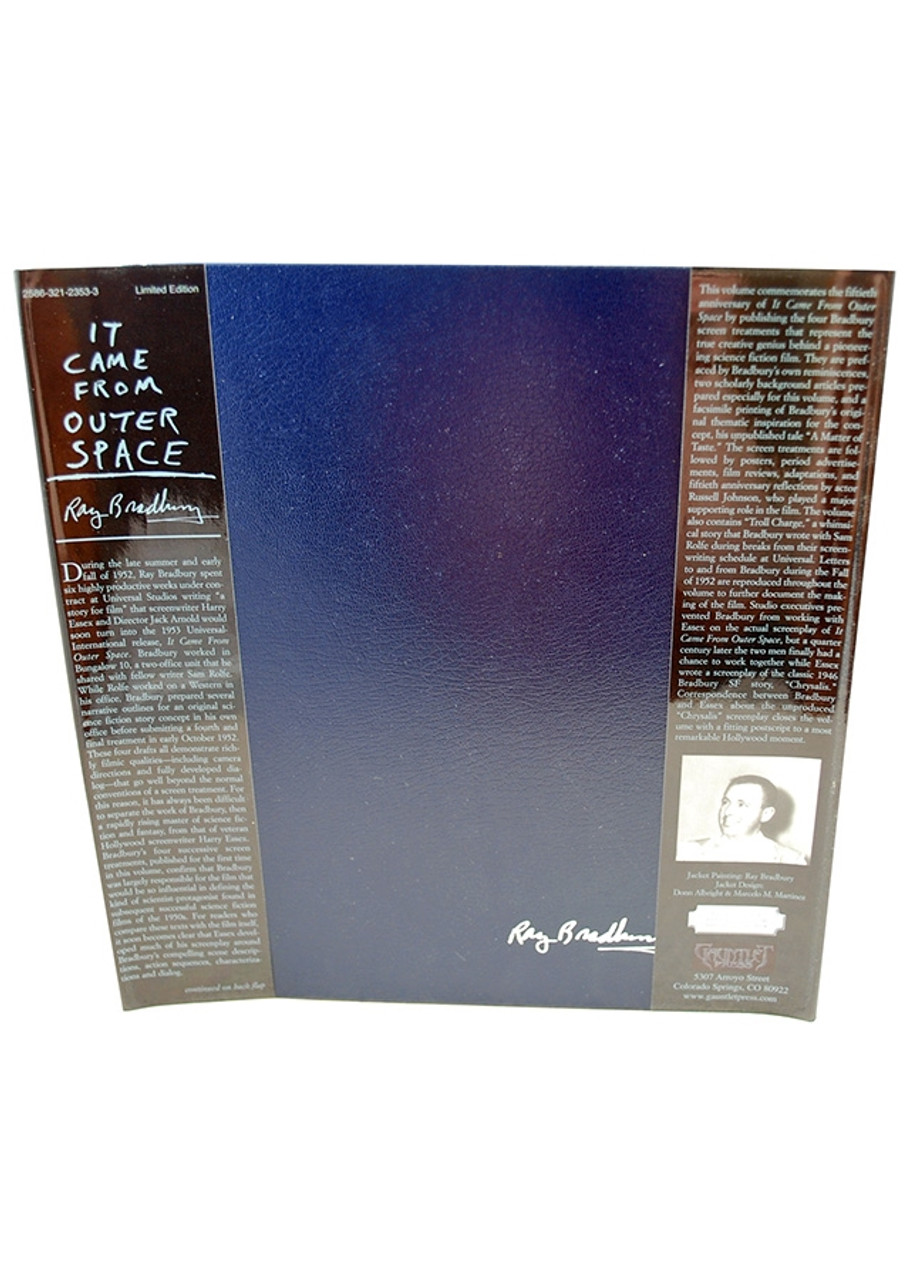 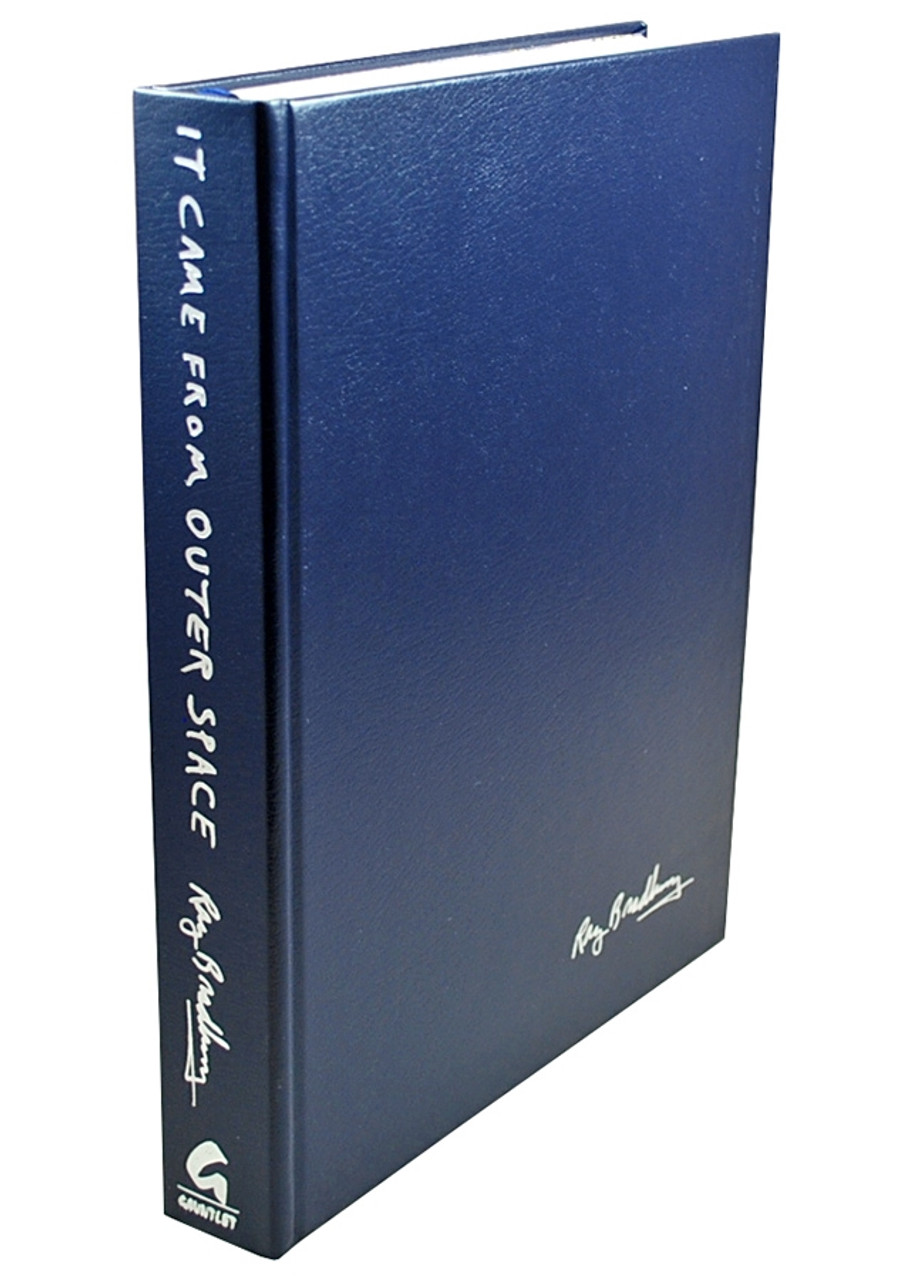 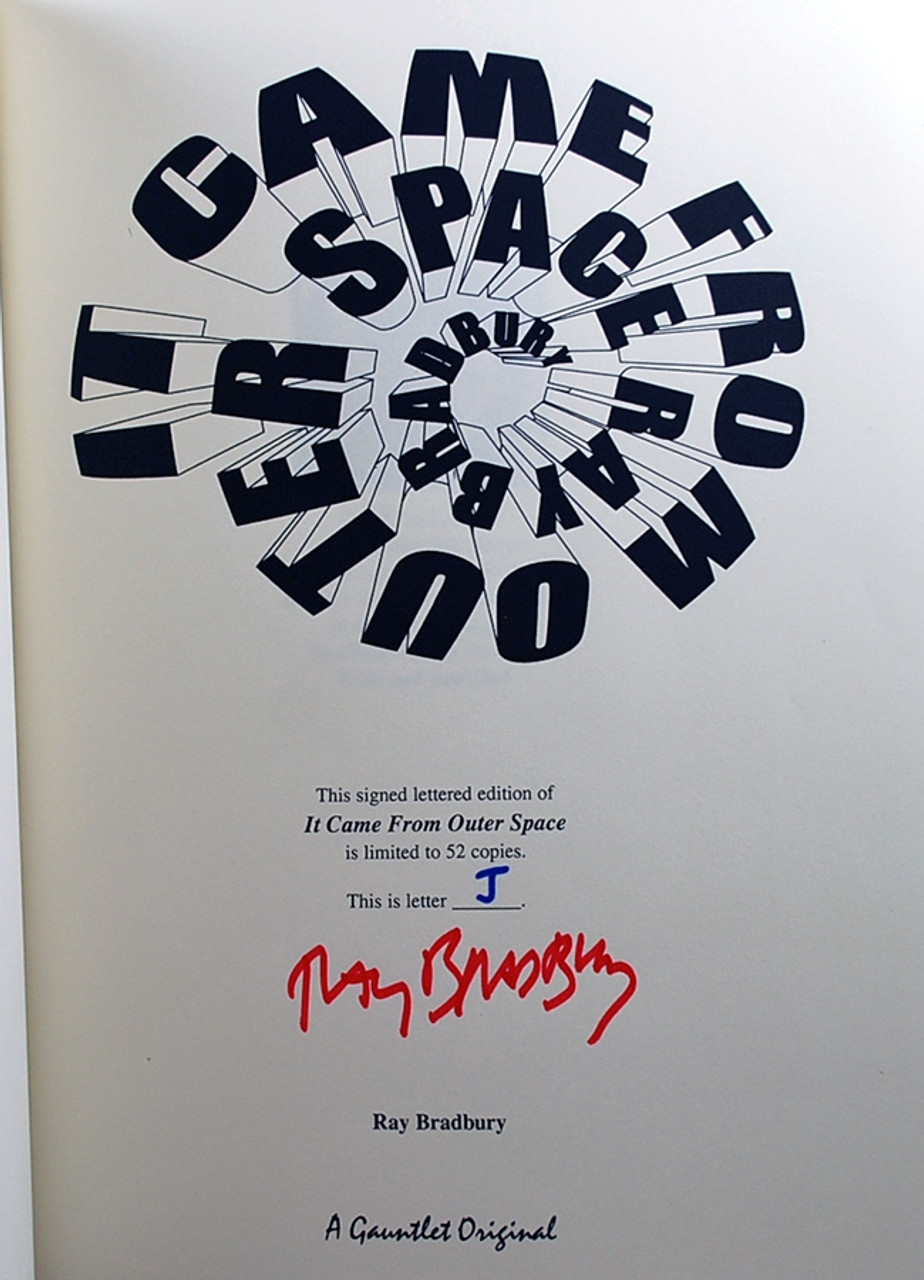 Gauntlet Press. Colorado Springs 2003. Ray Bradbury "It Came From Outer Space". Signed lettered edition "J" of only 52 produced. Includes two signed prints. Enclosed in a special tray case which contains a special print also signed by Ray Bradbury mounted inside. This book prints for the first time Bradbury's original film story, treatments, and script. The book contains photographs, an interview on the film with Bradbury plus additional essays and historical information. A large oversized coffee table book reproducing Bradbury's original manuscripts at full size. Bound in full silver stamped cloth with a dust jacket illustrated with an original color painting of an alien painted by Bradbury. Enclosed in the publisher's matching slipcase also with Bradbury's painting on the front cover. Not all copies received this slipcase. Released in 1953, It Came From Outer Space was one of the first 3-D films made. Rumors about Bradbury's participation with the film have run rampant for years. Bradbury did not write the final screenplay - good news, actually, as Bradbury retained their rights - but he wrote four treatments and gets story credit. These screen treatments have never been published before.

Donn Albright edited It Came From Outer Space. He has done a fantastic job in pulling together the original Bradbury typed pages of the outlines and treatments, gathering more bonus material than ever imagined possible, and convincing Bradbury to allow the publisher to use never before published short stories in this book.

The Gauntlet edition of It Came From Outer Space is more than just a printing of the outlines and treatments which Bradbury wrote for the film. It is an in-depth study of the evolution of the film, filled with photos, original ads, marketing posters, reviews, letters, never before published Bradbury short stories, and insightful essays and introductions from Bradbury Scholars Jon Eller and Bill Touponce.

From Publishers Weekly
Bradbury buffs who can afford the high ticket price will welcome this trove of materials, most previously unpublished, related to the classic 3-D film, It Came from Outer Space (1953). This hefty compendium includes four Bradbury screenplay treatments, scholarly essays, studio letters, posters, ads, reviews and more -- everything except the 3-D glasses. Readers will enjoy following the evolution of the script, which at first had a human spaceship visiting a distant planet rather than an alien ship crashing on Earth. Ironically, the final screenplay was written by Harry Essex, and Bradbury received credit only for the original story. The book's last item is a brief, unproduced screenplay Essex wrote based on Bradbury's story "The Chrysalis." Editor Albright deserves all due credit for thoroughness.
Copyright Reed Business Information, a division of Reed Elsevier Inc. All rights reserved. 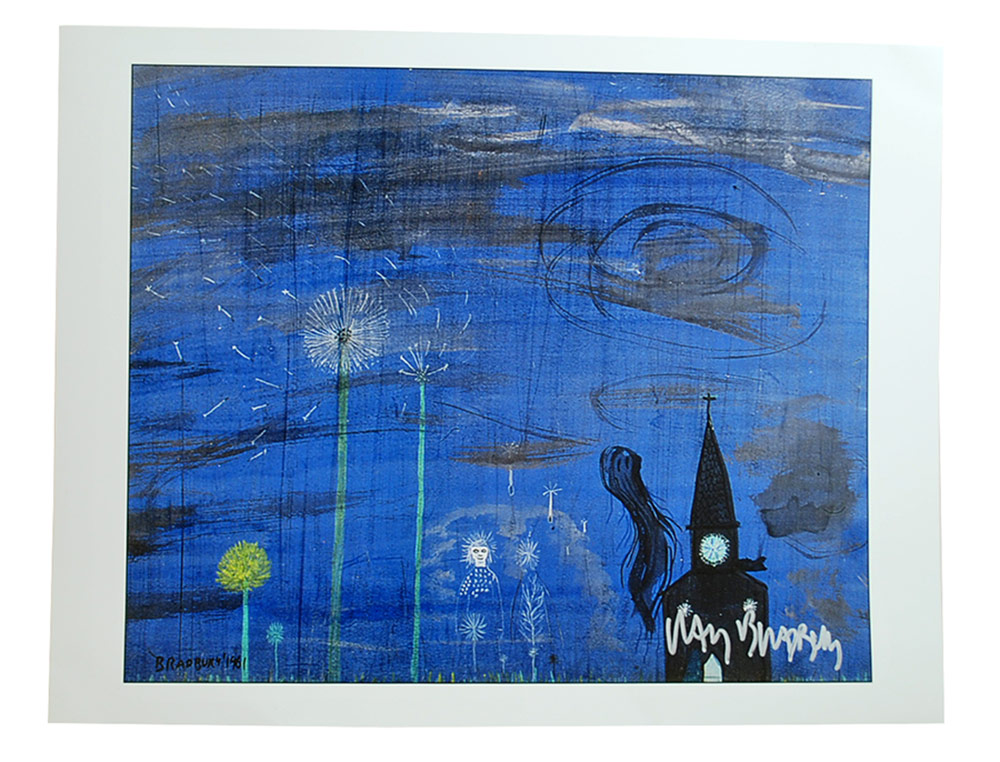 Lettered signed limited edition, lettered "J" of 52 in slipcase.
VERY FINE GUARANTEED. A wonderful bright clean copy free of any markings, writings, or stamps. Sharp corners that have not been bumped. Unread book with square and tight binding. No bookplates attached or indication of any removed. Edges are free of any marks, spots, scratches, or blemishes.

Personally signed by Ray Bradbury and Allois. Signed Lettered Edition "M" of only 52. A beautiful book with fantastic color illustrations by Allois. The bright colorful dust-jacket is in new...