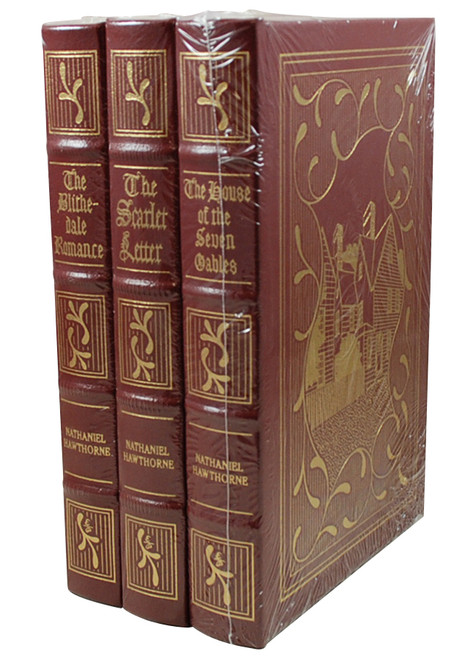 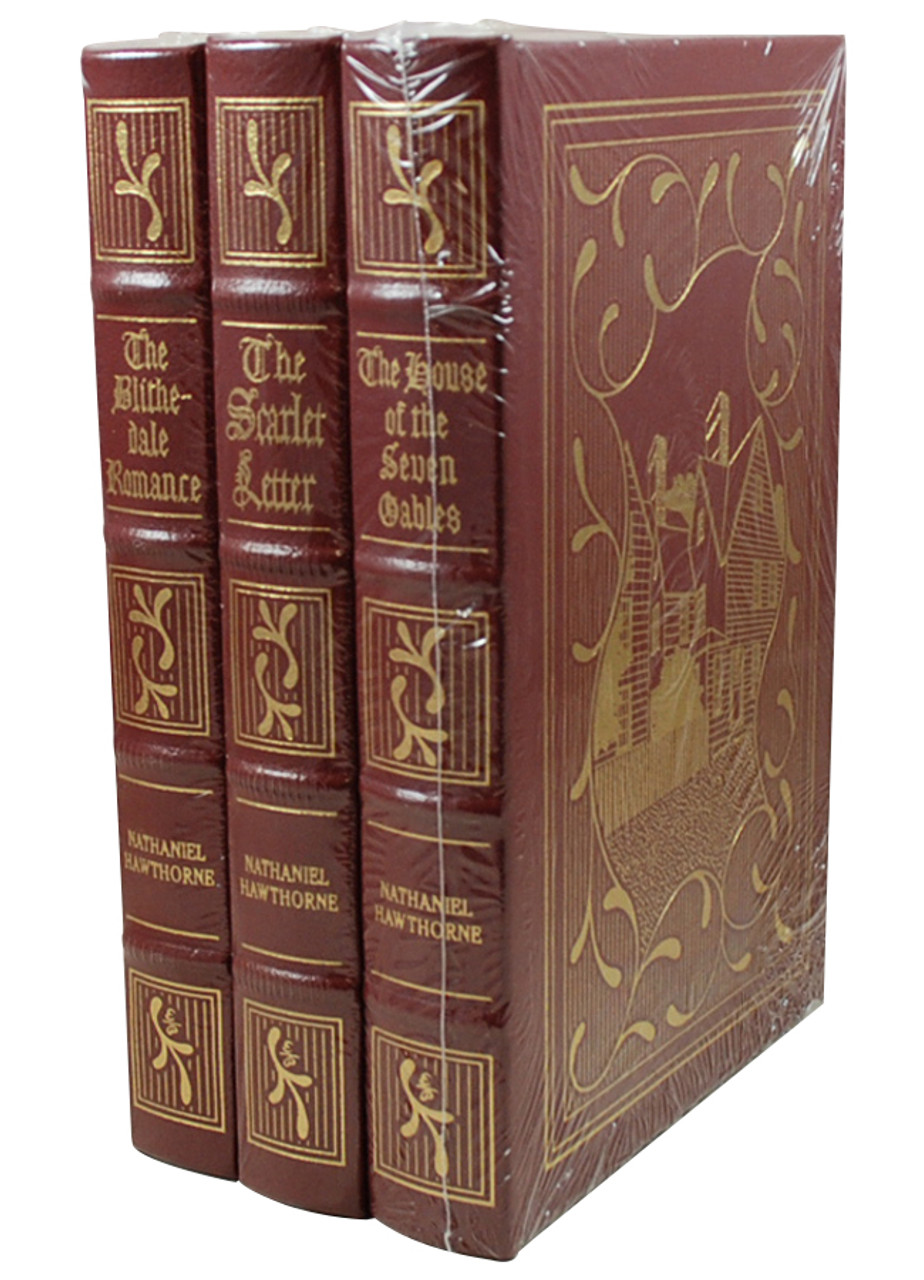 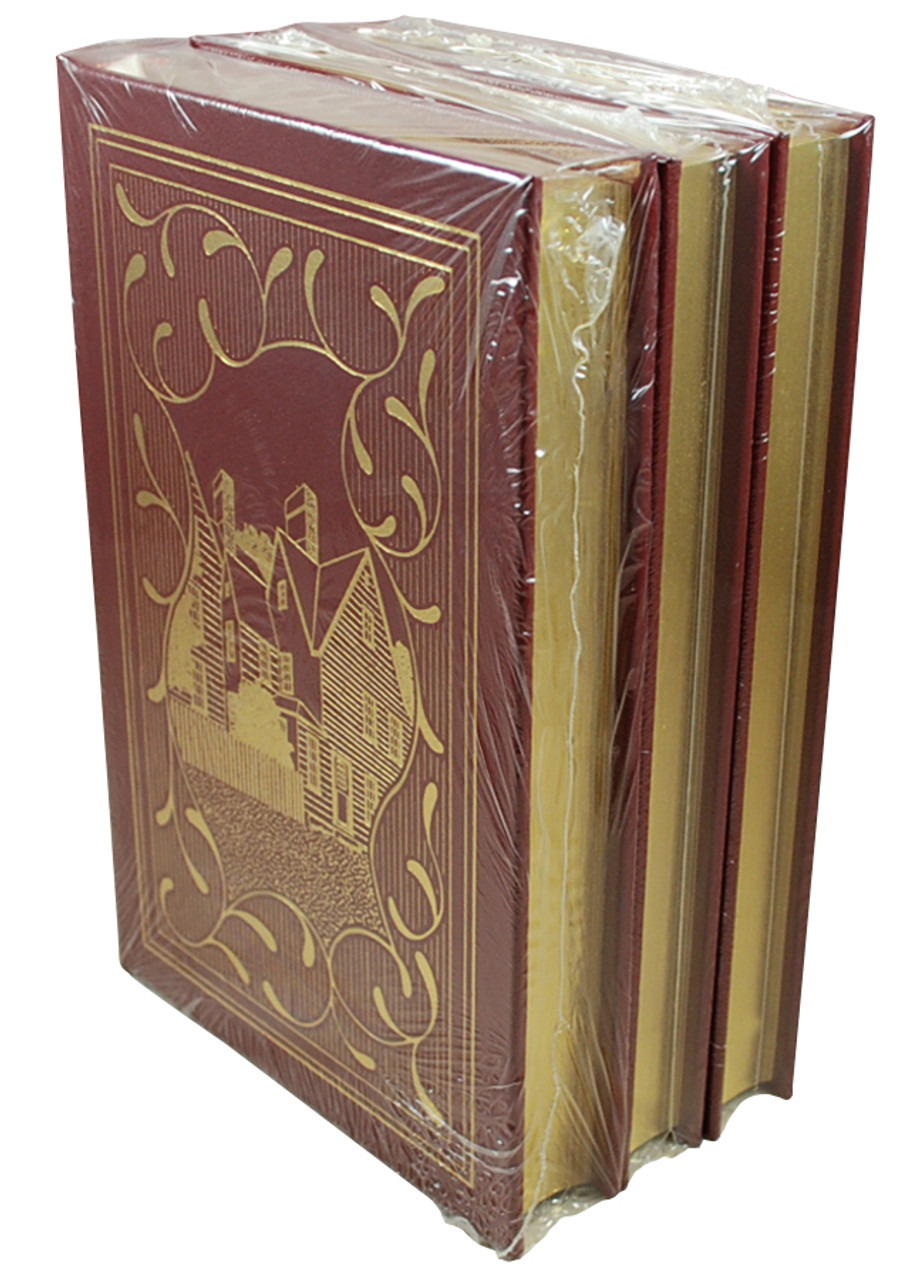 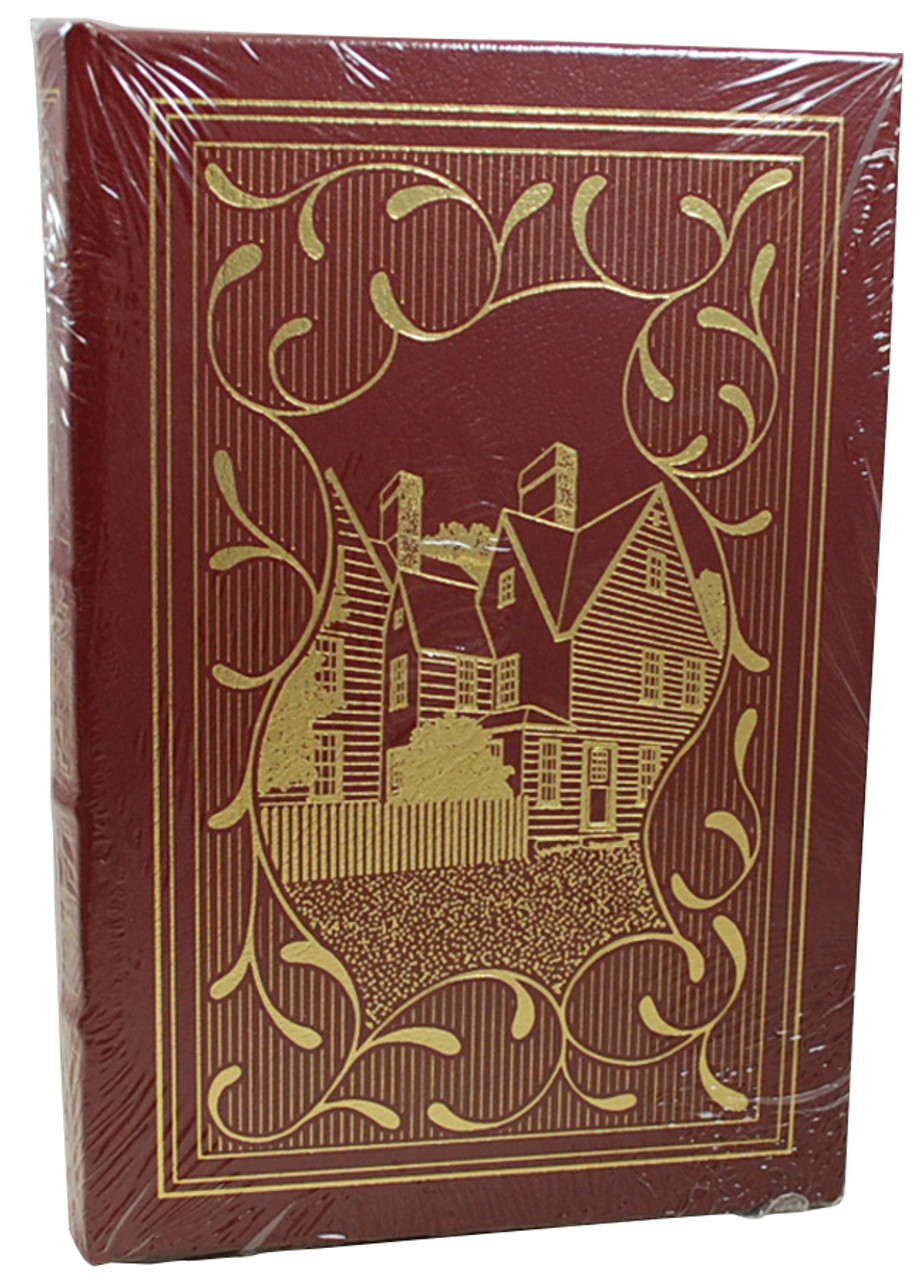 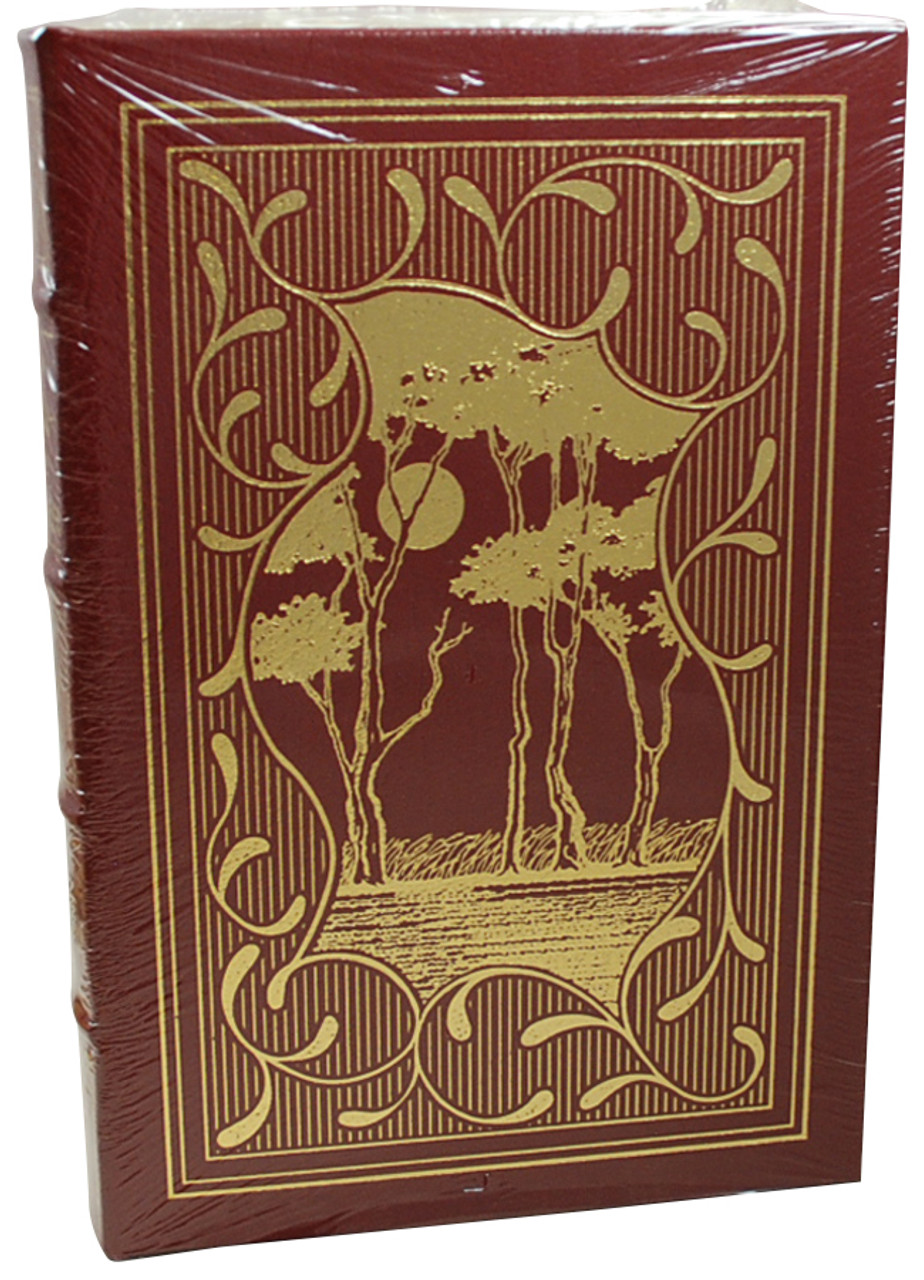 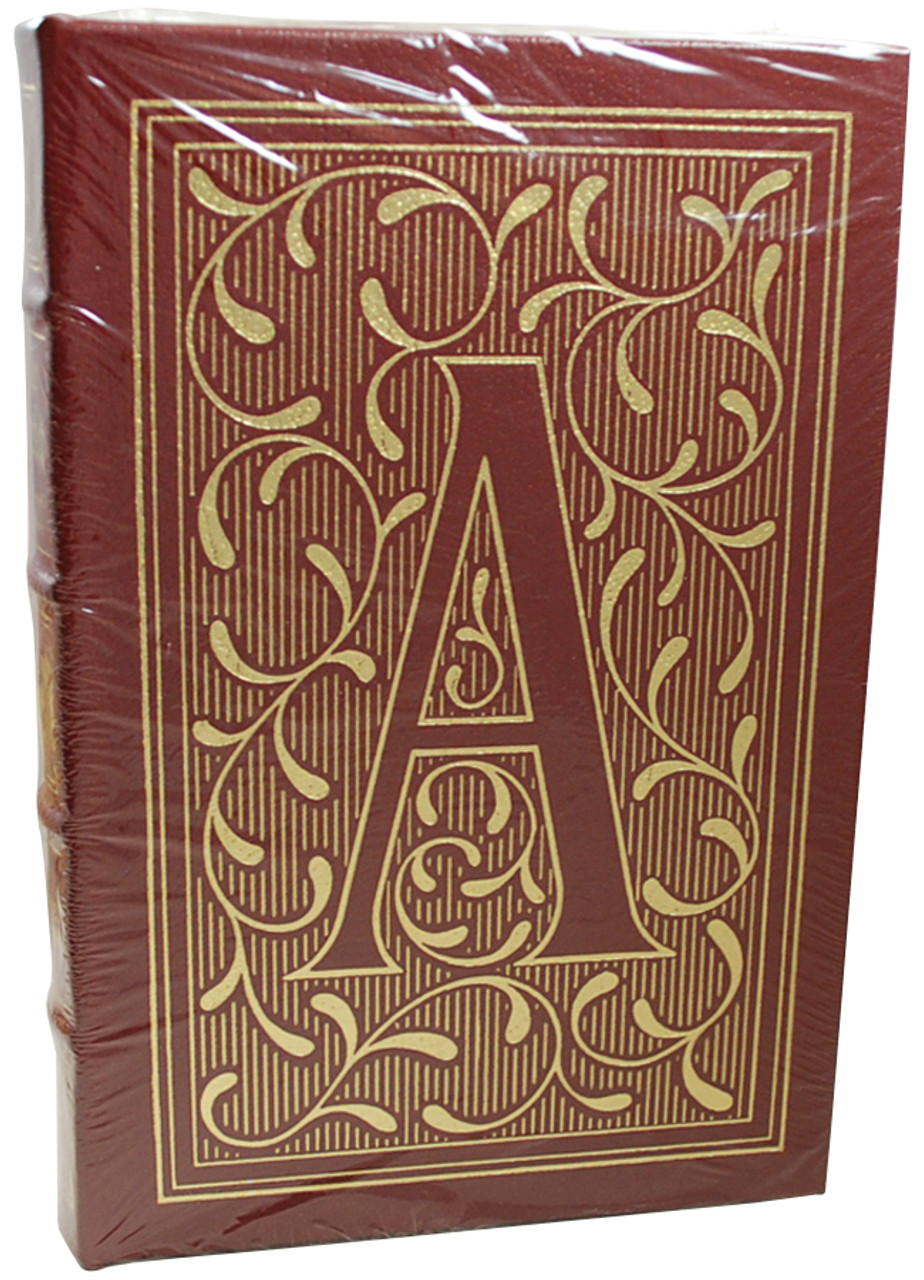 Easton Press, Norwalk CT. "Nathaniel Hawthorne Masterpieces" Limited Edition collector's set in three matching volumes.  Each volume has been luxuriously bound in full genuine leather. This set includes "The Scarlet Letter", "The House of The Seven Gables", and "The Blithedale Romance" . As new, sealed without any flaws.

The Scarlet Letter: A Romance is a work of historical fiction by American author Nathaniel Hawthorne, published in 1850. Set in Puritan Massachusetts Bay Colony during the years 1642 to 1649, the novel tells the story of Hester Prynne, who conceives a daughter through an affair and then struggles to create a new life of repentance and dignity. Containing a number of religious and historic allusions, the book explores themes of legalism, sin, and guilt.

The Scarlet Letter was one of the first mass-produced books in America. It was popular when first published[2] and is considered a classic work today. It inspired numerous film, television, and stage adaptations. Critics have described it as a masterwork and novelist D. H. Lawrence called it a "perfect work of the American imagination".

The House of The Seven Gables

The House of the Seven Gables: A Romance is a Gothic novel written beginning in mid-1850 by American author Nathaniel Hawthorne and published in April 1851 by Ticknor and Fields of Boston. The novel follows a New England family and their ancestral home. In the book, Hawthorne explores themes of guilt, retribution, and atonement, and colors the tale with suggestions of the supernatural and witchcraft. The setting for the book was inspired by the Turner-Ingersoll Mansion, a gabled house in Salem, Massachusetts, belonging to Hawthorne's cousin Susanna Ingersoll, as well as ancestors of Hawthorne who had played a part in the Salem Witch Trials of 1692. The book was well received upon publication and later had a strong influence on the work of H. P. Lovecraft. The House of the Seven Gables has been adapted several times to film and television.

The Blithedale Romance (1852) is Nathaniel Hawthorne's third major romance. Its setting is a utopian farming commune based on Brook Farm, of which Hawthorne was a founding member and where he lived in 1841. The novel dramatizes the conflict between the commune's ideals and the members' private desires and romantic rivalries. In Hawthorne (1879), Henry James called it "the lightest, the brightest, the liveliest" of Hawthorne's "unhumorous fictions," while literary critic Richard Brodhead has described it as "the darkest of Hawthorne's novels."

Nathaniel Hawthorne (July 4, 1804 – May 19, 1864) was an American novelist, dark romantic, and short story writer. His works often focus on history, morality, and religion.

He was born in 1804 in Salem, Massachusetts, to Nathaniel Hathorne and the former Elizabeth Clarke Manning. His ancestors include John Hathorne, the only judge from the Salem witch trials who never repented his involvement. He entered Bowdoin College in 1821, was elected to Phi Beta Kappa in 1824, and graduated in 1825. He published his first work in 1828, the novel Fanshawe; he later tried to suppress it, feeling that it was not equal to the standard of his later work. He published several short stories in periodicals, which he collected in 1837 as Twice-Told Tales. The next year, he became engaged to Sophia Peabody. He worked at the Boston Custom House and joined Brook Farm, a transcendentalist community, before marrying Peabody in 1842. The couple moved to The Old Manse in Concord, Massachusetts, later moving to Salem, the Berkshires, then to The Wayside in Concord. The Scarlet Letter was published in 1850, followed by a succession of other novels. A political appointment as consul took Hawthorne and family to Europe before their return to Concord in 1860. Hawthorne died on May 19, 1864, and was survived by his wife and their three children.

Much of Hawthorne's writing centers on New England, many works featuring moral metaphors with an anti-Puritan inspiration. His fiction works are considered part of the Romantic movement and, more specifically, dark romanticism. His themes often center on the inherent evil and sin of humanity, and his works often have moral messages and deep psychological complexity. His published works include novels, short stories, and a biography of his college friend Franklin Pierce, the 14th President of the United States.

Very Fine Guaranteed. Sealed. Each volume is a wonderful bright clean copy with a square and tight spine. Sharp corners that are not bumped. No bookplates attached or indication of any removed and without any marks, writings or stamps. No scratches, marks, or blemishes to gilded page edges. Photos of actual set.