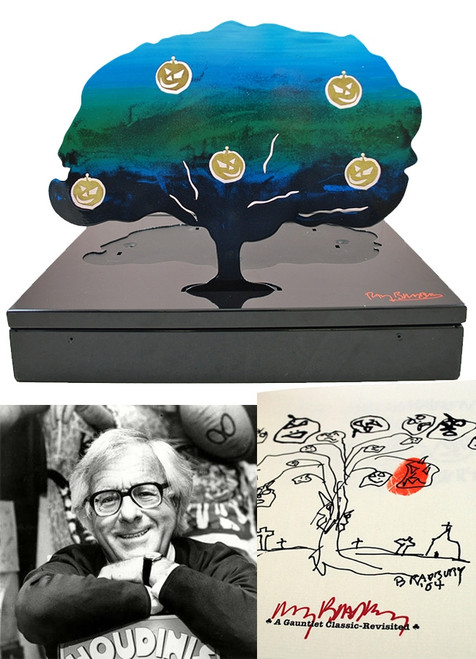 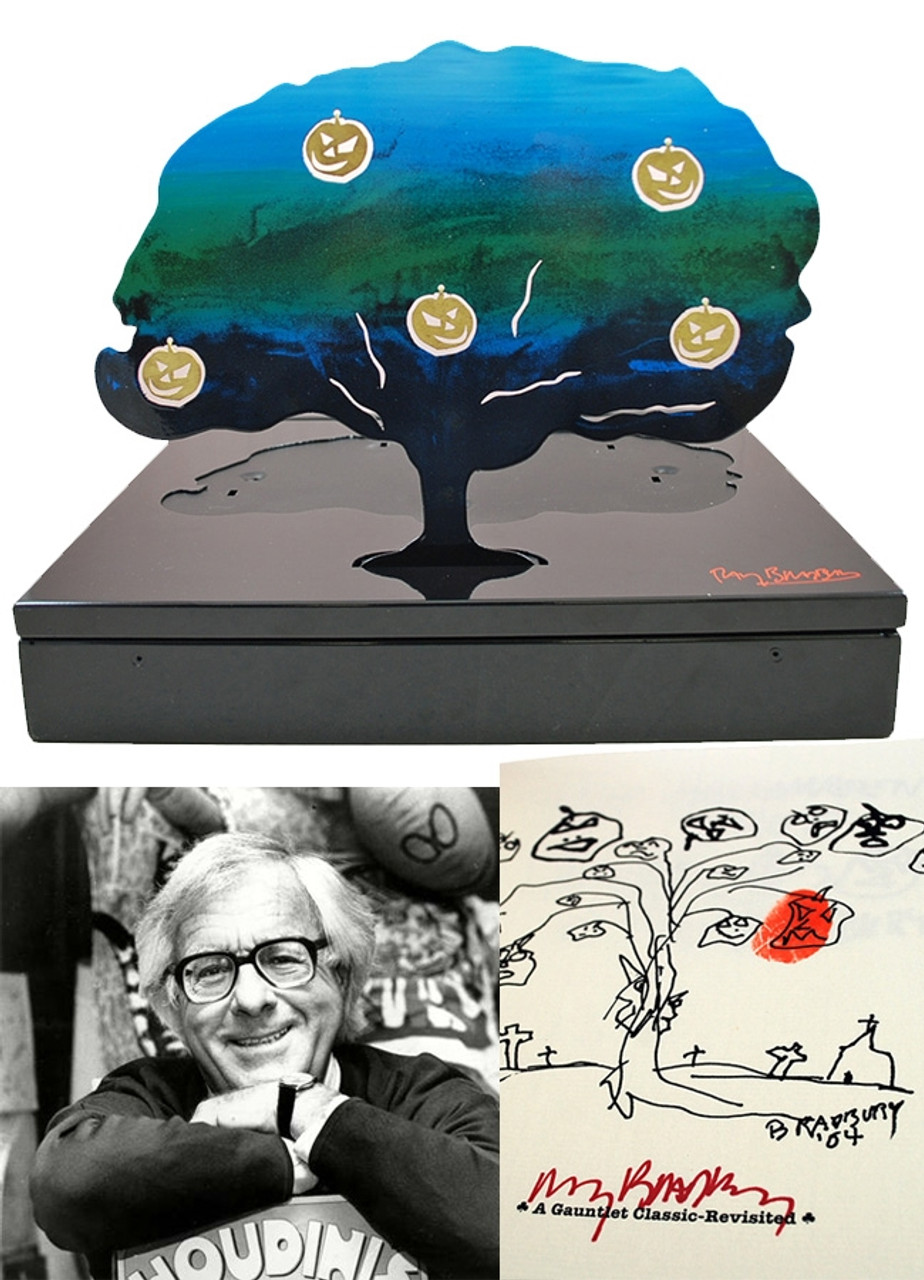 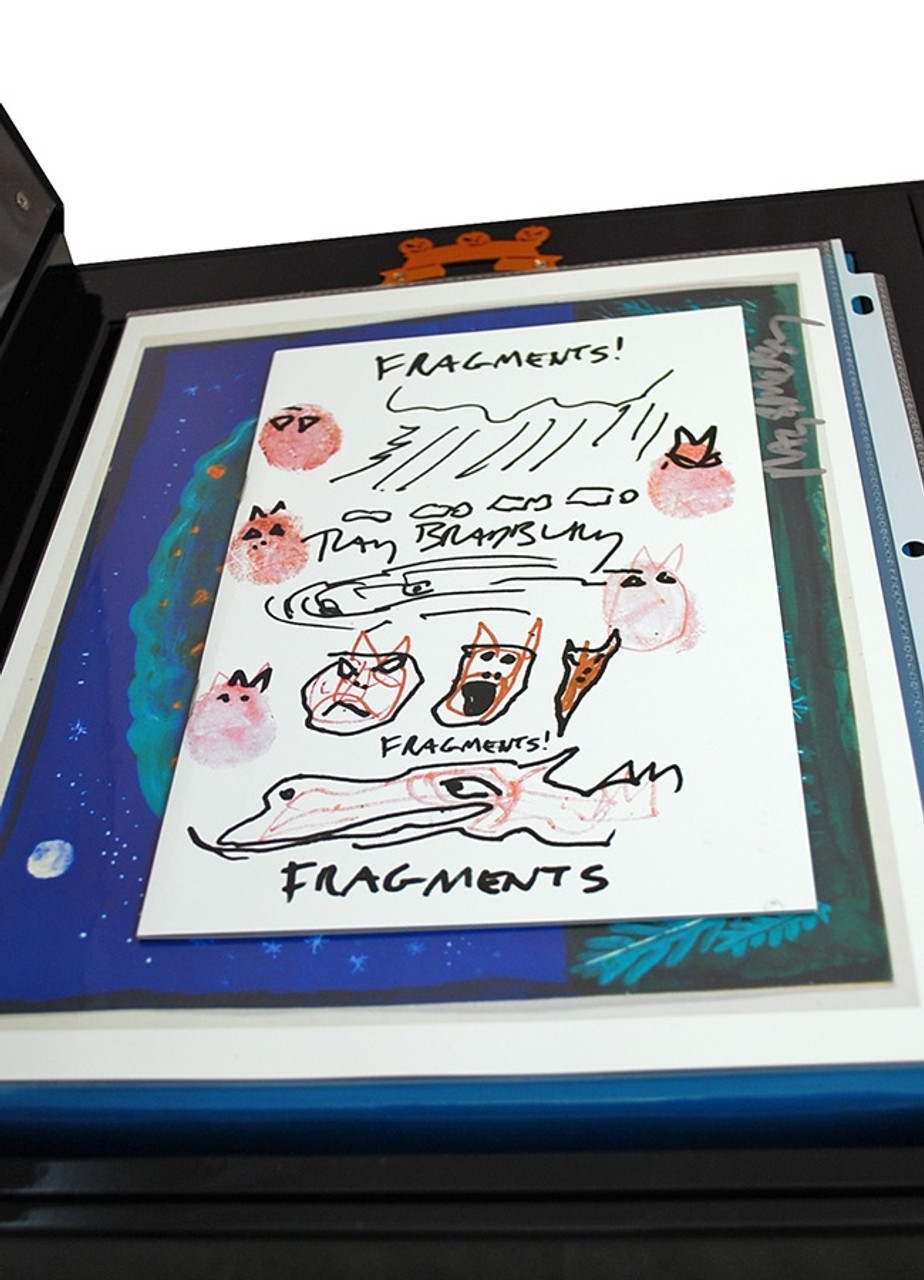 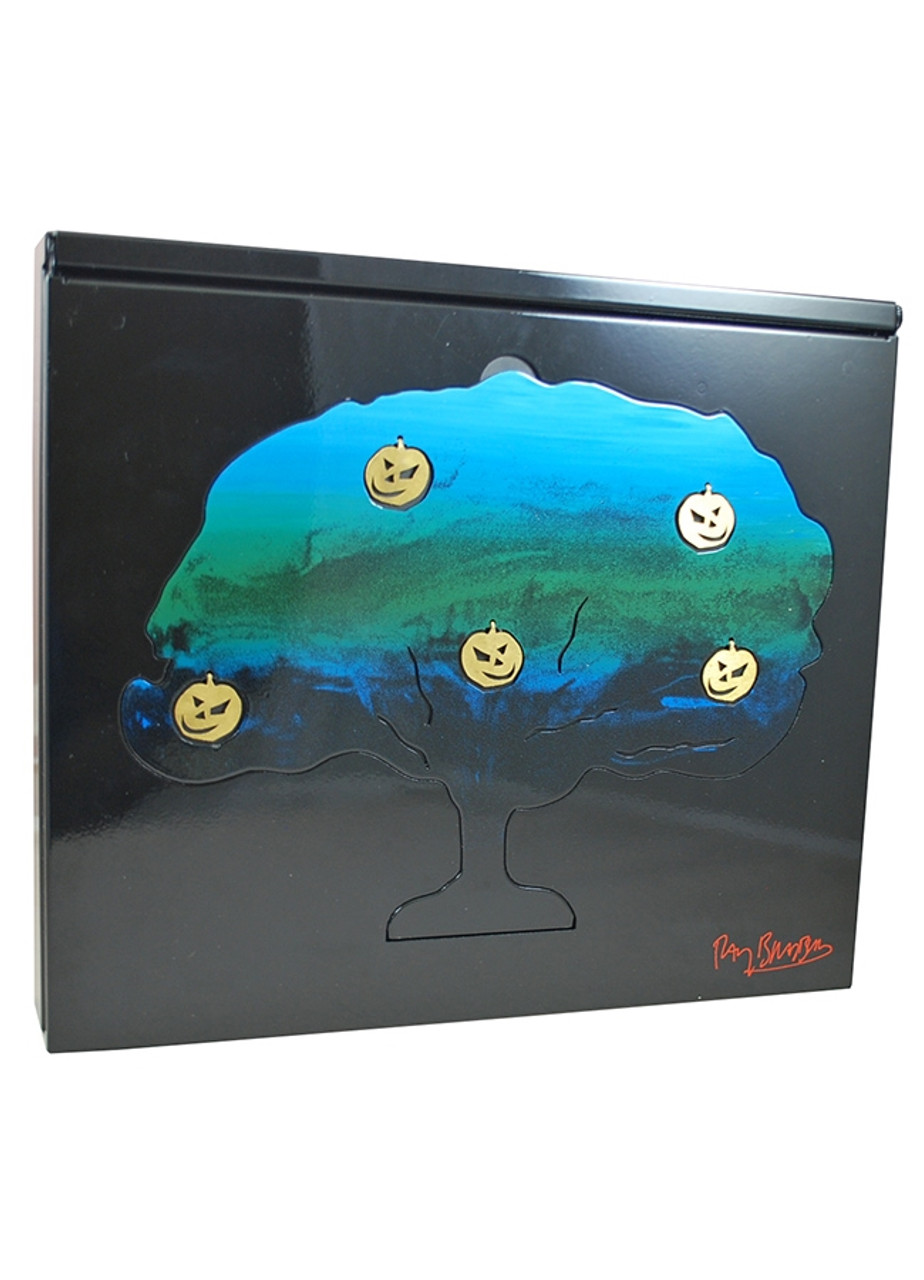 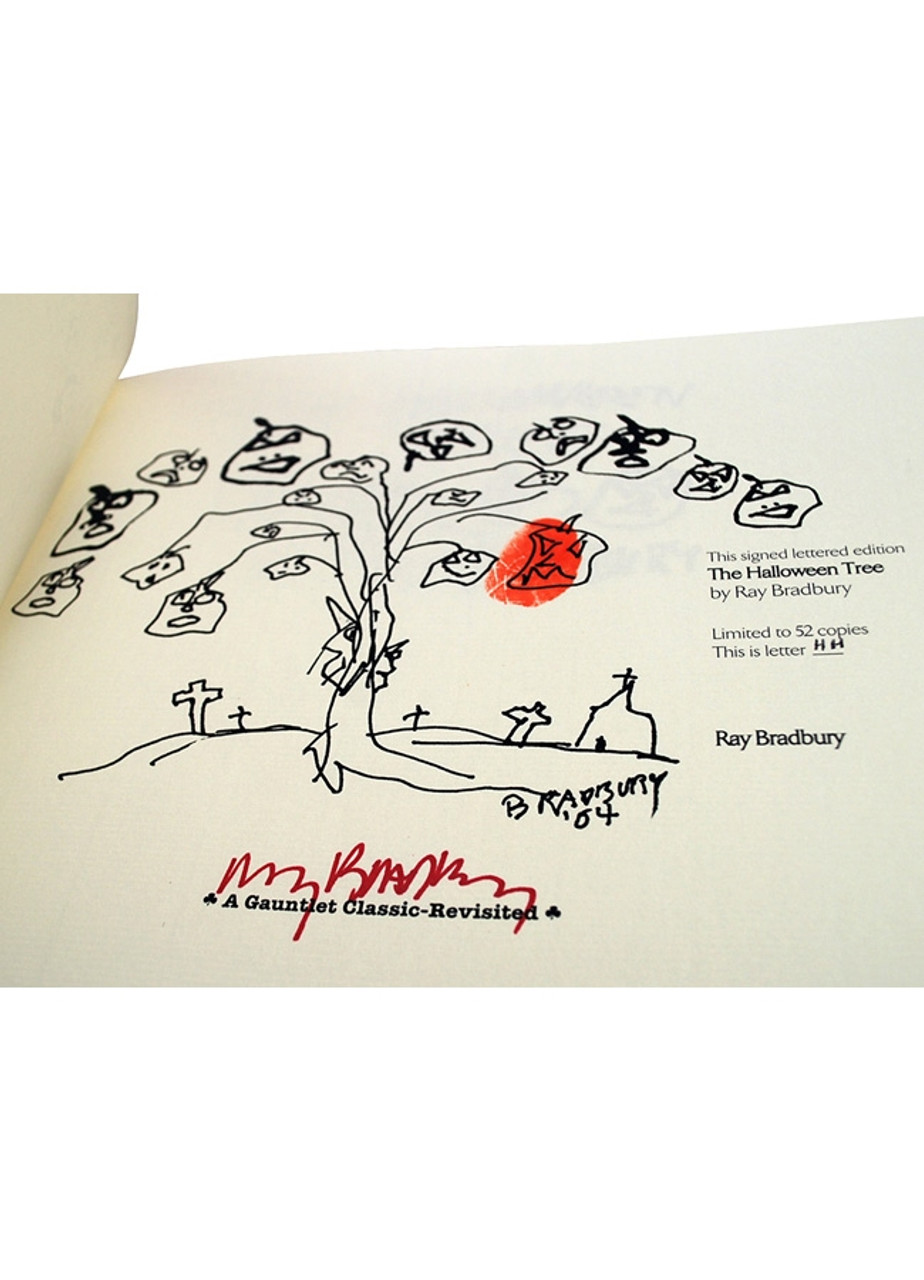 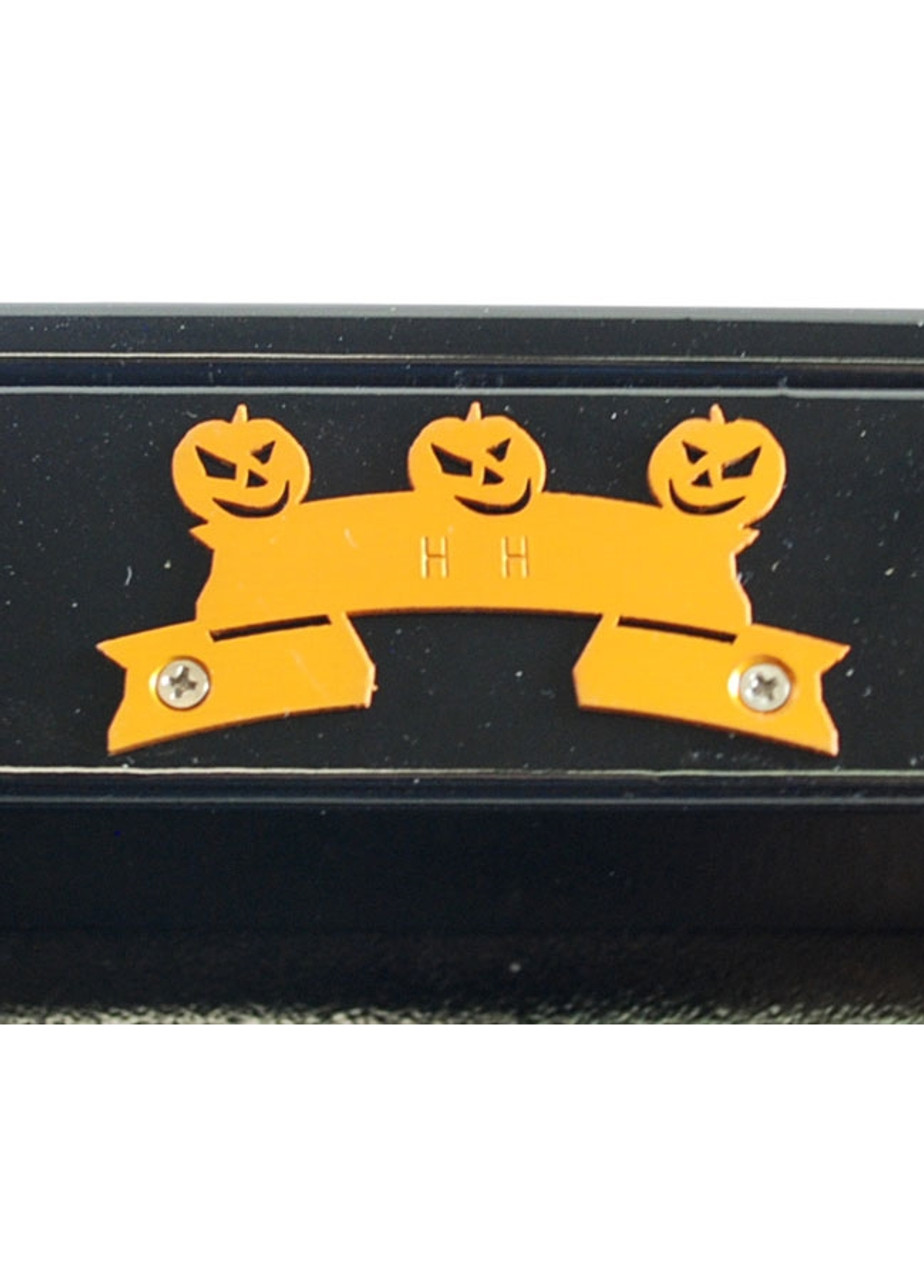 The front and back covers are Bradbury oil paintings of Halloween trees.

The dustjacket was designed by Bill Walker and Donn Albright.

This Lettered edition is full of bonus material: several previously unpublished Halloween poems and the previously unpublished short story “The Elevator” (a version was produced for the second incarnation of The Twilight Zone, but the script didn’t adhere to the story). Bradbury drew an original tipsheet drawing which appears in each edition, but on only the Lettered Edition will one find a Bradbury thumbprint on one of the pumpkins.

Table of Contents: Lettered Edition Only

The Lettered edition is housed in Gauntlet’s first metal tray-case, which includes a pop-up Halloween tree taken from Bradbury’s cover art (with pumpkins cut out and dangling like a wind-chime). Each tree is engraved with Bradbury’s signature. The chapbook, available only through Gauntlet is called “Fragments”. It contains fragments of 8 unfinished Bradbury short stories, compiled by Donn Albright and approved by Bradbury, dealing with the Halloween theme.

Some are just a paragraph or two, others are longer. Cover art by Bradbury. 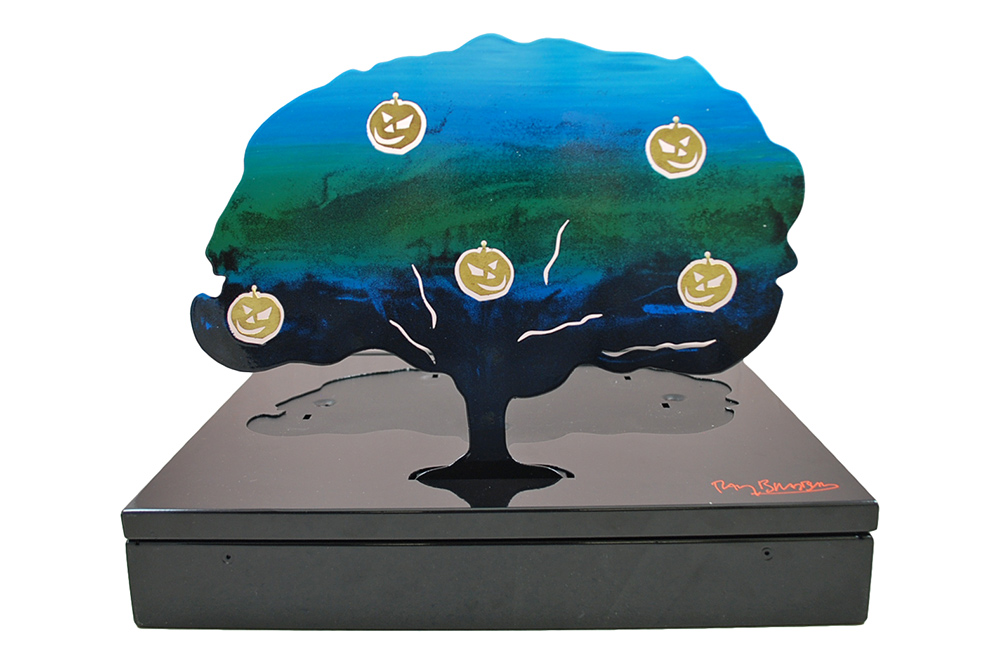 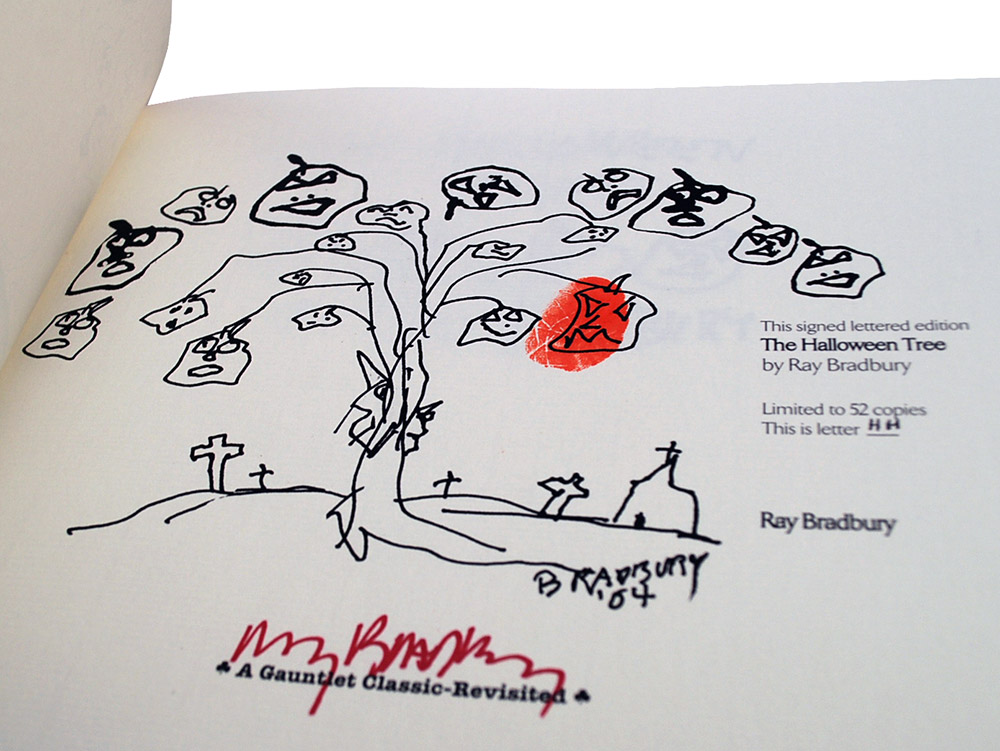 About The Halloween Tree

The Halloween Tree is a 1972 fantasy novel by American author Ray Bradbury, which traces the history of Samhain and Halloween. A group of eight boys set out to go trick-or-treating on Halloween, only to discover that a ninth friend, Pipkin, has been whisked away on a journey that could determine whether he lives or dies. Through the help of a mysterious character named Carapace Clavicle Moundshroud, they pursue their friend across time and space through Ancient Egyptian, Ancient Greek, and Ancient Roman cultures, Celtic Druidism, the Notre Dame Cathedral in Medieval Paris, and The Day of the Dead in Mexico. Along the way, they learn the origins of the holiday that they celebrate, and the role that the fear of death, ghosts, and the haunts has played in shaping civilization. The Halloween Tree itself, with its many branches laden with jack-o'-lanterns, serves as a metaphor for the historical confluence of these traditions. 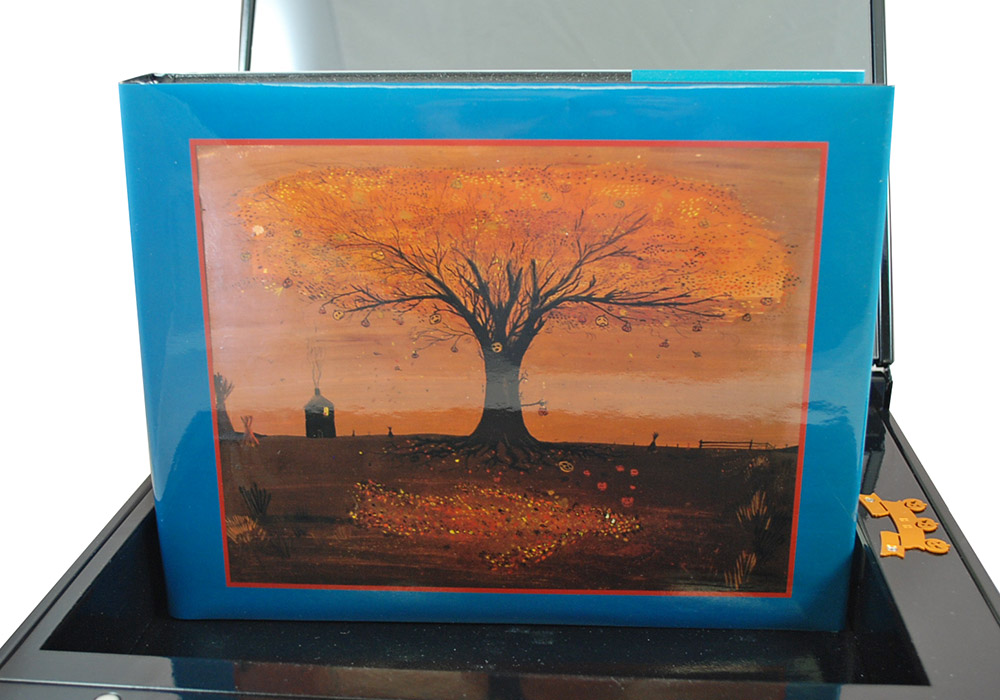 "If you want to know what Halloween is, or if you simply want an eerie adventure, take this mystery-history trip. You couldn't have a better guide than Ray Bradbury."--Boston Globe

"At last someone has written a book about Halloween that is tricky and scary, ghostly and windy, deathly and clammy" -- The Boston Globe

"A spectacular guide to the nether regions." -- Kirkus

"There is a great treat in Bradbury's frenetic imagery." -- The New York Times 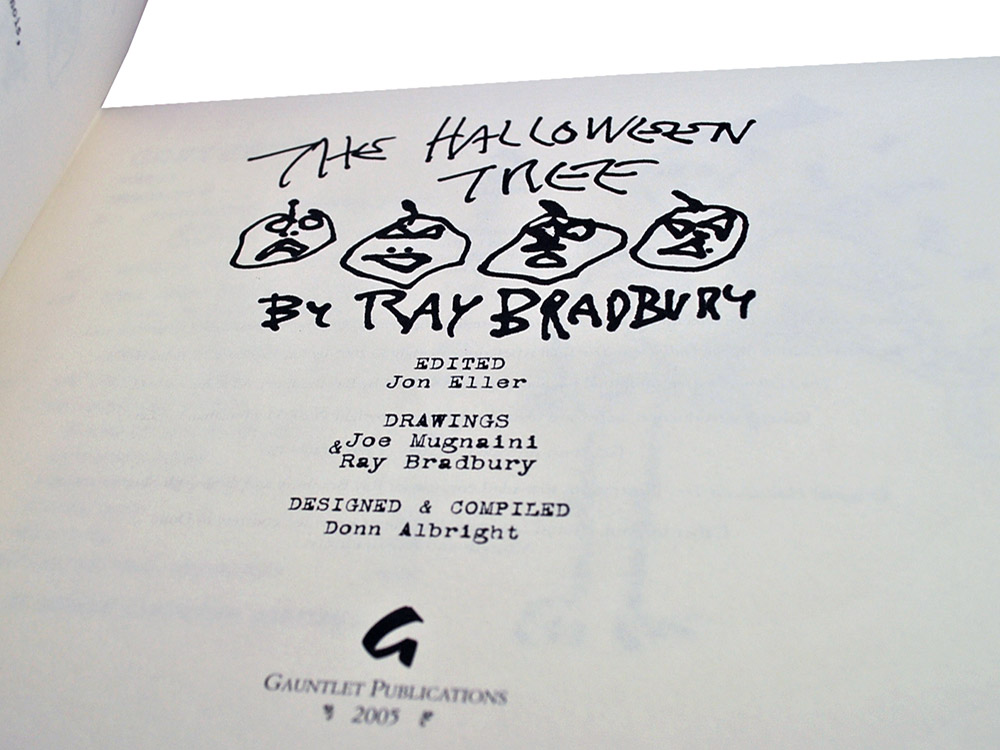 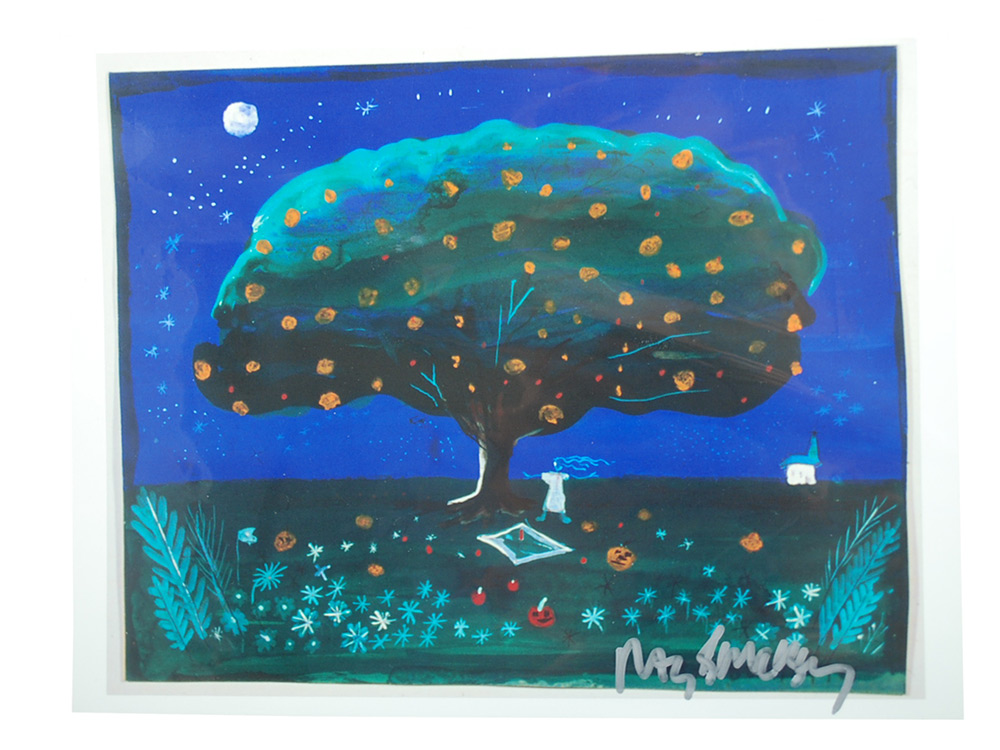 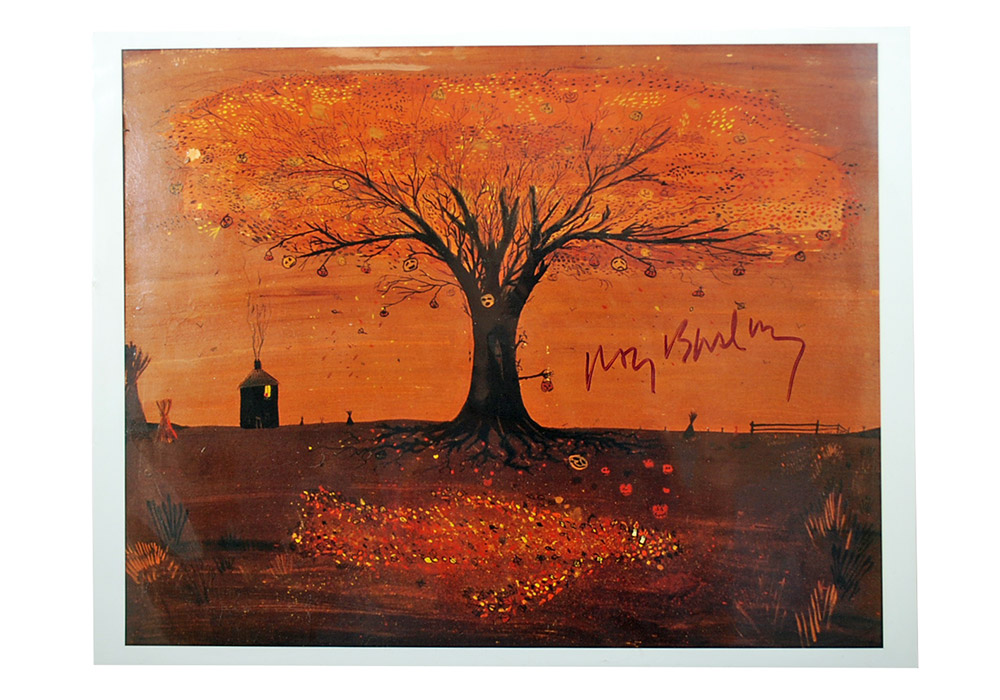 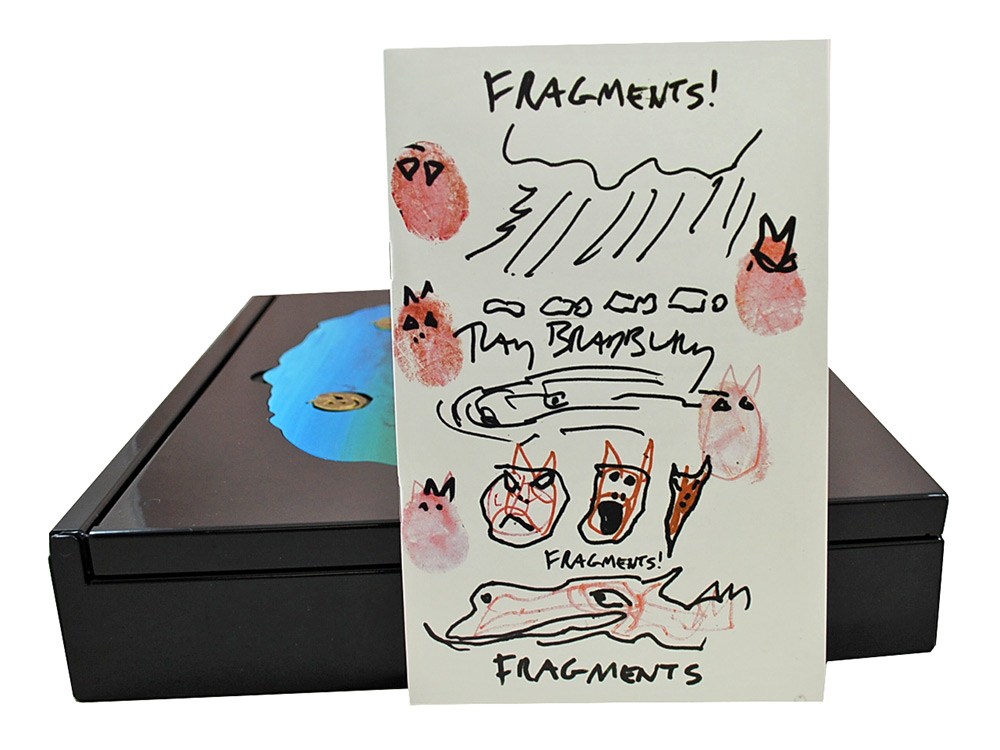 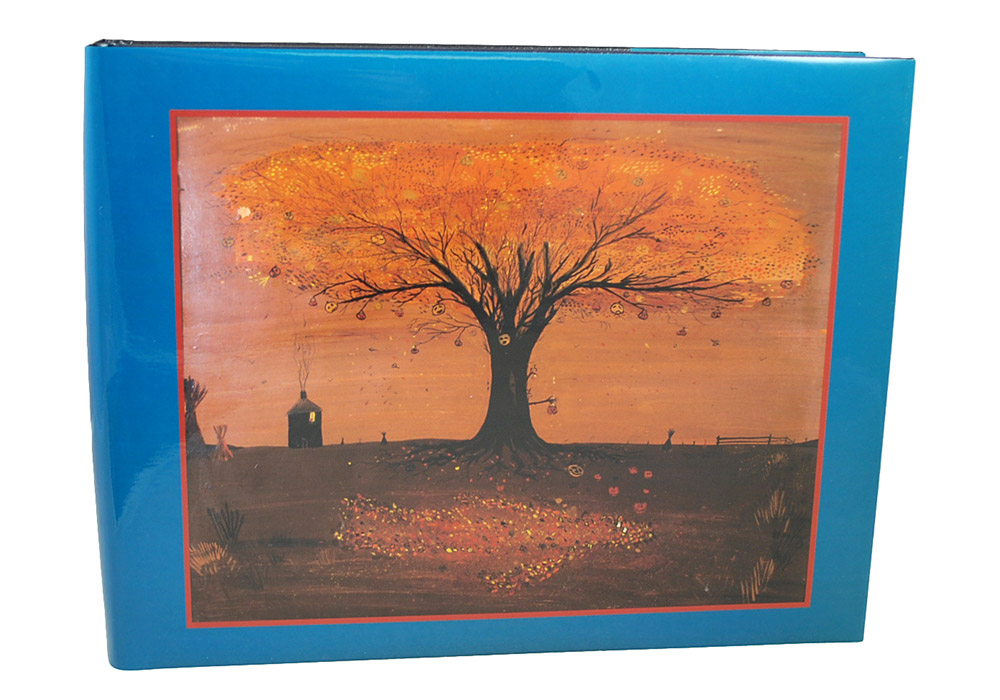 Lettered signed limited edition, 52 signed tray-cased copies, letter "HH."
VERY FINE GUARANTEED. A wonderful bright clean copy free of any markings, writings, or stamps. Sharp corners that have not been bumped. Unread book with square and tight binding. No bookplates attached or indication of any removed. Edges are free of any marks, spots, scratches, or blemishes. The dust-jacket is Very Fine with an archival acid-free Mylar sleeve.