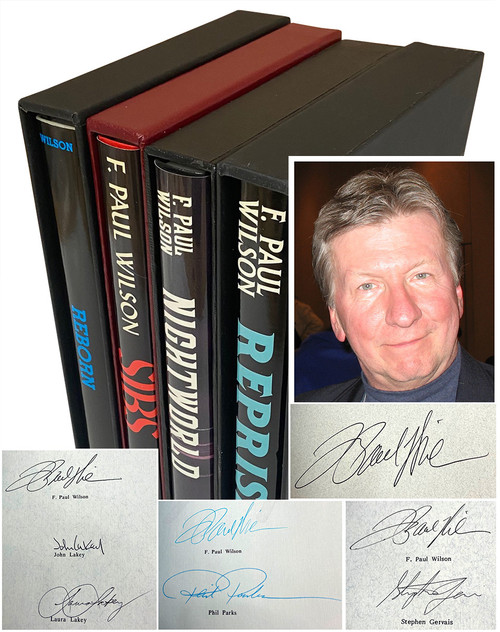 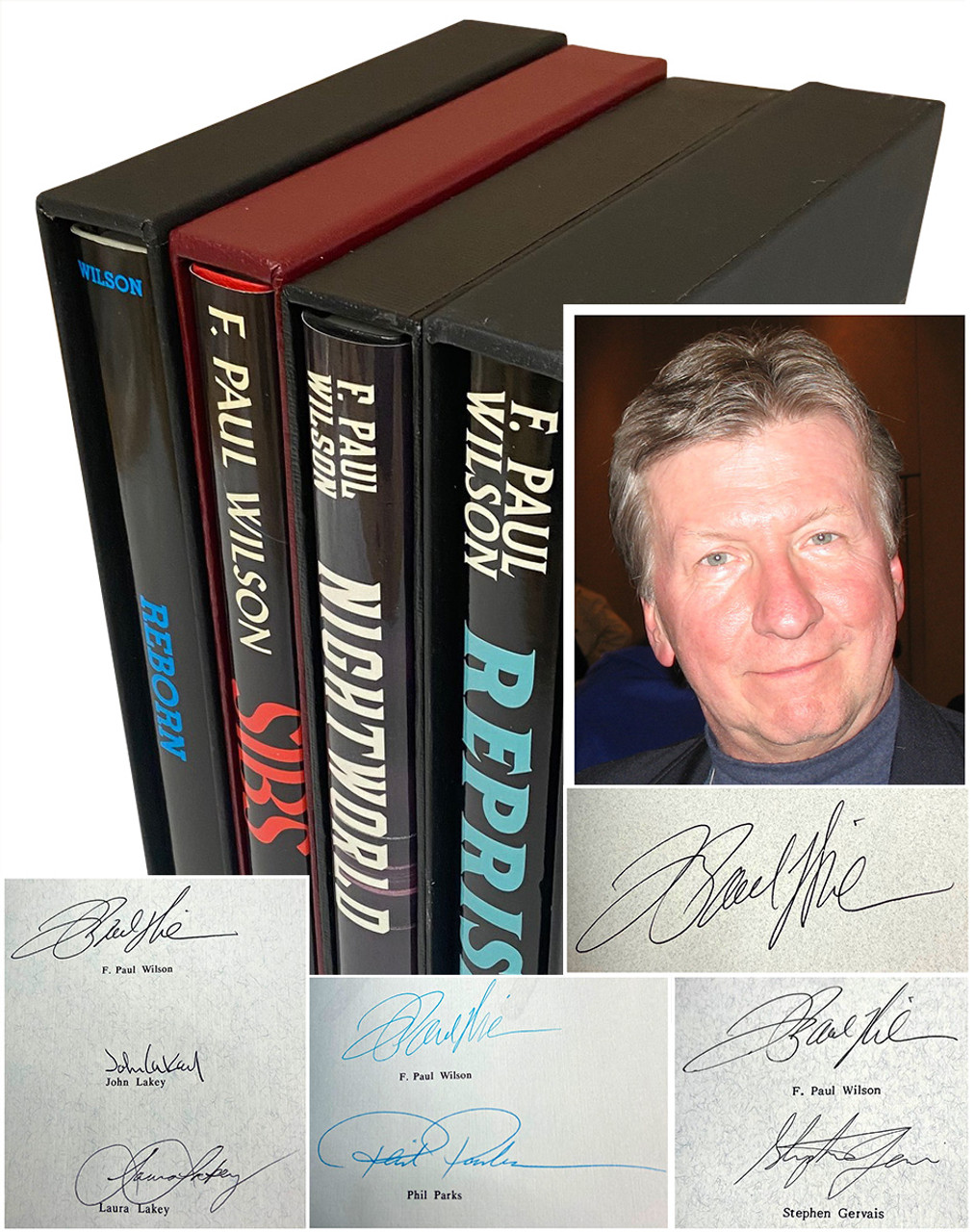 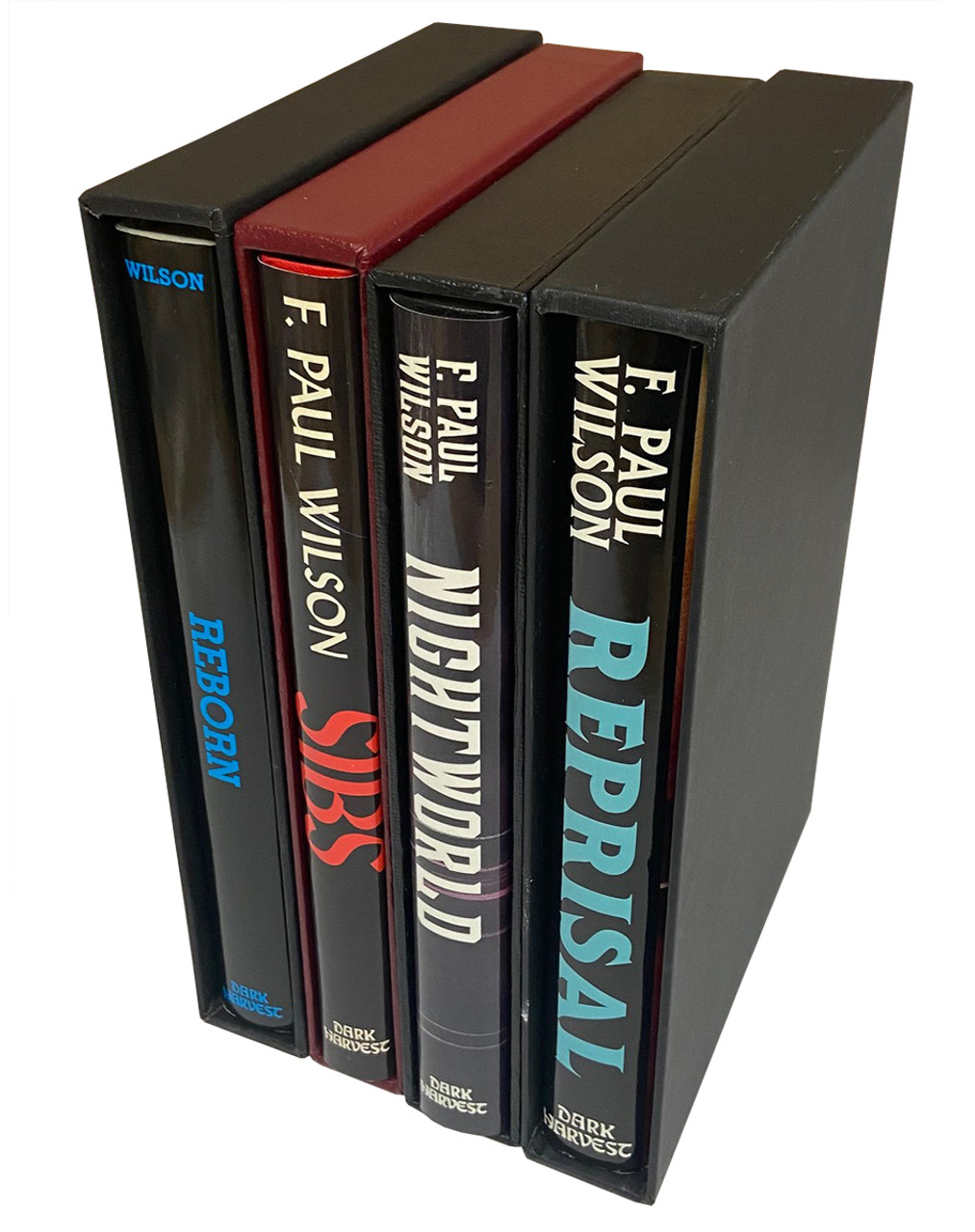 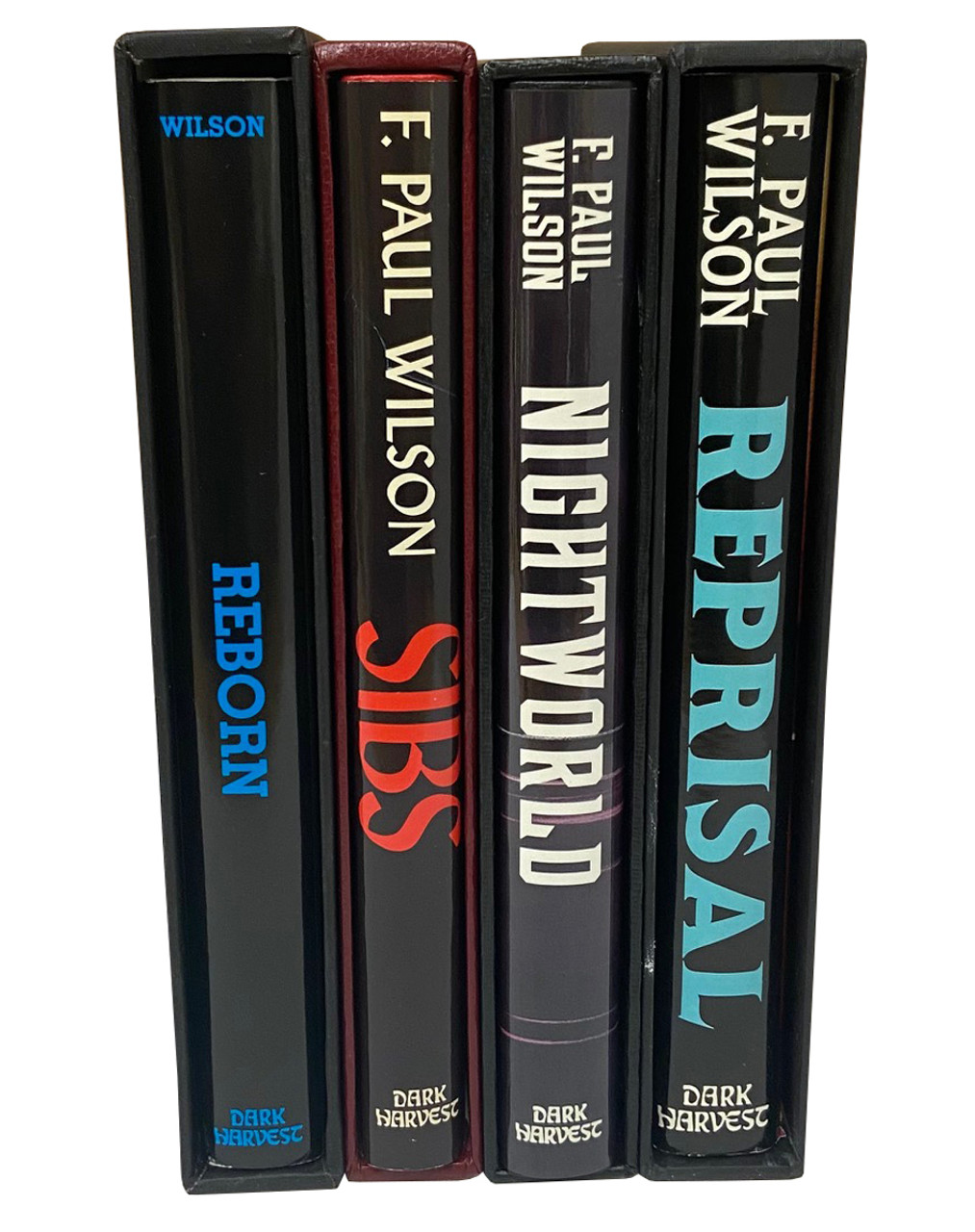 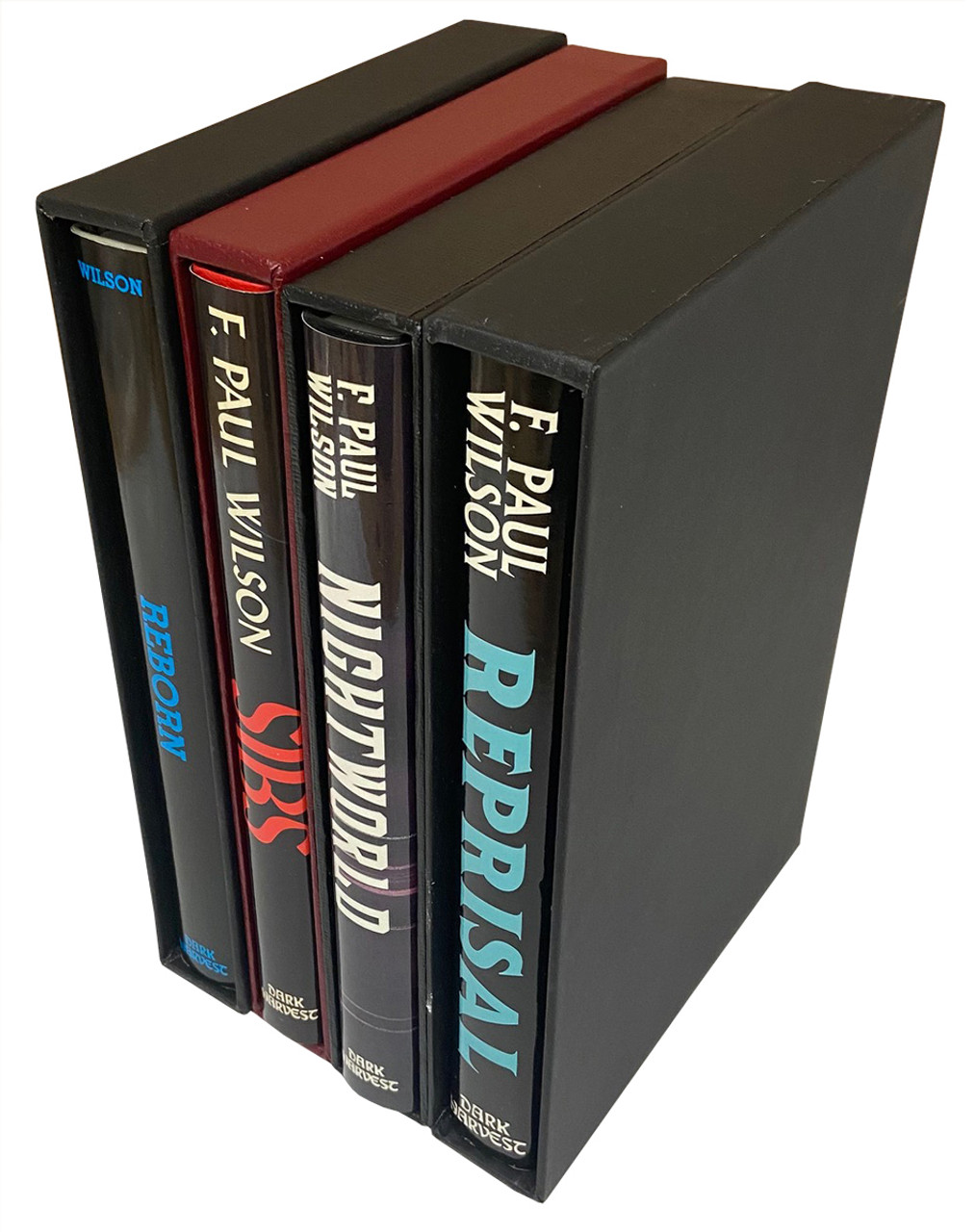 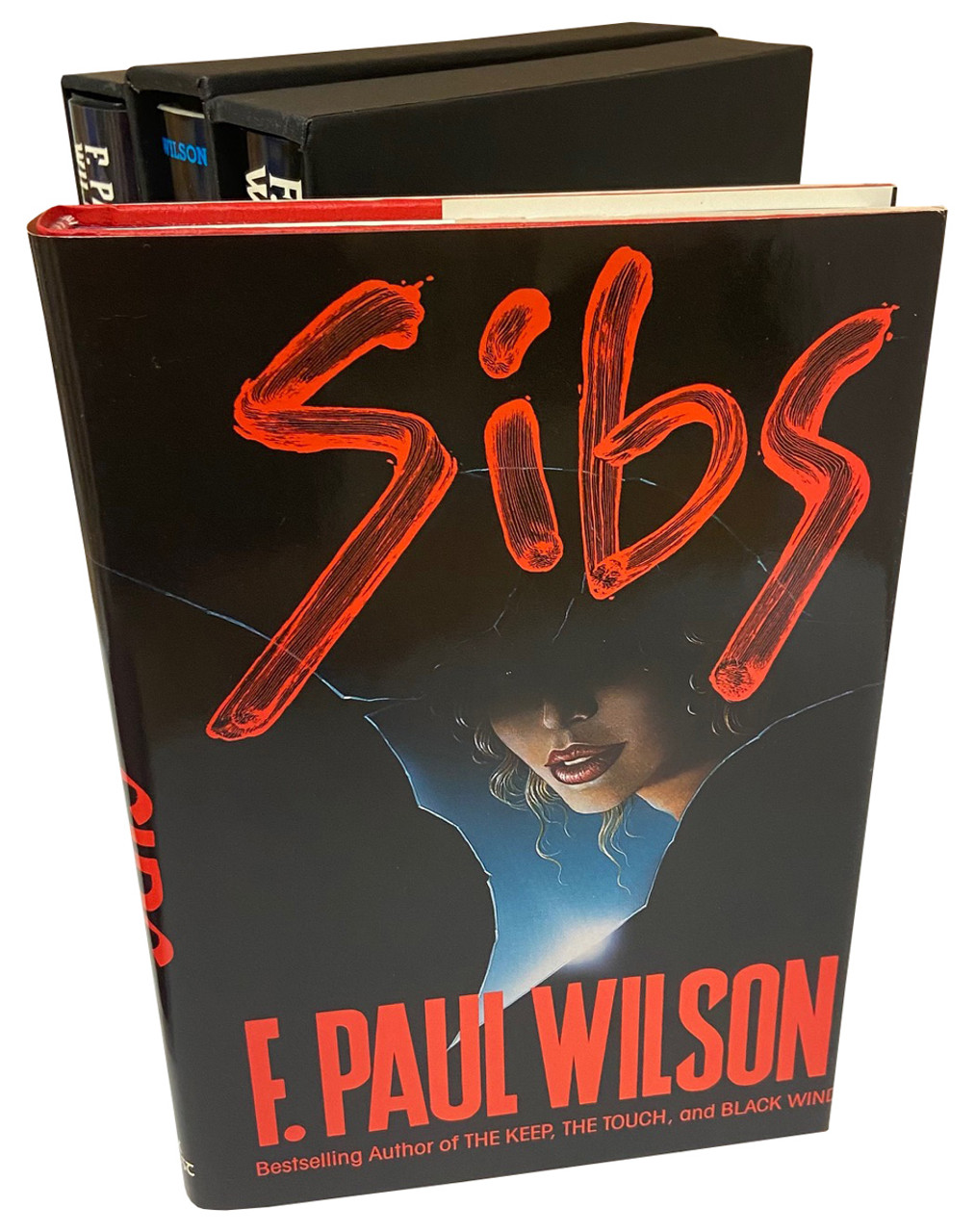 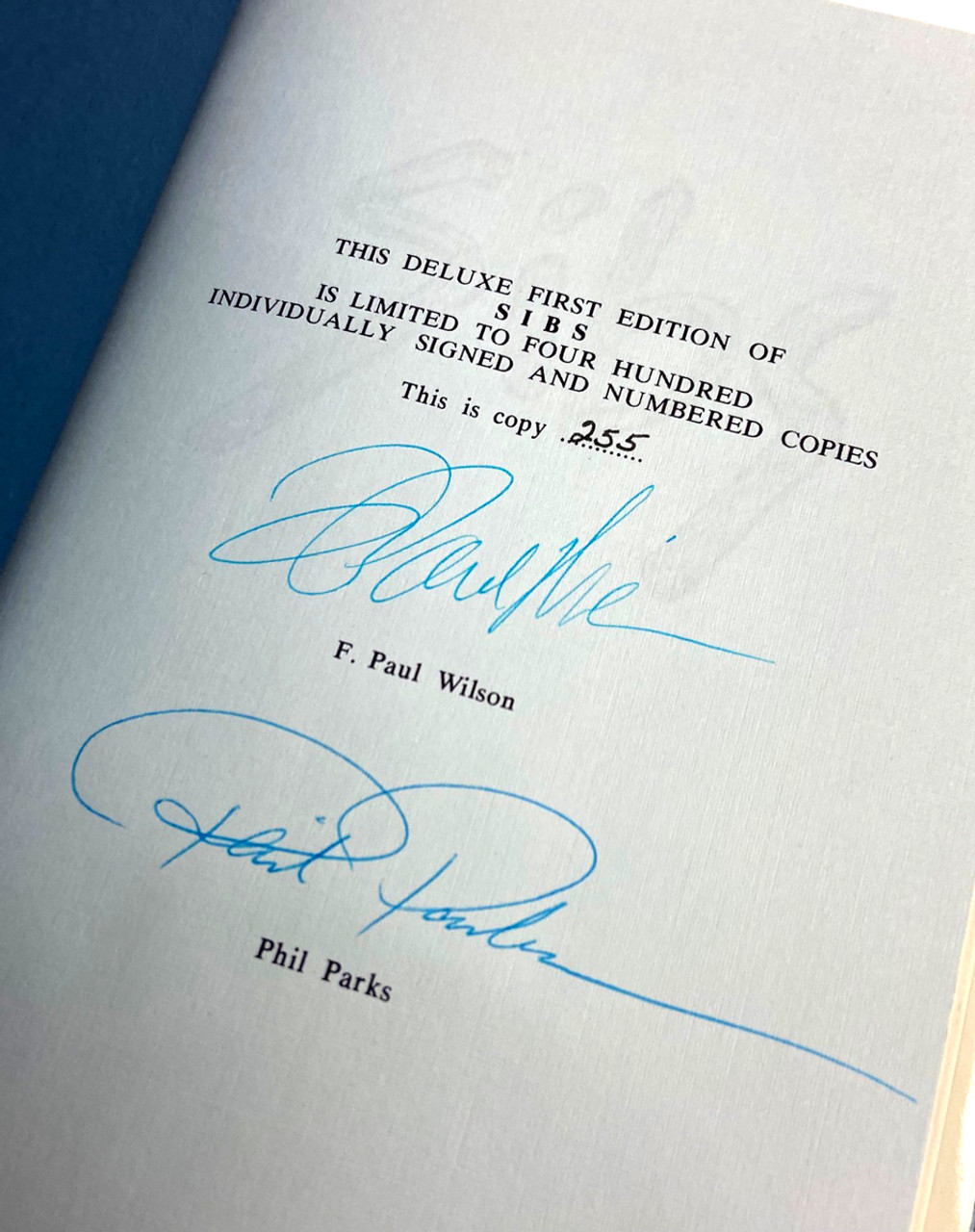 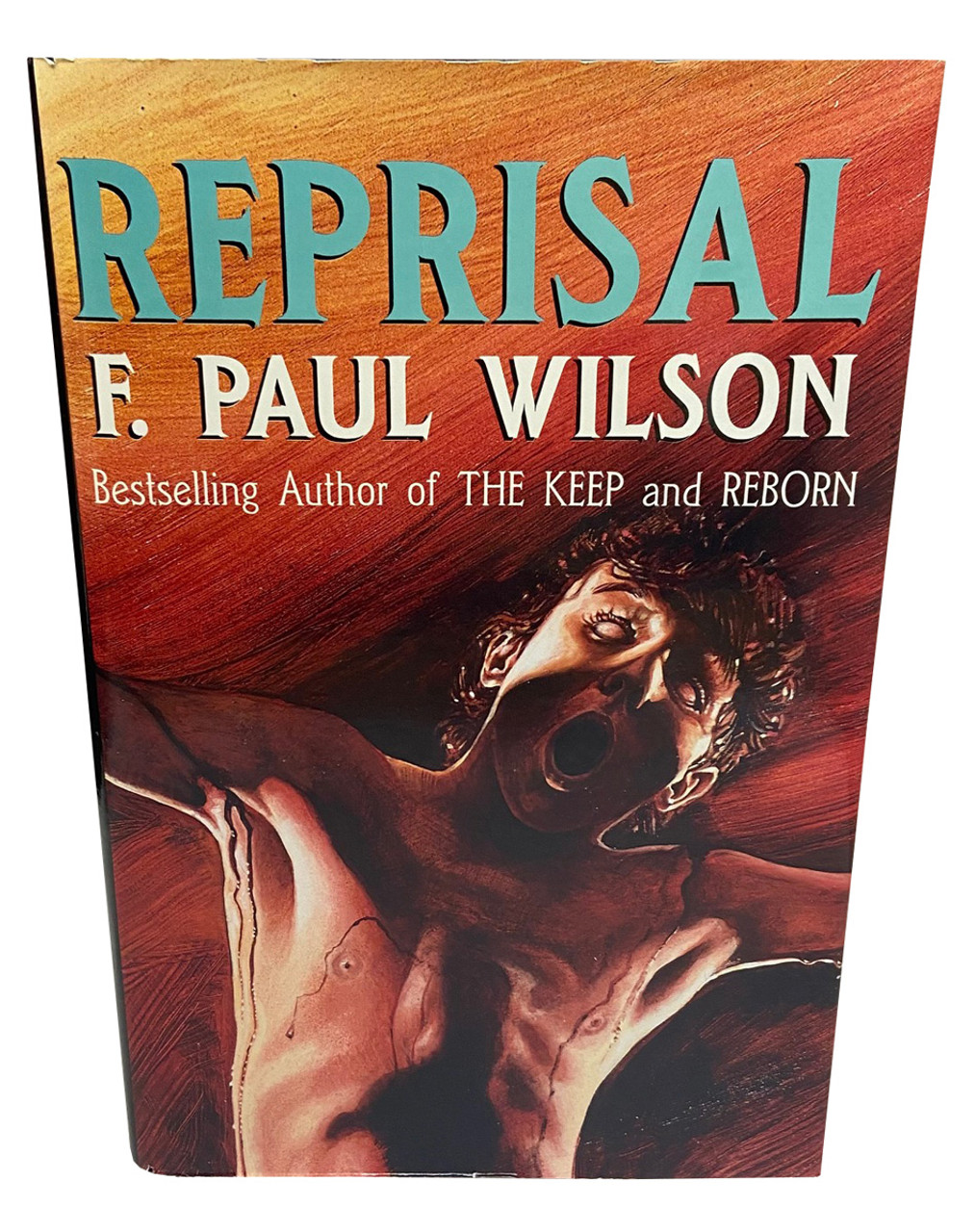 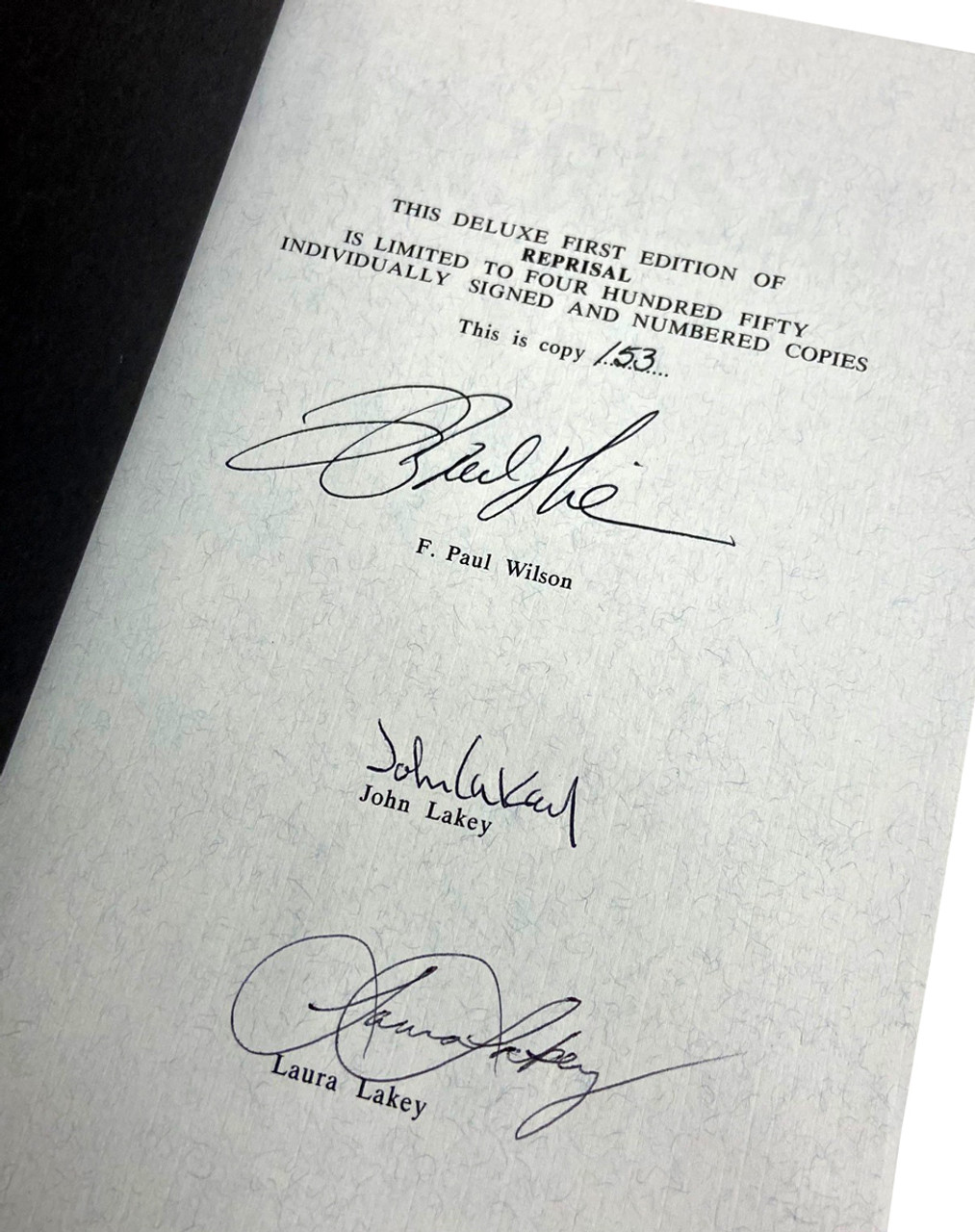 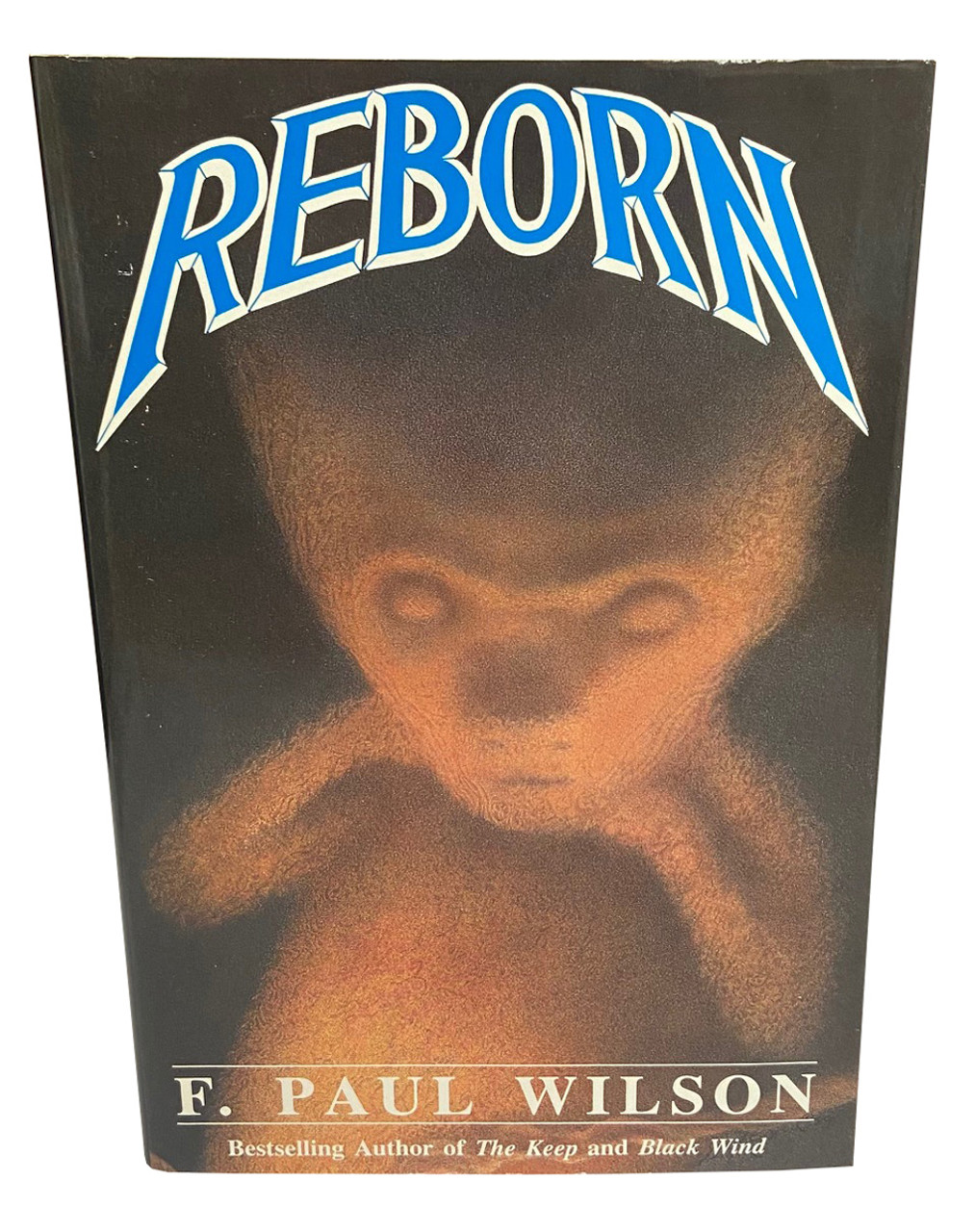 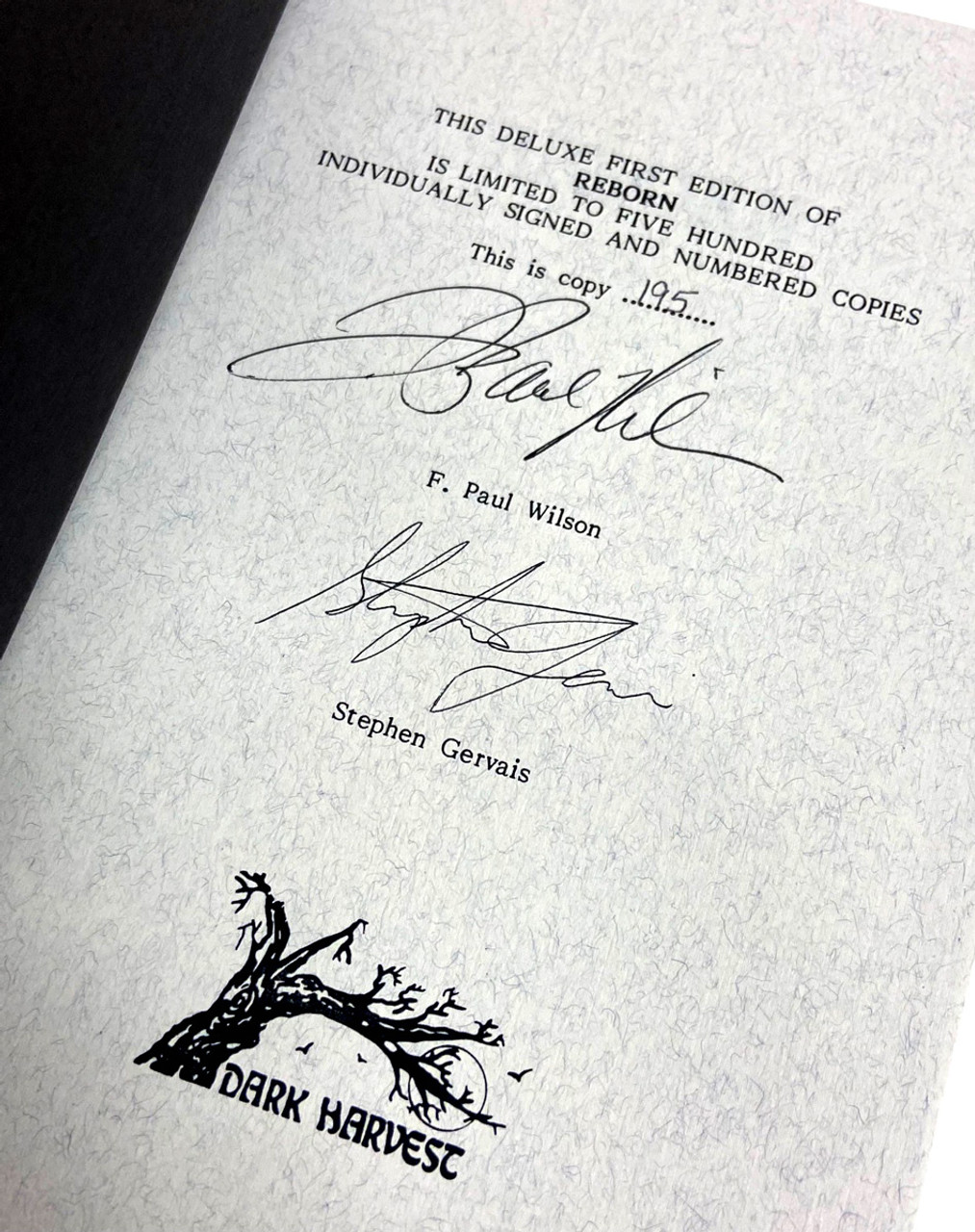 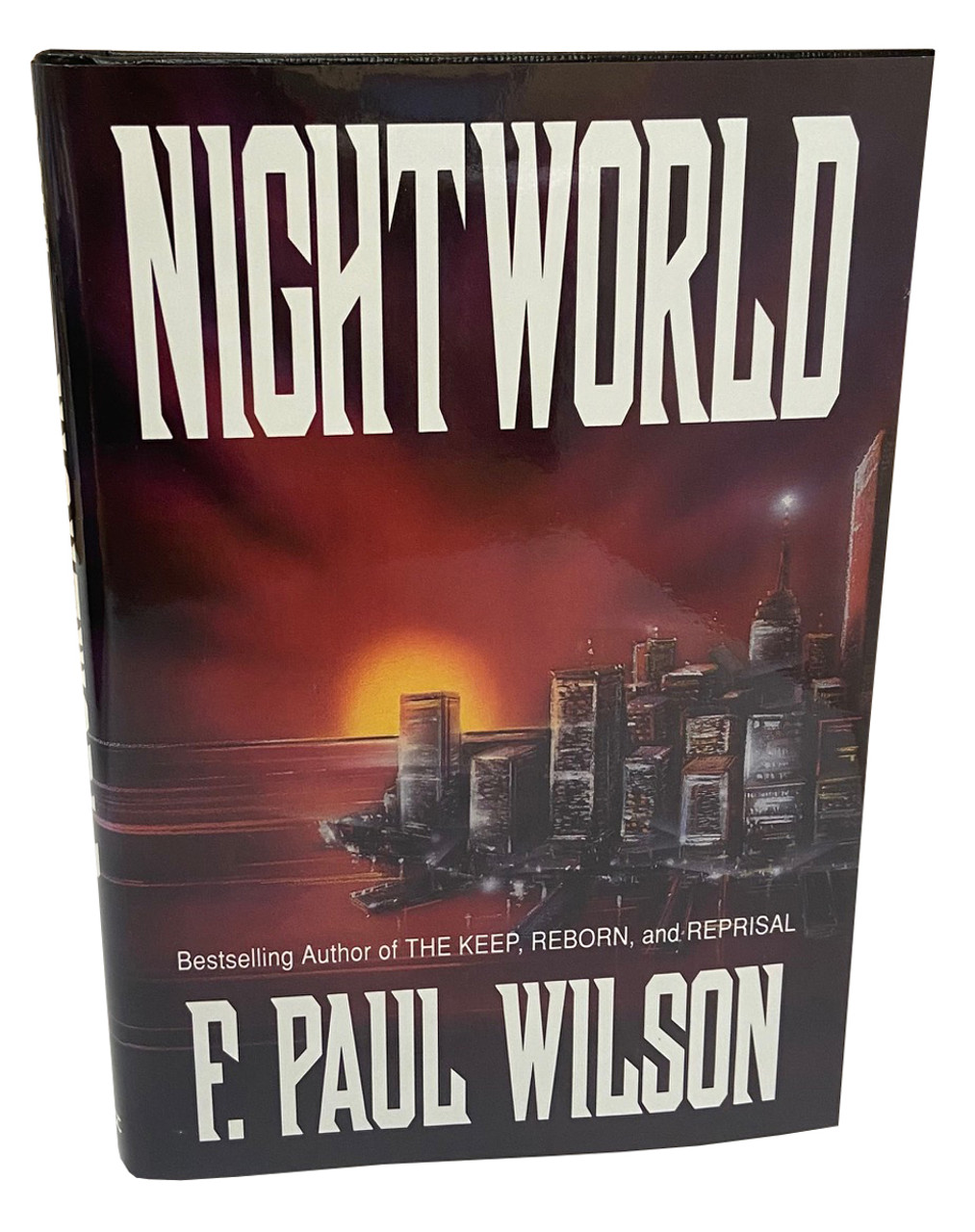 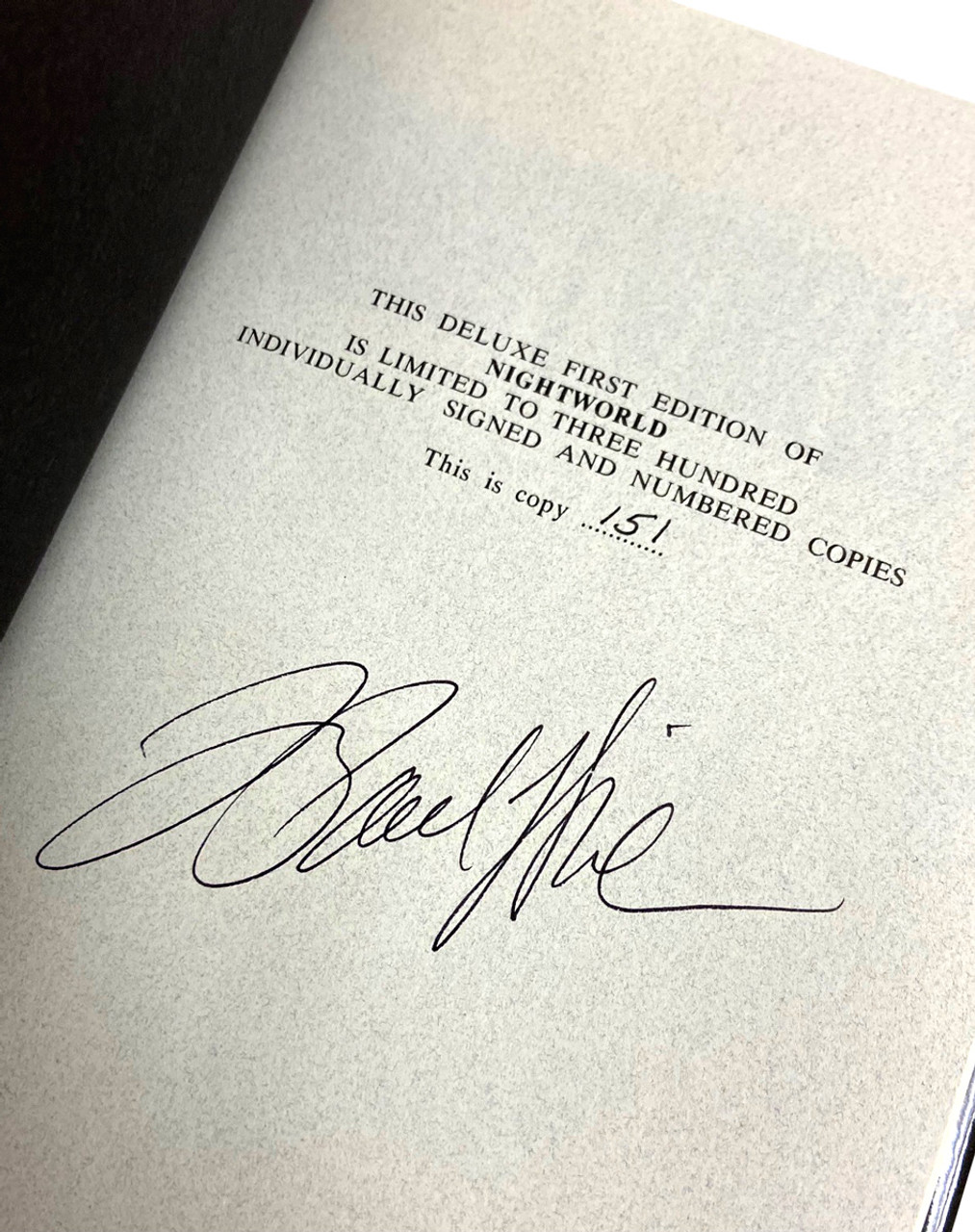 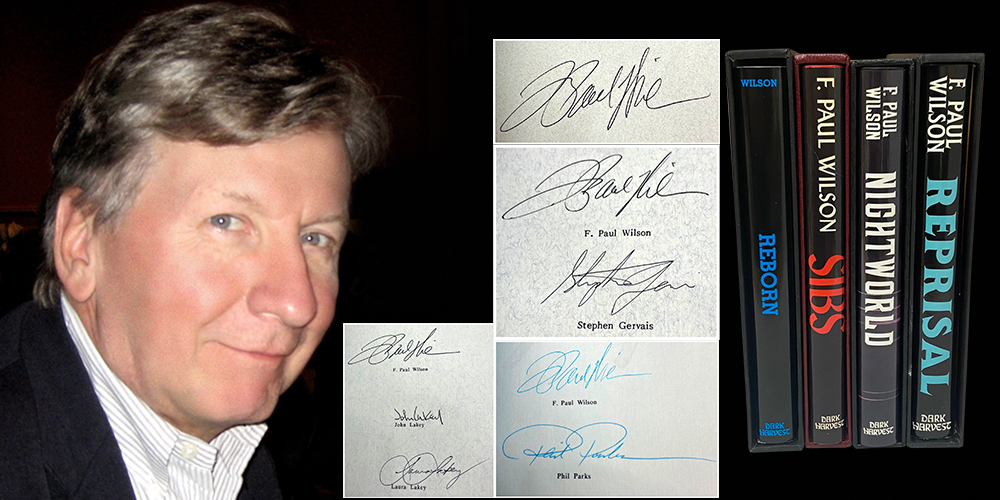 Dark Harvest Publishing. 1990-1992. F. Paul Wilson. "Reborn", "Reprisal", "SIBS", and "Nightworld" Signed Limited Edition 4-Vol. Set. Each volume is a slipcased signed limited edition, personally signed by the author F. Paul Wilson along with the illustrator.  Each volume is a First Edition as stated on the copyright page of the book.

4-Volume set in one shipment:

1. "Reborn" First Edition 1990. Signed Limited Edition No. 19 of 500 (Signed by F. Paul Wilson and Stephen Gervais) . Fine book in a NF+ dust-jacket (minor wear in one corner) and Fine slipcase.

Reborn is the fourth volume in a series of six novels known as The Adversary Cycle written by American author F. Paul Wilson. It was first published in March 1990 by Dark Harvest.

In 2009, a revised edition was published.

After vowing never to return, Kara Wade is back in New York City. She's come to claim the body of her twin sister Kelly, and to find out how she died. No secret as to the cause of death―a nearly nude, twelve-story plunge from a room in the Plaza Hotel―but Kara is determined to learn what led to that plunge.

Enlisting the help of an old lover, now an NYPD detective, Kara delves into her sister's life. Startling and bizarre facts begin to surface. Instead of answers, Kara finds more questions. Who was the stranger Kelly became during the months prior to her death? What was behind the perverse, decadent lifestyle she came to embrace so passionately?

This is the way the world ends…not with a bang but a scream in the dark.

It begins at dawn, when the sun rises late. Then the holes appear. The first forms in Central Park, in sight of an apartment where Repairman Jack and a man as old as time watch with growing dread. Gaping holes, bottomless and empty…until sundown, when the first unearthly, hungry creatures appear.

Nightworld brings F. Paul Wilson's Adversary Cycle and Repairman Jack saga to an apocalyptic finale as Jack and Glaeken search the Secret History to gather a ragtag army for a last stand against the Otherness and a hideously transformed Rasalom.

The bestselling supernatural thriller from horror author F. Paul Wilson, Reprisal is the fifth book in the Adversary Cycle

"Who am I? Why, I'm you. Or parts of you. The best parts. I'm the touch of Richard Speck, Ed Gein, John Wayne Gacy, Ted Bundy, and Bin Laden in all of you. I am the thousand tiny angers and fleeting rages of your day―at the car that cuts you off on the freeway, at the kid who sneaks ahead of you in line at the movies, at the old fart with the full basket in the eight-items-only express checkout at the supermarket. I'm the nasty glee in the name-callers and the long-suffering pain, the self-loathing, the smoldering resentment, the suppressed rage, and the never-to-be-fulfilled promises of revenge in their targets. I'm the daily business betrayals and the corporate men's room character assassinations. I'm the husband who beats his wife, the mother who scalds her child, I'm the playground beatings of your little boys, the backseat rapes of your daughters. I'm your rage toward a child molester and I'm the pederast's lust for your child, for his own child. I'm the guards' contempt for their prisoners and the prisoners' hatred for their guards, I'm the shank, I'm the truncheon, I'm the shiv. I'm the bayonet in the throat of the political dissident, the meat hook on which he is hung, the cattle prod that caresses his genitals. You've kept me alive, you've made me strong. I am you."

The immortal evil defeated in The Keep and reincarnated in Reborn has come of age and begun to settle scores. He targets a few unlucky individuals for destruction now, but soon the whole world will suffer. And he will feed on our tears and our pain.

Francis Paul Wilson (born May 17, 1946, in Jersey City, New Jersey) is an American author, primarily in the science fiction and horror genres, and a medical doctor.

F. Paul Wilson is the New York Times bestselling author of horror, adventure, medical thrillers, science fiction, and virtually everything in between. His books include the Repairman Jack novels—including Ground Zero, The Tomb, and Fatal Error—the Adversary cycle—including The Keep—and a young adult series featuring the teenage Jack. Wilson has won the Prometheus Award, the Bram Stoker Award, the Inkpot Award from the San Diego ComiCon, and the Lifetime Achievement Award of the Horror Writers of America, among other honors. He lives in Wall, New Jersey.